Started the day off thinking I would probably stop in Essex, just 42 miles away and about 1500 higher elevation than Columbia Falls. That would leave me with a 17-mile start the next morning to the top of the Continental Divide a further 1200 feet up, at 5200' (almost a mile above sea level). I just didn't think my legs, still sore from yesterday's century, would be able to carry me all the way to the top of the pass. However, I made a pact with myself: If I got to Essex by 3:00, and still felt OK, I'd go ahead and try it.

As it turns out, I hit Essex at 2:30 and didn't feel all that bad, so I pressed on. Two hours later, after 7 hours of climbing, I was at the top of Marias Pass. I did it! I climbed the Continental Divide. Here's a photo to prove it. 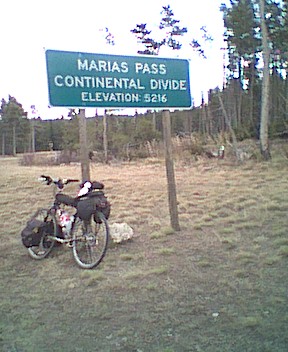 Up at the top there's a memorial to Teddy Roosevelt (who saw to it the road over the pass got built, and did a lot of other work in the Glacier National Park area) as well as several other historical markers, so I spent a few minutes at those and then moved on. I expected to stop in East Glacier, about 11 miles further down the road, but now I had a huge tailwind and was heading downhill, so I couldn't seem to stop. I always try to milk any tailwind for all it's worth (you never know, it might not be there tomorrow) so I just headed east until I ran out of light. That turned out to be Cut Bank at 118 miles for the day (the first half of which were uphill). If I'd had more time, I would have tried to make it to Shelby.

I'm officially out of the mountains now, so from this point on I'm at the mercy of the winds. Anything from the west and I cruise a long way, but if I get headwinds I'll stop early. Tomorrow might be 120 miles, or it might be only 60. We'll see.

Here's one of the many views I had while climbing up to the top of Marias Pass: 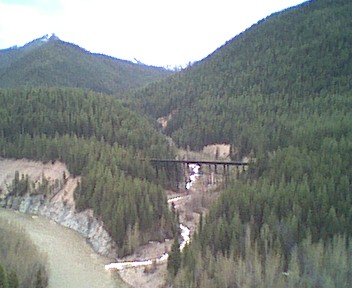 This photo is one of the last views I had before leaving the Rockies, and one of the better ones, I think. 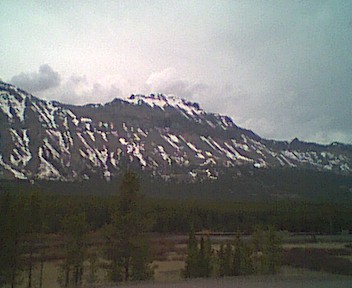 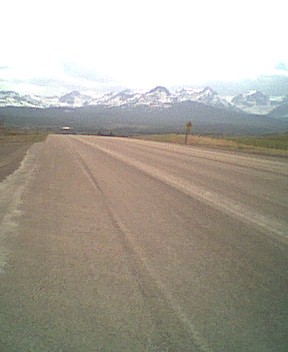 Half an hour after the previous picture was taken, the Rockies had faded into a gray shadow on the horizon. Hopefully, I won't have any more mountains to cross this trip.

By the way, as of today, I'm one-fourth of the way to the coast!