This was my longest ride yet, but not as bad as you might think. The tailwind was back, although it was a bit late showing up, and carried me into Havre (pronounced "haver") about an hour before dark. Only ten and a half hours of riding today...hardly the longest so far. I would have gone on except it was overcast and starting to rain, and the next town with a hotel was over 20 miles away. Riding at dusk in a steady rain with gusty winds on a narrow shoulder is not a good plan. Besides, the Circle Inn I wound up in is a great little hotel, less than $30 and with more stuff than you'd find in a Holiday Inn. When was the last time you had a stove, microwave and fridge in one of those expensive places? You'd think if a cheap spot like this could have them, so could your high priced hotels...but noooooo...and they even have the nerve to charge you for local calls! Sigh.

Anyway, not much in the way of pictures today. I'm in the high plains, a regular high plains drifter, and there's not much to see. Some examples of the thrilling scenery: 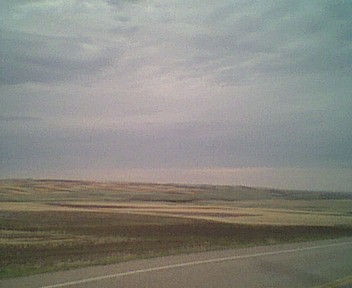 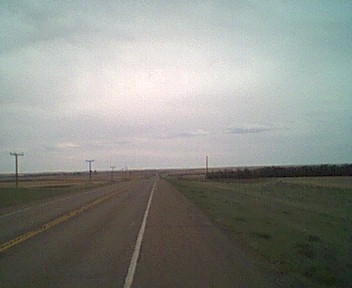 Hmmm, I guess I have a couple more weeks of this sort of stuff to look forward to, hmm?

10. Hoping your next night's hotel gets the WB so you don't miss this week's Buffy*

9. Discovering new places on your body where you can get a rash

8. The interesting local accents people use when shouting at you from passing cars

6. Learning new skills, like how to identify roadkill by scent before you even see it

5. Practicing your balance in 20-mph crosswinds when 18-wheelers blow past you at 60 miles per hour

4. Trying to figure out which part of your body hurts the most: hands, legs, neck, back, or butt

3. That look on someone's face when you tell them where you're heading

2. The hot shower at the end of every day