Still can't seem to feel well in the morning. If this goes on every day, it's going to get real old.

Anyway, started out slowly and meandered down the Columbia River for a bit, then turned east...right into a 2200-foot, 7-mile climb that took almost 4 hours and all the energy I had. If there hadn't been a gas station with a food mart at the top, I would probably have collapsed. As it was, I spent an hour recovering and (eventually) eating lunch.

After that, I cruised along. The wind was from the west, which was perfect, and the terrain flat or gently rolling. The only exception was a deep drop into a canyon, followed by a 5-mile climb out of it. Fortunately this wasn't as steep as this morning's run, or I might never have made it. By this point I was all but exhausted, and more than happy to stop in Coulee City for the night. (I seem to have a way of picking the towns with the strangest names to stop in.)

After some reflecting on the situation, it occurs to me that the real difficulty with this ride has been hauling the trailer and all that camping gear (which I haven't used yet). On the first day, without the trailer, I sailed along even though the day was mostly uphill. Since then things have been unusually tough. I dread nearly every climb, no matter how short, and the long ones are sheer torture. In point of fact, if I cannot get rid of the trailer and all that weight, I'll have to quit the ride. So, tomorrow I'm going to find a place to pack it up and ship it home. To avoid camping, I'm going to locate hotels along the route and make reservations several days in advance of my arrival. This will mean I can probably shed 40-50 pounds of stuff, and maybe I'll have a shot at finishing this things after all.

Today, I only have a couple of photos, both from the death climb this morning. After that everything was high desert, very boring. Hopefully I'll catch something more interesting tomorrow on the way to Spokane.

I climbed this?? I really must be crazy... 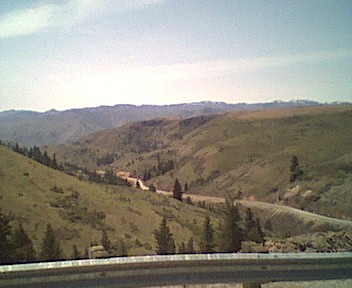