Yet another lousy morning...I guess this will be the pattern, very slow mornings followed by excellent afternoons, once I've had lunch. Perhaps after another week my body will be used to this constant exercise business.

Rode over rolling hills most of the day, following rivers along the east side of Washington and into Idaho. I figured I'd take a photo of the "Welcome to Idaho" sign, but there wasn't one. Only the change of the mile markers from 300+ to 1 proved I had crossed the state line. Perhaps the sign just got knocked over or something, I don't know, but I was looking forward to that photo.

Near the end of the day, came to a really nasty construction site, where I lost about half an hour making it through, and wound up with a muddy bike as well. They had wet down the road and dirt to keep it from putting up clouds of dust, and the result was a very dirty bicycle and cyclist. The shower after the ride was more than welcome, and I'll be doing laundry tonight as well (second time this trip). Fortunately, the Motel 6 I found has laundry services. In fact, it has just about everything, including a spa with jacuzzi, magazines to read, continental breakfast in the morning (if I feel up to it), free local calls (try to find that in a hotel any more), built in data ports in the room, cable with HBO, and more. All this for only $32 with my AAA discount! By far the best Motel 6 I've ever been in. Makes me wish I could find more of them along the route, but there's only one more between here and Minnesota. In fact, I doubt I'll see another "chain" hotel until I get to Minot.

Also, today was something of a landmark since I managed to get out of Washington at last (plus I've never even been in Idaho, much less biked here before). I even managed to get through the state without getting rained on! I also crossed the 500 mile mark for the entire trip, and finished off the first official week of riding. If I continue to ride at this rate, I'll finish in about 6 weeks and 2 days, total. We'll see how well that estimate works out come the middle of June.

OK, enough blathering, here are the pictures for today. The first one is some of the last terrain I saw before leaving Washington. 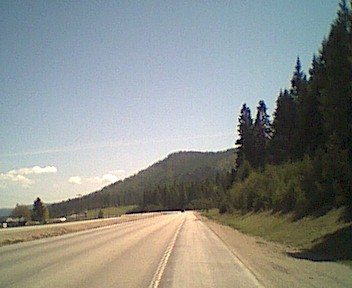 This was a hydroelectric dam on the Pend Oreille River after I crossed into Idaho: 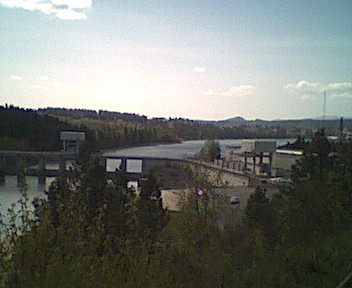 Finally, here are a couple of the better views I had while cruising along in Idaho: 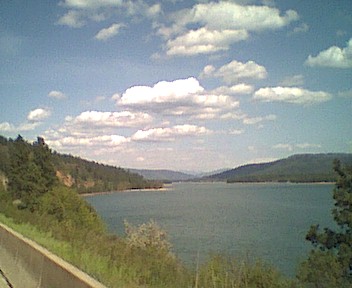 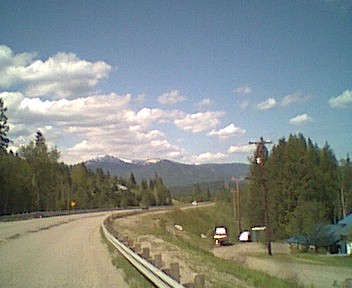