Woke up tired with aching legs and spent some time debating whether or not to proceed today, the other option being to take a ferry over to Victoria, BC (Canada) and ride around there a bit before returning. The weather was going to be too nice to just waste the day, though, and besides, I couldn't really find anything interesting to do on a bike. You can't ride around the island in one day, and riding around town didn't really sound that interesting. Plus, by the time I got moving, I'd missed the ferry I wanted to get on anyway, so I just took off. According to the map I had, there were going to be some terribly bad hills to climb in the first 25 miles or so, then the roads would open up and be relatively flat the rest of the day. I figured I could handle that.

Leaving town, I snapped this shot of the actual port, which was lined with a street full of nice little shops. Somewhere in there was a bike store, I knew from looking at the yellow pages the day before, but the need wasn't urgent so I didn't look too hard. This was a mistake I'd regret later, but first, on to some pictures from the early part of the ride. 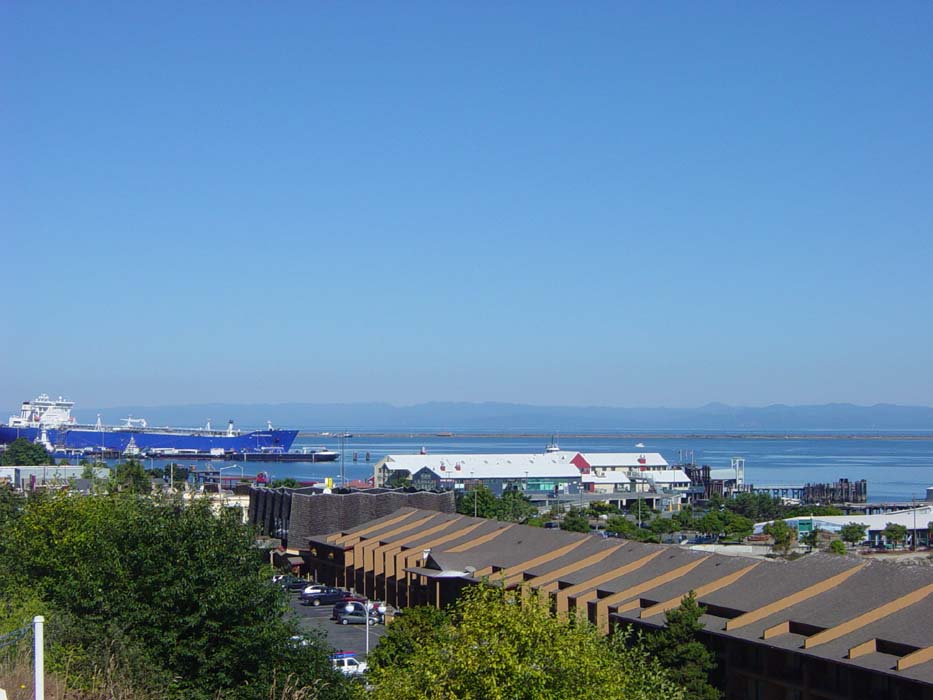 After leaving Port Angeles, the route headed inland, away from the coast. I won't see the ocean again for several days. Any water you see from this point forward is inland lakes.

Anyway, first I had to climb out of town, then navigate a moderate (1-mile) hill, making the first 5 miles of the trip fairly challenging. Here's a shot looking at the descent that followed: 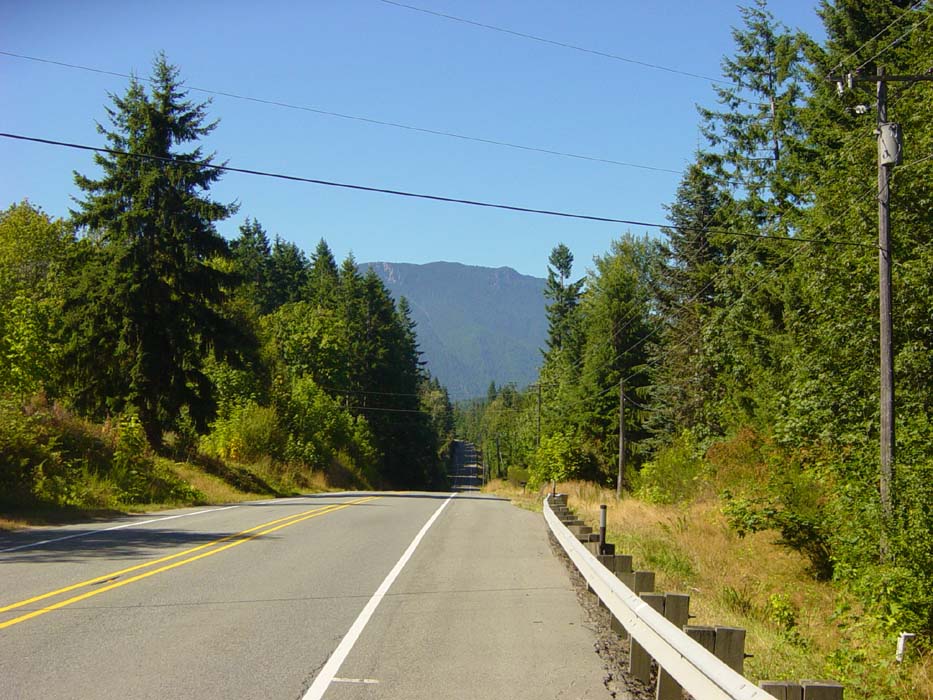 A few miles later I hit the big hill of the morning, a 2.5-mile monster with a lot of twists and turns as well as pullouts for slow-moving vehicles. Every time I came to one of these, I would swing wide, all the way to the edge of the guardrail, just in case some truck or RV decided to pull off the road next to me. The advantage of this was not only did I get a few moments to catch my breath, but also there were occasional scenic views through the trees, sort of like this one here: 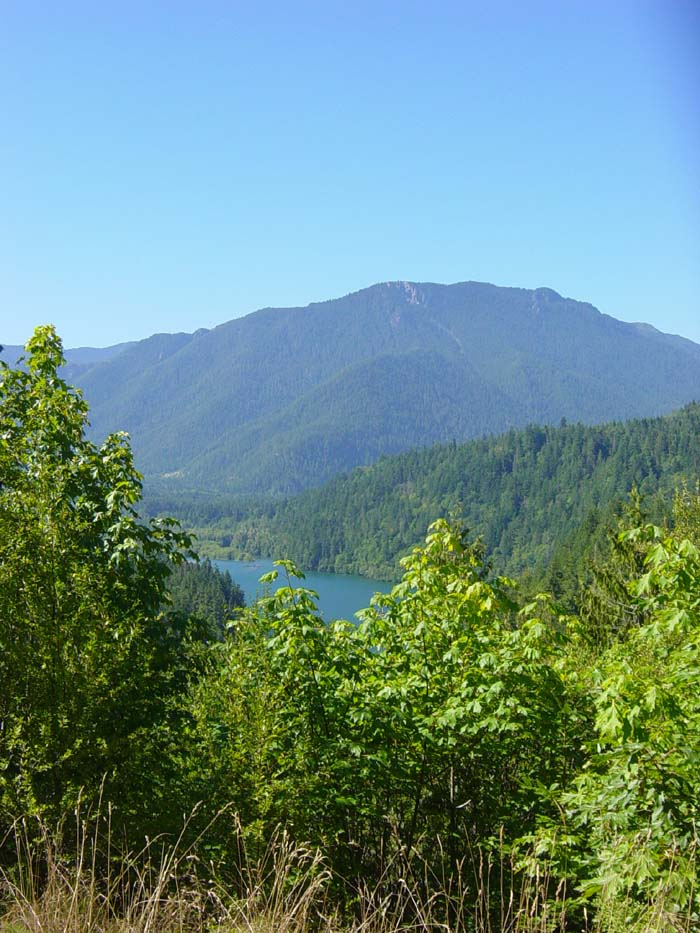 This is looking back at the road from the same pullout as the previous photo: 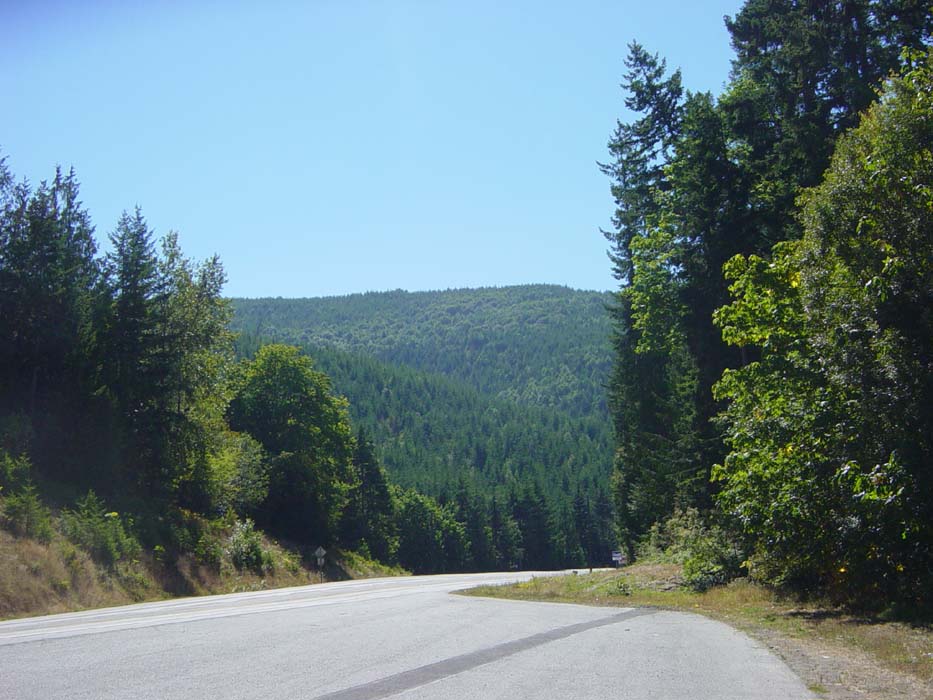 Pressing on, the road flattened out for a while, then did another sharp descent followed by a hill, at the top of which I was confronted with this sign. Trust me, this is the sort of sign you do NOT want to see when you're on a bike. 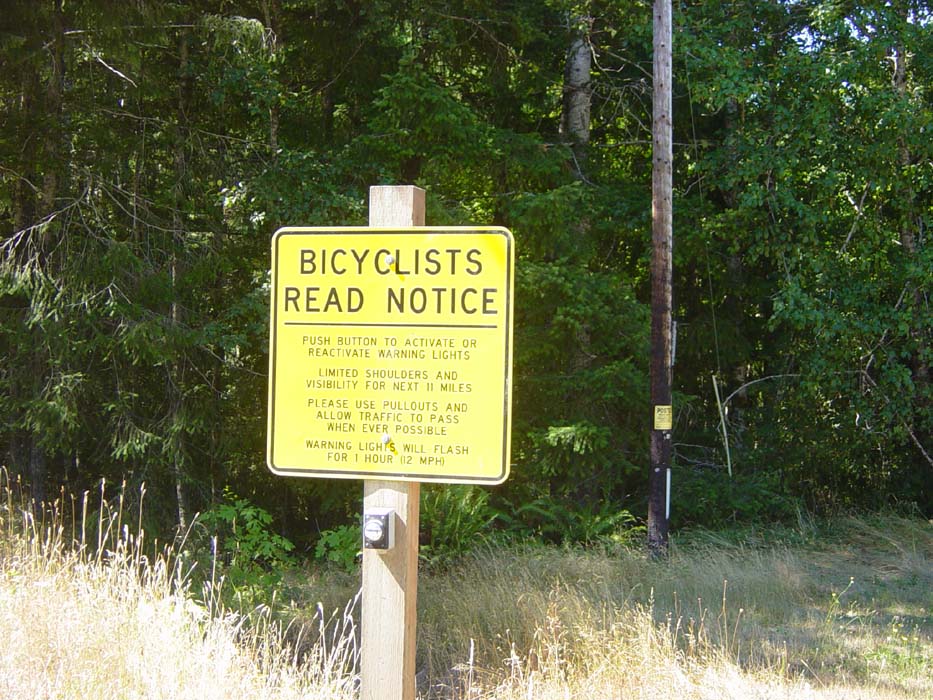 This worried me quite a bit, seeing as trucks and RVs had been barreling past me all day. Now I'm not going to have a shoulder and there will be limited visibility? Wonderful. At least there's a flashing light to warn them I'm here, right? So I pushed the button, and rode on. Here's the sign with the flashing lights, but as I found out later, it was the only one, and who's going to remember 10 minutes later that there was a bicyclist light flashing? Especially considering the scenery. 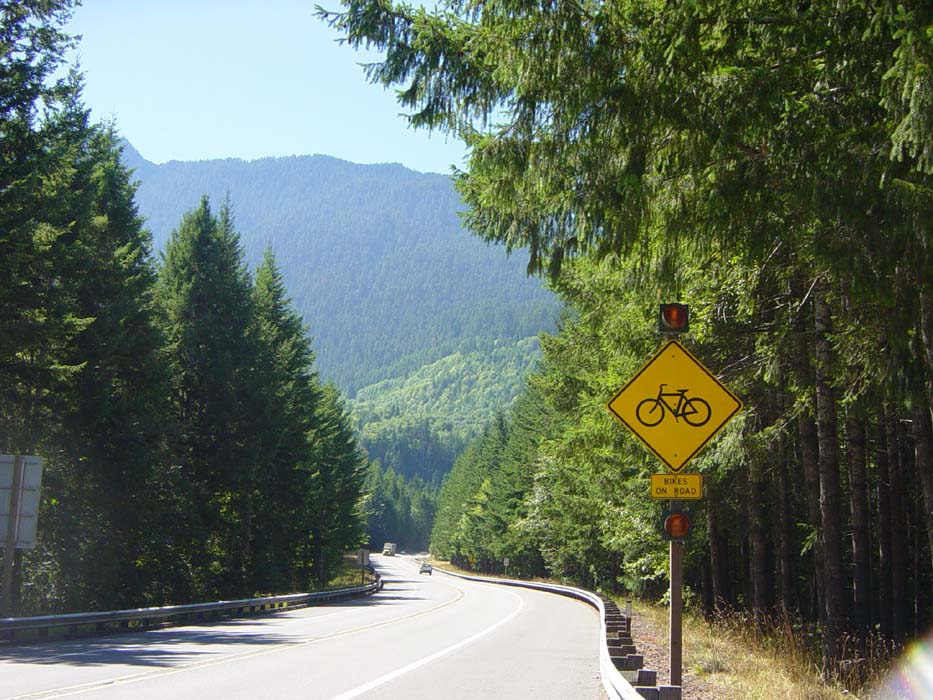 Speaking of scenery, here's some of what I'm talking about. This photo was taken at another one of those pullouts, where I had just enough room to take a picture. 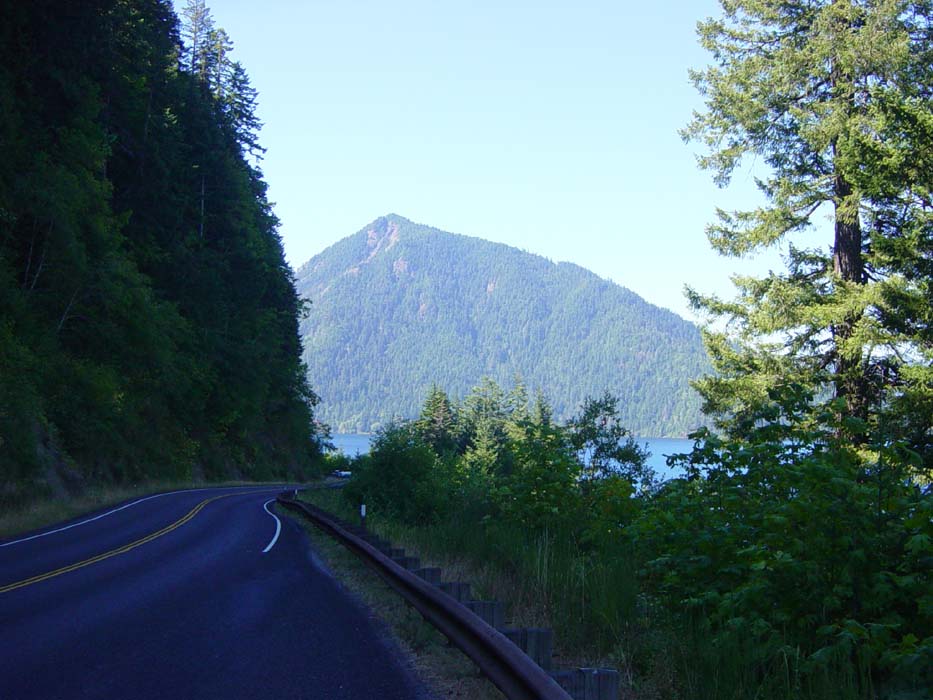 The road here wound around Crescent Lake, which was formed long ago by glaciers (or so the historical marker told me). Here's one of the nice views I got treated to while fearing for my life on the narrow, bumpy, shoulderless road:

Now here's where the fun begins. While sitting at this spot replacing the batteries in my digital camera, there was suddenly a loud BANG from the area of my bike. It sounded exactly like a gunshot, but here's what actually happened: 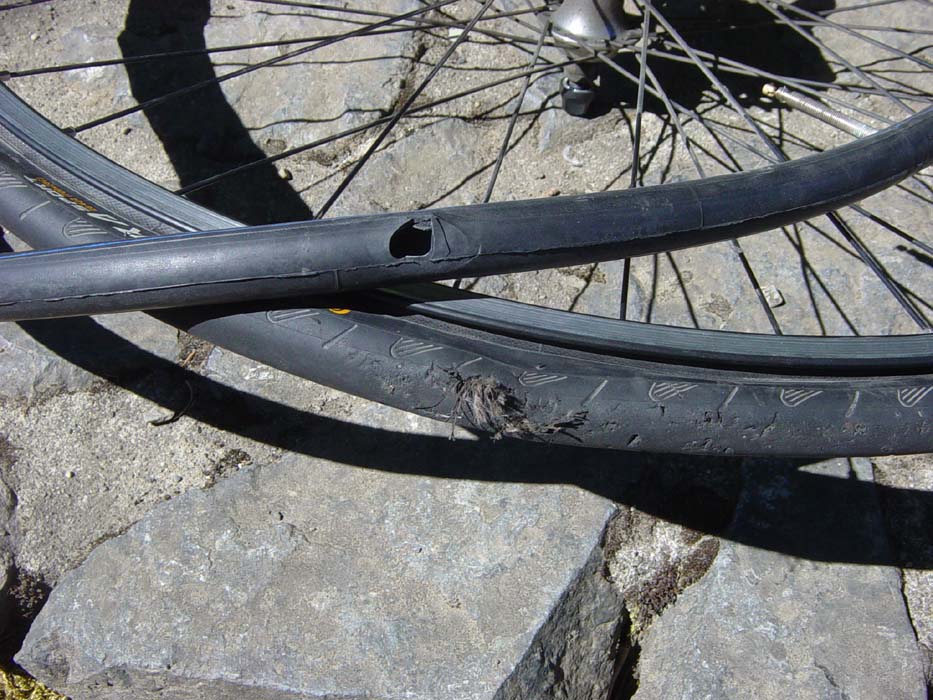 That's right, my inner tube basically exploded right through the tire, rendering both useless. You might recall I replaced my tire with a spare back a few days ago in Snoqualmie, then visited a bike shop in North Bend where they tuned up the bike and pumped up the tires. They may have put in a bit too many PSI for the tube, or at least right on the edge of its tolerances, in order to allow for the extra weight I knew I was carrying. Then, there was very likely a flaw in the new tire itself which caused this blowout. Or something like that, anyway. I'll probably never know.

Anyway, so there I was 20 miles west of Port Angeles with no bike shops anywhere nearby, and no one I knew in the area to come get me. And AAA doesn't help cyclists. So what is there to do? The only thing I could think of, short of walking 20 miles back to town, was flag down some passing motorist in a pickup truck or something and hitch a ride. This isn't the first time I've had to do this and probably won't be the last. I was rather proud of the fact that I never had to do it back on the cross-country trip, but if something like this had happened then, I would've done it. There's not much else you can do, really.

Anyway, fortunately for me a kind passerby saw me sitting by the side of the road next to my upside-down bike and outstretched thumb and gave me a lift back to the bike shop, where I purchased another tire and a couple of tubes (and would've gotten another spare tire except this was their last one in my rim size). Then I reassembled the bike, pumped up the tire and went outside to wait for my ride back to Crescent Lake. Turns out Tommy, the pickup truck driver, was on his way into town from the Quileute reservation to pick up some supplies, and was perfectly willing to take me back to where he found me. I was so grateful I put some gas in his tank to repay him, insisting over his objections. I figured it was the least I could do, even though he claimed I wasn't taking him out of his way at all. Plus it was nice to chat with a local and get the lowdown on what to look for in the area.

Anyway, after dropping me off, he posed for a quick photo. Thanks again, Tommy!

So at this point I started riding again, having lost 3 hours to the catastrophic tire detonation, and enjoyed some more scenic views of the lake, such as this one right here. 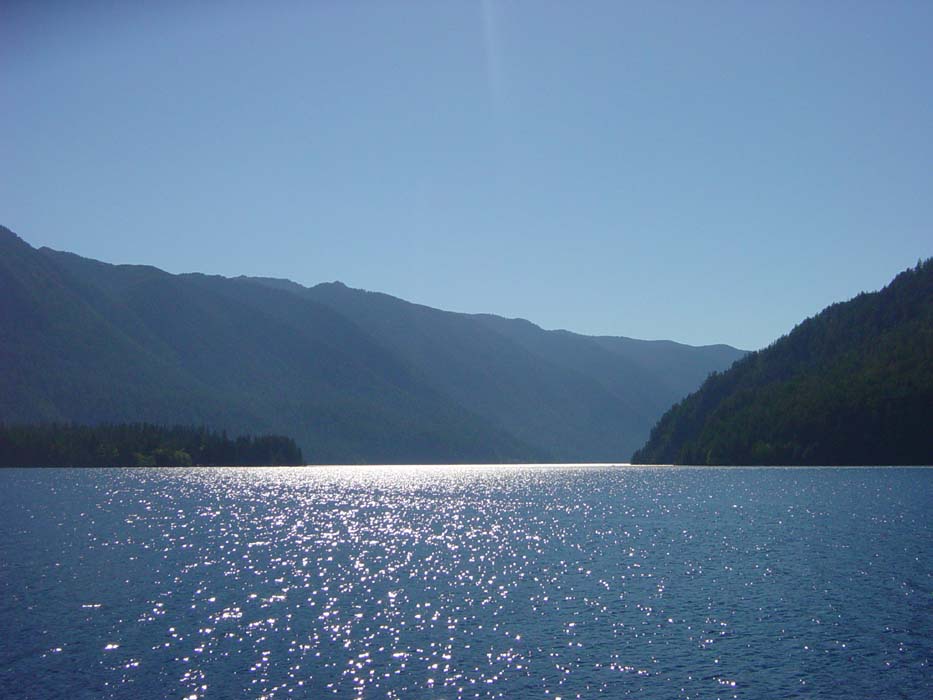 See, isn't this just worth almost any amount of trouble? I sure think so. Here's another one, this time looking inland: 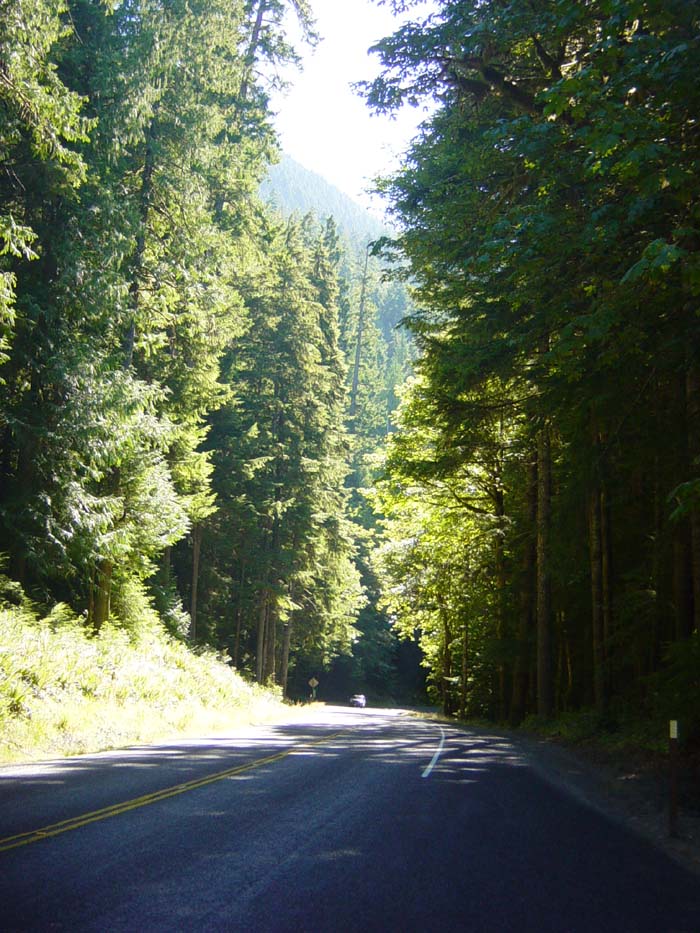 And another as I get close to the end of the lake (which was about 10 miles long, by the way): 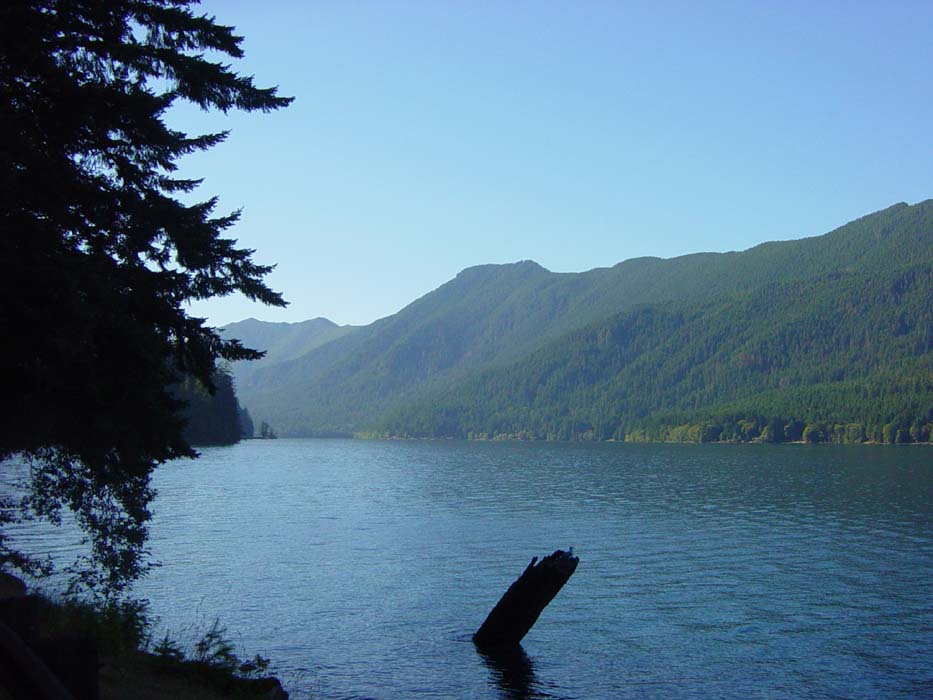 Yet another one, looking out at the other side of the lake. 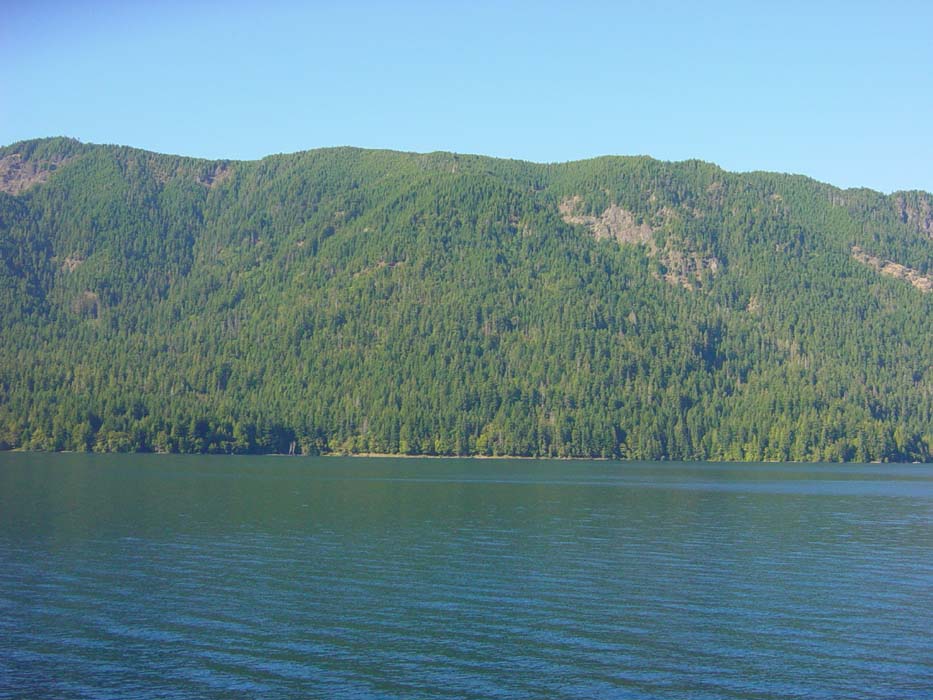 This shot is just to the right of the above photo:

One more time from the same spot, looking to the right back along the road. The three pictures above make a panoramic view laid side by side. Again note how narrow and winding the road is. Scenery notwithstanding, I was glad to get out of there. 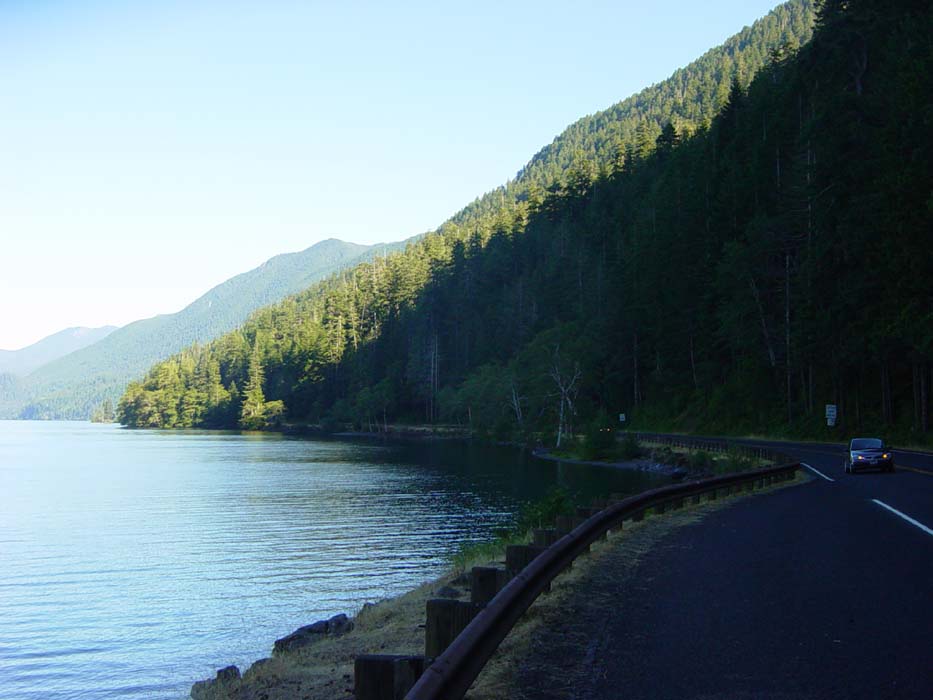 The road eventually took me past the lake and then started a very long (3 mile) climb that made me happy I'd taken a three hour break, quite honestly. For one thing, I'd been able to refresh my water bottles, which was sorely needed. Once at the top, I pulled over and gasped for breath for a few minutes, then took this picture to show where I'm heading next. 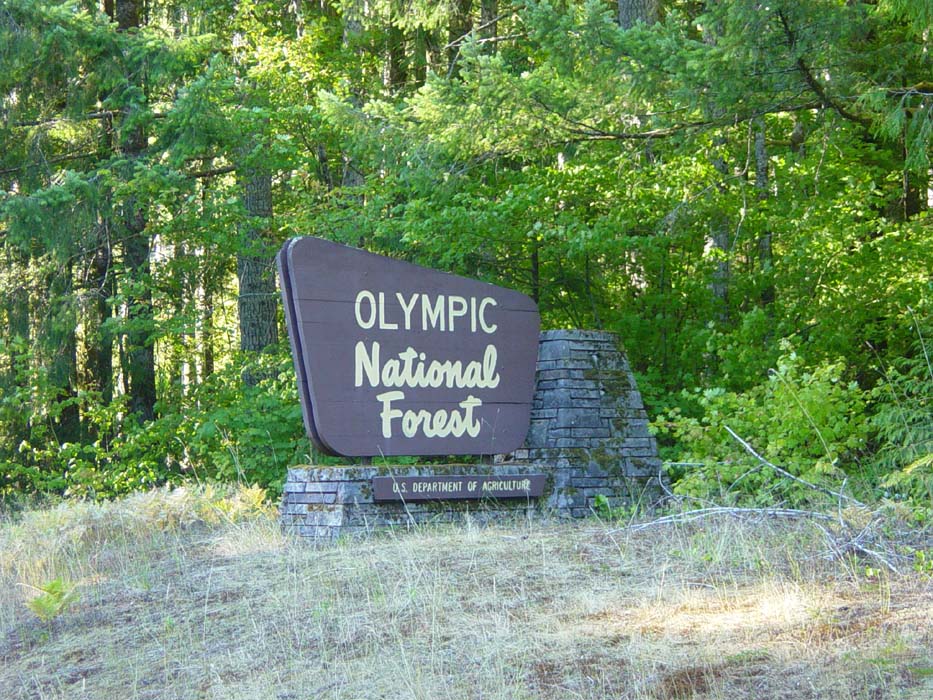 Finally we conclude the pictures with this last shot of the forest ahead, which eventually opened up into flat area with few hills, fortunately. 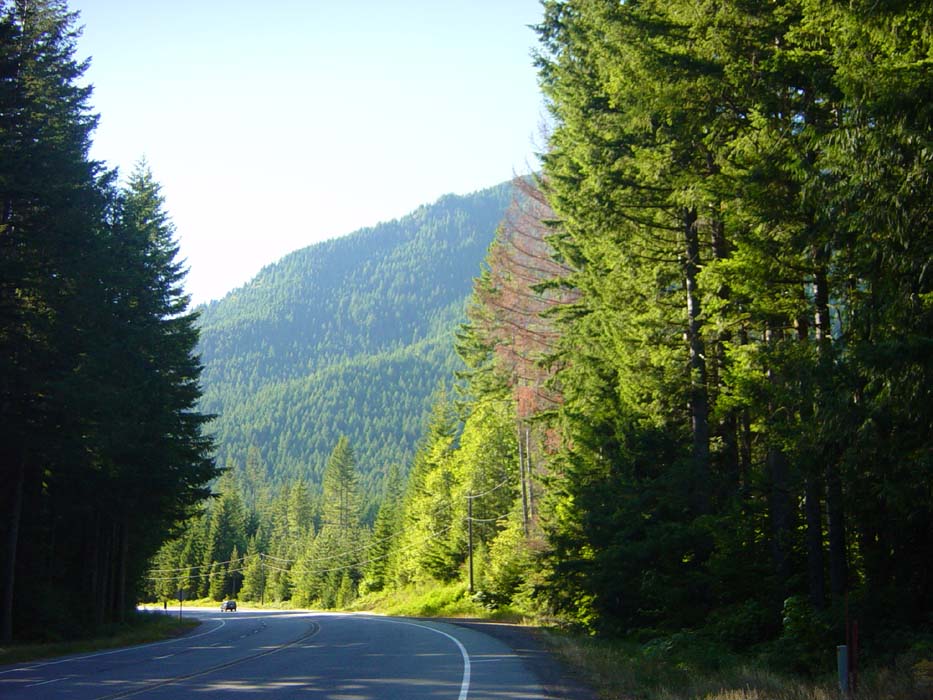 Once I got around this curve, the road was straight and flat for miles, and I was at last able to just cruise for a ways. Unfortunately I'd lost too much time from the tire explosion, so I had to stop at a little free campground at Bear Creek, where I'm staying the night. The original intent had been to get through Forks today, but at least now I'll have time to stop there for a bit and hang out with all the vampires.