By the time I woke up today, I was stiff and sore from the bad night's sleep in the tent, and my stomach still hurt from yesterday. Getting moving was very slow. Part of the problem was that with all that fog last night, there was a foghorn going off every 15 seconds or so with a loud WURRRRR noise that made it even more difficult than usual to sleep. Think of an alarm clock that buzzes regularly that you can't shut off, and you have the basic idea. So I essentially left this morning without having had a decent night's rest, but at least I could expect very little in the way of hills, seeing as that's what I'd been told by several different people so far.

Well, they were wrong. Sure, there weren't any 2 or 3 mile massive cliff scalings like yesterday, but there were still plenty of hills and they seemed unusually steep, forcing me to pedal hard even in the big ring. Maybe it was just my lack of rest or the pain in my abdomen that made it seem harder, I don't know, but every slope was a torturous grind. At least I could enjoy the descents for a change, at least some of the time. Still, I would've preferred something flat so I could maybe cruise for once, but that didn't happen until about 30 miles in. There was this little harbor town and about a one mile stretch of road alongside it, and I was so happy for the flat section I actually took a picture. The road's right at water level. 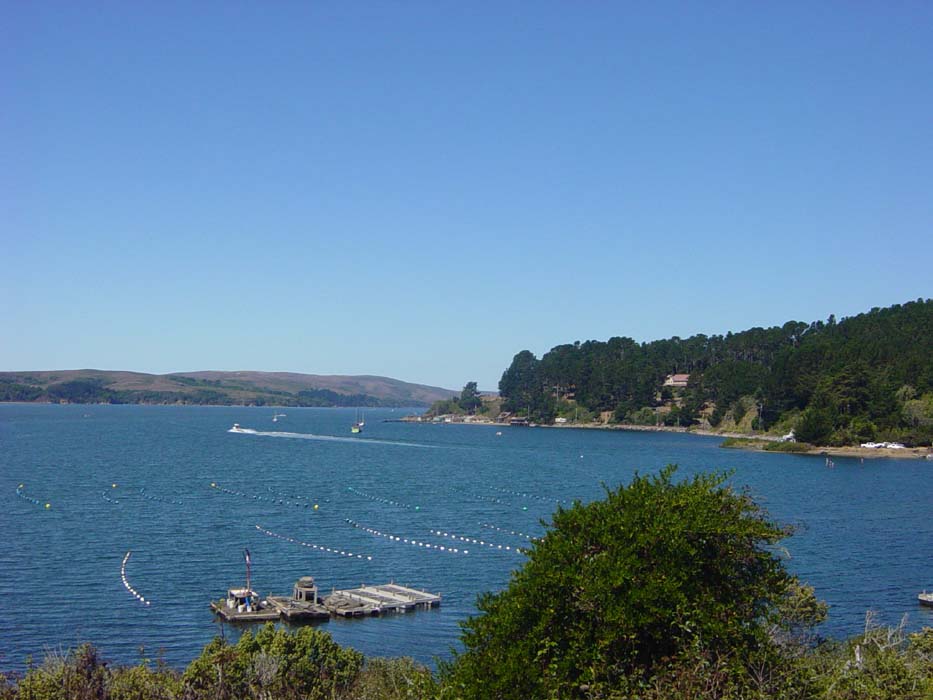 All day long I was encountering tons of bicyclists, who it turned out were on an organized group ride out of Petaluma. Their rest stop was Tomales Bay and they were everywhere, usually making me look bad by blowing past me like I was standing still. One guy passed me 3 times (he would stop with some friends here and there) and kept shouting encouragement at me as I struggled up whatever hill I was on. I told him I'd get there...eventually.

After about 45 miles of this I came to my second flat section of the day, about 3 miles long and at sea level, but right into the wind. I just moved slowly along, glad to not be climbing, and took this shot looking out over the water. Notice the fog coming in, and also, the line of hills on the left. You'll see why these are important in a moment. 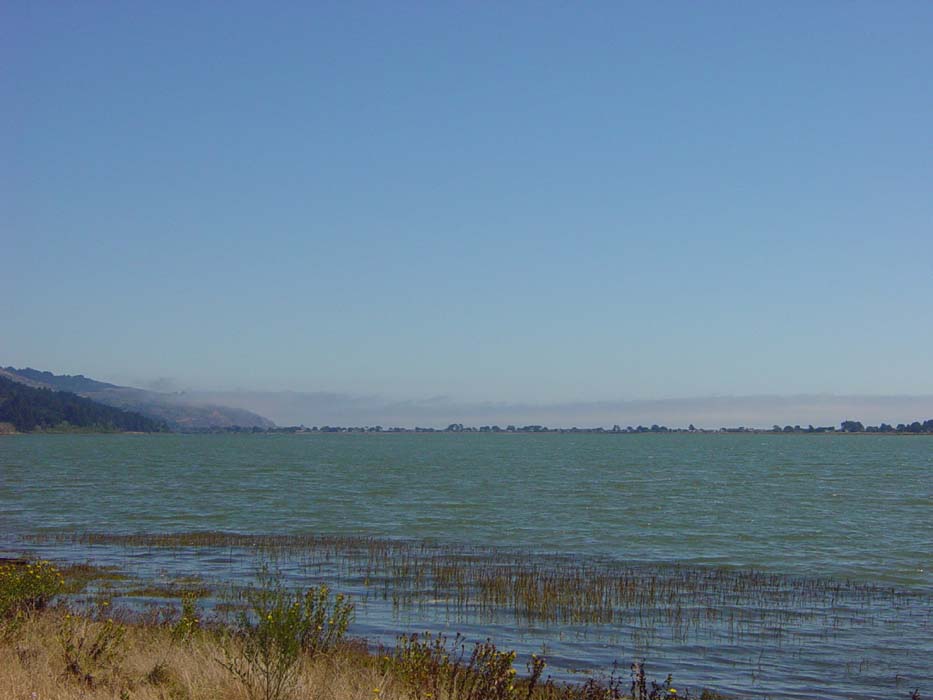 At the bottom of that ridge is the town of Stinson Beach, where I took a break, checked the time (4:15 pm) and talked to the cousin of mine I was planning to stay with in Frisco. I was only about 15 miles away from the Golden Gate Bridge at this point, but I knew there was a serious climb ahead, even if I couldn't see it very well because of the fog. So I figured it would take about 2 hours to get there. Then it was time to start climbing into the dense fog. Here's a photo from one of the few spots I was able to pull the bike over, seeing as the road was extremely twisty and narrow and traffic was very heavy. What are these people all doing on a Saturday afternoon anyway, going to the beach or something? 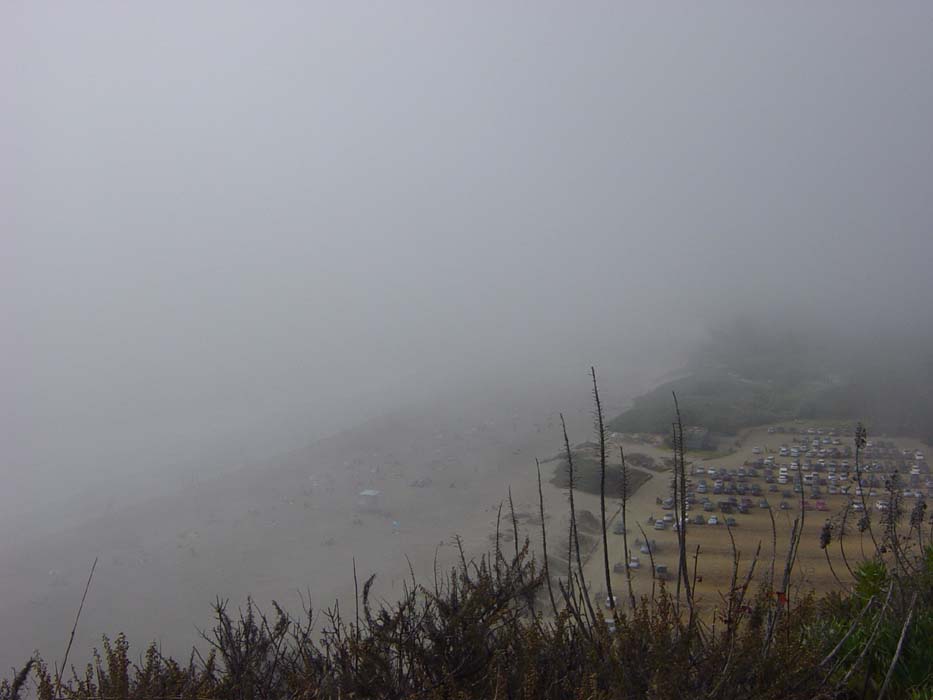 That (what you can see of it) was Stinson Beach, which I'm sure would've been a great place to enjoy the afternoon if it weren't for the weather. Just remember how sunny and nice it was only a few miles north. Fog, in the Bay Area? Who would've thought. Anyway, here's what the road up looked like: 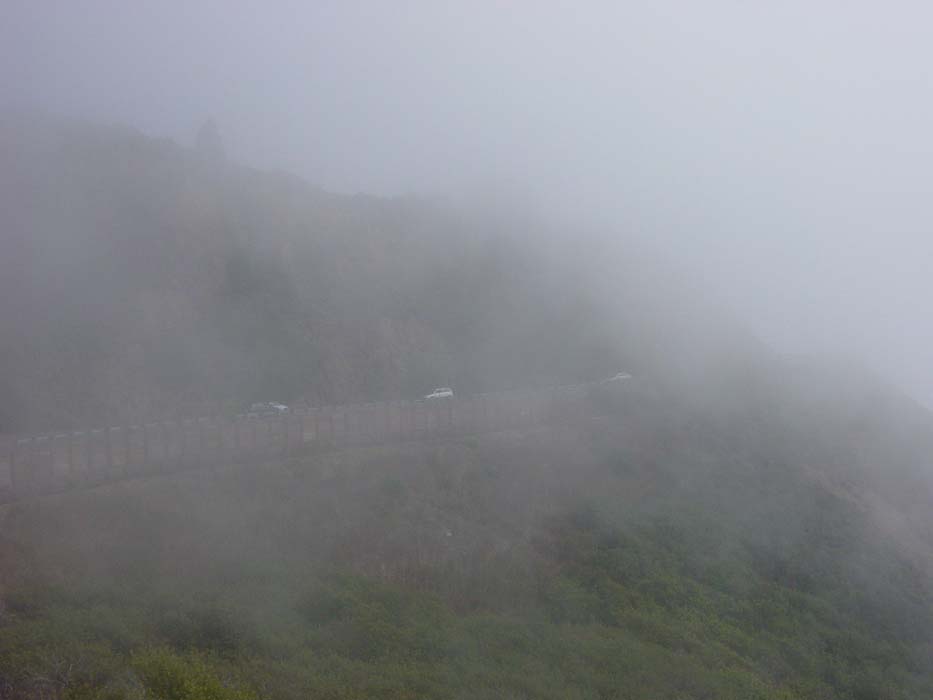 At one point I was stopped alongside this sheer dropoff going almost straight down to the beach. This secluded spot could be accessed only from a narrow, winding foot path a bit farther up the road. 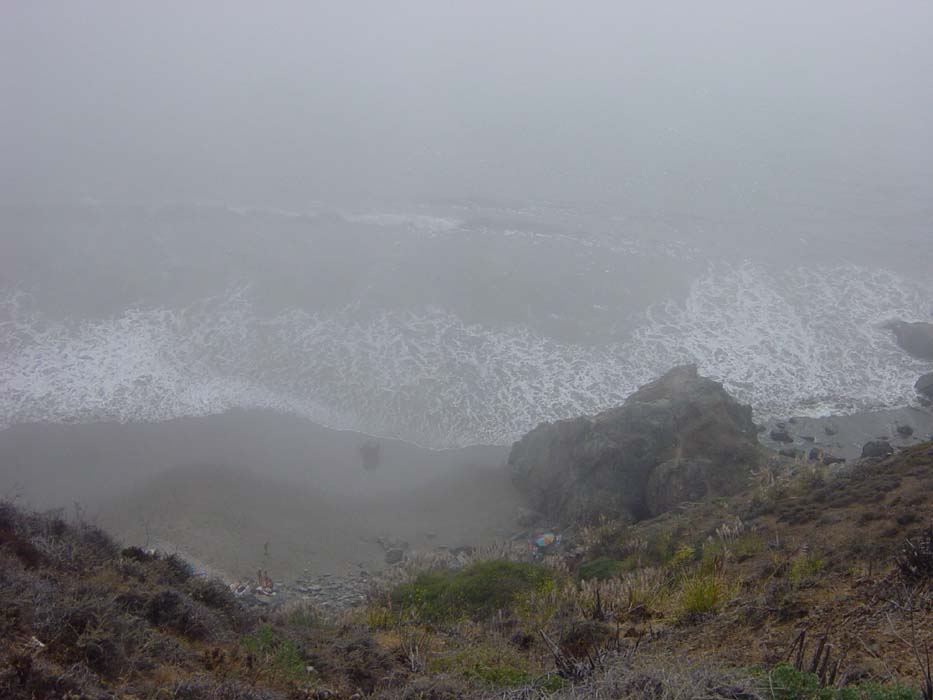 Every now and then the fog would clear up just a little bit. Way down there you can see some of the road I'm on (to the right of the picture). 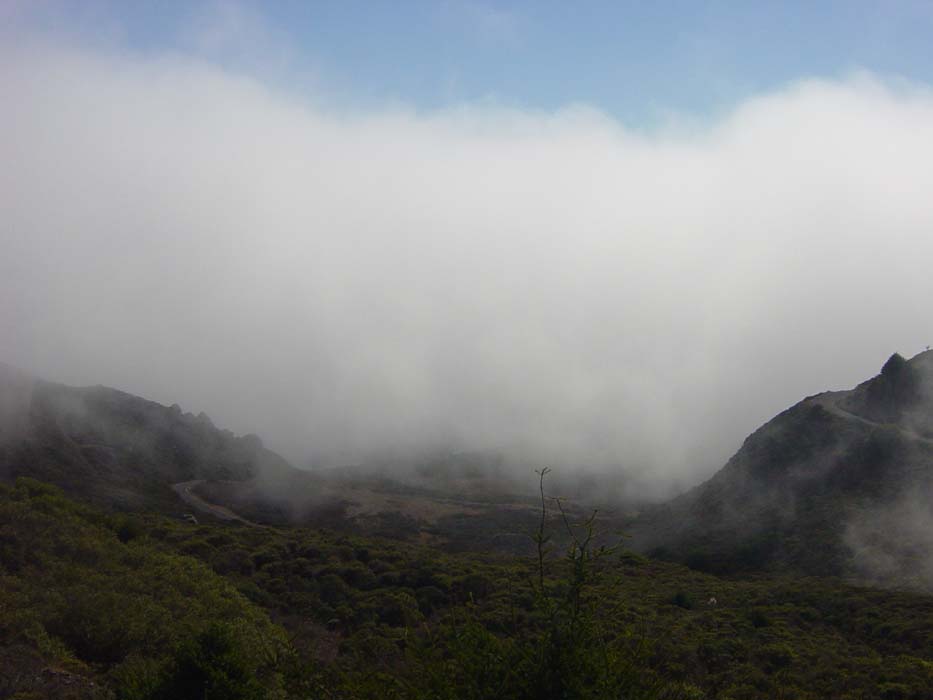 Eventually, after what seemed like forever, I started getting near the top. You can tell, sort of, because there's the top of the ridgeline way up on the left side. Still a lot of climbing to go, though. 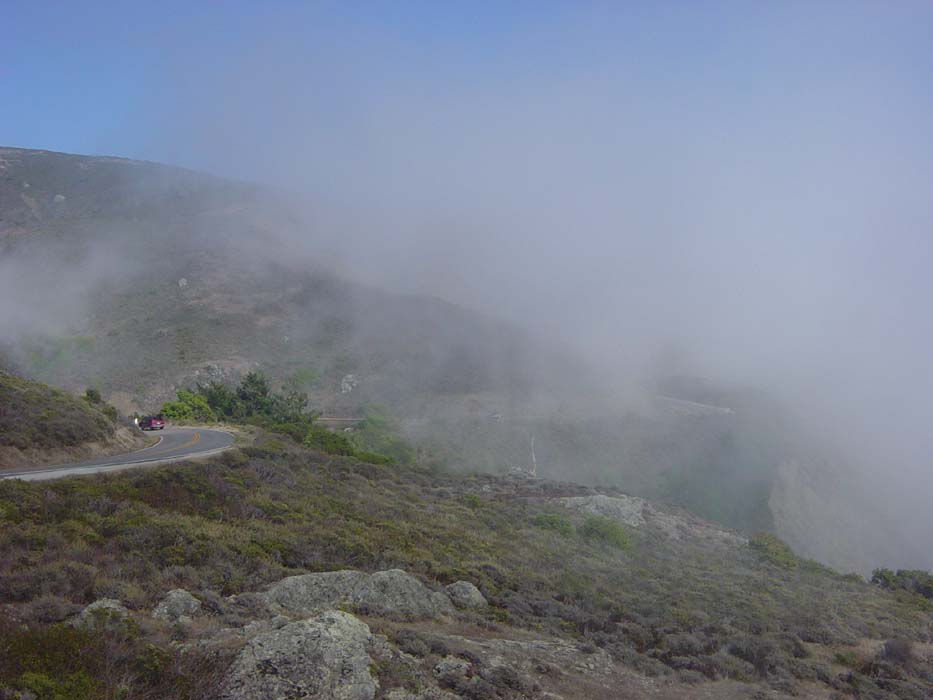 Another picture from a steep dropoff a bit farther. Compare this to the beach picture and you can see how much altitude I've gained by this point. 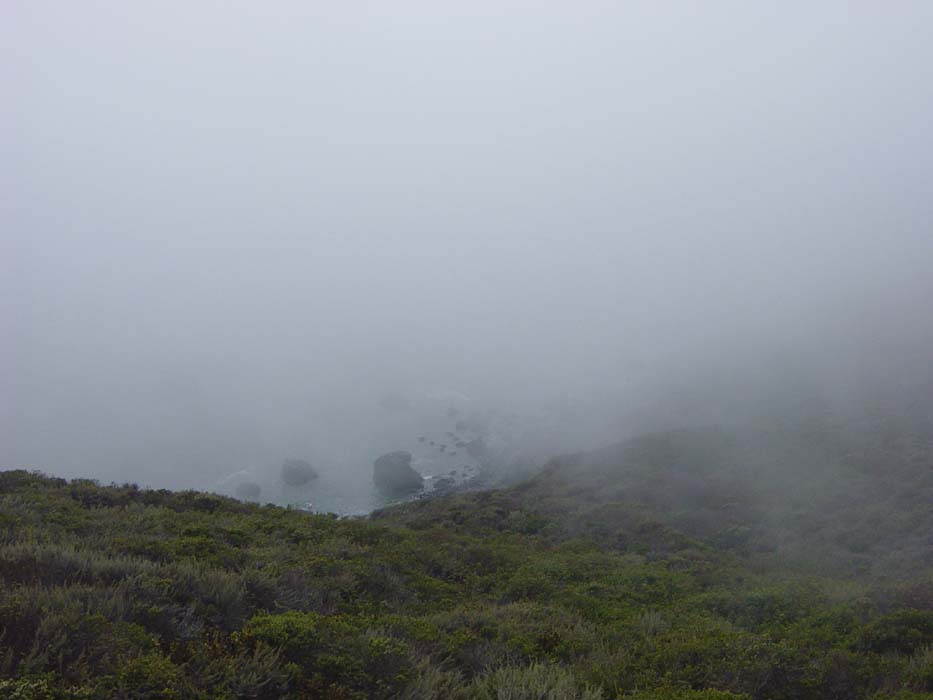 Another view through the fog. 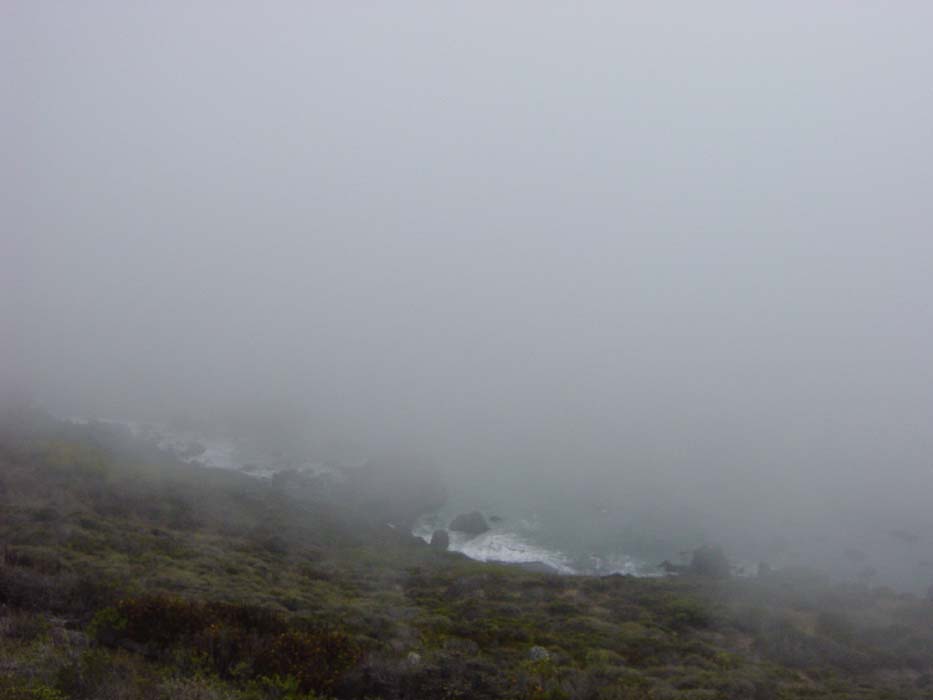 The climb continued on and on until finally, after over an hour, I was at the top. This was 8 miles of some of the most horrendous climbing done yet on this trip. Countless stops for rest, 2 water bottles drained, cold wind blowing over me, endless traffic and no room for error, and several places so steep I couldn't keep the bike stable and had to push. Here's my reward, my first look over the hill at San Fran. 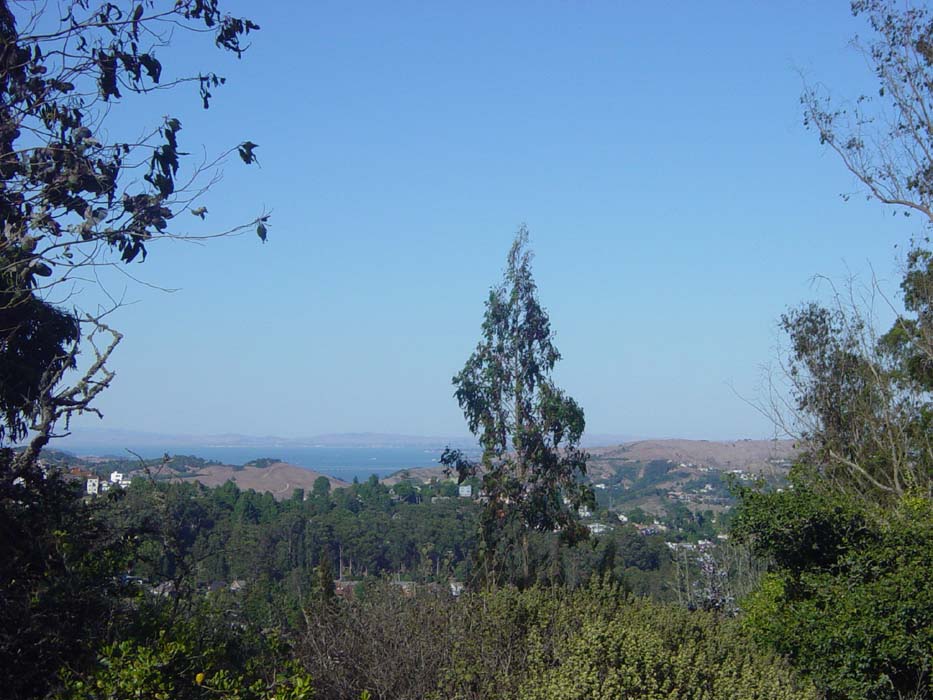 Now to get to the Golden Gate Bridge. First, the road descended at a breakneck pace down a couple miles, then wound around and took me to the intersection of Route 1 and Route 101 (remember that?). Unfortunately, while 101 would've taken me right to the bridge, it was now a restricted access freeway that didn't allow bikes (this is why I had to take that terrible climb up here instead of just looping around on 101 in the first place). Eventually I found a bike route that went around and through Sausalito: 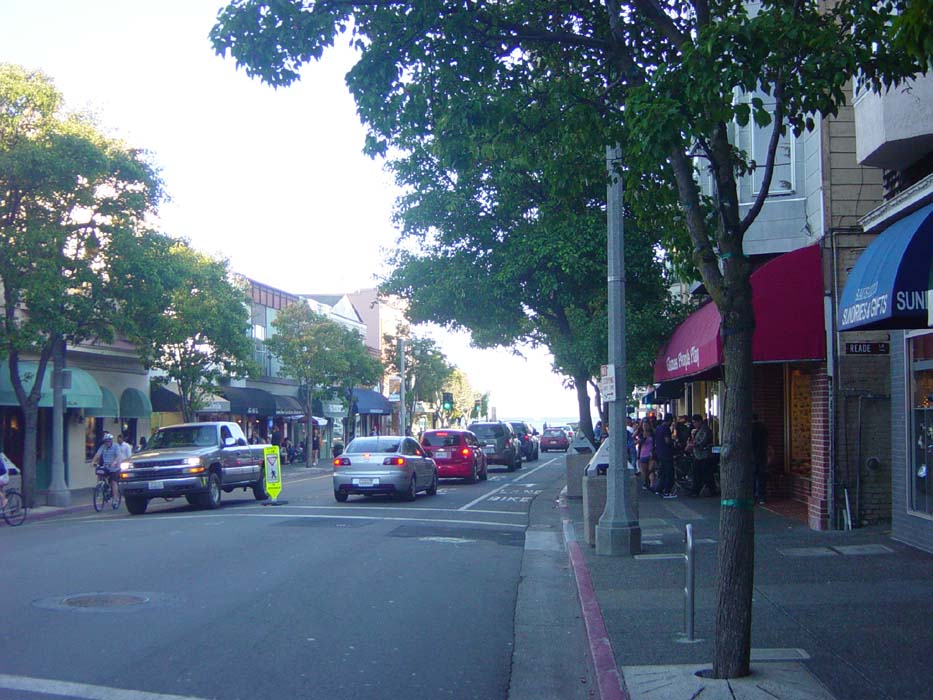 Notice the bike lane. I love bike lanes. There are bikes everywhere in this town and people are used to them, so that made things a lot easier. Also notice how there's no fog on this side of the hills. Well, that wouldn't last. The further around I went (and the higher up I climbed) the more the fog returned. Here's a look out at the Bay as I started getting close to the bridge. 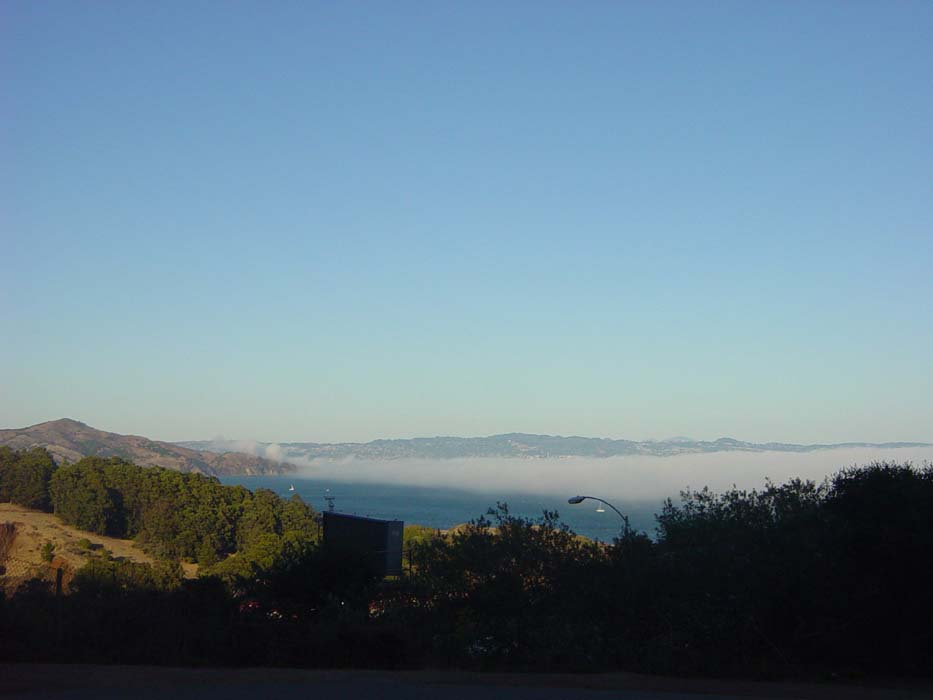 And here it is. Well, sort of. I'm quite certain there's a bridge in there somewhere. 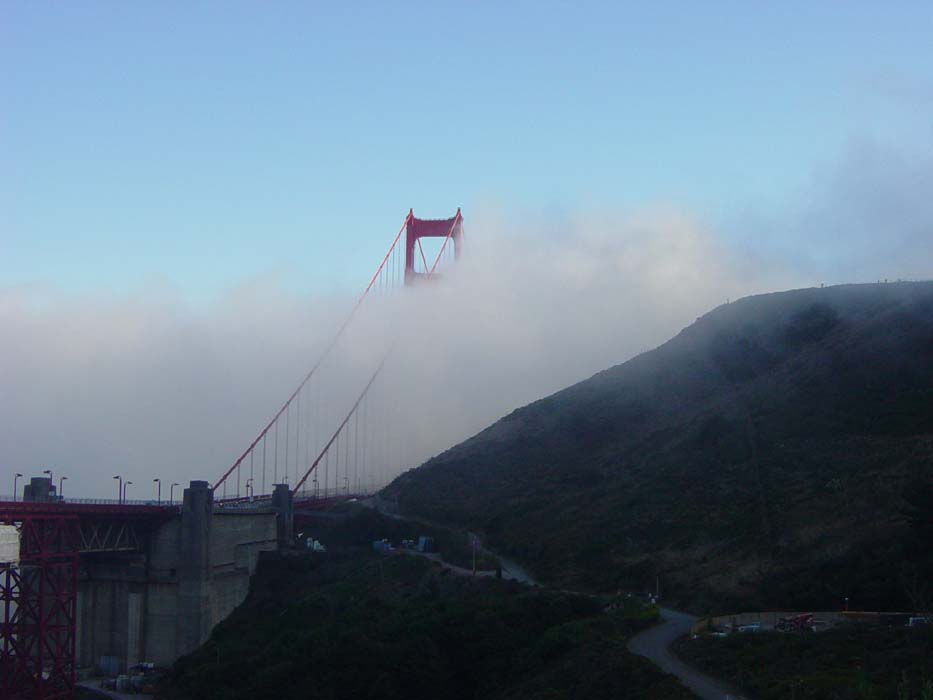 The Golden Gate Bridge has wide sections on either side for pedestrians (on one side) and bikes (on the other). Today bikes were on the right side, so I headed on over. Unlike a lot of bridges I've crossed, this one had a wide path, was very clean and stable, and a nice guardrail. I was grateful for all of these things because the wind coming in from my right was very strong, threatening to knock me over if I wasn't careful, and there were tons of bikes passing me in either direction. You can't see them through the fog, but they're there. I kept seeing people going by in shorts and T-shirts and there I was wrapped up and freezing in my jacket, wondering how those people couldn't think it was cold. 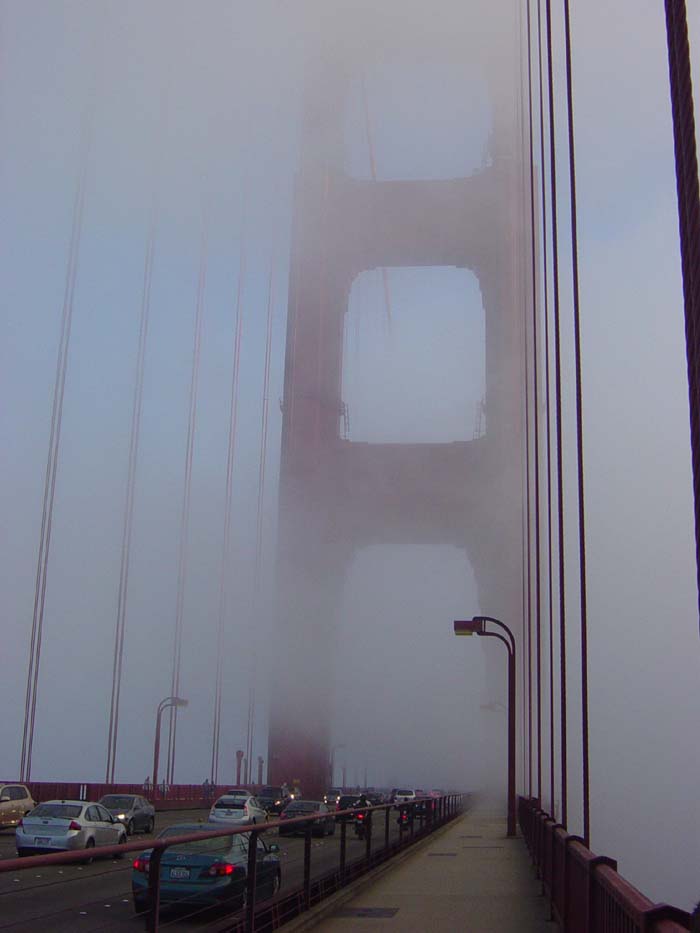 Eventually I made my way into downtown, headed along Lombard Street and the Embarcadero at various points, and came to the BART (Bay Area Rapid Transit) train station where I finished the day's ride. It was now 7:30, so it took me over 3 hours to make it those last 15 miles. It wasn't all climbing, there was a lot of asking for directions and missed turns and searching for trains, but still, it seemed like it took forever. The ride to Walnut Creek was another half an hour so I wasn't really finished until well after dark. I'll be staying with family here for another day (my first off day since Astoria) to rest and recover and then it's off again down the coast.