San Jose to Monterey, California
Miles: 83
Terrain: Mostly flat, a few minor climbs but nothing serious
Weather: First half: sunny and warm with light tailwinds; second half: sunny and cool with moderate to strong crosswinds/headwinds

Today was really two different rides that happened to be on the same day. I'll talk about each individually, but first, before I even got started, I had problems with the website. Seems my local provider had done something that wouldn't let me make any changes, so I couldn't upload yesterday's page and all the pictures. I kept trying to call, but no one would answer and their recorded message was from months ago. Eventually I sent an email and left just before checkout time, at 11am. Later on I would wish I had left an hour earlier, when I was actually ready to go, except for the website thing.

The day was already quite nice and this was a continuation of yesterday's smooth and easy riding. I was already on the edge of San Jose so within minutes I was completely out of town and found myself on a wide, almost deserted stretch of road that went on seemingly forever. Here's an example of what I got to look at for about 15 miles: 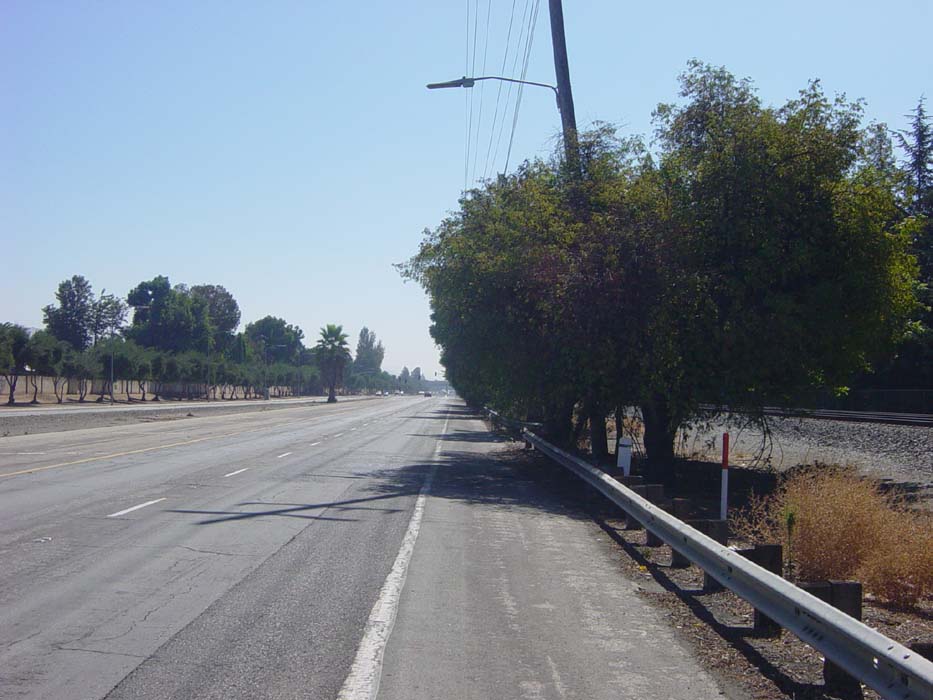 The shoulders weren't all that nice, and every one of those trees you see on the side left a big pile of hard-shelled fruit of some kind all around the base, so I wound up in the road most of the time. This wasn't a problem as very few people were on this street. Route 101 was about a quarter mile to the left, so I guess everyone was on that. There was a rail to my right as well, so the lights I came to had no streets going that way (usually) meaning I could basically blow through them at will. That took care of one of yesterday's annoyances. (Oh, one more thing about that: part of the problem is every light has left turn arrows for every direction forcing people turning left to have to stop and wait, and make oncoming traffic stop as well. If they'd change those lights to green circles allowing left turns when clear, there's be a whole lot less waiting. Come on, California, get with the program here.)

While the road was smooth, there was some terrain off to the sides of me. To the right, across the tracks, it looked like this: 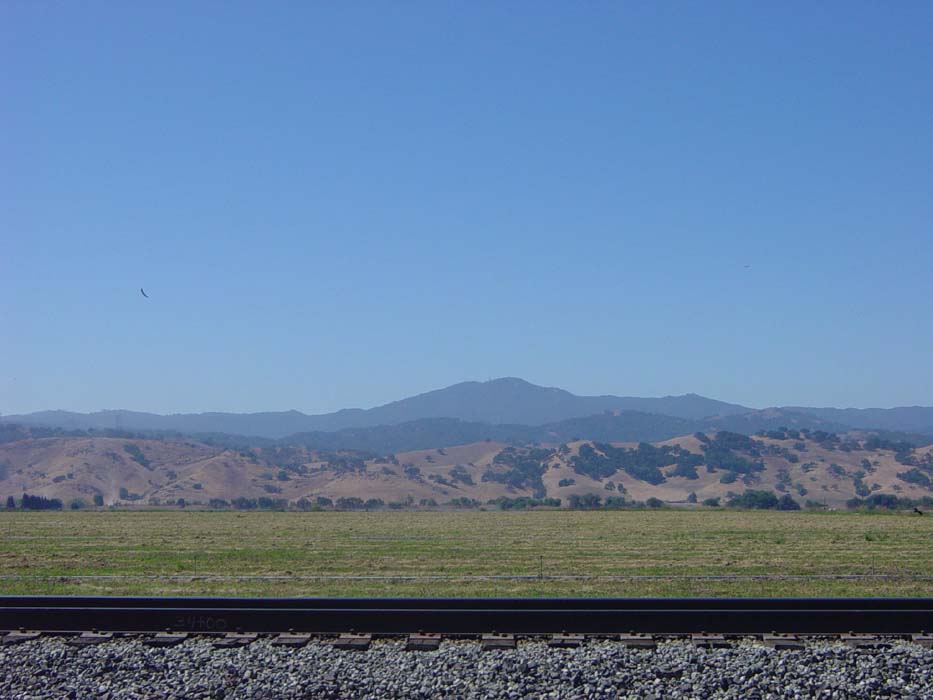 More of the same to the left, on the other side of that young orchard there (I saw a lot of those, more on this later). Fortunately, at least for now, the road ahead remained pretty flat.

Eventually, I got to Morgan Hill, which was the town where I'd expected to stay yesterday. Turns out the hotel I was looking at heading for was 19 miles from where I stopped in San Jose. There's no way I would've made it that far in the 45 minutes of light I still had left, so I'm pretty glad I stopped where I did.

After grabbing some food in a Jack in the Box (they have this double chicken sandwich meal deal that's pretty good, and we don't have that restaurant back home) I moved on to the next town, Gilroy, which is where I expected to jump on the 101. Here's a pic of what the downtown area looked like. Pretty cool looking place, actually. See those trees there at the end of the street? That's where the town came to an abrupt end and the only thing after that was more road. 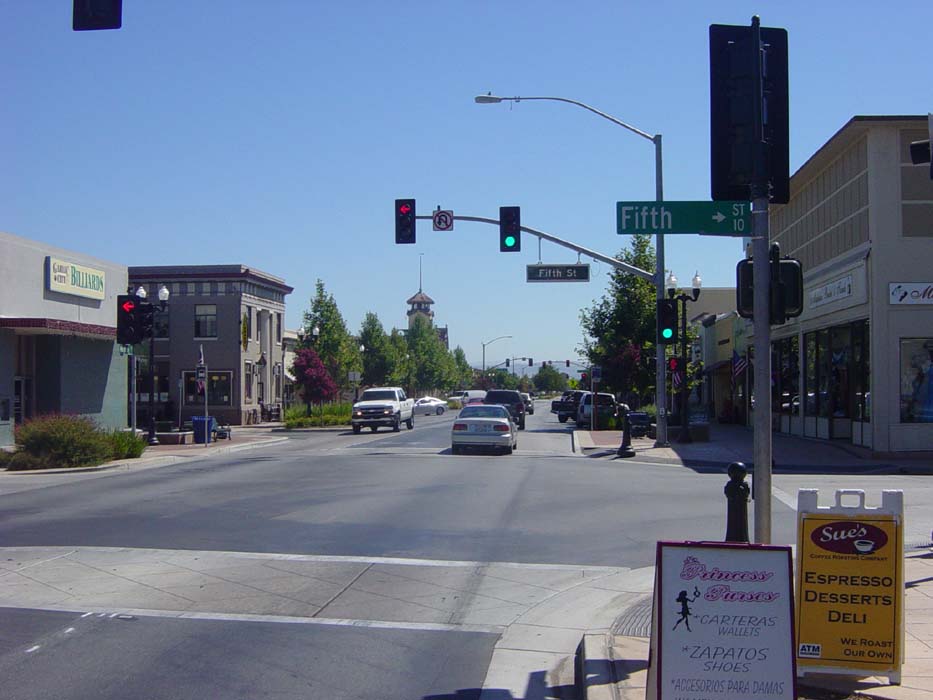 A couple of miles later, Route 28 dead-ended into the 101, which fortunately at this point was no longer a restricted access freeway, just a divided road that looked pretty much like a highway except for the occasional side entrances/exits. This is what I'm talking about right here. Also notice that I'm now heading into those low hills I pictured earlier, but no serious climbing so far. This was about the 35 mile point, and signals the end of the first ride of the day, which was blissfully easy and painless. 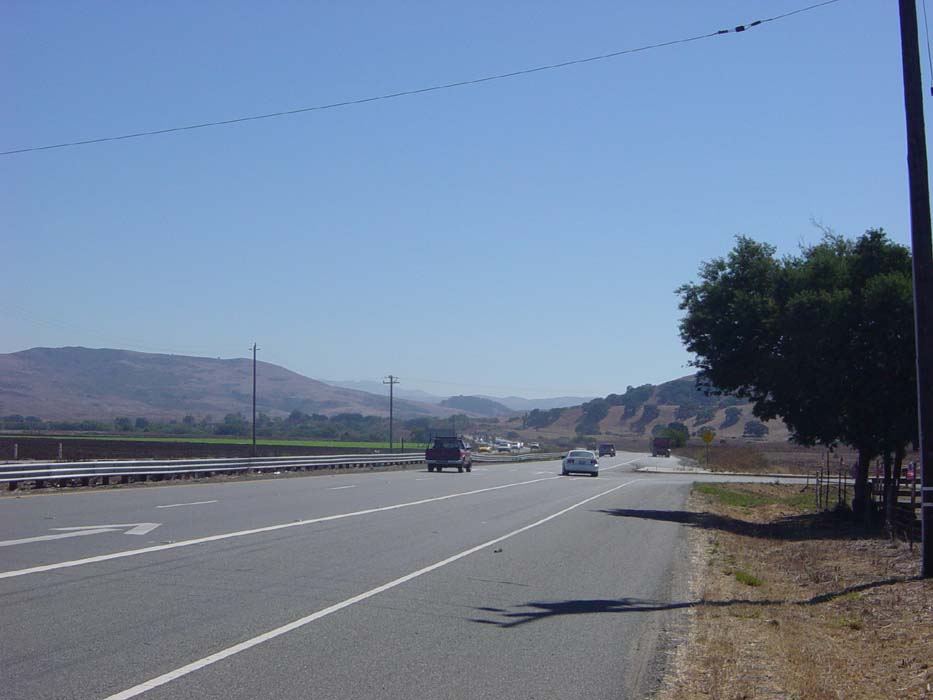 The difference in the ride came when I got on the highway and started heading west instead of south. This meant that the WNW wind (which started out light but got stronger as the day wore on) was no longer helping me but was instead hitting me in the face. As anyone who rides a bike regularly can tell you, a strong headwind is no fun at all. The usual description is it's like a hill you can never finish climbing, which definitely describes it. In other words, changing direction 90 degrees can turn your ride from an enjoyable cruise into cruel torture. Well, that's probably a bit overdramatic, but you get the idea.

So anyway, I rode along 101 a bit until a sign appeared telling me that bicycles had to exit. Sure enough, it turned into a restricted access freeway again without any other warning. Here's the sad proof. 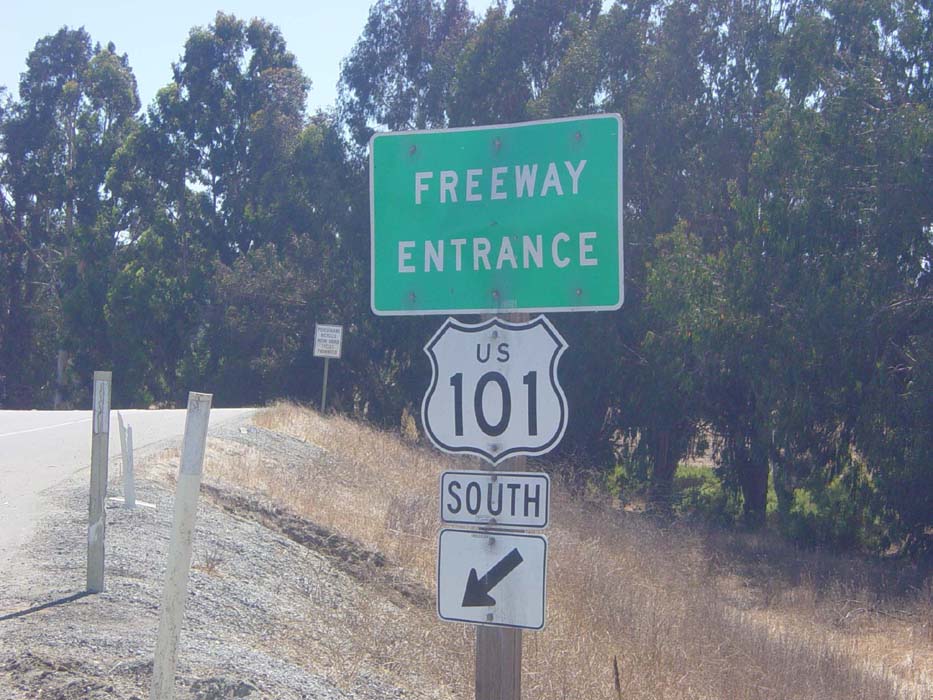 No, not that sign in front, the one in the back there, that looks like this close up: 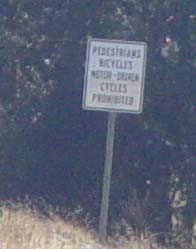 I really am getting to hate that sign. Anyway, so here I was in the middle of nowhere, at the exit for Route 129 which went I knew not where, looking at this road leading into the hills. 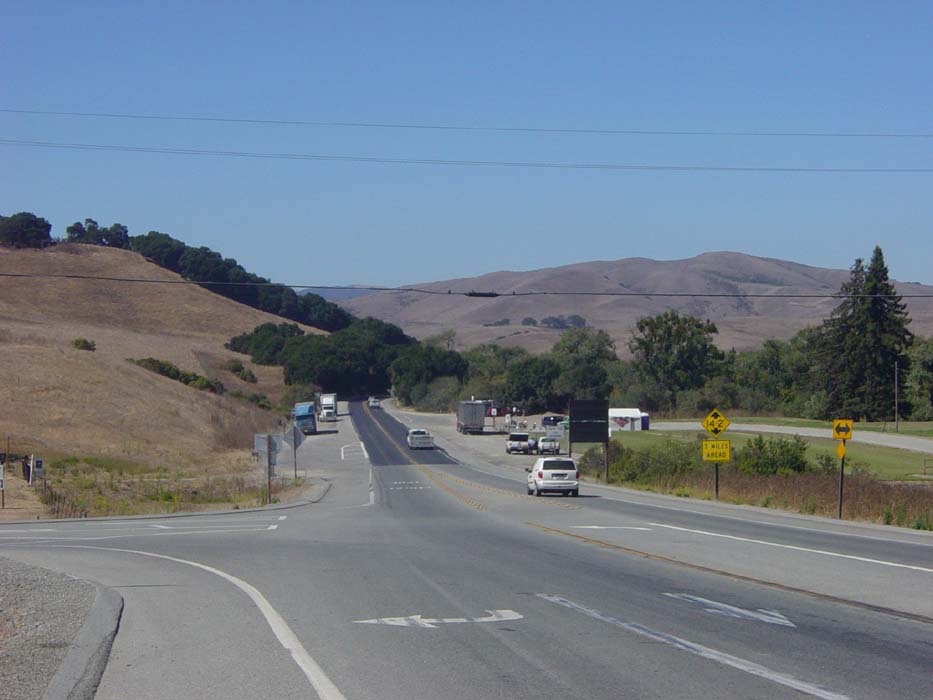 The exit sign said that 129 went to Watsonville, and I had a map that showed the town but not the road, so at least I knew where it was. There was no way to proceed down the highway, so this was really my only choice anyhow. I set off, and the road cut through the hills pretty tightly, sometimes as close as this right here:

Note the lack of shoulder and all that fallen rock debris. In fact, as I was standing here, a truck roared by and set off a mini avalanche of little shards next to my bike. Hmm, perhaps this was not a good spot to linger. I moved on.

Even though the hills looked pretty bad right there, they actually weren't that terrible, with only a few gentle slopes here and there. Whoever put that road in made sure it kept the elevation changes to a minimum. Probably a good idea considering the sheer amount of traffic that came through the area. You'd think it was a highway instead of a narrow 2-lane road.

After a few more miles of that I emerged into the open, which was nice except the wind was now battering me full on. The area here was now one of open farms all around, with lots of different crops. Here's one, some small trees covered by protective...uh...things...I'm pretty sure these were cherry trees, not sure though as I never saw anything on them. 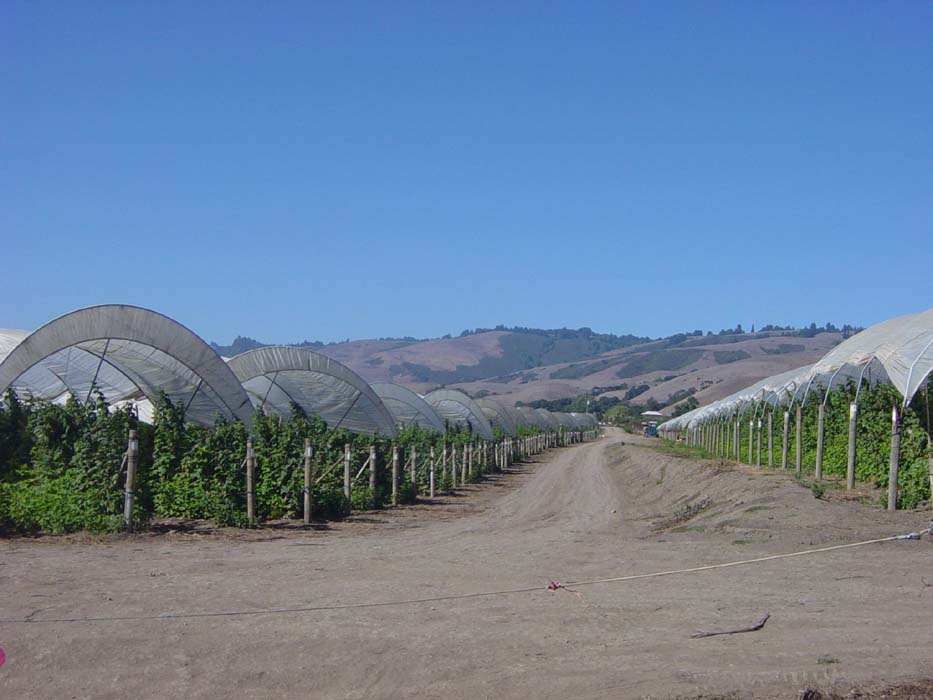 These, as anyone who's ever self-picked them will know on sight, are strawberry plants.

And right nearby, some apples. 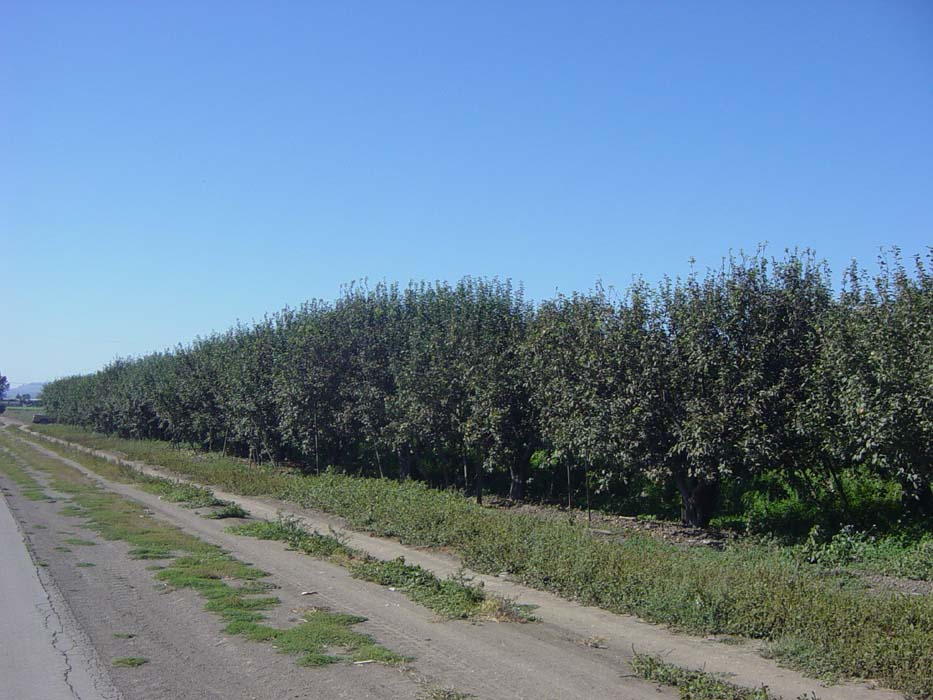 129 ran its way along through Watsonville and finally to Route 1, which I hadn't seen in a while, and expected to rejoin at this point. Only one problem, it was a freeway here, and there was that pesky "No Bicycles" sign again! Well, now what? I had to backtrack into town, take a side road out and down a few miles until Route 1 was no longer a freeway. I took this picture where the street dead-ended into Route 1 and Watsonville was visible in the distance to my right. Just getting around that 2 miles or so of freeway took me almost 10 miles out of my way, all because of a stupid sign. You can take bikes on freeways all over the place in California, why not here? 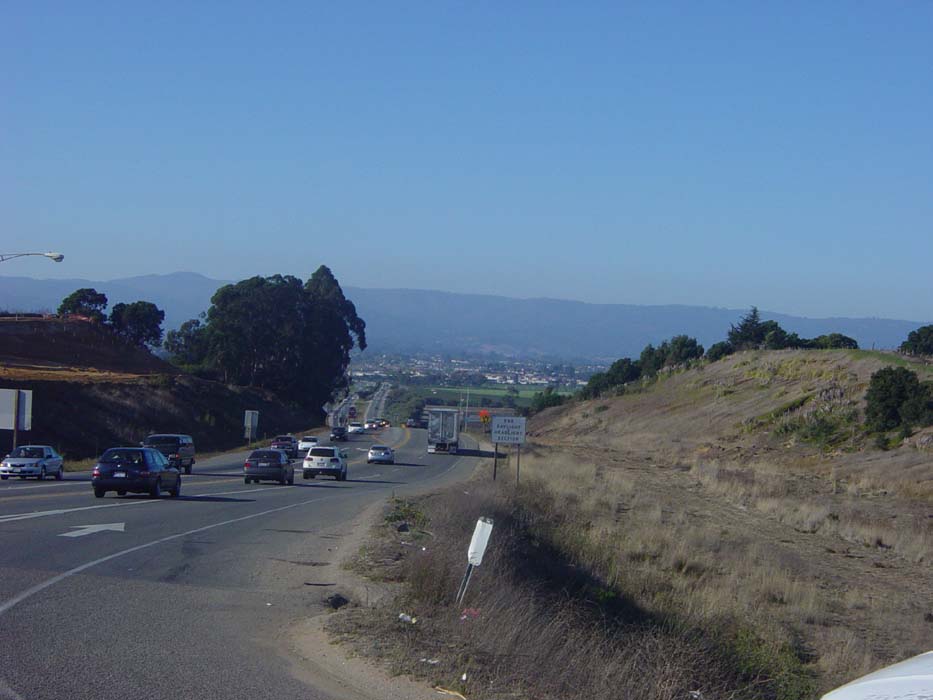 Anyway, this particular intersection was very bad, with tons of cars coming on full speed from either direction. I had to move down the road a bit and wait about 5 minutes (not an exaggeration) for a break big enough to sneak through. There were some hills as well, and I took this picture overlooking a little farming area with the coast just barely visible on the horizon. 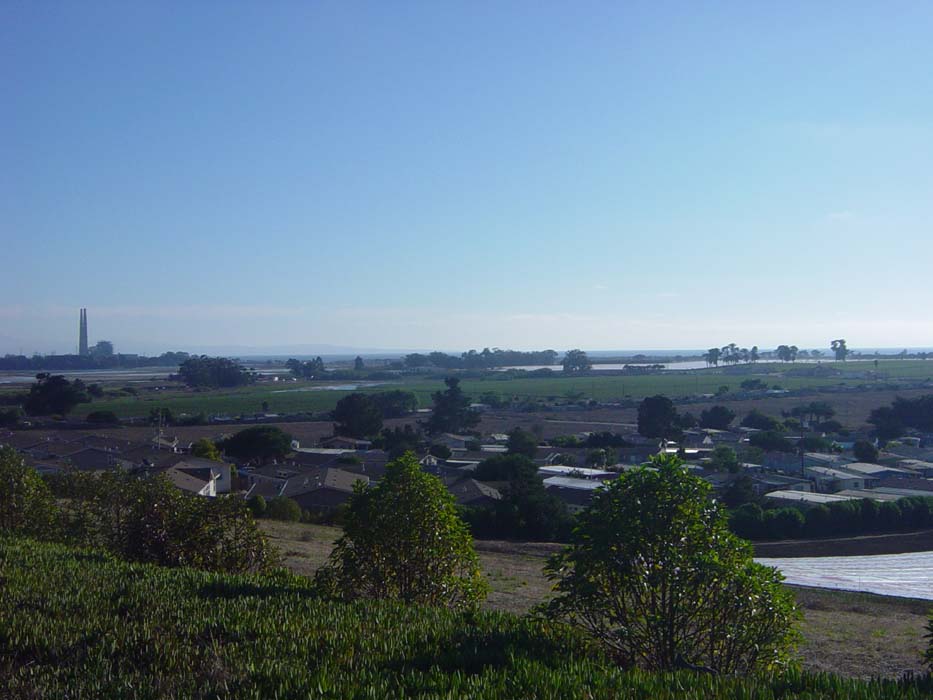 Sadly, Route 1 became restricted access yet again about 6 miles farther on, but this time I was prepared, having gotten directions around that part. The detour took me through even more farms. Here are some artichokes (I'd never seen the full artichoke plant before): 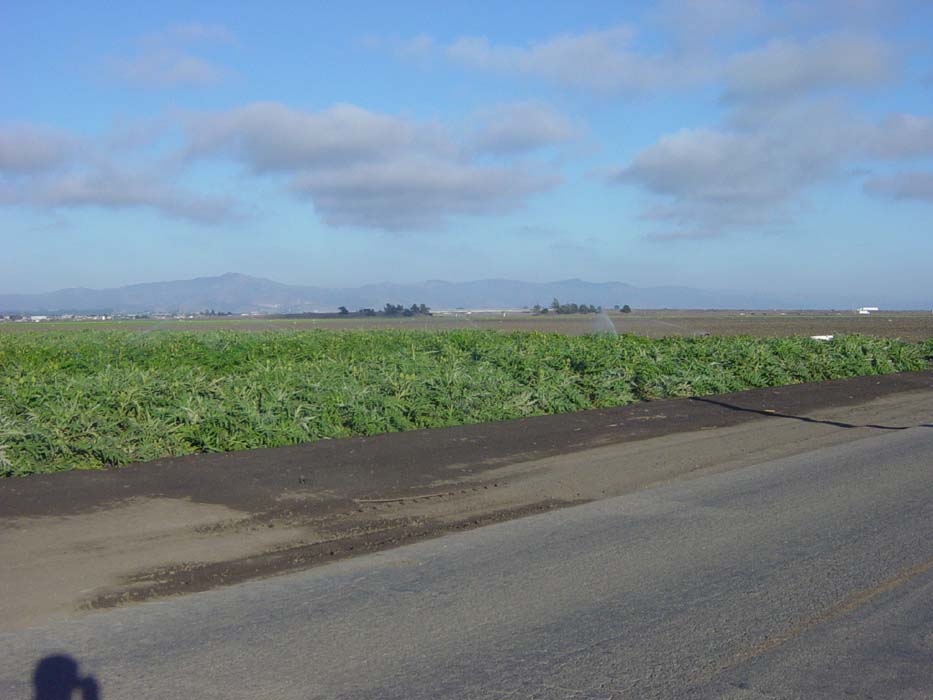 The detour paralleled 1 for a bit before coming to a road called Del Monte, which had a Dole plant alongside it (nice bit of irony there). The best part was the surprise waiting for me, a bike path! This was the start of the Monterey Bay Coastal Trail, as it turns out. 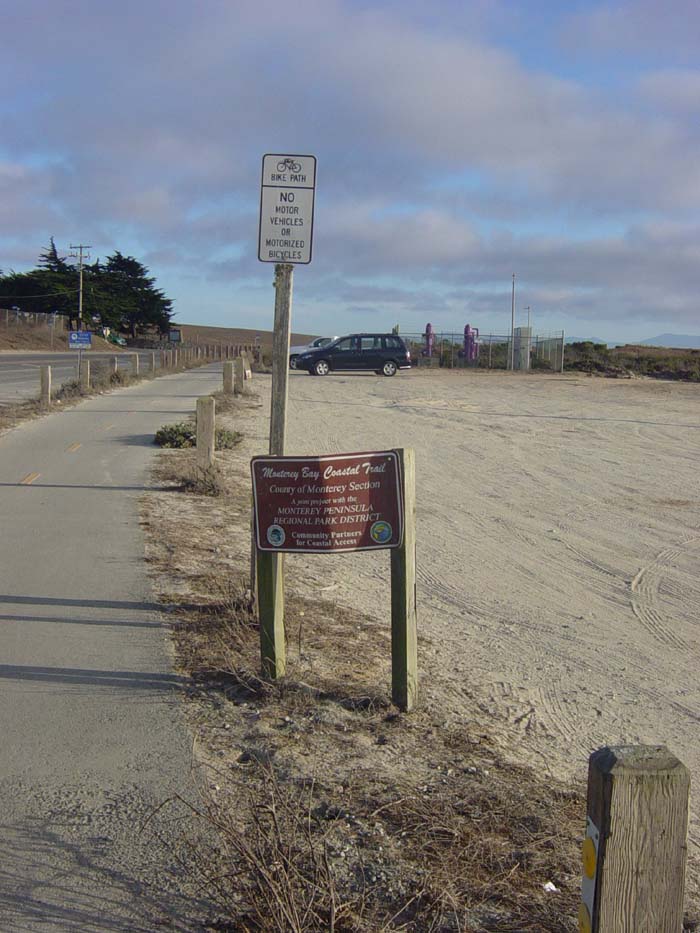 The path wound along next to Del Monte for a while, looking basically like this. Notice the weather has become cloudy; it's actually getting fairly cold as well, and the sun is starting to get really low. 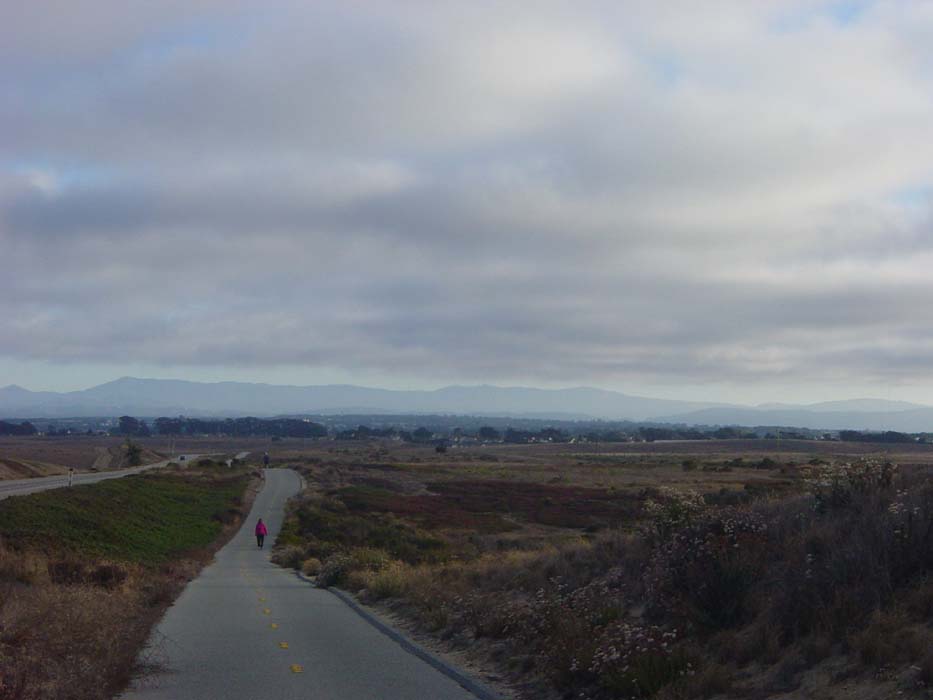 Eventually, Del Monte came up next to Route 1 and the path switched over to following the highway, which it did all the way on into Monterey (but not before passing through a few other towns). I had a hotel in mind so I kept on going, despite the setting sun, until finally I could see my destination in the distance. 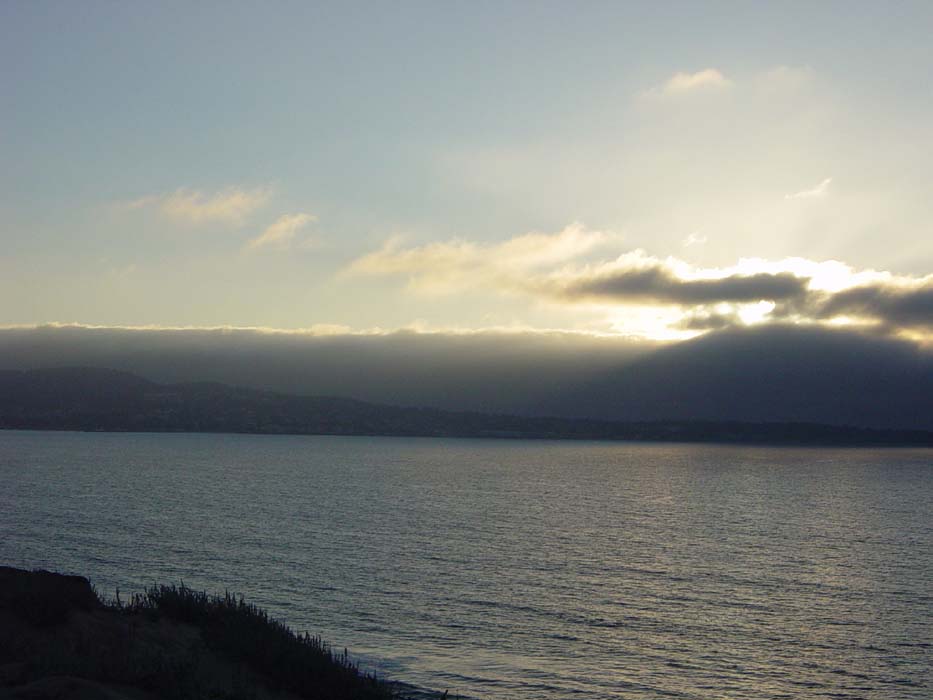 A couple of miles later I was in Monterey and started searching for that hotel, but got misled by one of those streets that changes names after a couple of blocks. I was looking for one name and when I rode past, it was another, so I completely missed it and had to backtrack back and forth a couple of times until I got to the right place. By this point it was pretty dark, and of course the hotel I wanted was full. The one next door was only $5 more so I just stayed there. Ah well, at least it's comfortable and has good Internet, and the website's working again so I can do some uploading.

Tomorrow, I need to get up early and get to a bike shop to repace my rear tire, which has worn through to the lining in several places. This is the same tire I replaced back in Port Angeles, so it's lasted a pretty good while with all that extra weight on it. Since there will be no bike shops for several days as I proceed along the Big Sur coast, I'd better get that fixed right now instead of waiting. Also, that same coast will challenge me with lots of nasty hills. I've managed to avoid them for a couple of days but now it's time to face them once again. I can't wait. (sigh)