Every now and again while on this trip I receive emails from people I've met along the way or who are following me for one reason or another. A couple of days ago I received one such email that really made me feel great, on top of the world even. Even better, it let me know that some of what I'm doing is having a positive effect on others...motivating them in ways I couldn't have imagined or predicted. Just knowing that helps me get moving on the tougher days, and I definitely needed that kind of boost this morning.

The temperature was about 50 degrees Fahrenheit and not expected to rise higher by more than a few degrees, plus the forecast called for nonstop rain all day long, as well as 10mph east winds...basically the trifecta of bad cycling weather. Add to that the extremely jagged-looking elevation map (you can see it on the left side of the image above) and this would not exactly be an easy day to get through. I could at least console myself with the idea that the winds weren't that strong, and maybe the trees would help like they did yesterday...but that's not much to get you going in the morning. It didn't help that a biker club decided to stay in my motel last night, and they started gathering outside at around 6am, talking very loudly and making it impossible to get back to sleep after my inevitable early morning bathroom run.

I finally convinced myself to get up around 9am, went through the morning rituals, and got out the door just before 10. The rain was light early on and I made a quick run about a half mile back into Gladewater to see the one interesting thing I'd read about yesterday evening: 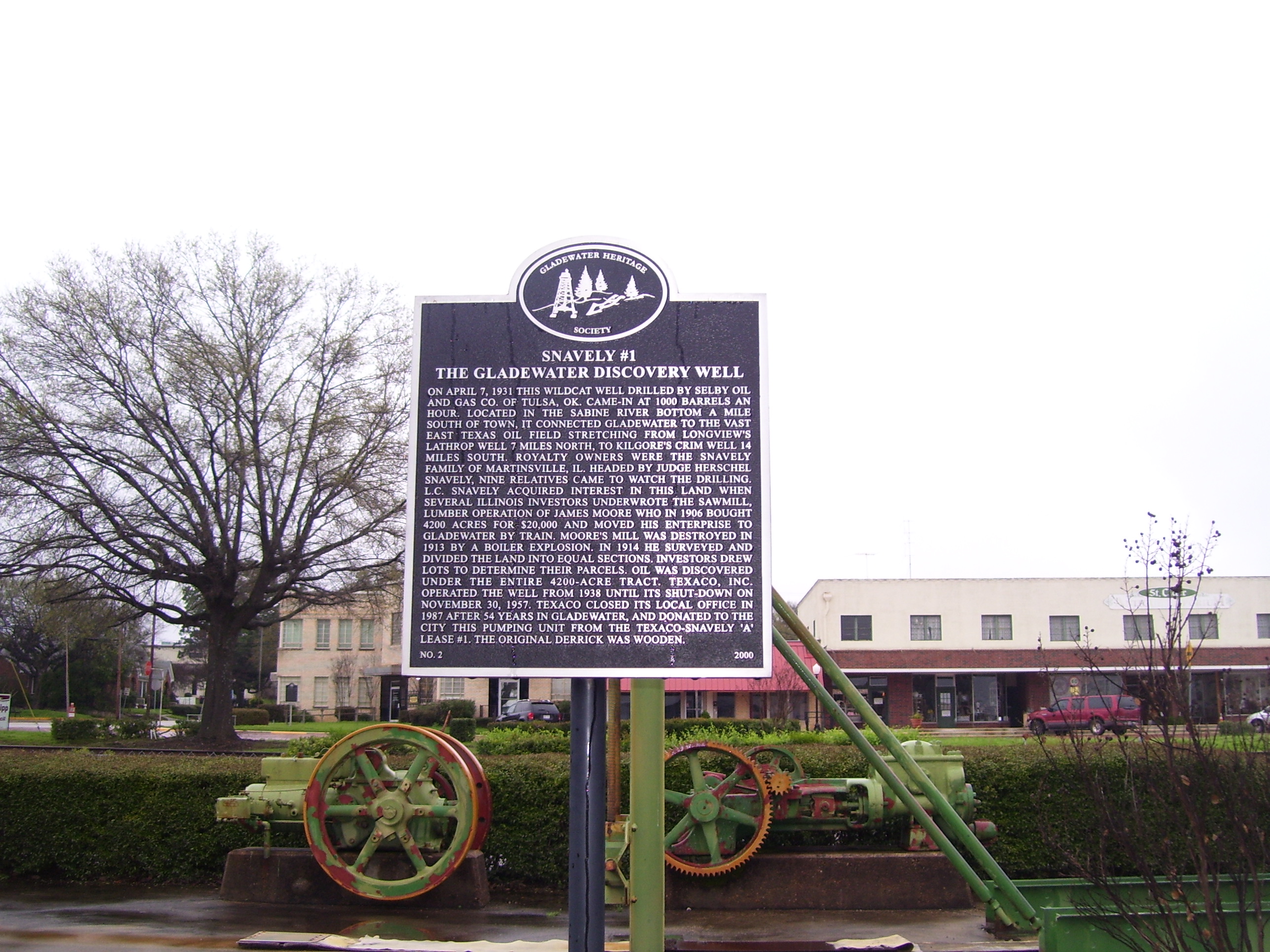 Every town seems to have some amount of local history to learn about, and that's part of what makes this trip so fun. I didn't mind backtracking a little bit, because really, I was going to get soaking wet within the hour anyway so what's another mile or two? Anyway, here's a better view of the entire pumping unit and derrick replica: 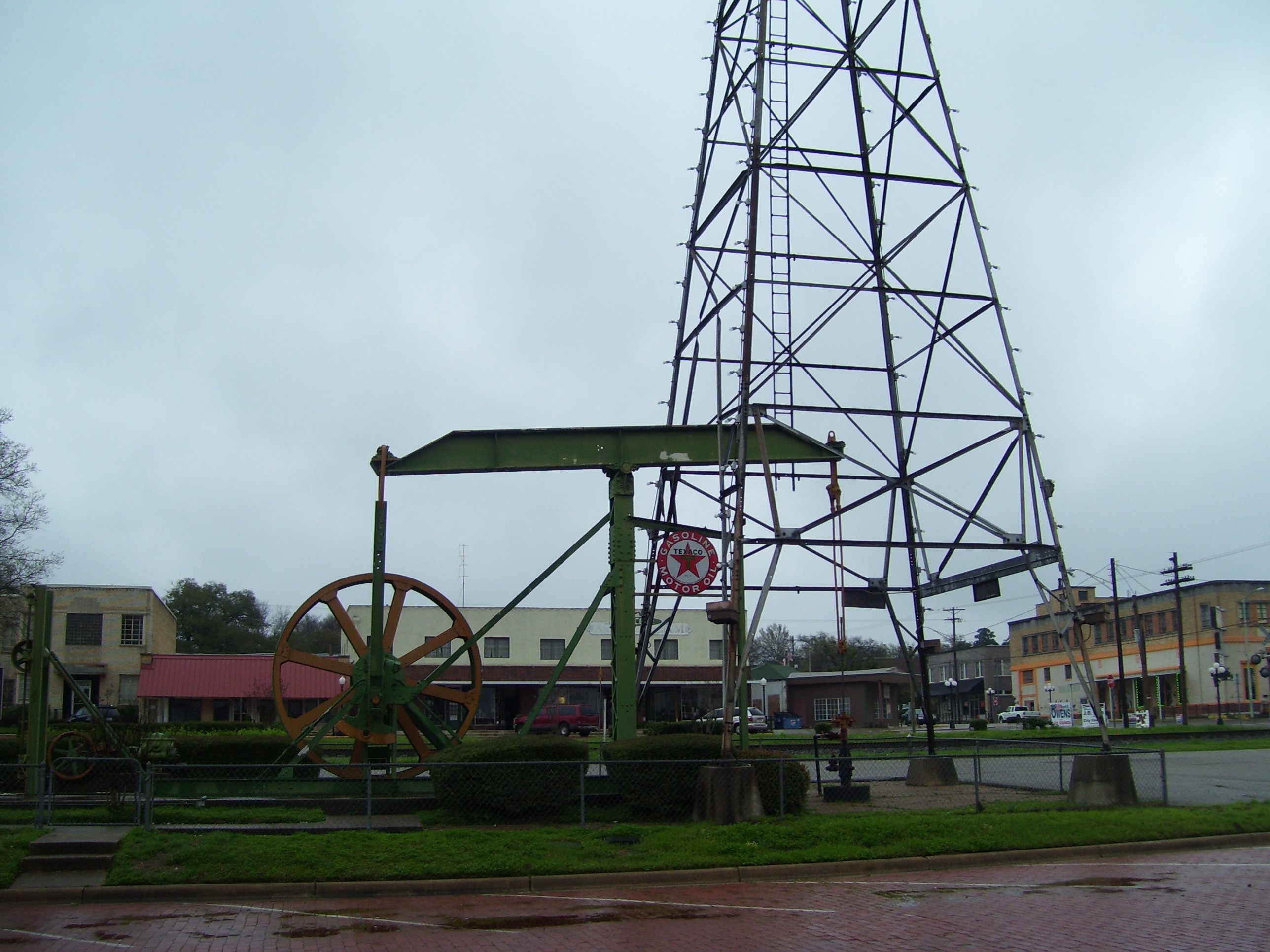 After that it was out into the rainy countryside, riding along US-80 which follows along a few miles north of I-20. The freeway soaks up most of the thru traffic, so everything on 80 was local, keeping traffic to a minimum. Plus it's a Saturday, so I really didn't have much to worry about, even when the shoulders disappeared on me (or were too rough to ride on)...about half the trip, actually.

The pictures from today aren't going to be terribly impressive, I'm afraid, mostly because of the nasty weather and yucky overcast skies. Here's the best I could do when passing what's otherwise probably a very picturesque lake: 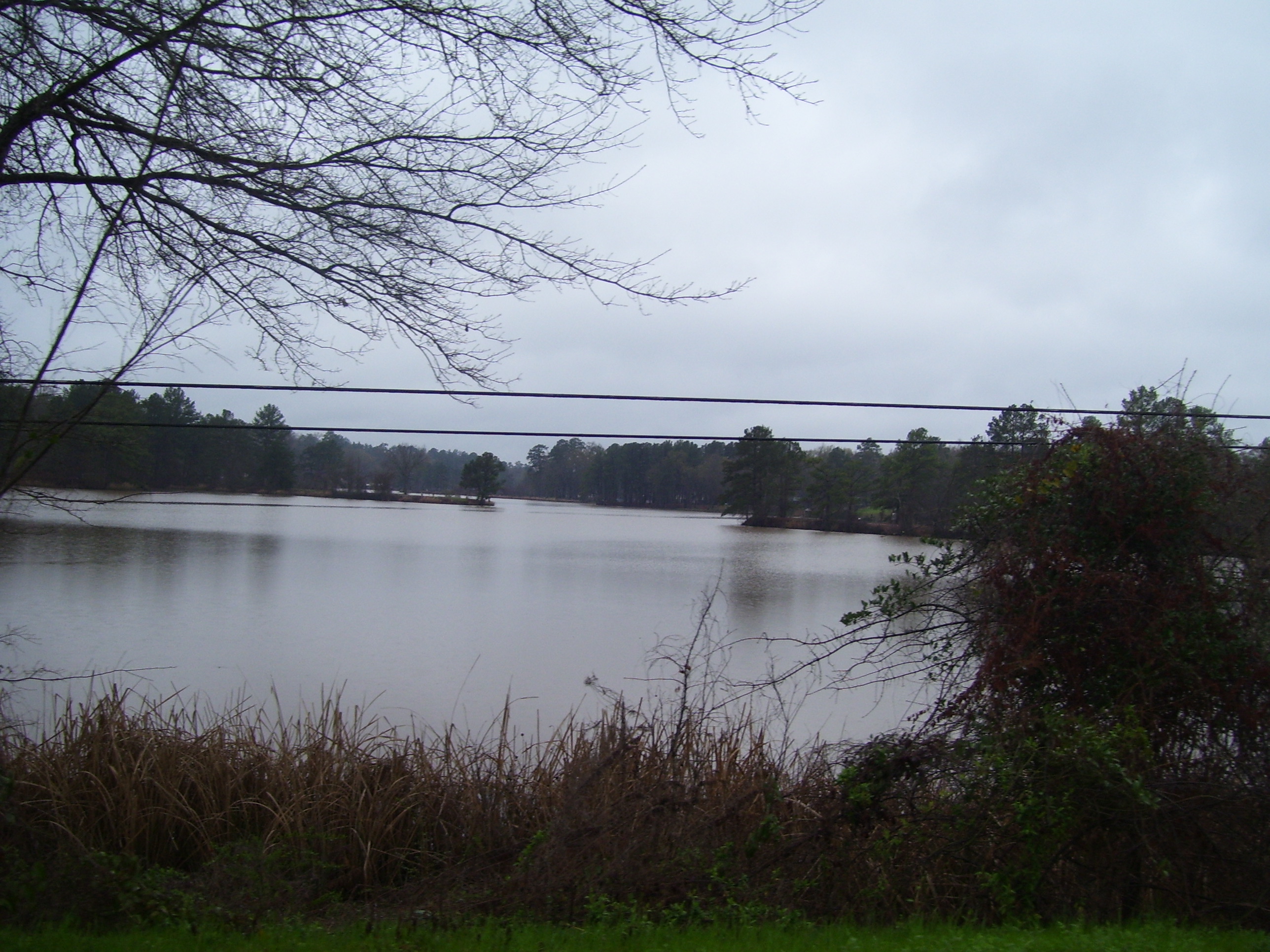 As I entered the town of Longview, I saw this place...do I really want to know what's going on here? Probably not.

Here's a shot of what the road looked like for part of the day. Plenty of trees (they really do help with the wind, I must admit), zero shoulder, very little traffic, and constant rain. The rain never let up once, not even for a moment. 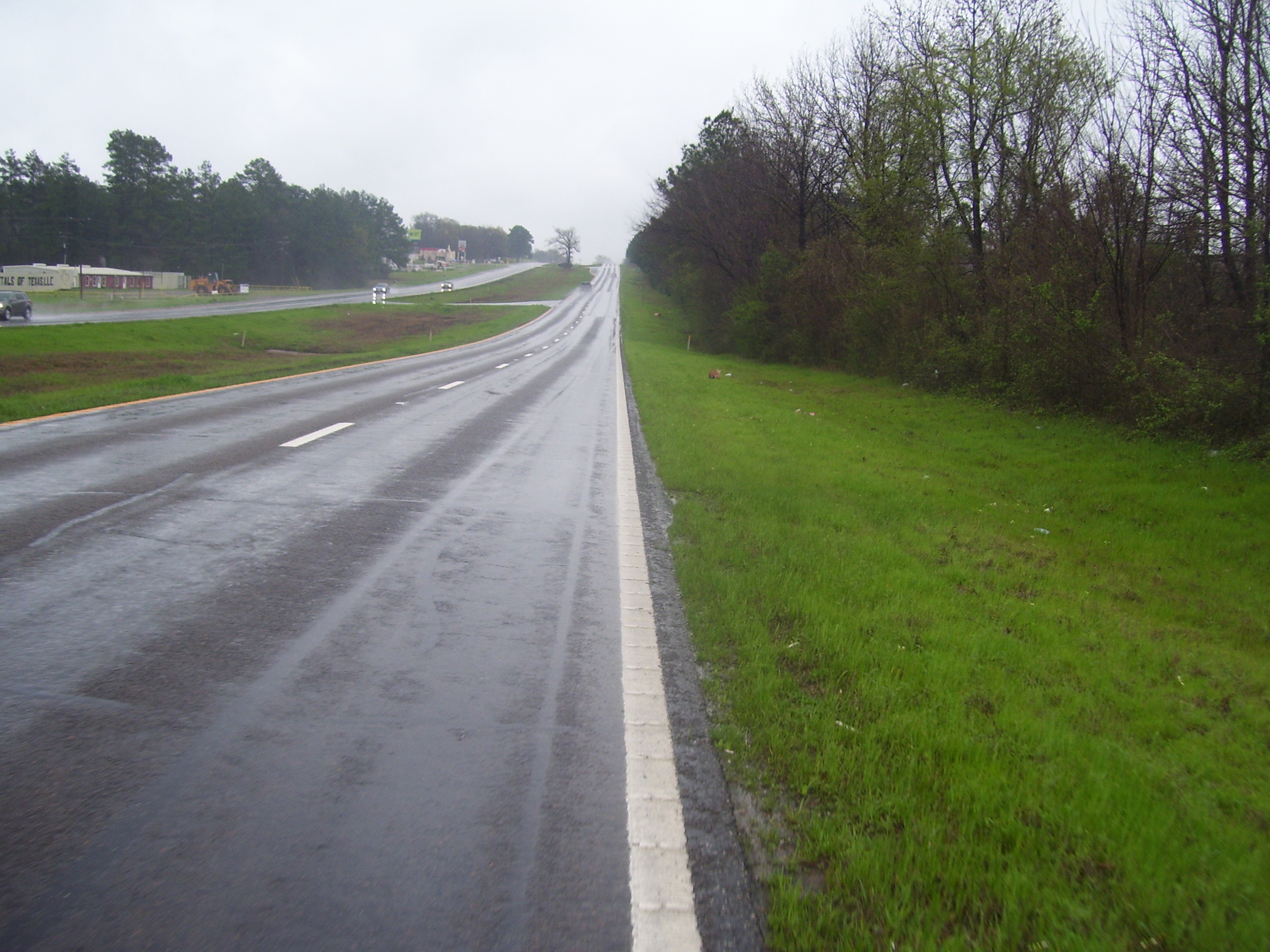 Here's another place I went by that probably looks much better in nicer conditions. This is someone's ranch, with its own fountain, lake, gazebo and everything. Must be nice. 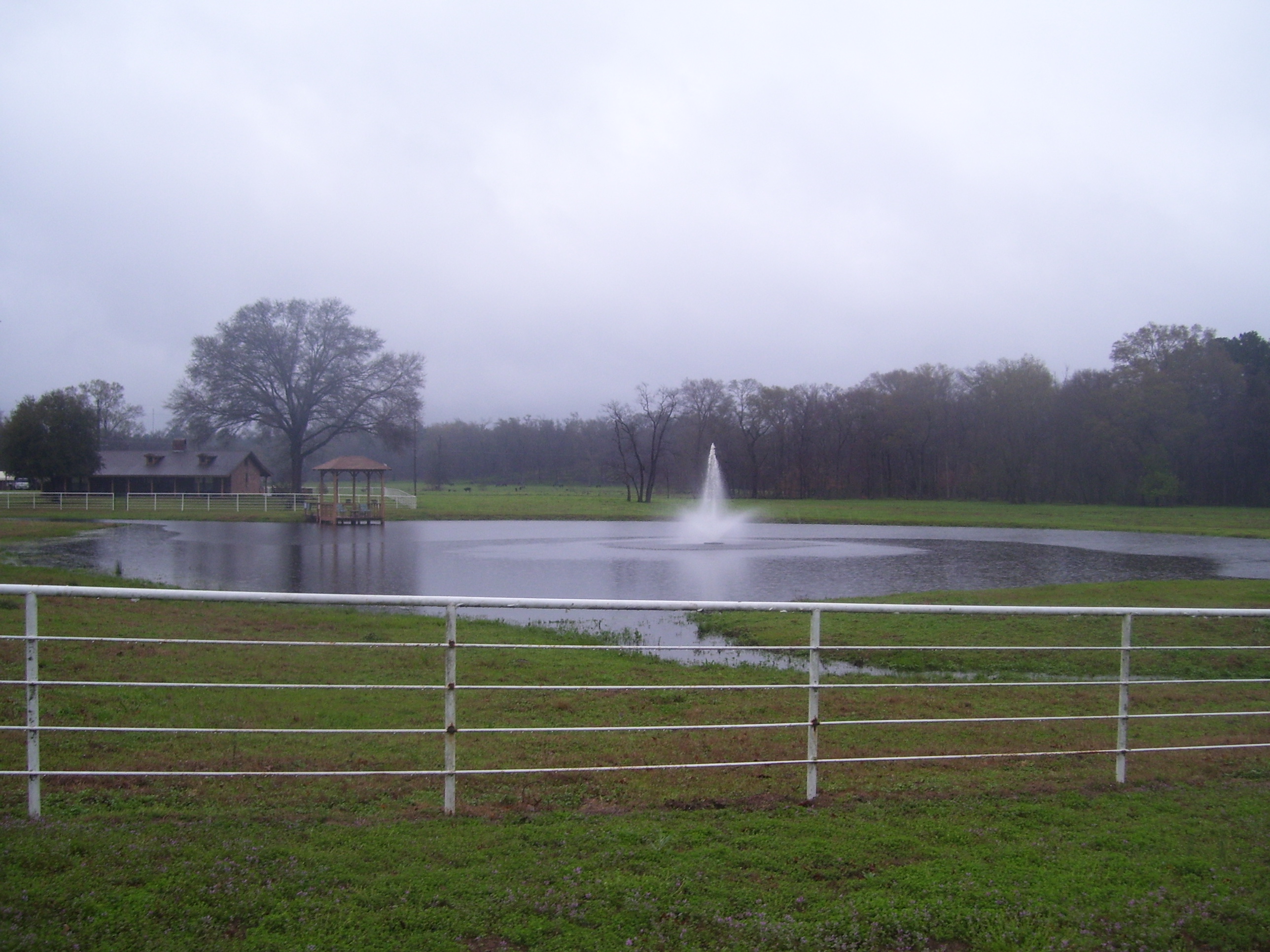 On my way towards Marshall I crested a hill and spotted another pair of touring bicyclists, the first I've seen this trip. These are Shawn and Bob, who are riding east to west from Jekyll Island, GA to San Diego, CA. Normally I would make fun of them for going east to west into the "prevailing" winds, but since right now they seem to be blowing mostly from the east for some reason, I think these two travelers have the right idea. We swapped tour blog info, took photos of each other, exchanged a couple of quick stories, and hurried on before we idled too long and got cold. (You really need to just keep moving in weather like this.) They confirmed that the hotel I was headed towards is a good choice (since they stayed there last night) and also gave me a good tip on what road to take on my way towards the Mississippi River crossing...more on that later. Anyway, here's the obligatory selfie with the two of them (Shawn on the left, Bob on the right). 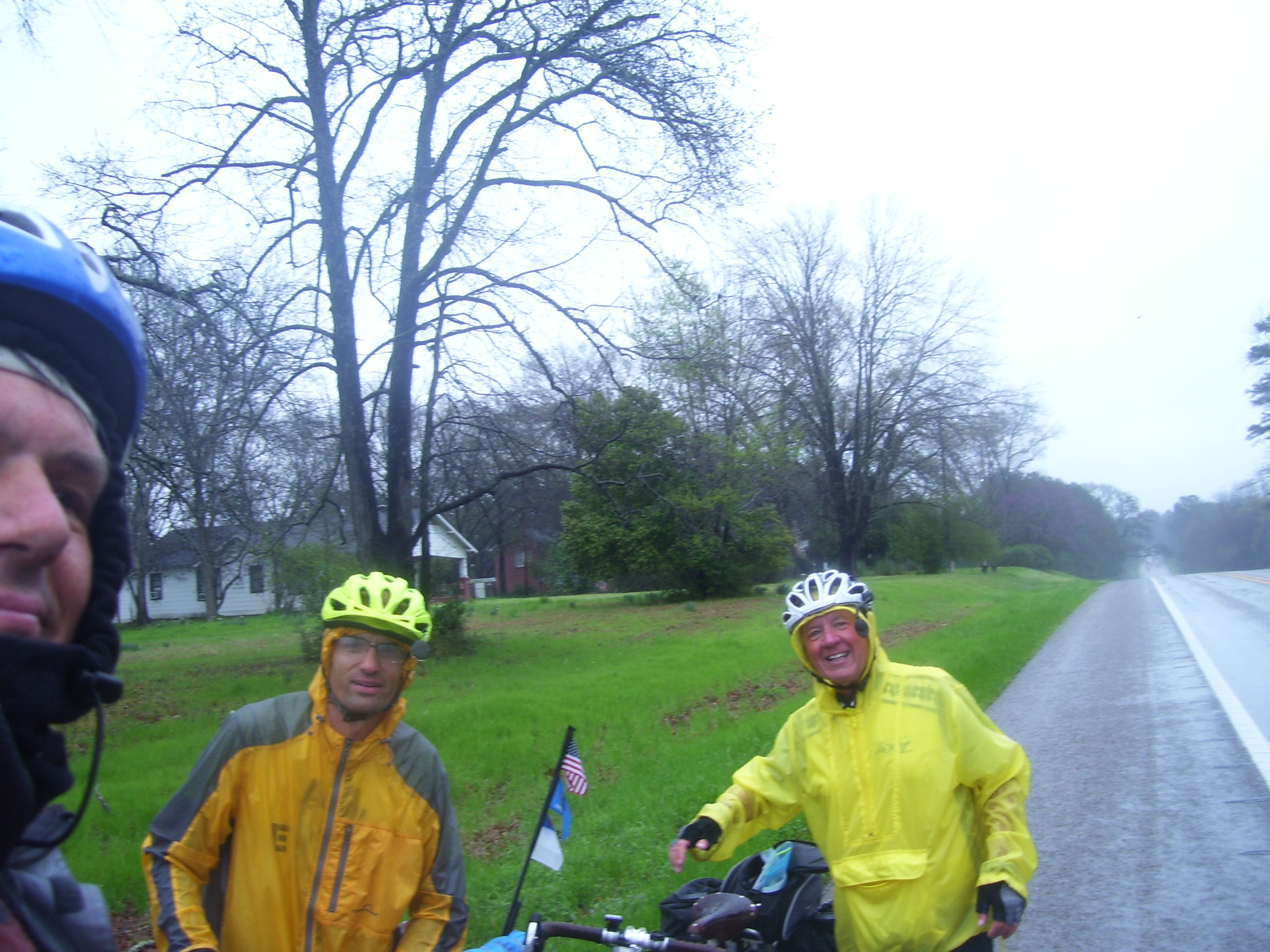 They are keeping their own daily blog which you can read and follow here: http://www.crazyguyonabike.com/doc/Shawn2015 (there, see, I'm not the only person crazy enough to try crossing the country on a bike...here is actual proof that others like me do in fact exist). Click on their entry for Day #20 for their encounter with yours truly.

One of the advantages of traveling with someone else is quickly visible in this additional photo, included for a better look at their bikes...they each have to carry far less stuff, because they can split up the gear between them. So they both look like they're barely carrying anything, compared to my overloaded ride. Also, in the interest of showing how there are other ways to do things than the way I do them, notice how they have helmet mirrors (I don't like them, but to each his own) and headlights/taillights even in daytime (I only turn mine on at dusk, to save on battery power). They are also both wearing shorts...brrrrr! And fenders...not a bad idea....something to remember for the next trip. 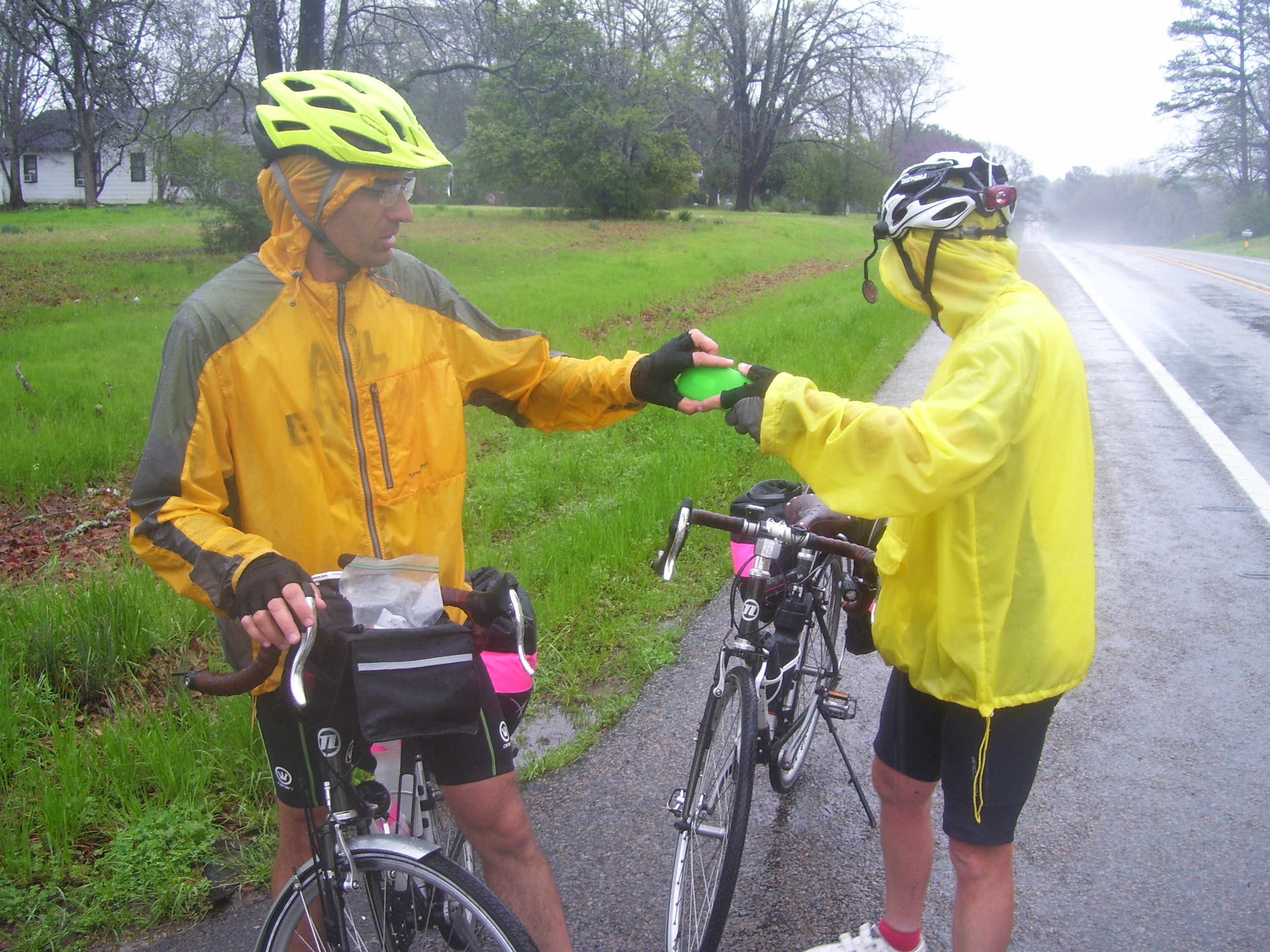 We probably could've talked for hours, but the cold was too much to bear so we moved on after just a few minutes. They had spent part of their ride on an organized cross-country route called the Southern Tier, which I'll be joining in a few days, so maybe I'll run into some more touring cyclists then. In the meantime, I pressed on through Marshall and then out into the last few miles of Texas that I'll see this trip. US-80 eventually merged into I-20, pushing me onto a service road, which as usual wound up deserted compared to the busy freeway right next door. Notice all the rain splash from the trucks...glad I'm not over there! I shouldn't have to ride on any more freeways this tour, though. Whew! 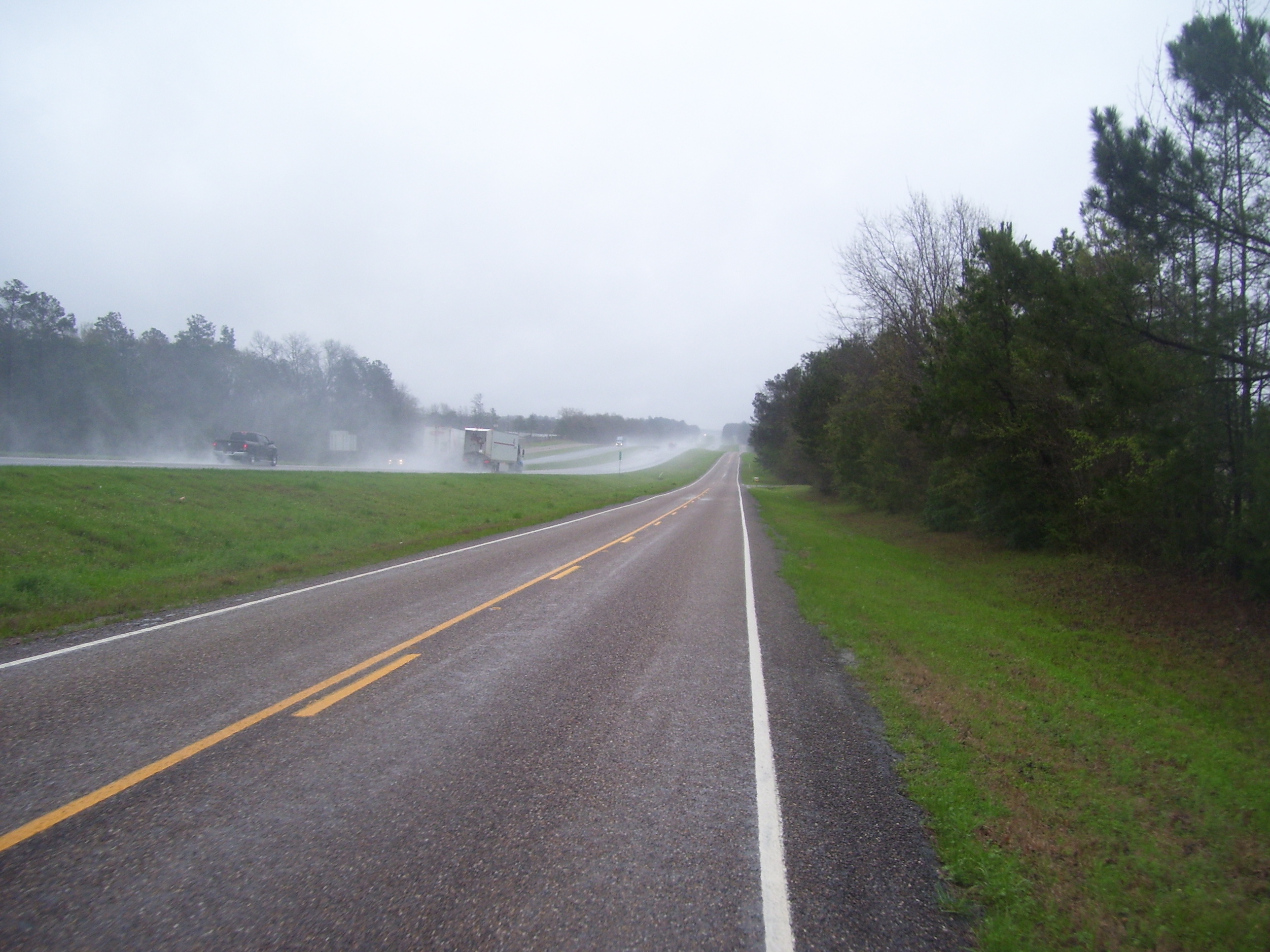 A short distance from the border, US-80 split off again and I took it right up to the Louisiana border. My soaking wet bike poses for a photo at the obligatory welcome sign: 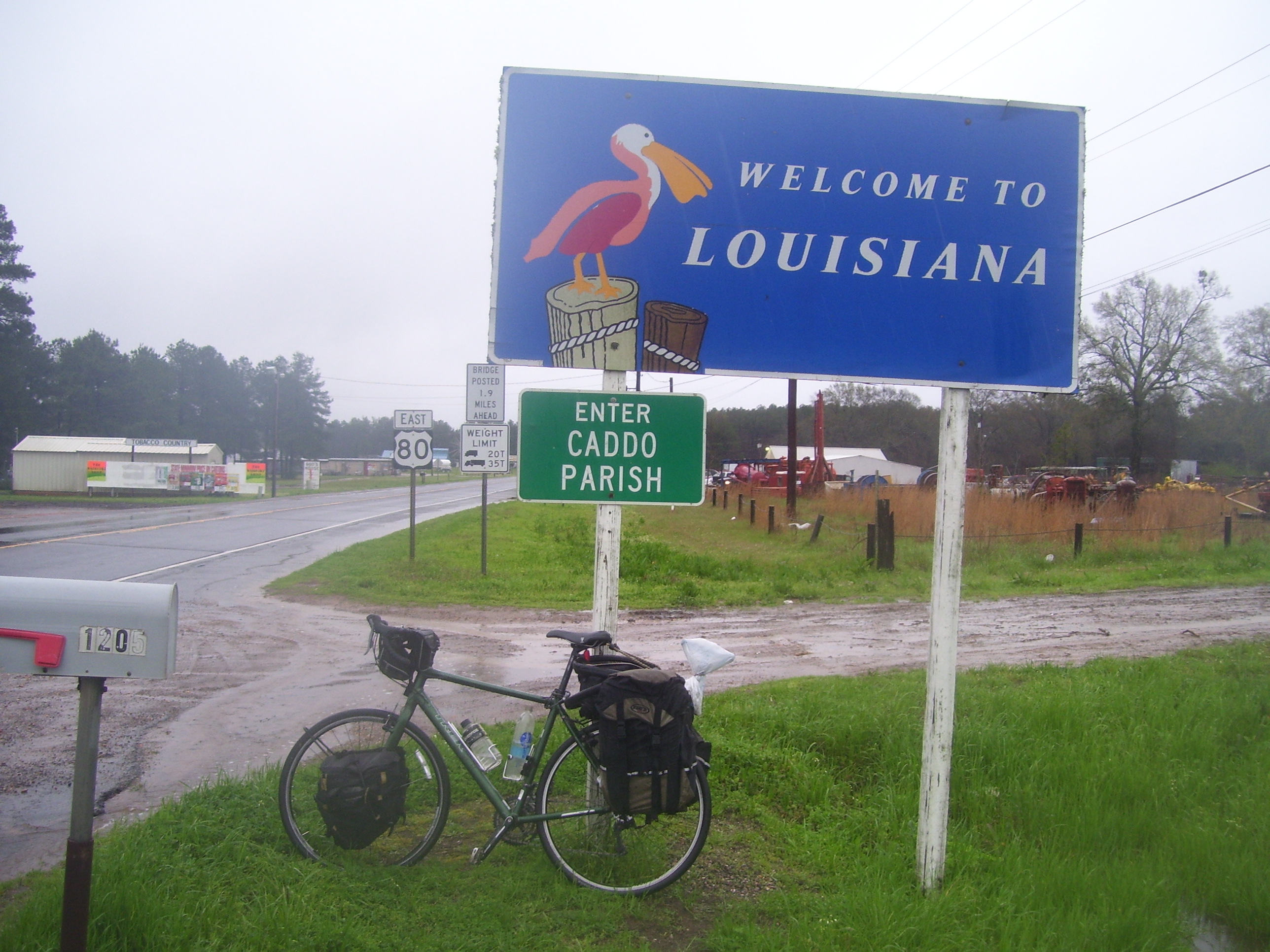 I took a selfie as well, just for fun (it's so cold, I had to put on the hood today): 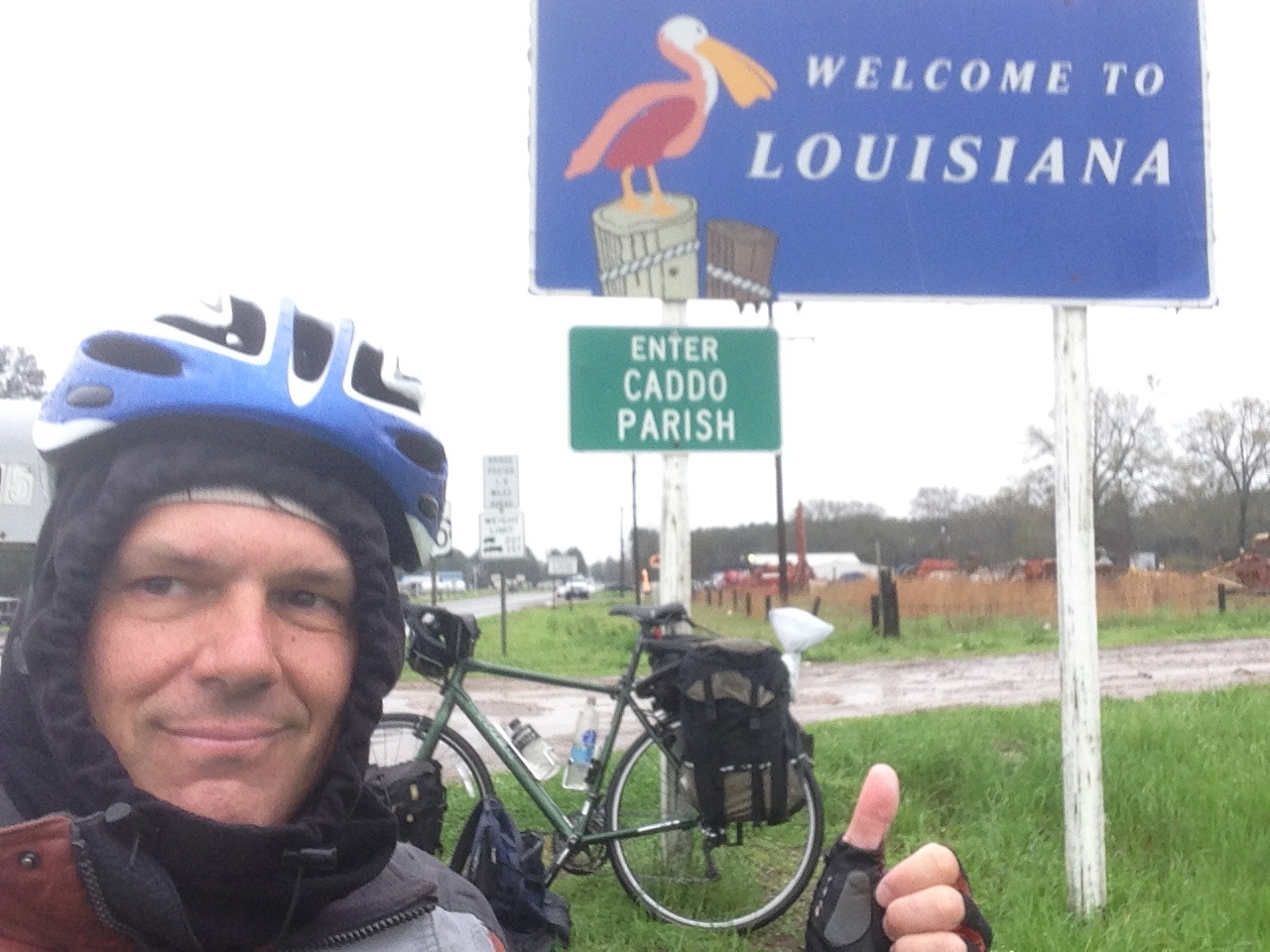 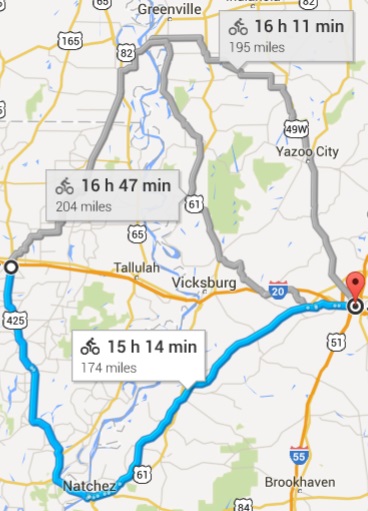 I did a much better job of waterproofing the bike this time. The computer is in its own plastic bag, and then the entire laptop case is itself inside another larger bag...a strategy that paid off, as everything made it through the day without getting even slightly moist. The clothes are all wrapped up tight as well, and I even bagged up the top of the air pump, just to be sure. Water still seeps into the panniers (there's no stopping it) but all the plastic bags keep the contents dry. You just have to assume no pannier is waterproof, and take action accordingly.

I did stop a little earlier than I'd hoped for today, just a few miles short of Shreveport, but at least I made it into Louisiana, and since I wasn't entirely sure of my upcoming route, I didn't want to go past a turnoff point by mistake. You see, last night, after posting the evening blog, I learned that there's no way to cross the Lower Mississippi on a bicycle anywhere near where I-20 crosses the river (at Vicksburg). None of the bridges allow bikes or pedestrians, and there aren't any ferries or shuttles.

To illustrate, take a look at this map section to the right, where I've tried to set up a bike route from a point west of Vicksburg to another point on the other side of the city (with the Mississippi River flowing from top to bottom in the map center). As you can see, my only choices are to cross in Natchez, or go all the way north into Arkansas and cross near Greenville. This was something that weighed on my mind a bit today, and when I mentioned it to Shawn and Bob, they both recommended the Natchez bridge, which is the one they used. So that's the way I'm going to go, I think...it's shorter, and not as hilly as the northern run, plus the winds tomorrow are supposed to be out of the north. I'm somewhat annoyed, though, that I have to ride 50+ miles out of my way just because nobody thought pedestrians or bikes would ever have a reason to cross the Big Muddy anywhere within 100+ miles of distance from Arkansas to halfway through Louisiana. I surely can't be the only cyclists who ever wanted to cross the river at Vicksburg, can I?

Anyway, I guess it's a good thing I didn't ride all the way over there to find this out at the river crossing, huh? Plus it's not like this wasn't on my original route map, so it's not as if these miles weren't built into the ride. I'll just go a bit further south and see what there is to see!