When I woke up today the rain still hadn't quit, which annoyed me since I spent so much time last night drying everything off (by rotating everything through stints hanging in front of the hotel's fan heater). I thought for sure I'd go out there and get soaked again, but as I got ready to leave, the rain degenerated into a faint drizzle that lasted maybe an hour before fading completely. Of course this left the roads wet, for a few hours, but not so much that I got anywhere near as soaked as yesterday.

I had several choices of routes to take, all of them ending in Natchtoches (pronounced "nak-ih-tesh"), a town about 80 miles southeast by highway, and a little farther by bike since I didn't intend to get on the freeway again. A dream ride might've carried me into Winnfield, another city 30 miles further, but that wasn't happening today. I did have some light tailwinds, which at least weren't pushing at me like they have the last few days, but except for about 20 miles in the middle of the ride, the winds were blunted by the trees...so I guess you get the good with the bad, sometimes. At least it wasn't nearly as hilly as yesterday, with the total elevation gain coming in at under 500 feet for the entire ride. Actually, that's probably the easiest day I'm going to have (terrain-wise, anyway) for the rest of this trip, so I definitely appreciated it, especially after yesterday's rain-fest.

I began the ride by heading on into Shreveport, or at least the southern edge of it. Here's what the roads looked like as I paralleled I-20 for a bit on my way due eastward: 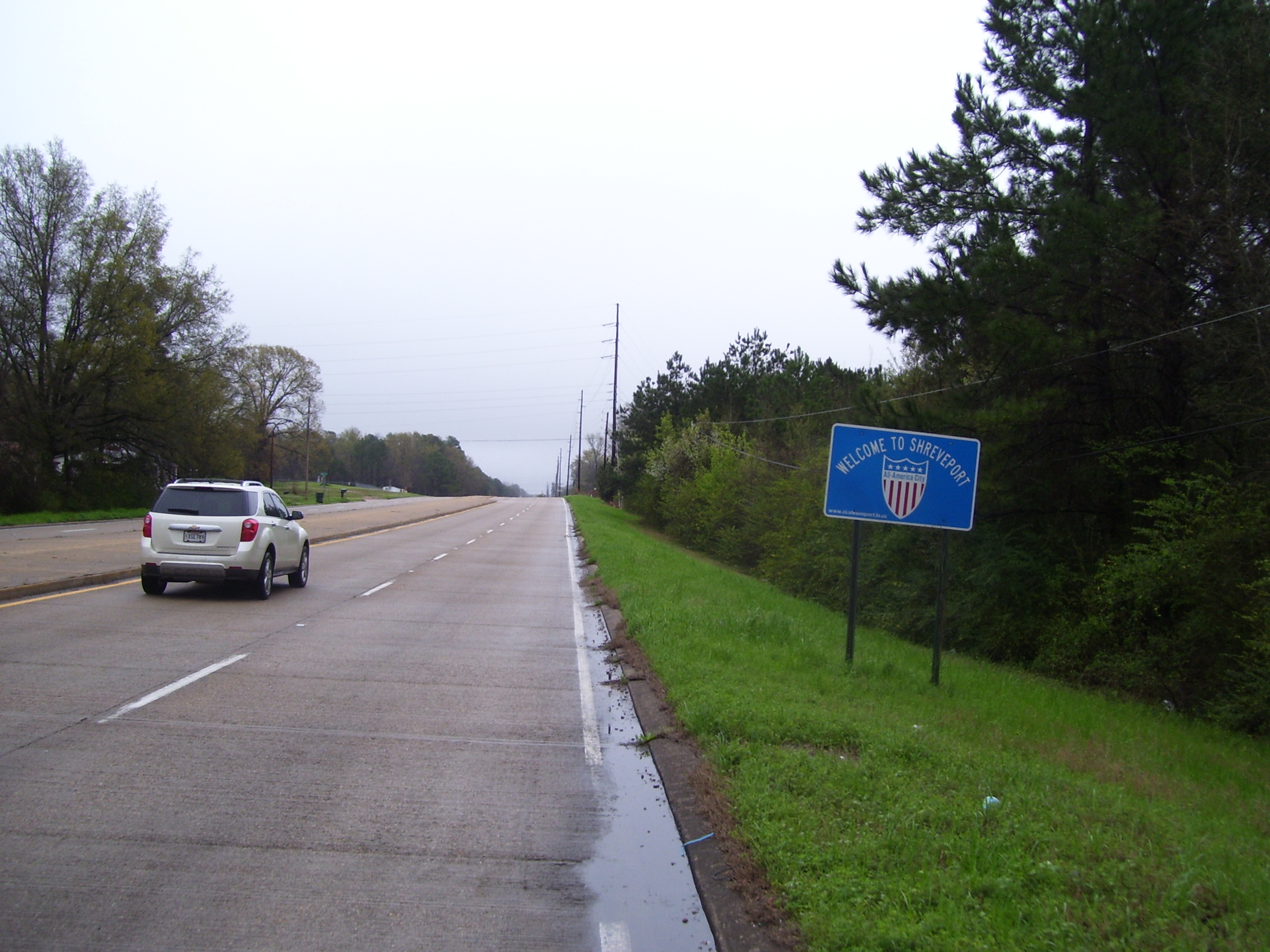 The ground's wet, obviously, but the drizzle had finished by this point and the roads were lightly traveled since it's a Sunday. Fortunately some restaurants were open, as I had lunch at a Raising Cane's, the second one I've seen this trip. Shortly after that I crossed over the Red River (yep, the very same Red River from back in Texas, which back then had no water in it...well, things have changed a bit)... 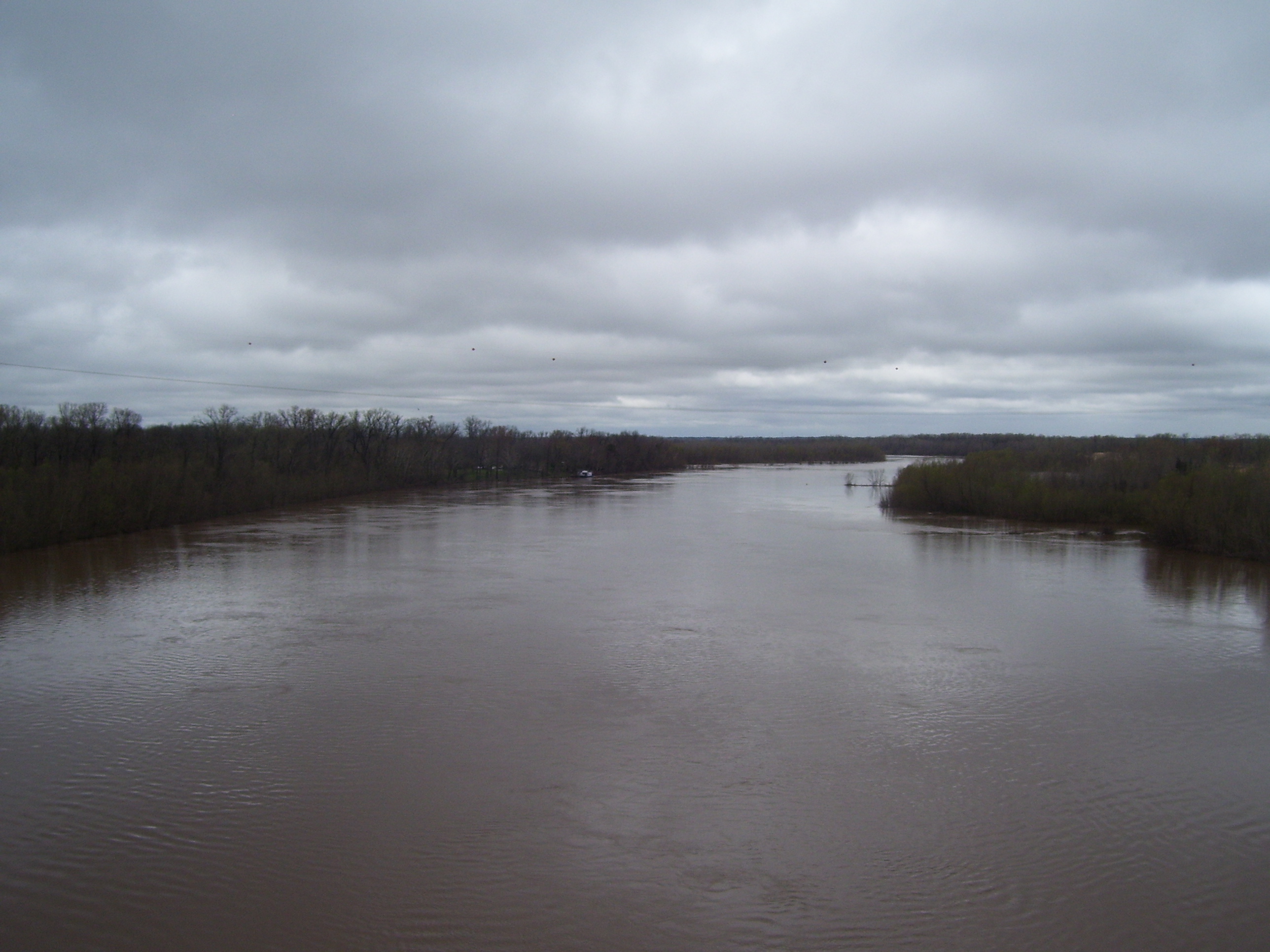 The bridge I used for this crossing wasn't exactly very safe-looking, but of course I couldn't resist stopping for a couple of photos. Here's what the bridge itself looks like...a couple of coats of paint and it'll be good as new! 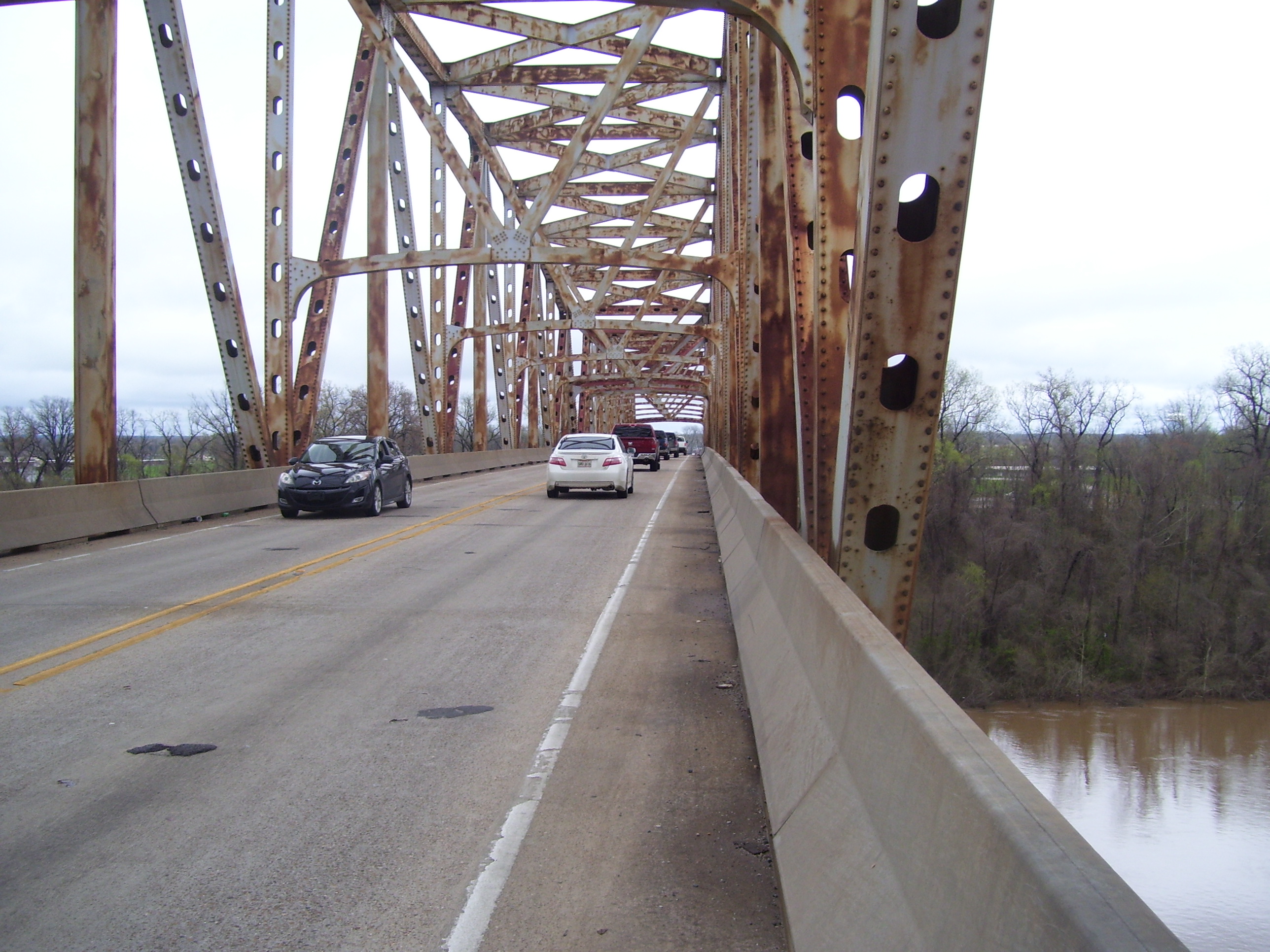 I spotted this place on my way out of town...it's a 100% automated alternative fuel station, where they sell "flexfuel," which is 85% ethanol. You can't put this in standard car engines, and they had all kinds of warning signs posted about that. In the couple of minutes I hung around here looking for a peskily well hidden geocache, I didn't see a single customer come in. Check out those prices, though...can't beat that. 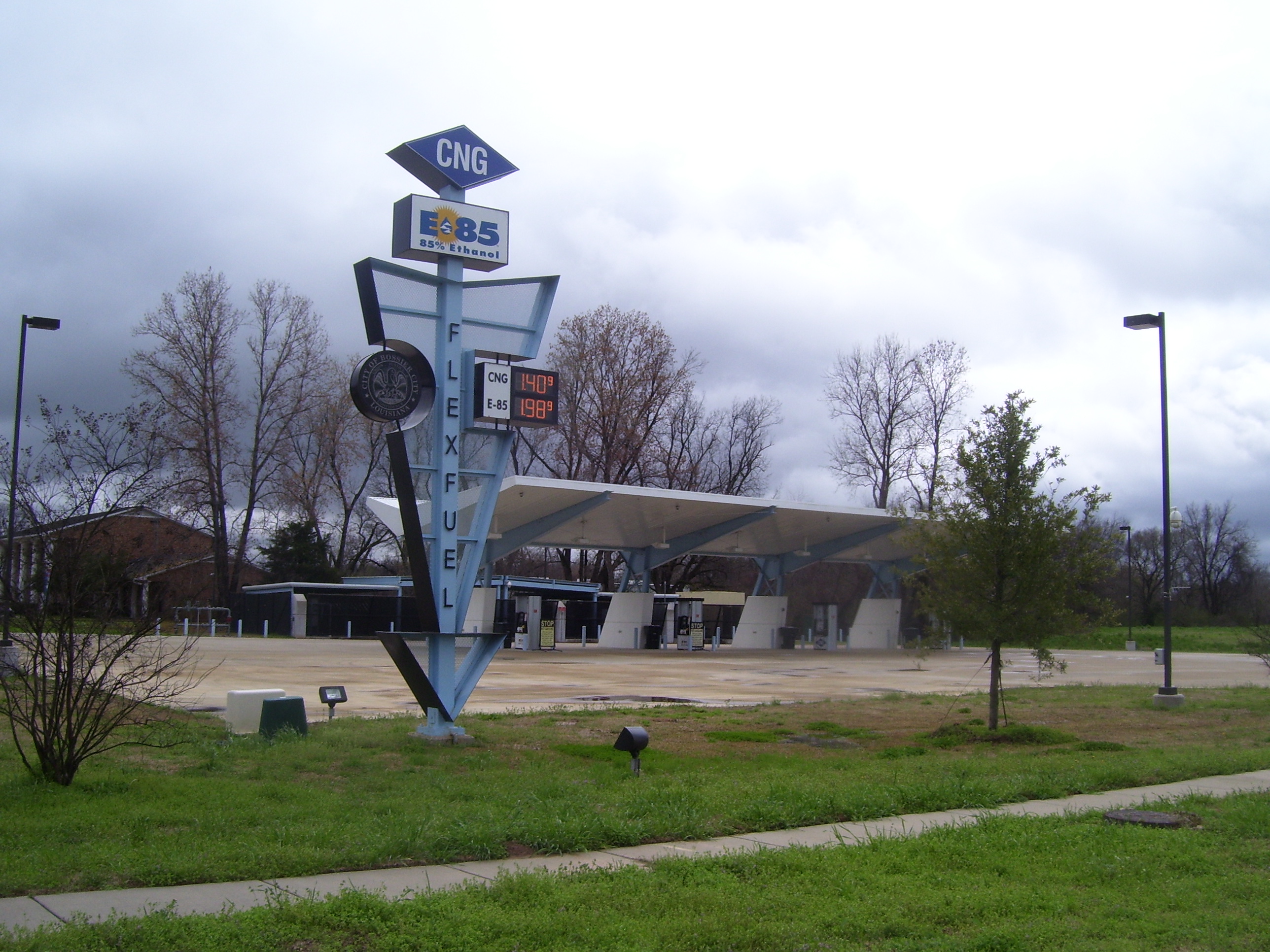 After crossing the Red River and escaping out the east side of Shreveport, my route angled southeast on state route 71, which is the one recommended to me by the two other cyclists I ran into yesterday. They told me it was a great road with hardly any traffic. For a short while I wondered if this was the same road (check out the awful shoulder in this photo, with that rough surface and cracks full of weeds) but it got much better after a few miles. Even when the shoulder wasn't comfortable, I just stayed on the white line and it didn't seem to bother anybody. The lane's wide enough that cars could go by me without having to cross over to the other side. 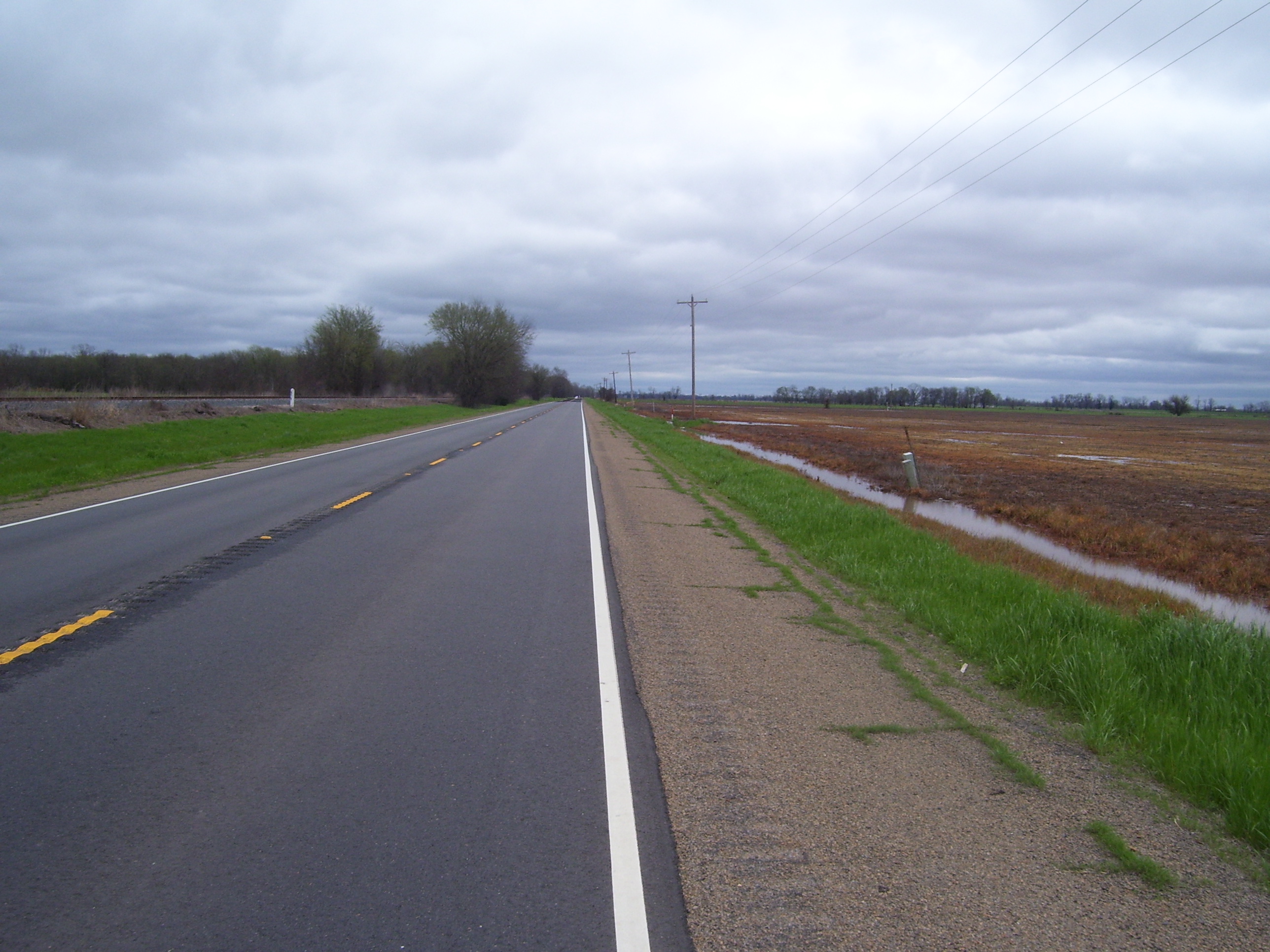 Aha, now things are starting to look like Louisiana. I saw quite a bit of this, but also farms, pine forests, open land and all sorts of other terrain today. 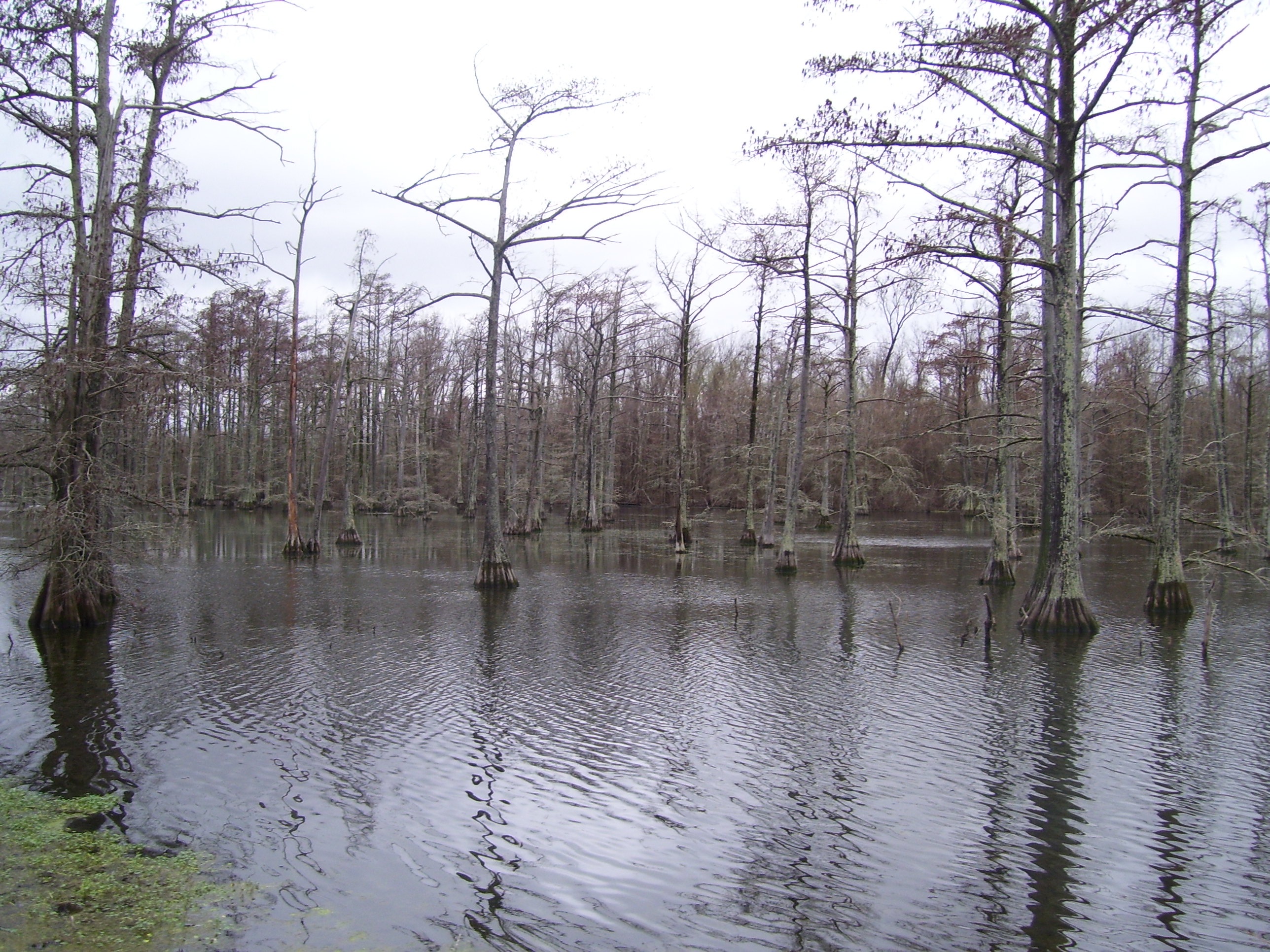 I crossed over another river later and you know, I think it might've overflowed its banks just a little. That's a good indicator of how much rain they've had here the last few days. Fortunately for me, I never ran into any flooded roads. 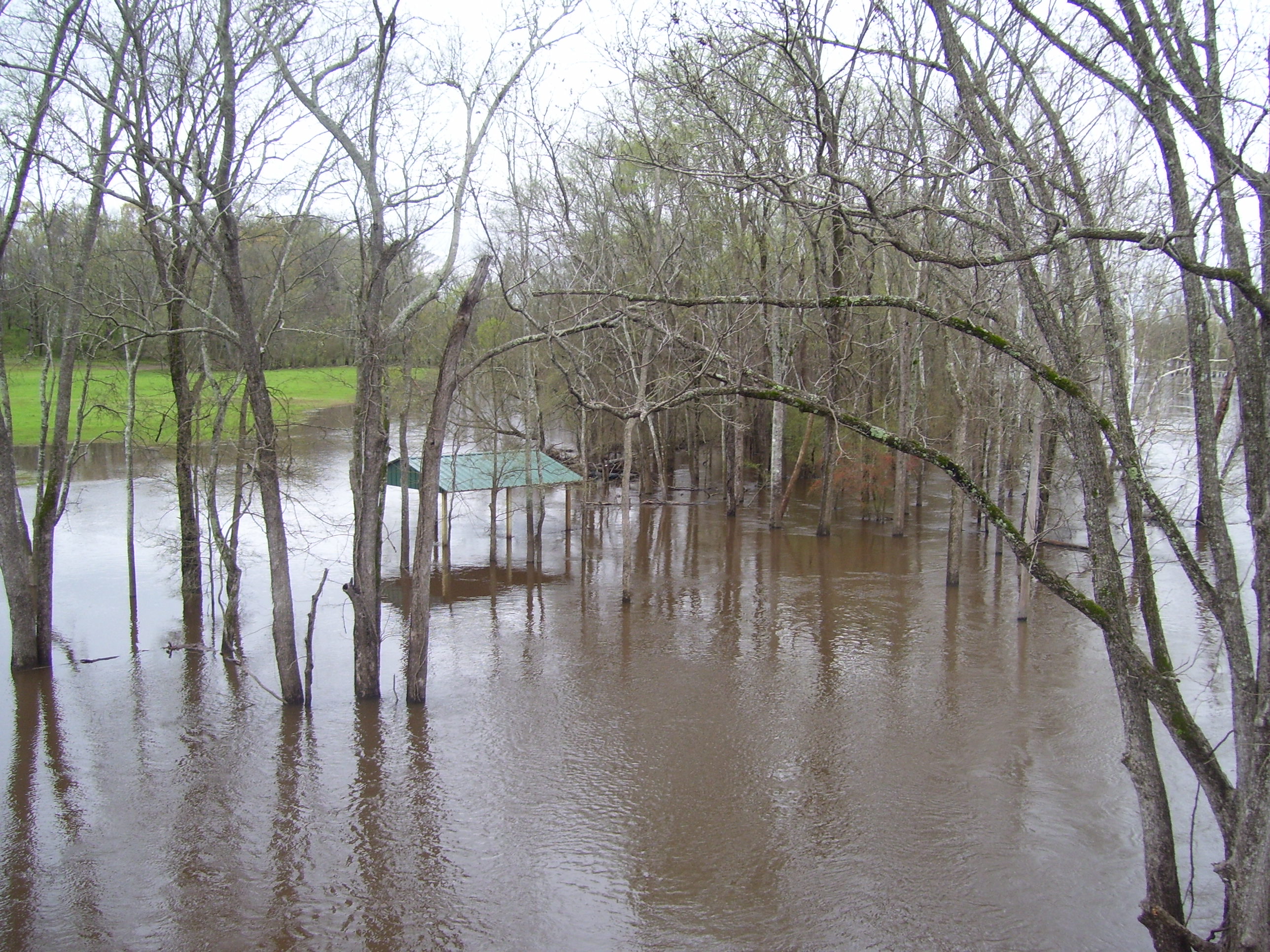 Here's the random historical marker for today. I'm starting to see these Civil War related ones now, so expect to see more of them in the future. 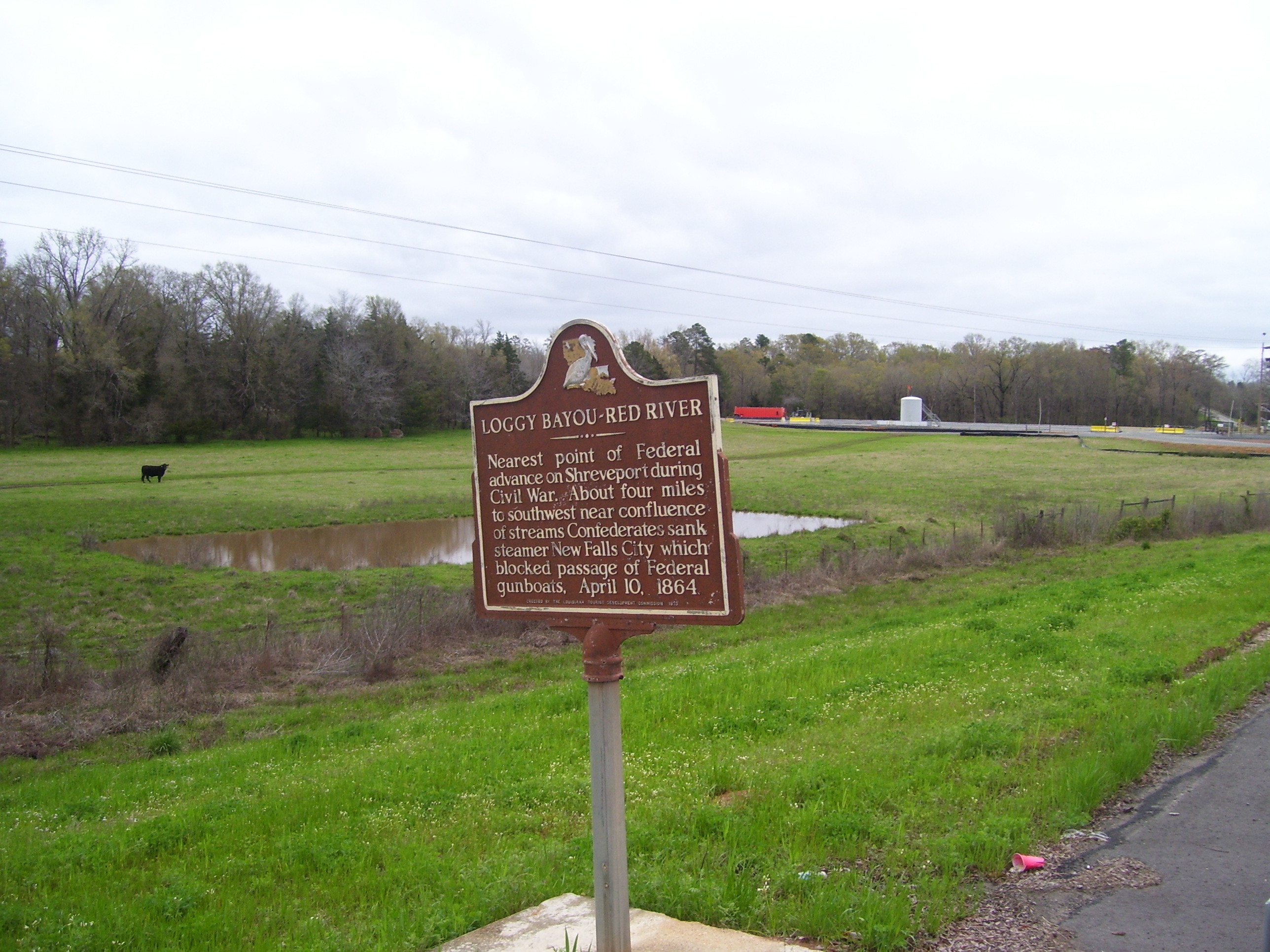 For most of the afternoon I passed through rural areas and the occasional small town. While many of these had modern homes in decent shape, there were also quite a few run-down, dilapidated shacks (some of which I really couldn't figure out how they were still standing). Here's at least one instance where it looks like somebody took steps to at least try and improve on what would otherwise be a terrible eyesore on the outskirts of town: 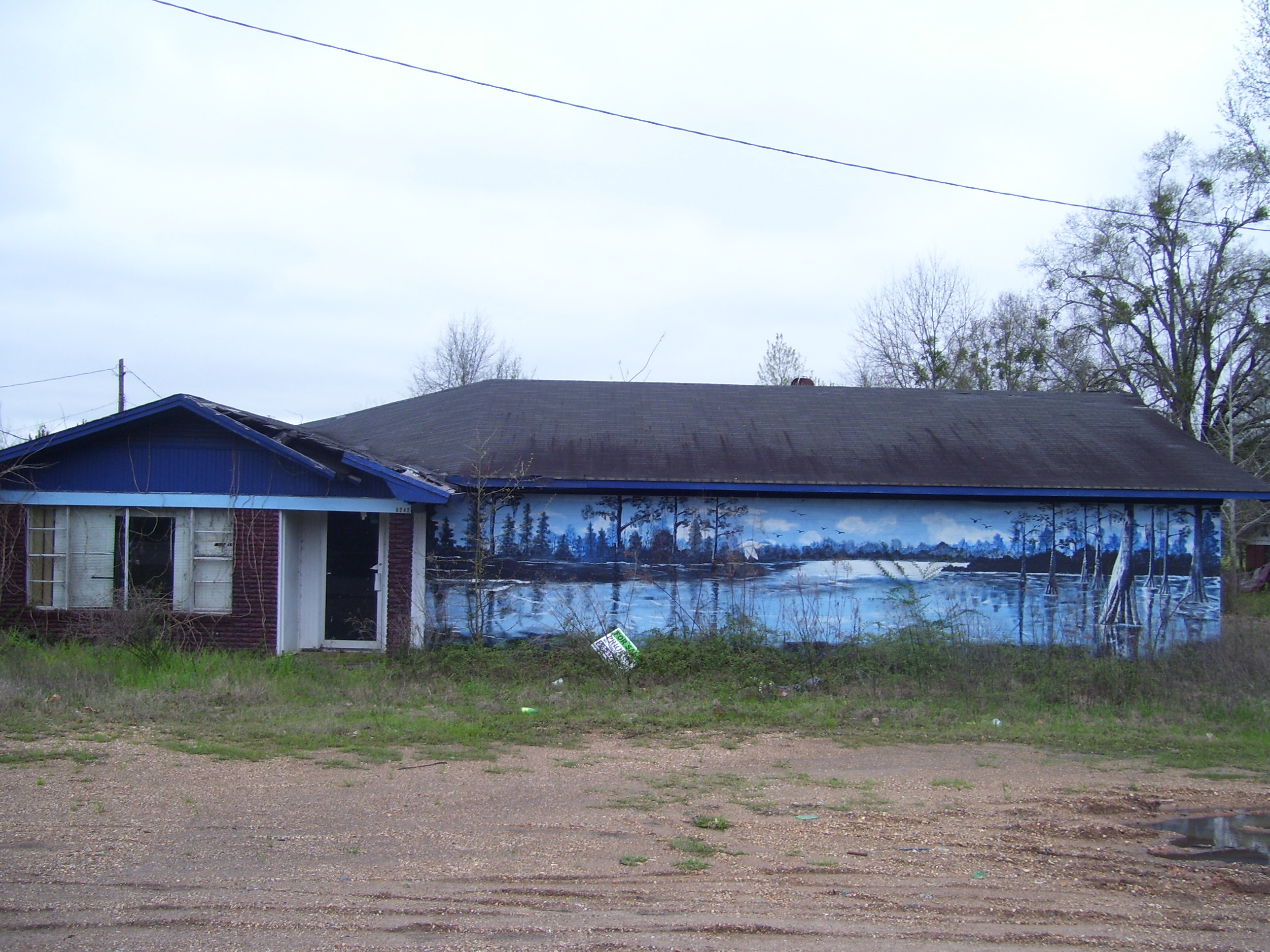 The house is a ruin, basically, but somebody took the time to paint an outstanding mural on the side of it. Very cool. I was impressed.

Anyway, heading onward, my route basically followed the Red River for most of the day, and at one point I came to an actual port. Here's a set of cranes that must be there for the purpose of pulling out lumber that's delivered by river. I wonder if they just shove the logs in the water and let them drift on downstream for collection later? Anyway, if anybody needs a gigantic pile of wood, this is the place. 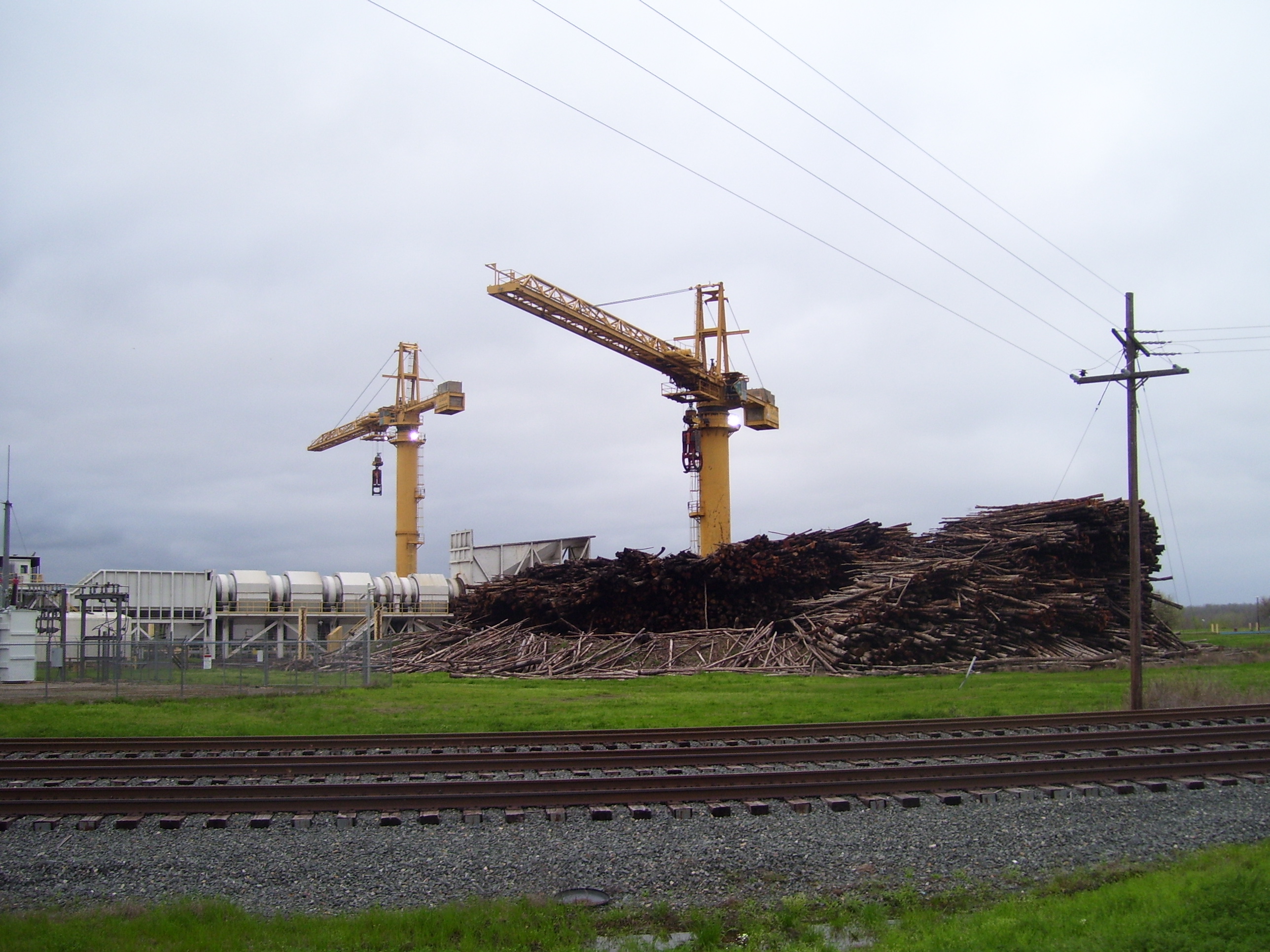 The route crossed me back over the Red River just before Natchitoches, and here the bridge was extremely long, so I stopped and tried taking a pair of pictures side-by-side. They don't quite fit together properly, but here's what the river looked like from the middle of the bridge:

By the time I rolled into Natchitoches, the sun had almost set, but then I did ride nearly 100 miles today, so I shouldn't be too surprised. They had several hotels in town, but most were all the way over by the highway, and since my route tomorrow takes me back out the way I came, I just stopped at the first one I came to, which cost me $60 (just about the most I've paid for a hotel this trip). At least it has guest laundry, because the time has come for that again and I shouldn't put it off. As I write this I just retrieved everything from the dryer and it's all clean again...finally! Now to get some sleep!