Tom drove down from Lacey to hang out for the day, so we decided to see the sights in Astoria. First off, some of you might remember that many of the landmarks seen in the movie "The Goonies" are located here. For example, here is the Goonies house. Unfortunately, it's a private residence that doesn't give tours (not that I expect the interior to look anything like the Hollywood version) and the people who live there are unsympathetic to tourists. There are signs warning that you can take pictures, but not to trespass. This was as close as I got. Funny, I don't remember those flags in the movie... 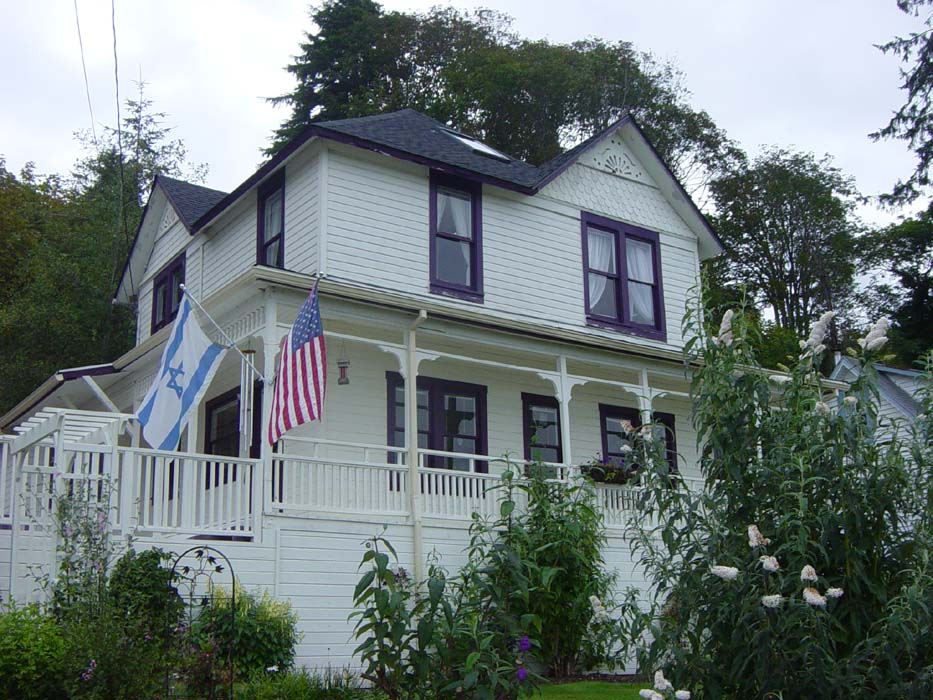 So that was 5 minutes of the day taken care of right there. What next? Well, we were already up on the hill a good ways, and there was something that looked like a lighthouse visible way up on the ridge above. Turns out this is called the Astoria Column, and is actually a memorial engraved with images depicting various events in Columbia River history (Astoria sits on the mouth of that river, if you didn't know). Here's a shot of the actual column itself. You can see some of the intricate art carved into the surface, including images of presidents, sailing ships, railroads, Native Americans, and much more. 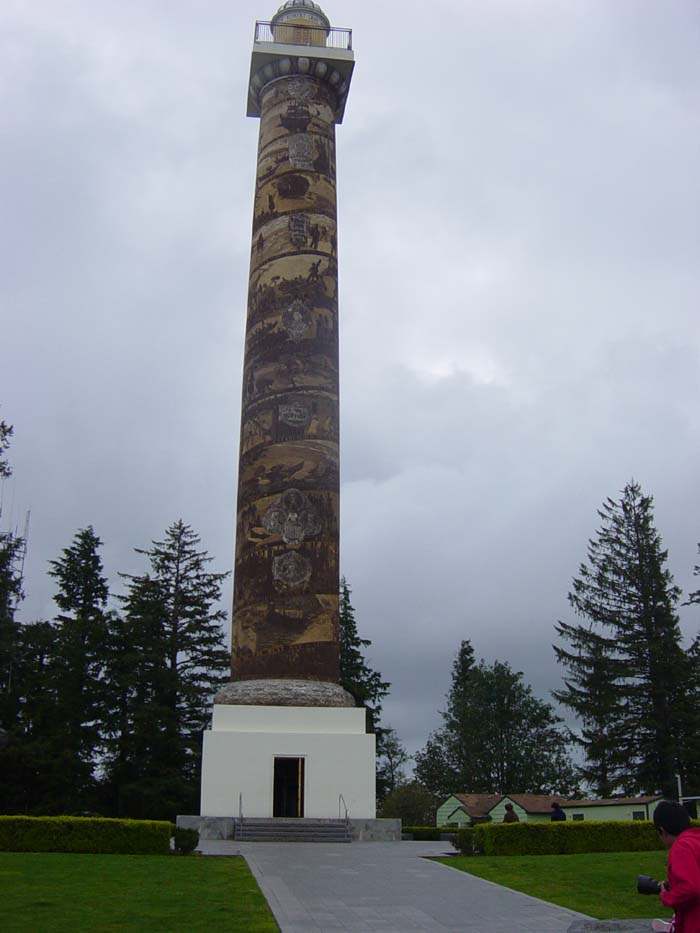 Here's another shot looking up at the tower from almost directly underneath. 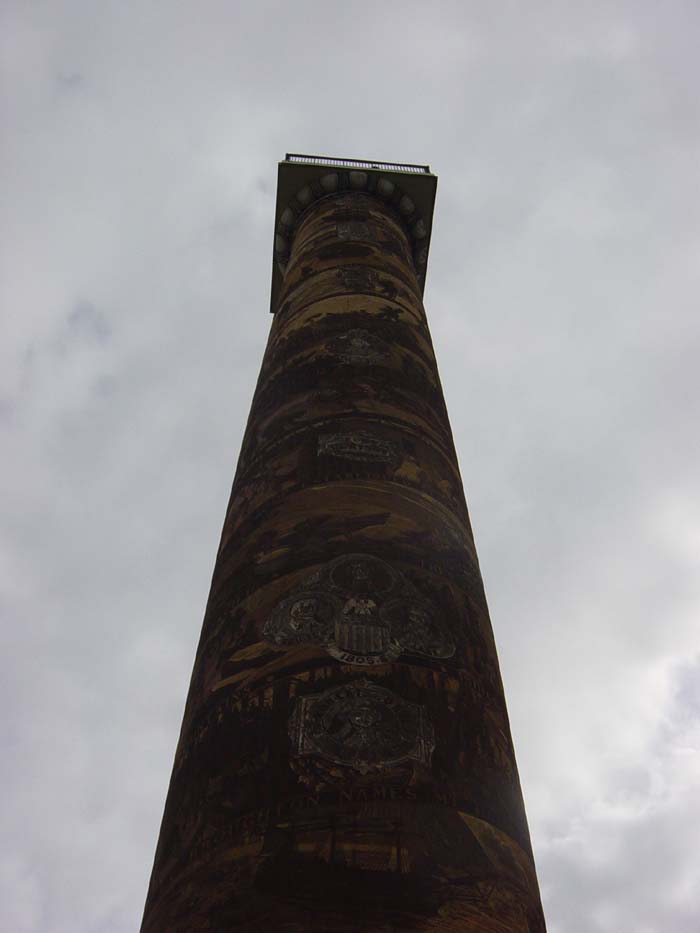 Next up we climbed the stairs inside, which went up 160 steps and made me very, very glad I hadn't climbed the hill up here on my bike today. For some reason, I can ride all day but climbing stairs destroys my knees. Must be getting old, or something.

Anyway, the views from up top were amazing, well worth enduring the cold wind buffeting us from the northeast. Here's a look at the Columbia River entrance from way up here: 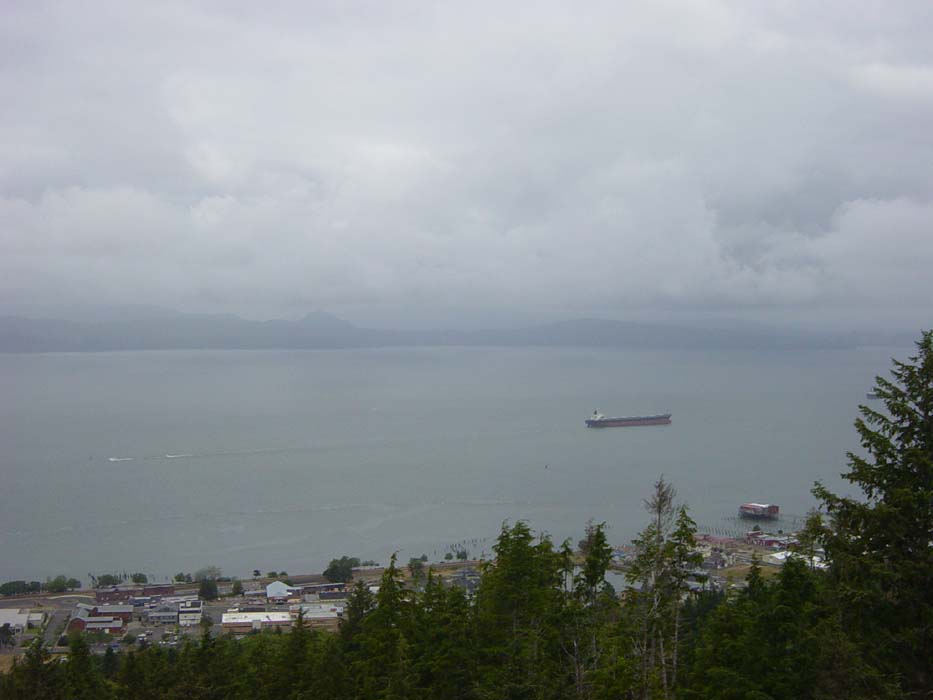 Just to the left of that, here's the majority of Astoria as well as that accursed bridge: 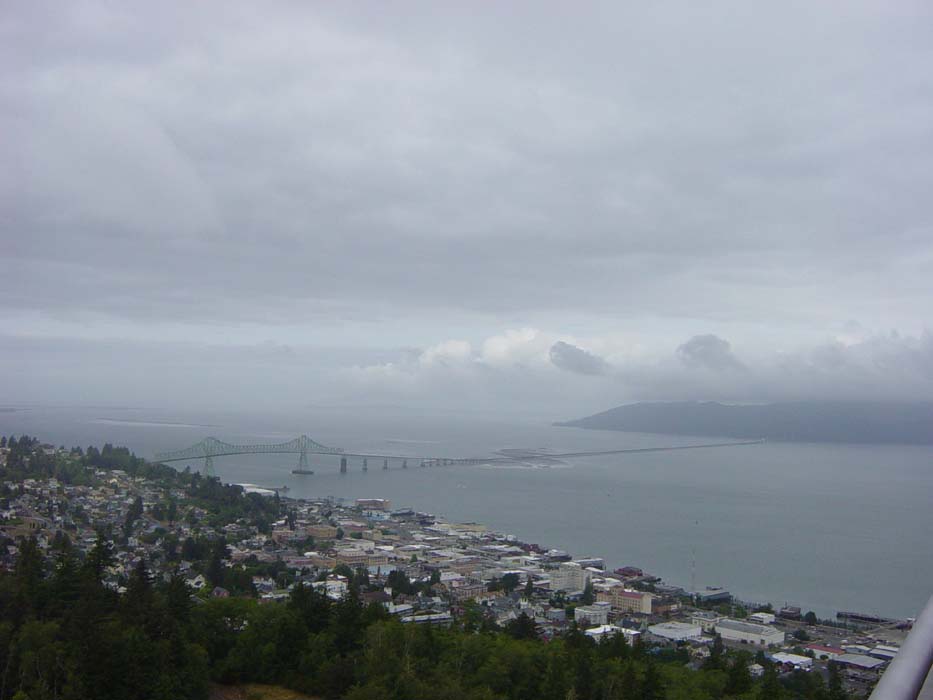 And further to the left, this is the direction I'll be bicycling tomorrow as I head down the Oregon coast. 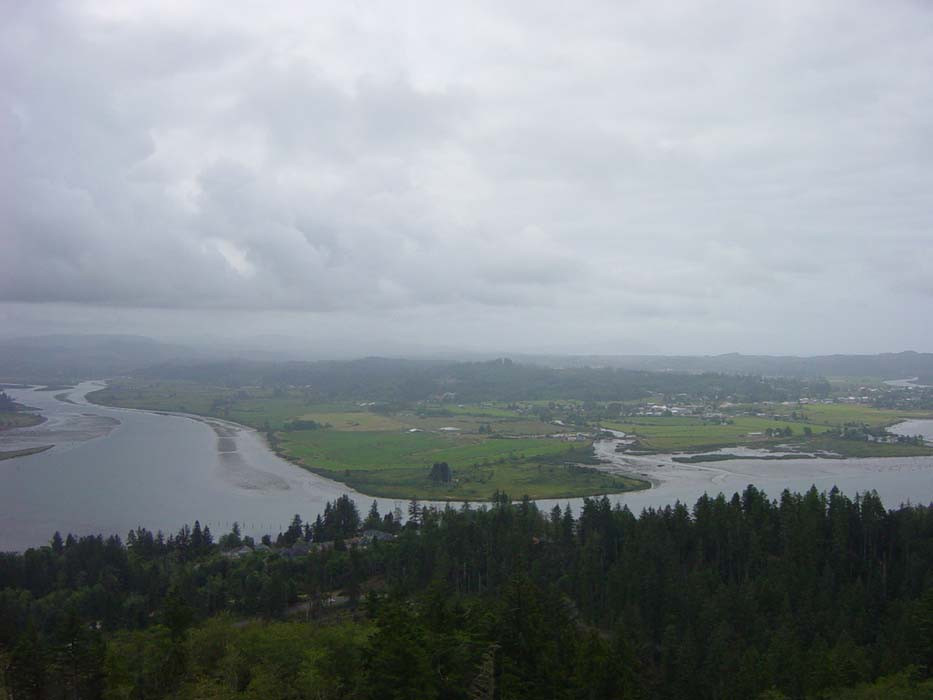 Random Wildlife Sighting! After checking out the rest of the park below, we headed back down towards town, and encountered this utterly fearless critter grazing by the side of the road. Yes, we really were that close to it. And yes, it was alive, it's not some kind of stuffed decoration. 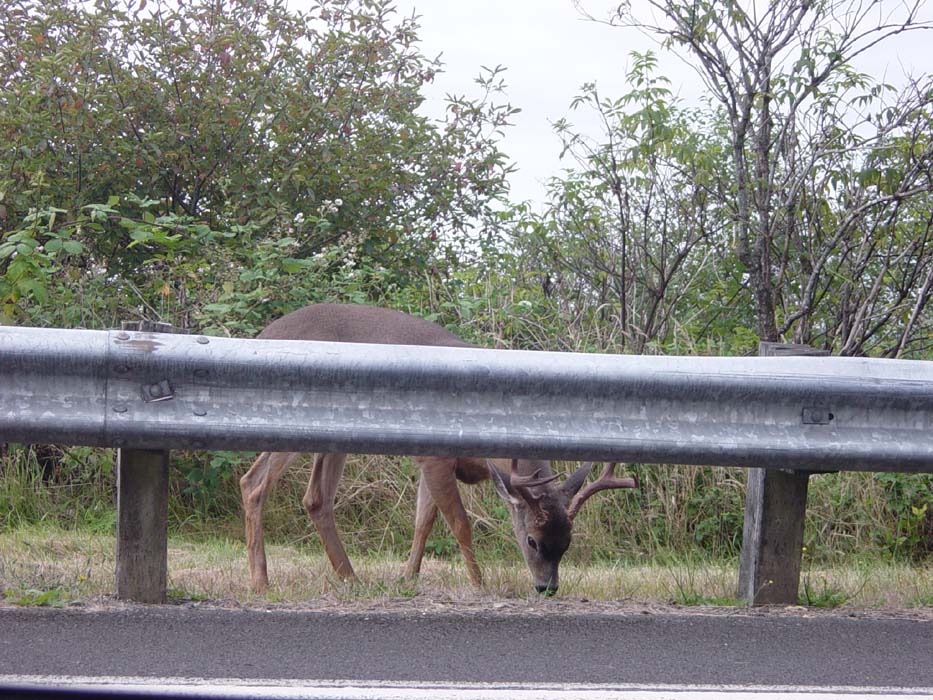 Moving on, we visited the Columbia Maritime Museum, which is actually quite large and took a couple of hours to completely experience. They had an introductory film discussing the difficulties and dangers of "the Bar," or entrance to the river, where the massive volume of water coming down from inland meets the sea, and churns up ever-shifting sandbars underwater. There were many exhibits discussing Coast Guard efforts to safeguard the area as well as famous rescues from Astoria history. This boat in particular (an actual boat, not just a prop) was one such craft on display. 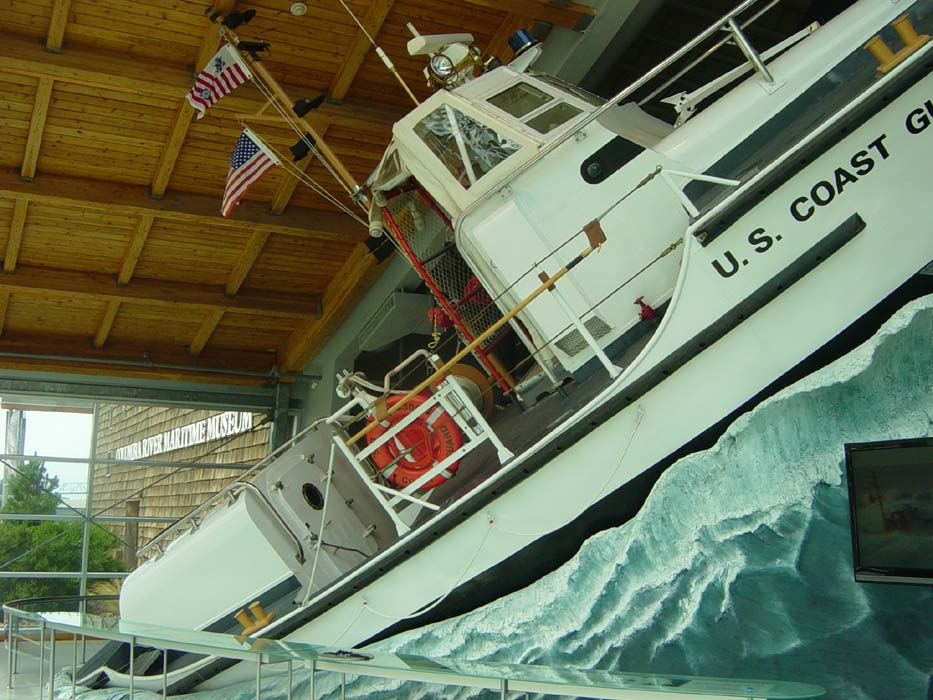 You would think piloting a big, stable ship into the river would be relatively easy (you can see such a ship in one of the overlook views above) but in bad weather and rough seas it's quite a problem. Every time a ship comes in, a river pilot has to be sent on board via a boat to boat transfer. He then pilots the ship through the narrow passageways where draft distances are measured in feet. They had a display with a view from inside one of these pilot houses looking out, which went something like this: 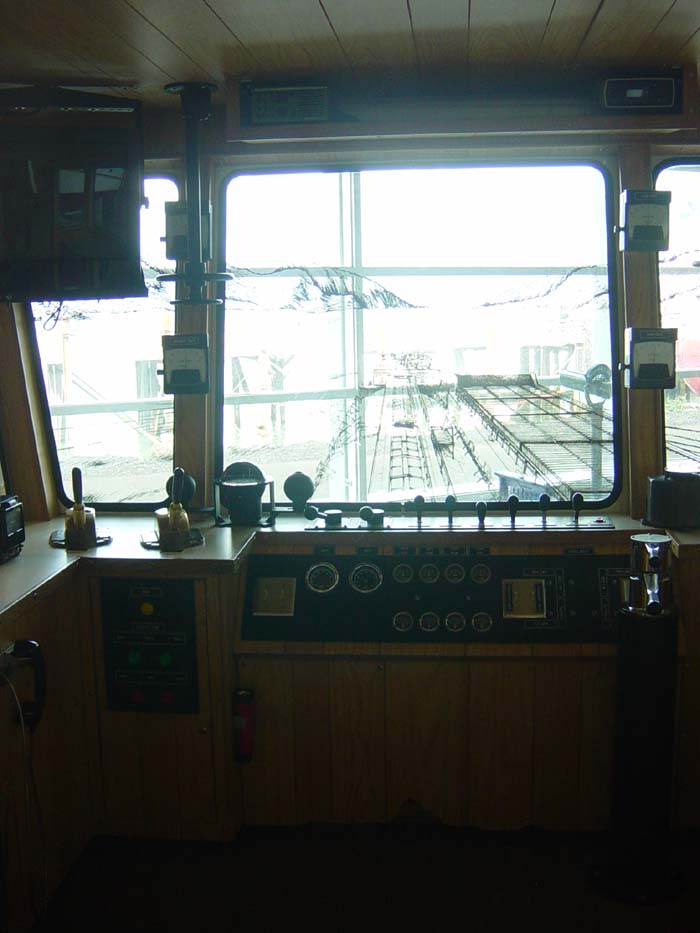 Another section of the museum discussed the growth and eventual decline of Astoria's salmon fishing industry. Salmon were so plentiful here at one time that immigrants came from all over the world looking for work as their old stomping grounds became overfished. They wound up sailing around in boats like this one, using gill nets (designed to float at various heights in the water) and other methods, and often squabbling with each other over fishing rights in specific areas. 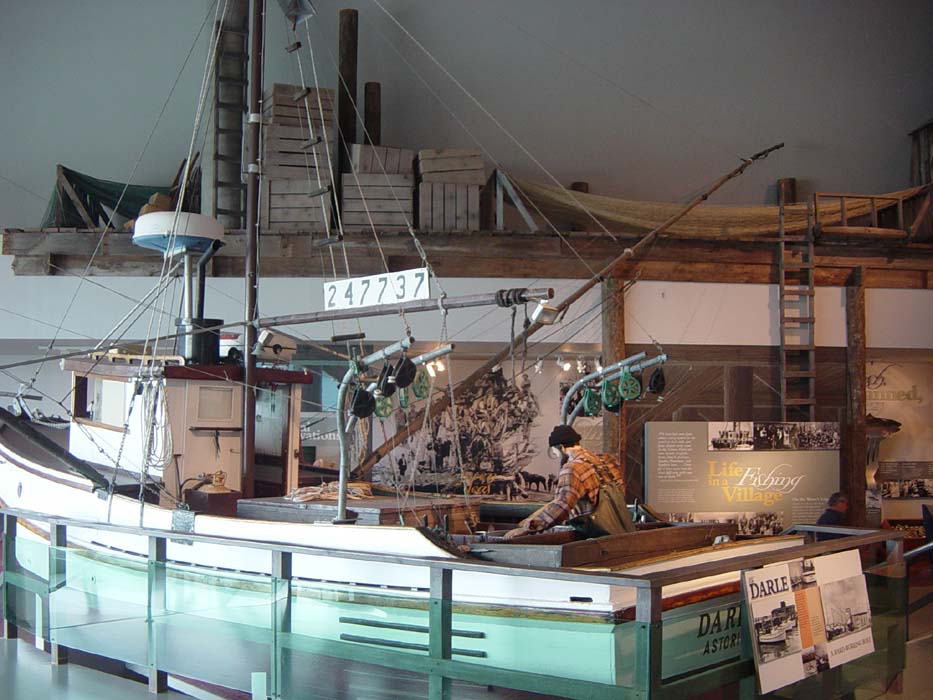 After spending a couple hours in the museum we were able to go out to the nearby dock and check out this actual Coast Guard ship (we couldn't go onboard, though). 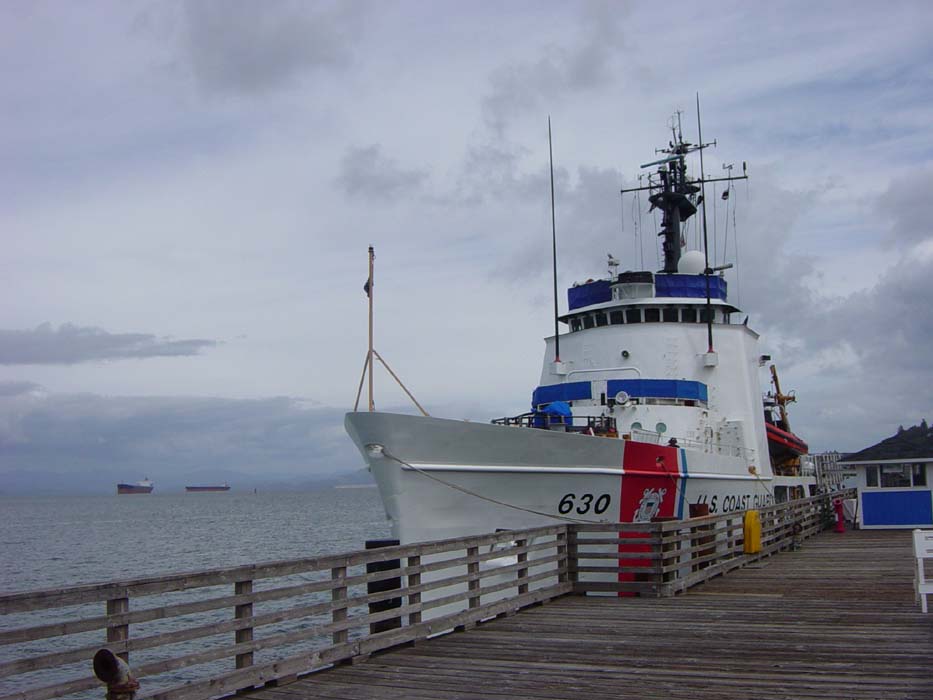 Then we were able to go into and check out this old "lightship," a vessel designed to float in a specific spot at sea (regardless of weather) acting as a floating lighthouse. The bright colors, multiple lights and foghorns made it easy for incoming ships to spot. Plus, it acted as a rescue point if ships needed to be towed away from the bar in rough seas. The ship had a crew of 17 (10 on duty at any given time) who worked for 2 weeks out of every 3. Another job to add to my list of ones I never want to have. Anyway, lightships have since been replaced by enormous automated warning bouys, which is why this one is basically now a floating museum. 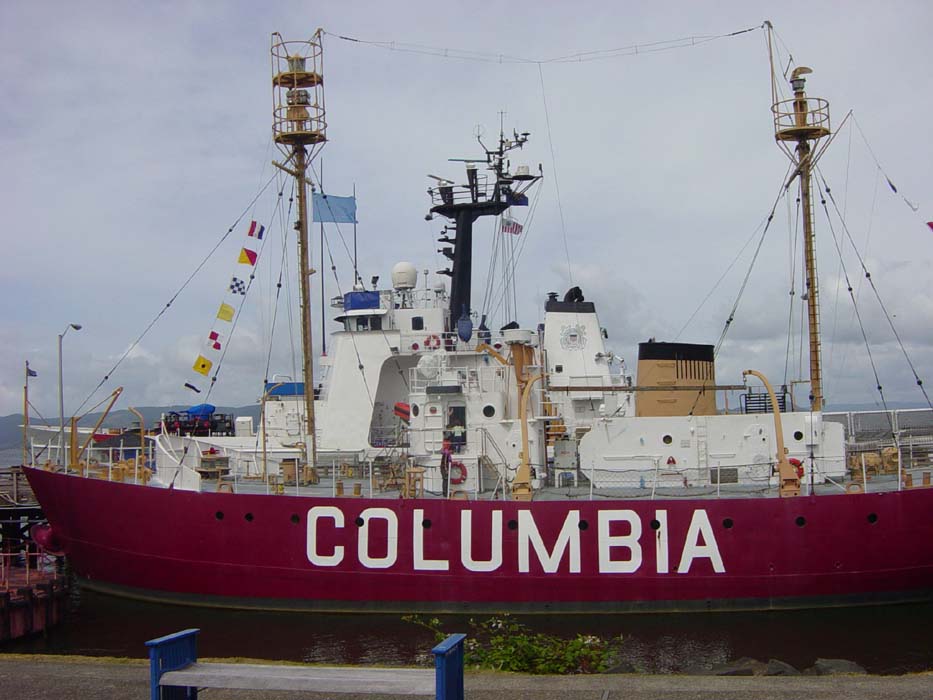 Finally, we concluded the day's touring by checking out the local firefighters' museum, which turned out to be not very much at all. There were some relics of old fire stations as well as some historical information regarding fires in Astoria's history, but that was about it. I took this one picture of a classic old engine, and that was that. 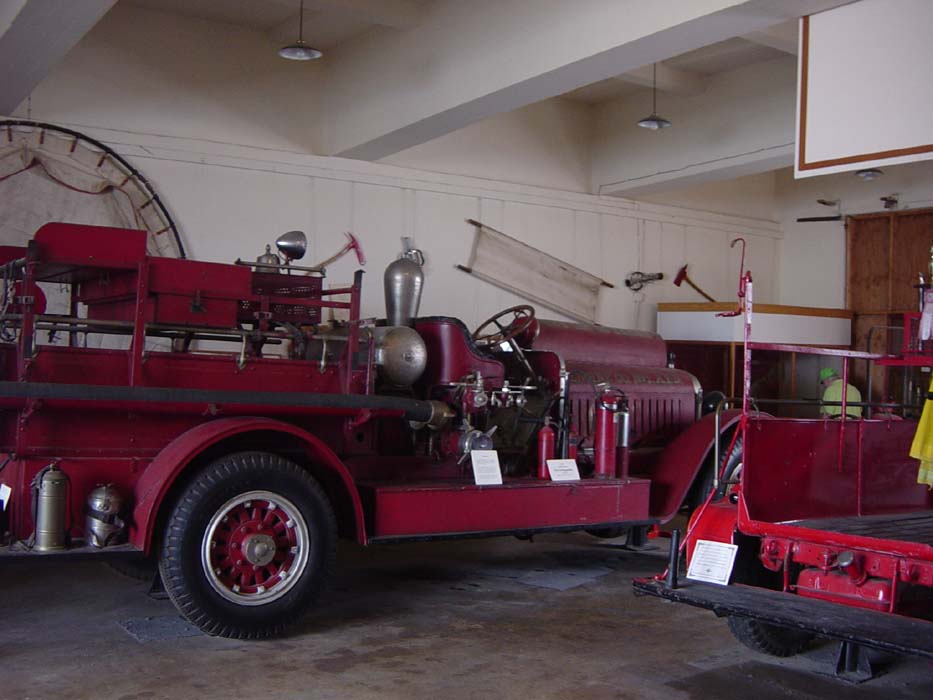 After grabbing lunch at a local restaurant, Tom headed off for home since he had a few things to do before work tomorrow. I went on a simple 10-mile loop around town to get credit for my daily ride (or "daily quest"), then headed back to the room to do laundry. One of the nice things about this hostel, other than the fact that it's cheap, is there's a coin-op laundry right on the premises. Since I haven't done the wash in over a week, this was quite welcome. The only real disadvantage to this place is you have to share a bathroom and shower with the other residents (sort of like a college dorm) but I can live with that. Since I expect to camp tomorrow night, having clean clothes is quite a blessing.

One more thing before I close today's report. You might recall that back on Day 8 I mentioned a couple I met touring on a tandem bike. Well, while doing my 10-mile loop I ran into them again. They had just crossed the Bridge of Doom, and we got to swap some more horror stories about that and other things along the way. They're heading to Portland now so I probably won't meet them again, but you never know. Their ultimate destination is San Diego, just like me. You never know where we might bump into each other again.