After yesterday's mind-numbing marathon ride, I intended to take it easy today, and the ferry ride at the start would be the perfect opener for that. The Cedar Island-Ocracoke Island ferry takes 2 hours and 20 minutes to cross and only leaves 6 or 7 times a day. If you're in a car, you need to make a reservation, although apparently they'll take any vehicle, because I saw a monster RV get on the boat without any trouble. Pedestrians and bicycles don't need reservations, though. I skipped out on the early 7am departure because I knew I'd never be awake in time for that, and instead went with the 10am one, figuring I'd just have a short day and not worry about it. In fact, knowing I wouldn't actually get on the bike for a while, I decided to eat a light breakfast (my first meal other than dinner in about 2 weeks). Okay, so it was only cereal, but still...at least I ate something. After that, I packed up and got ready to get on the boat, which looked like this: 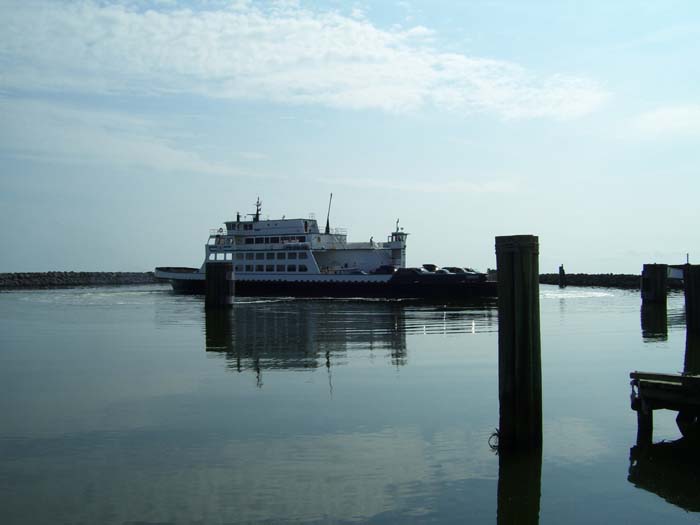 Once on board I took a couple more pictures including this one of the nearby beach. Needless to say, Cedar Island is not very populated. 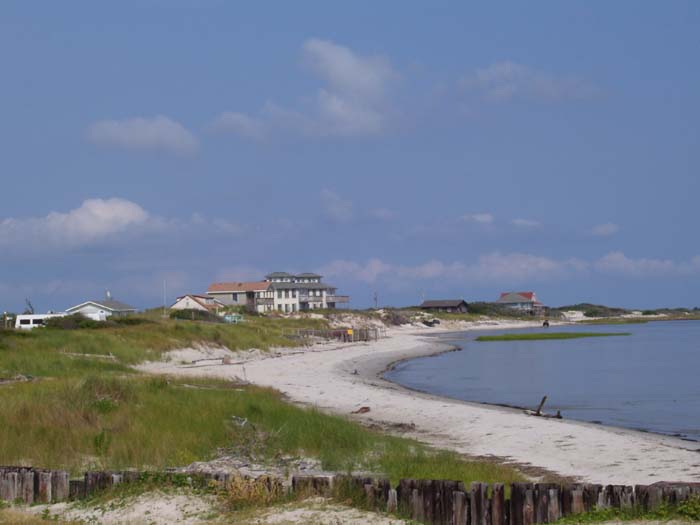 The ferry landing as we departed...notice my bicycle down there among some bikes of a completely different sort. 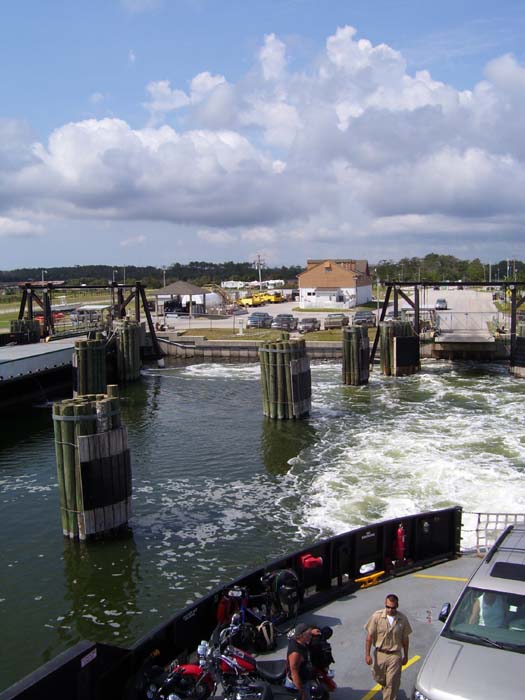 Heading out we passed one of those guidance markers atop which sat a large nest containing an osprey. Click this picture to zoom in for a closer look. 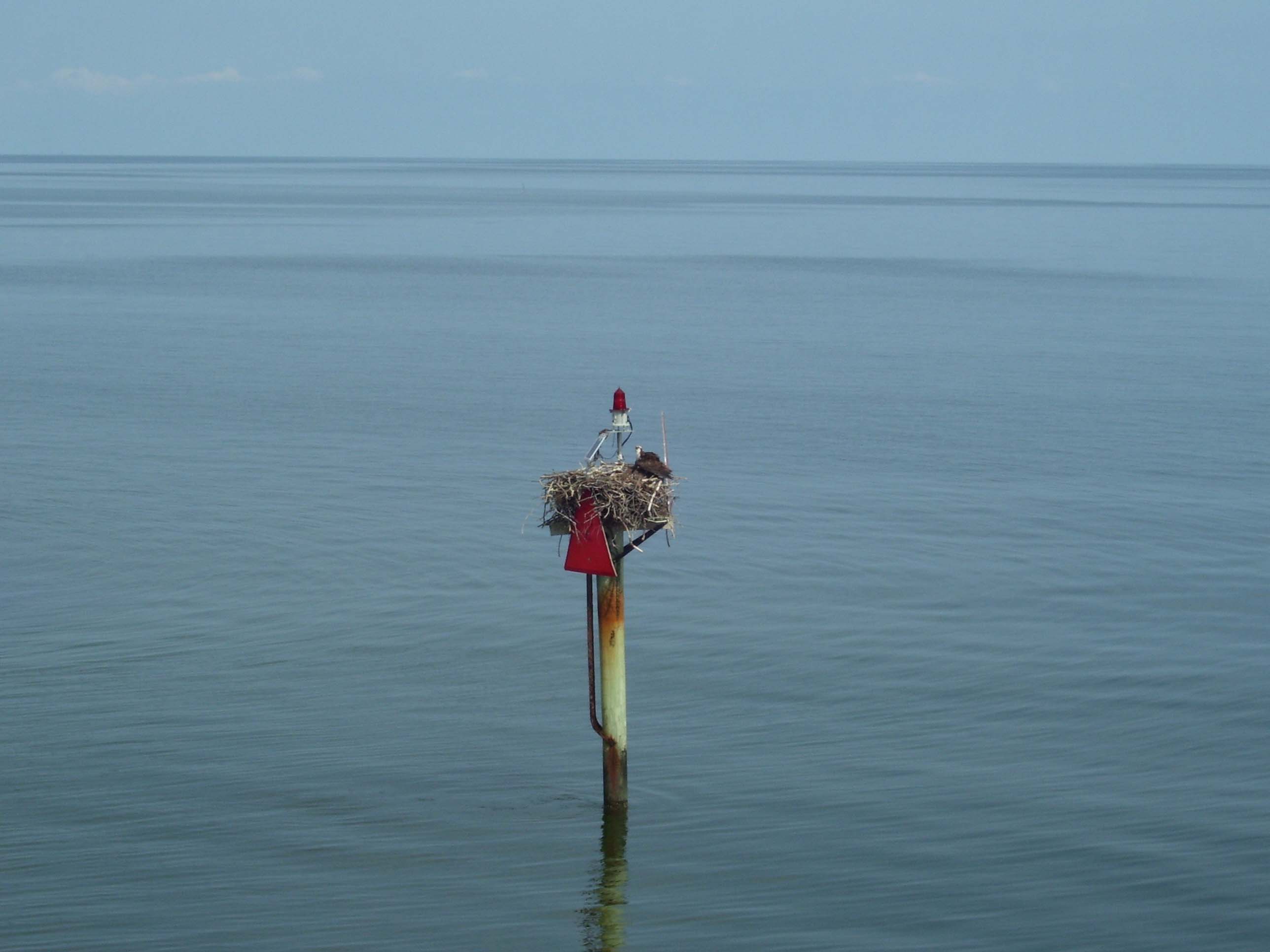 During the 2 hours plus boat ride, I had a mission to complete. As I mentioned yesterday, the tread's started to wear off my rear tire (see photo). Underneath is a thick kevlar-armored lining, which can stand up to a couple hundred more miles of riding as long as it's not abused too badly. Since my front wheel has an identical kind of tire on it, and both were bought at the same time, you'd expect them to have about the same amount of wear...but nope. The front one still looks almost new by comparison, because there's not nearly as much weight on it. Which means, if I swap the tires, the front (worn out) one can still last quite a while. So that's what I did...I took the tires off both wheels and swapped them. This took about 45 minutes. Here's the front wheel now, showing how much damage we're talking about. 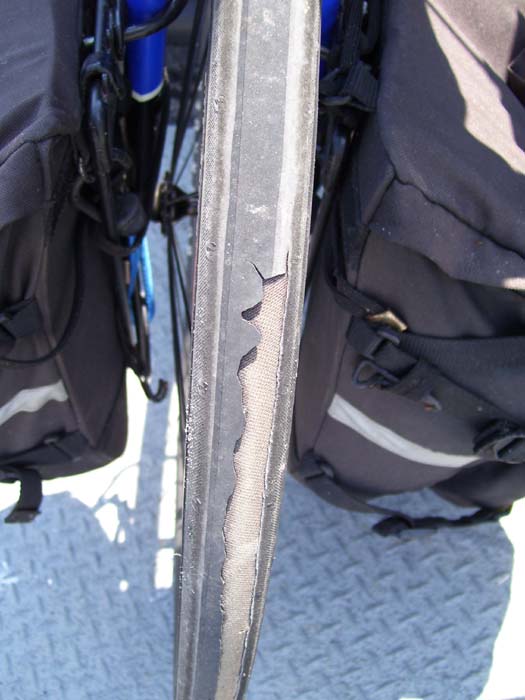 See that little hook thing next to the left-hand pannier? I wish I'd seen that when I took this picture, because it's come loose from the rack and later on in the day, it managed to get caught up in the spokes and wrap around the front hub, causing my ride to come to an abrupt halt. Fortunately nothing got damaged except the hook, which got totally destroyed. I didn't really need it, though, because the blue bungee cords are holding steady, but still, the whole incident caught me by surprise.

But that's later, after another adventure entirely. First off, though, I had to get to Capt Hatteras, which looks like this as you start to get closer on the ferry: 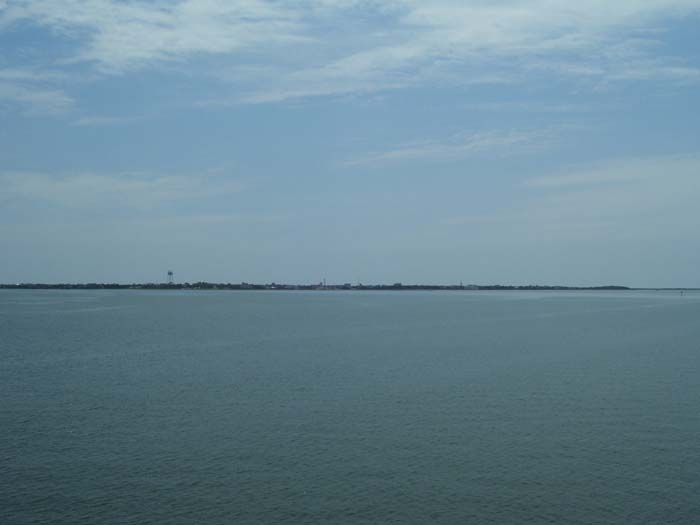 A bit closer, you can see the harbor the boat needs to get into. Instead of sailing directly in, though, it cruised off to the right and then swung inside, following those little route markers on the posts. I guess the water's deeper there, or something. 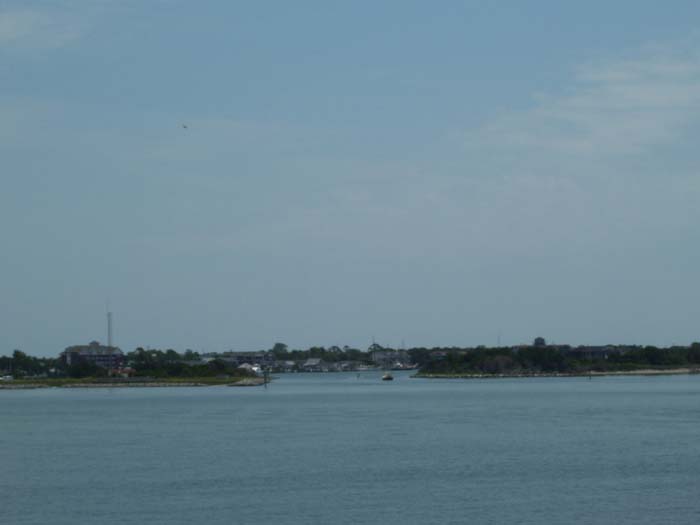 We wound up looping around this last red marker on our way in the harbor. Look at that, another bird, too. They really like those posts. 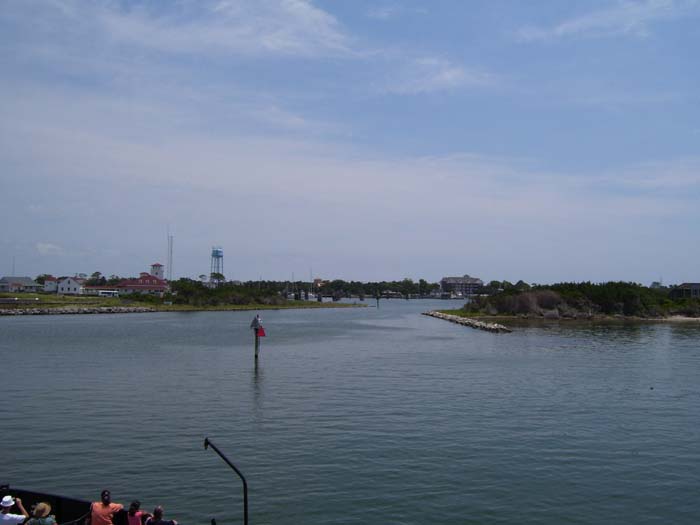 One final look at the touristy little town of Ocracoke, filled to the brim with shops and things to do, none of which interested me in the slightest. It's time to get on the road!

And so, after a couple miles of tourist central, I reached the actual road across Ocracoke Island, which looks like this for almost its entire length. Unfortunately, the wind was in my face, coming from the east as I ride almost directly east. Too bad, or I might've enjoyed this more.

I also would've enjoyed it more if I hadn't broken another spoke about halfway to the other side. As you'll recall from earlier on in this tour, I'd snapped a spoke connector off at the base (because my bike is overloaded) and the bicycle shop owner told me more of them would probably break because they're aluminum, not brass like they should be for a wheel supporting this much weight. Well, he was right, because here's the snapped-off spoke connector next to the fresh new one I put on. I should also mention I had to remove the tire and tube to get to this...which I already did once today (twice, actually, for both wheels) and once yesterday to fix that puncture...so that's 4 times in 2 days I've had to remove a tire from a wheel. That's some kind of record for me, I'm sure. 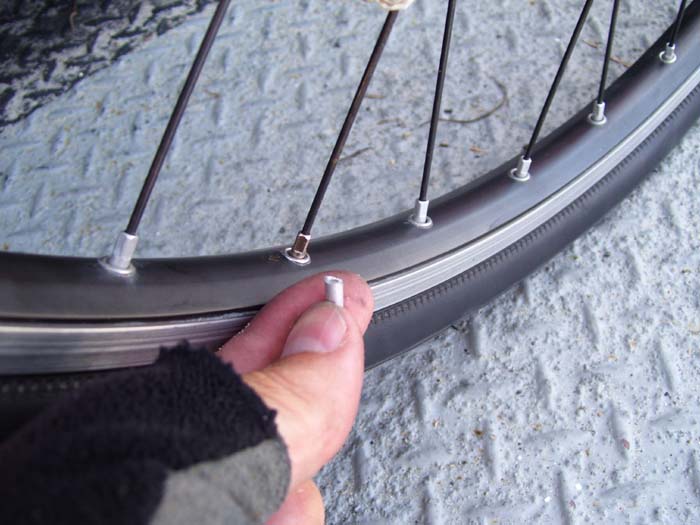 Anyway, at the end of Ocracoke, there was another ferry (I didn't bother with any photos this time as they basically looked the same as the last two ferry rides you've seen) and of course I arrived just a couple minutes late, just in time to watch the boat sailing away. It's all right, though, as I needed the break to catch my breath. I wound up fixing the spoke (above) while on the boat, actually, having just barely enough time to do it before we reached the other side. Which, by the way, looked like this: 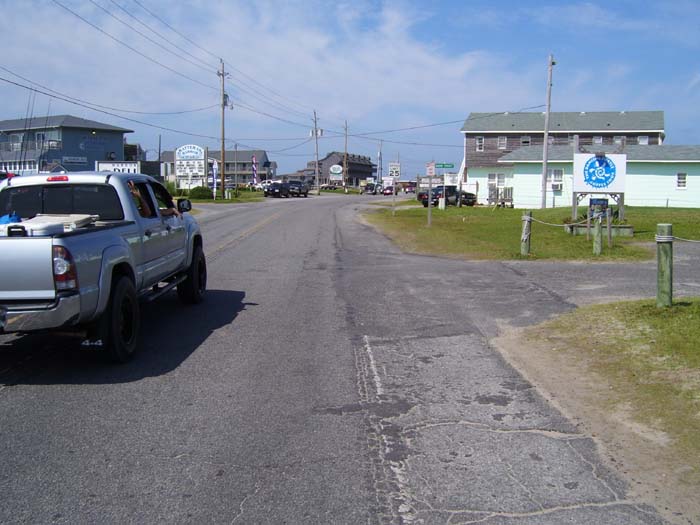 After leaving this beach town it was off to ride among the grass-covered dunes for a few hours... 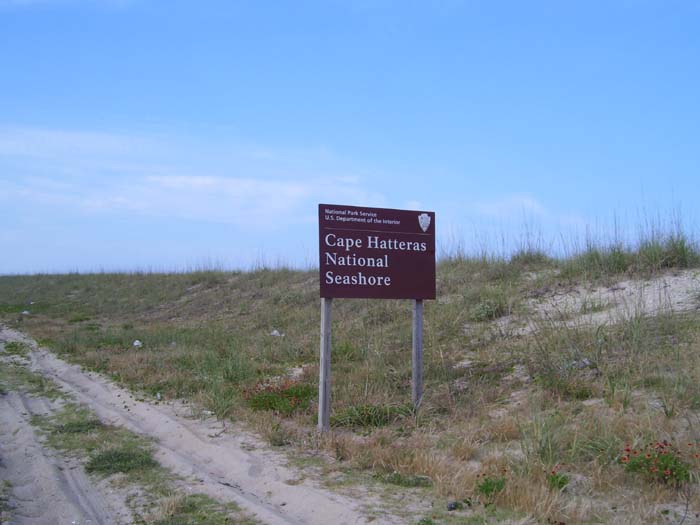 The road eventually banked northeast, so the wind got a little less troublesome, but still I felt like I was really struggling. My legs hurt (obviously a holdover from yesterday) so I told myself I'd take the first hotel I could find after leaving the town of Avon. After about 12 miles of riding from that point, the distant buildings started to appear on the horizon... 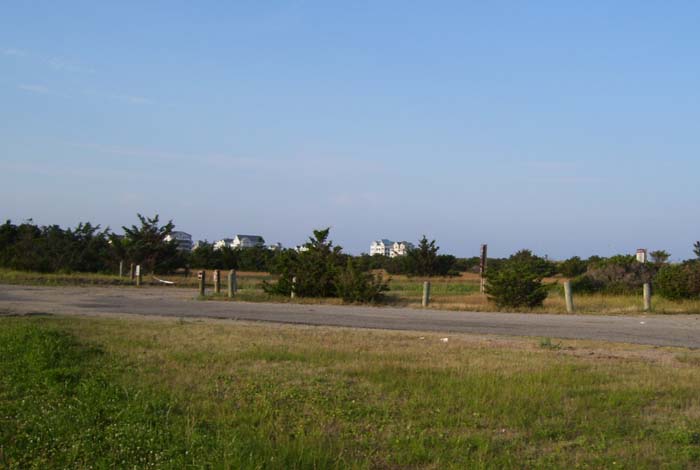 And sure enough, they had a hotel. Doesn't look like much, does it? Well, once again, it turned out to be pretty nice inside. For $65 plus tax, I got a full size fridge, a sink and dishes, and a microwave, and everything else a normal room has...basically a little efficiency room that sure feels a lot better than a mosquito-filled campsite someplace. 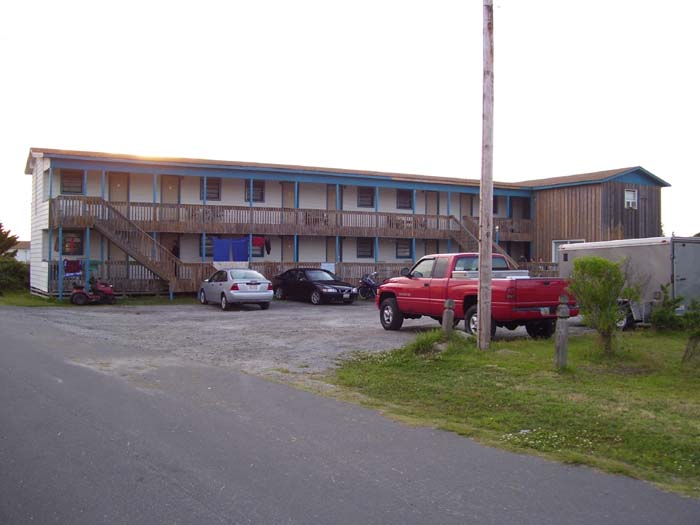 Even though it's Sunday night and I'm in this tiny little town, they still had a place that delivered Italian (I got baked spaghetti). I really didn't expect that. Guess I don't need these two slices of 2-day-old pizza after all...good thing, too, as it's looking pretty gross.