I'd intended to make this day a short one, but hotel positioning didn't work out quite like I wanted it to. I could've stopped 20 miles earlier, but that would make the ride to DC 20 miles longer...I really want to be in Washington by Friday night. Plus, tomorrow (the 29th) the high temperature is supposed to be 105, so I'd rather the shorter day be the hotter one. Plus, as an added bonus, if I could get to Fredericksburg, I could stay in a Motel 6 and do laundry for the first time in over a week...desperately needed laundry, I can tell you. So when I left this morning, that's what I had in mind.

The winds were supposed to be favorable today, and for the most part, they were. The high temperature in the mid-90s didn't even really bother me all that much, either, primarily because it wasn't very humid (well, comparatively, anyway). The real obstacle were those endless rolling hills...I'd top one, only to see what always looked like a worse one coming up next. They always look worse when you're sweating it out topping their predecessor, don't they? But honestly, I'd just remind myself that for once I didn't have to fight headwinds, or deal with crushing humidity...and that, plus the comfortable descent after each climb, helped me get through the day. I also constantly found myself comparing today to some of what I experienced back on the west coast, and these hills today weren't nearly that bad. They were worse than yesterday, though, that's for sure.

Also worse than yesterday were the roads going into Richmond, which were positively awful. At one point, the entire right lane was so badly torn up I couldn't ride on it, which I'm sure made the drivers annoyed as I essentially cruised down the middle of the street. I saw potholes that would've eaten my wheels, and once, the asphalt had buckled so badly it stood higher than the curb...woe to anyone whose tire hits something like that when they aren't looking. Fortunately, I didn't have to deal with this for long, because eventually I got into downtown and things got better. Here's a look at Richmond, by the way... 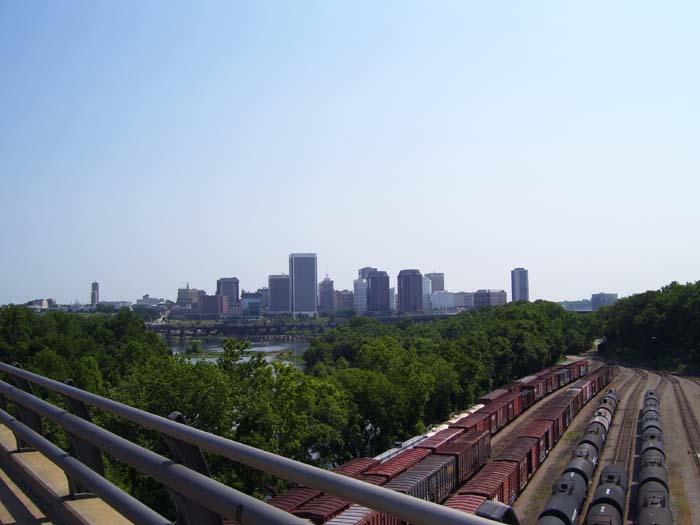 Not a bad looking city. A bit further along I came to a Virginia war memorial and took my first break there, enjoying a brief tour of the museum with its displays honoring the soldiers who fought in all America's wars (even obscure ones like the Spanish-American War or the war with Mexico). They had displays showing the various uniforms and weapons, plus what daily life was like for the men involved in each conflict. There was heavy emphasis on Virginia's contribution, which is to be expected. 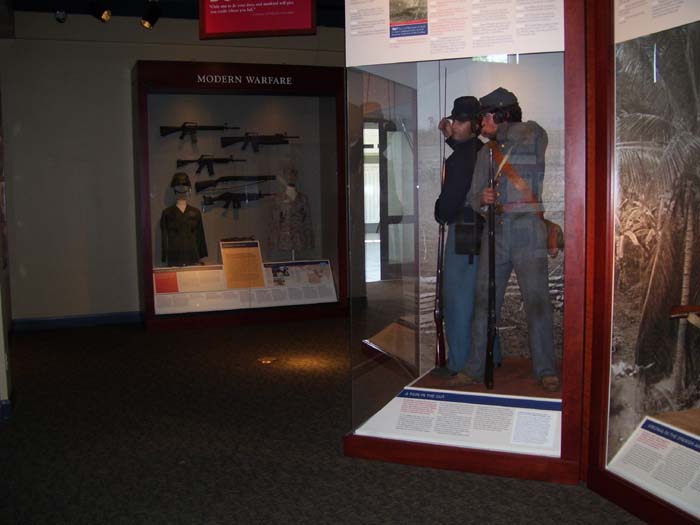 A look out the other side of the museum, showing more of Richmond and the little ampitheater near the memorial. 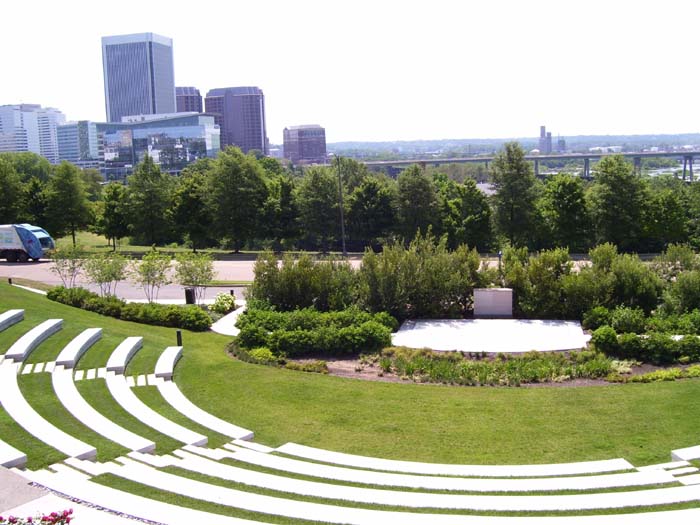 The memorial itself had the names of all the soldiers from Virginia who fought in each of the various wars and conflicts. Here's a sample. 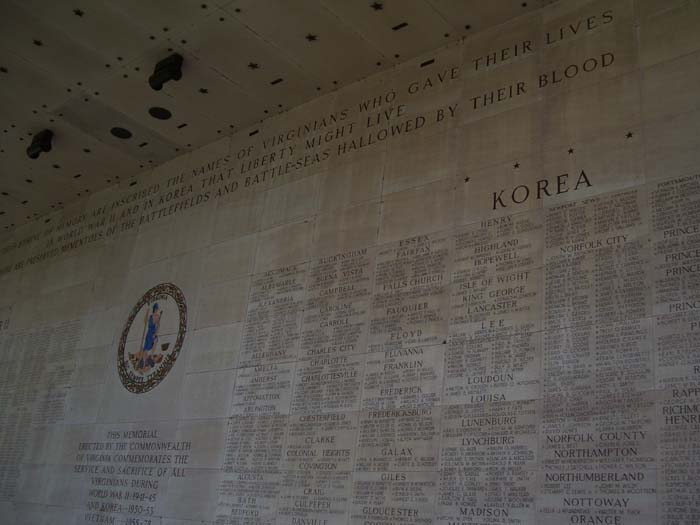 Another angle showing the interior, the iconic statue representing Freedom, and the flame kept burning to honor those who gave their lives fighting for said freedom. Too bad you can't see the flame because those two guys stood there the whole time, blocking my shot, but it's there. (I waited for them to move, but they didn't, and finally some more visitors arrived so I gave up and left.) 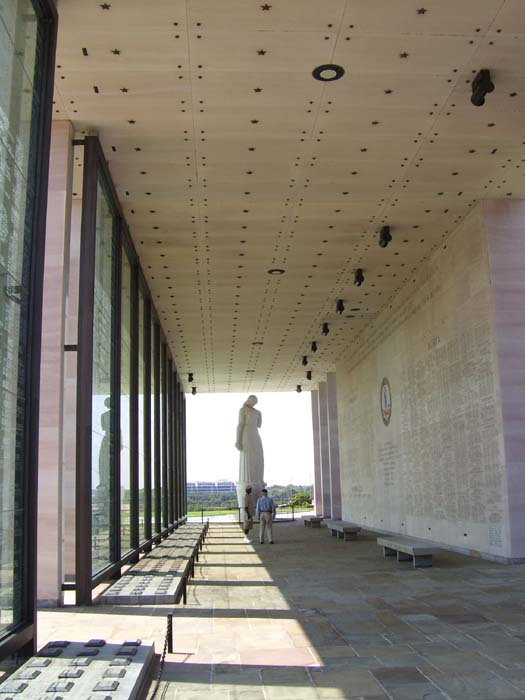 Back on the road, I headed out the north side of Richmond and into the open country. At first the hills weren't too bad, looking sort of like this (looking uphill already with another climb coming)...the road's in good shape, but not much shoulder. This is the widest shoulder I saw all day, actually. 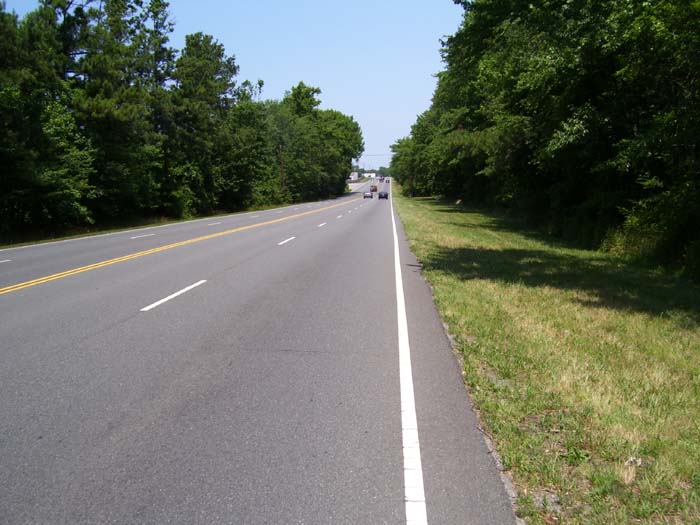 About 10 miles later it had degenerated into this...same shoulder, but much worse roads, and the hills are steeper (see how it sort of bends up at the end, and after that, which you can tell because of the lack of visible trees at the horizon, it dives back down again, only to start another climb right after. The worst ones were at rivers, which I grew to dread seeing as they approached on my GPS. But I got through them all right, I suppose, even going over 20 miles at one point without a break (because I didn't find anyplace good to stop). I didn't get an exact count, but it was at least 22 miles, exceeding my previous record this tour by several miles. 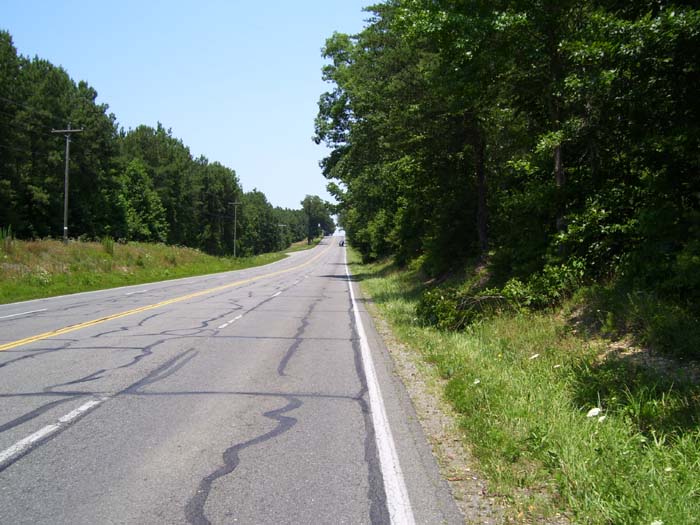 One thing I like about riding on US-1 is all the historical markers, especially around this area, where a lot of Civil War battles and skirmishes were fought. I haven't taken pictures of any of these because there's so many, and a lot are just things like "Grant passed within 3 miles of here," or "There was a courthouse 2 miles west where Lee spent the night," and that sort of stuff. Here's an example of one of the better ones (the "North Anna" refers to one of those rivers I mentioned earlier). 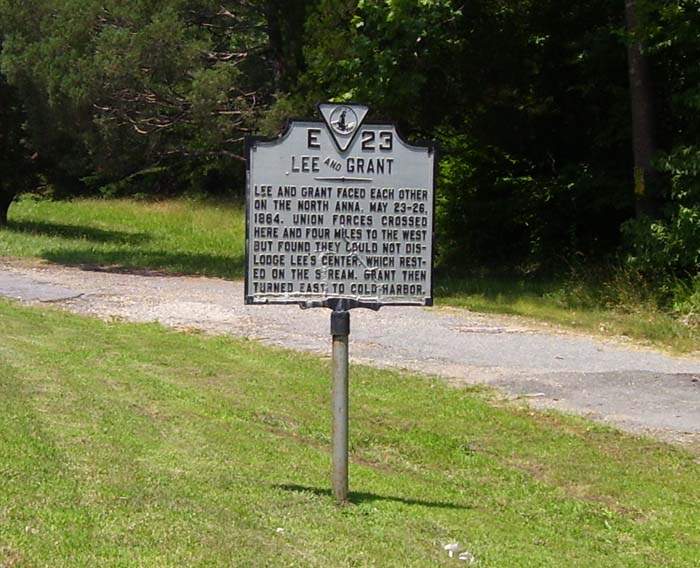 The heat didn't bother me all that much for most of the day, but in the last 15-20 miles or so, it started getting noticeable. This suggests if I want to avoid it, I should get up earlier in the day, so I'll try that tomorrow. I only expect to ride about 50 miles tomorrow, if that, and the next few days will be similar as record high temperatures hit the area.

(update) One last thing...when I got up today and started packing up, I noticed a few things missing from the laundry I did last night...two cycling shirts, 3 socks and one pair of bike shorts. In something of a panic I hurried back to the laundry room and found said items piled in with a bunch of other "unclaimed" clothes, and still wet, too. I'm absolutely sure beyond a shadow of a doubt that I took them out of the washer and put them in the dryer...I know this because I couldn't find one of the gloves (I always check for both gloves as I swap loads) and searched the entire interior of the washing machine in case they were stuck to a wall somewhere. (Actually, the glove was stuck to one of my other clothes.) Asking around at the Motel 6, I learned several other people had complained about similar things...apparently some people think it's fun to go into the laundry room and switch them around. That explains the two white undershirts that weren't mine in my laundry bag, I guess. Fortunately for me, the person who got the wrong stuff didn't keep it, but left it in the room for me to find. It's still wet, but I'm just glad to have them. Another example of the perils of living on the road, I guess.