As you can tell from the weather line (above), the wind refused to decide on a direction today, coming from seemingly every which way. When I got started it was in my face from the northeast, but it gradually meandered around to the northwest, but every time I got close to the coast it came in off the ocean from the southeast. For the last third of the ride, maybe, it sort of stabilized from the southwest, which made the last couple dozen miles easier, but I wish it would've been that way all day like the weather forecast said.

Even so, the weather was still pretty nice. Mostly clear and sunny, with comfortable temperatures (it did get into the low 80s early in the afternoon, but after weeks at 90+ that didn't feel the slightest bit hot). The hills were still there, too, but nothing really nasty or steep. I got plenty of exercise, don't get me wrong, but I never had to put my head down and slowly crawl up over any mile-long climbs or anything like that. In other words, pretty reasonable. Here's a sample from early in the day, with the clear sky and a very easy hill on the horizon. Plus I got nice wide shoulder most of the day, too, except in the towns, where the road narrowed and people had to go around me. 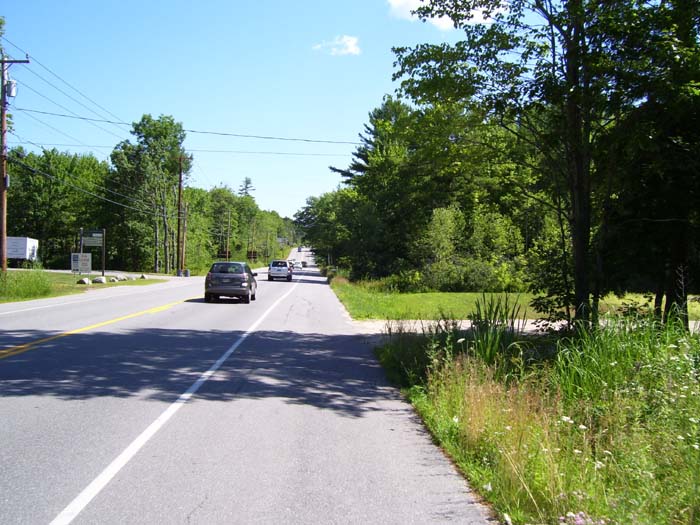 See what I mean? And that temperature there, that's just perfect...it can stay that way the rest of the week, as far as I'm concerned. 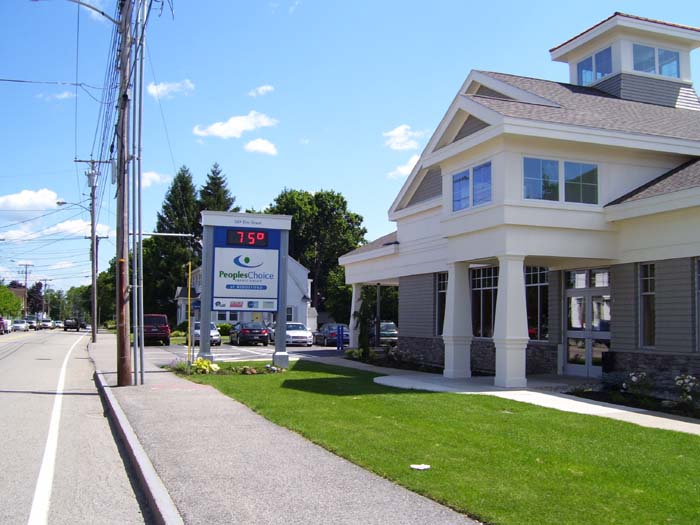 Here's a better look at one of those small towns (I rode through several). Just what you expect when you think of Maine, although perhaps it's missing the lighthouse. 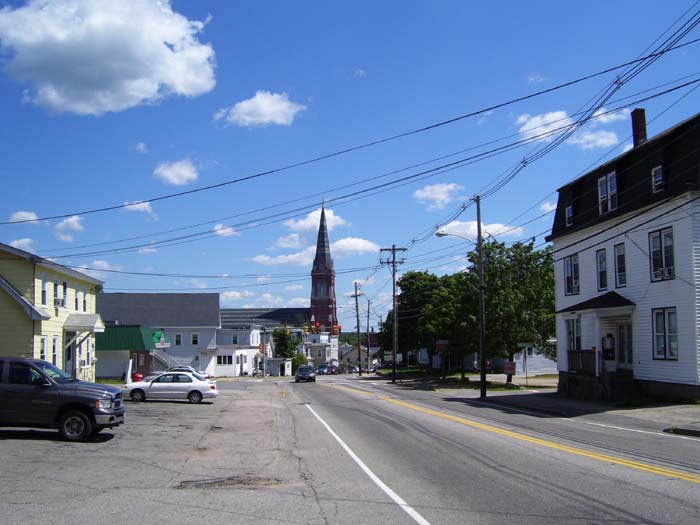 The day was so nice, I barely noticed the first 20 miles or so going by. Then I came to a sign pointing towards Old Orchard Beach, a short distance off my planned route. As some of you might recall, Old Orchard Beach is where I finished off my cross-country bike tour back in 2001, eleven years ago (you can check that out for yourself by clicking here). As an interesting side node, that tour was 35 days long, and today is day 35 of this ride...I guess that's another one of those weird coincidences that defy all explanation, because I certainly didn't plan it that way, that's for sure.

Anyway, I never thought I'd pass that way again, so I decided to go back and revisit the site, only this time without all the "omigod I just crossed the country" emotions running through my head. Seeing sights like this brought back memories, though. This is the very last stretch of road I saw as I finished going from coast to coast all those years ago. 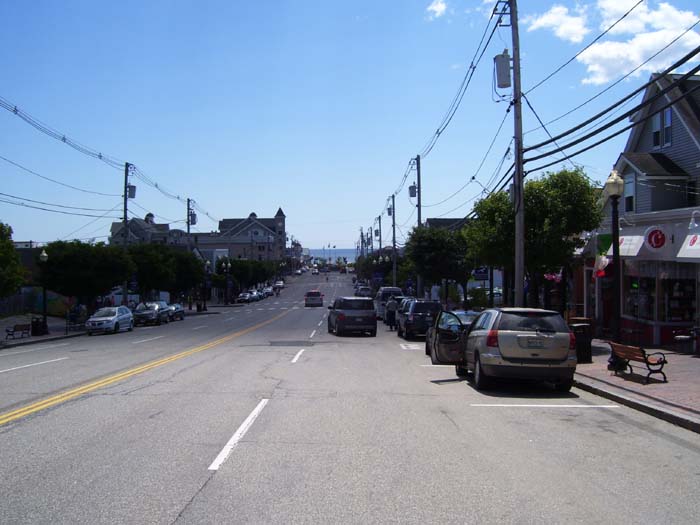 And here's the exact spot where my bike's wheels hit the beach back in 2001. Here, my new bike pays homage to the old by resting nearby (the tide's out this time, obviously). I've included the older photo for reference. (Actually, one part of the old bike did make it on both rides...those front panniers, and the rack they're attached to, are the same. Oh, and I suppose so is the lock, and the front bottle cage, which is the only one I've ever found large enough to hold one of the big 32-ounce Gatorade bottles.)

The pier itself is completely framed by businesses, like pizza joints and T-shirt shops, plus a bar down at the end. They wouldn't even let me walk my bike up there, so I just snapped this picture from the nearby beach and moved on. 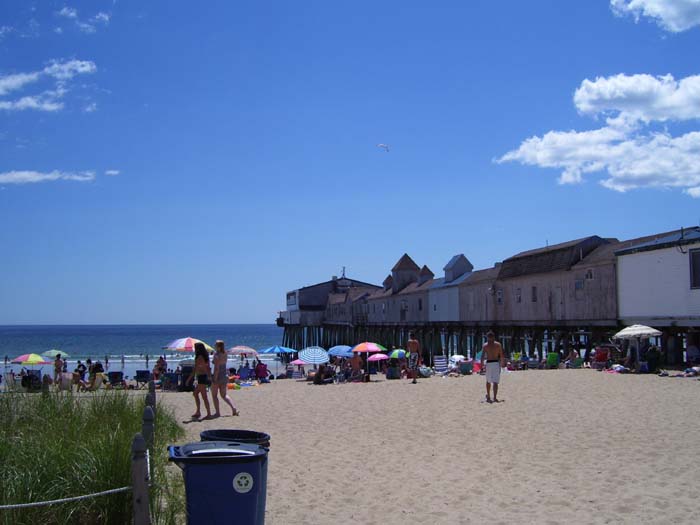 Old Orchard Beach from a bit further down the road. 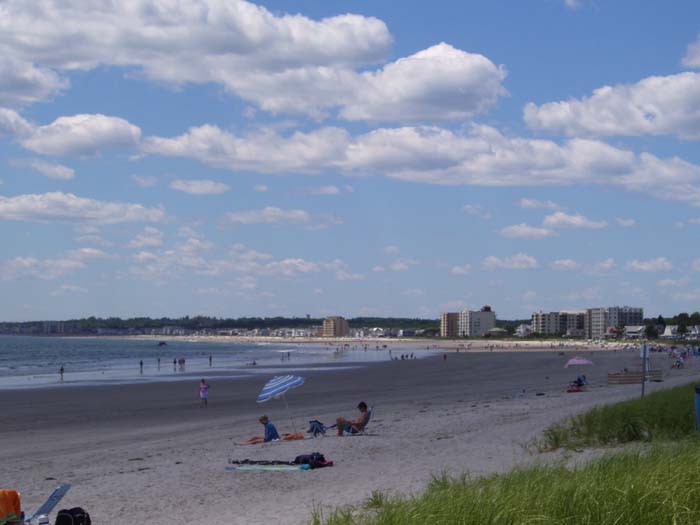 And the view directly to the left from that same spot. 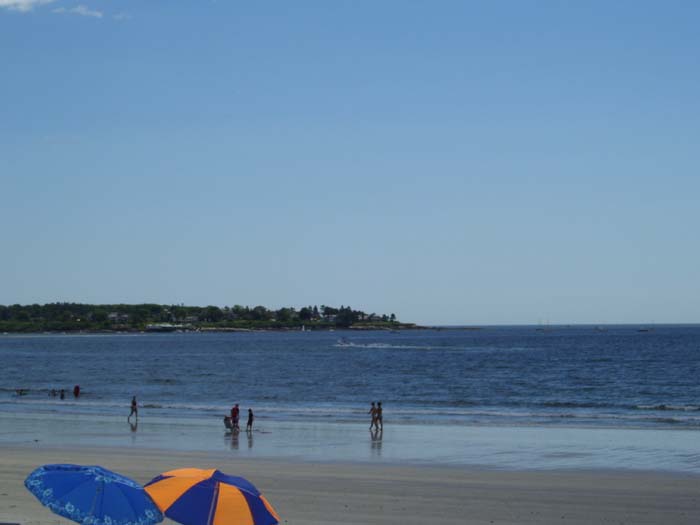 I never made it any farther down the beach after finishing the cross-country ride, so all of that was new to me. After spending a few minutes chatting with a local (who actually lives in Boston, but came up here by train for a day at the beach...and says you can bring your bike, which sounds like a great idea for any of you East Coast readers out there thinking about a day trip), it was back to the road, finishing off my nice trip down memory lane.

A bit later I came to Portland, where I had a bit of fun figuring out how to get across a couple of bridge. The first didn't prove to be that hard...here's the view. I couldn't really stop here, though, because I wasn't on a pedestrian path, but the actual street itself. Plus the bridge felt like it was uphill all the way. I took this shot while riding and kept right on going. 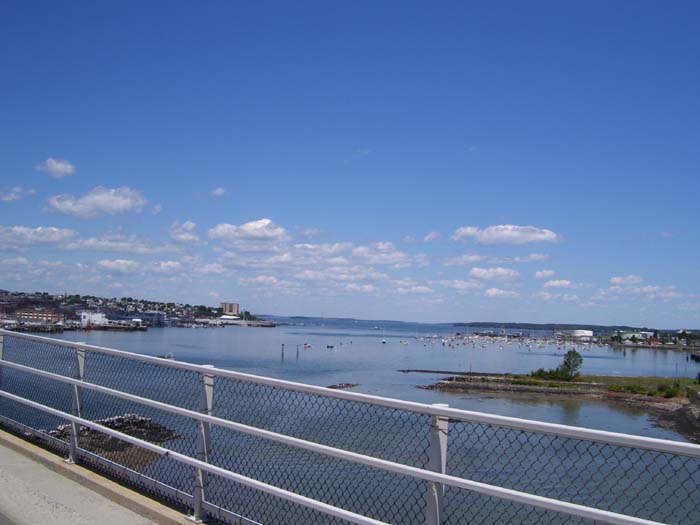 The second bridge gave me more trouble, because THE SIGN ordered me off the road well before I got to it and I wound up in this little park up on a hill. From there, I tookt his picture looking back at the city, while checking the GPS trying to figure out how to get to the bridge without too much backtracking. It turns out I could go along the river slightly east, down to the bottom of the hill, and get on a bike path that ran back under the bridge and looped up to the pedestrian accessway. So that's what I did. 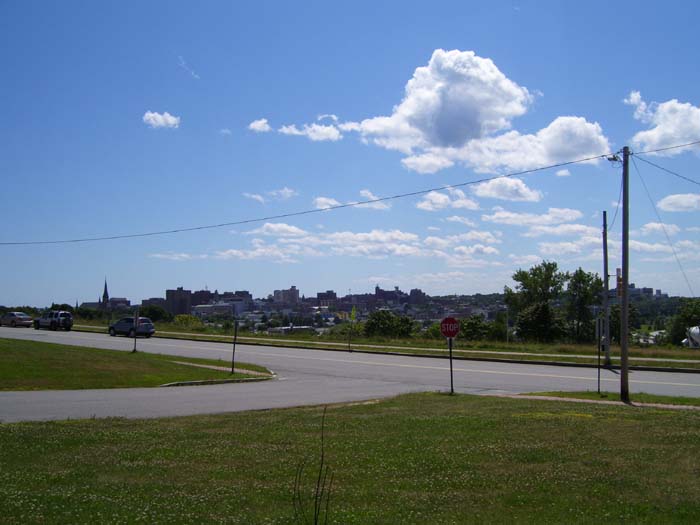 And about fifteen minutes later I was out of Portland (probably the last city of any size I'll see on the tour) and headed out ino pleasant country roads like this one here. 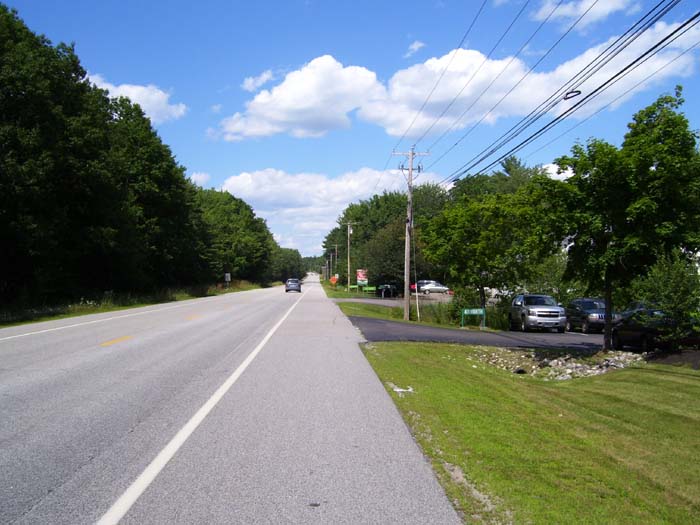 The road stayed nice and flat for a while until I got closer to Freeport, when I had to spend a couple miles climbing, but nothing all that steep. Freeport, as I found out, is full of factory outlet stores from places like the Gap, the North Face, LL Bean, and so on. The crowded string of shops looked something like this, with LL Bean just out of frame to the right (it was behind trees anyway so not much to see there). 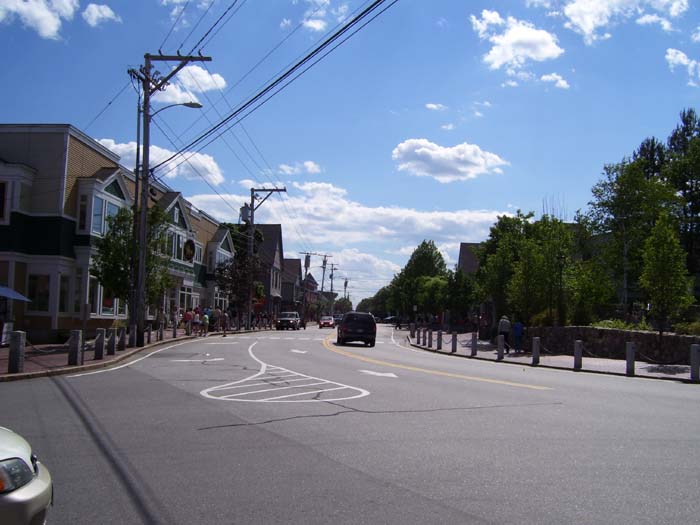 Yet another of these amazing New England churches (St Peter's, this time): 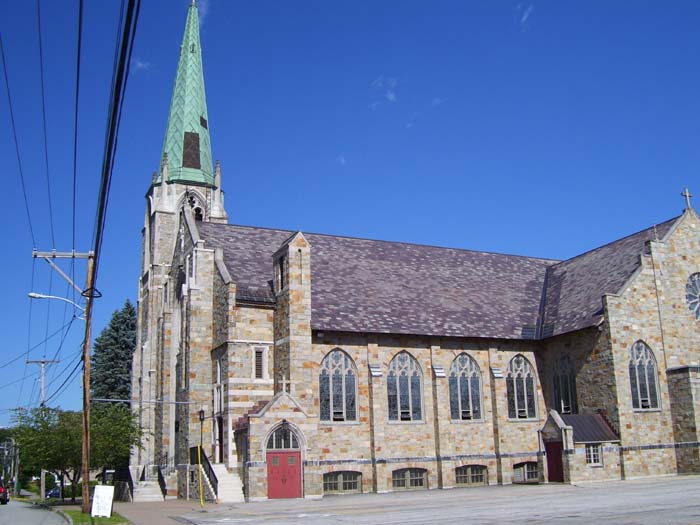 Upon reaching Brunswick I had several hotel choices, and this time, I intended to actually use some of those coupons from the Hotel Coupons book I showed you photos of earlier. Up until now I haven't been able to really make use of them, but today I had four options. The first two, on the west side of Brunswick, I just went past because I felt pretty good and it was still early. The other two were all the way on the other side of town, almost in Bath. The choicest was a Days Inn coupon for $45/night, an amazing deal in this part of the country. The only risk was that they might be full (I doubted it, based on their online listings this morning)  or might not honor the coupon because of some special event I didn't know about. But no, the receptionist didn't even blink, and I actually got a hotel in Maine for less than $50. Yay, coupons!

Anyway, just one last photo for today. This is a little seafood take-out place close to my hotel. These things are all over the place here in Maine...I've passed dozens of them. I didn't eat here (going with pasta again, because tomorrow will be a long ride and I need carbs) but if you're visiting, be sure to check them out. The last thing I need before a big ride is fried seafood, but I'm sure once the tour's over I'll be sampling some of this. 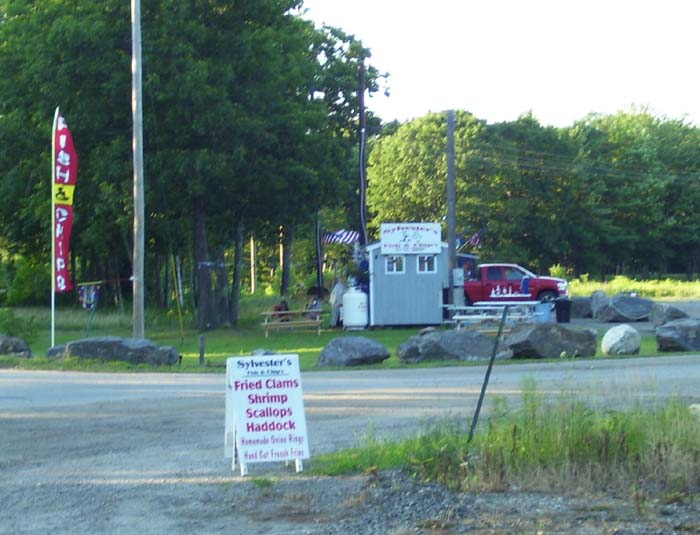 Speaking of tomorrow's ride, the target city's hotels were all full, as near as I can tell, so I had to reserve a fairly expensive one ($80) about 15 miles farther than I really wanted to go. I expect to do at least 80 miles tomorrow, but at least it's supposed to be a nice day. The winds probably won't cooperate, but if I get an early start and the hills aren't that bad, it'll be only a few more miles than I did today.