Albuquerque to Moriarty
Miles: 53
Terrain: Long slow climbs for the first 2/3 of the day, then mostly downhill for the rest
Weather: Cool and sunny, crosswinds early then finally some welcome tailwinds

For the last few days I've had some choices about where to stay the following evening. Yesterday's choice was an easy one, since the first option was too short, so I ground out a century and more to make it work. Well, today was similar except the first stopping option was about 50 miles away and the second (Santa Rosa, NM) over 120 miles out. Plus the first 35-40 miles of the day were going to be climbing. So after the last few extremely difficult days I figured I was entitled to an easy one. Well, 2000+ feet of elevation gain isn't really easy, but compared to a few days ago's back to back grindfests, it sure looked easier on the map.

Things started out all right, with a brief drop to the Rio Grande and a quick visit to Old Town, a historic district here in Albuquerque. After that things got tougher as basically the whole city sits on the side of this immense slope going up from west to east. I took my time, meandering around on various bike paths and bike routes, geocaching to keep things interesting, and zigzagging so I didn't have to spend too long climbing. The bike seemed very slow and sluggish even on the rare flat areas, and I soon found out why - the back tire was getting low on air.

A couple of days ago I noticed the front tire was low on air right after starting out in the morning. I didn't even mention it here in the blog since it happened so early in the day and was such a non-event that I didn't even think to bring it up. I just got out the floor pump (my best purchase of the trip so far), filled the tire up to 80 psi, and rode on, checking regularly to see if it had a slow leak. A few hours later I did notice it a bit lower and pumped it up again, this time making sure the valve stem was tightly screwed on, and never had another issue with it after that. Even after it sat all night the next day it never lost any pressure, so I figured it must've been the valve and that was that.

So getting back to today, here's the rear tire starting to show the same kind of slow leak like symptoms. I pumped it back up, listened for a hiss and heard nothing, so rode on. It seemed okay for a couple of hours until I got out of the city and then it got low again, whereupon I pumped it one more time, and this time it only lasted 30 minutes. So I finally gave in and changed the tube, and I still have no idea what that was all about. I can't seem to find any leaks here in the hotel room (by putting the tube under water to watch for bubbles) so whatever it was must only happen when my weight is on the wheel. How bizarre. Anyway, that's another tube down the drain, as I can't repair it if I can't find the leak, and can't trust it to hold air at all.

That wasn't the only bike problem I had today, though. Something very near to disaster happened when I shifted gears and dropped my chain (it happens sometimes, rarely) and for some reason the chain got hung up in the front cranks so badly I didn't think I'd be able to get it out of there. In the process of freeing it (or maybe when it got stuck, I don't know) one of the chain links got bent, and now the gears skip all the time. This is annoying as hell but the bike's at least rideable, although only the middle ring on the front can be used effectively, so going up steep hills is going to be a real challenge. Trying to pedal on level ground makes the chain jump all over the place, too. Unfortunately I'm probably stuck with it like this until Amarillo as there are no bike shops between here and there and I'm not going back to Albuquerque. I rode the last 20 miles of the day with it like this and I think I can stand it for a few days if I must.

Anyway, the ride itself wasn't too bad...there was a lot of climbing, and late in the day it seemed to drag on and on, but I kept telling myself it was so much easier than getting into Payson, and that really helped. (Nothing's going to compare to that climb into Payson.) Then I finally crested the ridge just before Edgewood and things got super easy. Thanks to all the early geocaching, which really does slow me down a lot, and then the chain and tire issues later, I didn't get into town until after dark, but at least I didn't have to ride on the highway today.

I did take a few pictures, but not many. First off here's something I forgot to mention. I talk all the time about things I lose or that get broken, but here's something I actually found along the way that really helps a lot. This is a like-new miner-style headlamp that straps on over your helmet for hands-free night riding. I found it by the side of the road a couple of days ago, with almost no damage and fresh batteries installed (that still work!). This has come in very handy after sunset, as once it's in place the headlight points wherever I turn my head, letting me survey the road for obstacles a whole lot better...and look at cars approaching from side streets, so the drivers are much more likely to notice me. A light mounted on your handlebars is much less flexible. Anyway, here's what it looks like...the button on top has 3 settings, so I can brighten it up if it gets really dark. 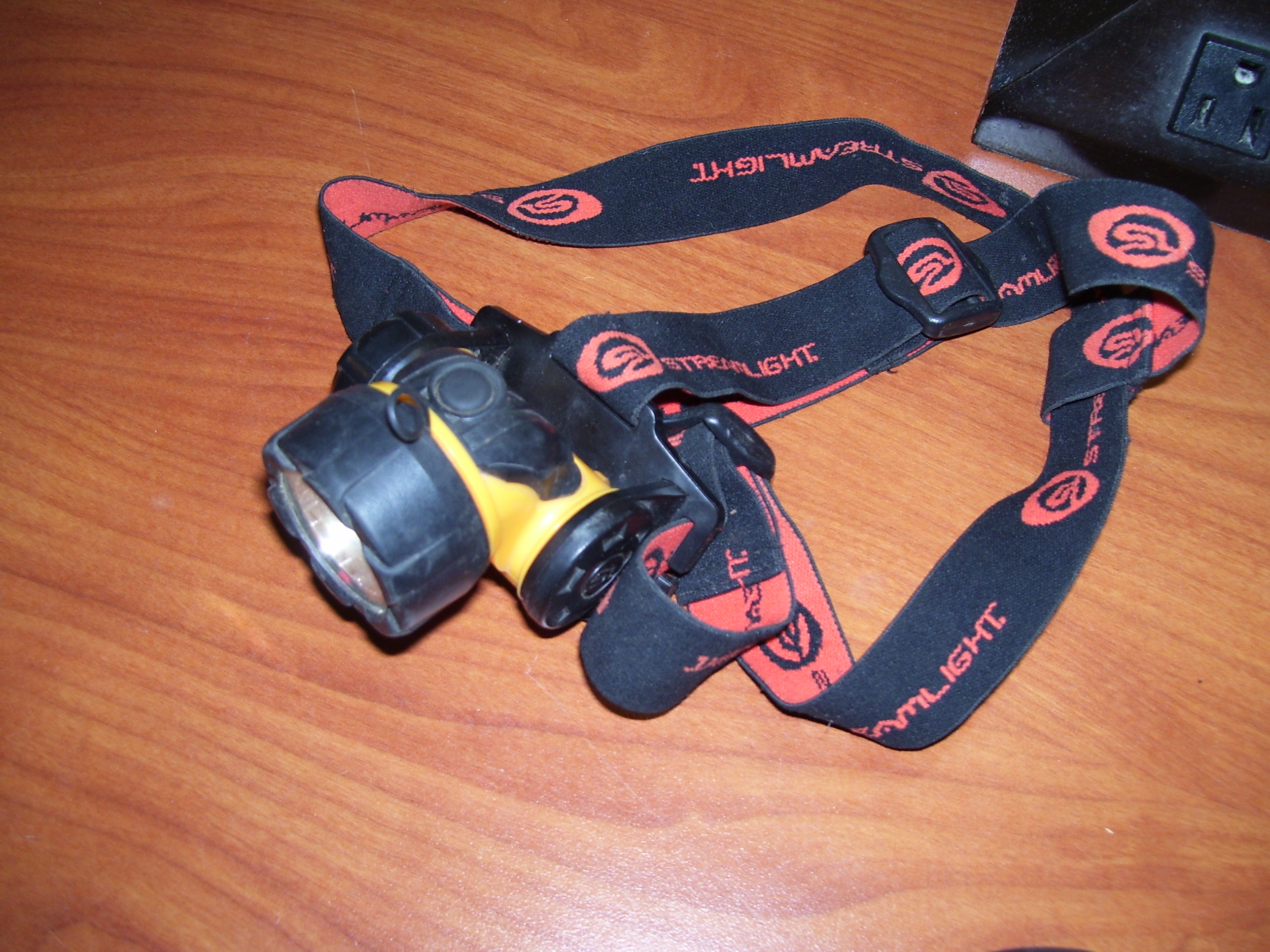 Now on to the day's ride. Here's a view of Albuquerque from the top of a pedestrian overpass I used right after leaving the hotel. Off to the left there, and lower than my current elevation, there's a bike path that proceeds down towards the river that the highway is crossing. After that point you basically go up the rest of the way into town and out the other side. 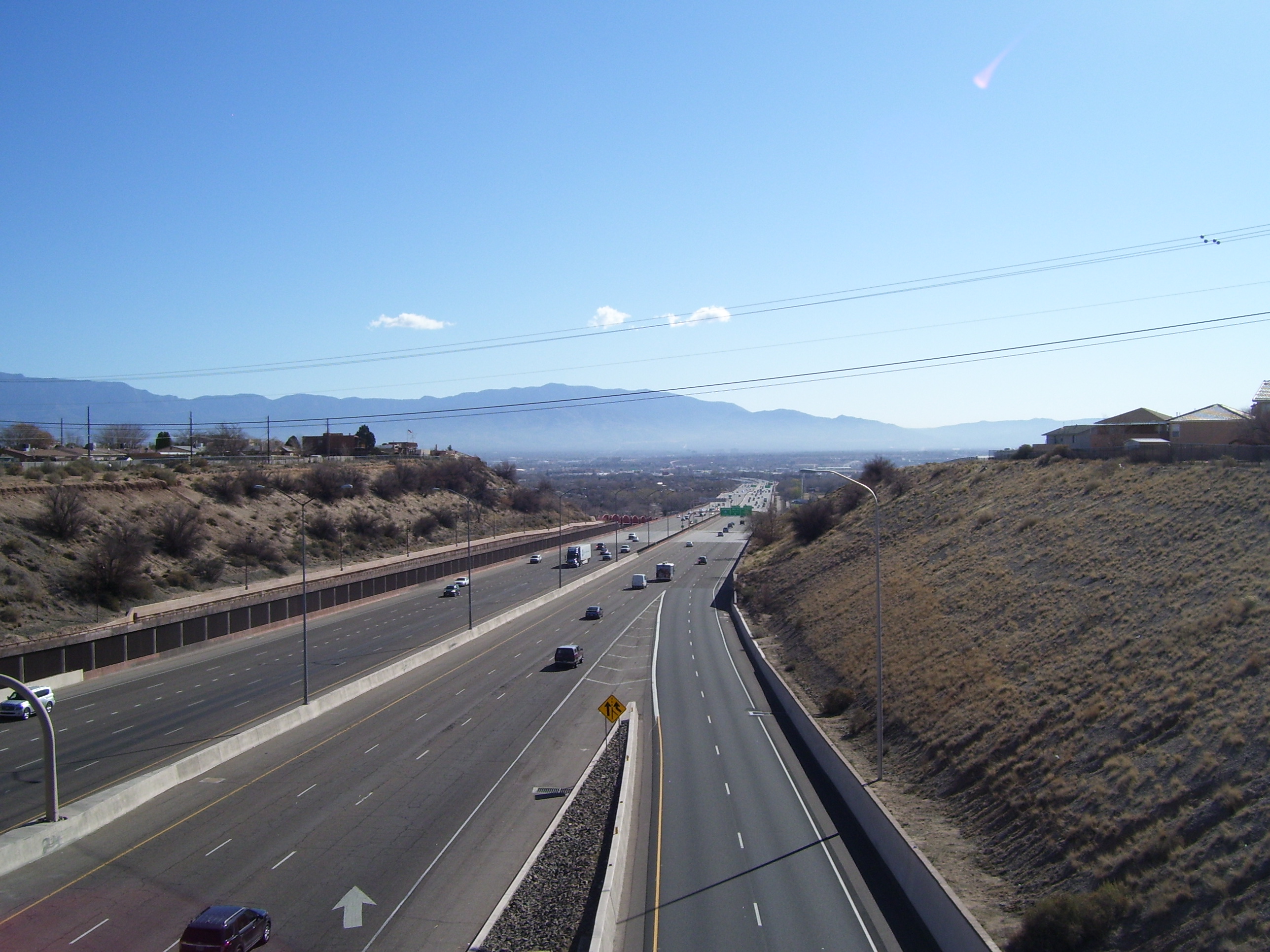 This is what the Rio Grande looks like in Albuquerque...not nearly as impressive as it is on the border of Texas and Mexico. 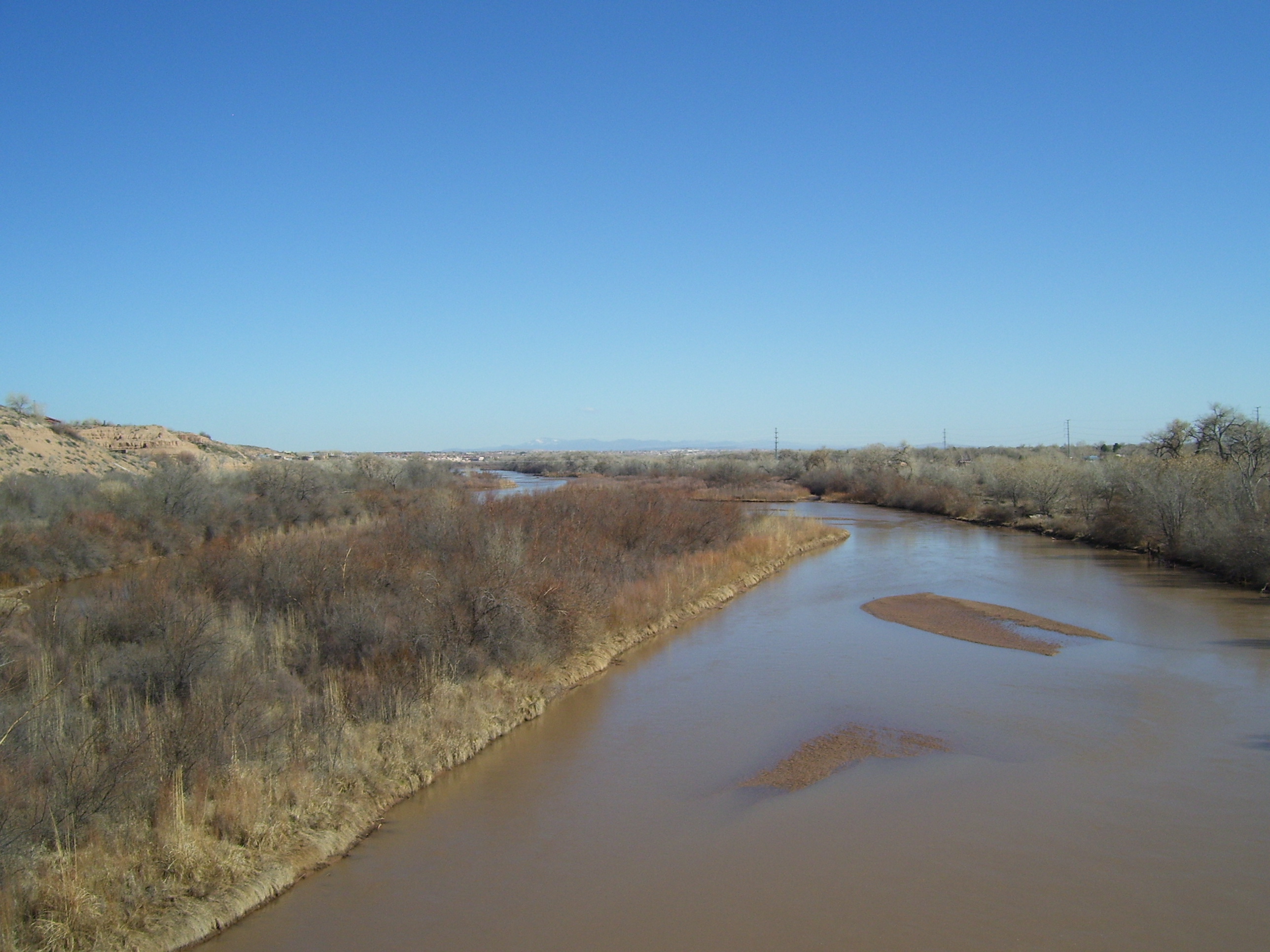 Shortly after this I visited historic Old Town, which had a lot of shopping available and quaint little stores to visit, none of which I felt comfortable doing with my bike in tow. 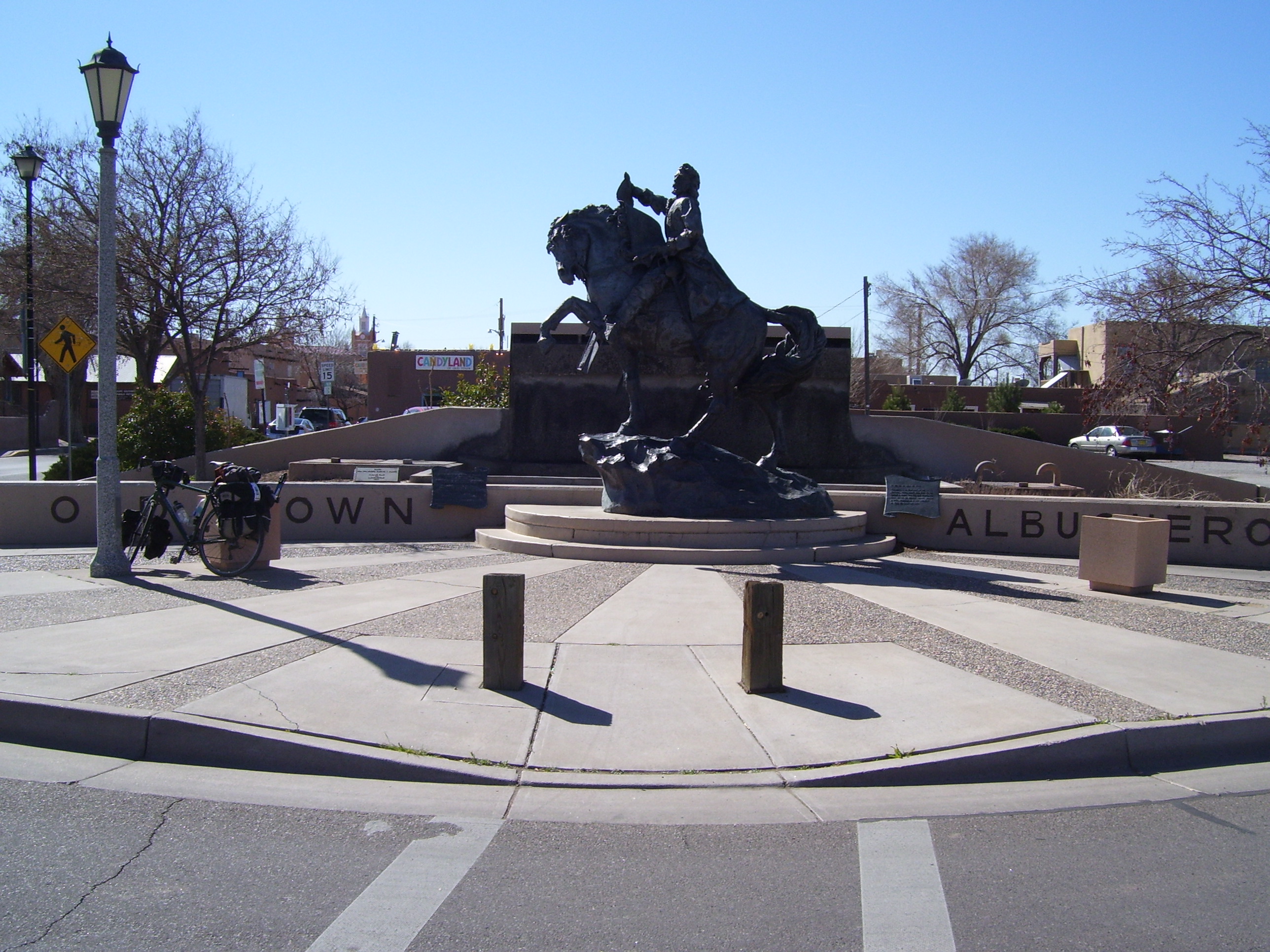 I did at least stop to check out this odd carving (which didn't come out very well in the photo) of Our Lady of the Tree, a carving of Our Lady of Guadelupe made by a man named Toby Avila, one of only 26 Albuquerque men to return from the Korean War. He made the carving with only a kitchen knife and a mallet in 1959 on the inside of a 300-year-old cottonwood tree, then died less than a week after finishing. Very impressive and the sort of things most tourists miss when they're too busy shopping. 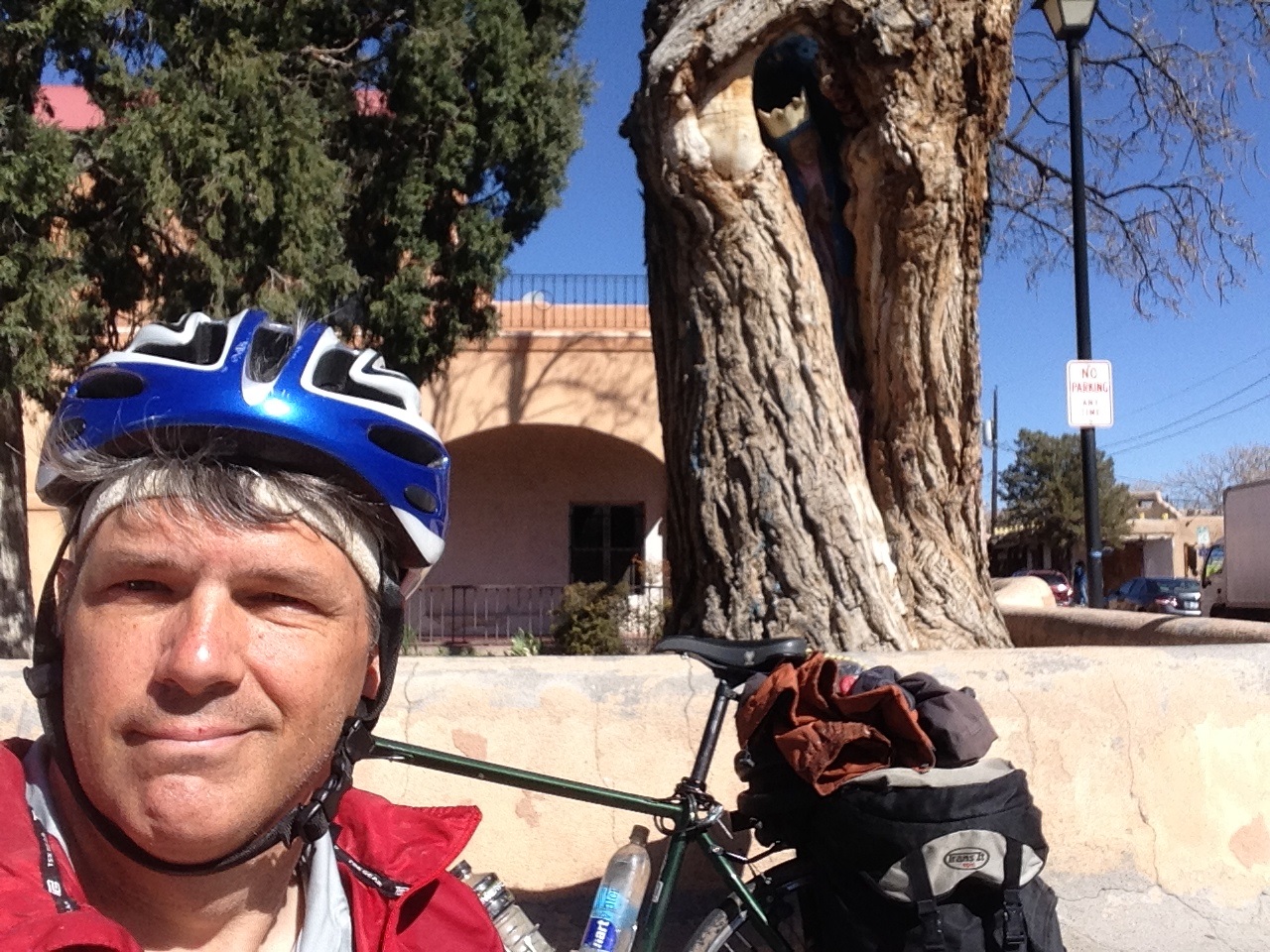 You might notice in that picture also that my lips are pretty chapped. In fact they've been that way for the last 12 days or so, completely resisting all attempts to fix the problem with the usual lip balms. That's what happens when it's cool and dry and sunny all day, I guess.

Anyway, here's another shot of Albuquerque, this time from a bike path that runs along a drainage tunnel. The mountains running along behind this city sure are cool looking. 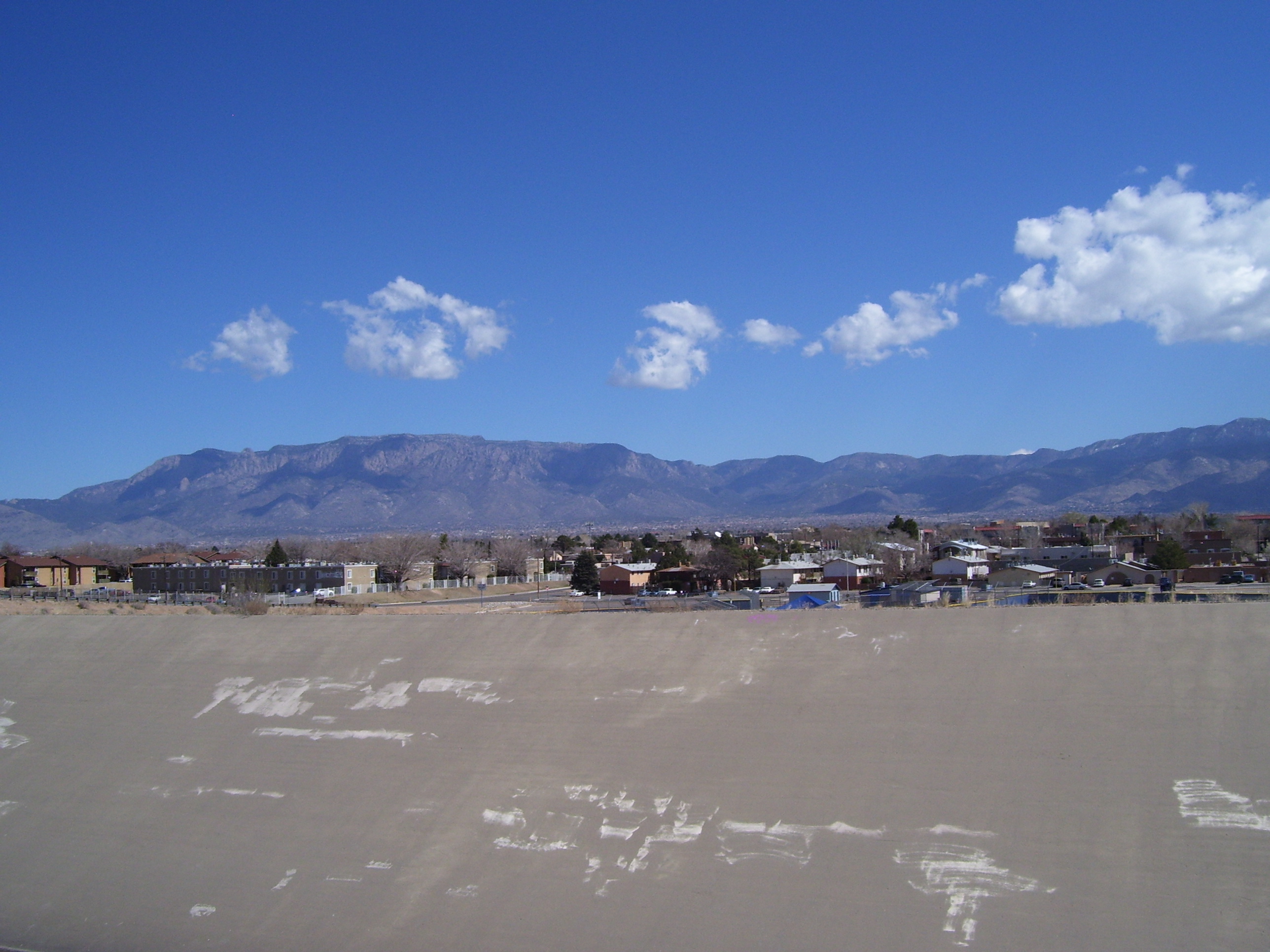 Unfortuantely most of the ride today was through urban and residential stuff that wasn't all that interesting. Eventually I did follow I-40 out of the city, never actually getting onto the freeway since Historic Route 66 follows along beside it all the way to Moriarty, my destination for the day. Here's a shot looking back at the city as I climb my way slowly eastward. 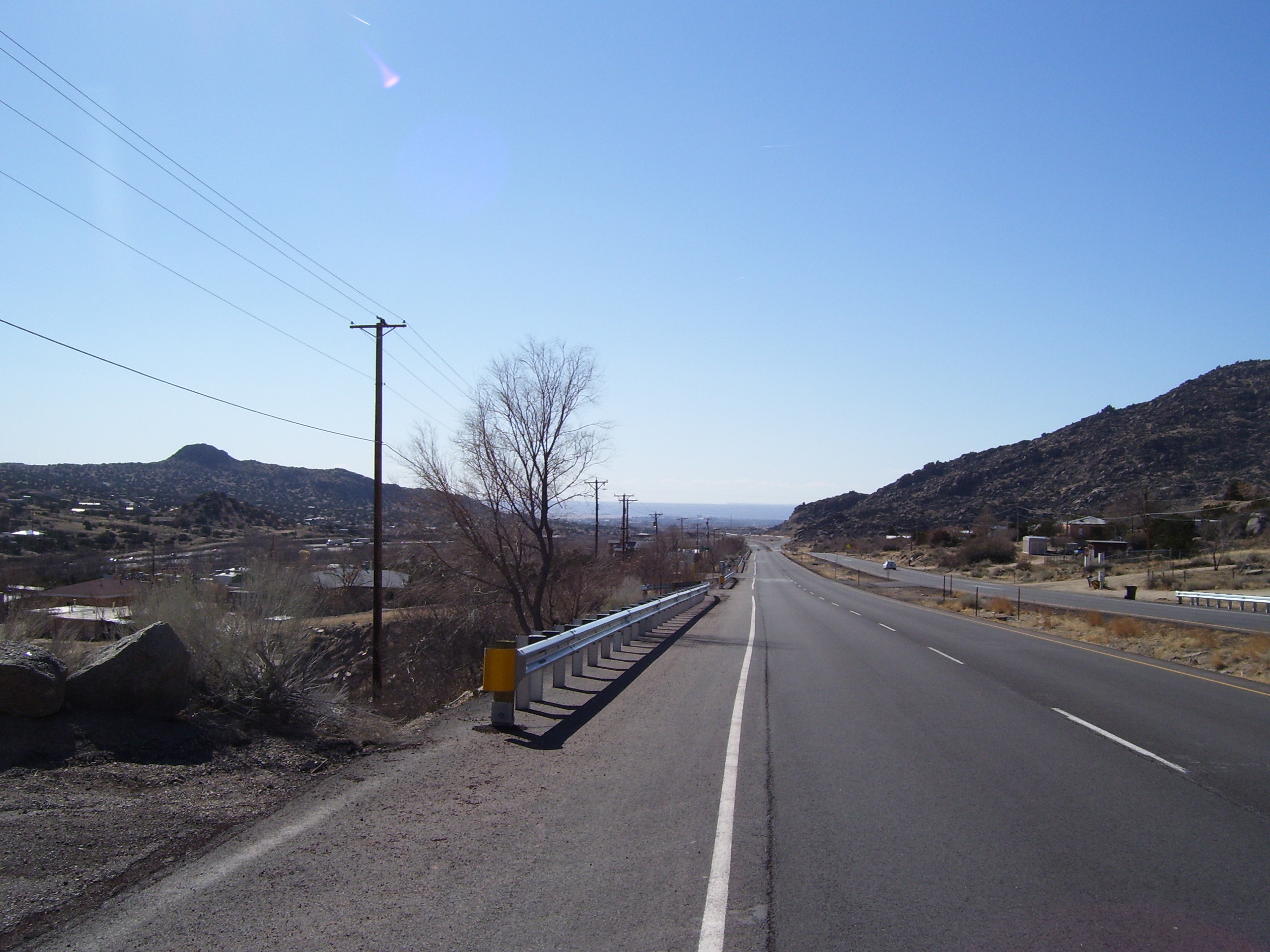 This is an amazing stretch of road right here, which sadly doesn't translate well to pictures, but here's the story: the road's surface is paved in such a way that cars driving along at the speed limit (45mph) make music with their tires. It's called a "singing road." I stopped for a cache and some water and just listened to car after car going past with music playing out from underneath their wheels. Super cool! If you're ever in this area come on out here to Route 66 east past Canuel, and there are signs explaining it to guide you as you go. If traveling east on I-40, get off at exit 170, go east on Rt 66 (NM 333) for 5 miles and get back on the freeway at exit 175. It's worth it for the sheer coolness factor alone, never mind the scenery. 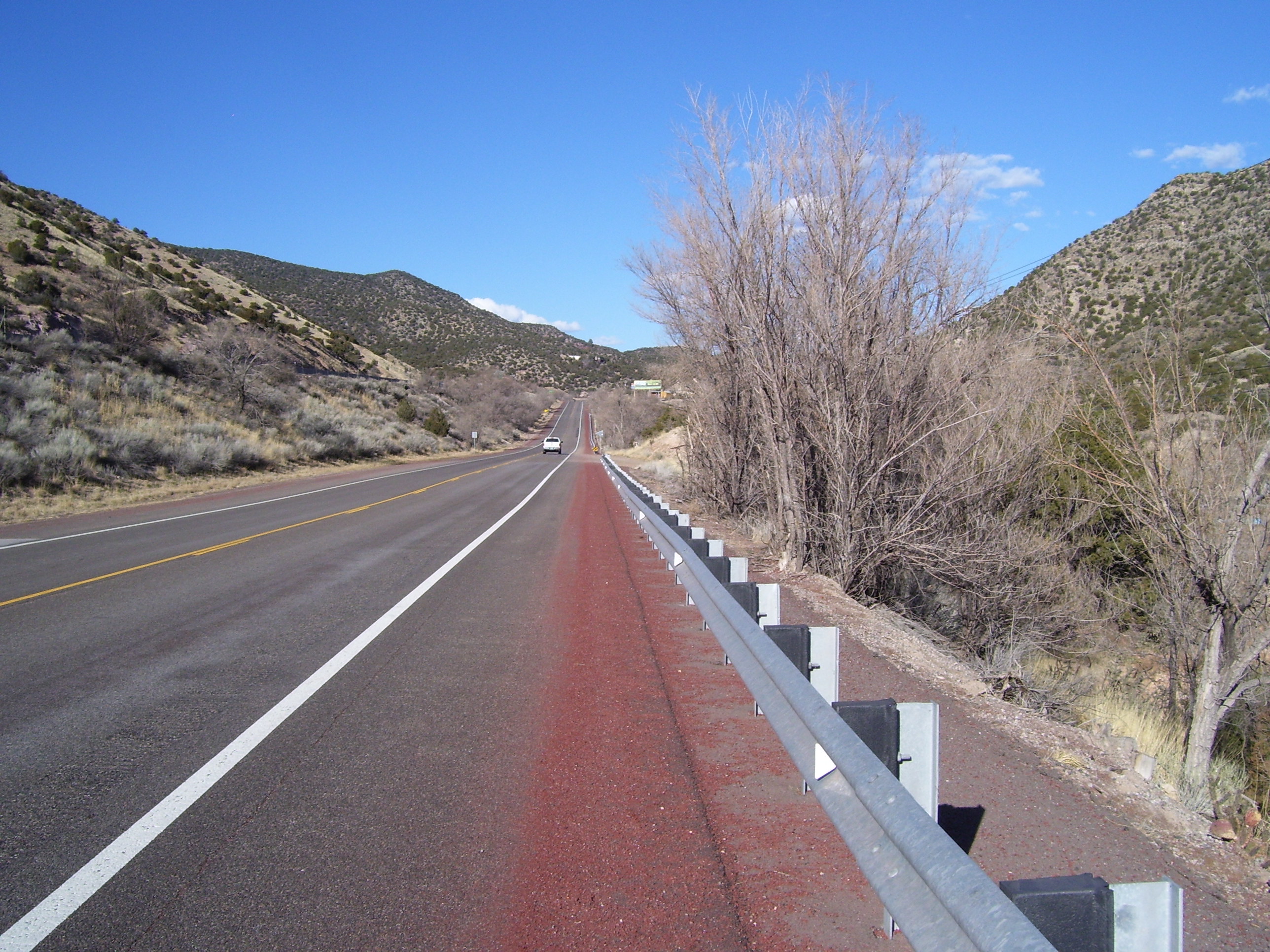 And one final thing to mention for today...several times in Albuquerque and nearby I saw white-painted bicycles with flowers on them, left (I assumed) as memorials to cyclists who were hit by cars. In addition to that, they're also reminders to motorists to share the road. Very sad but a very powerful message as well. These are known as "ghost bikes." 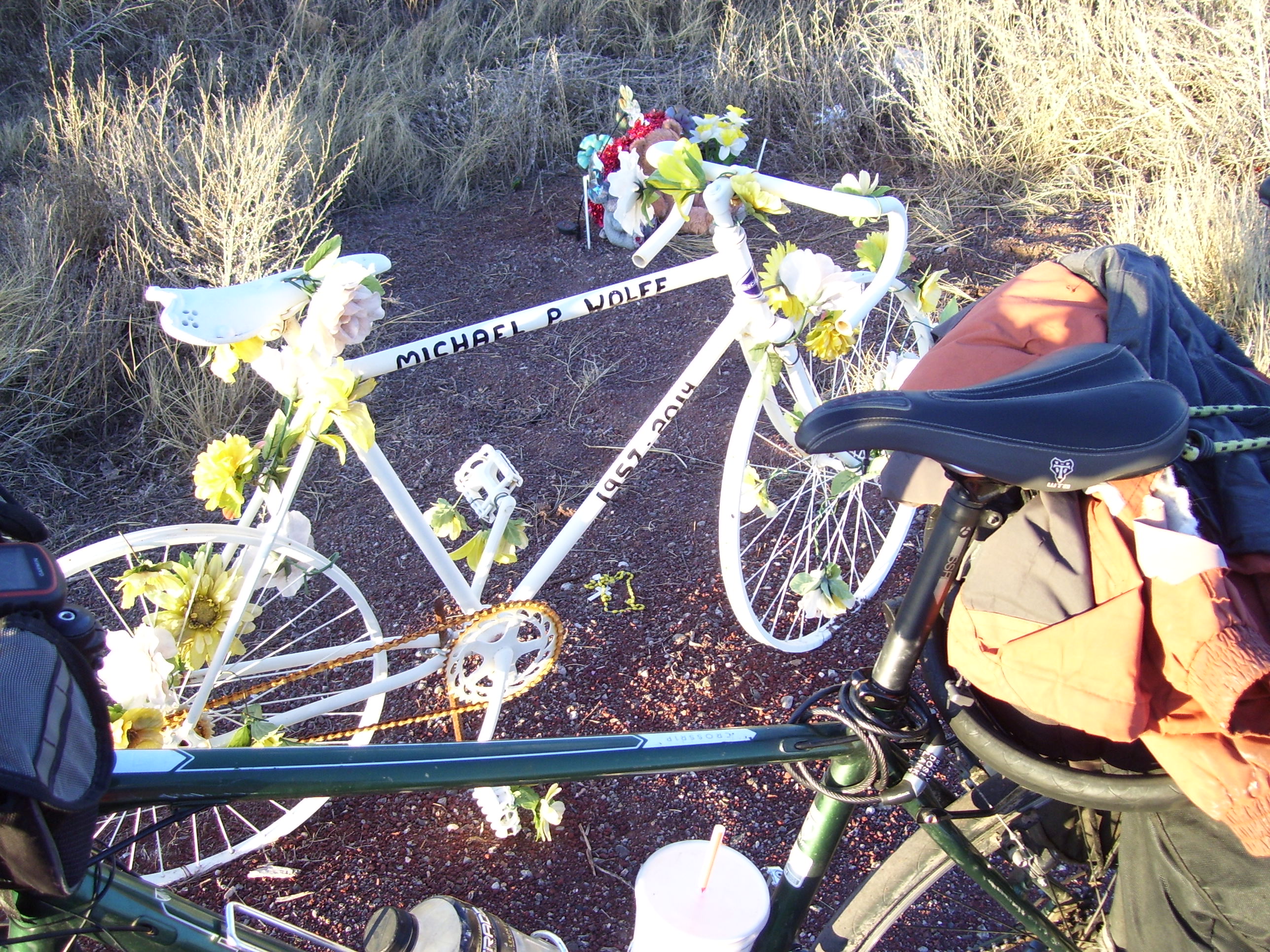 And that's it for today. Shortly after passing this spot the sun went down, so I made my way to my hotel and got some dinner, as usual. Every evening is about the same thing: get food and a hotel (not necessarily in that order), get a shower, plug in all the things that need charging (typically my phone, MP3 player and rechargeable AA batteries, sometimes the iPad too), get the photos off the camera, update the blog, log my geocache finds, and figure out tomorrow's route. It looks like tomorrow will be an 80-mile trip to Santa Rosa as there aren't really any other options, but if the winds cooperate it shouldn't be too bad.