Looking at the map last night I realized I had two choices today: stop at noon after going about 30 miles, or ride all day and make it to Albuquerque. There just weren't any hotels anywhere in between. Of course I chose the latter option...stopping at noon on a sunny day with mostly downhill riding? Not a chance. Of course this made for my third century this tour when I really didn't even think I had it it me to do one, quite honestly.

The wind was an annoyance today, bouncing around to whatever direction the nearby hills and canyons suggested, but mostly in my face all morning. Every now and then it would help out, but then within a couple of miles would capriciously change again, sometimes 180 degrees in a matter of moments, which drove me crazy. Though the wind wasn't too strong most of the time, it did its job in keeping the day harder than it had to be. Eventually, though, it let me ride for about 20 miles near the end without any issues, and that was the best part of the ride. In fact I made it 24 miles without stopping, a record for this trip so far (not so much because I haven't been able to do it, but because I usually stop for a geocache every now and then and don't go that far without a break).

For the first two-thirds of the ride, all the way through the town of Grants and beyond, I stayed on frontage roads and off the freeway, and the roads were mostly pleasant with very little traffic. Then it was back on I-40 for about 30 miles, including an initial descent through a canyon with a nasty crosswind that almost knocked me over. After that it was smooth sailing until just about 14 miles before my destination, when I had to get onto the frontage road again and encountered a seriously nasty hill that went on for over 4 miles. The sun set on me as I was doing that and after a long day of over 100 miles already, that was pretty taxing. Once I crested that, though, it was easy mode all the way to the fringes of Albuquerque. Once there I got online and booked a room at the Super 8 nearby, ordered a pizza from a Pizza Hut right down the street from the motel, and headed off to fetch it. With the pizza bungee corded to the bike I rode the half mile to the Super 8, checked in, enjoyed dinner and started updating this.

In fact you probably want to see some pictures, so let's start with where I stayed last night. This is the Top of the World Motel in Continental Divide, NM. It doesn't look like much on the outside, but have a look at the room...it's huge, and has everything you need...one of the best rooms I've been in so far, for only $25/night. Plus I can say I slept on the continental divide! 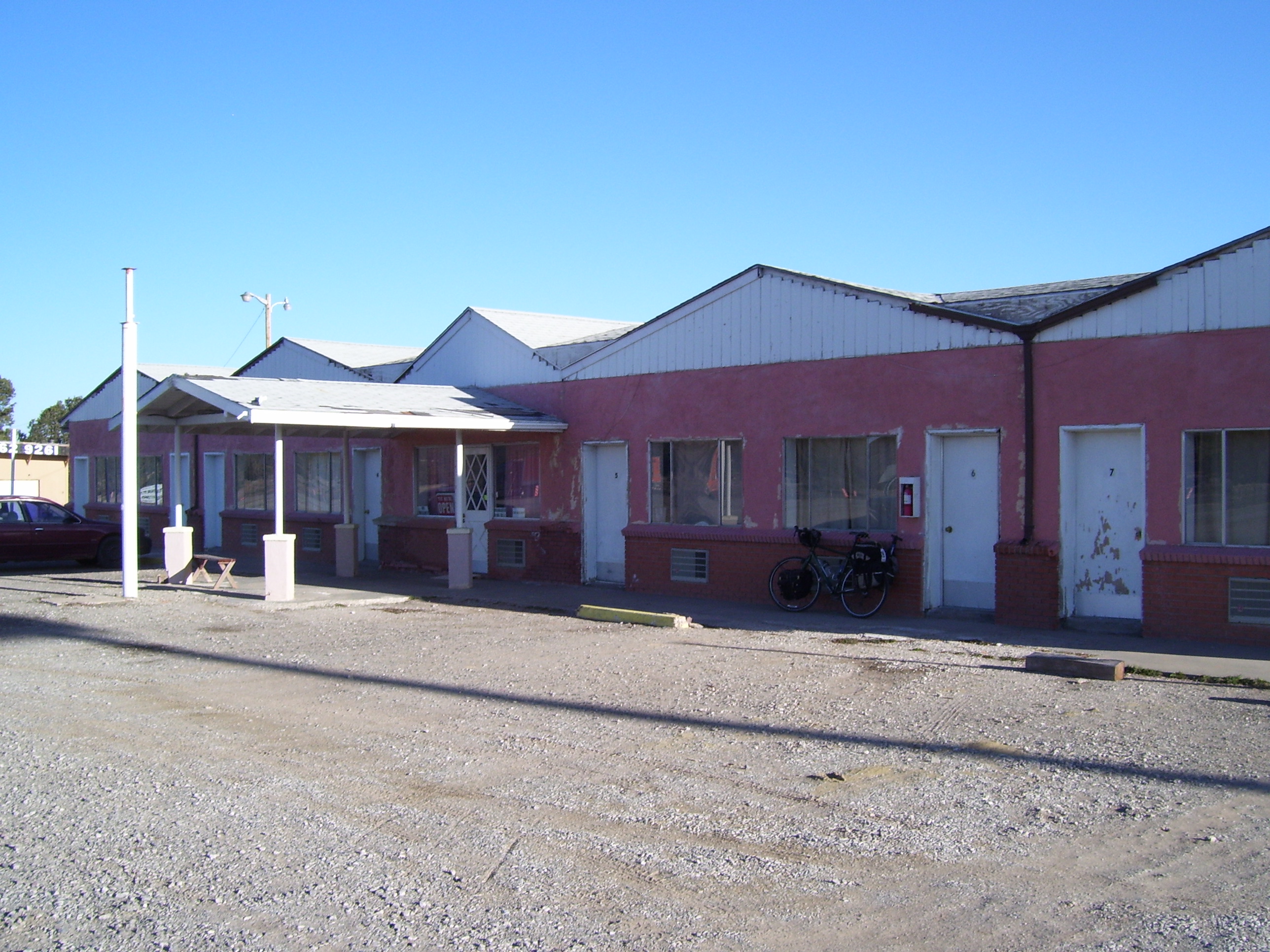 Here's the inside...microwave, fridge, cushioned seat (lower left corner), nice big bathroom, TV, fan, and even a fly swatter. What else could you possibly want in a motel? 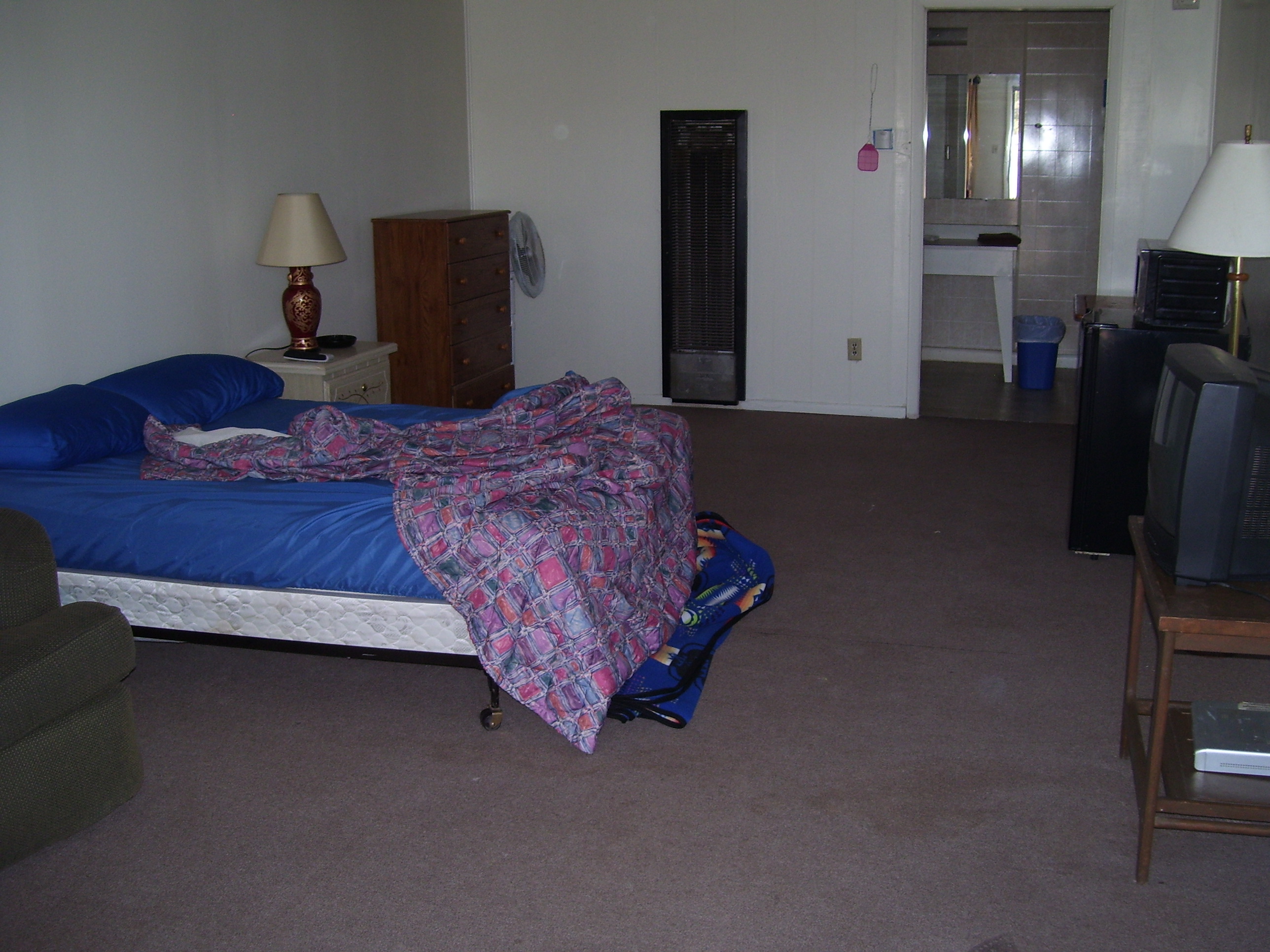 Shortly after leaving the motel I made it official with a visit to the Continental Divide historical marker: 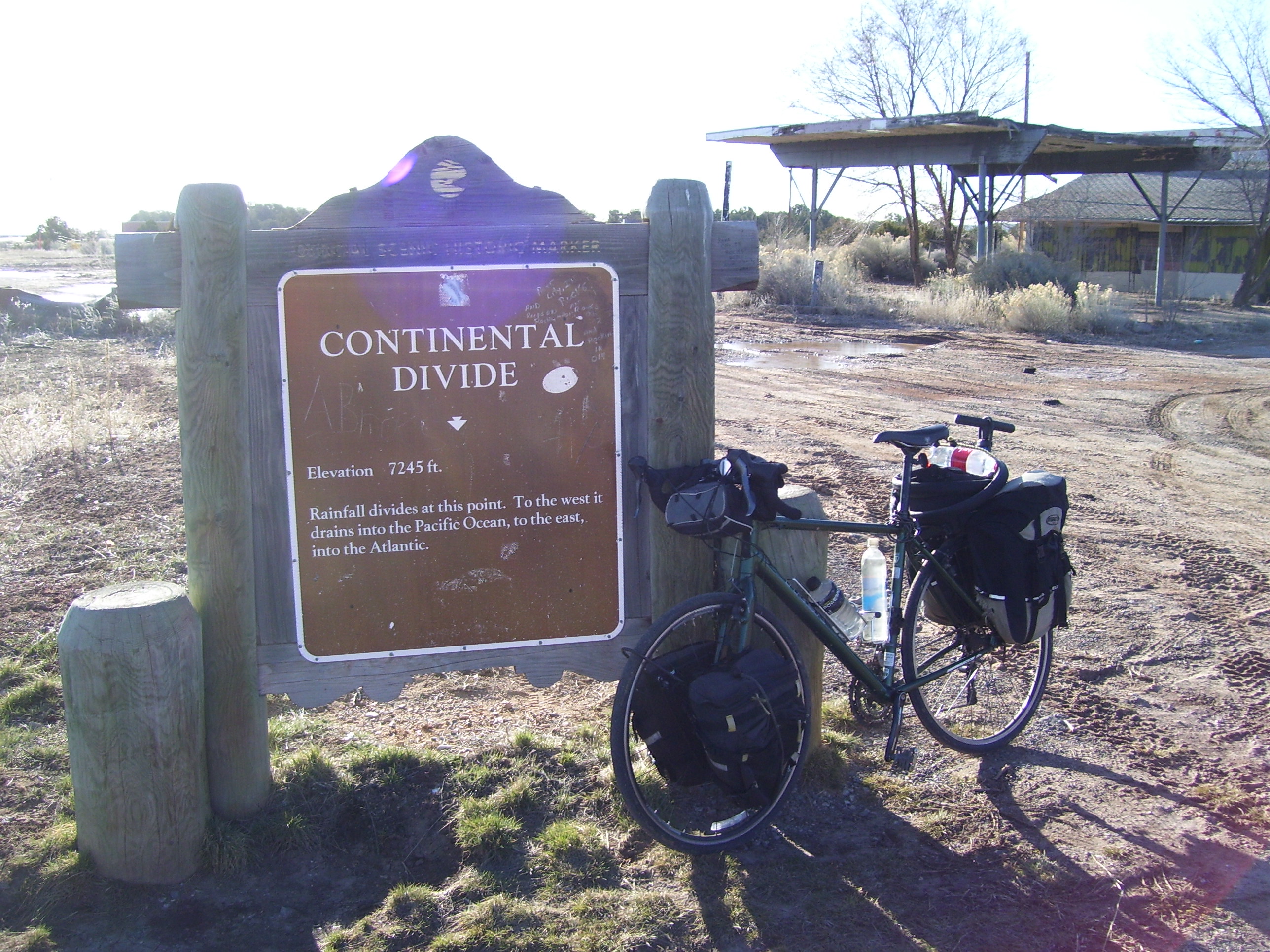 Then it was off to ride on Route 66 for much of the day. 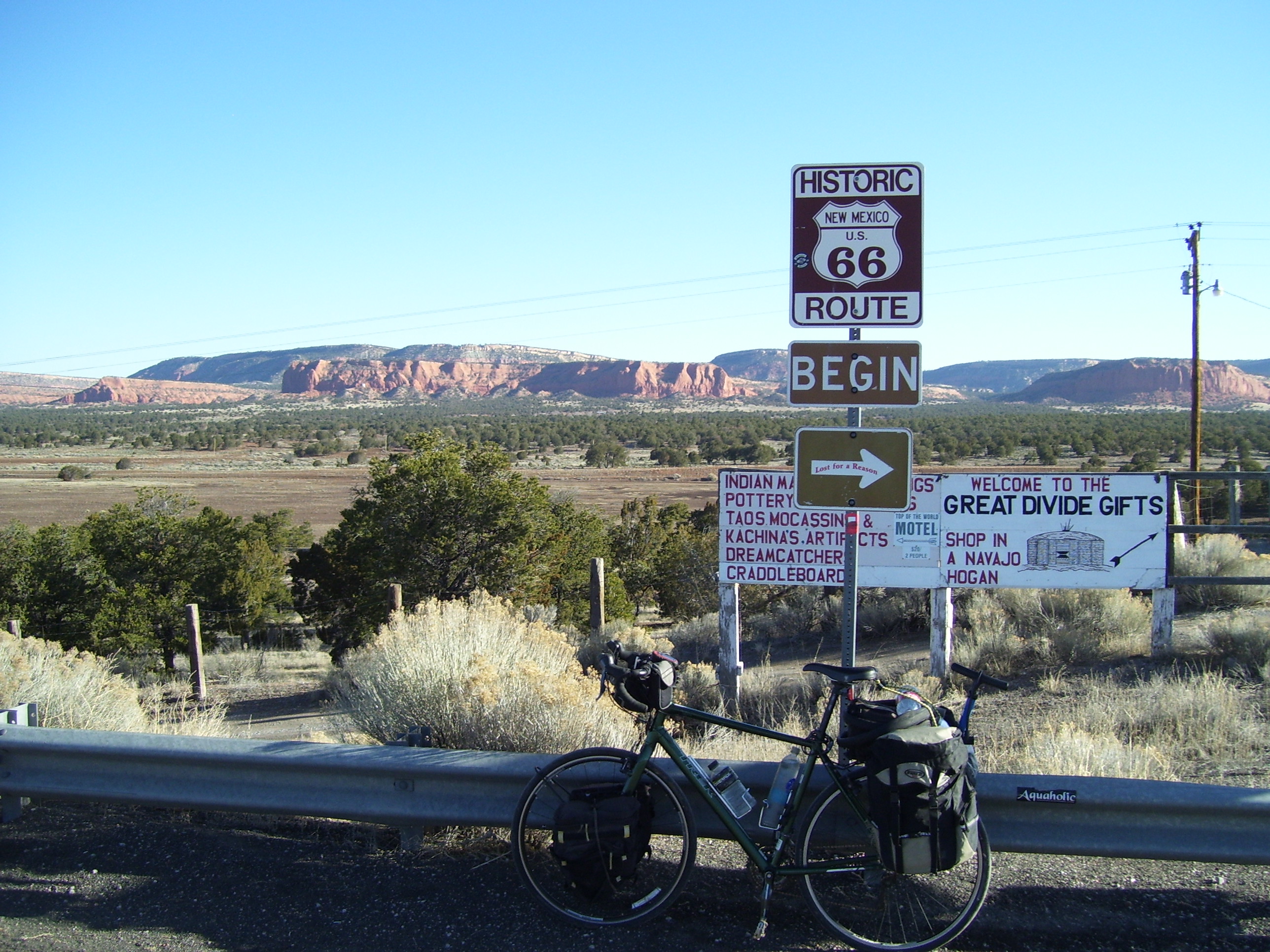 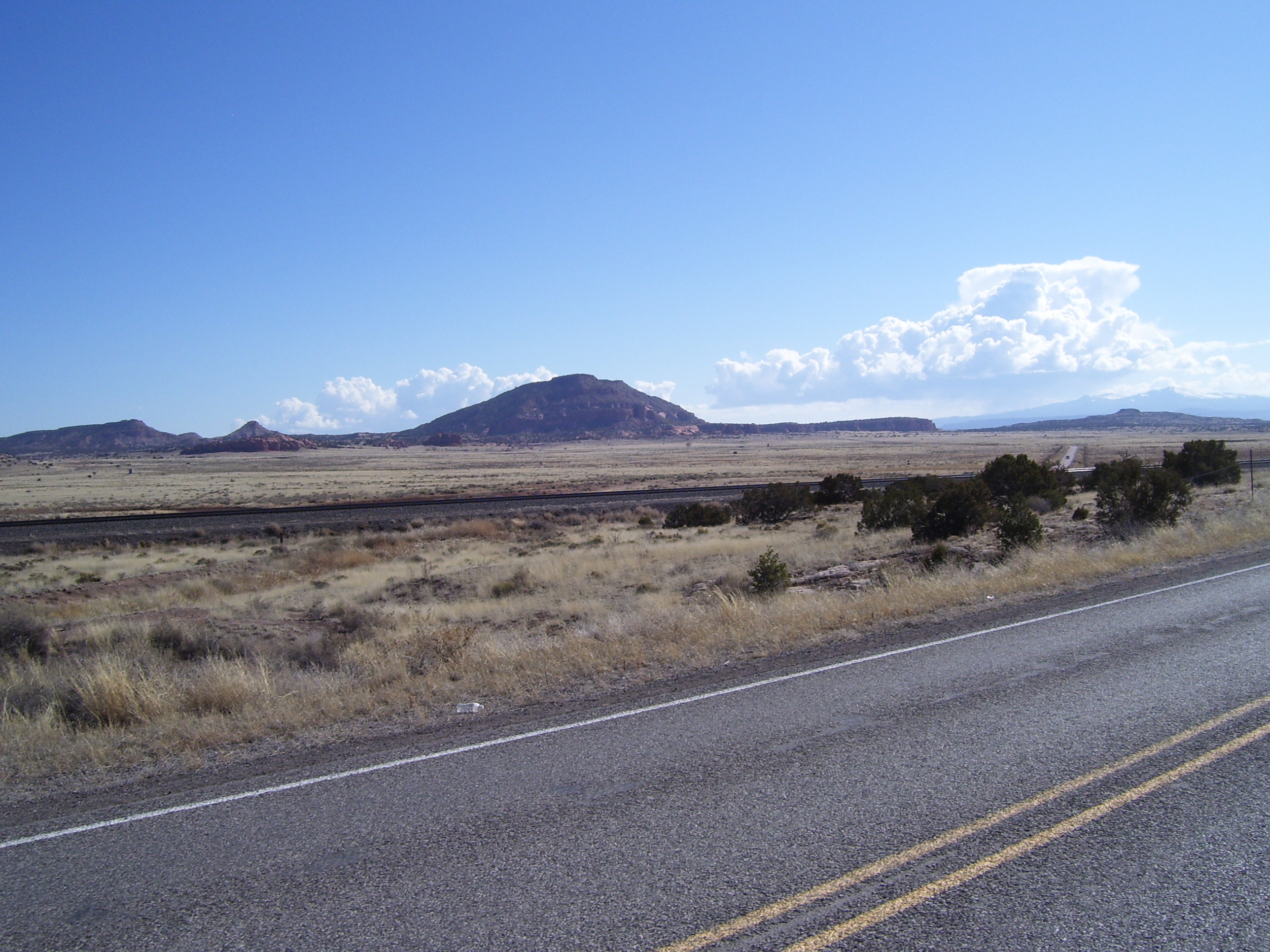 The mountain in the back is Mt. Taylor, actually a volcano. I managed to take this shot just as a train was approaching...nice timing, huh? 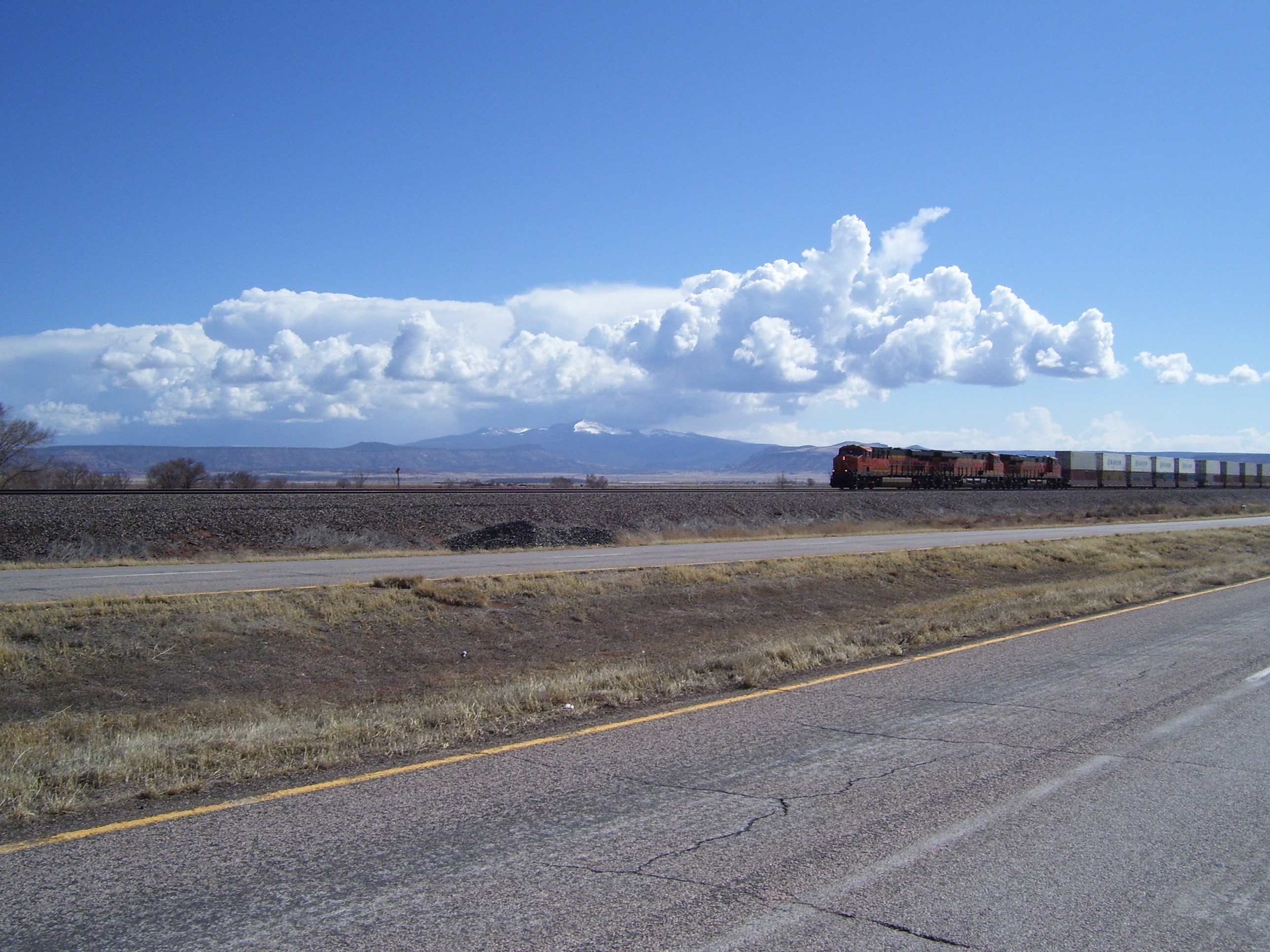 I saw a lot of hills like these today... 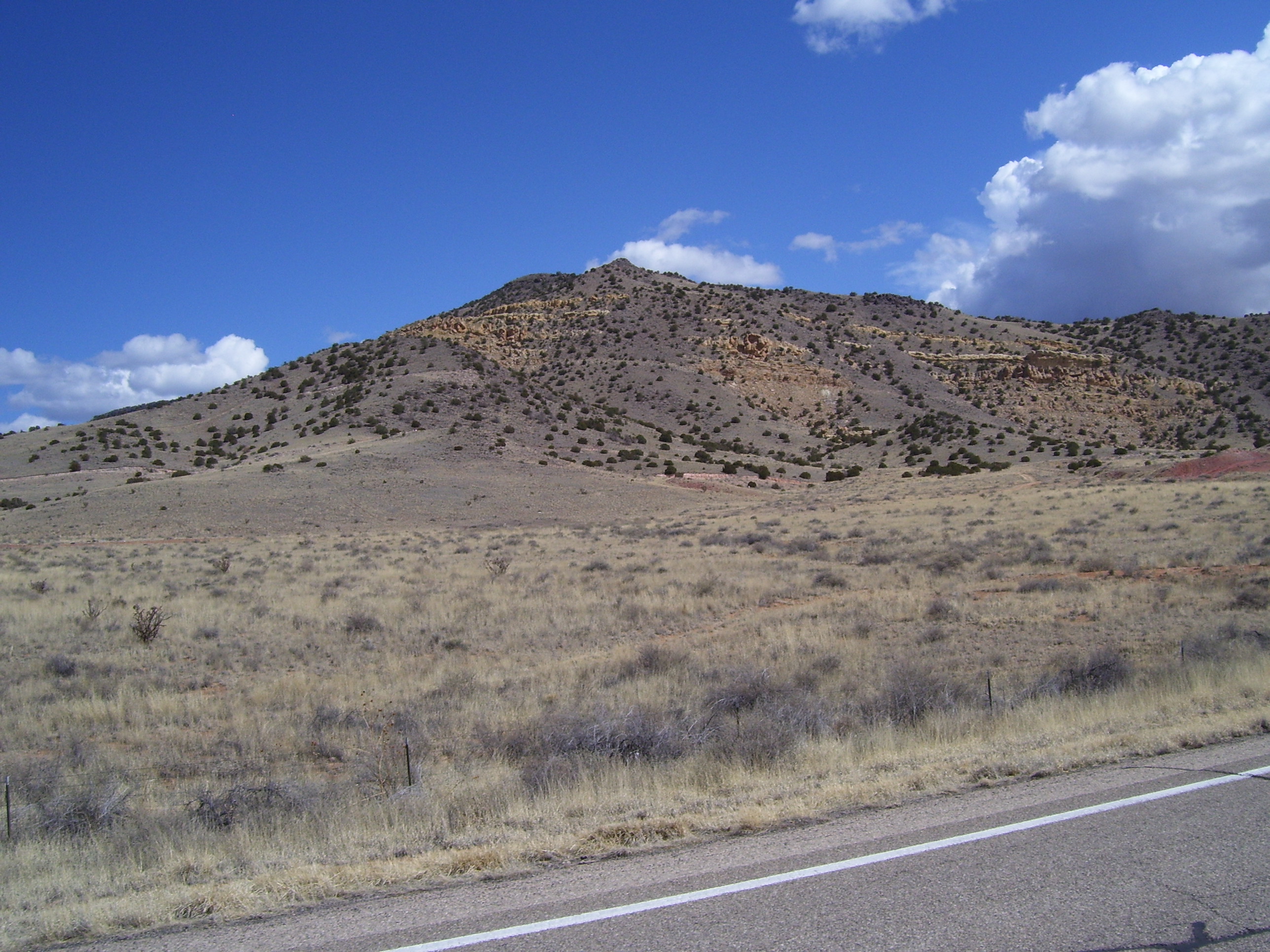 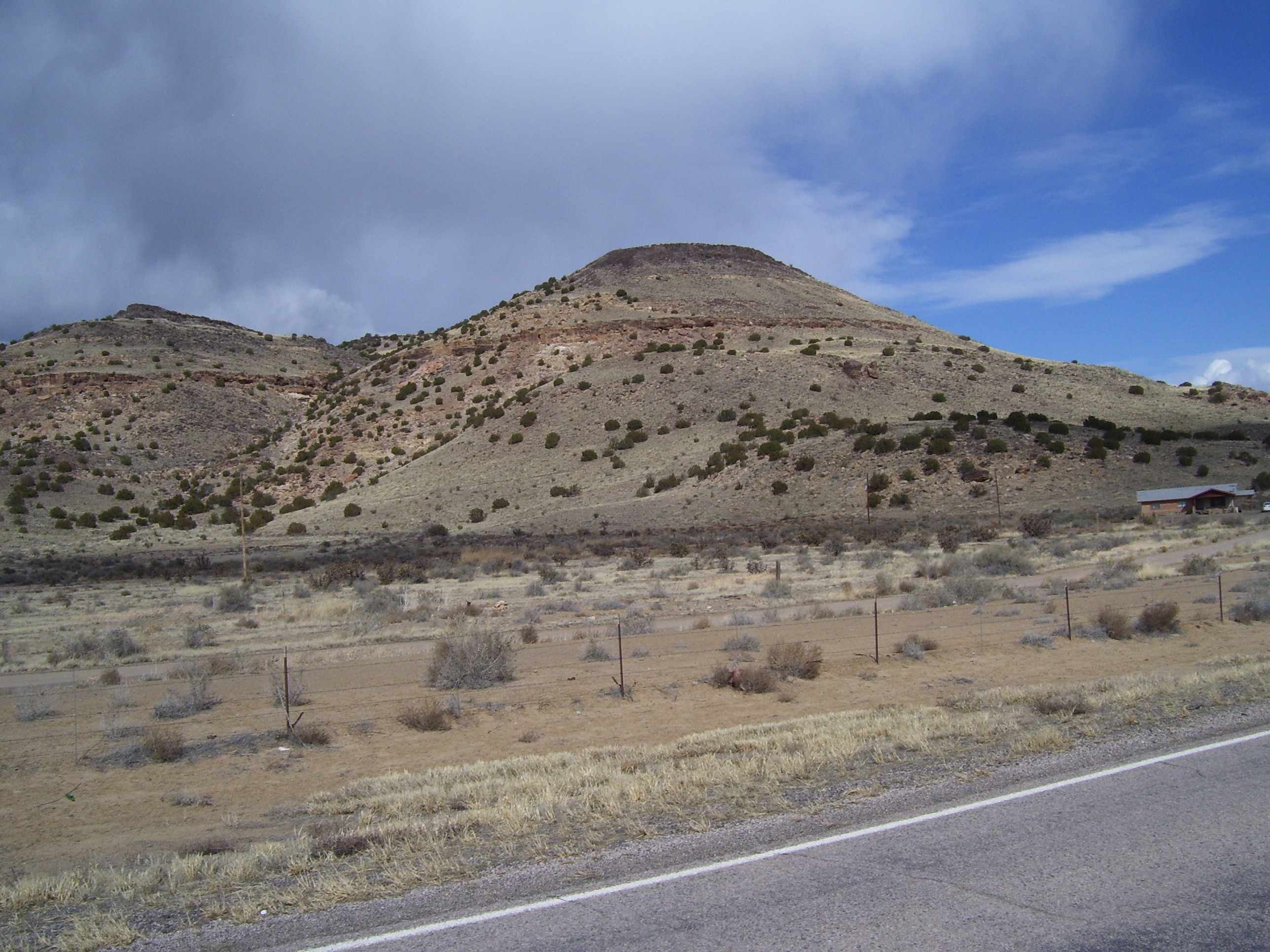 The road ahead stretched on...and on....not very many cars on it, either. The interstate is off to the right, following Route 66 all along here. 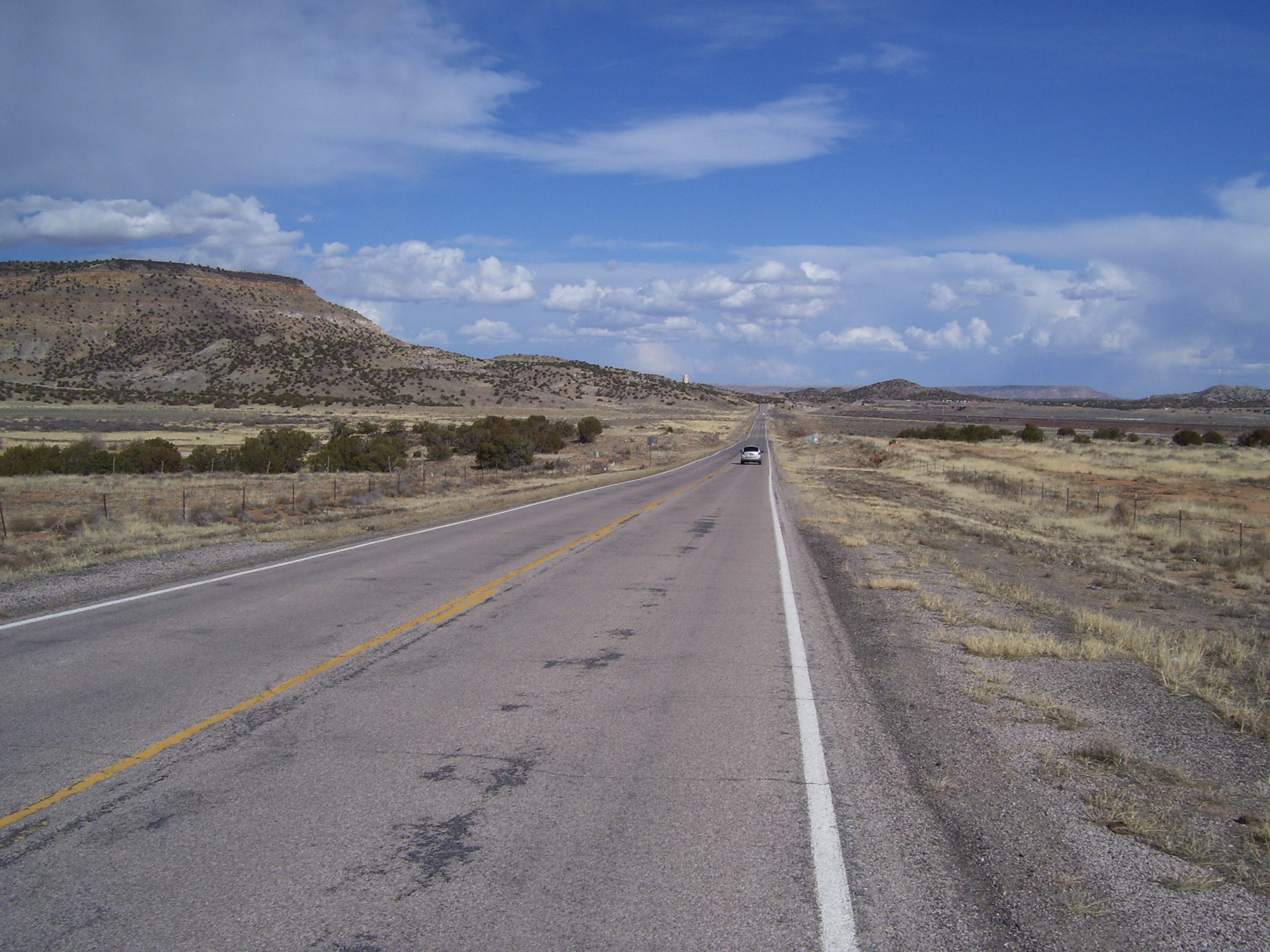 A bit later, same basic idea, but the terrain ahead has changed to something prettier. 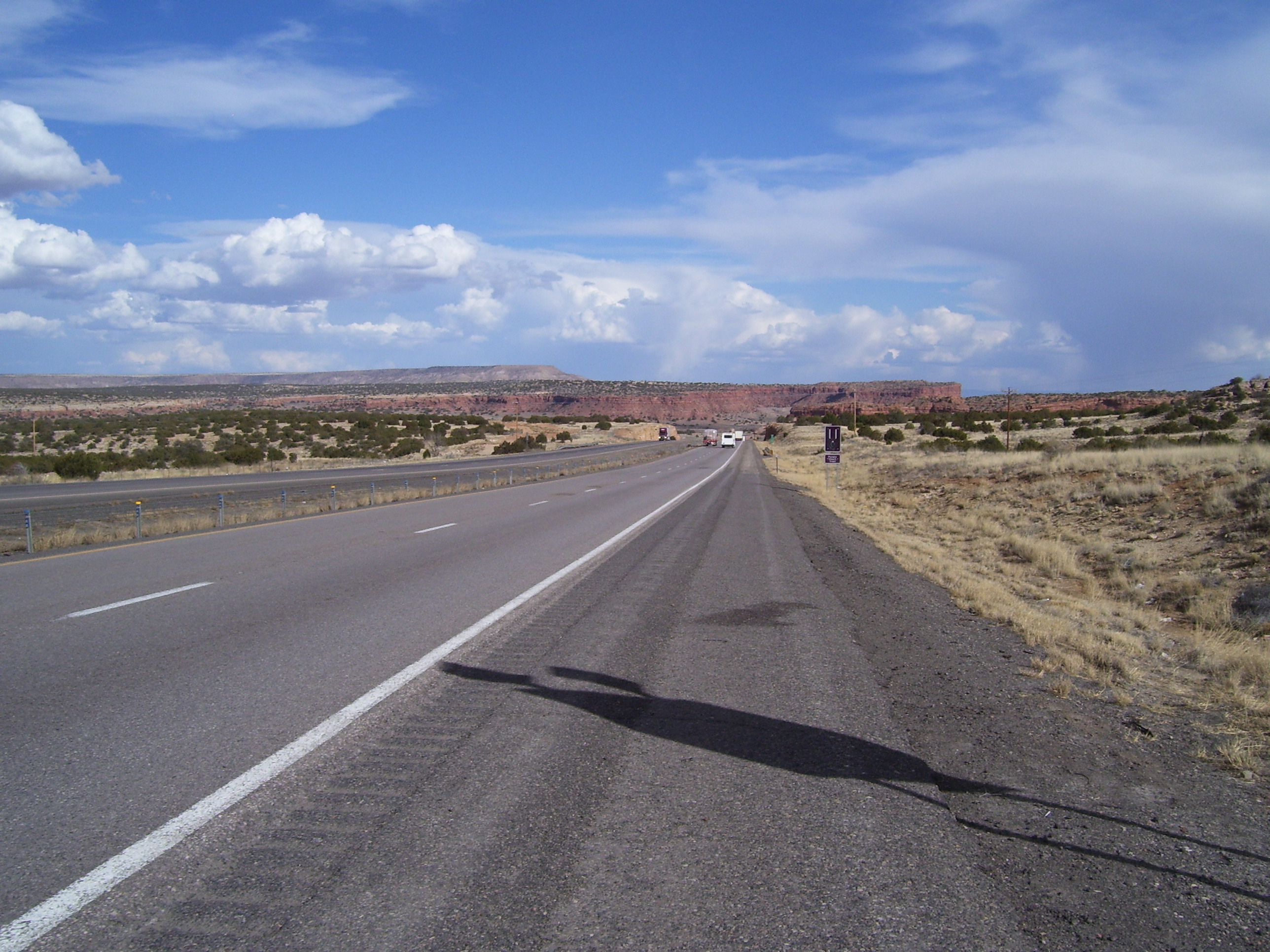 Another interesting rock formation. This is after I got back on I-40. 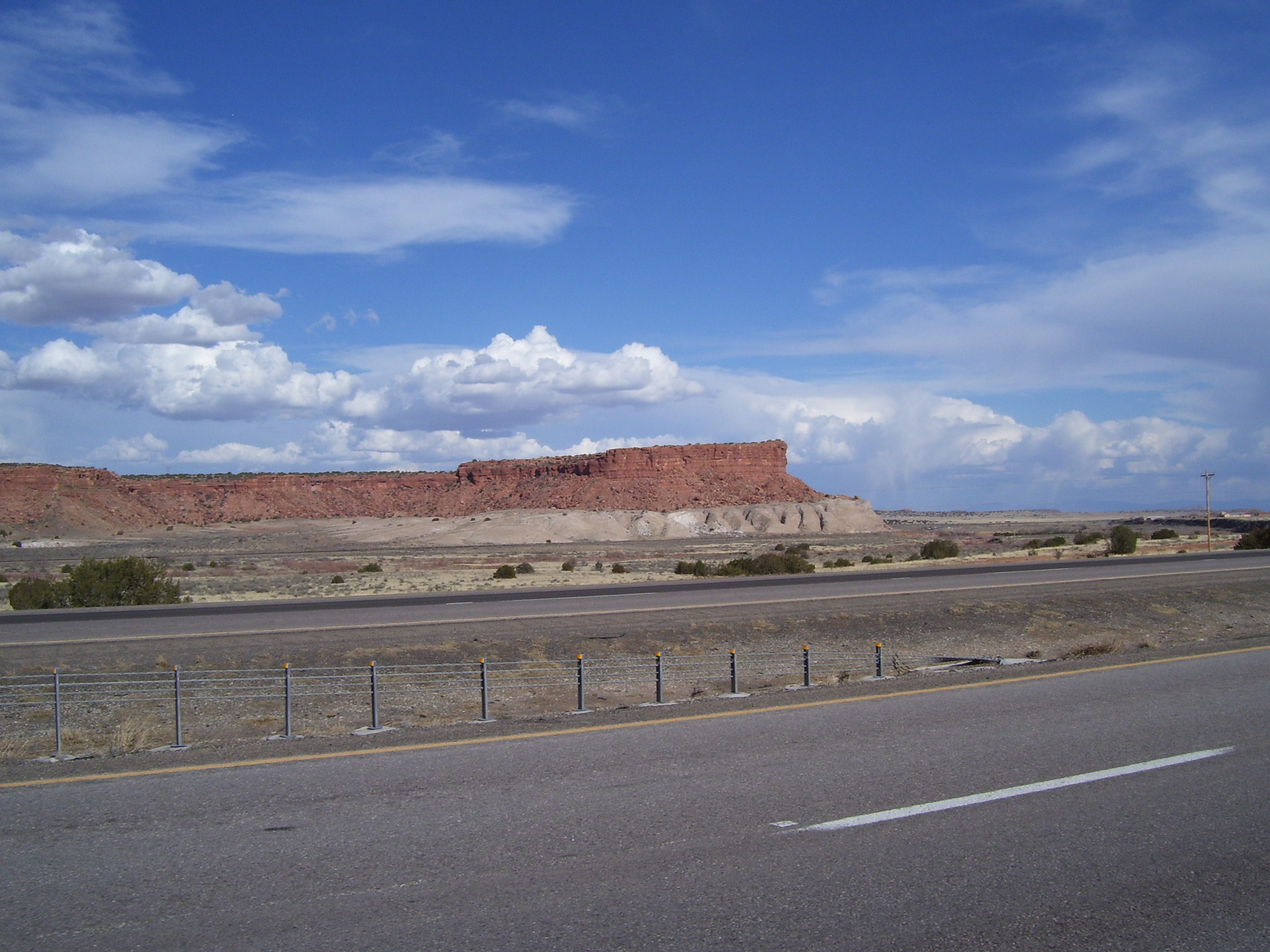 Off to the right from the same basic area. The hills are starting to give way to flatter terrain with the occasional mesa. By the way, I learned today what the difference is between a mesa and a butte. (No it's not a joke or trick question) Anyone out there know without looking it up? 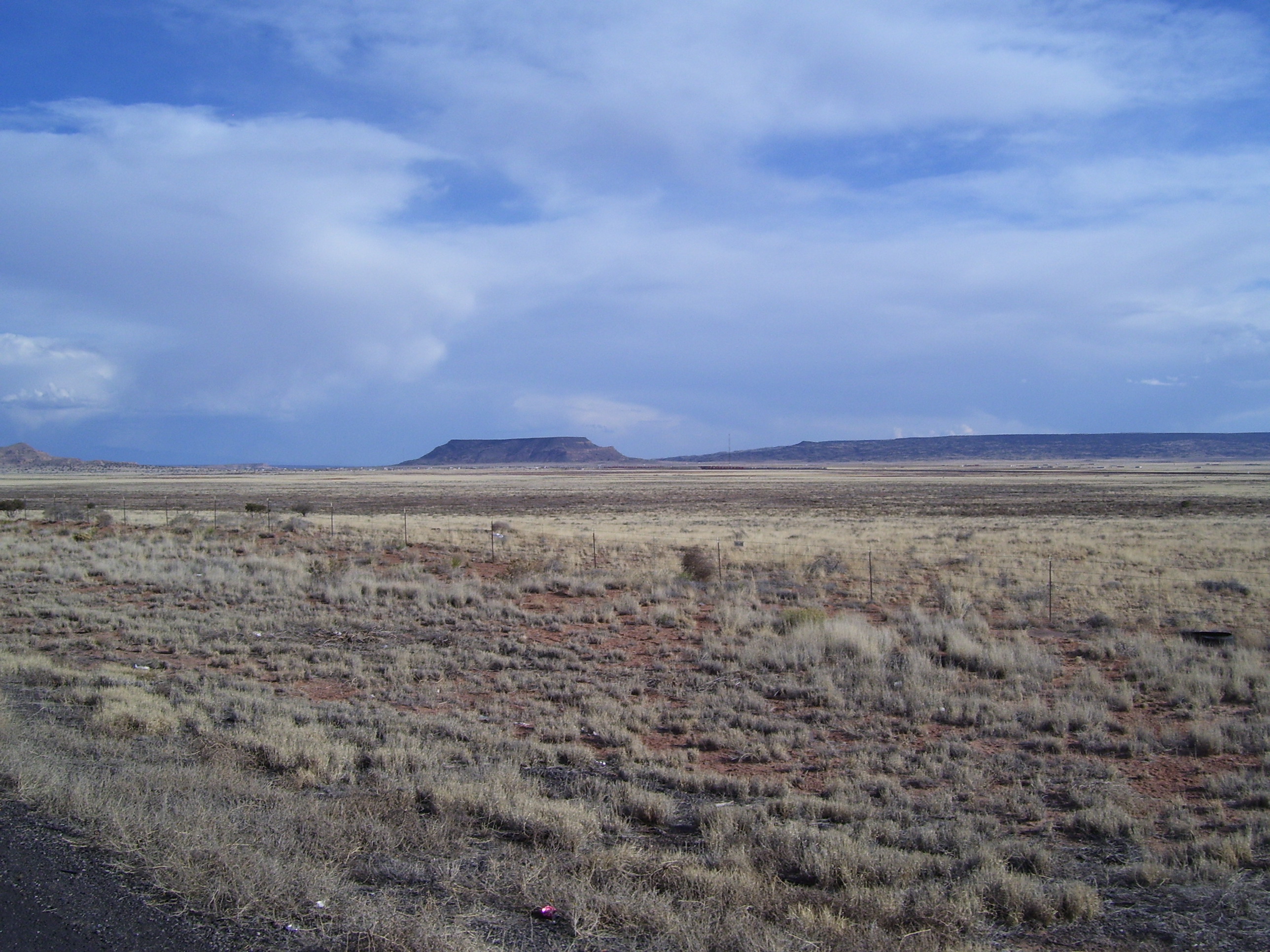 Basically, a mesa is wider than it is tall, while a butte is taller than it is wide. Otherwise they're basically the same kind of rock formation. Cool, huh? Now you can amaze your friends and family next time you're traveling through the Southwest or looking at postcards.

Anyway...here's another thing I ran into a lot today. In fact just about every time the winds blew across the freeway with any kind of strength, a tumbleweed or two would go drifting by. A couple times I had to slow down so one didn't run into my bike. (They have sharp edges to them, so don't try picking one up.) Here's one that stalled out on the shoulder as I approached. Stupid things! 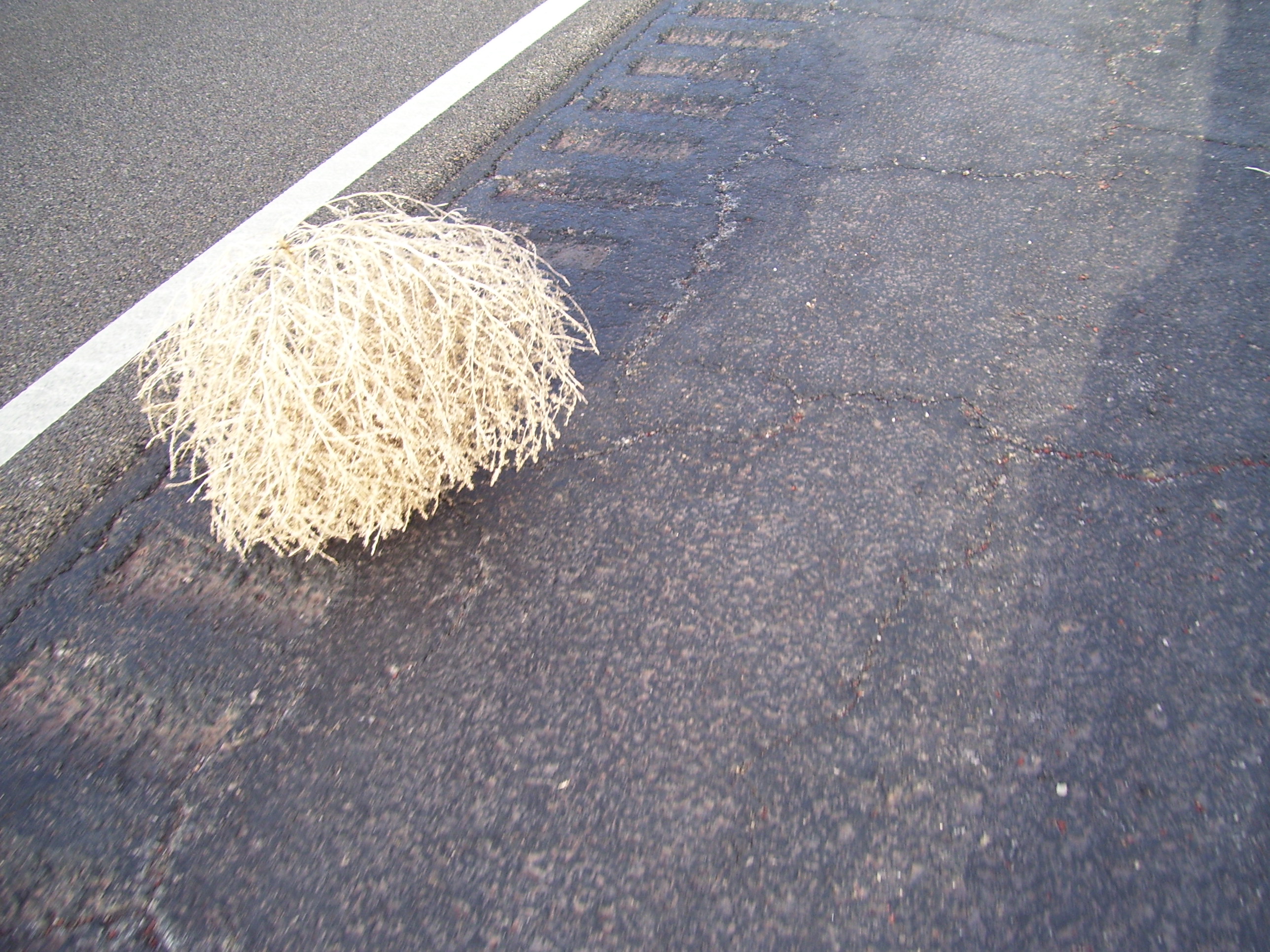 This is the Route 66 Casino, the first thing I came to that I recognized since leaving the LA area. I've been to Albuquerque once before, visiting my sister when she lived here for a few years while her then husband was stationed at Kirtland. One of the days I was in town we drove out to this casino, so I recognized it right away. I didn't go in this time, but I did find the cache in the parking lot. :) I've seen a lot of casinos this trip so far....at least one or two a day, it seems like. Anyway, reaching this point told me I was almost to Albuquerque...then I just had to suffer through that 5 mile climb. 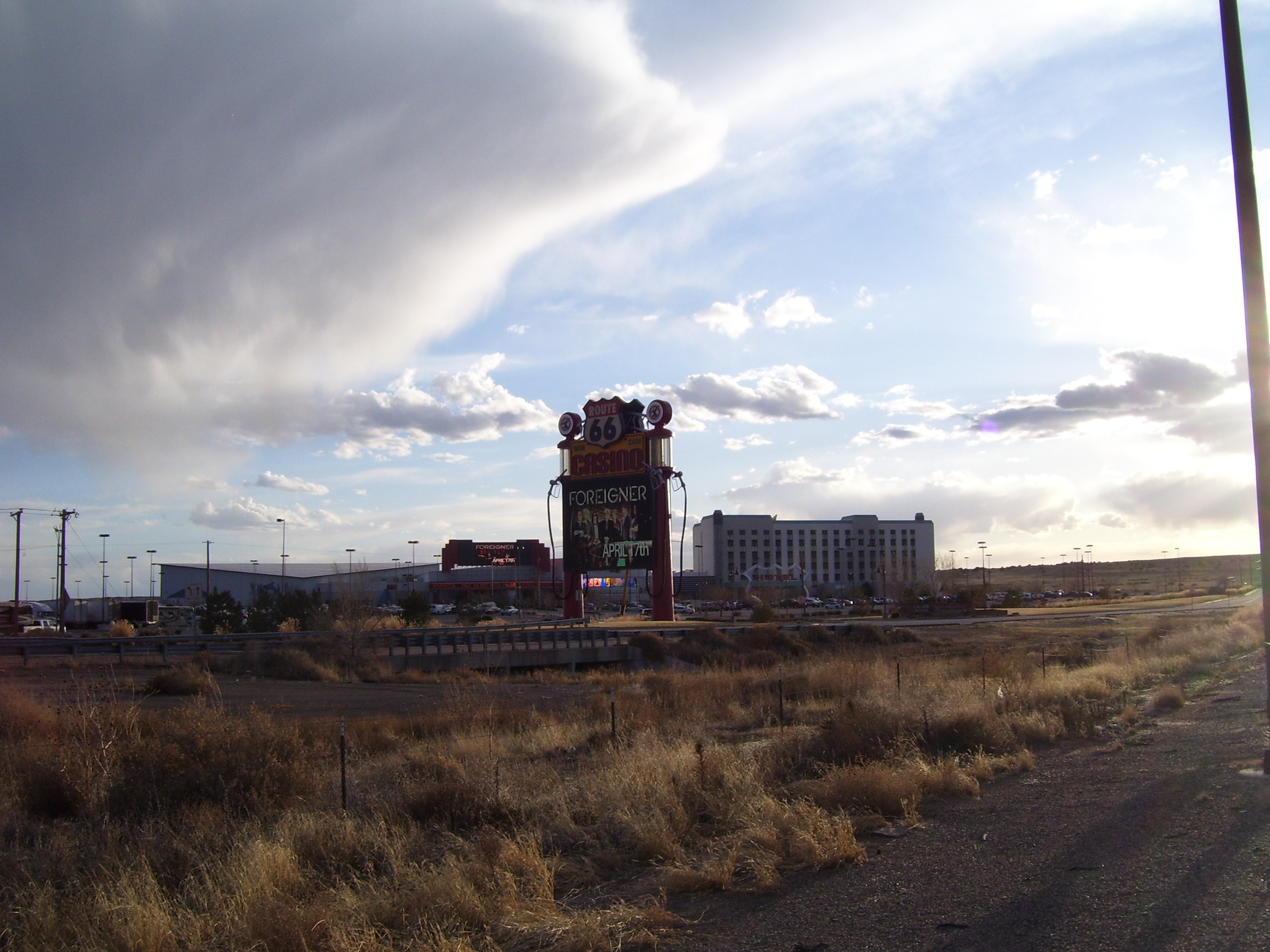 Right before that started I checked out this historic bridge. Then it was off to climb for an hour. 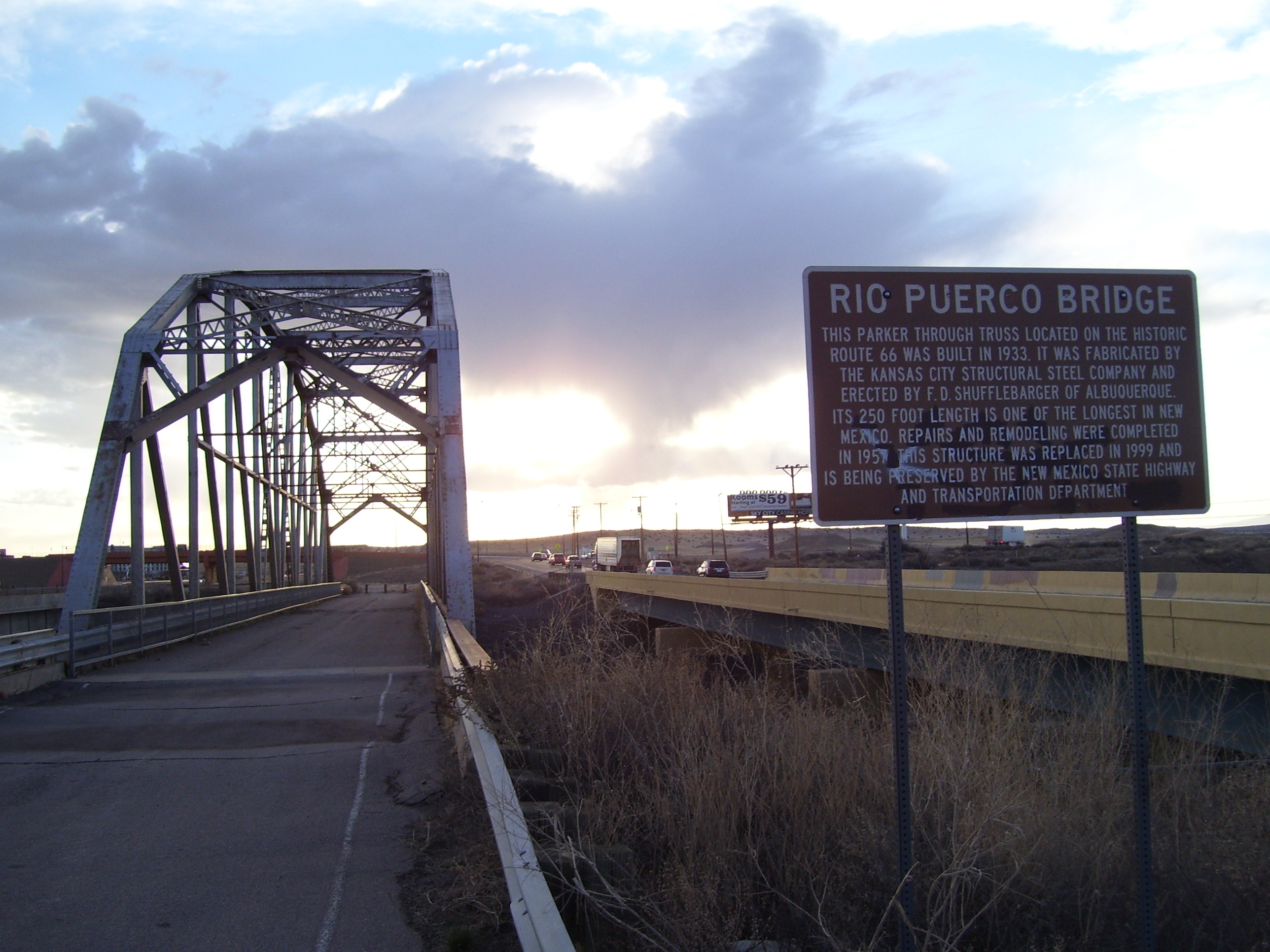 The sun set behind me as I was halfway up the hill. The casino is that speck of light off to the left of the road way in the distance. 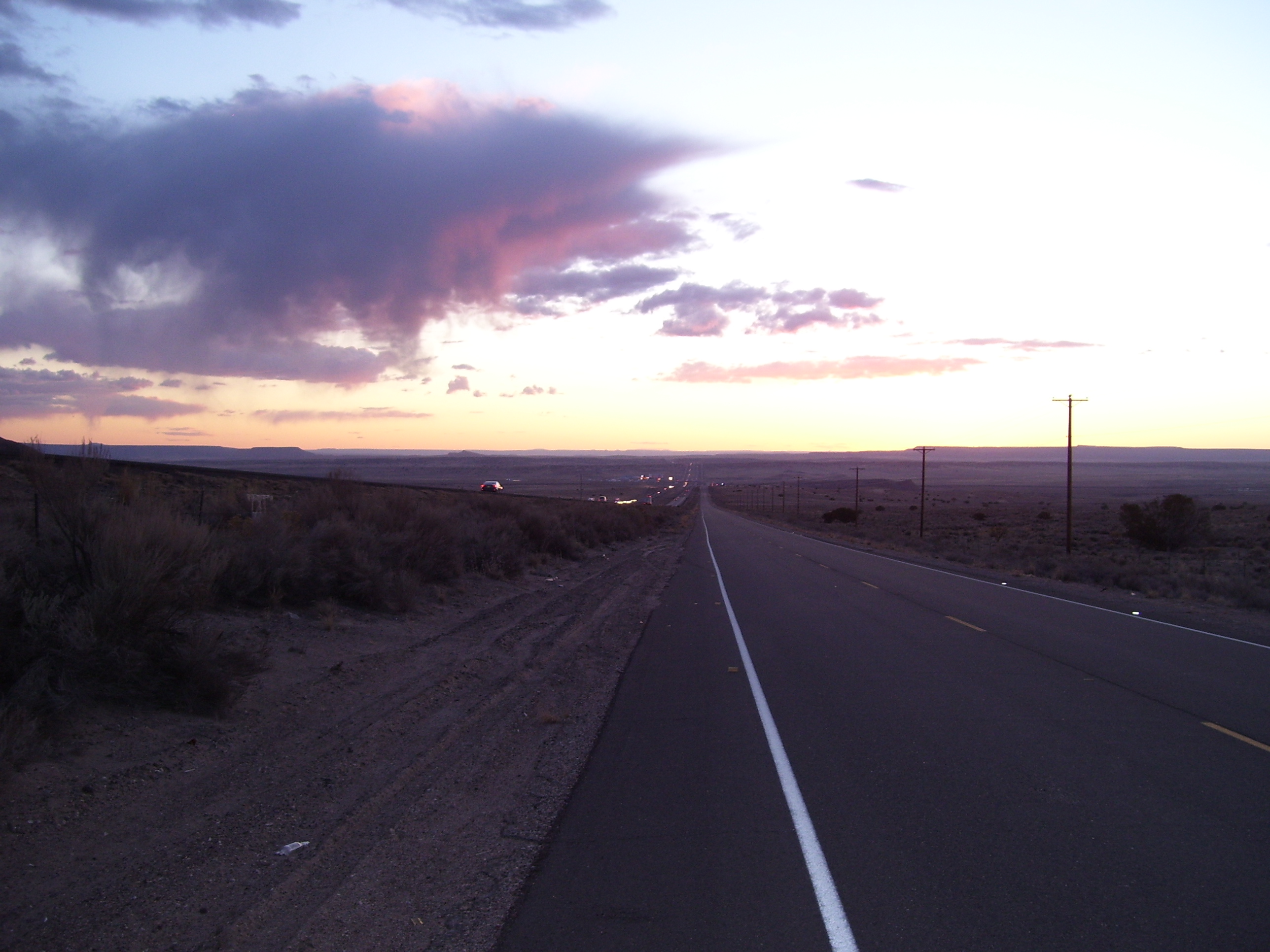 At last, Albuquerque stretched out before me, like a thousand glittering lights in the darkness... 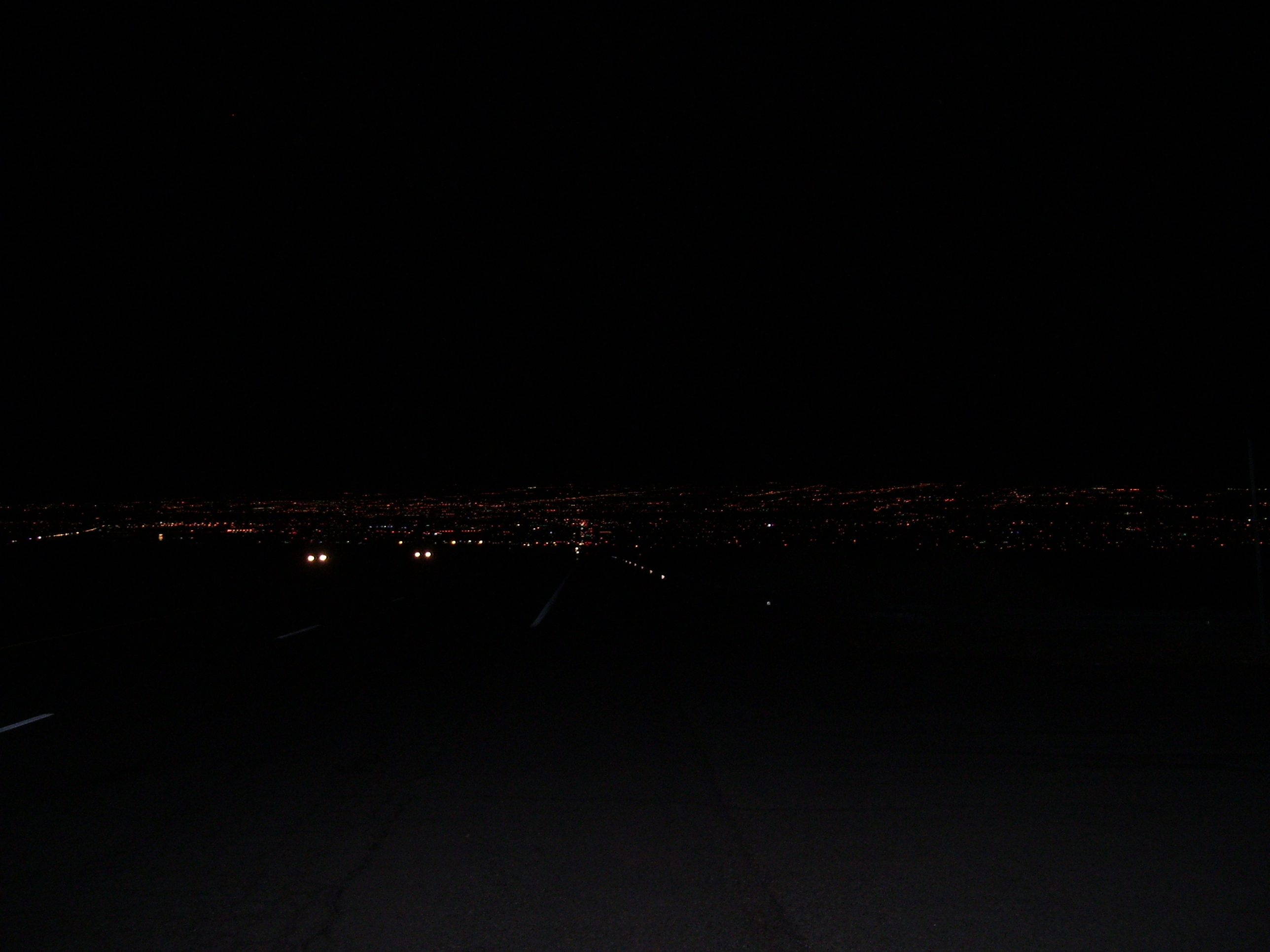 And here's the historical marker welcoming me to town. 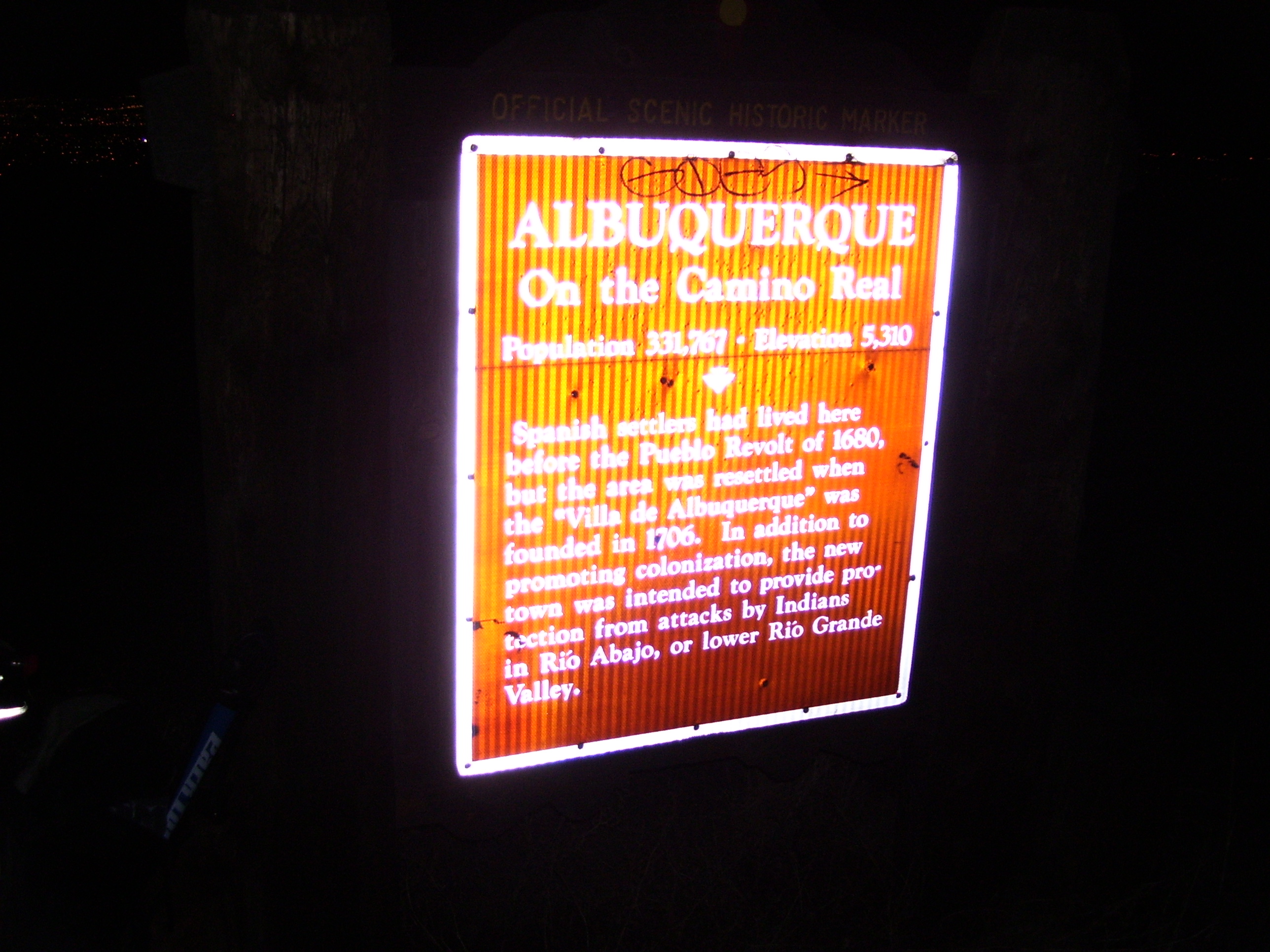 Now that I've made it here it seems that my only option tomorrow is about a 50 mile ride because the next closest hotel after that is over 120 miles away and I don't think I have it in me to do another century so soon. I'll ride around town a bit before heading out, I guess.