A day with three options: short, medium and long. The short version took me to Gallup, NM, about 16 miles across the border, with a total of just under 50 miles for the day. Medium was a single lonely hotel at the aptly named town of Continental Divide (yep, there's a town there), at 75 miles. The long version was another century that would bring me into Grants, at an ideal position to push for Albuquerque tomorrow. Unfortunately, the day called for nothing but climbing for the 75 miles it would take to get me to the medium option, and while it wasn't a lot of elevation gain, it was 75 miles of uphill slope, which wears on you after a while. So when I didn't even get to Gallup until after 2pm, I ruled out the longer option (which would seen me arriving at 9-10pm again) and instead decided to try out the Continental Divide hotel. They had exactly one room left when I called, so I reserved it and hurried on, getting there just after sunset, but not so dark that I had to get out my light. That's the first time in a while I haven't had to ride in the dark!

The day began with more freeway riding, and I stayed on I-40 pretty much all the way to the New Mexico border at which point the highway spawned a frontage road, part of what used to be Route 66. The freeway ride wasn't that bad (and I didn't get any flats this time, yay!) but it was sure nice to get away from those noisy trucks. Plus I met another cyclist who I'll talk about later, and I actually had someone to talk to for 5 or 6 miles.

The frontage road was a little hillier but not really all that much rougher, plus there was almost no traffic. My route meandered northeast and then east, and the winds crossed me up for a while until I swung easterly enough that they ceased to be a bother. After leaving Gallup the frontage road lasted another 10 miles or so before abruptly ending and forcing me back on I-40. This was all right except for a 3-mile stretch with the shoulder torn up pretty badly...it's amazing I didn't get a flat right there, but I made it through. I had to get off at an exit 7 miles short of my goal to grab dinner because there weren't any restaurants in the tiny town with the lone hotel, just a single gas station, and I really don't like eating gas station food very much. I settled for a meatball sub at Subway, along with a couple 20-ounce sodas, and raced the sun to exit 47. The hotel only cost $25, cash only, but it's really quite nice...and it has working internet, which is more than some other hotels I've stayed in lately can say.

Now for the day's photos. First off is a stretch of I-40 where it looks like the overpass juts right out of the rocks to either side. 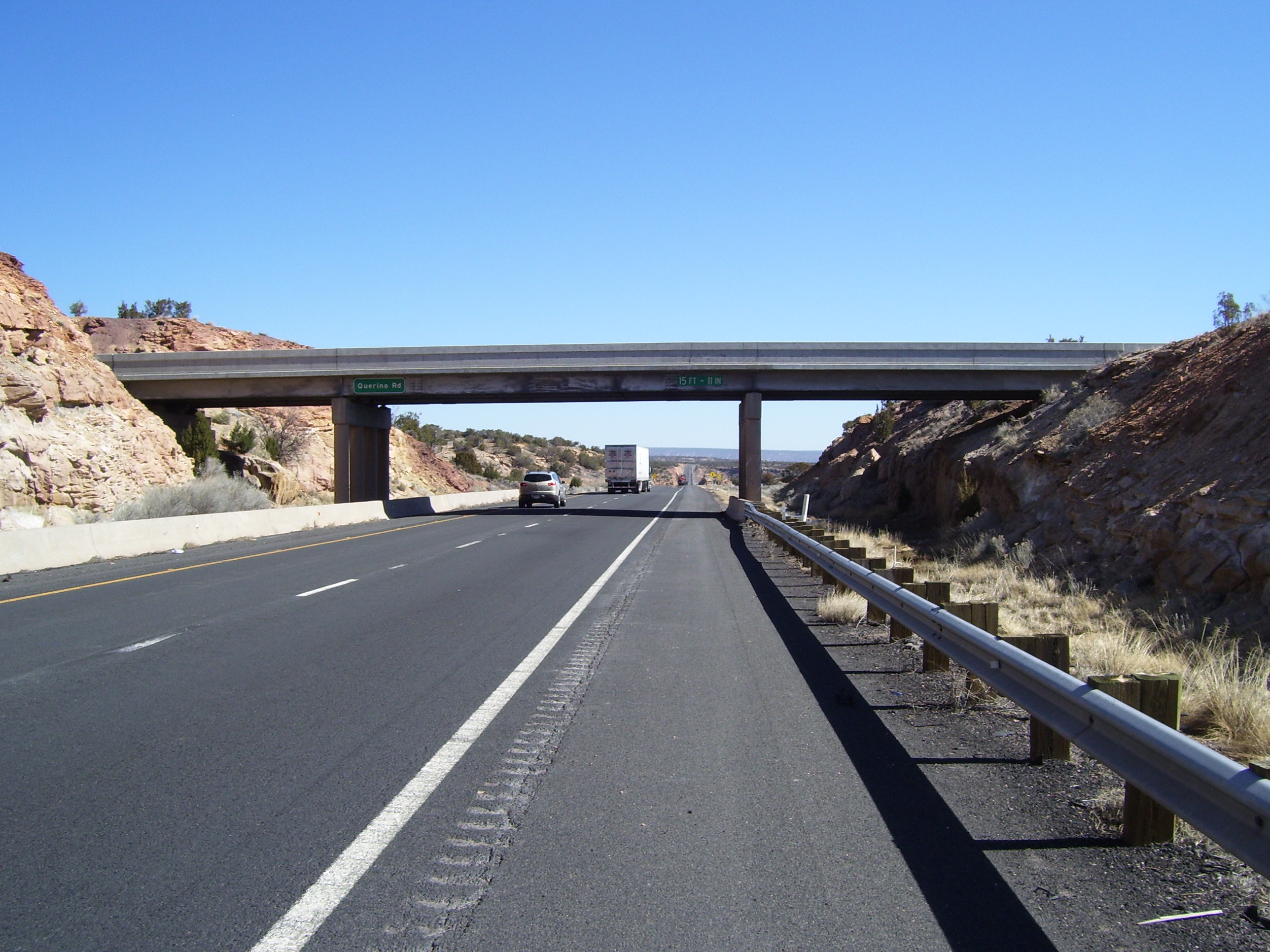 Riding along I came to this pretty cool looking place called Fort Courage, about 15 miles from my starting point, where I thought to maybe take a break and check it out...but sadly it's closed forever. Too bad. 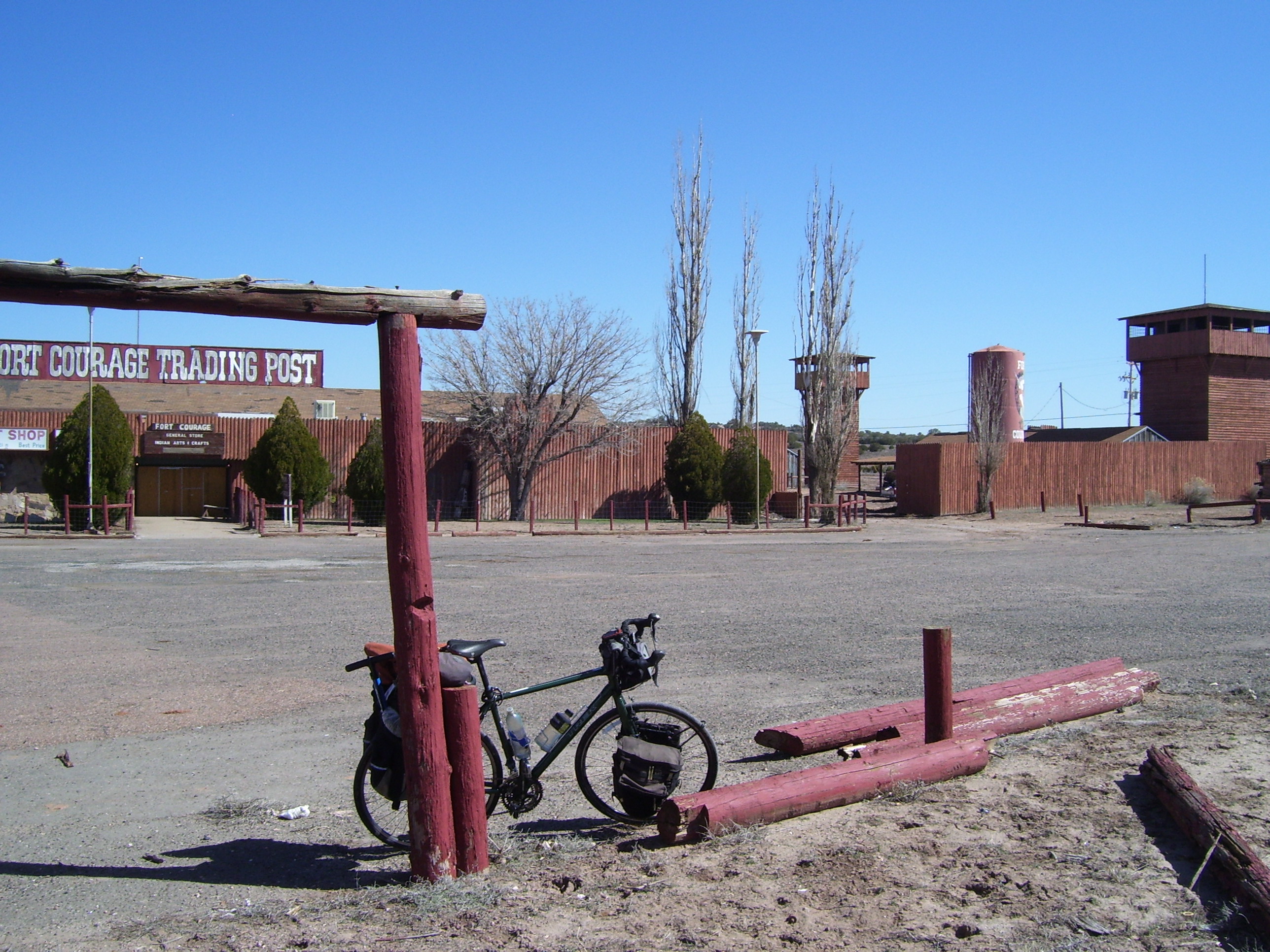 The terrain wasn't all that interesting right away, but the closer I got to New Mexico, the better it looked. Here's an early view of what I soon discovered was called the Painted Cliffs: 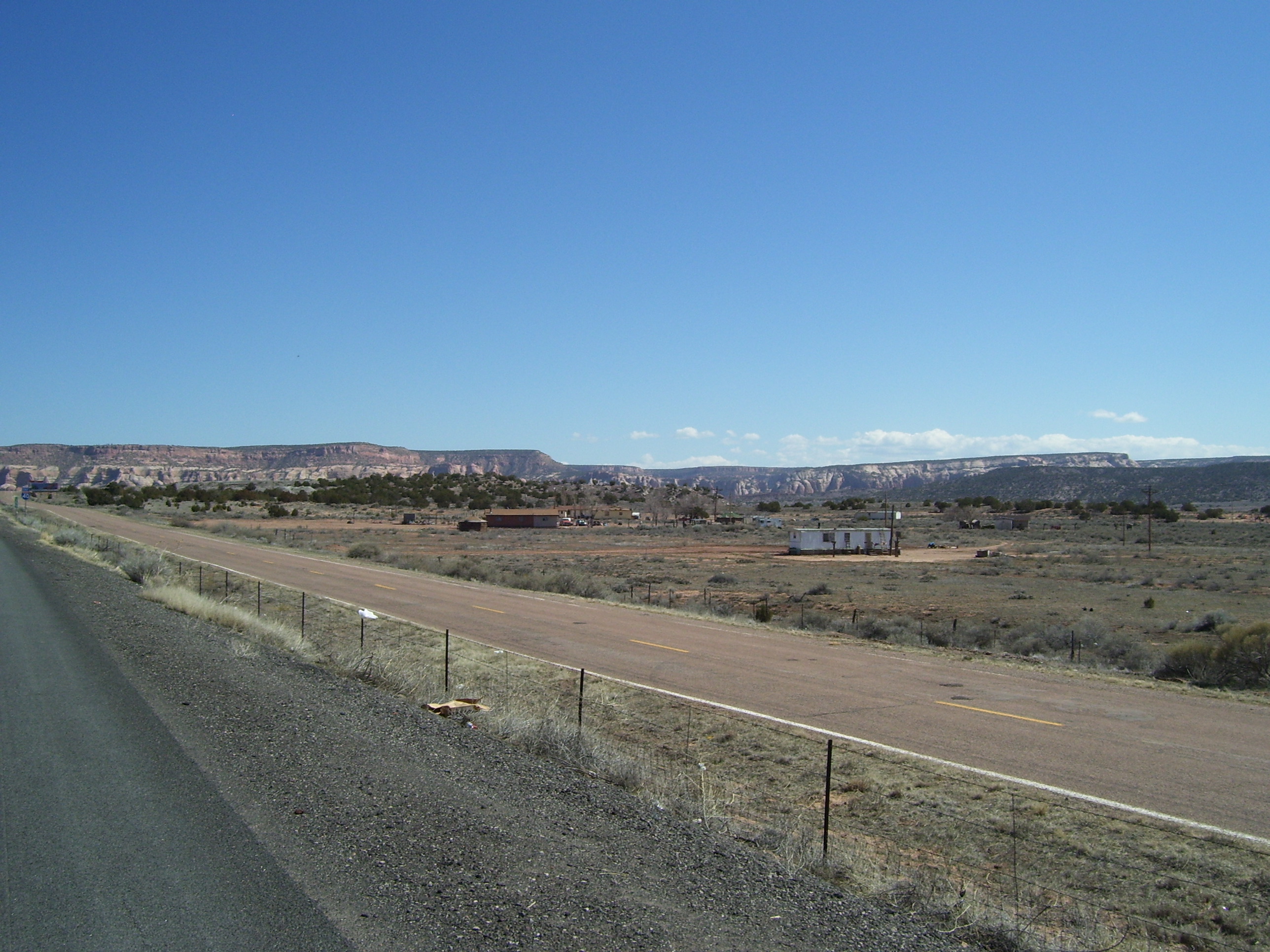 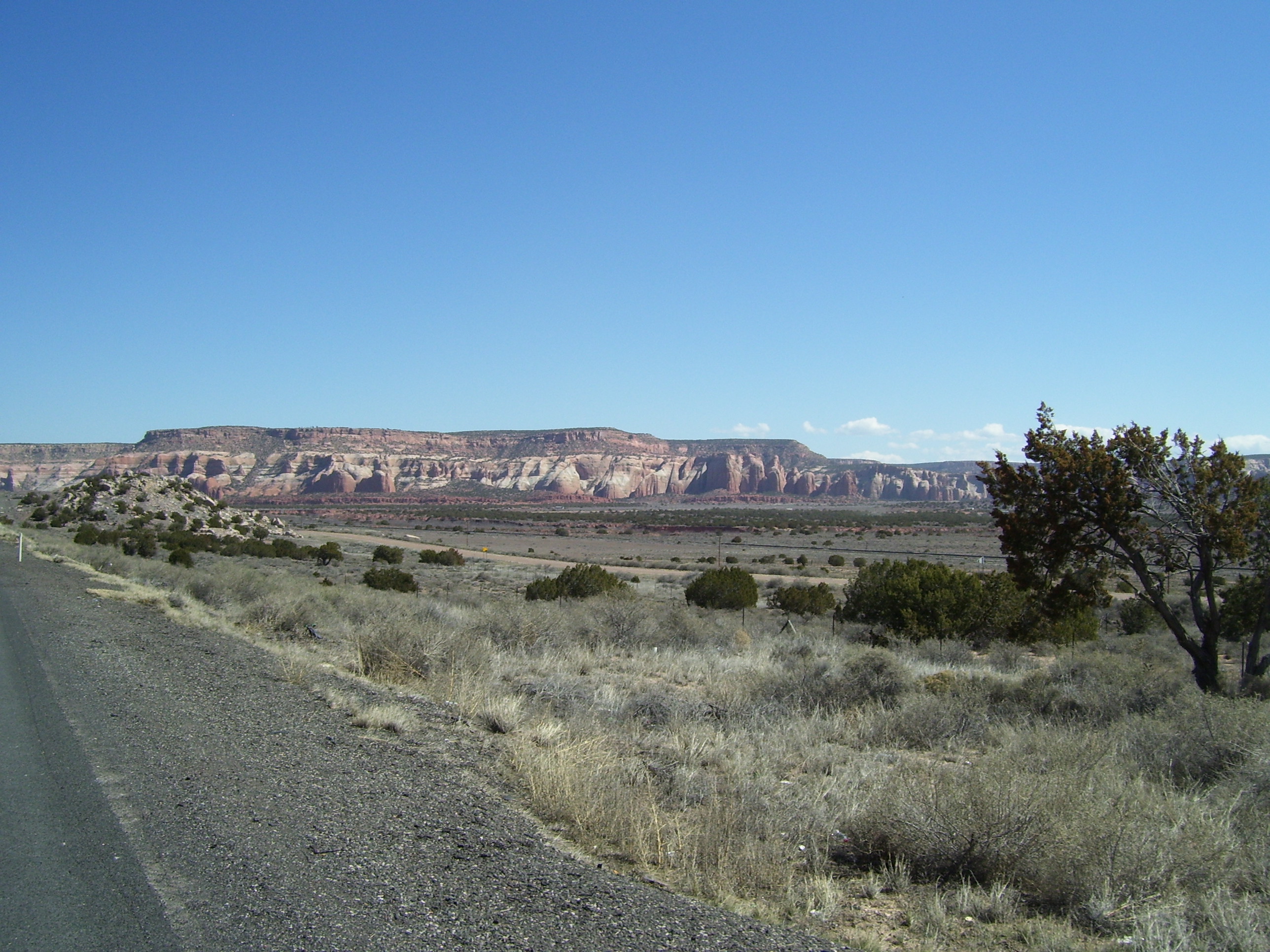 Even better view. I took all these pictures while riding my bike on the freeway, incidentally. 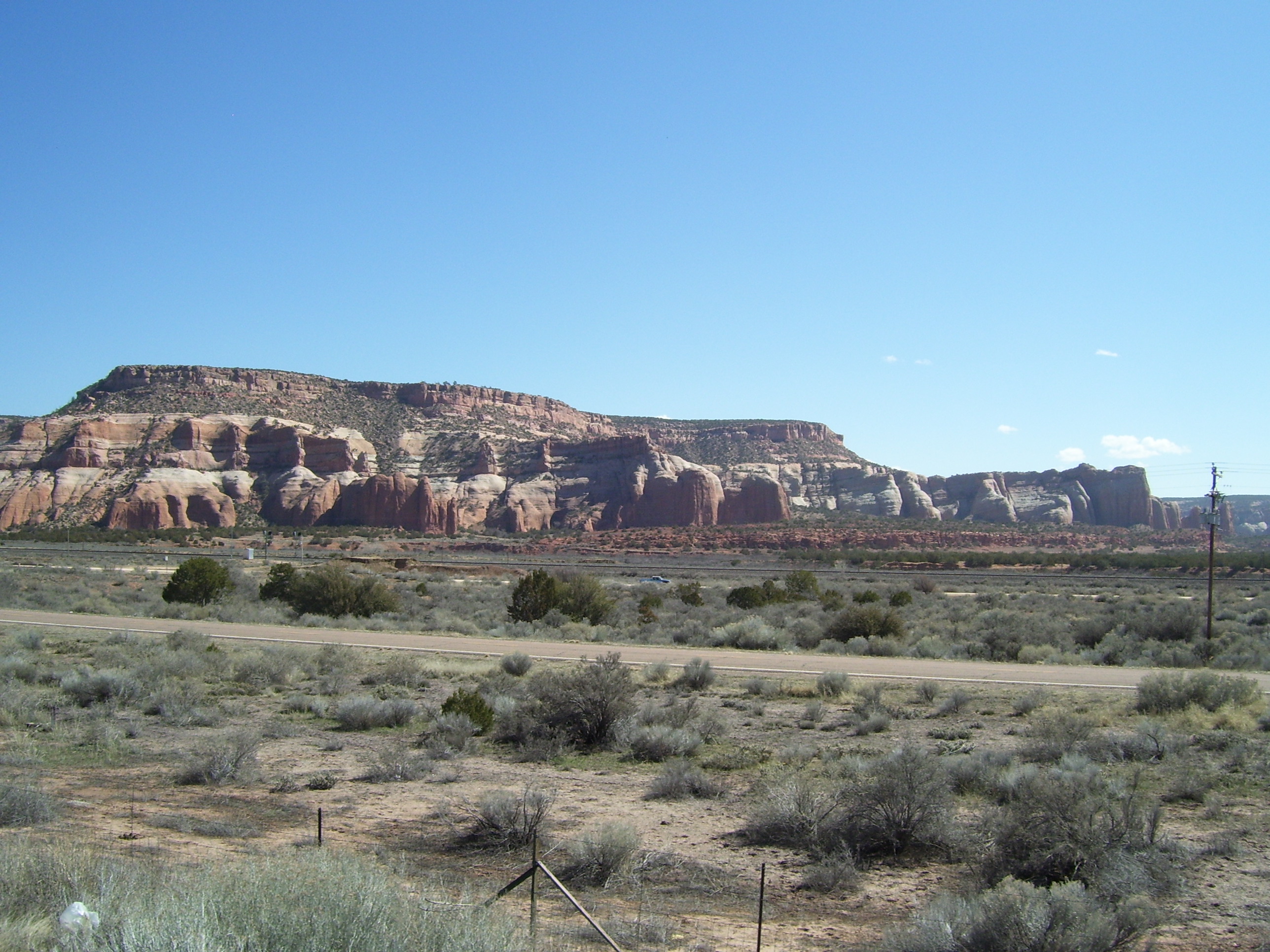 Coming up on the border, the rock formations got even more interesting: 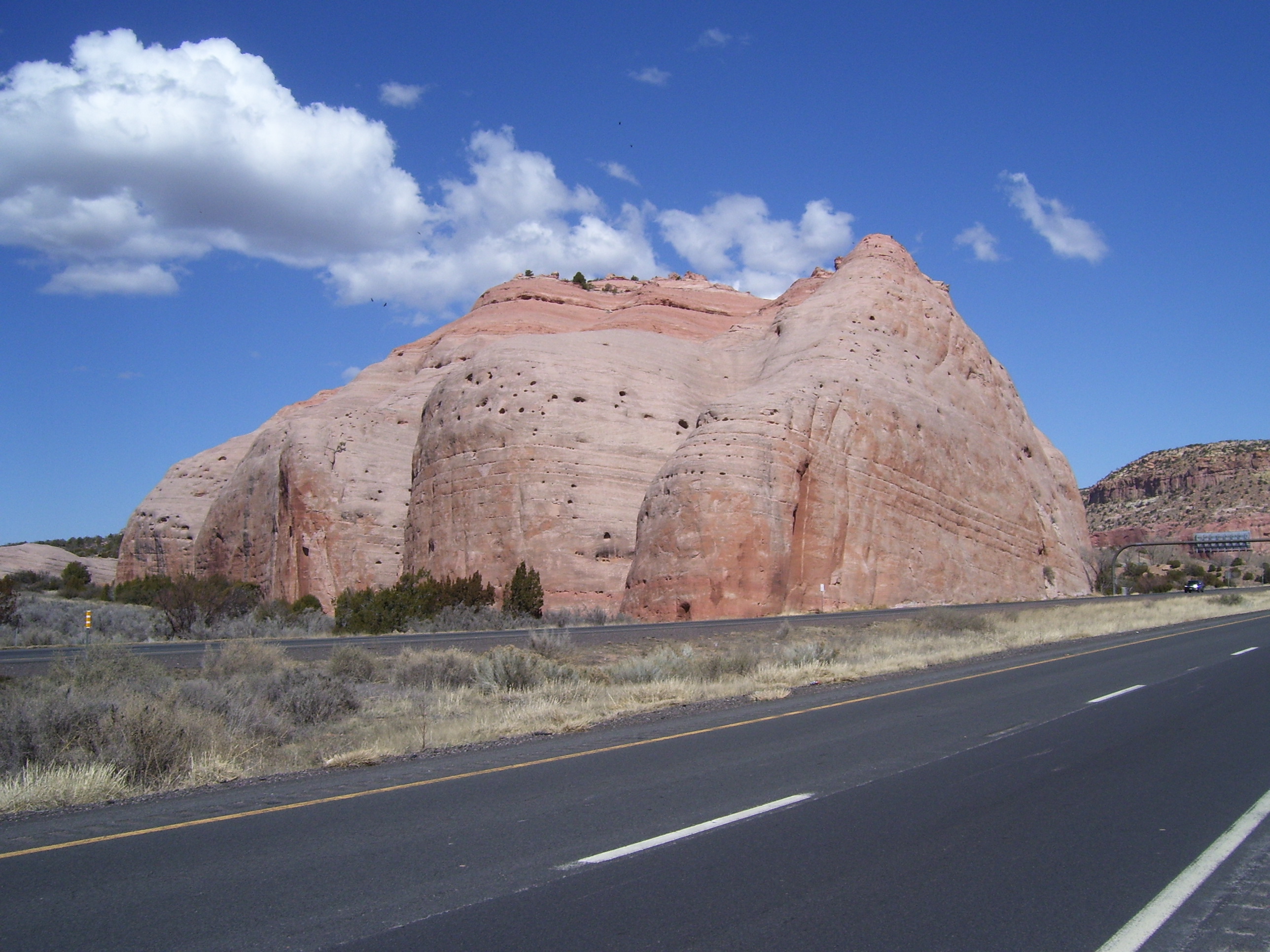 This one just towered overhead right at the exit with the Arizona welcome center (westbound). I refilled my water there since they didn't have an eastbound version, but an easy trip via underpass brought me right to it. Plus this is where I got onto the frontage road. 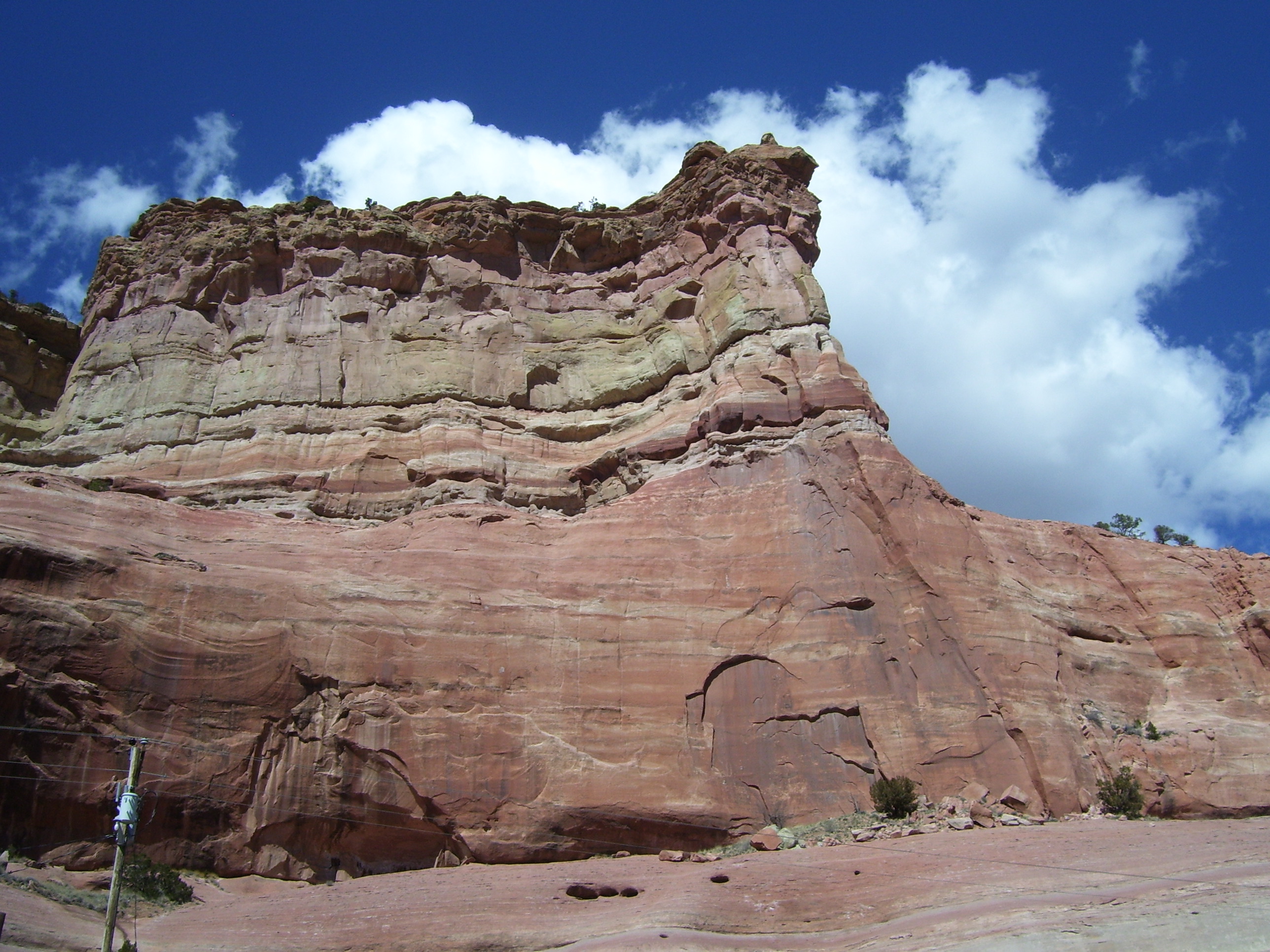 Shortly after that I reached a new state! 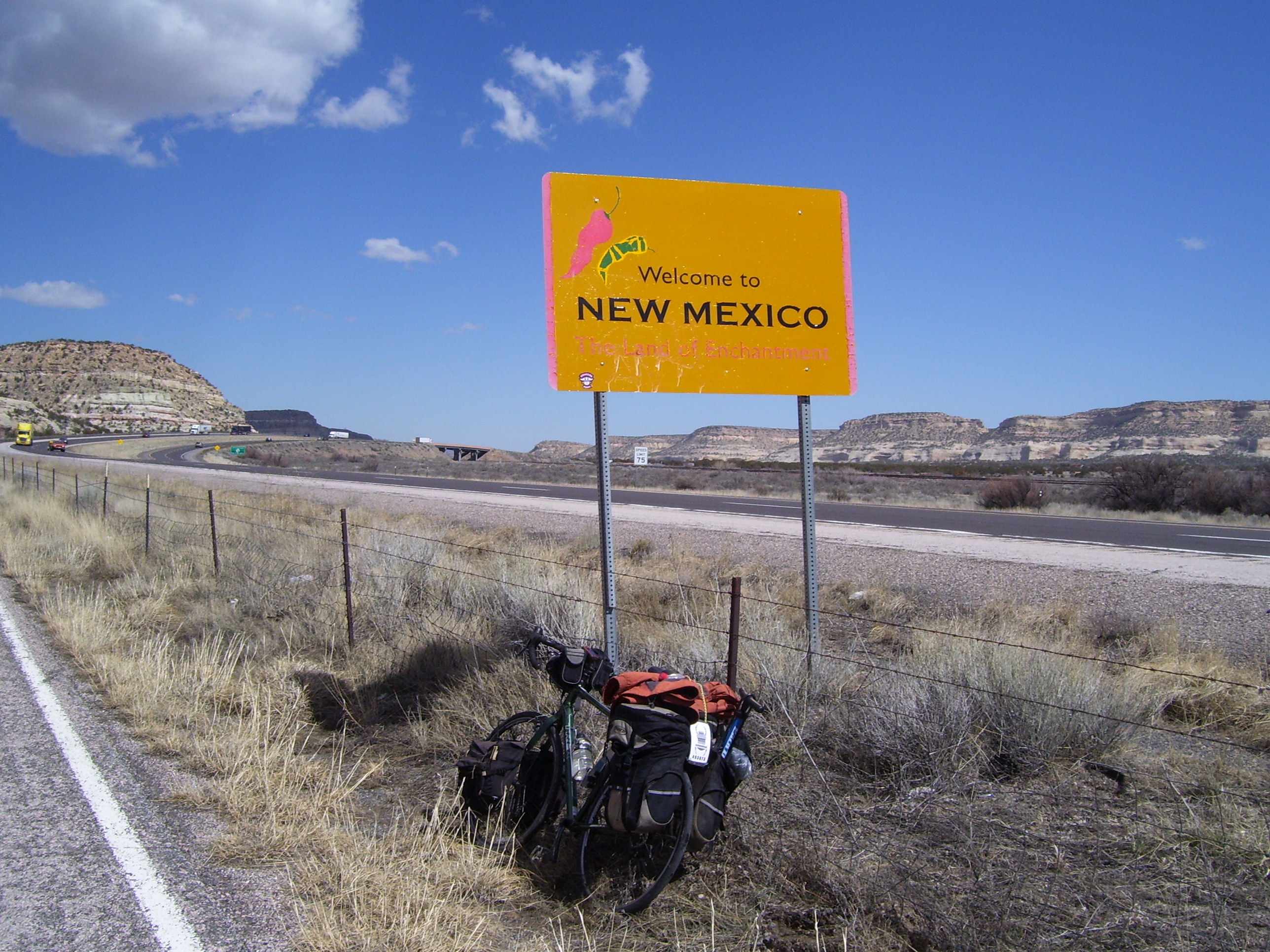 A couple minutes later I encountered a fellow cyclist named Mike, a truck driver from Canton, Ohio. To keep fit while driving a truck, he brought along a folding bike and carried it with him in the cab. During breaks he'll go out and ride along nearby roads, which sounds like a great plan to me! In this picture we're both mutually taking selfies while riding. 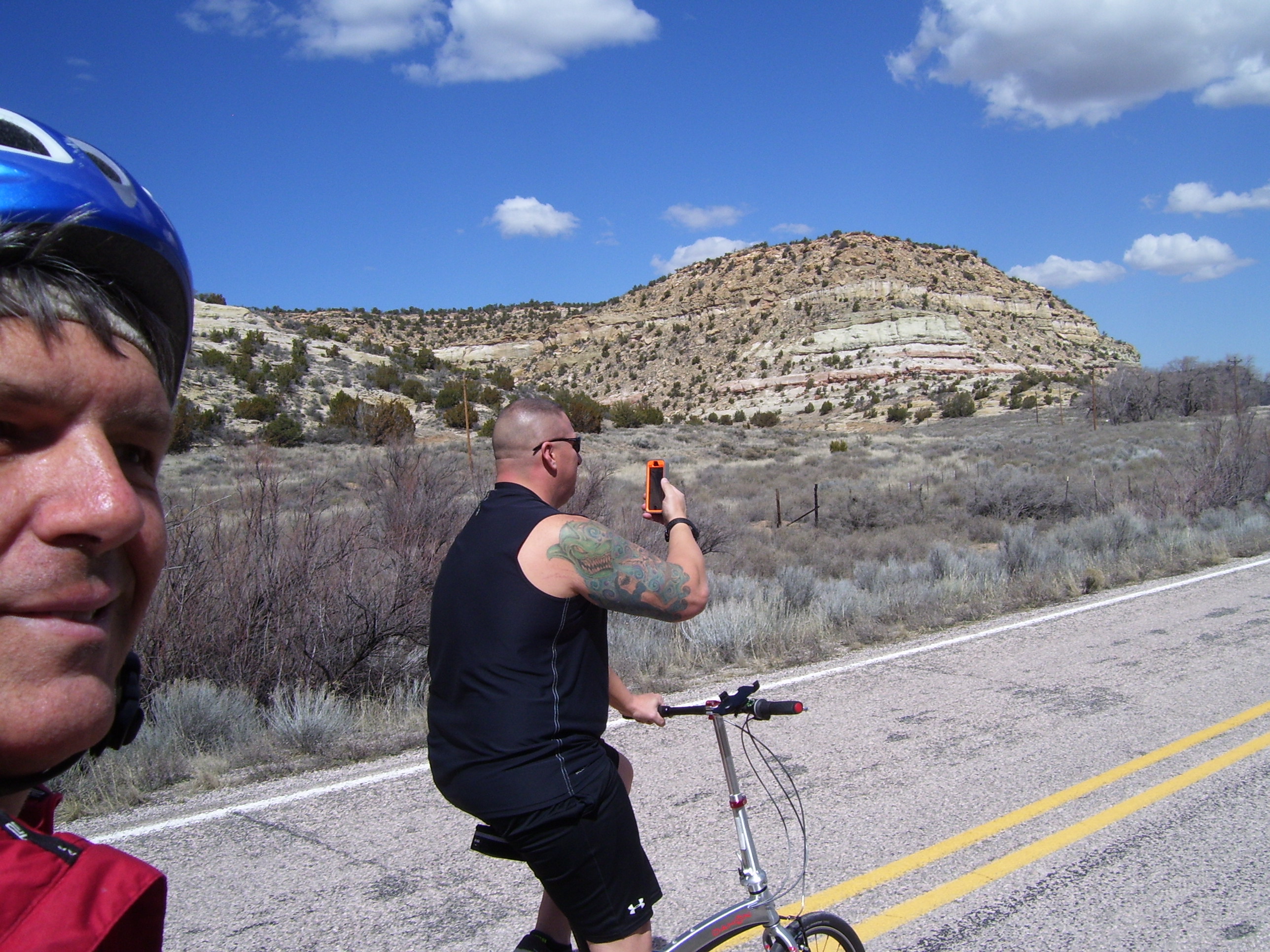 Here's a better picture that shows off the folding bike. I recently got one of these as well (a different brand) and it's great for taking on airplanes or cruise ships, as well as in your truck. 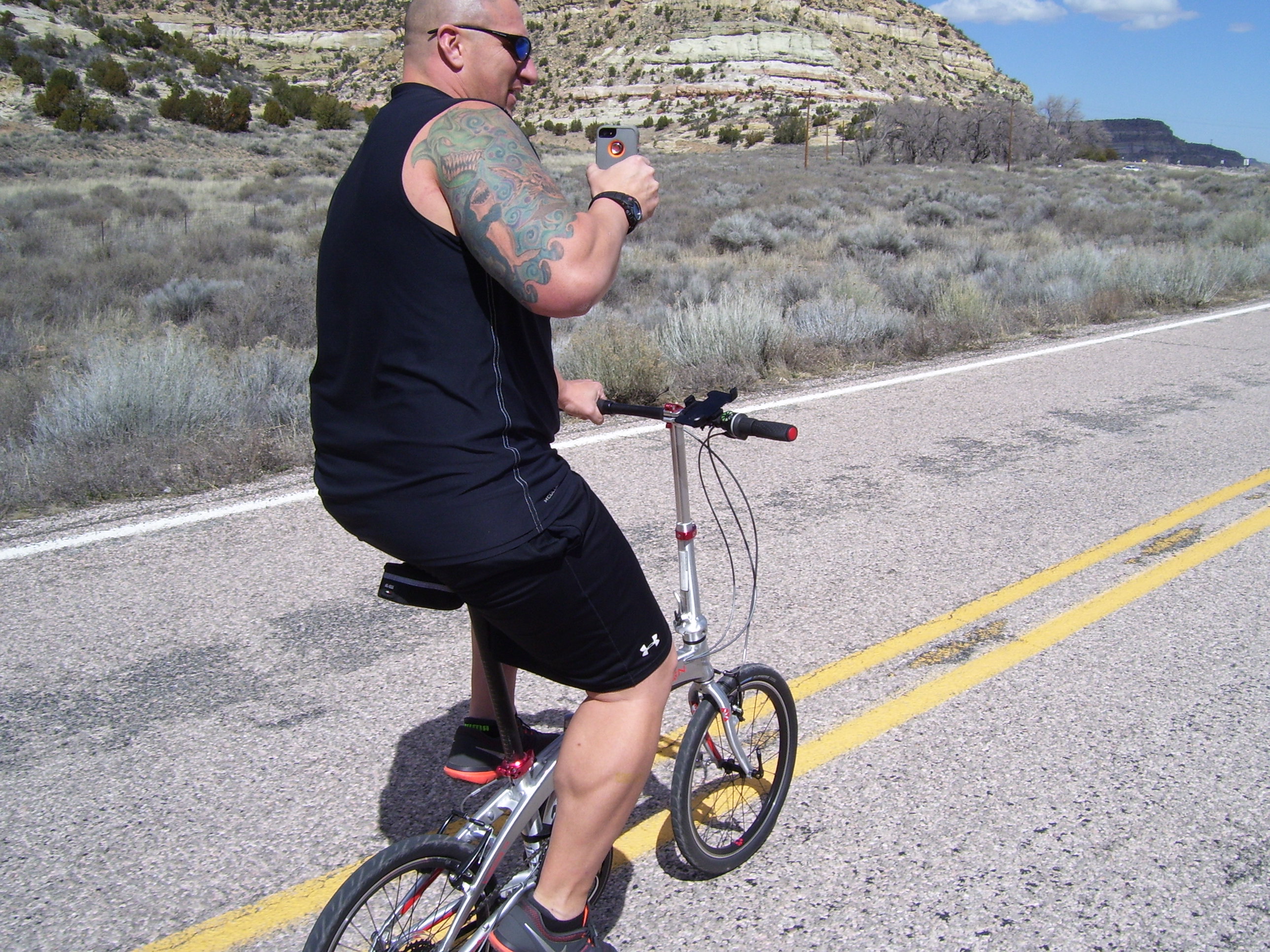 Mike rode along with me for 5 or 6 miles and we swapped cycling stories and mutually agreed that we were both glad we weren't in frozen Ohio right now. He eventually had to turn around, but it sure was nice having someone to chat with for a while, especially with the road so empty (I think only 3 or 4 cars passed us the entire time). He took a photo with his phone and emailed it to me later, and here it is: 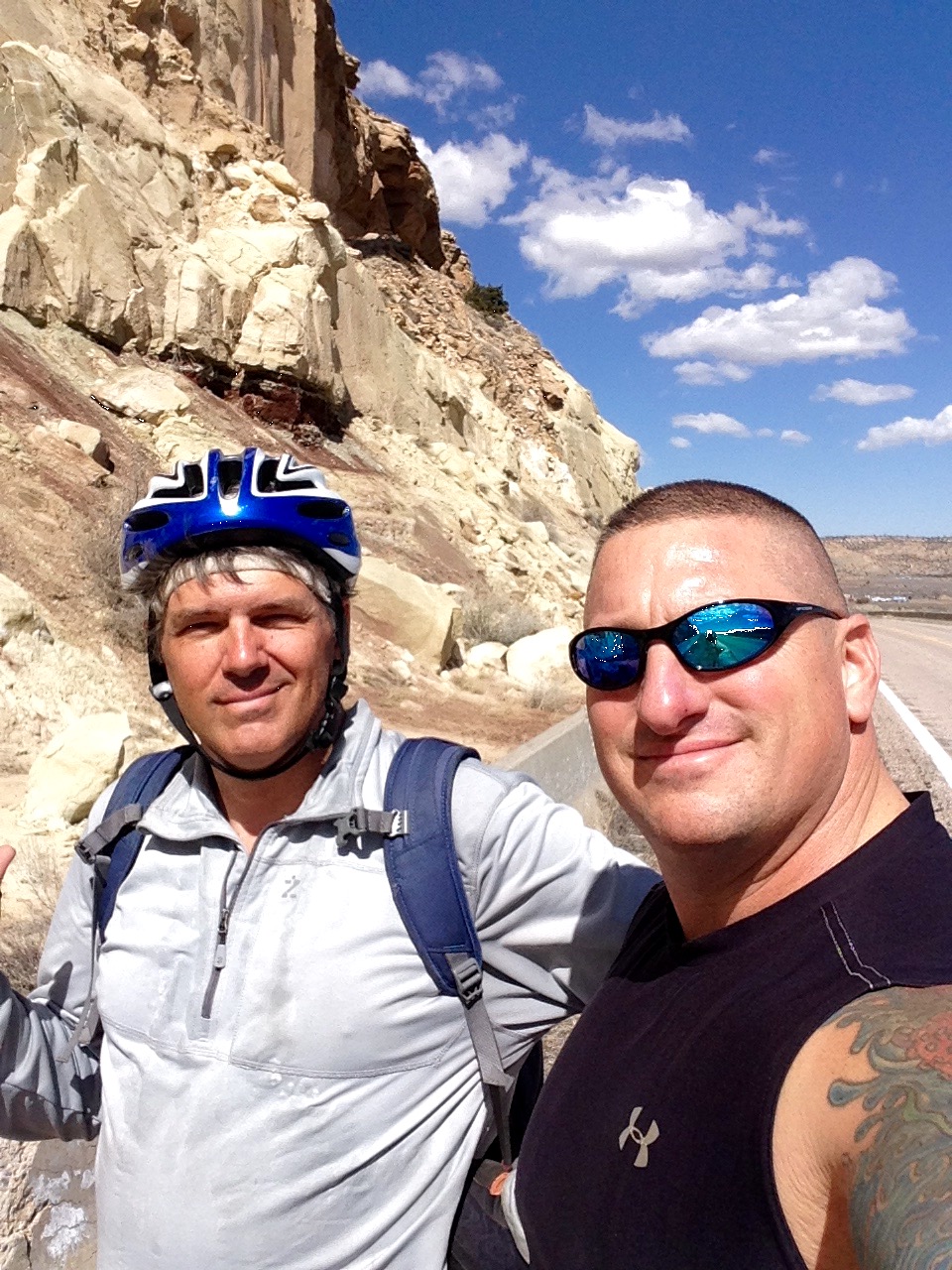 After that I had to ride on alone...but at least I had music today, having replaced the earbuds that finally gave out (those things never last...the cords eventually pull out of the jack, no matter how careful I am to avoid tugging on them). Continuing on the frontage road I eventually crossed over a railroad track, and here are two photos from the overpass, the first one looking west and the second east. 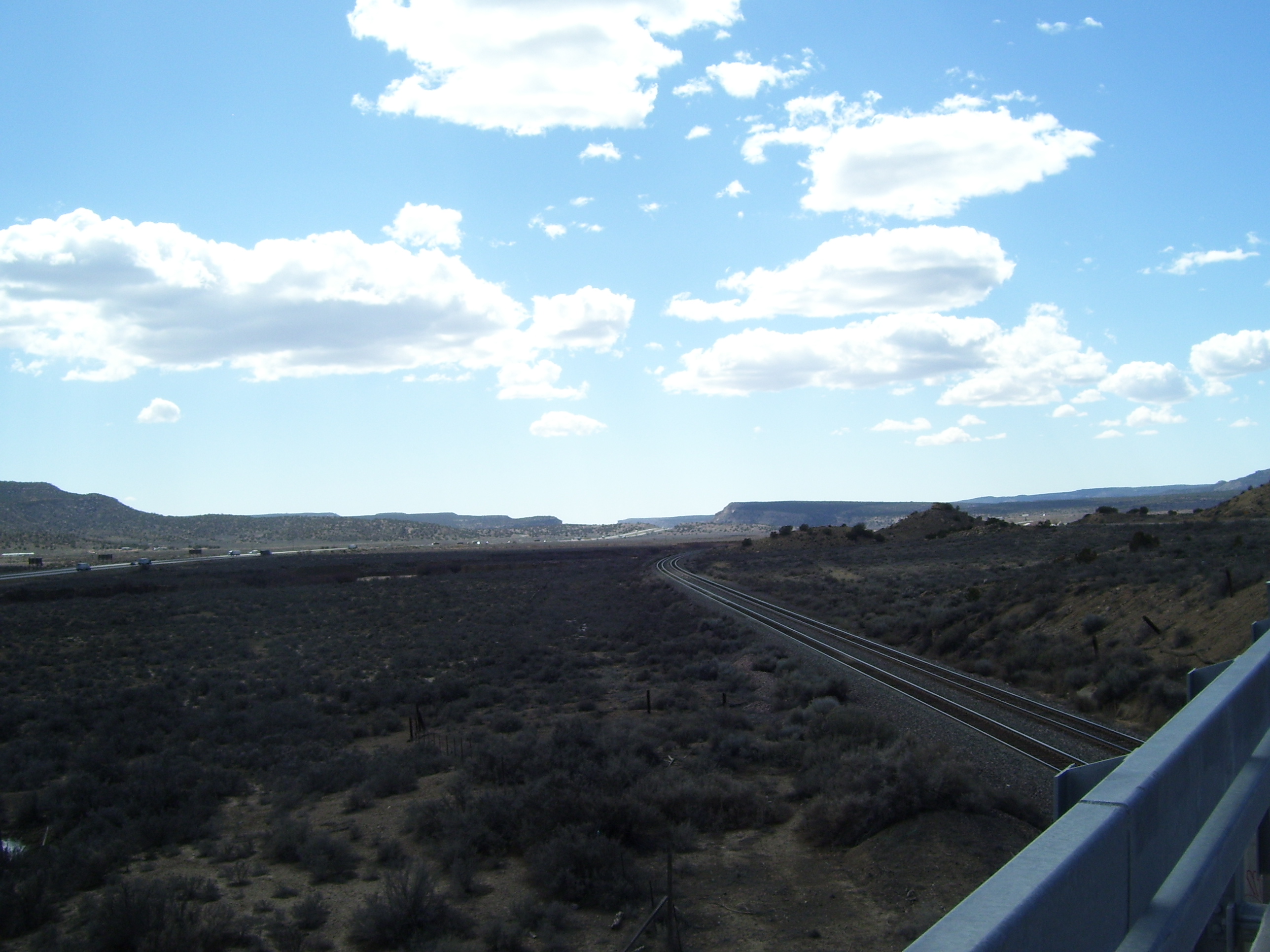 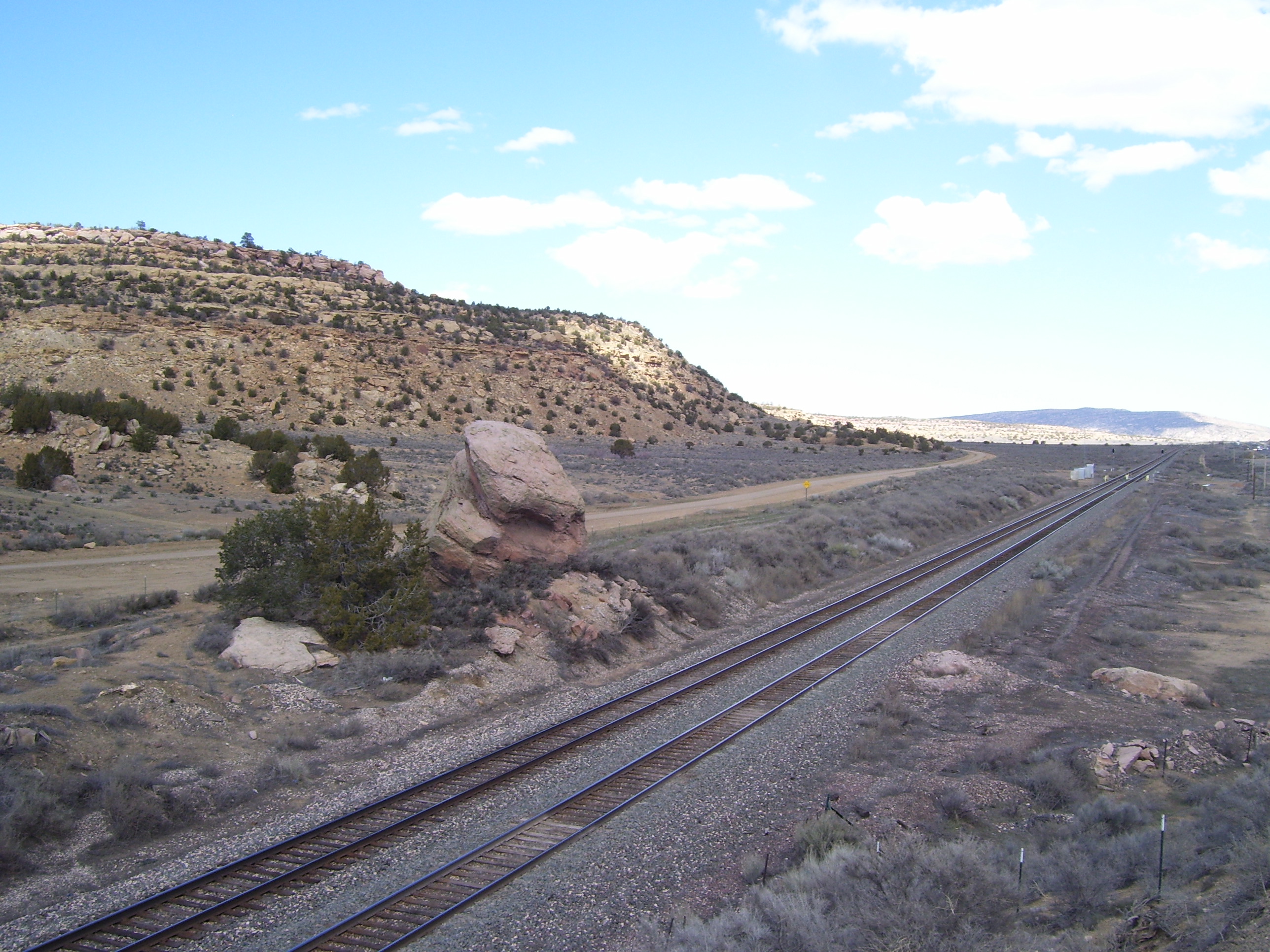 As I mentioned before the road was what used to be part of Route 66, which means all along it you can spot old ruined buildings of places that failed once the interstate went in. Here's an example...no way to tell what this place even was. 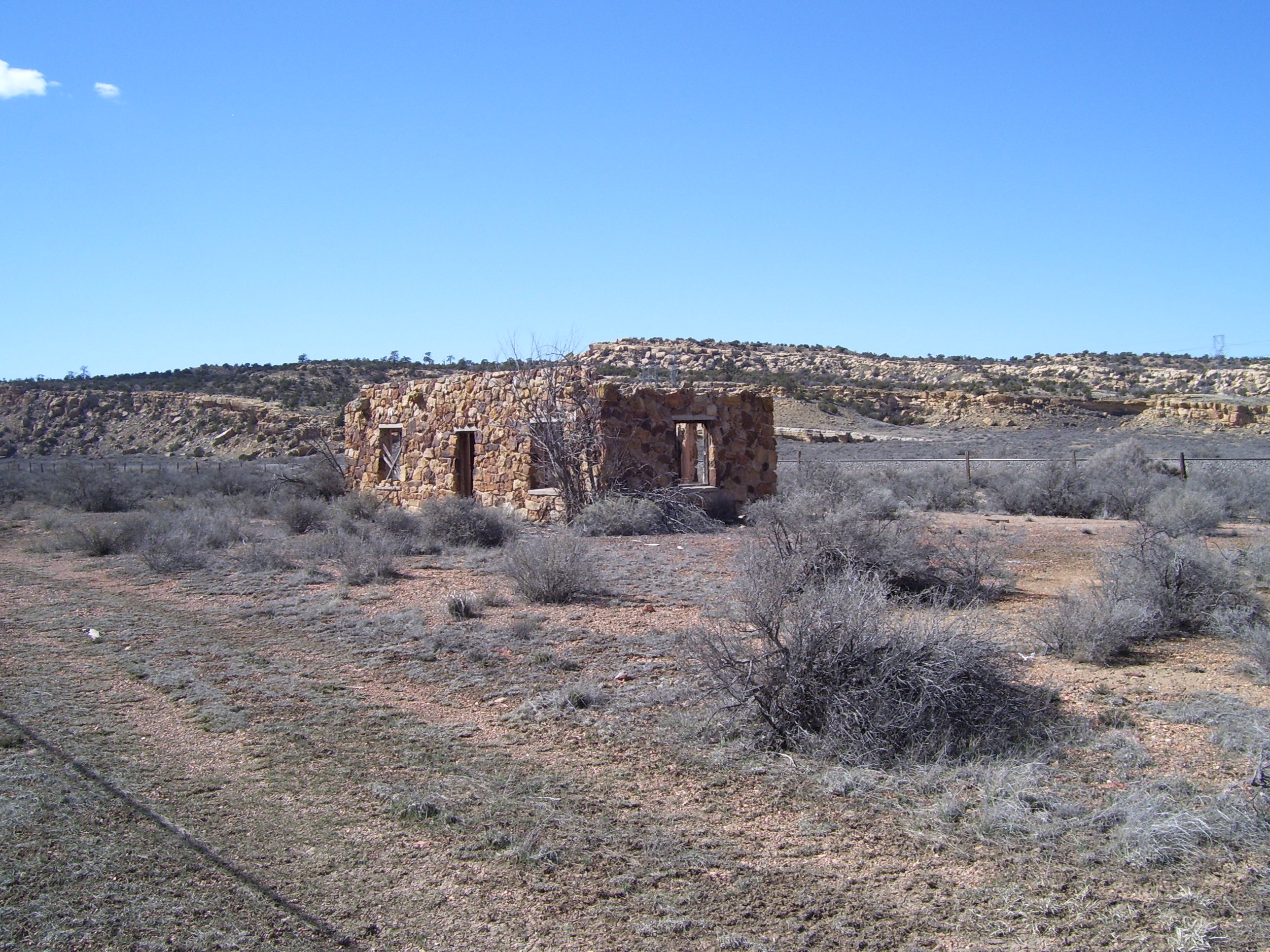 More scenery from the ride, later in the day now. The railroad tracks paralleled me all day, and quite often trains would go by in one direction or the other. 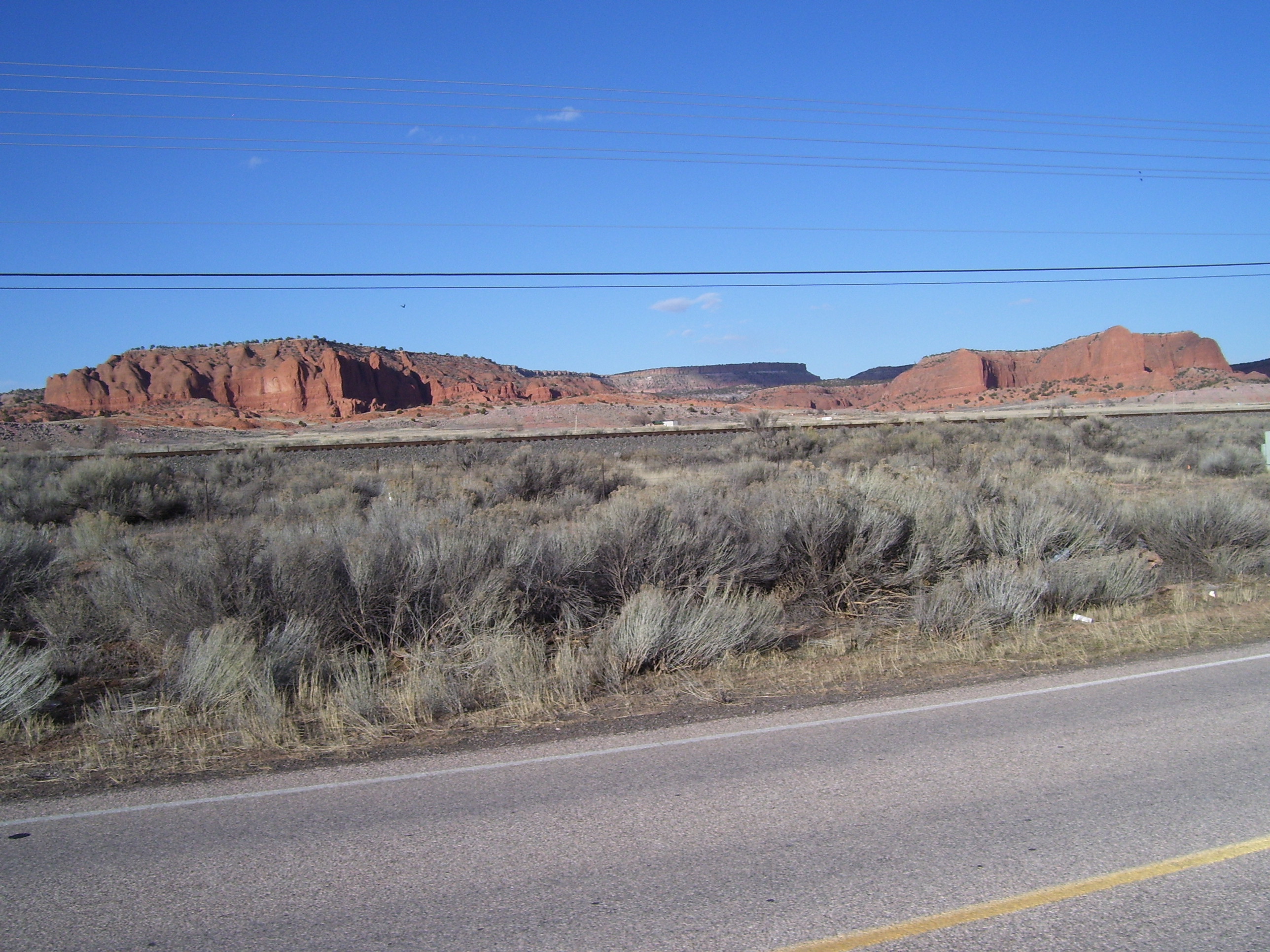 Another shot of the gorgeous horizon, taken from on top of the overpass just before I had to get back on I-40 near the end of the day, about 12 miles from my destination. 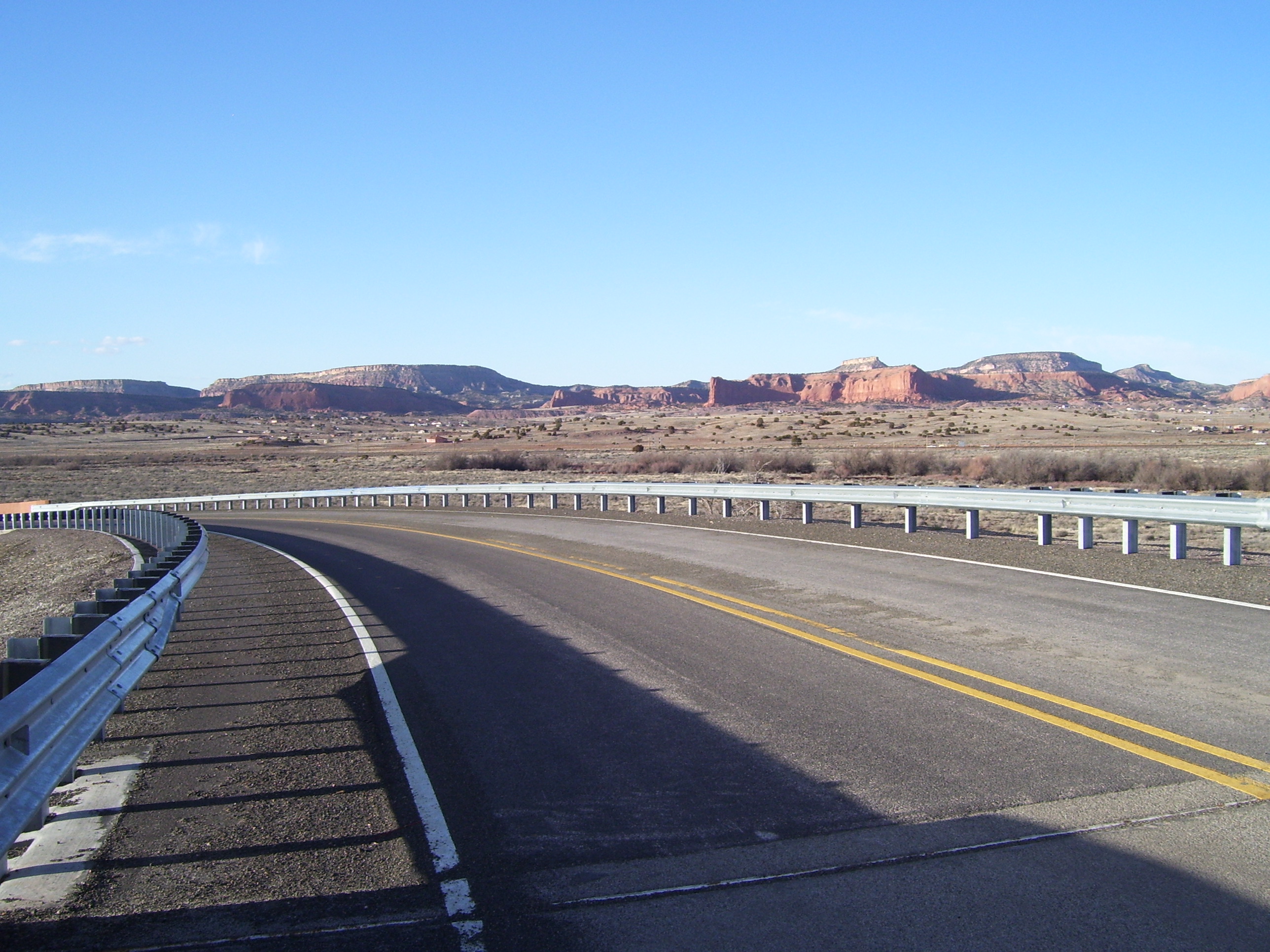 And here's a final shot with the sun setting behind me, no more than a few miles from my exit now. By the time I reached it, the sun was completely down but I could just barely see the ground enough to safely navigate to the hotel. 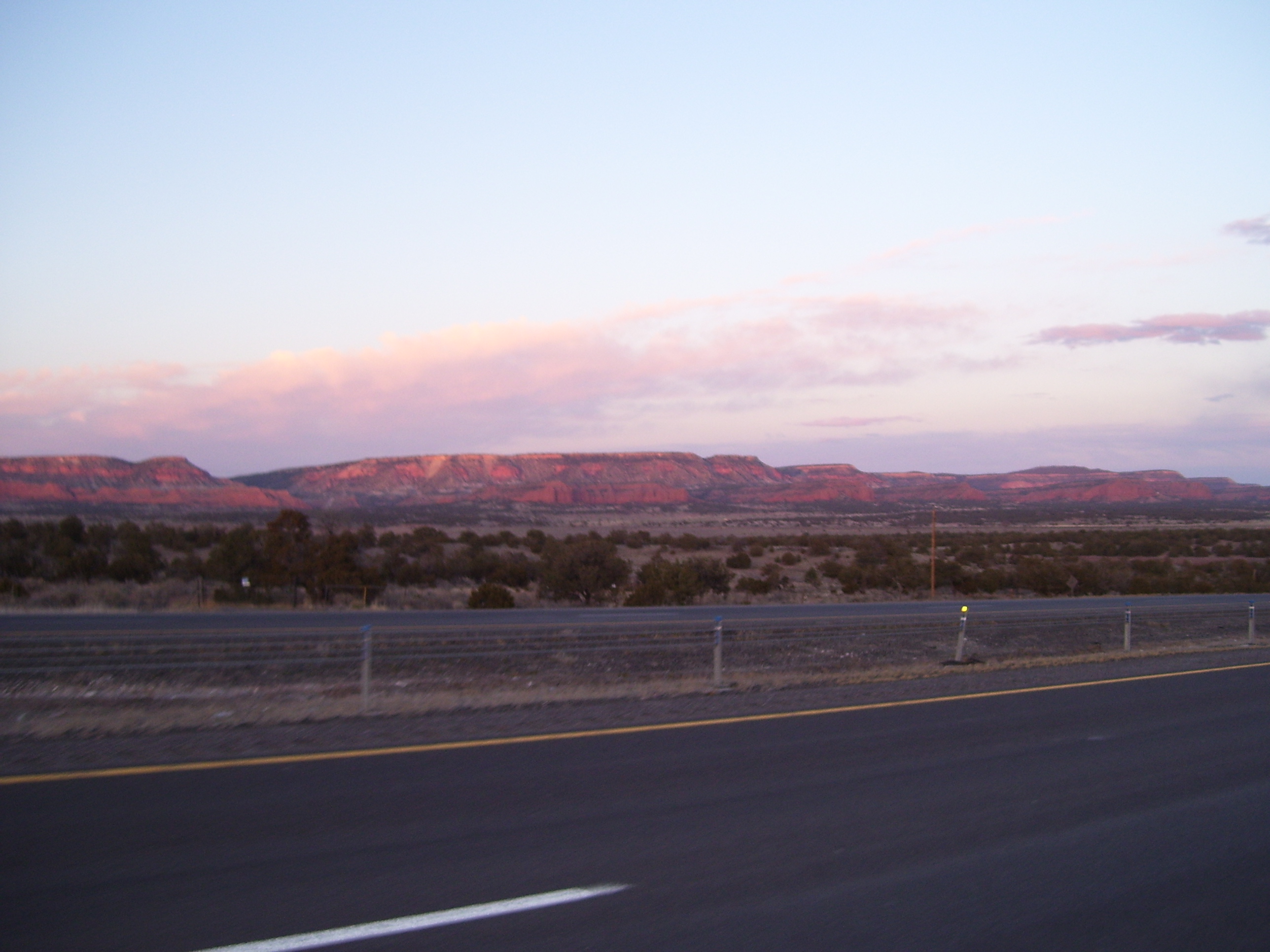 Even though I'm in the town of Continental Divide, the actual divide is about 1/4th mile east of me, so technically I haven't quite reached it yet. That'll be one of my first pictures tomorrow, I'm sure.