During my west coast trip I had a day I described as two totally different rides, because midway through, everything changed all at once--the terrain, wind, everything. Well, that's sort of what today was like. The first half, on the way from Heber to Holbrook (on the map, Holbrook is the point where the day's travel intersects I-40), was generally downhill, on a two-lane road with no shoulder, chilly with moderate headwinds that took away any benefit of the slight downhill slopes and made it more difficult than it had to be. Then, after lunch in Holbrook, everything changed: suddenly I was going mostly uphill, on a freeway with a generous shoulder, and a tailwind most of the time, plus noticeably warmer temperatures. It really did feel like I'd switched over to another set of ride dynamics during my lunch break.

When I got up this morning I really didn't think I'd even try to get to Chambers. The town there is so small it's not even on the highway exit sign. There's a single Days Inn next to a Mobil station and nothing much else, and Booking.com said the motel was sold out, with the next closest one 50 more miles down the road in Gallup. So I just expected to show up in Holbrook early, grab a room at any of the dozen or so places there and get done early for once. Still, I made pretty good time on the way there, even with the 10 geocaches I stopped for along the way, and found myself having lunch about 1:30 with 5 hours of daylight left. Chambers was only about 45 miles away and I felt fine (much to my surprise after yesterday's efforts) so I checked the Days Inn again. Still showing sold out on Booking, but what about their website? I looked there and found 5 rooms available, so I went ahead and reserved one. Thus committed (as there would be no refund) I set off, once again bicycling on the freeway.

I-10 and I-40 are much different, primarily with regards to the shoulder quality. I-10 was very rough and bumpy, with lots of gravel and debris and little effort made to seal up the cracks. Most of I-40 was clean and smooth, except for a few paches where older surface remained and sported some cracks and gravel. Despite the better quality, I still got a flat (in one of the better stretches, too) after about 30 miles of riding. A thin piece of wire somehow pierced the sidewall, and managed to get about 1/4" through the tire and tube, but I went ahead and patched it rather than replacing, and it made it the next 16 miles without any trouble. If the tire still has air in it tomorrow morning, I should be good to go. Oh and I've now officially had more flats on this ride already than on any of my entire previous bikeabouts. (sigh)

Anyway, let's have some pictures, shall we? First, this is a good idea of what I got to look at most of the morning...not much, as the amazing views from yesterday were long gone. In fact, the nice lady who ran the Buckskin Lodge told me that one of the coolest things about driving to Payson is when you break through the woods and suddenly see that amazing vista in front of you, all of a sudden out of nowhere. Oh, she also pointed out something else to me: Heber is actually sort of famous, because it's the setting for the movie "Fire in the Sky," about a man who was abducted by aliens. Apparently the guy who the movie was based on lives around here someplace. 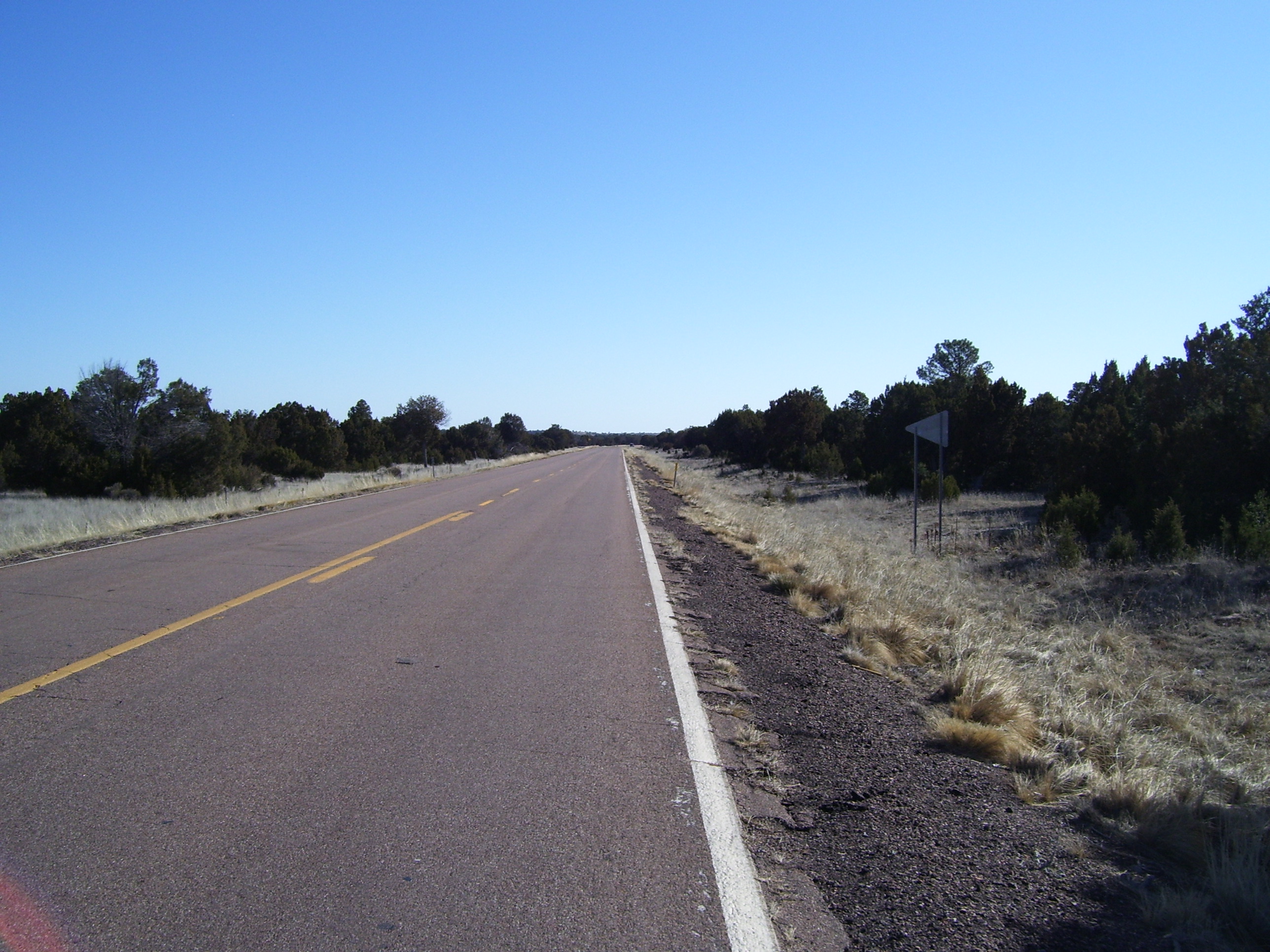 While finding a cache a police car pulled someone over nearby, and when I came back, the cop called out to me, "How's the cycling across America working for ya?" This was Keith Anderson, one of Arizona's finest, and we spent a good 10 minutes chatting about various things. One thing I learned is that he sees cyclists like me from time to time (which is how he could reconize from my gear what I was up to) as this is a fairly popular route. He said he's also seen hikers, runners, and even someone pushing a stroller all the way across the country.

Another interesting comment he made was regarding "America's shortest mile," which I had actually noticed on the ride from Mesa to Payson. I was going along taking breaks every mile, using the mile markers along the side of the road as my guide...and then came around a curve to find a mile marker only about 0.4 miles from the last one! Apparently this was the result of some kind of change to the road and the only way to fix it was to either condense one of the miles into this short one, or they'd have to redo dozens of mile marker signs (and mess up the whole "adopt-a-highway" program in the process). So that explains that, I guess. 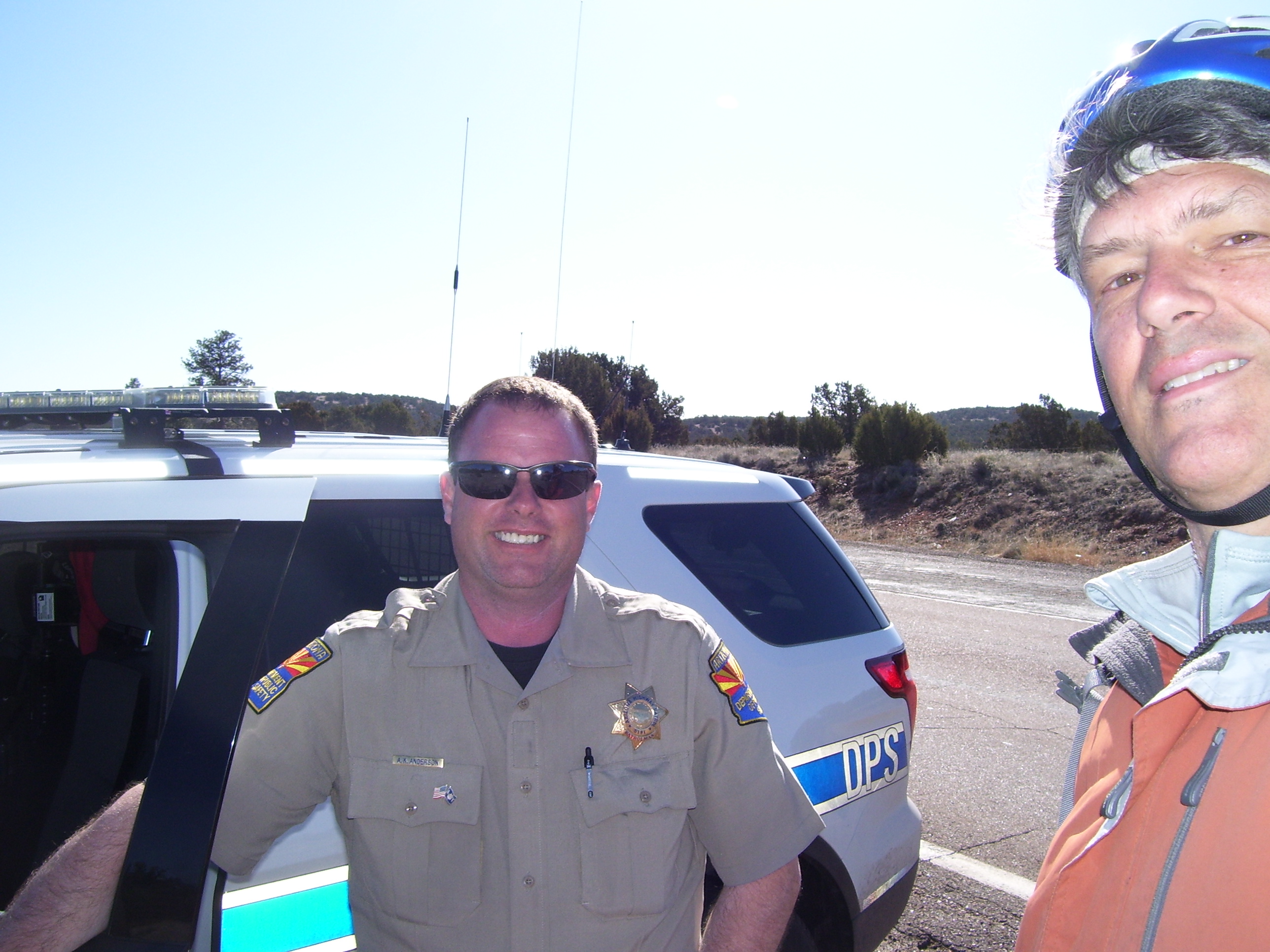 After that fun encounter (I've met so many cool people on this trip) it was back to more of this: 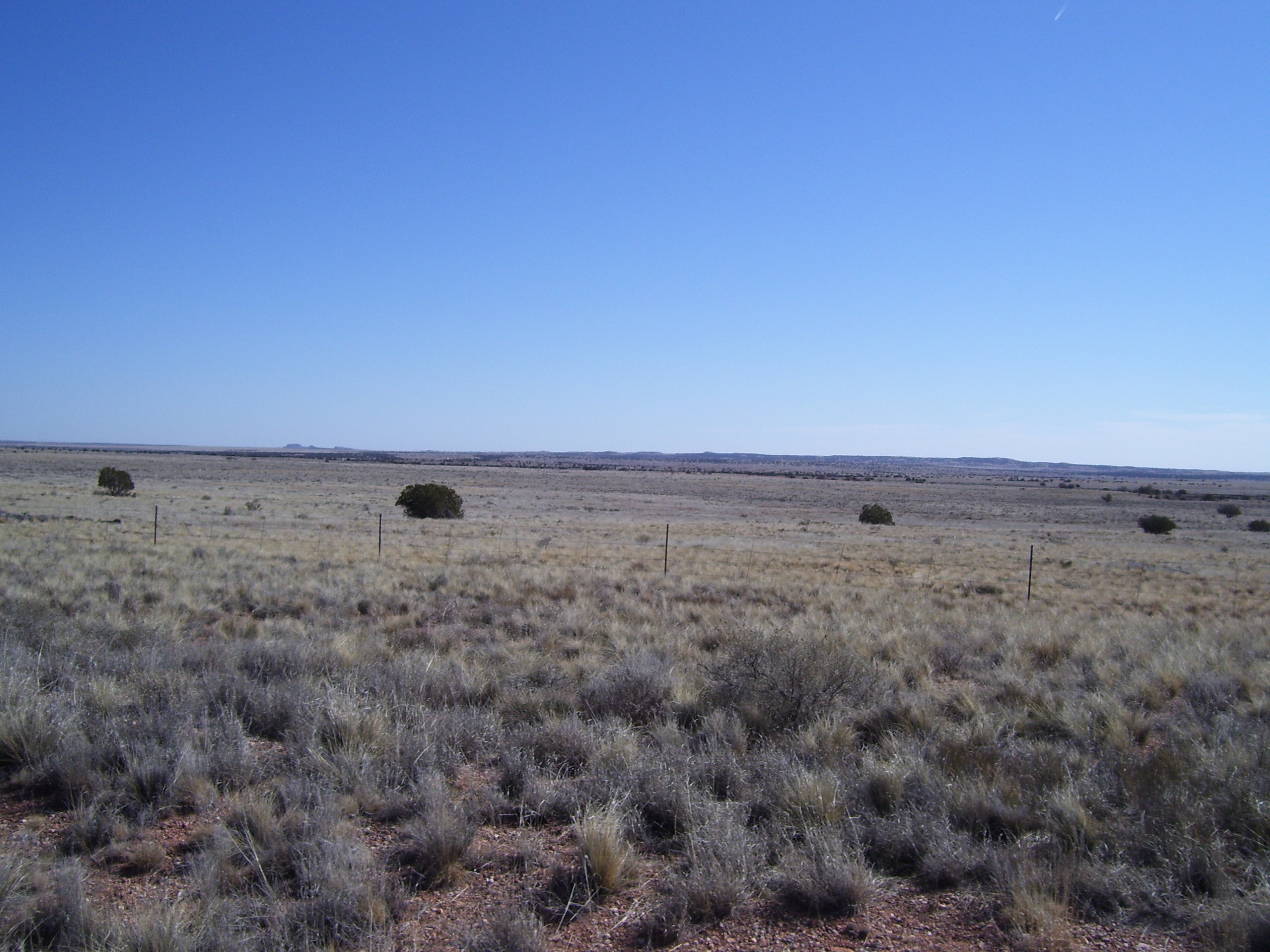 So boring after yesterday's incredible beauty! At least I did pass some windmills at one point... 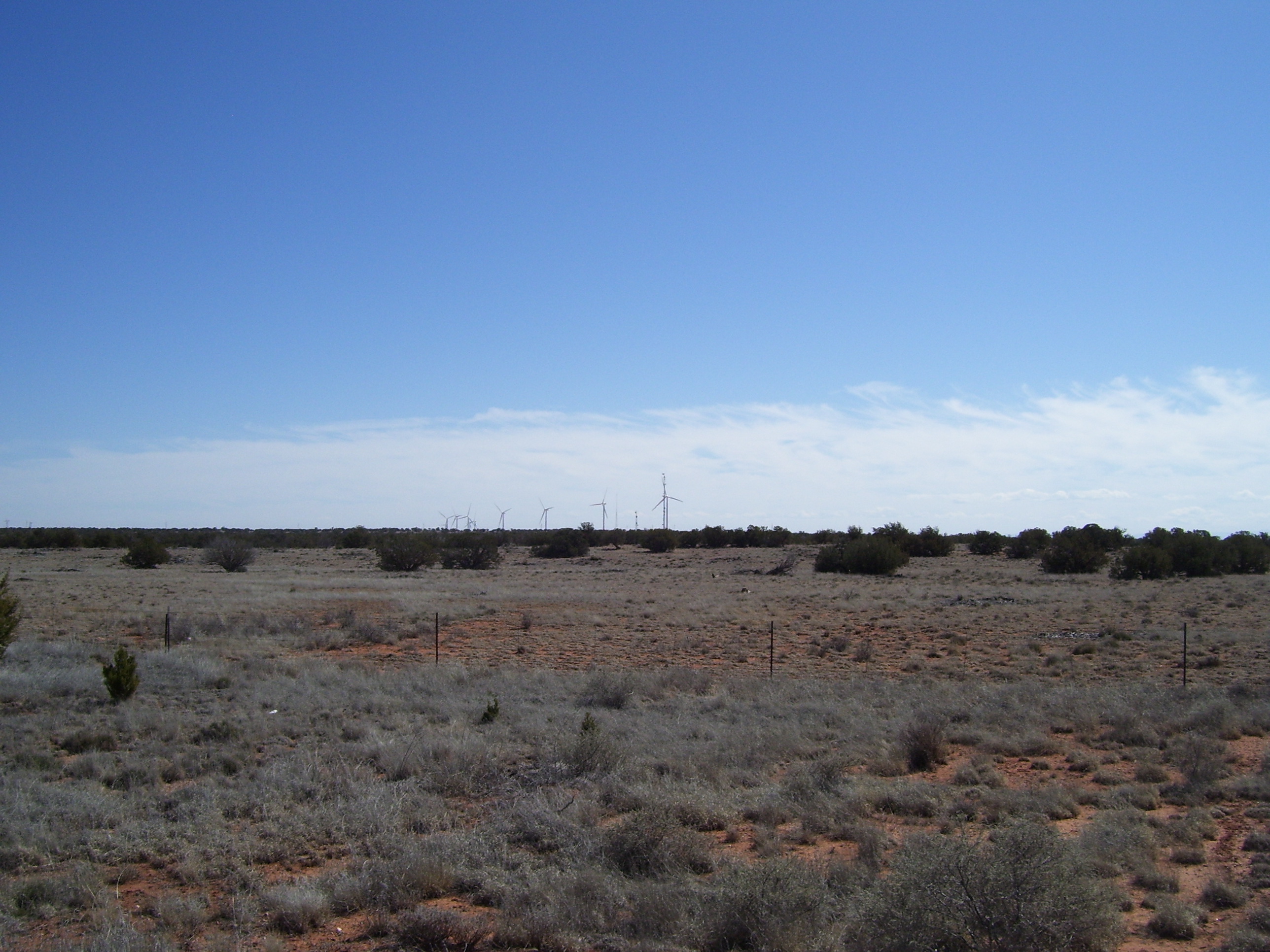 As I got closer to Holbrook some actual interesting features started to appear... 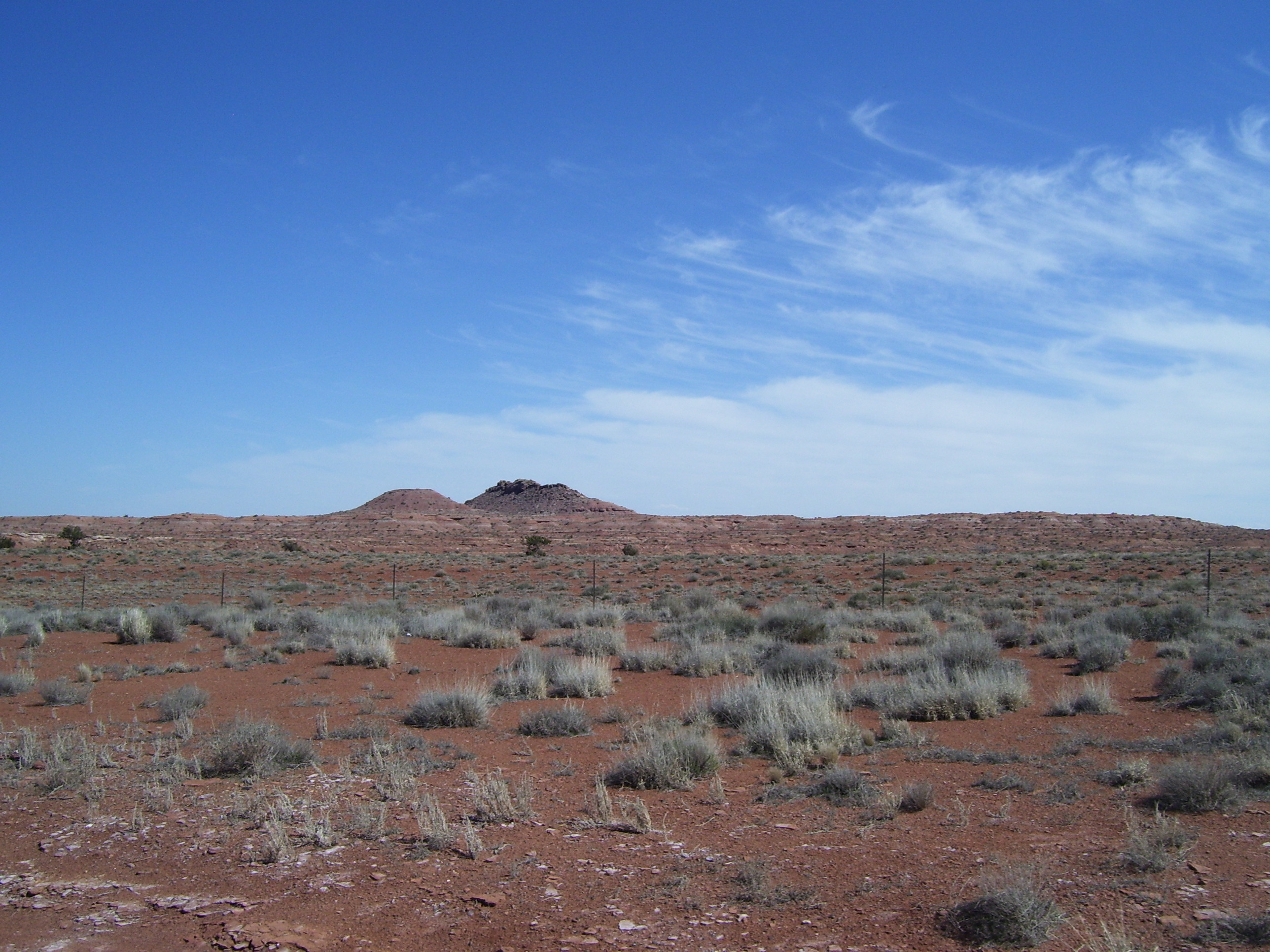 The entrance to Holbrook had this cool sculpture welcoming you to town. Unfortunately I managed to cut off the top, but it's a cowboy (quite possibly the Lone Ranger) atop a stack of petrified wood. That's another big block of it on the bottom right. I'm getting close to the Petrified Forest National Park, and that's what this area is known for. 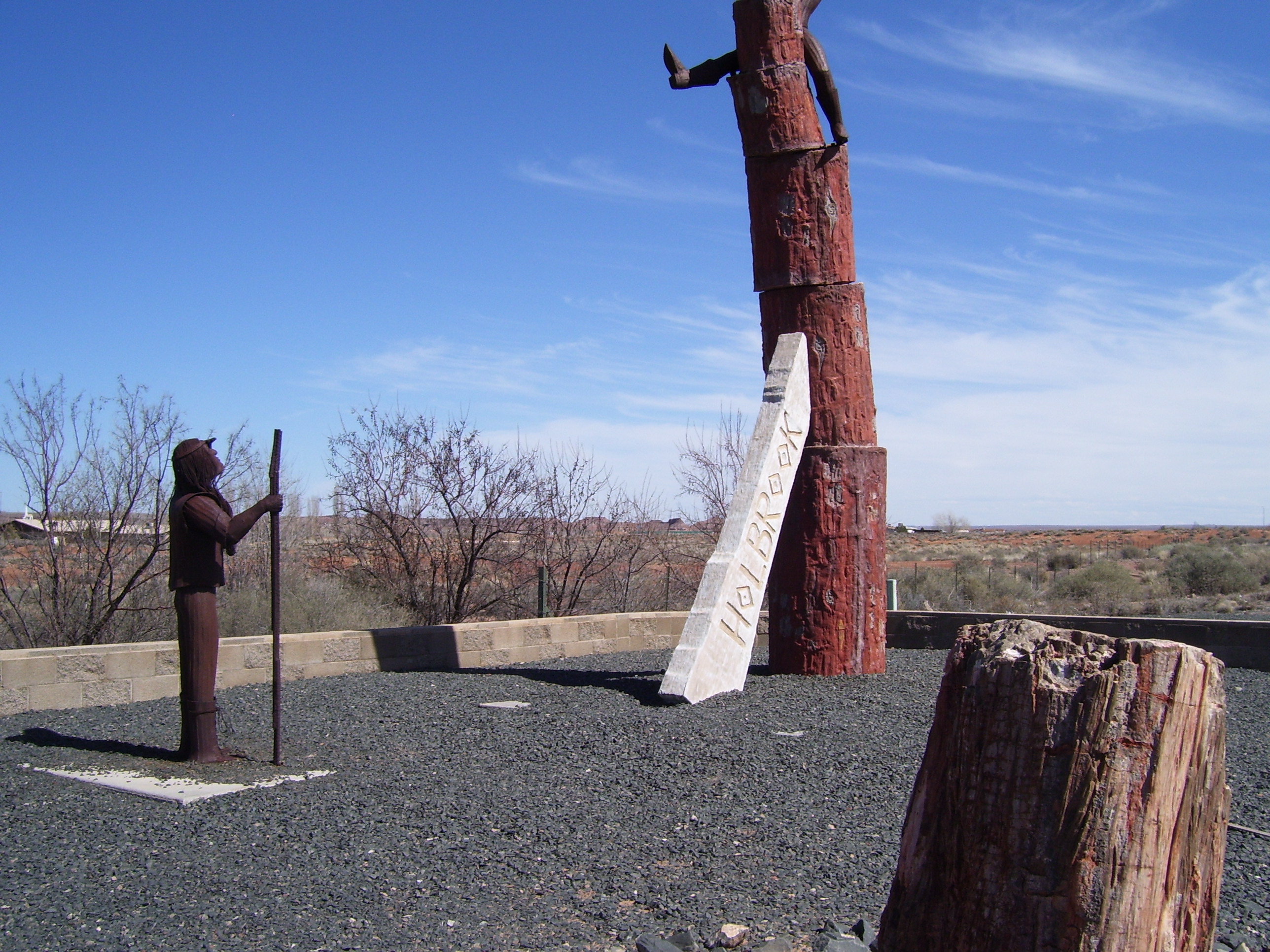 As I mentioned earlier, after lunch it was back on the highway...to a steady diet of this right here. It's funny, after a while you just forget about the traffic going by...occasionally someone with a bike on their roof would honk or something and I'd get a reminder that hey, yeah, there's a river of vehicles passing on the left, just FYI. 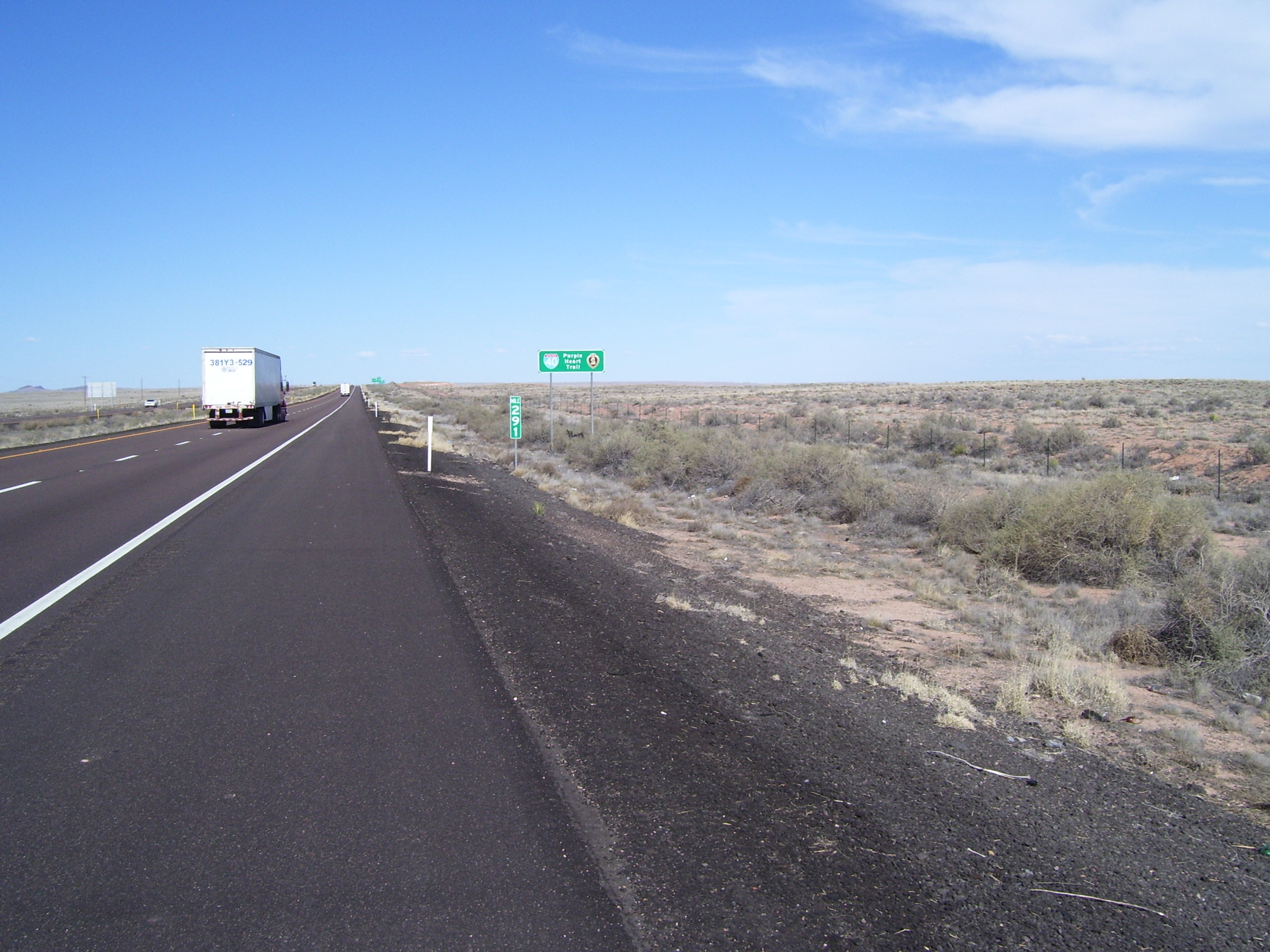 If that Days Inn doesn't work out, maybe I can stay here? 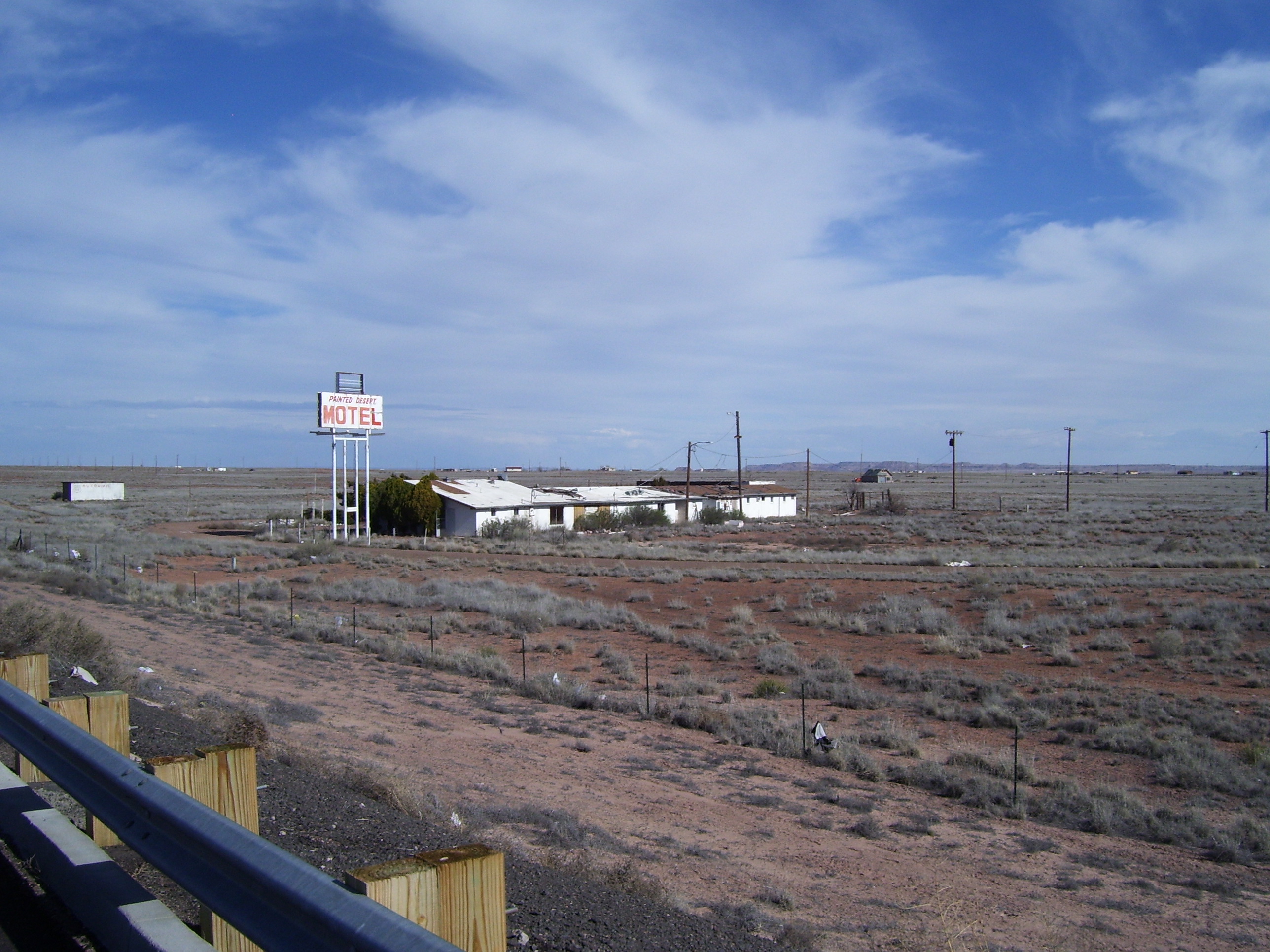 At one point I exited to take a break and find a cache, this one located at one of those tourist trap type places, and I came upon this hilarious display: 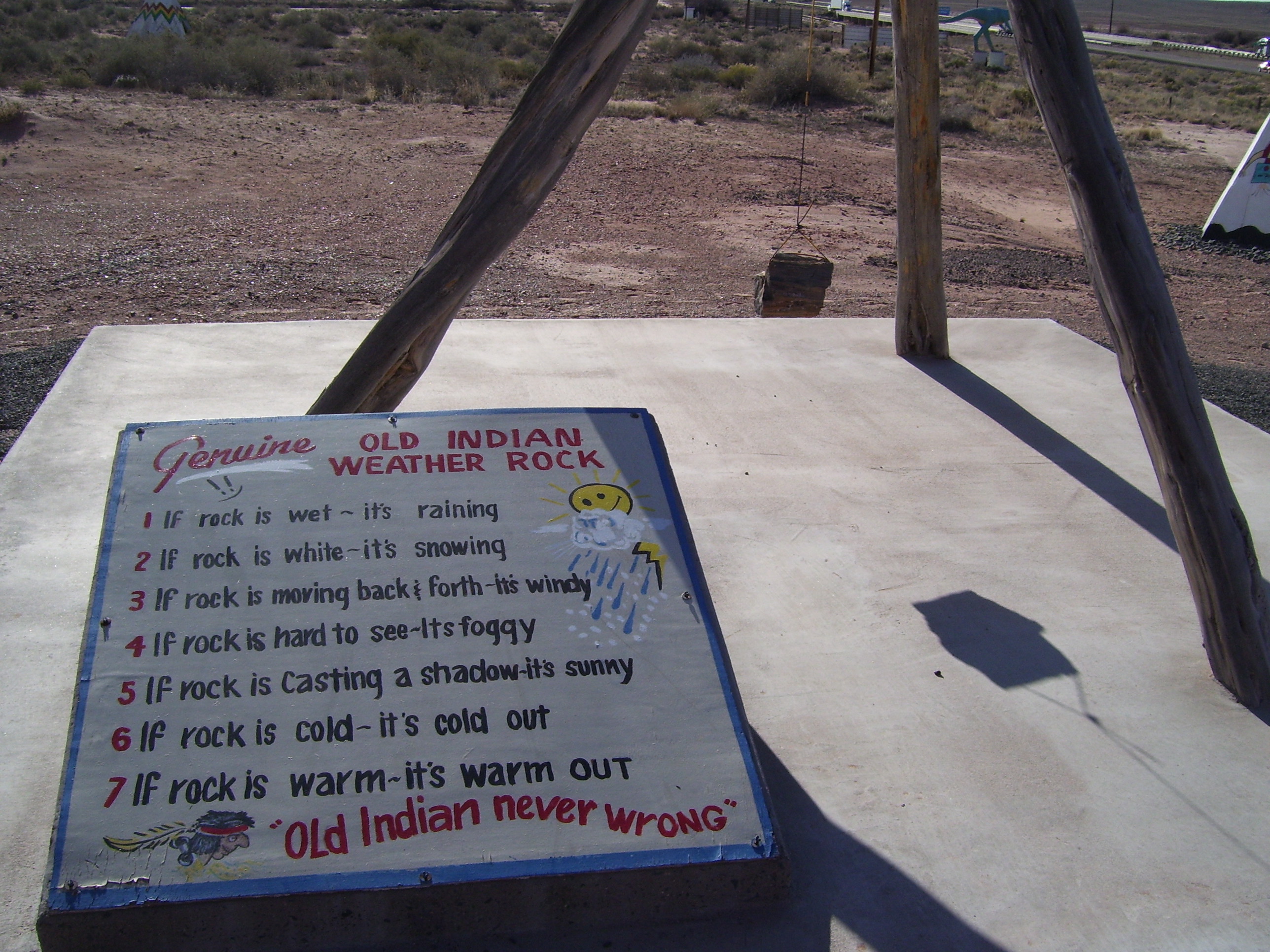 Moving right along, I soon saw the beginning of the Painted Desert to the left. The Petrified Forest and Painted Desert are both in the same place, actually. There's about a 28-mile drive involved in seeing the whole national park, which of course I didn't have time for, but I still intended to visit some of it, since I was right there. 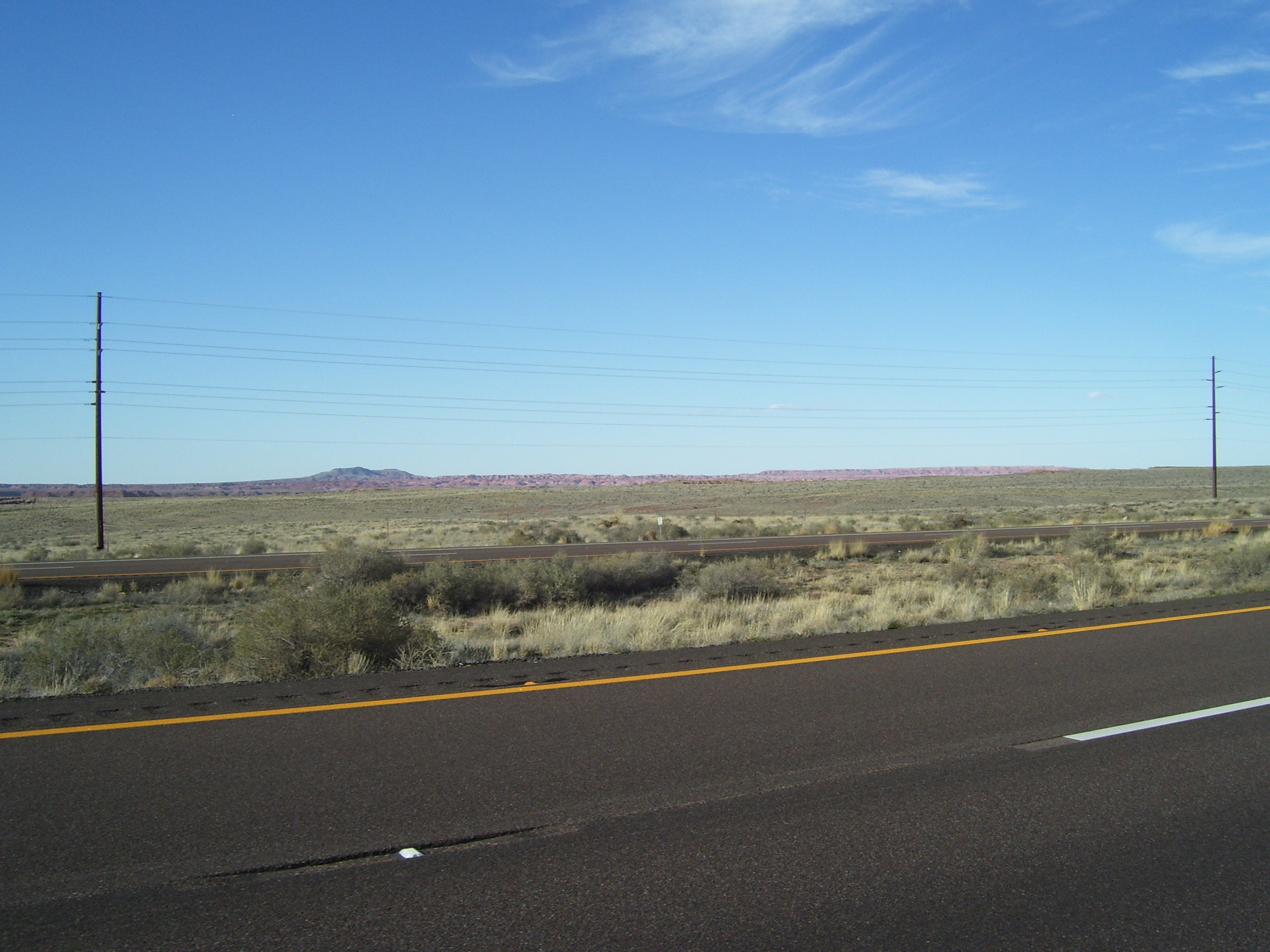 So yeah, I pulled off the highway and checked the place out. 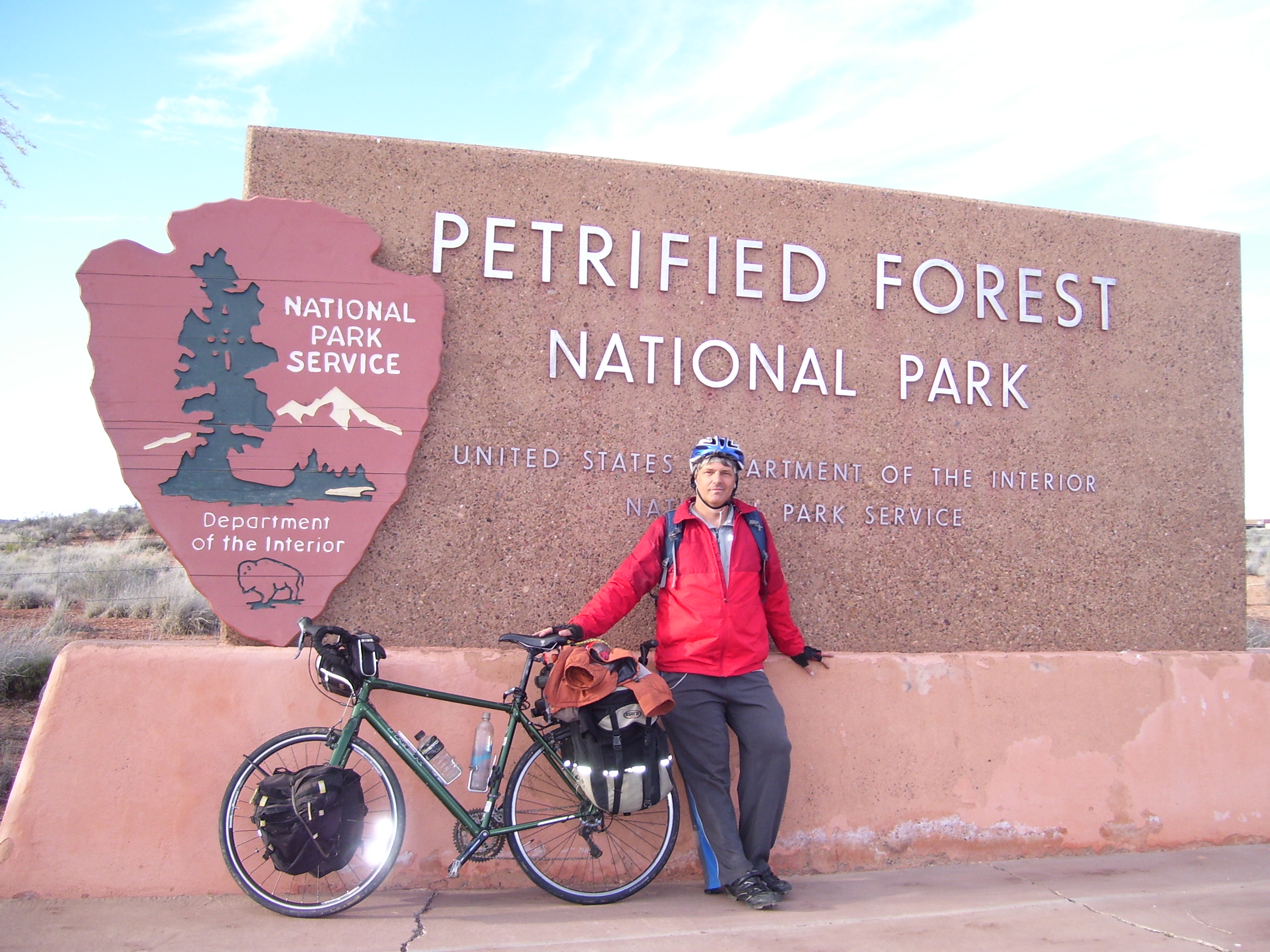 If you've never been to the Painted Desert before, you really should check it out. I'm going to post some photos now without comment because they don't need it, but they also don't do justice to the breathtaking views around every corner. And this is only the first couple of miles down the road, after which point I had to turn around and head out. 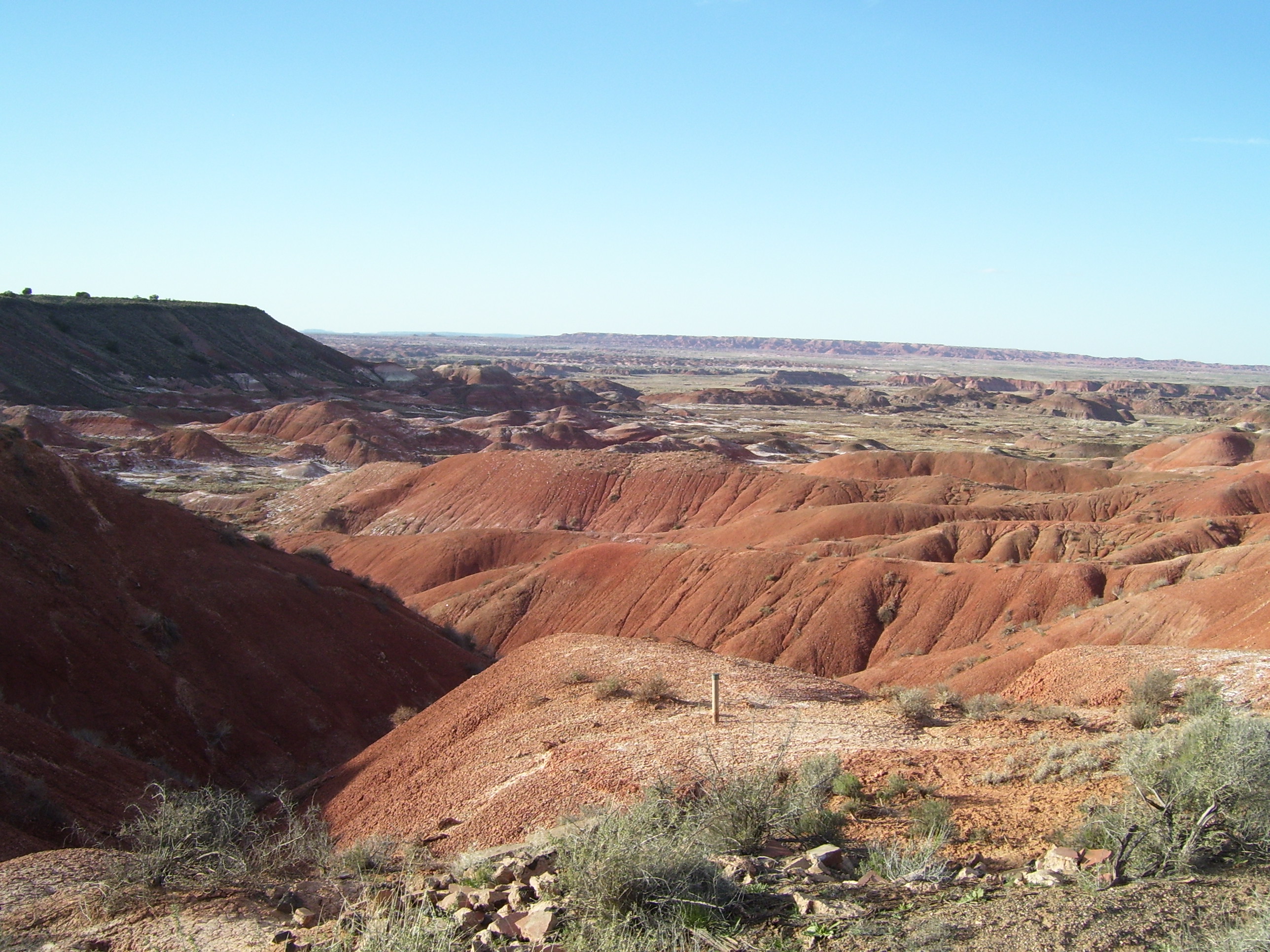 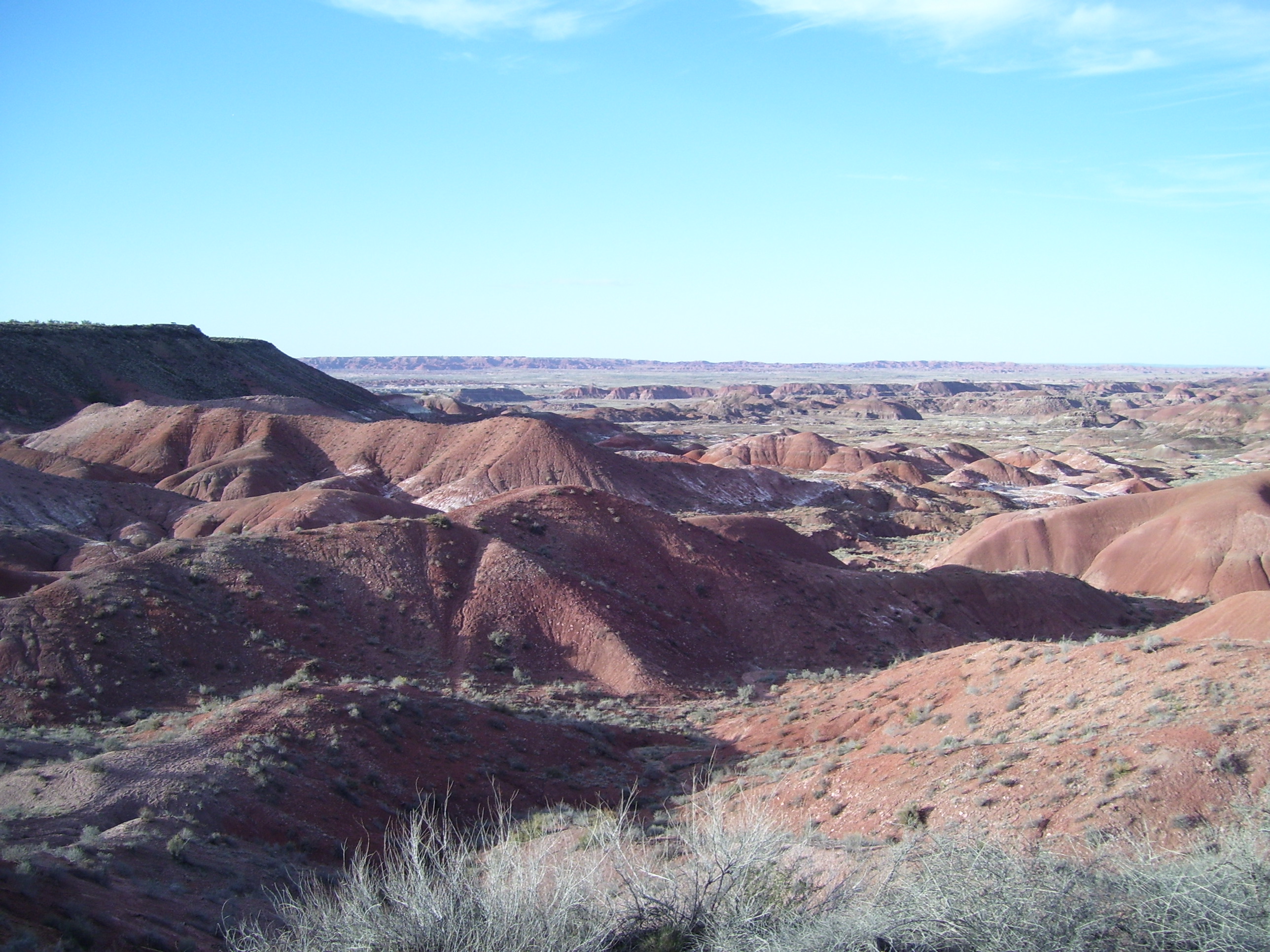 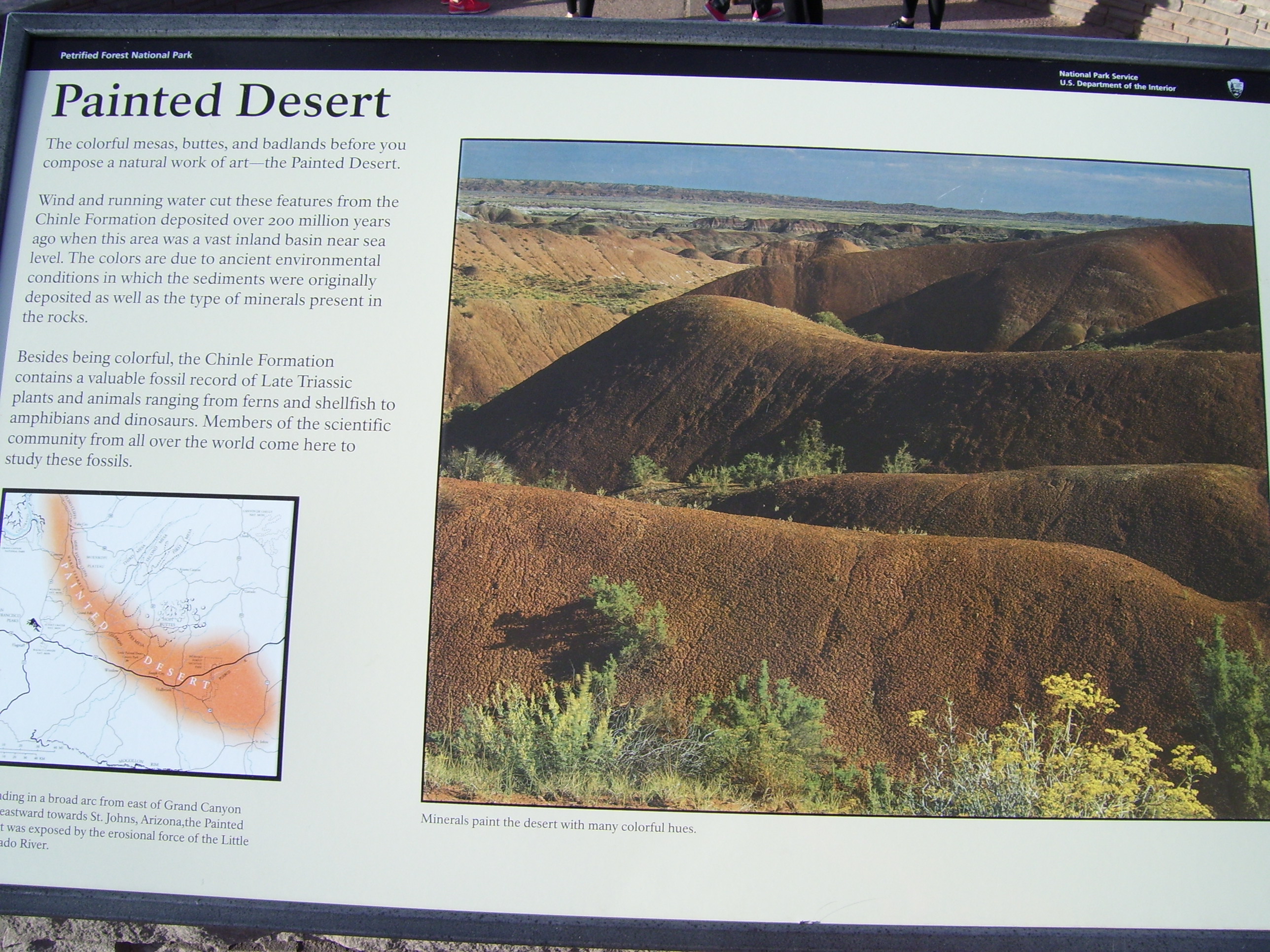 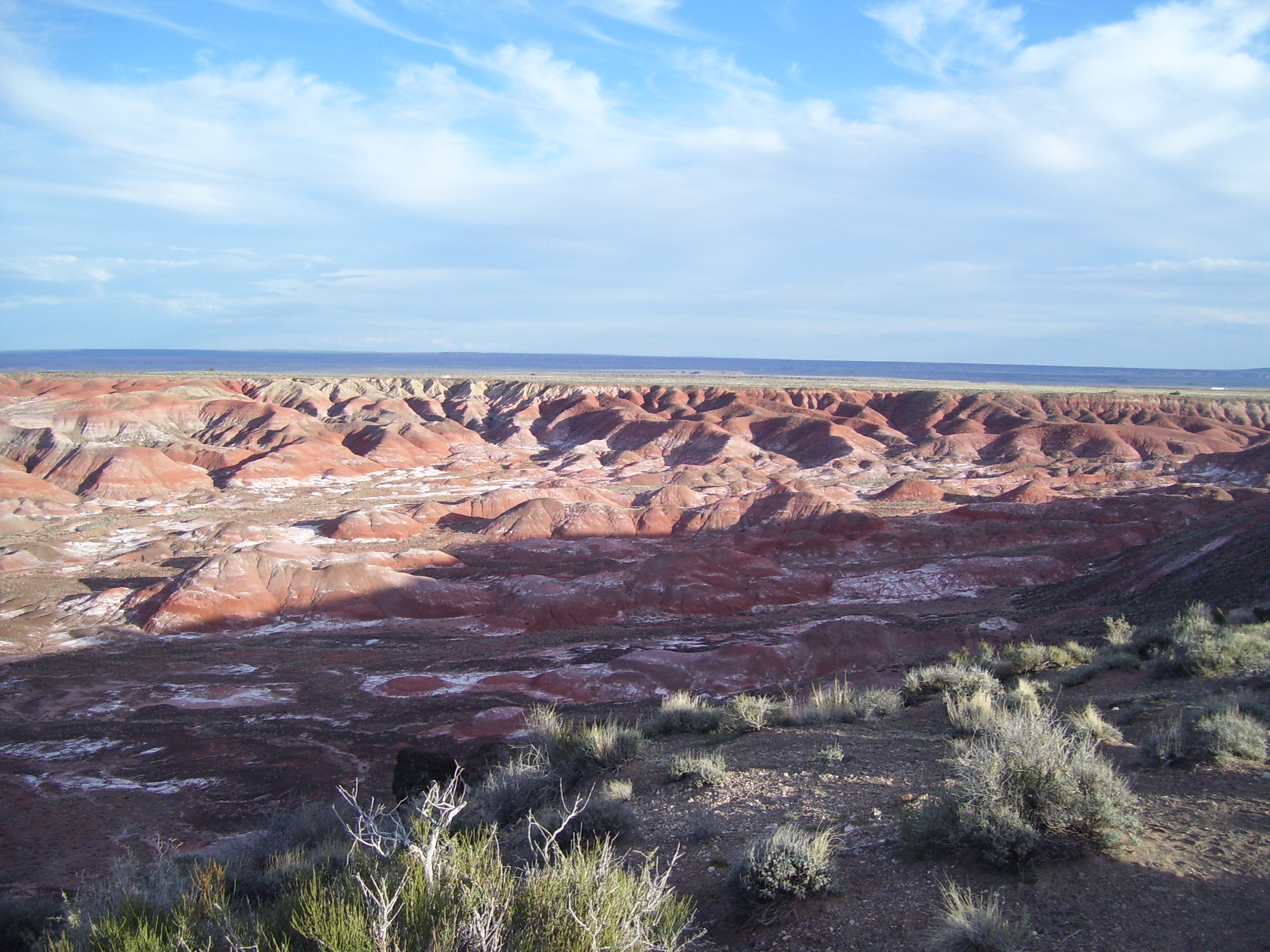 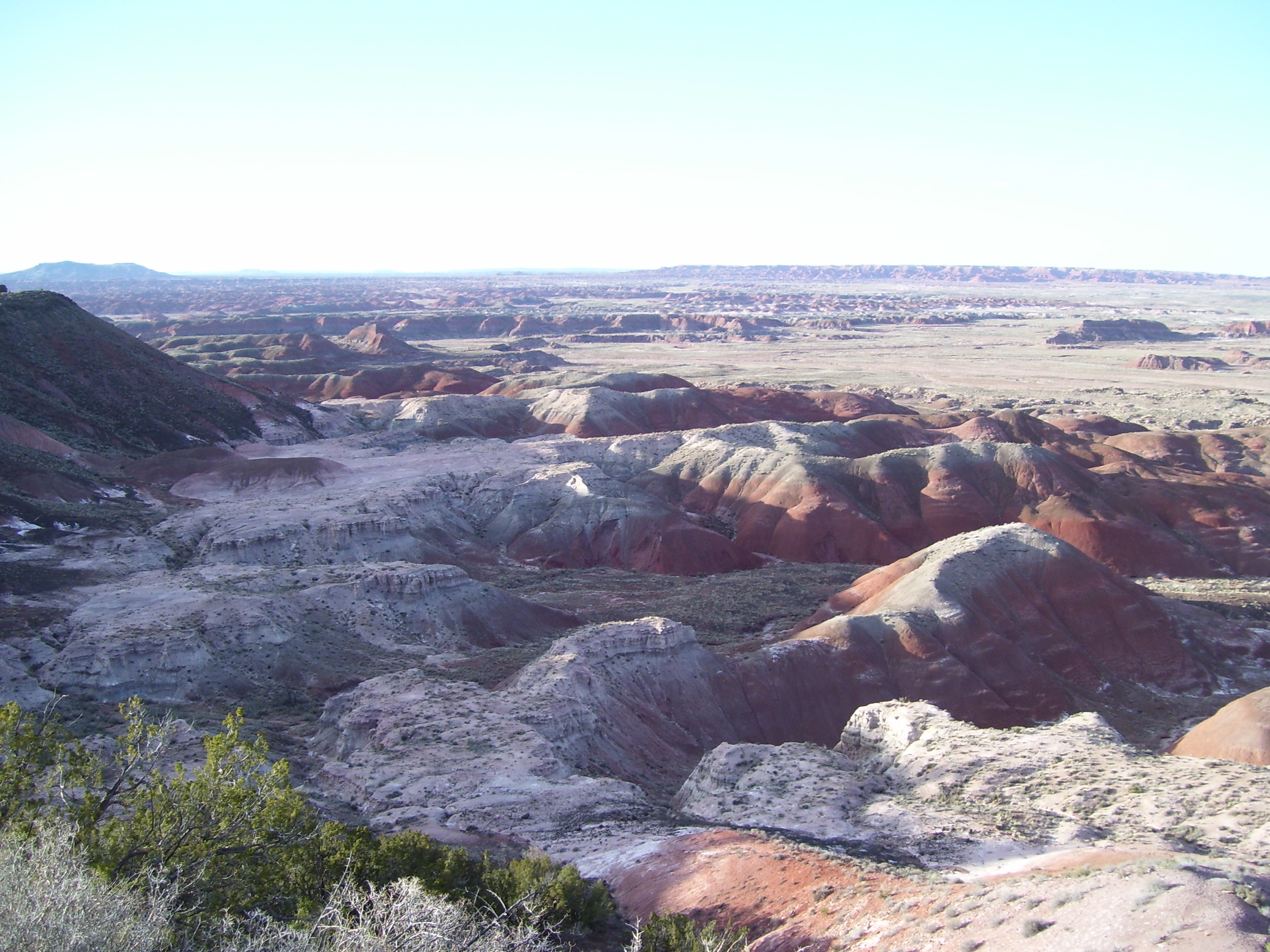 The cost to get in is $5 for bikes and $10 for cars, both well worth it in my opinion. I didn't make it there until about 4:30, and despite the fact that if I tarried, I'd have to ride on the freeway in the dark (again), I spent over an hour here and wished it could be more. I wound up having to change a flat in the dark, but it was worth it, believe me.

Oh, and yes, I got another century in on this trip. I must admit I had to pad the miles a little by riding down the road a mile or so and back before checking in to the hotel, because I was so close I wasn't going to miss out on another century ride! This pushed my total miles over 700 for the trip so far which puts me about 1/4th of the way done. I initially estimated this trip would take me right around 40 days, which puts me right on schedule.