The weather forecast for today featured 20+ mph northeast winds most of the day, which I knew would suck considering I'm going east the entire time into that maelstrom. On any other day I might just cut the ride short or go a different route, but not today...I'm meeting some people for dinner in Amarillo tonight and also I want to be in position to attend a geocaching event the following morning. So that meant I had no choice but to ride 80+ miles into that gale force nightmare.

So how to avoid it as much as possible? I did something totally unusual for me...I got up before dawn and hit the road before sunup. In fact, here's the proof right here. This is sunrise on the eastern side of New Mexico. 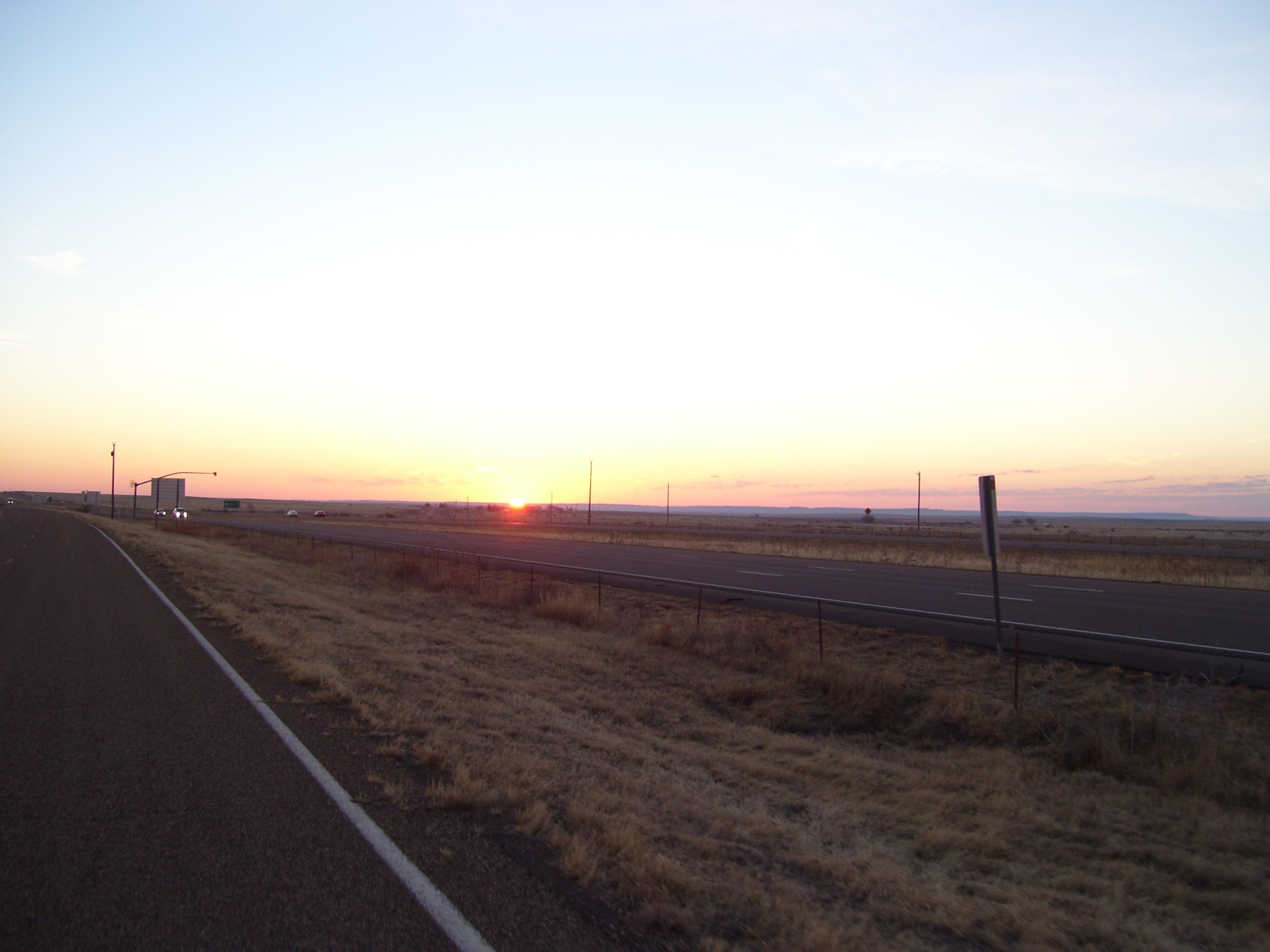 I did also have another good reason for doing this, namely the fact that I'd be moving into Central Time and thus losing an hour (as far as meeting my friends for dinner was concerned, anyway...the sun would be up just as long regardless of what it says on my watch). Getting up early would earn me at least a couple of hours of riding time before the winds really got strong, and the less I had to ride into that the better. So I set my watch to CDT before going to bed, and got my butt moving and out the door before 7:30. This is not something I ordinarily do, but today's circumstances demanded it. And it turned out to be absolutely the best possible move I could've made.

The first couple of hours of riding felt like they didn't really count. The air was still and the morning cool and mostly easy going, except for a couple of tough hills here and there...nothing I couldn't handle. I stuck to the frontage road and this is what it looked like for most of my last two hours in New Mexico: 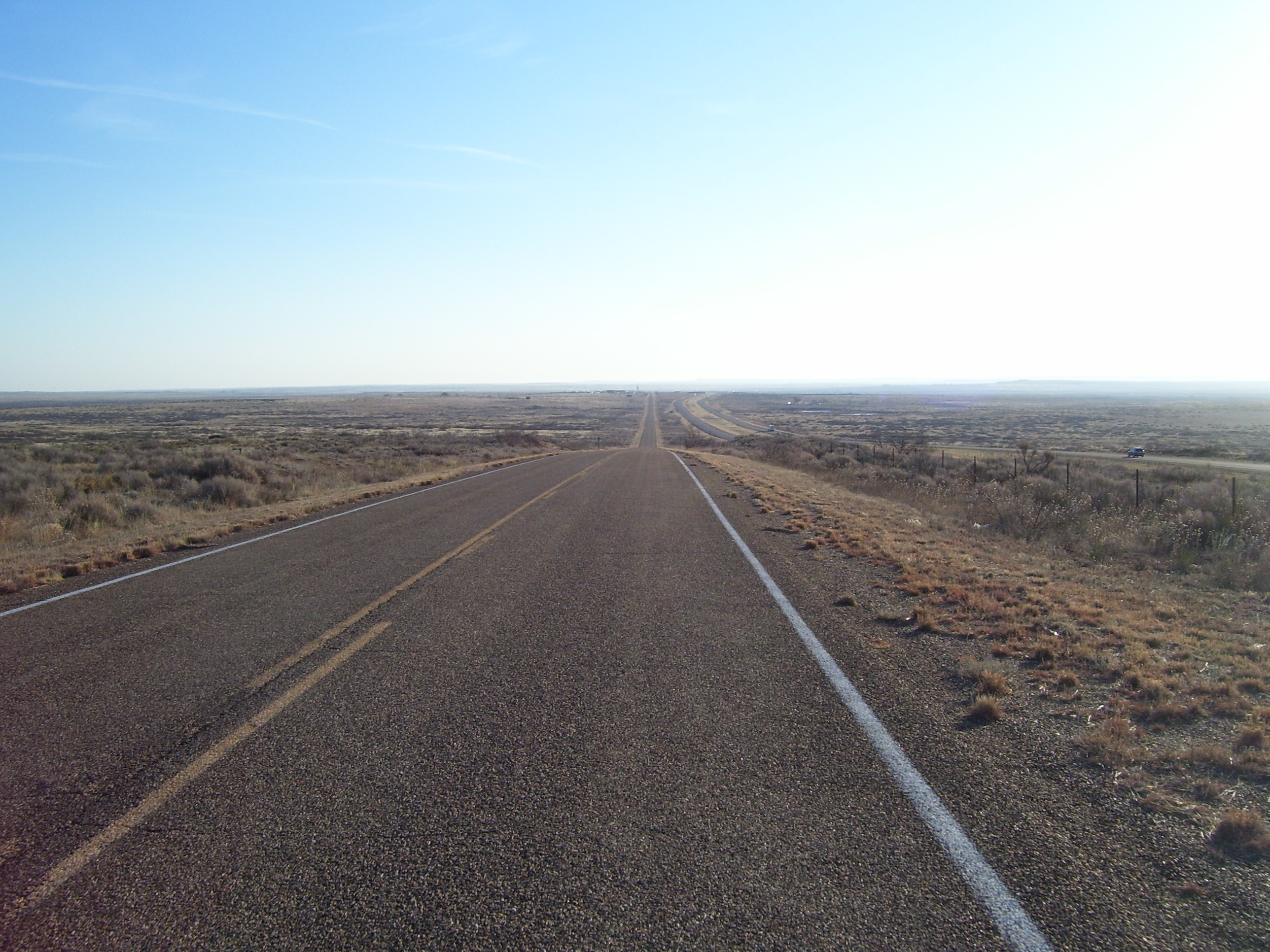 Right near the border I came across this iconic structure, which so far had yet to really start moving. (Notice the crow sitting on it. Classic.) 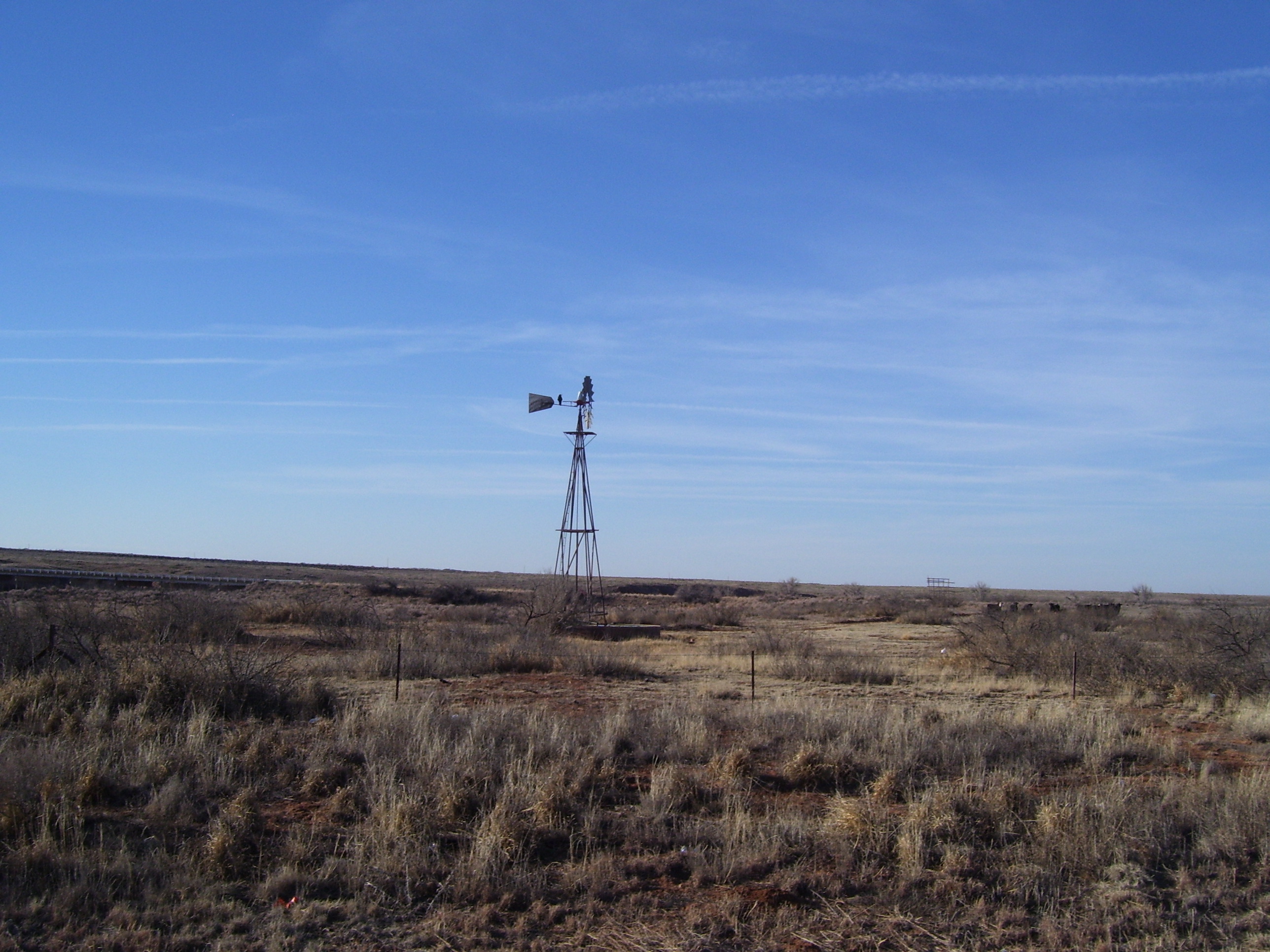 Finally after a couple of fairly uneventful hours I came to a new state, and rode out on the freeway to get a picture: 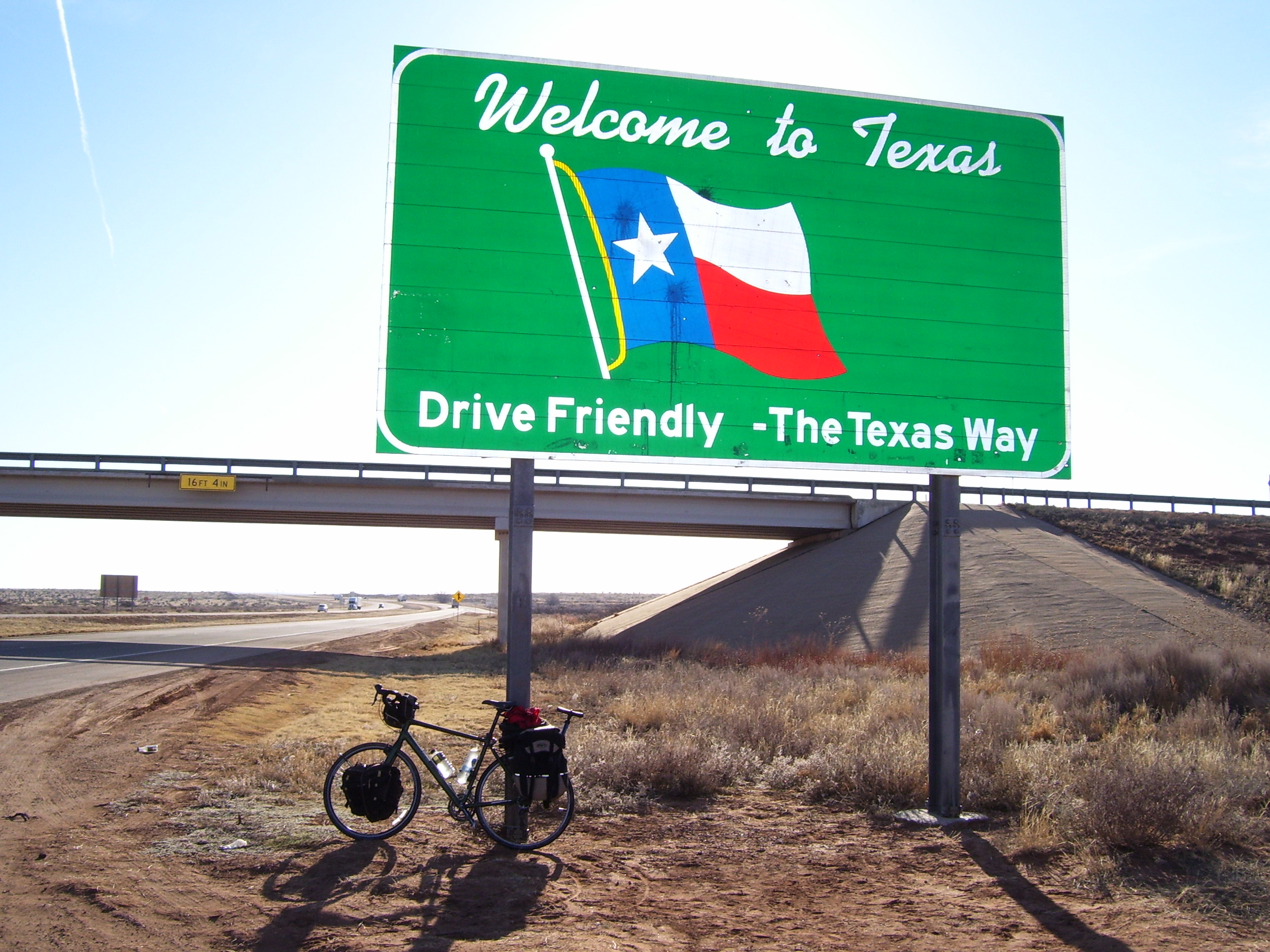 For some reason Texas doesn't have any kind of rest area or welcome center on I-40 eastbound...there was a sign saying visitor information was at exit 75 or something, basically on the far side of Amarillo. What's that all about, Texas? Not very welcoming of you, especially with New Mexico having a giant modern welcome center on the opposite side.

Actually this is the first structure I came across in Texas as I stopped here for a break and a cache: 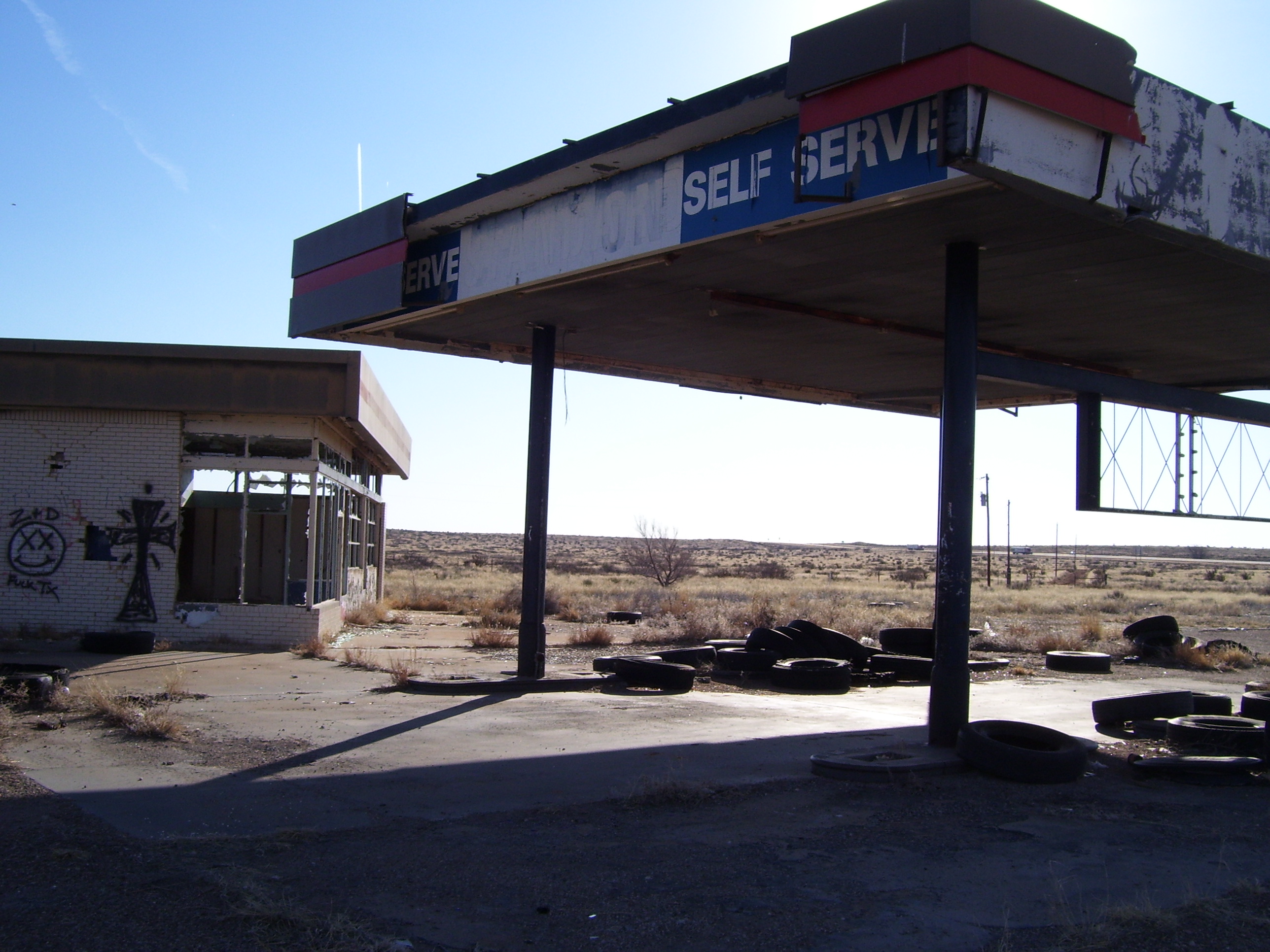 Ever wonder what it looks like inside a gas pump? Well wonder no more! 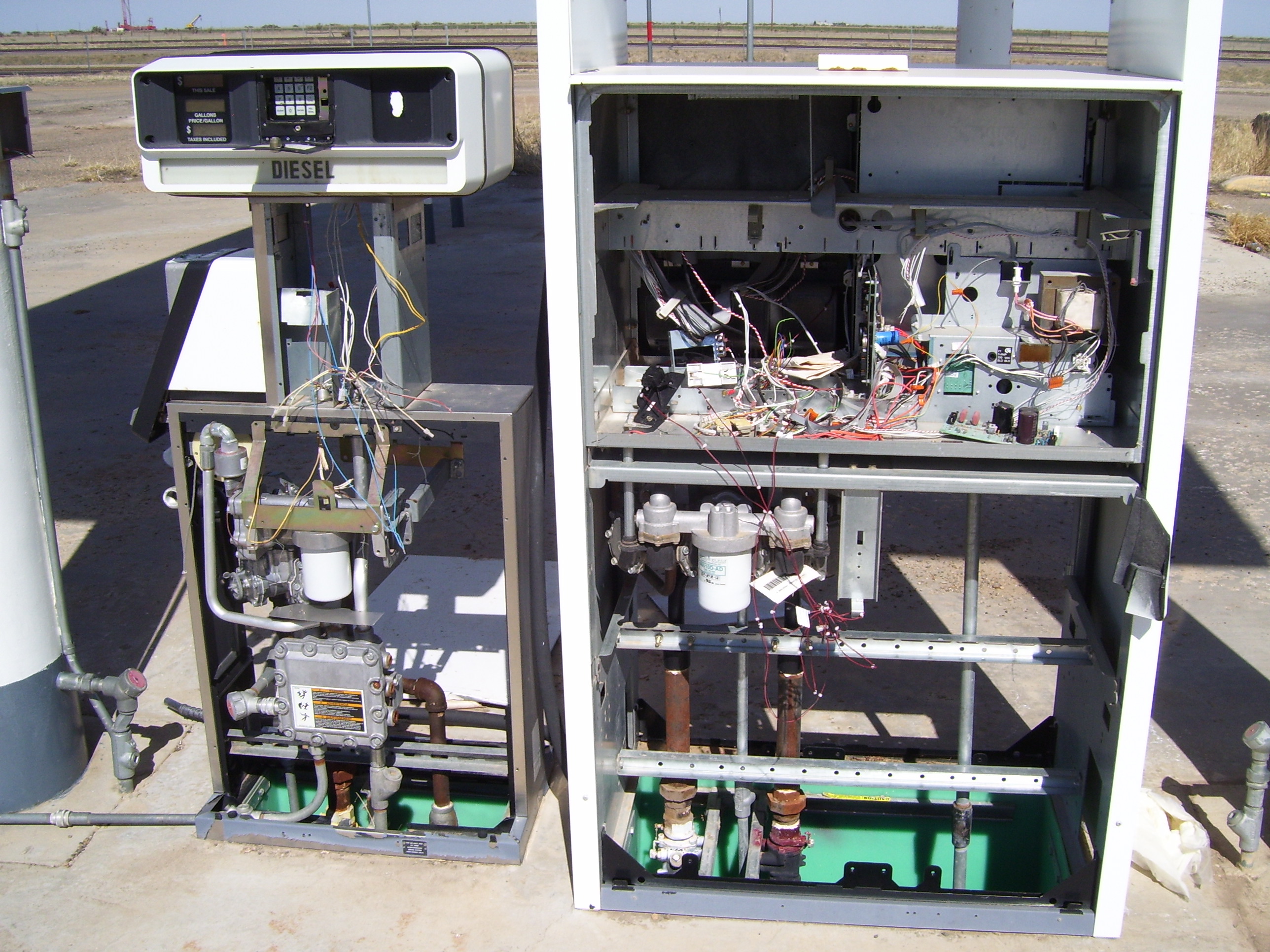 Then it was back on I-40, because the frontage road ended at the border, and the farm roads nearby were a maze of dirt and gravel paths I had no intention of biking on. Apparently, though, in Texas you can ride a bike on pretty much any freeway you want because the laws say bicyclists can go on any road in the state unless a bike path or trail is specifically provided instead. Of course I wouldn't try it in a major city as it wouldn't be terribly safe, but legally it would be okay. Anyhow, riding here wasn't a big deal as the shoulder was quite nice. Oh and that hill up there, that's the very last hill of the day (other than very slight inclines here and there). 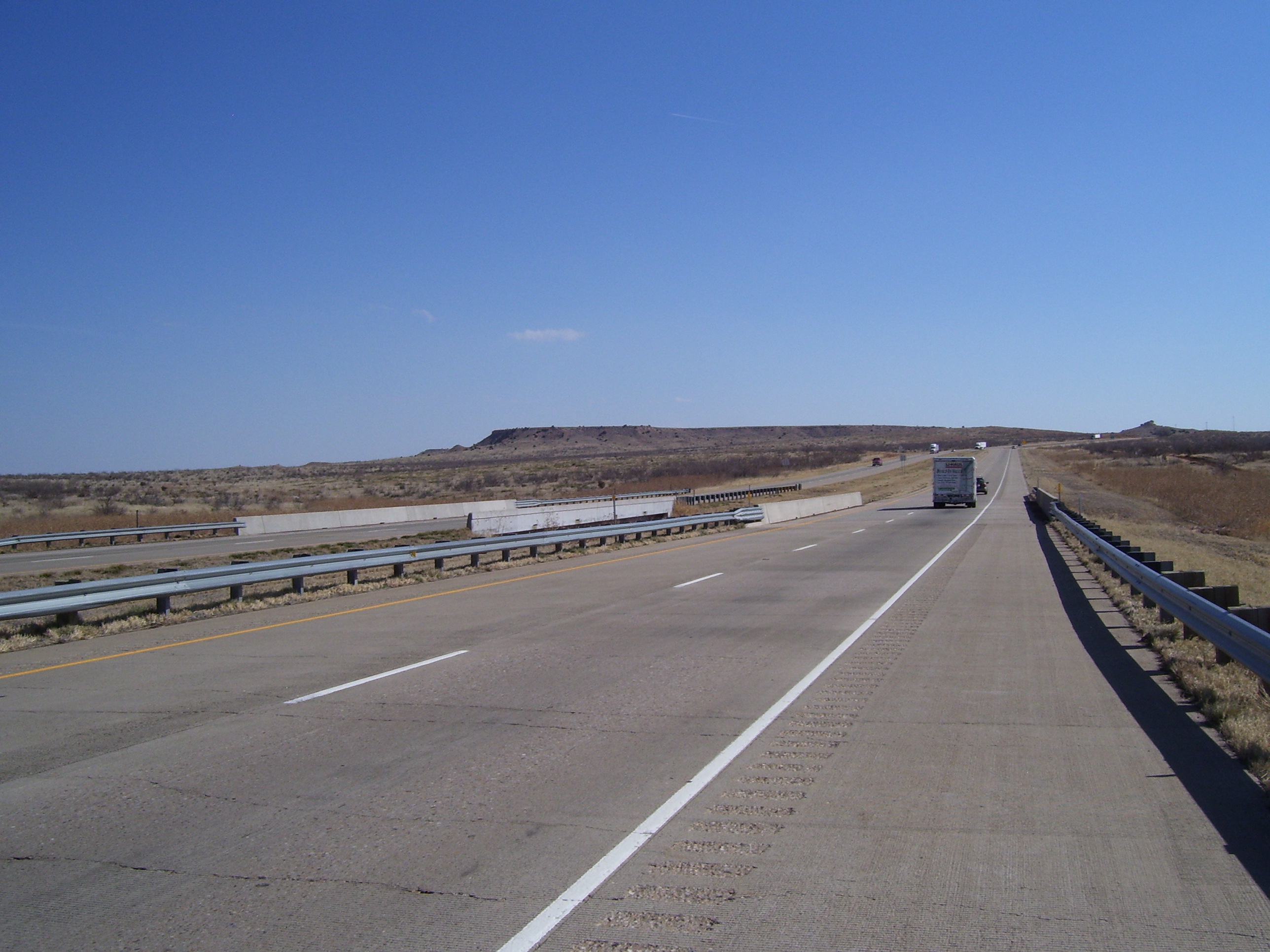 The winds started just after I crested this hill and didn't let up for the rest of the day. The first 20 miles or so of the trip became a happy memory as I had to put my head down and drive forward into these merciless winds that howled out of the northeast without mercy. There were no longer any downhills, just what felt like tough climbs, and every slight incline became a slow-motion low-gear crawl for what seemed like hours. There would be no relief or cover, just what felt like an endless losing battle that made me seriously wonder if this was actually a harder day than the Mesa to Payson mile-and-a-half mountain climb just over a week ago. Either way this was one of the hardest cycling days I can ever recall.

Anyway, most of the towns I came to were just little truck stop corners, but I did reach a couple interesting places. This one is in Adrian, and it happens to be right at the center of Route 66...hence the name, Midpoint Cafe. They had a couple of classic cars and other memorabilia nearby, like that pickup truck there. 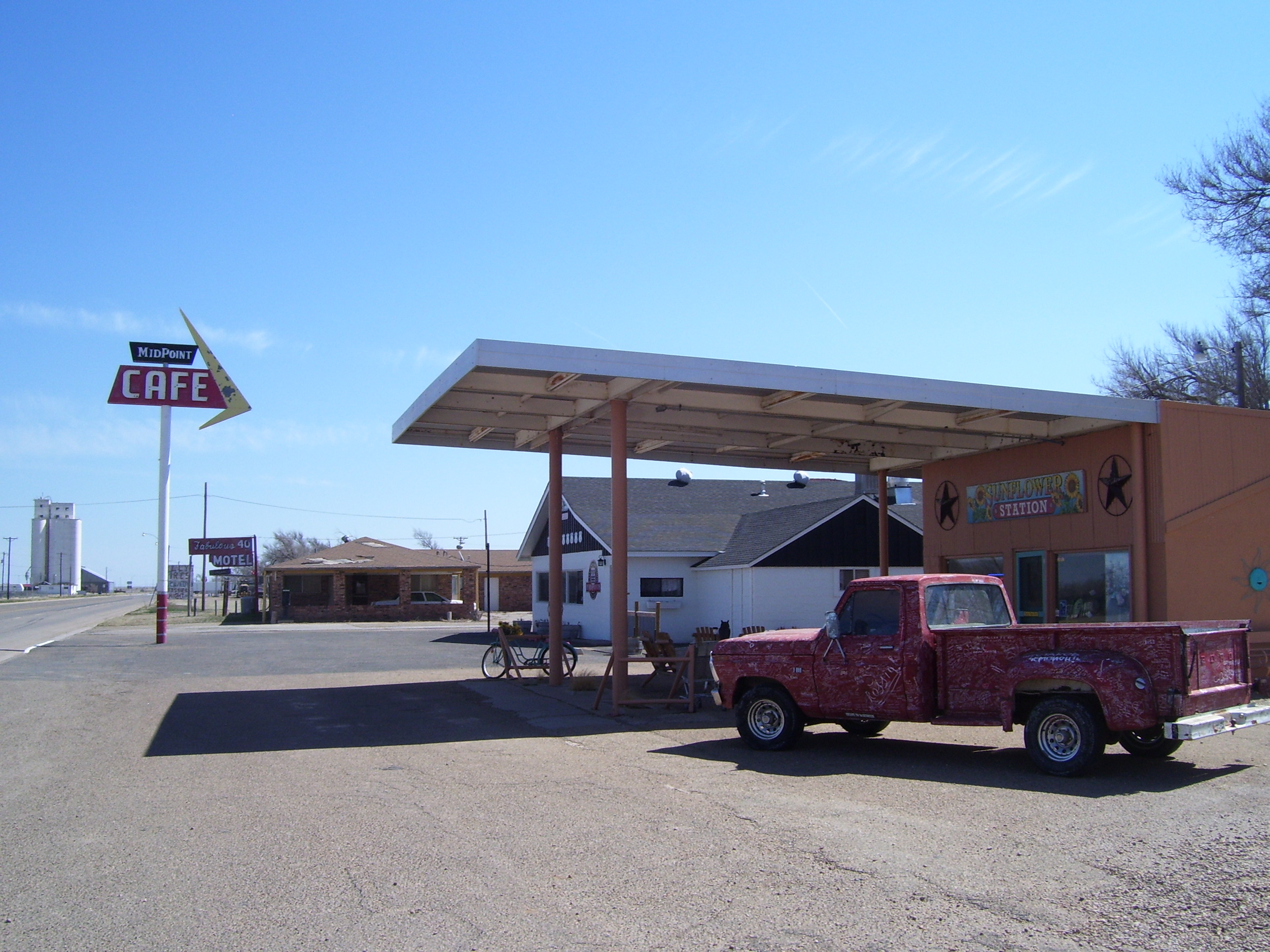 In fact this particular truck has been signed by a lot of visitors! 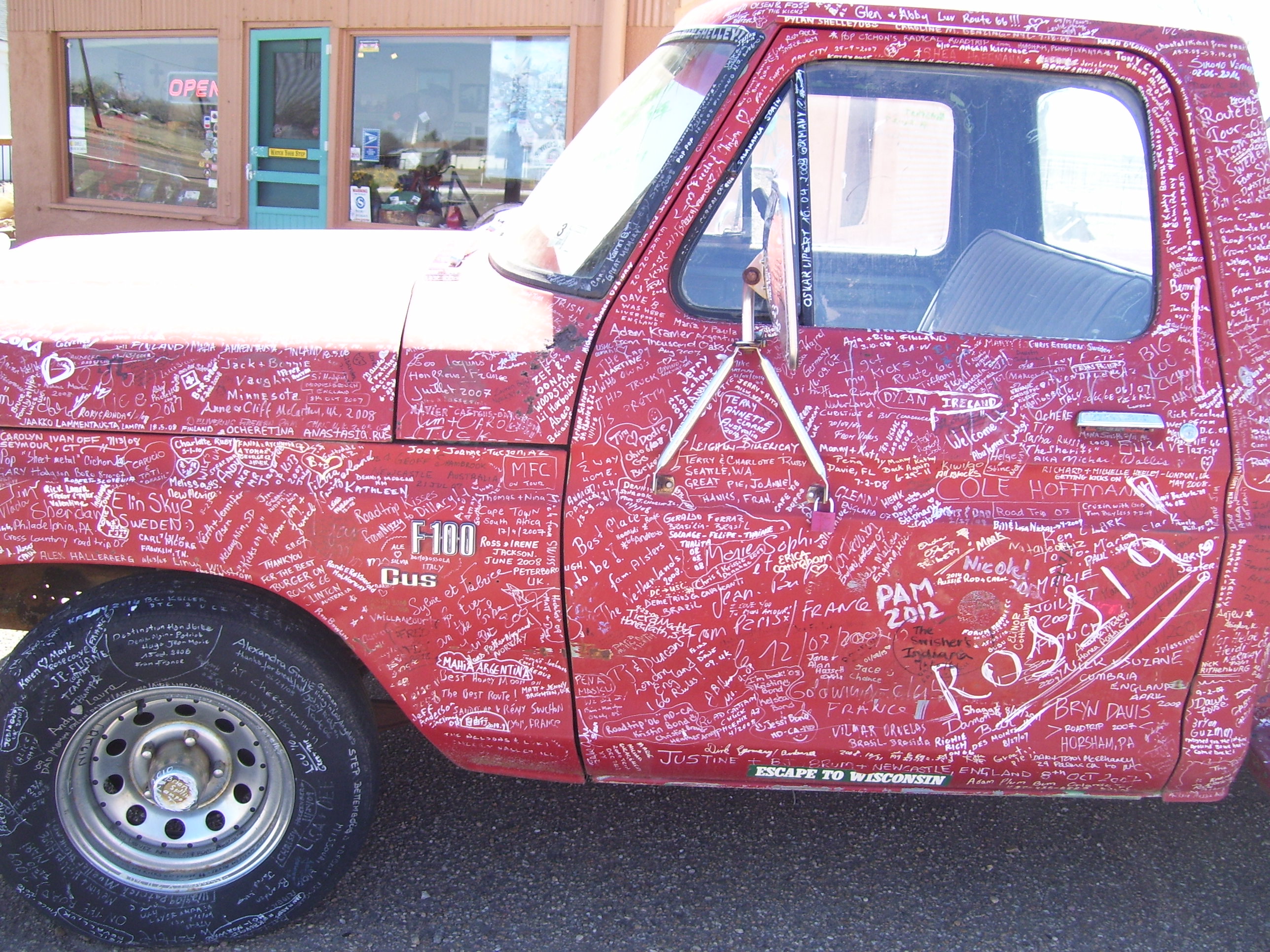 Back on the road I came to a massive wind farm, bigger than anything I've seen so far. I think this one stretched on and on for at least 20 miles (no joke). For several hours I just biked past line after line of these things. 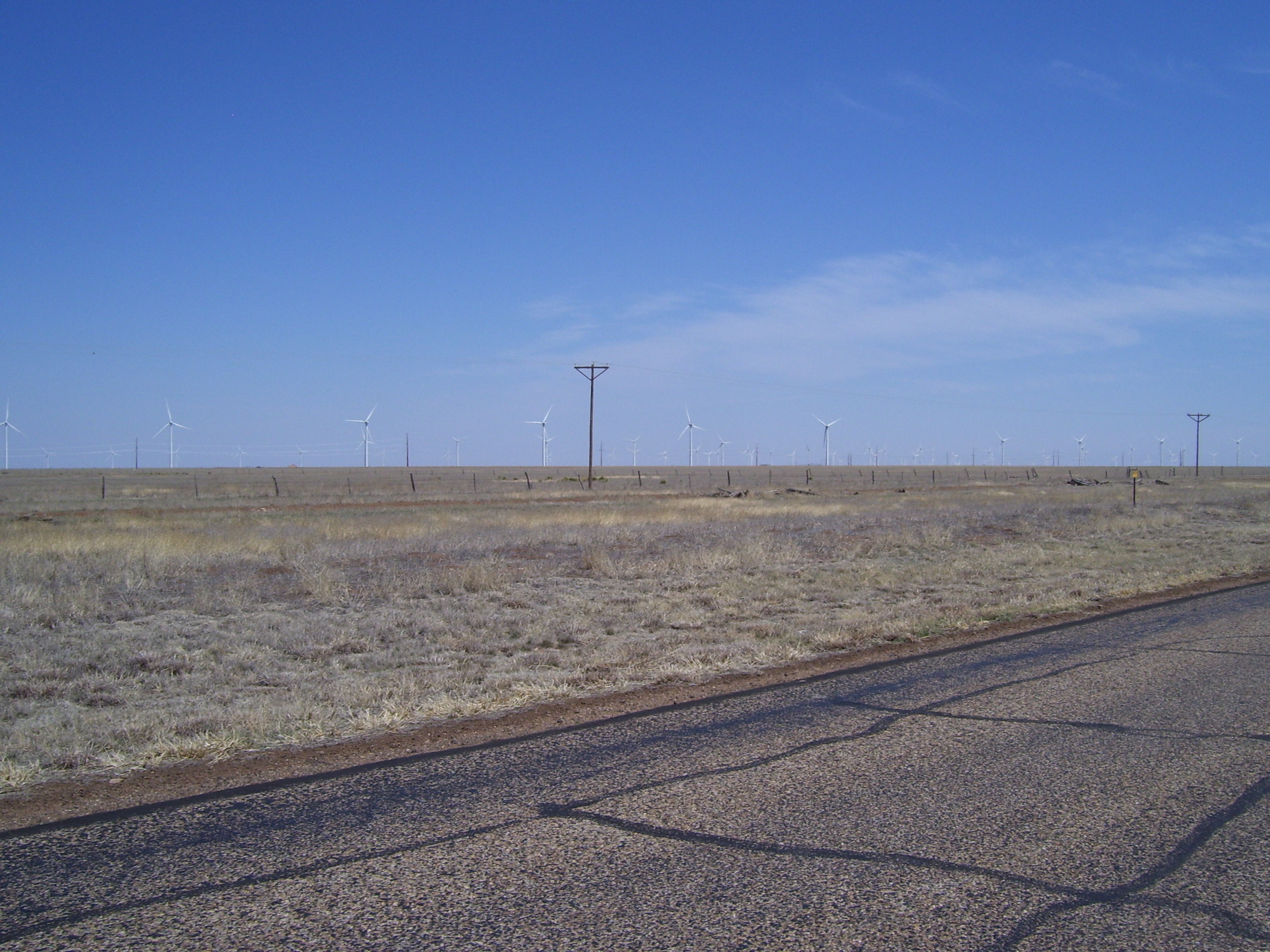 In the town of Vega I came upon this restored classic style fuel station, some of which is made of original parts. It's not operational, but it looked pretty cool. 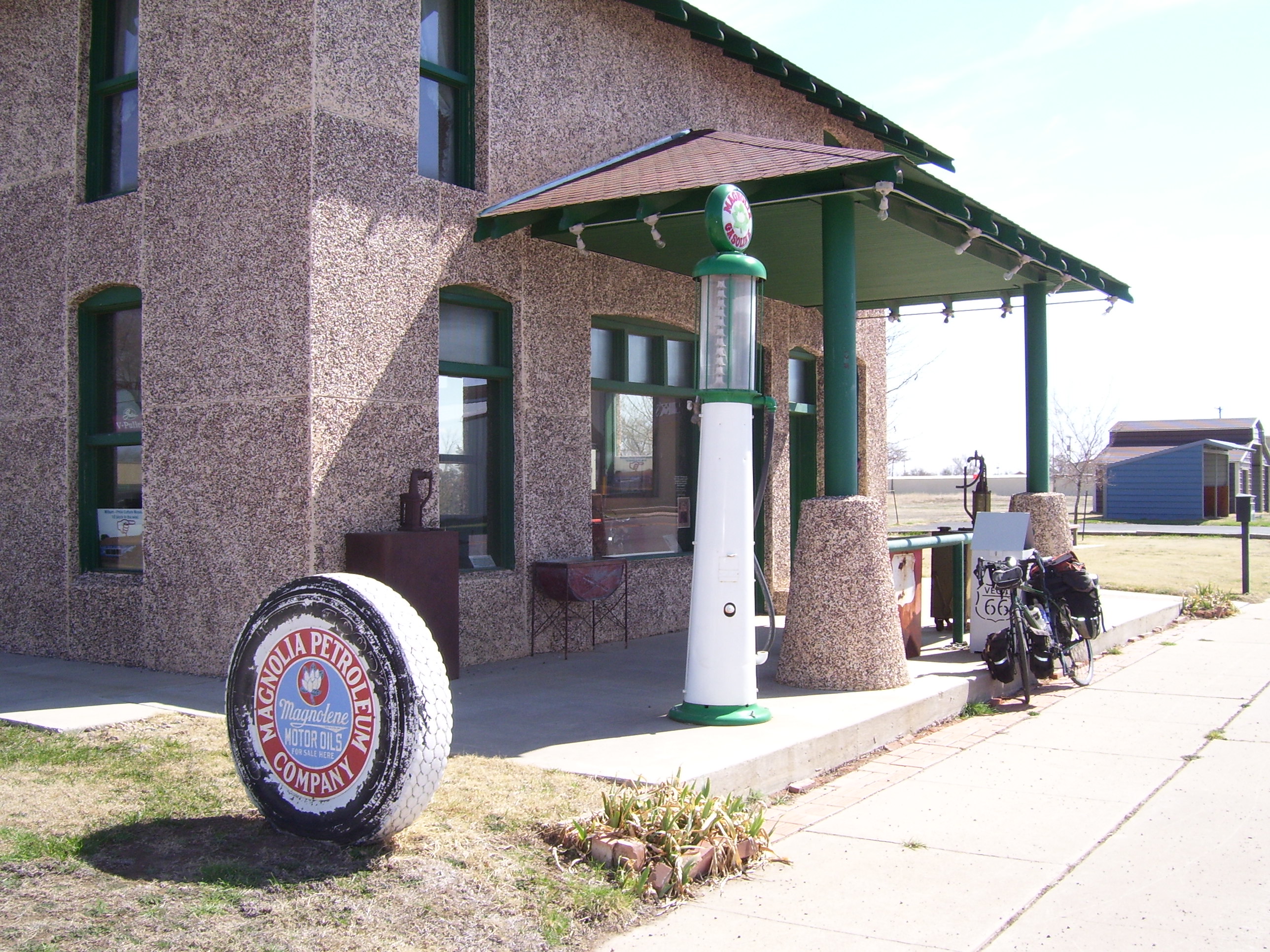 I was grateful for diversions like that because it took my mind off those cruel, relentless headwinds. With terrain like this the cycling should've been easy but the winds made it feel like nothing but and endless climb up a nonexistent hill. A truly miserable experience. This is what the road looked like most of the time, again with the frontage road basically deserted except for me (which is good because the wind kept knocking me around, sometimes almost pushing me off into the grass). 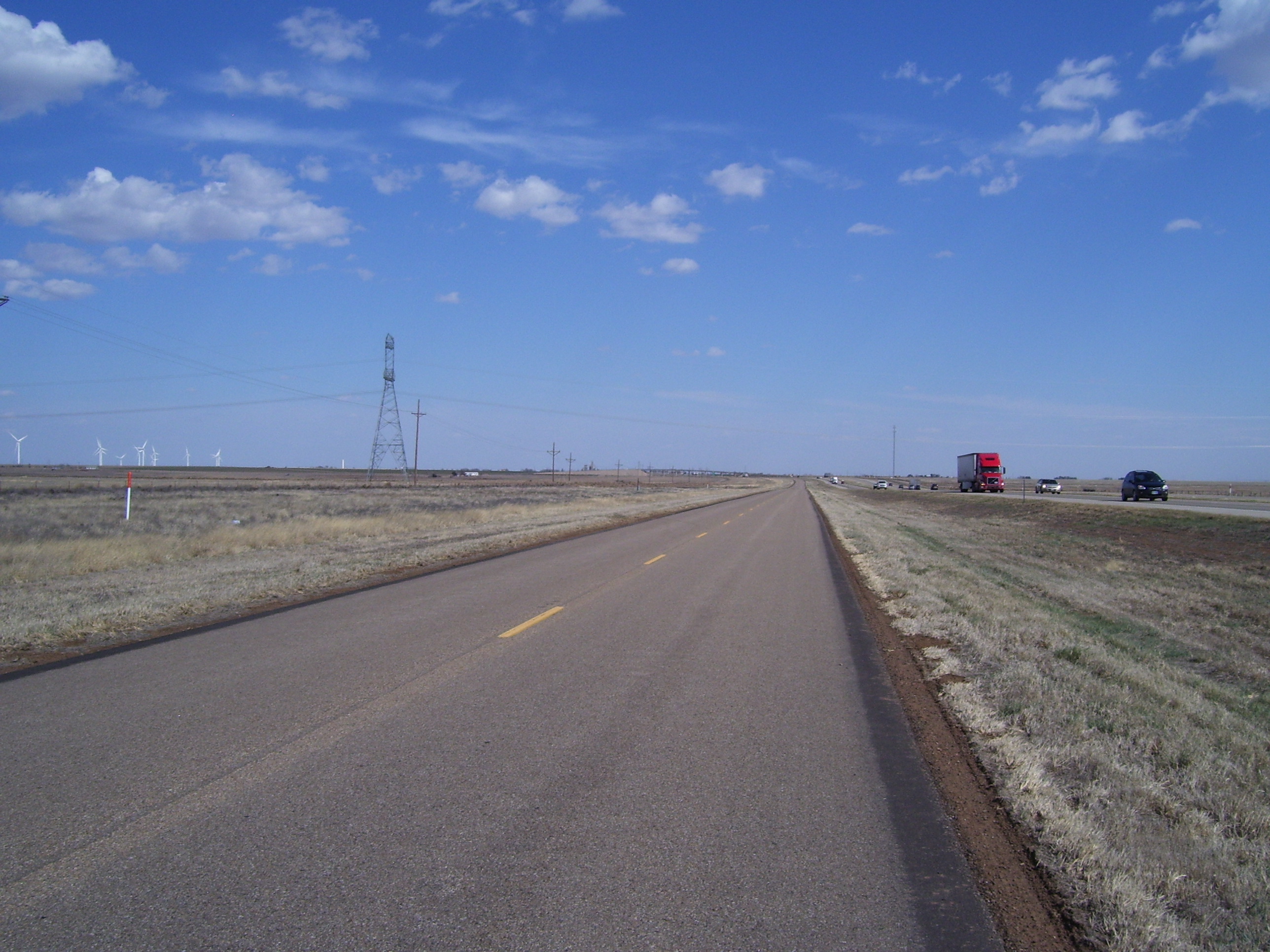 As I neared Amarillo (finally), I found the Cadillac Ranch, which many of you may have heard of...it's where 10 classic Cadillacs are sticking up out of the ground. Apparently the custom now is for tourists and visitors to come out and spray paint them, which is what some of the people in this photo are doing. More on this later. 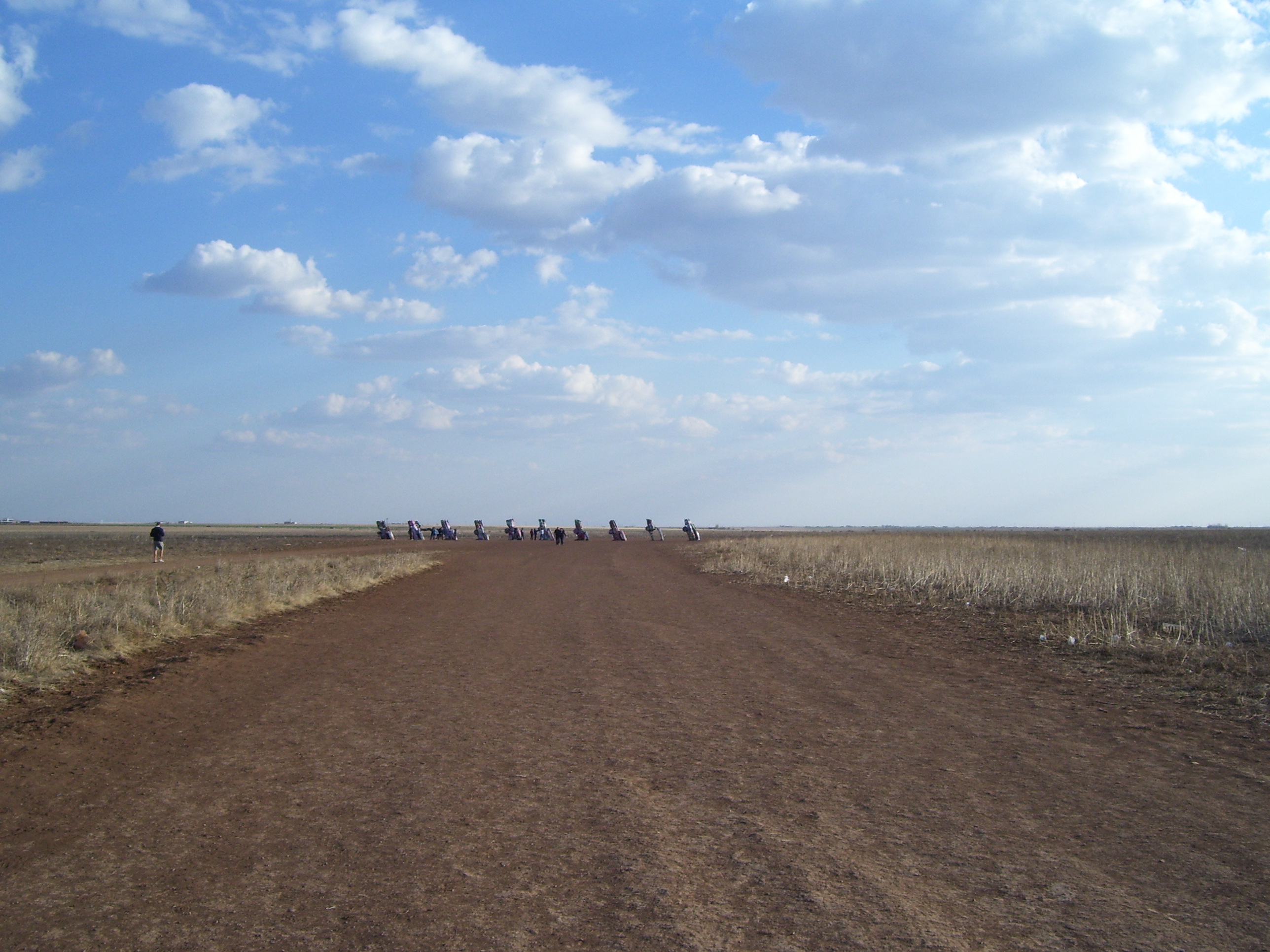 Just a few more torturous miles later I finally reached my hotel, a very nice place that only cost thirty bucks yet has every amenity you can think of. I called my friends from Amarillo Design Bureau, a company I've worked with for over 20 years, and they graciously came out and took me to dinner at a local barbeque place. In fact, here's a terrible photo of them now: Steve Petrick (middle) and Steve Cole (right), the Two Steves of ADB. 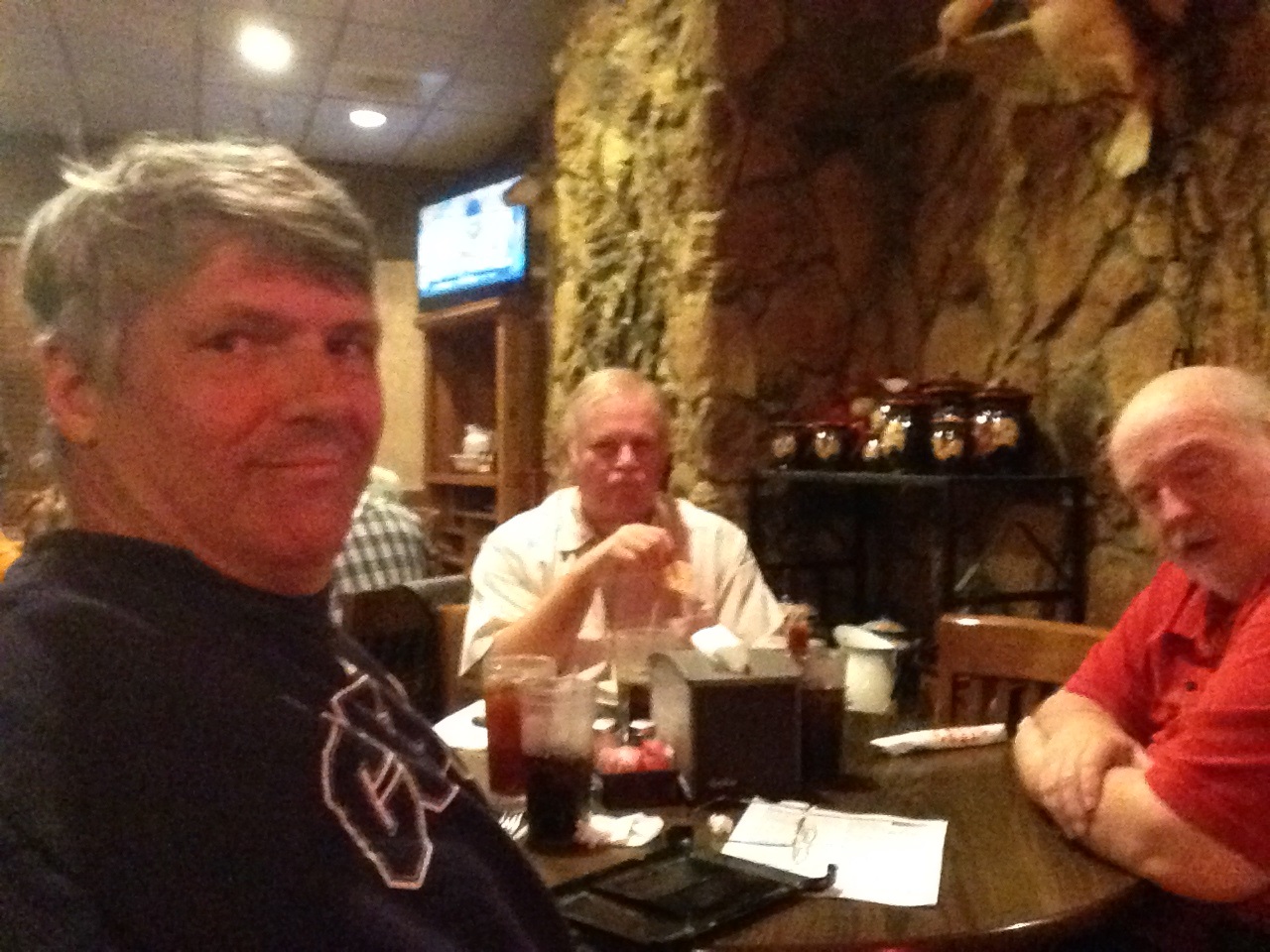 Man, that barbeque was good! I had a plate with pulled pork, sausage, and ham, and it was fanatstic! Thanks for bringing me here! I'll meet them all again tomorrow for lunch before heading out of town, if all goes according to plan. I just hope the winds change...I couldn't possibly take another day like that anytime soon!