Today I had two choices: a short 55-mile run to Collins, or the longer 85-mile trip to Laurel. With light tailwinds in the forecast (a rare treat, having even the slightest tailwind) I figured to try for the longer ride. The main problem: thunderstorms developing in the afternoon. In fact, the forecast said potentially heavy ones in Collins right about 4pm, when I expected to arrive.

One thing about the weather, though...it's often quite accurate, except when it comes to thunderstorms. They can come and go in the blink of an eye. Sometimes you get them when they aren't forecast at all, and other times they warn you to expect them all day and one never shows up. Usually, it's possible to see one coming, though, so even if I'm out in the open, I can come up with at least 10 or 15 minutes to find some kind of shelter before the rain starts. Usually, anyway. Sometimes this doesn't work out so well, as readers of my first cross country trip blog might remember (I tried asking a farmer to let me stand under the eaves of his shed, and he threw me off his property, so I sat in a ditch with an umbrella watching the rain come down in sheets and hail bounce off my bike). Still, I'm not exactly in the middle of nowhere here...I felt certain I could come up with someplace to take cover if a storm caught me before I got to Collins.

I even got moving a little early this morning, just after 9am, and made a quick foray into Brookhaven to have a look around. Here's what their downtown area looks like: 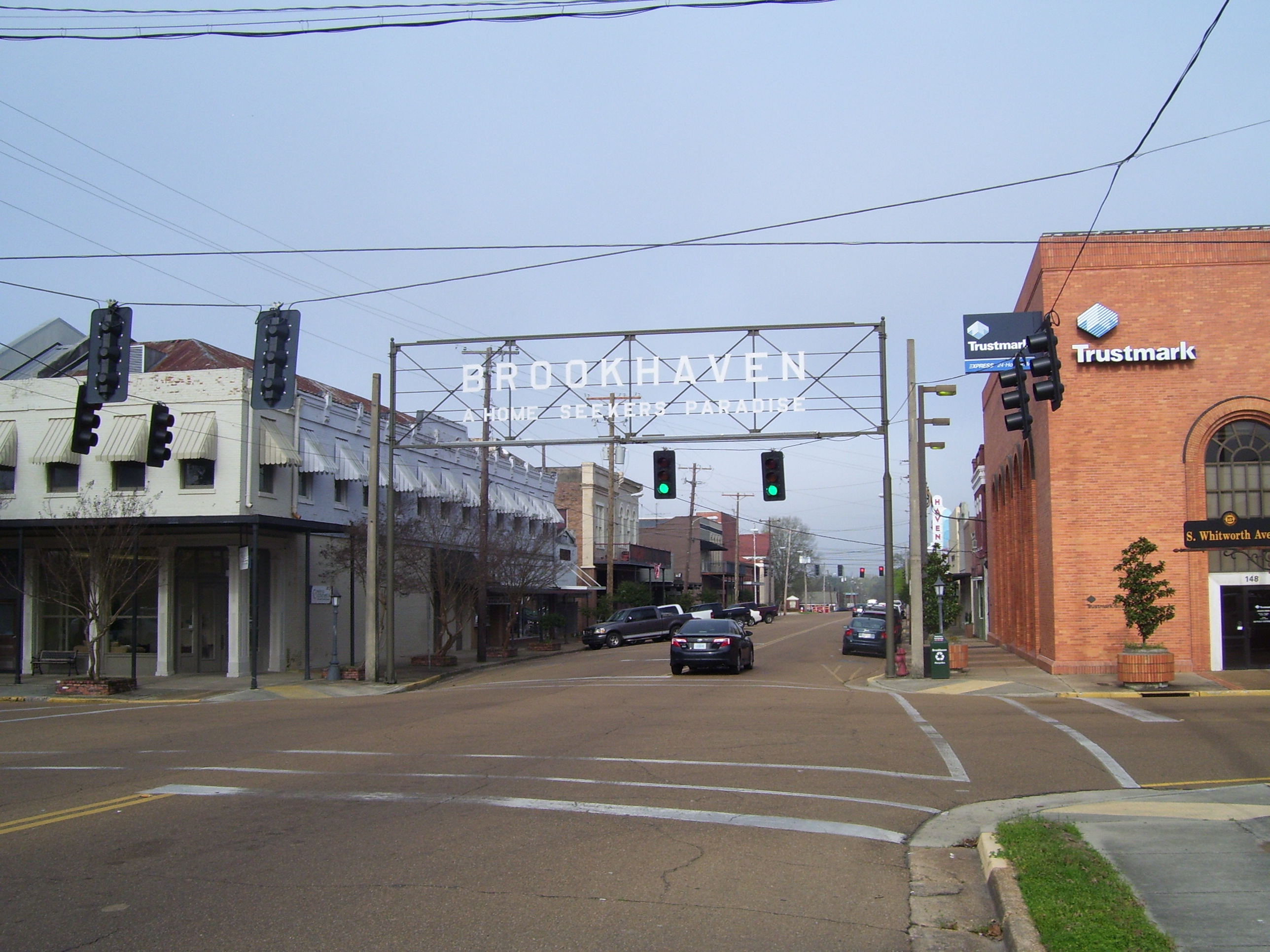 I didn't linger long, though, remembering that I had to make it over a lot of hills today just to reach Collins. I never got above 500 feet in elevation, but nonetheless, gained over 2,000 total feet today...those small hills really add up. Actually, this is the toughest climbing day I've had since those mountains back in Arizona and New Mexico. Honestly, though, the smaller climbs, followed by descents that let you rest your legs, really aren't that bad. Even with all that climbing I never had to shift gears. I've gotten used to standing up often to power over parts of the climbs (although I'm never able to make it over the whole thing, at least that gets me out of the saddle).

But back to this morning's start. As soon as I got out of Brookhaven, I rejoined US-84 (which it looks like will be my road of choice for a while) and found it under construction. In fact, things looked pretty grim as the shoulder was nothing but dirt, the left lane was blocked and the right lane had just been resurfaced. How was I going to ride on this if nobody could pass me and I couldn't move over to let them go by? Quite a dilemma...especially since I really didn't have any alternative routes available. 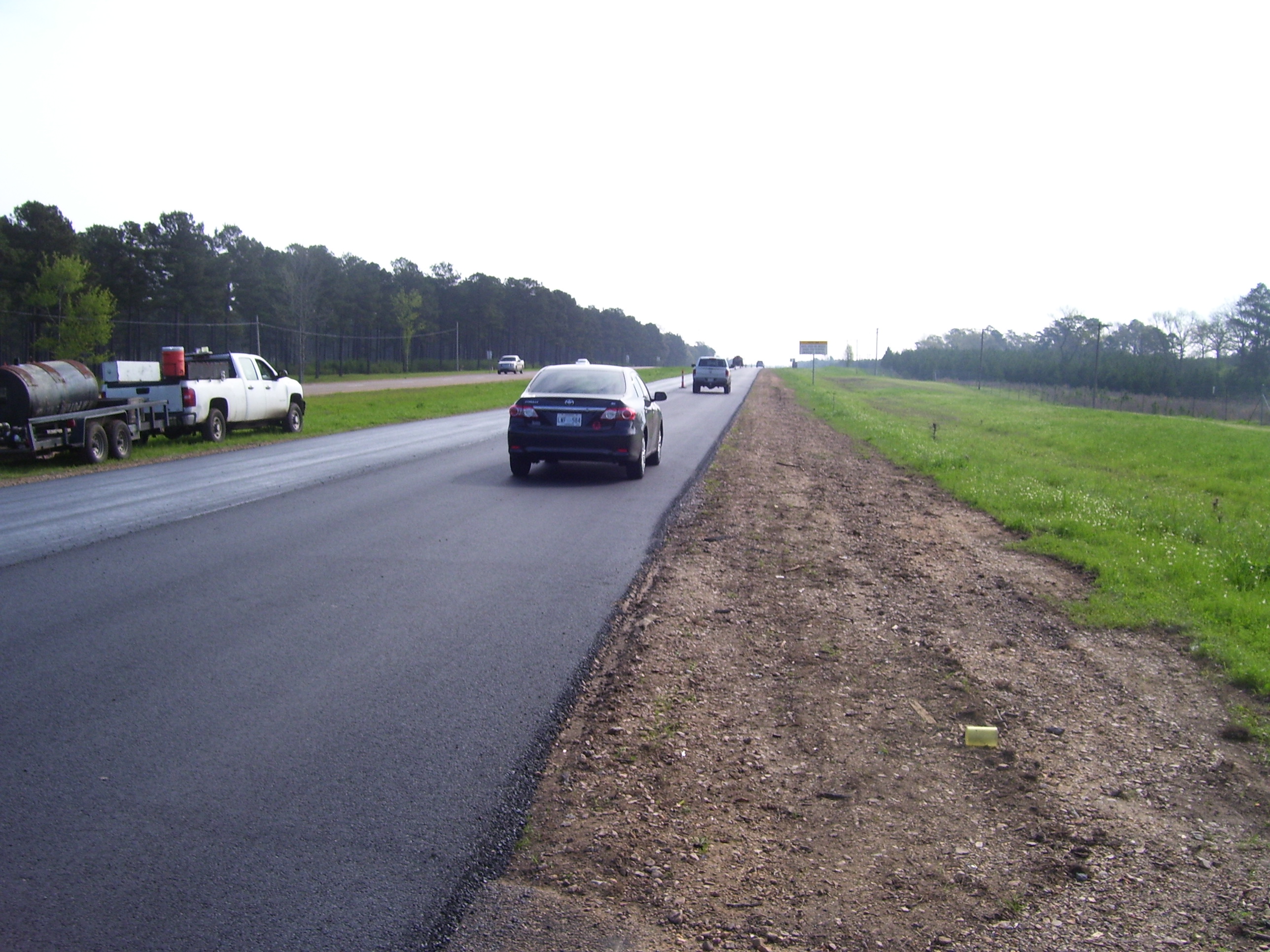 All I could do was wait for a break in traffic and then ride on, watching over my shoulder for approaching cars and pull over to let them pass. But that only lasted about a mile. Then, the left lane (still blocked, I should point out) cleared up. They'd been putting down a tar layer there, prepping it for resurfacing, but I'd reached the end of that area, so now I got the idea to just ride on the left-hand side. So that's what I did. This went on for quite a few miles, too. It felt weird being on the wrong side of the road like that, but I had the lane entirely to myself so it was about the safest I felt all day. 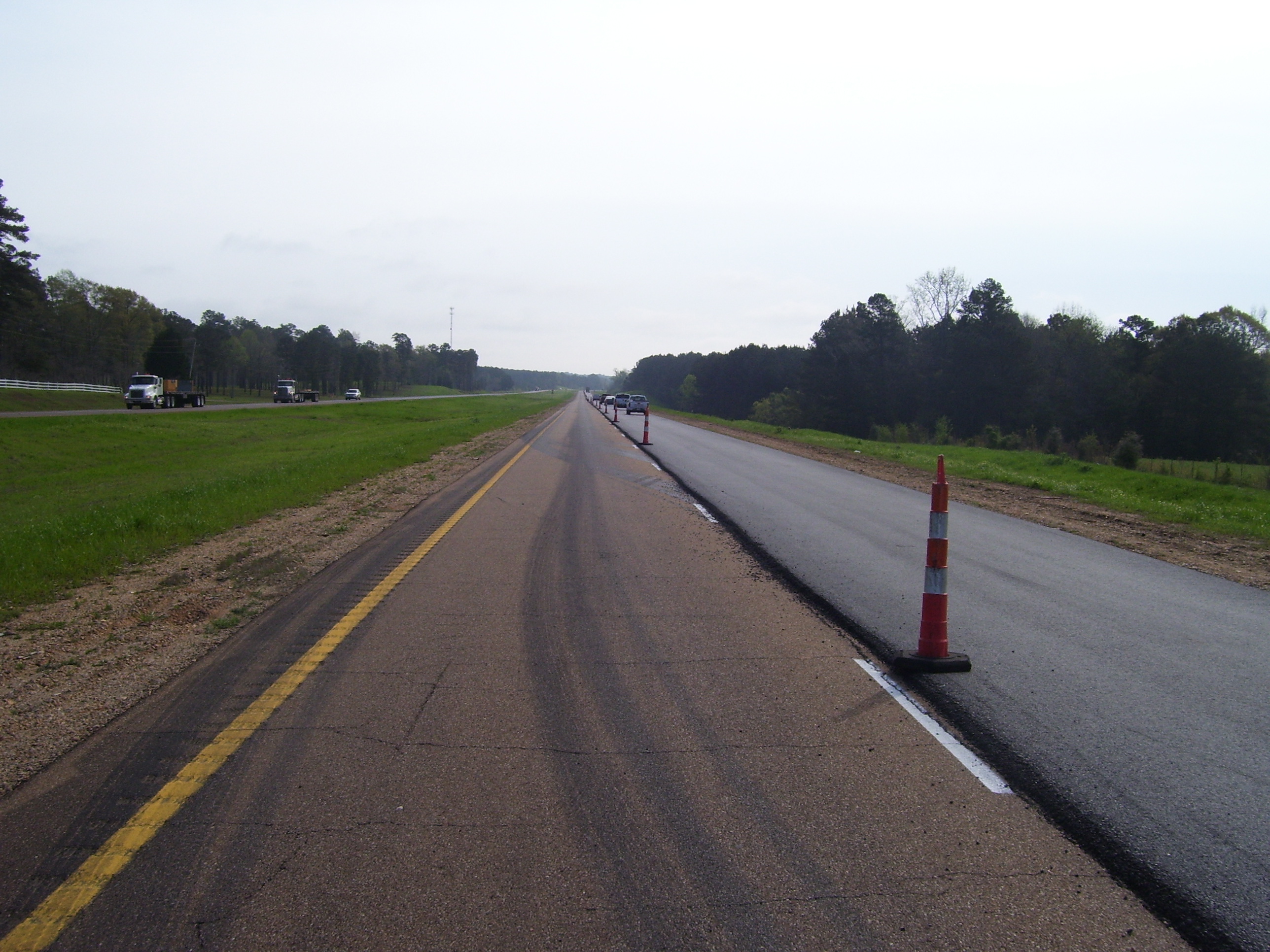 Of course that had to end, but it was fun while it lasted. After that I spent the whole day on the right side of this four-lane divided highway, with no shoulder at all (I guess the state of Mississippi doesn't believe in shoulders). I never had any problems with drivers, though, and the rare truck that came by (usually hauling pine tree trunks) gave me plenty of room.

Along the way I passed some more amazing looking homes on massive lots...here's another example. This is what it's like if you're wealthy. 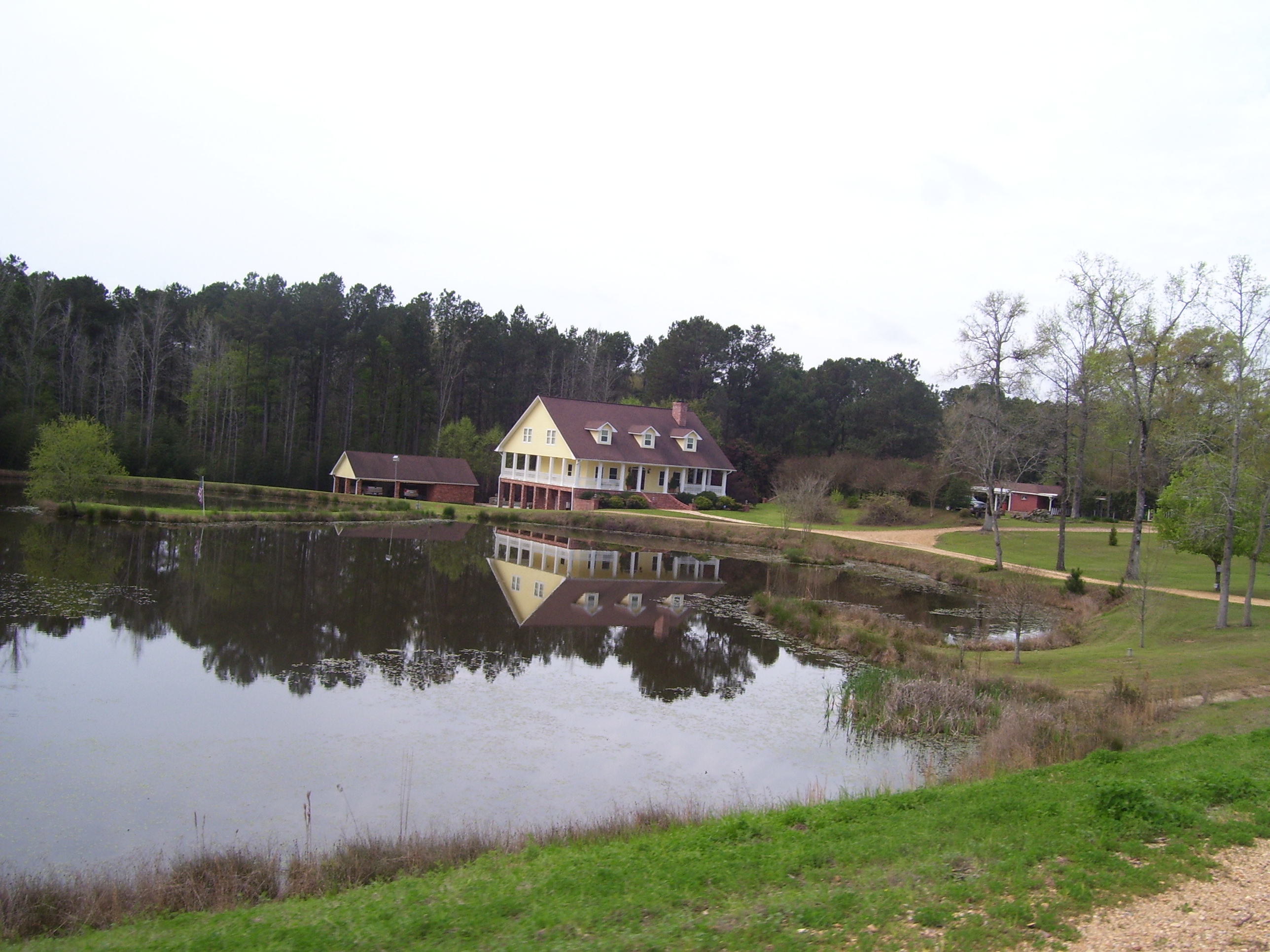 Private residences weren't the only nice-looking structures I ran into, either. Check this one out. It looks brand new. 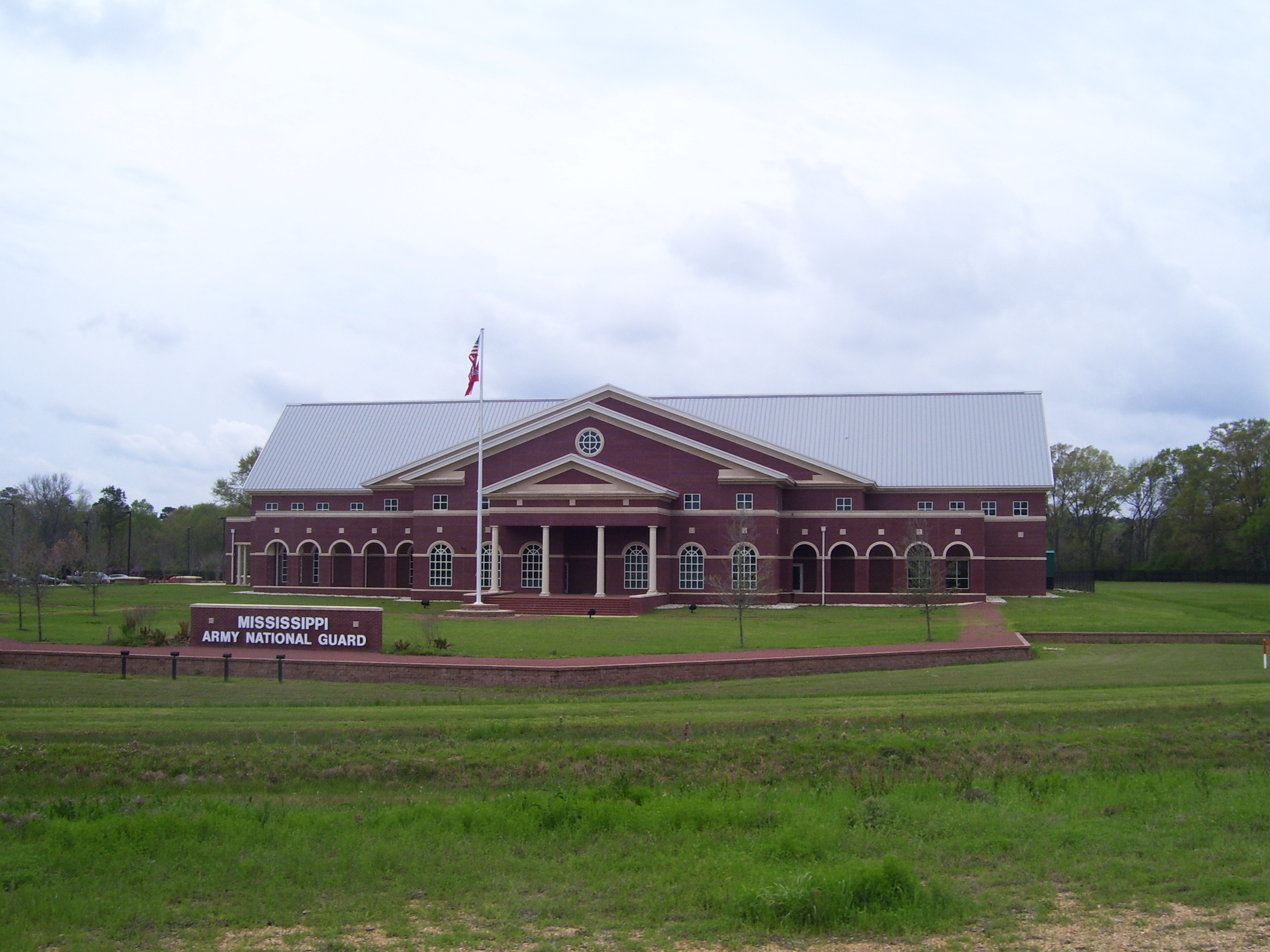 Most of the terrain was forest, with a few small lakes and swampy areas lingering on, like this one here. However, the marshland is starting to get pretty rare. 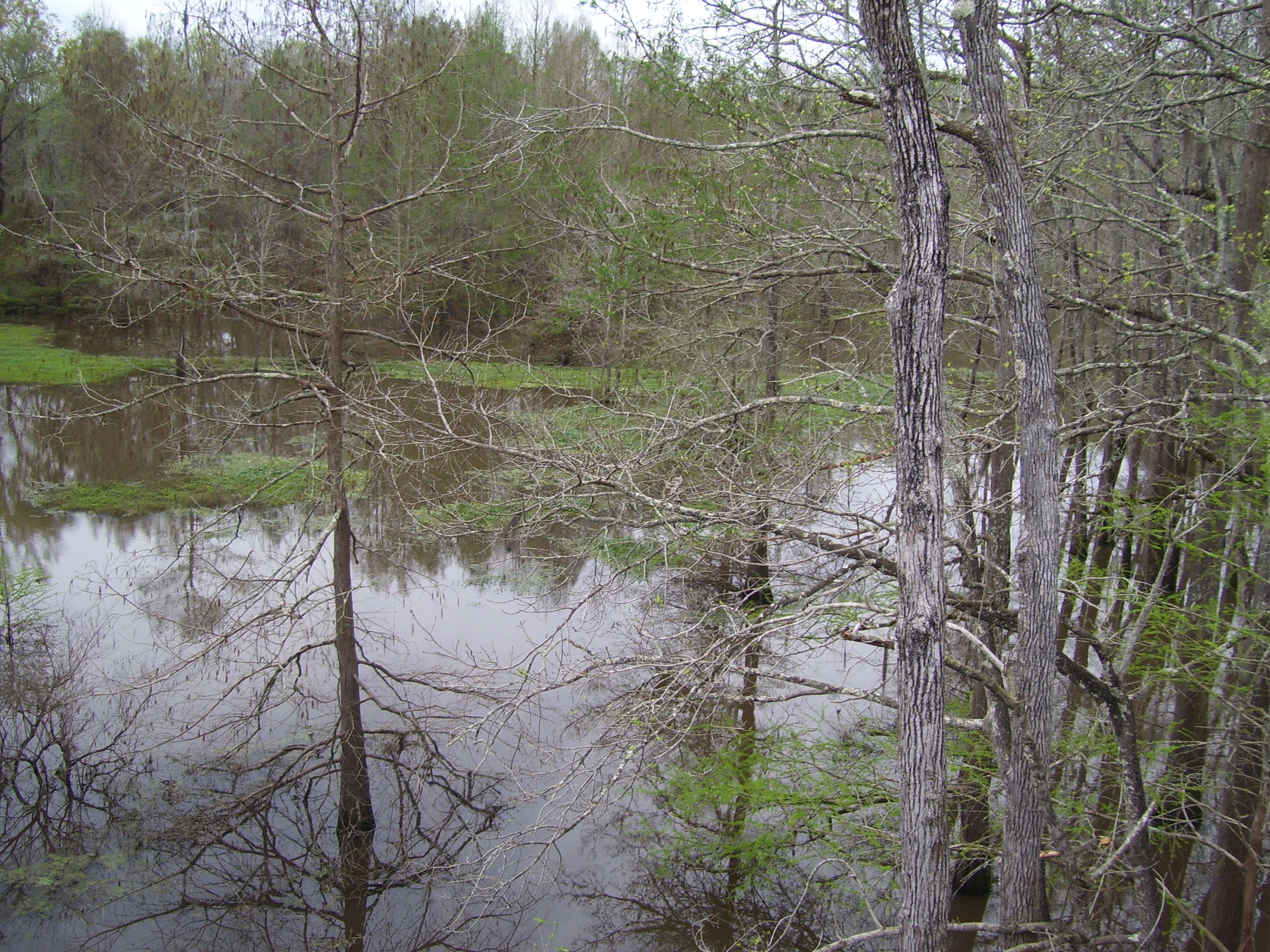 Along the sides of the roads I frequently see these giant thistle blooms...these stand about thigh high and while I know they're weeds, I still think they look pretty cool. 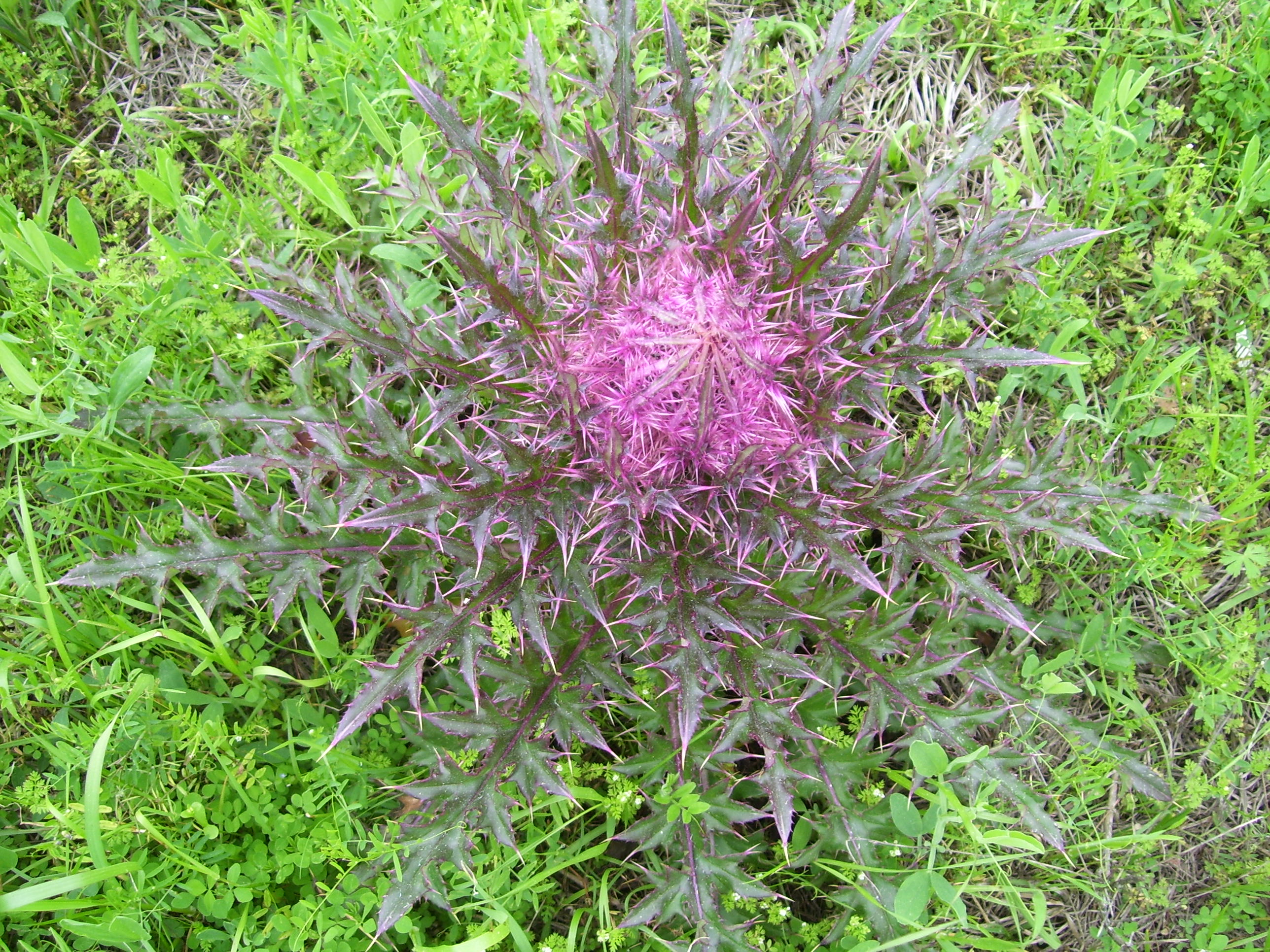 From the "strange sign" department, here's something I've been seeing fairly regularly...roads marked as load limited to exactly some obscure looking huge number. What's so special about 57,650 pounds? "Sorry, boss, I was going to deliver the pallets like you said, but the truck weighed in at 57,665 pounds and they wouldn't let me on the road." How strange. 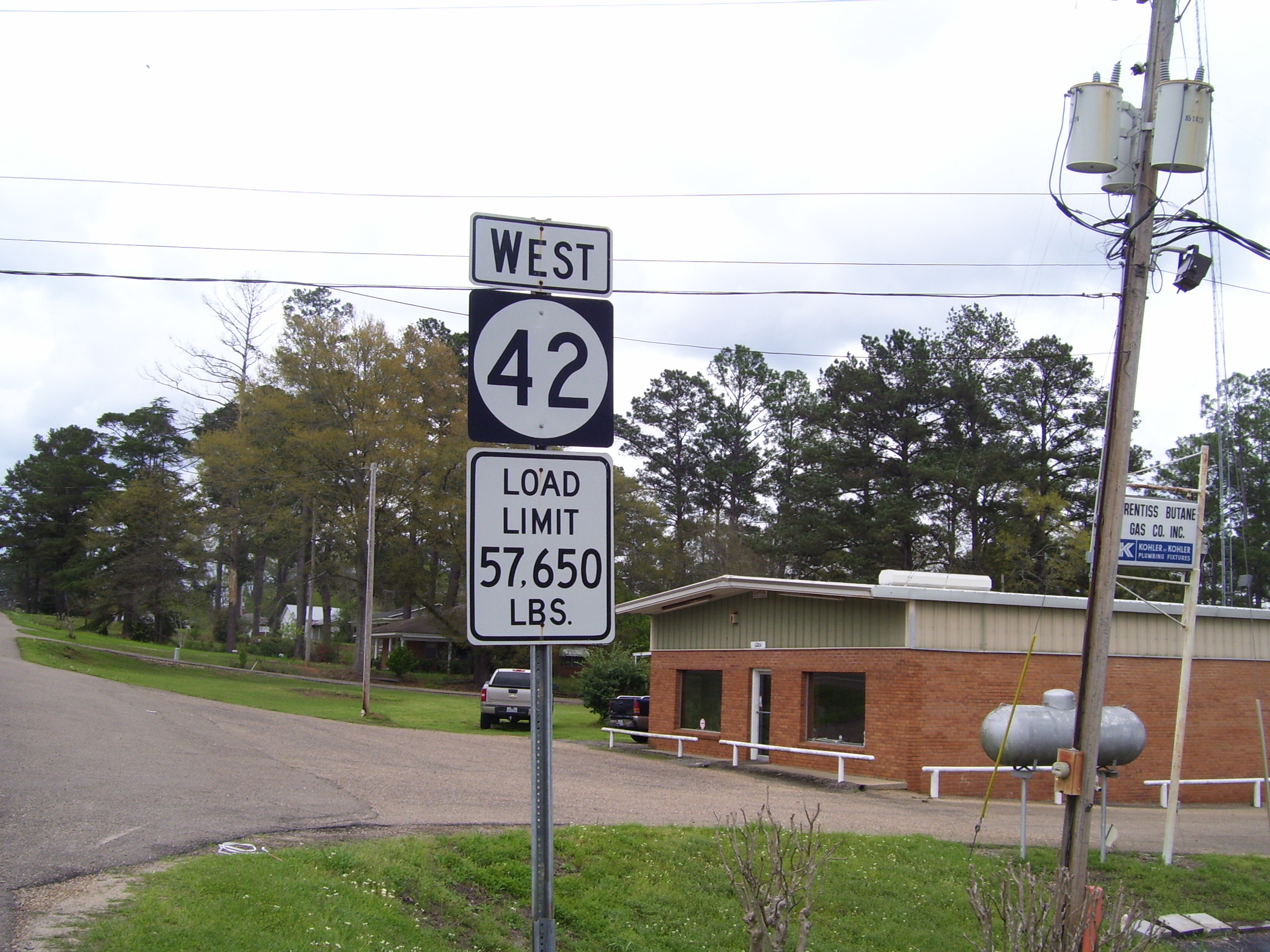 Throughout the afternoon the road wound through some very nice terrain, often climbing quite a bit but never for long. Here are a couple of shots of typical views from my perspective today: 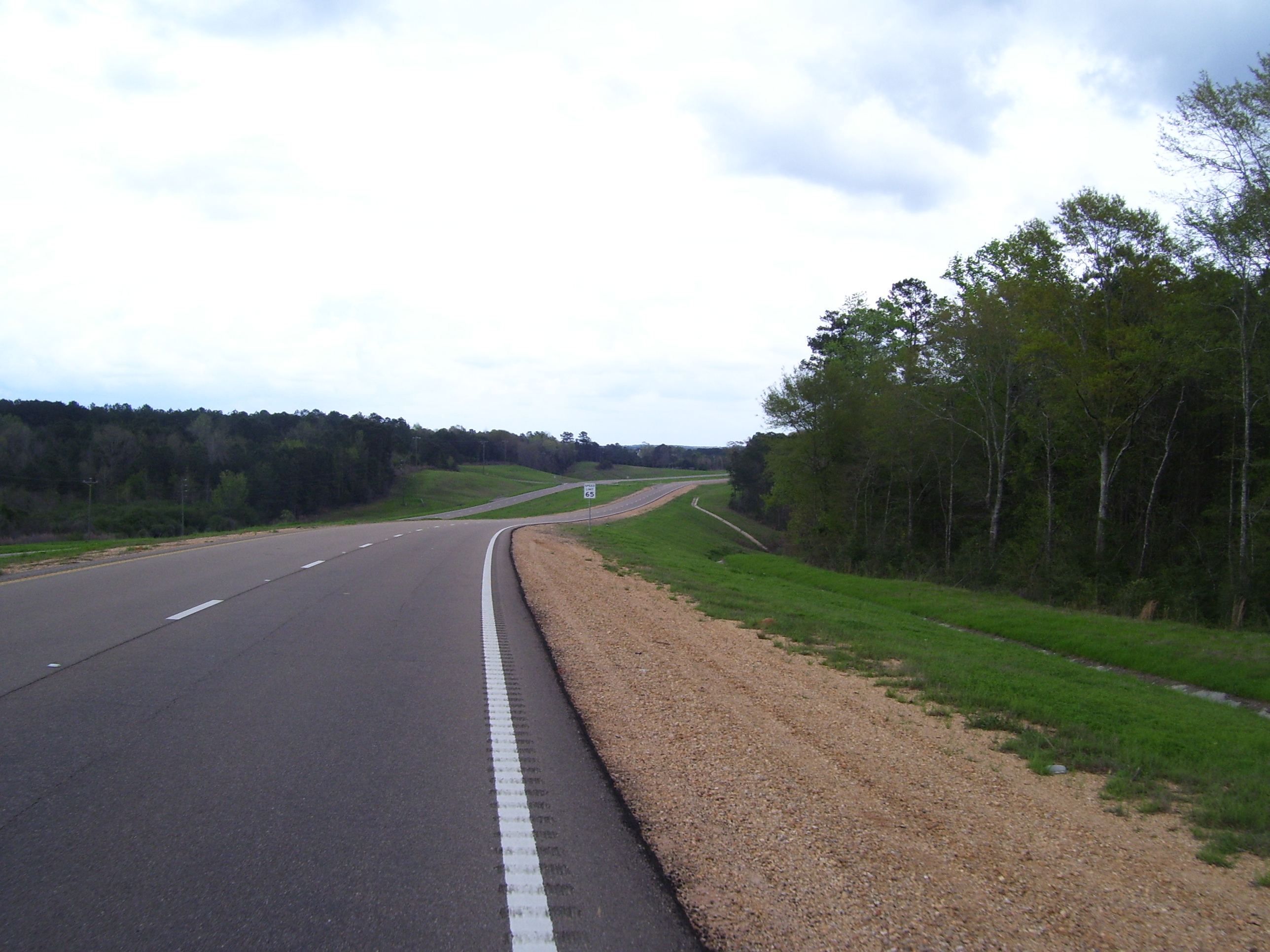 In this one notice how the road curves off to the left, then back to the right and you can just see it poking up through the trees in the distance. That's typical of today's climbing...never very far, just a quarter mile, maybe half a mile, then back to a descent or straightaway. Totally manageable, and with a light tailwind, not bad at all. Honestly, just having a day where I didn't have to fight the wind made everything else bearable. 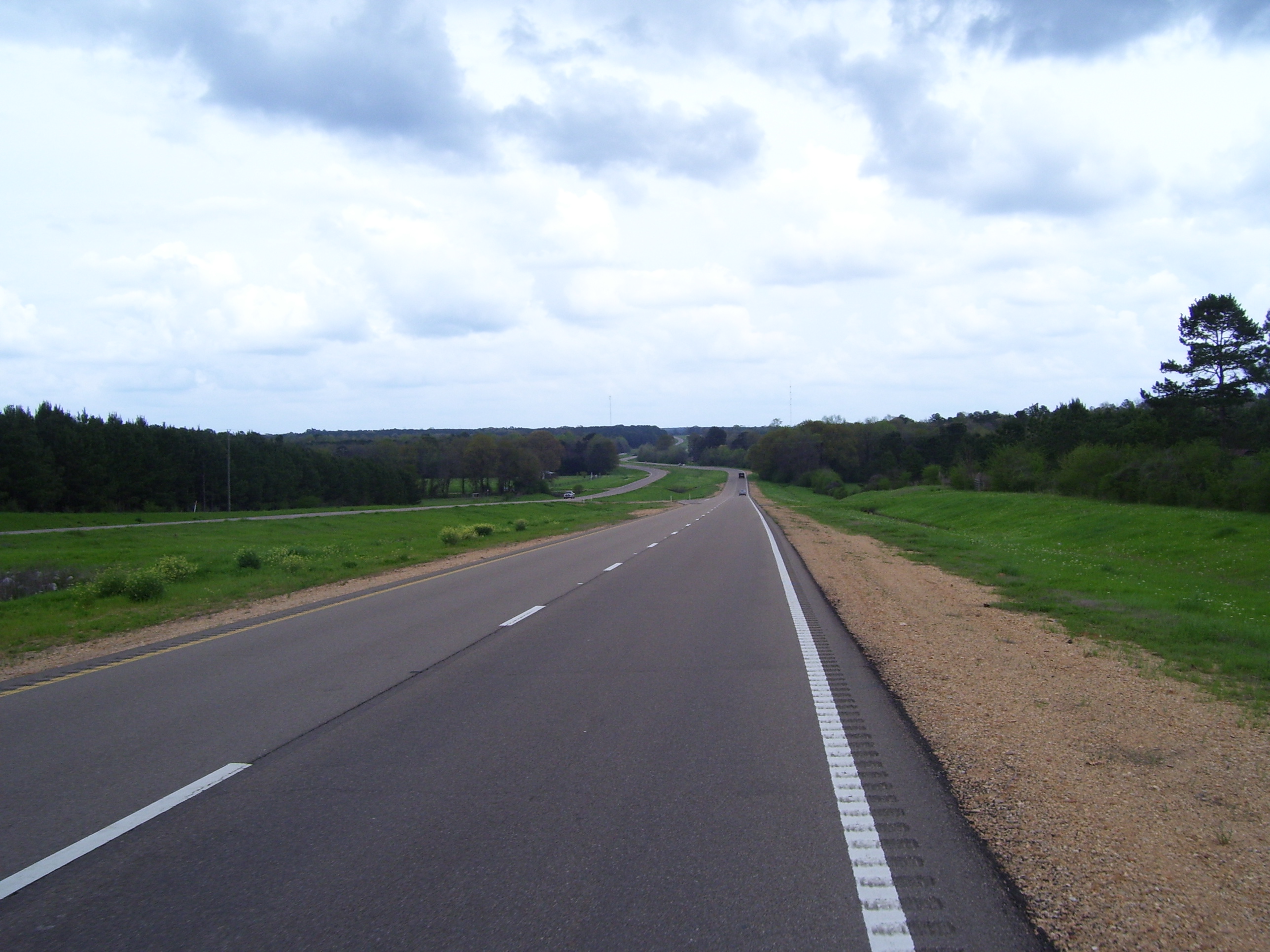 As I moved on, I kept watch over my left shoulder, and sure enough the clouds started gathering back there. I took this photo looking back behind me as I reached a point about 5 miles from Collins. You can see the rain already falling back there. I guessed that this was maybe 15 minutes away from catching me, and so I hurried...and the downpour started just as I hit the outskirts of town. 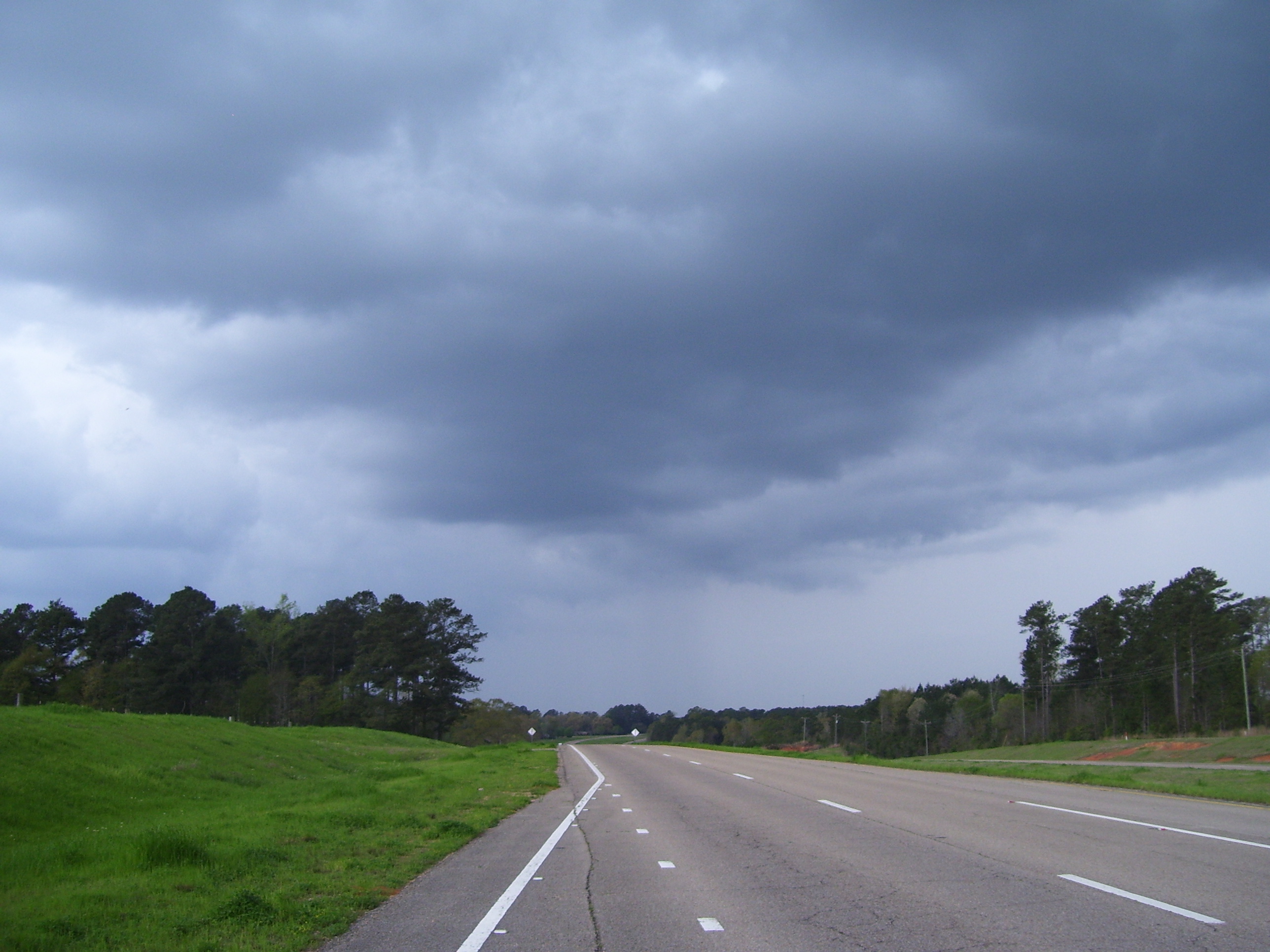 I managed to find shelter in the front doorway of a small building that was already closed for the day, where I watched the rain come down for a bit, and listened to the thunder rumbling away. The temperature dropped about 10 degrees so I put on my jacket, and left it on the rest of the afternoon. 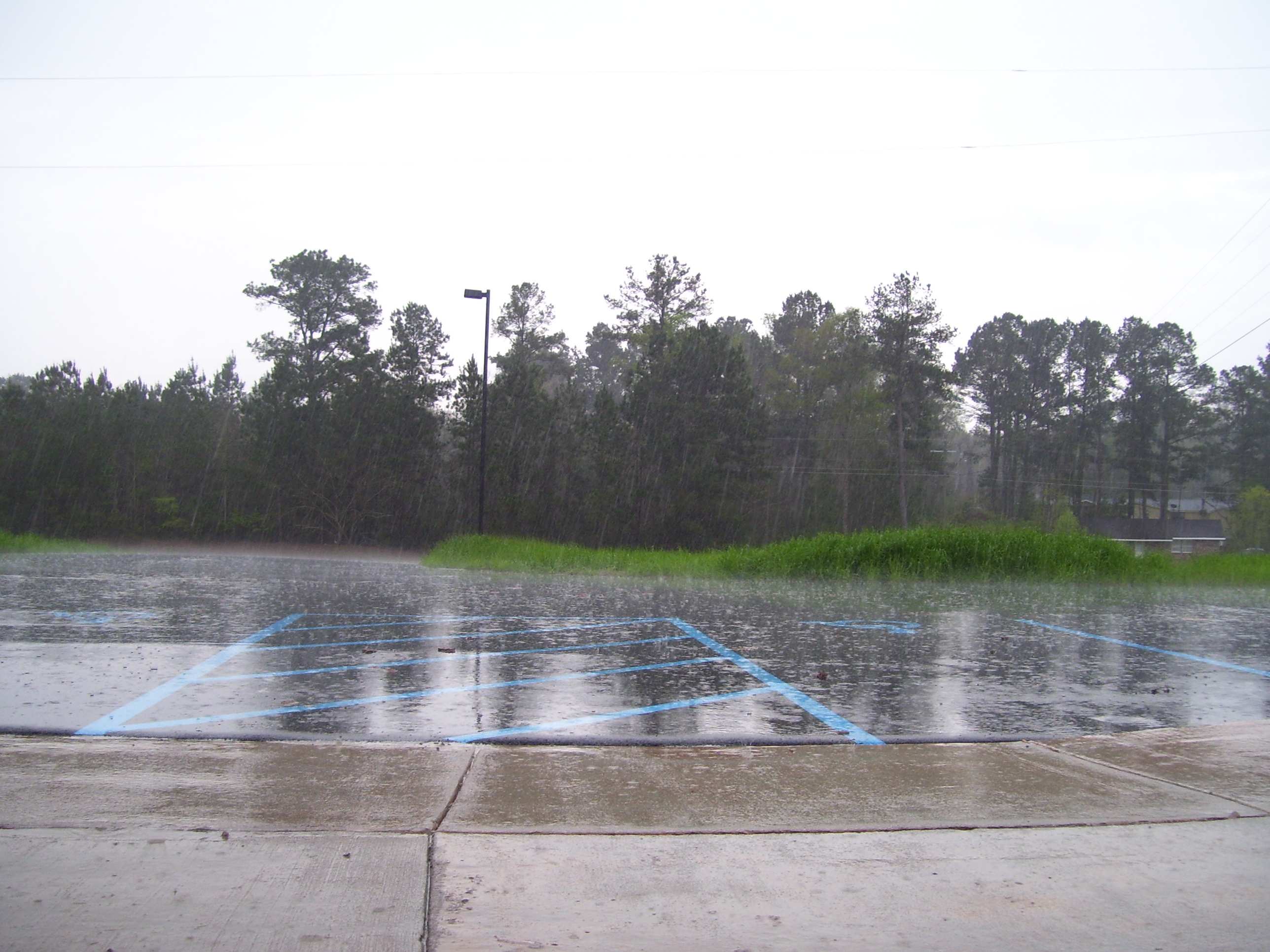 The storm wasn't all that bad, and passed by within about 15 minutes, but the rain didn't stop. I continued to experience anything from light drizzle to moderate rain for the next couple of hours. With three and a half hours of light left, and the thunderstorms not looking all that bad on radar, I decided to chance it and make the run to Laurel. This worked out quite well as I made it with plenty of time to spare, didn't get all that terribly soaked, and milked an extra 30 miles out of that tailwind. I've seen so few of those, I really need to take advantage of them whenever I can. Anyway, here's one last view of the road, with an actual decent bit of scenery visible through the trees ahead. 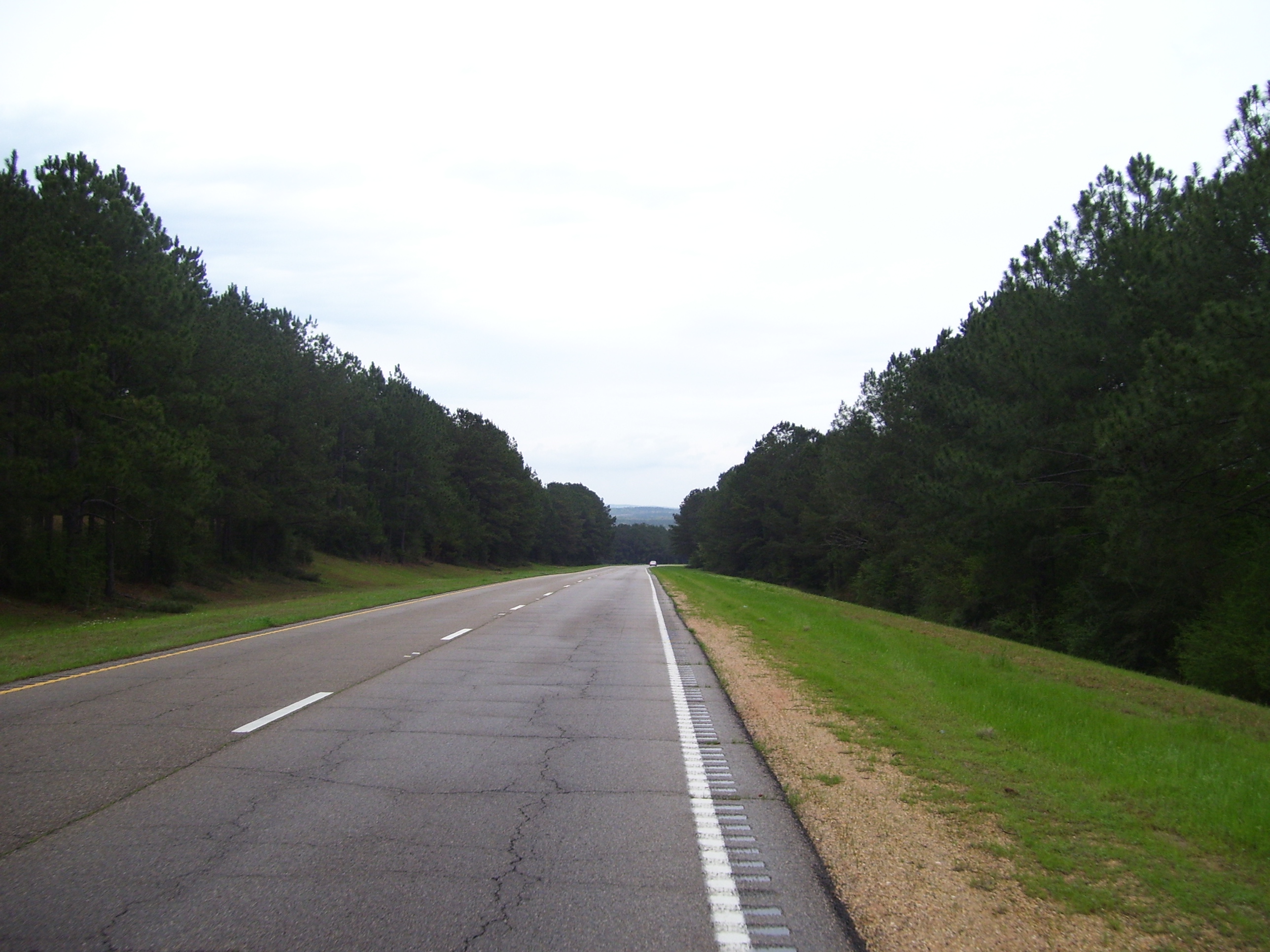 Upon reaching Laurel, the rain slowed to a faint mist and I took some extra time to ride around checking hotel prices, which saved me about 20 bucks when I stumbled upon a motel not on Google Maps, and not in my coupon book, that only wanted $40 (including tax). Plus they were right next door to a Popeyes, so I dined on fried chicken this evening, which really hit the spot.