Today I had a rare "free" hotel breakfast waiting, but since they served it until 10am, I didn't have any reason to hurry. Instead I just went through the usual morning routine, figuring I'd grab a bite on my way to the road, and check out at the same time. So I did everything I normally do in the room except pump up the tires, because I might as well do that right before setting off so they stay at full pressure as long as possible. The front tire has developed the tendency to drop 50-75% of its PSI overnight, so it's definitely got a very slow but manageable leak somewhere (not worth fixing since I always top off the tires every morning anyway).

So I had everything figured out, or so I thought, because as soon as I stepped out of the room I realized something was wrong...my rear tire was completely flat. I know I complained about flats quite a bit earlier in this ride, but I haven't seen one in a very long time now. I guess I was due for one, I just didn't expect it to show up before I even got on the road! Turns out a tiny (and by that I mean truly miniscule) piece of wire lodged itself in the tire and punched its way through to the tube, probably sometime in the last 5 miles I rode yesterday...just enough that it wouldn't go flat on me until I got to the room. In a way I suppose I should be grateful it didn't show itself while I was on the road, but still, flats are annoying no matter when you get them.

Anyway, I had breakfast as planned and fixed the flat afterward (so my hands weren't covered with road grime before eating...that stuff can be hard to wash out sometimes). The wire was so tiny I almost couldn't get it out...sort of like a splinter stuck in your finger that you just can't quite seem to get a grip on, even with tweezers. Finally I coaxed the darn thing off my tire, patched the hole and put everything back together. That's the 5th patch on this tube, by the way. By the end of the day, it was still holding full pressure, too.

Even with all of that, I still set off before 10am, so it's a good thing I got up early this morning. The planned low-mileage target city of Brookhaven looked like the logical choice for routing, with the only easterly option being another 35 miles away (meaning I'd need a century, which wasn't going to happen with winds out of the south and lots of hills looming). I did have another possibility: Hazlehurst, located about 25 miles north of Brookhaven, with a couple decent hotels and partway to the US-80 corridor. However, it made no sense to try for Hazlehurst unless I could take the angle towards it...going all the way to Brookhaven and then heading due north was a waste of mileage. Google Maps showed a possible angle so I decided to check it out when I got to the option point, about 3/5ths of the way through today's ride. Going to Hazlehurst would make today's trip about 80 miles, which seemed doable.

By the way, there are basically two routes I can take from here on: US-84, which runs east to Savannah, or US-80, which is further north of here, and runs east directly to Charelston. Both routes are about the same length, but the 80 route goes through bigger cities, which I'd rather avoid, so I'm not going north to that corridor unless the winds insist AND I can get a decent angle to head up that way. Like I said, going due north just to get to US-80 is really counterproductive.

So with all that said, I headed out. US-84 turned out to be a 4-lane divided highway with nonexistent shoulders, so I decided to take side roads whenever possible. At several places I came to little bits of "Old US-84," which used to be called the Lone Star Trail, and took the opportunity to ride over there as much as I could. For one thing, the scenery was better...check out this pretty stretch of road: 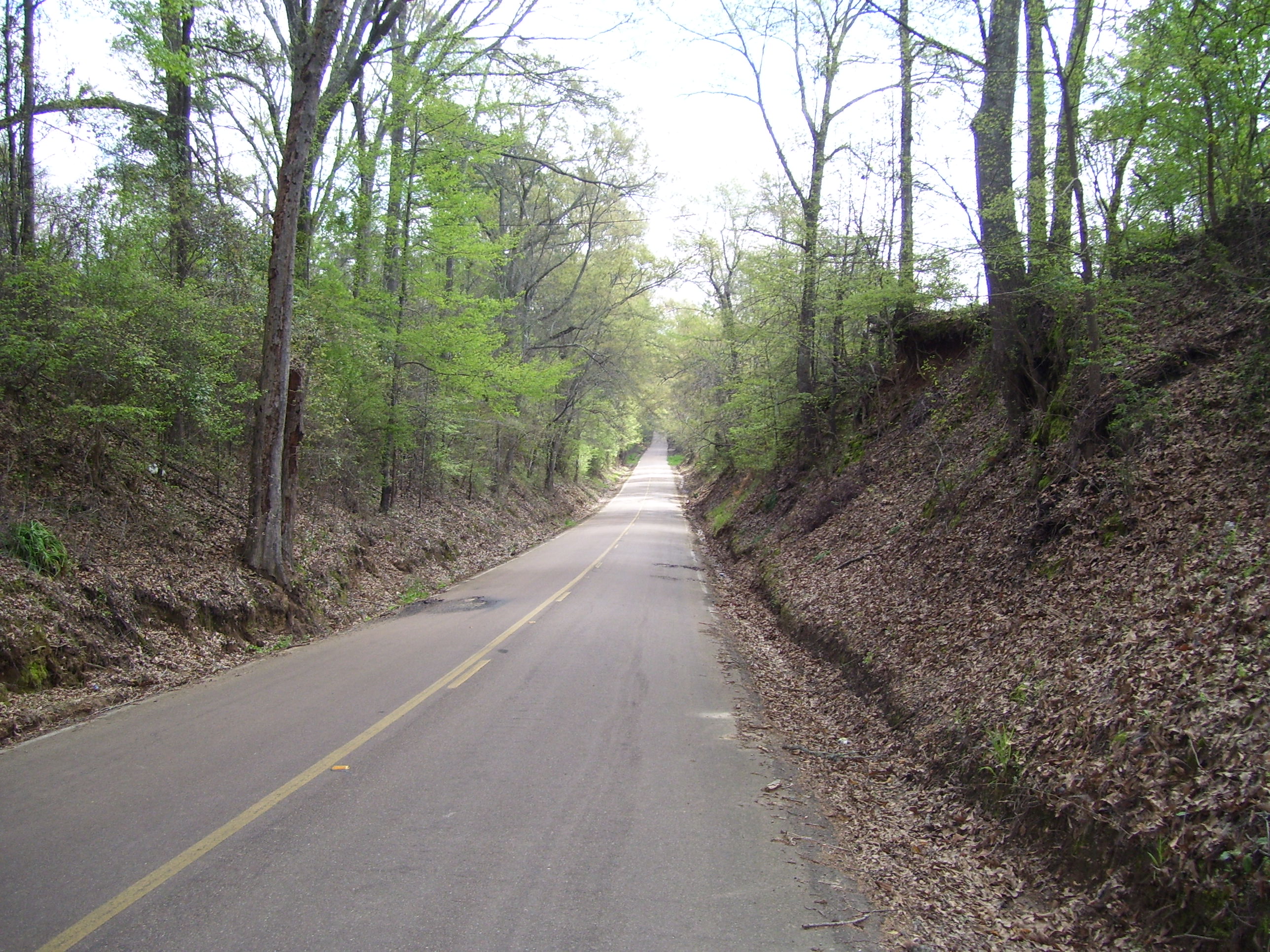 And completely deserted, too. Not one car ever passed me whenever I took these side roads. I did run into one problem, though...see this section here? 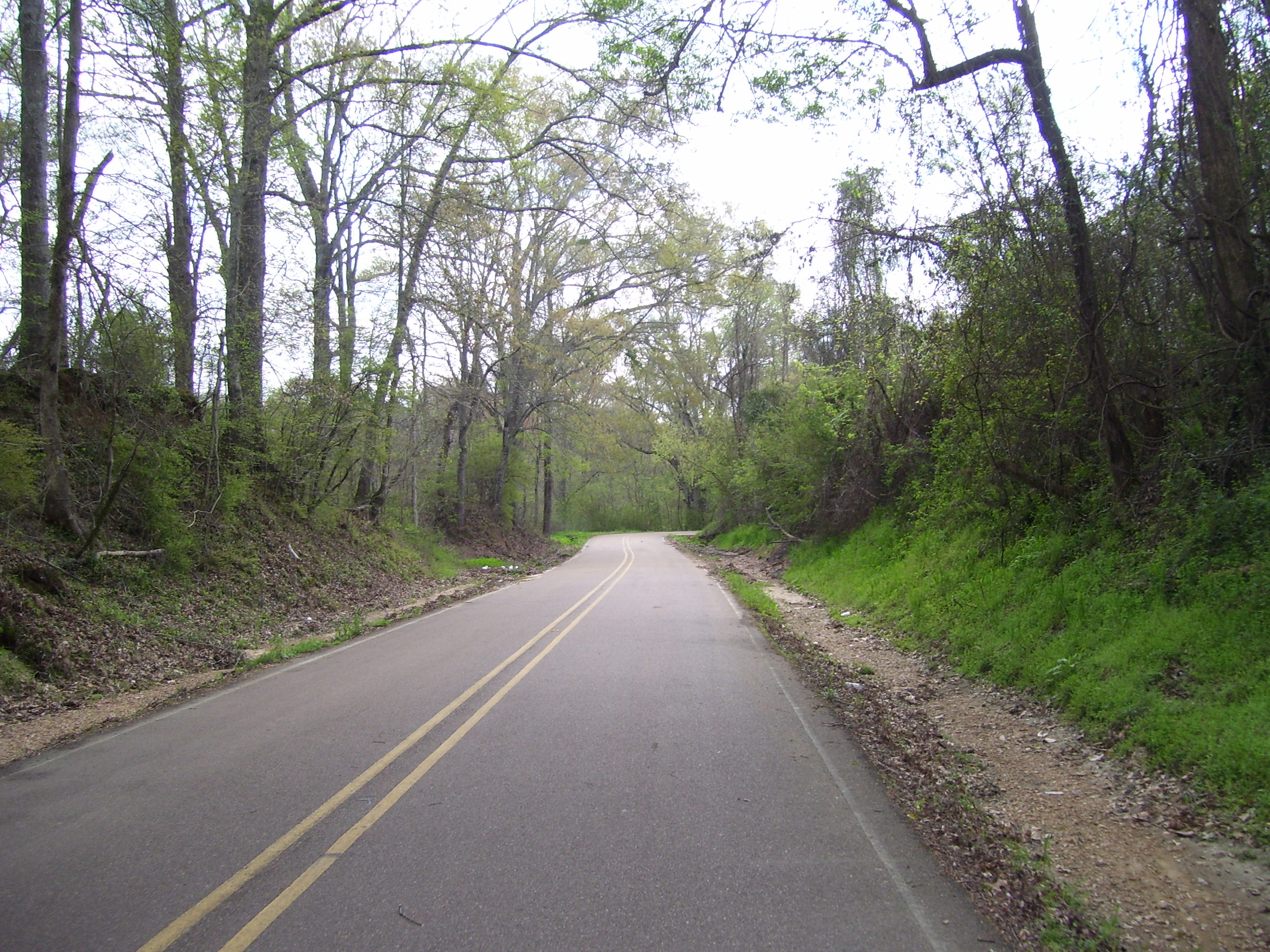 Notice how it bends off to the right. Well, according to my GPS, it's not supposed to do that. This section of road was supposed to continue straight and link back up to US-84, which it didn't, so I had to backtrack about half a mile. Ah well, you pays your money and you takes your chances, I guess.

Anyway...another problem for today was the lack of any facilities along the way. I rather hoped I wouldn't get hungry enough for lunch after downing a waffle and some orange juice for breakfast, but the constant hill climbing and wrestling with the pesky southeast winds (yep, east winds yet again) made my stomach start rumbling. I thought about having cookies, but held out in the hopes of finding a truck stop or something...then finally I came upon this little shack in the middle of nowhere: 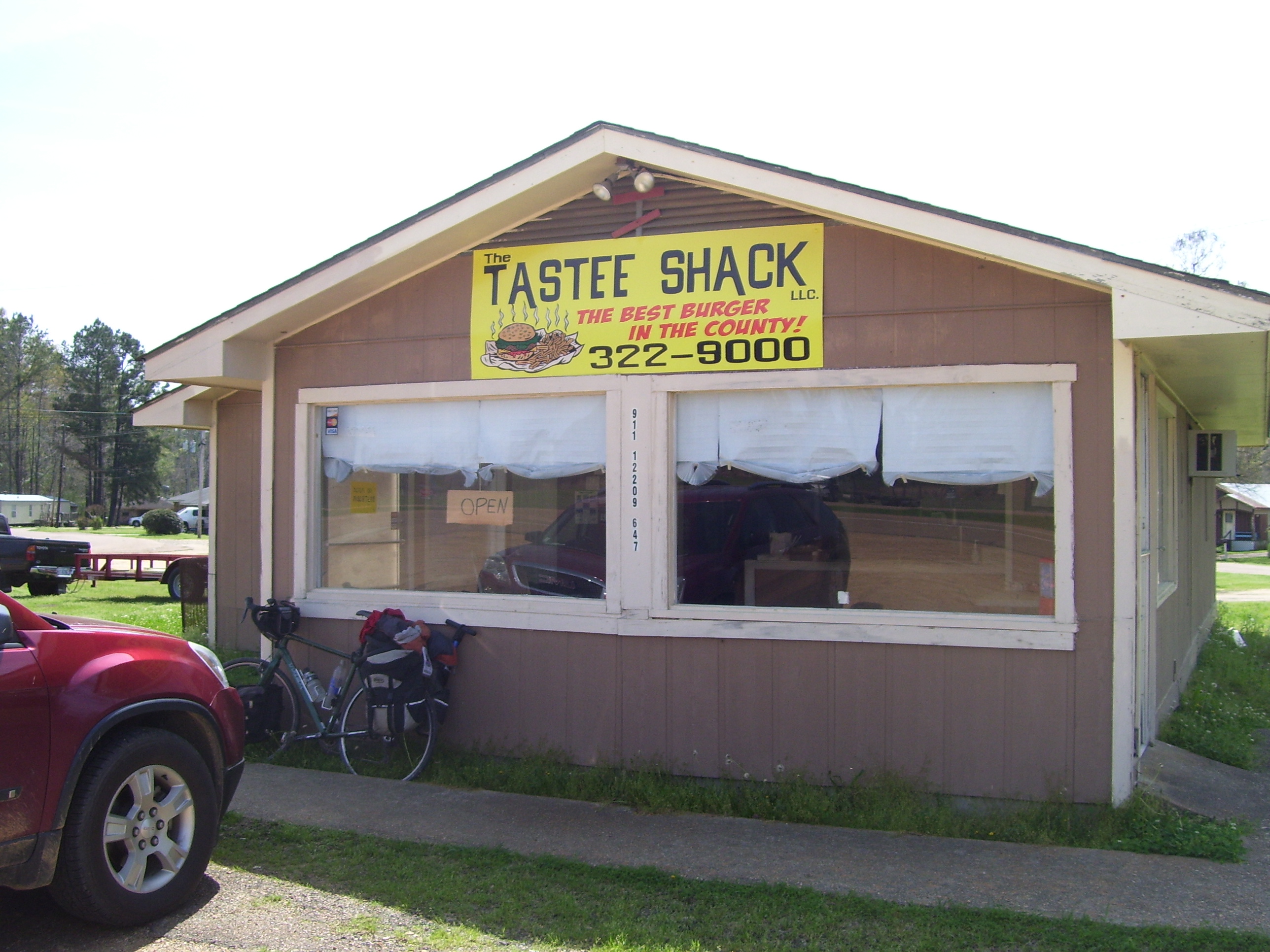 Well, not nowhere, I guess, as there was a small trailer park, and a tiny village down the street a bit, but still, this is all I got today. I never saw any other food places anywhere along the route, except a couple gas stations. Fortunately, the Tastee Shack really did have a pretty good hamburger. Expensive, but pretty good. I'm glad I stopped.

The rest of the day featured almost exclusively US-84, which looked like this...four lanes, divided, with the world's tiniest shoulder. I amused myself a few times by trying to balance in that little one-foot-wide path without hitting the obnoxious rumble strips. For the most part I succeeded, but trucks going by in the right lane could mess me up, and whenever I left the tree cover, the crosswinds from the right would make it much harder. I scored bonus points by being able to stay in the path while standing and powering over a hill, or by getting water from a water bottle and replacing it safely. Not as easy as it sounds! 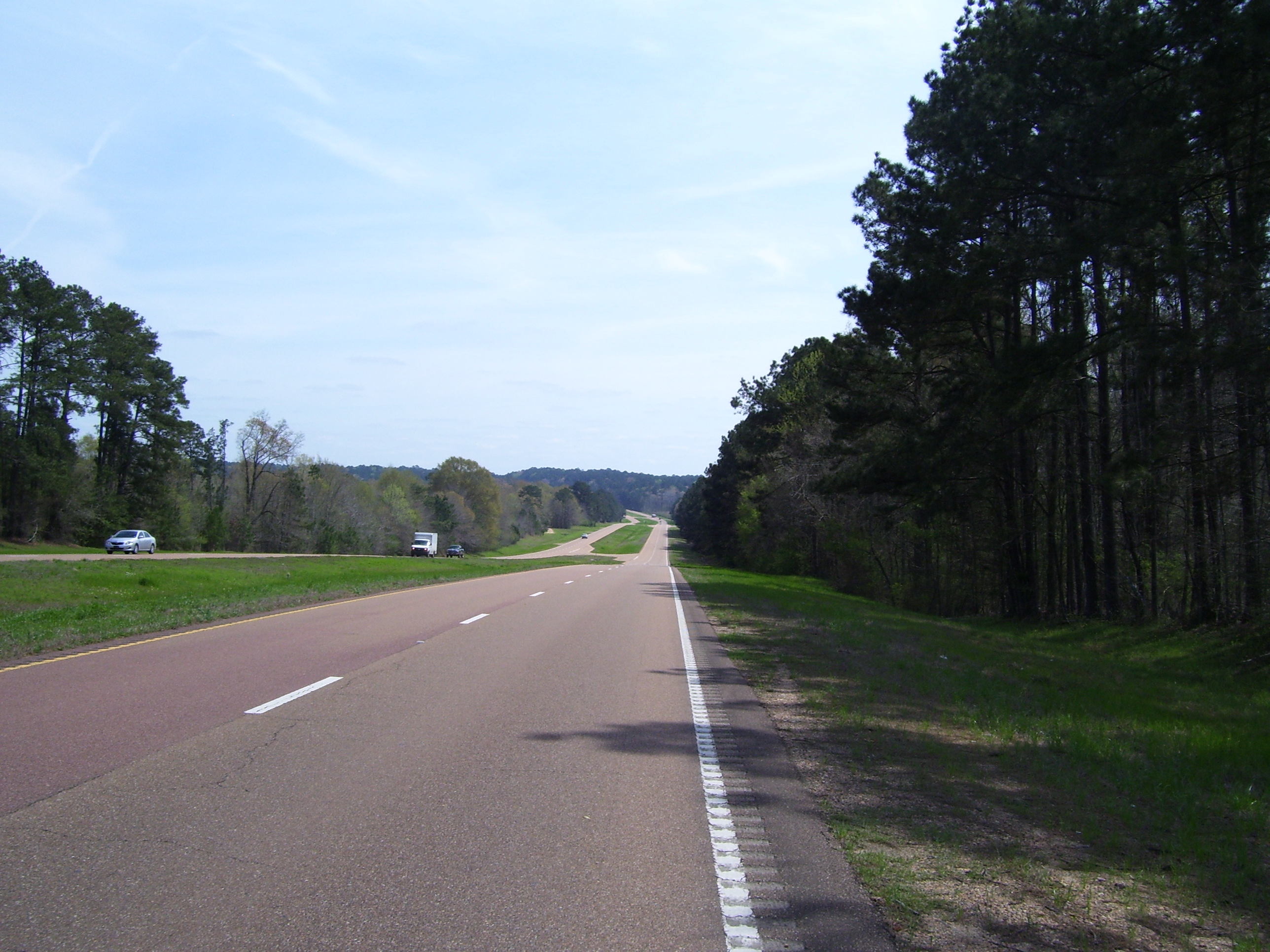 After a while I came to that turnoff that was supposed to take me to Hazlehurst, and this is what it looked like. Yeah...no way. This isn't the first time Google Maps tried routing me onto a road like this, either. Forget it. 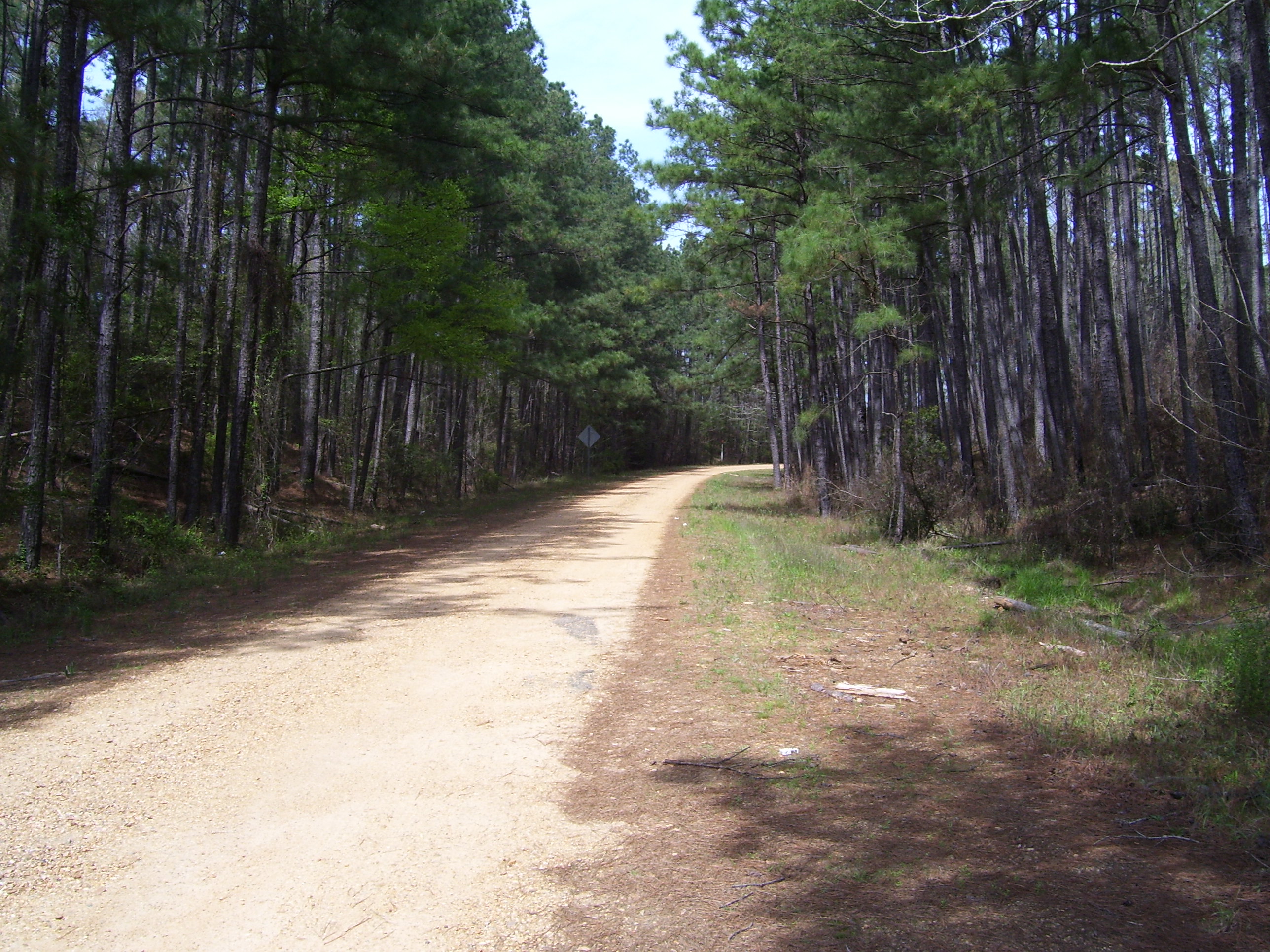 The hills were taking their toll on my legs anyway, so I figured I'd just get to Brookhaven and call it a day. US-84 had some pretty decent forest all around for most of the ride, giving me some decent scenery but cutting off any views of what lay beyond. 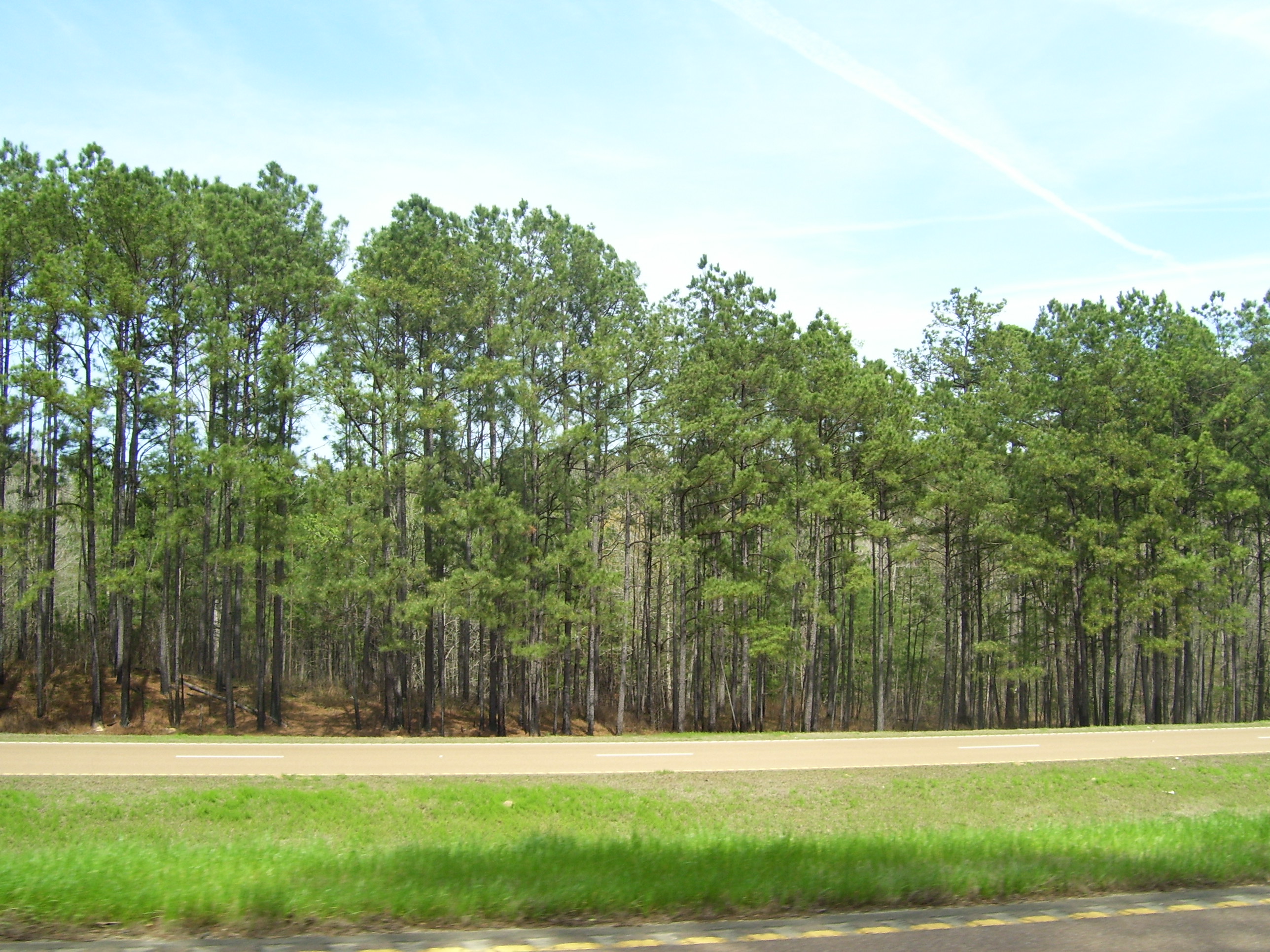 The trees actually look too regular to just be random, don't they? I did see a lot of logging trucks, so I suspect these are regularly harvested and re-planted in this area. 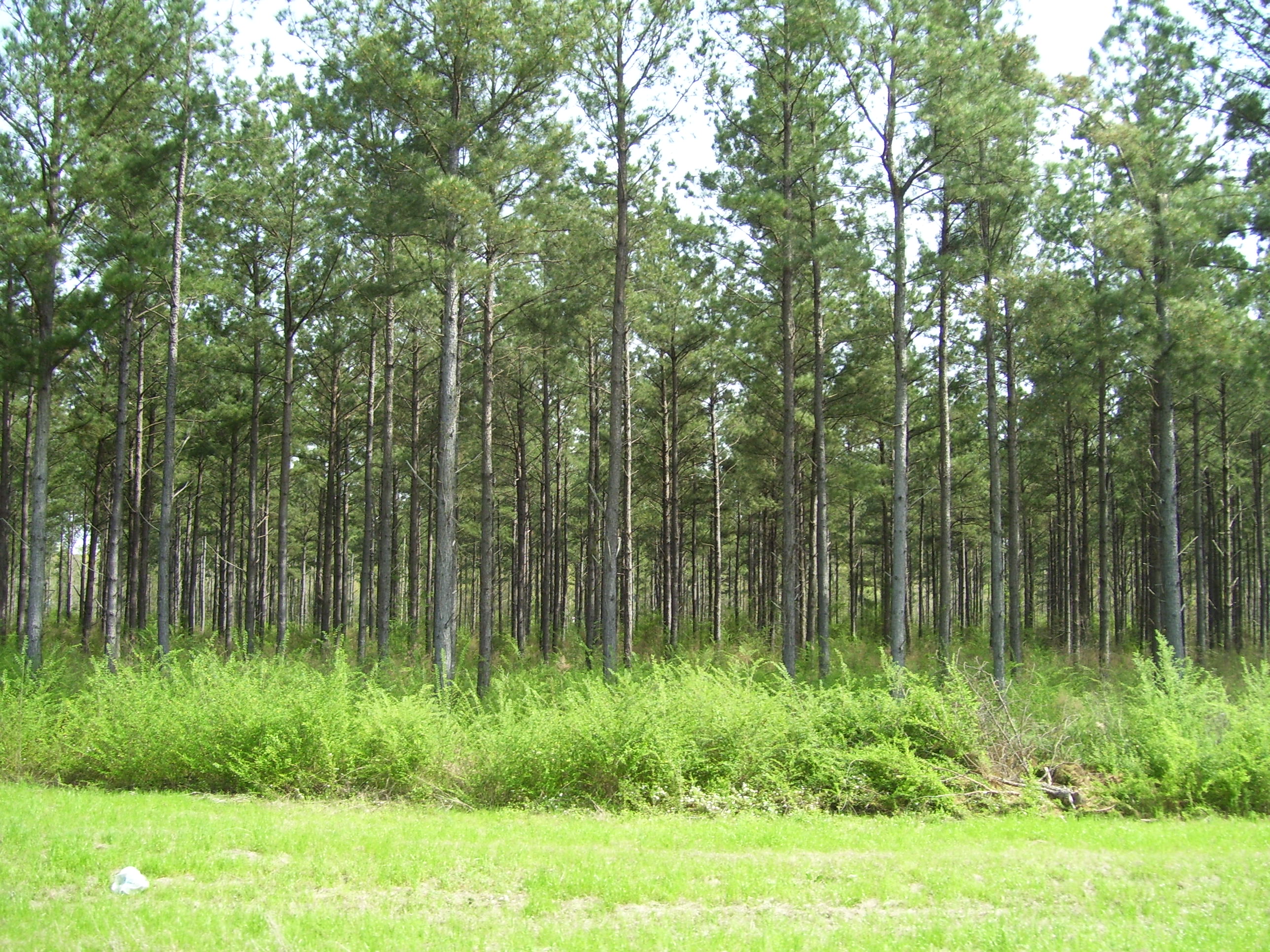 I crossed a bunch of little rivers here and there, too. Here's one example. Notice also the weather was pretty good today. Mid-70s, no rain, just those darn southeast winds messing things up. 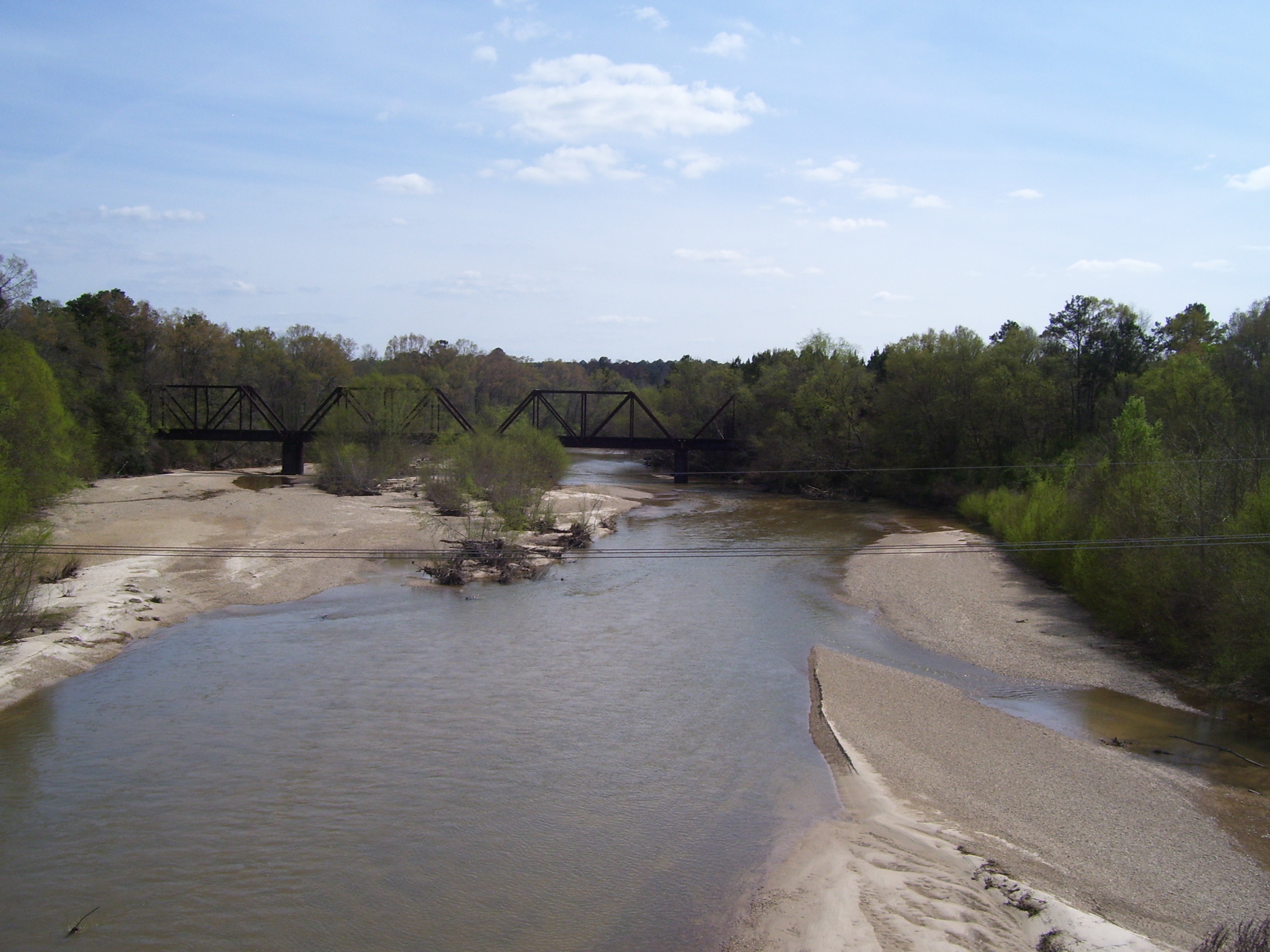 Here and there I'd also pass a rather expensive-looking home sitting well off the road. Here's a good example...sorry it's tilted slightly, I guess I didn't have the camera quite upright. But anyway, look at that grass...how'd you like to be the one who had to mow that?? Seriously, these people could open a golf course on their lawn. 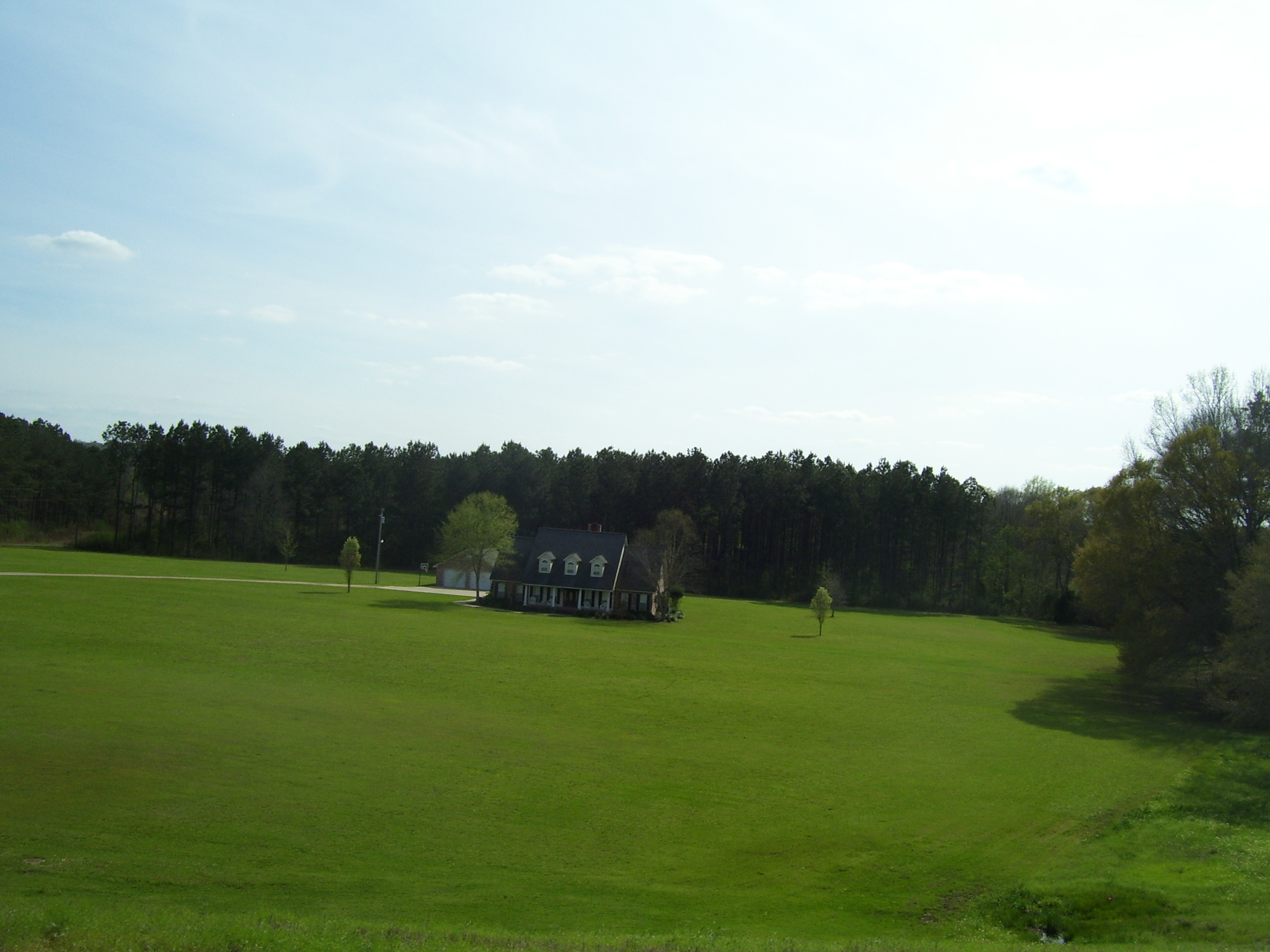 Oh, I almost forgot today's Random Historical Marker (tm)! This one's pretty weak, I know, but it's the only one I saw today. I spotted this right on the outskirts of Brookhaven, on my way into town to find a hotel. 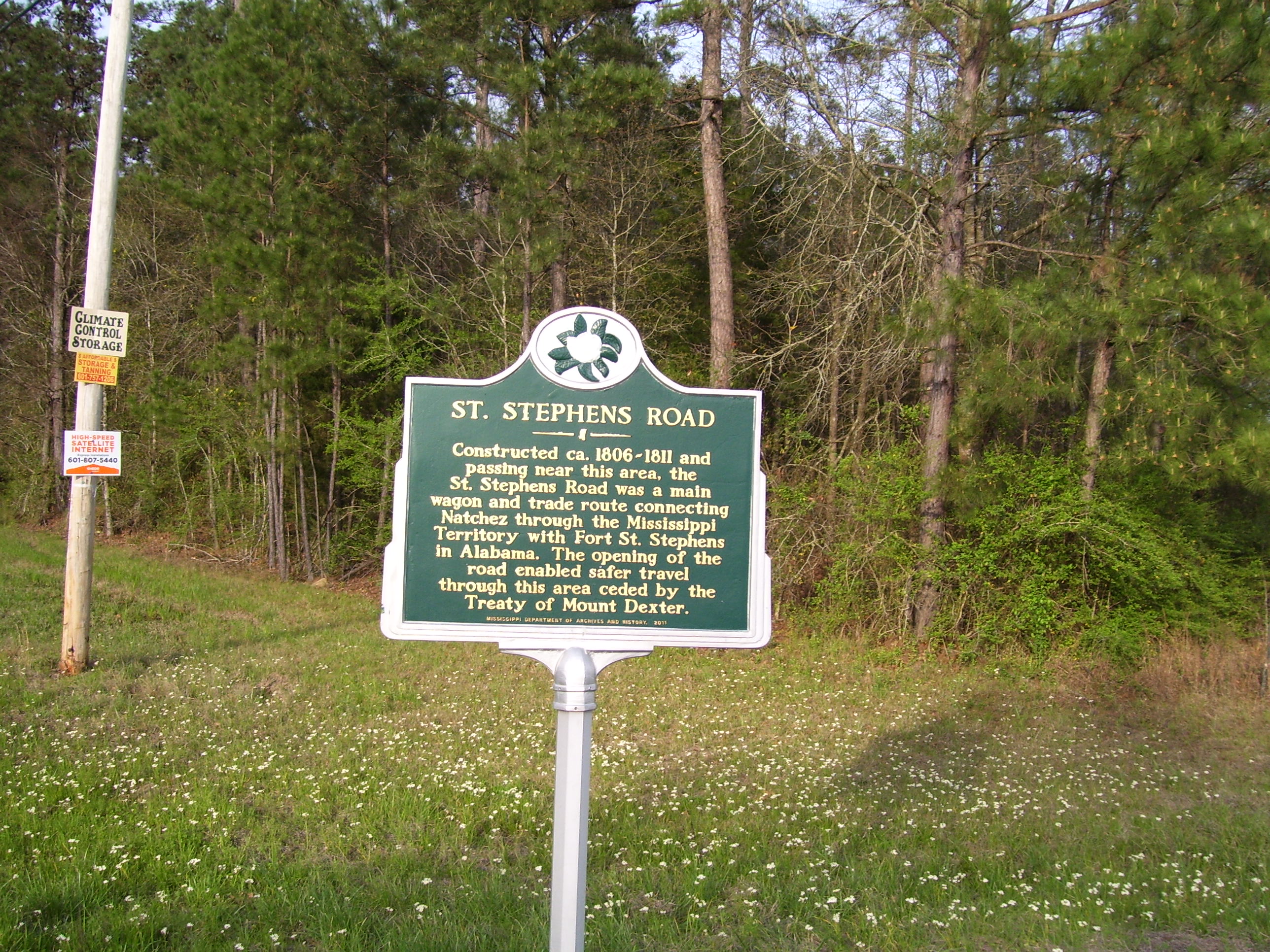 The hotel tonight is the Spanish Inn, and why it's named that, I have no idea. It's about $15 cheaper than the next closest rate in town and sits right across the street from a Little Caesars, which is turning into one of my favorite dinner places. A large pizza plus dipping sauce is only $6, and then I just grab a 2-liter at the nearest handy dollar store and there's my evening meal. Yum!

As of today, by the way, I'm only about 750 miles from my destination, so it's looking like I'll finish on Easter Sunday (April 5), give or take a day. We'll see how that prediction plays out.