Since yesterday's scenic route worked out so well, I decided to try it again today, mostly to avoid a tricky stretch of LA-28 that promised lots of traffic and no decent shoulders to ride on. The extra added miles wouldn't matter much in the grand scheme of things, so I just set off about 45 minutes earlier than usual to make sure I reached Natchez by sundown. There really weren't any other decent places to stay and besides, I really wanted to get across the Mississippi River today.

Before that I crossed over another river, this one in Alexandria, and here's a view from the top of the bridge. Note the perfect weather for today! 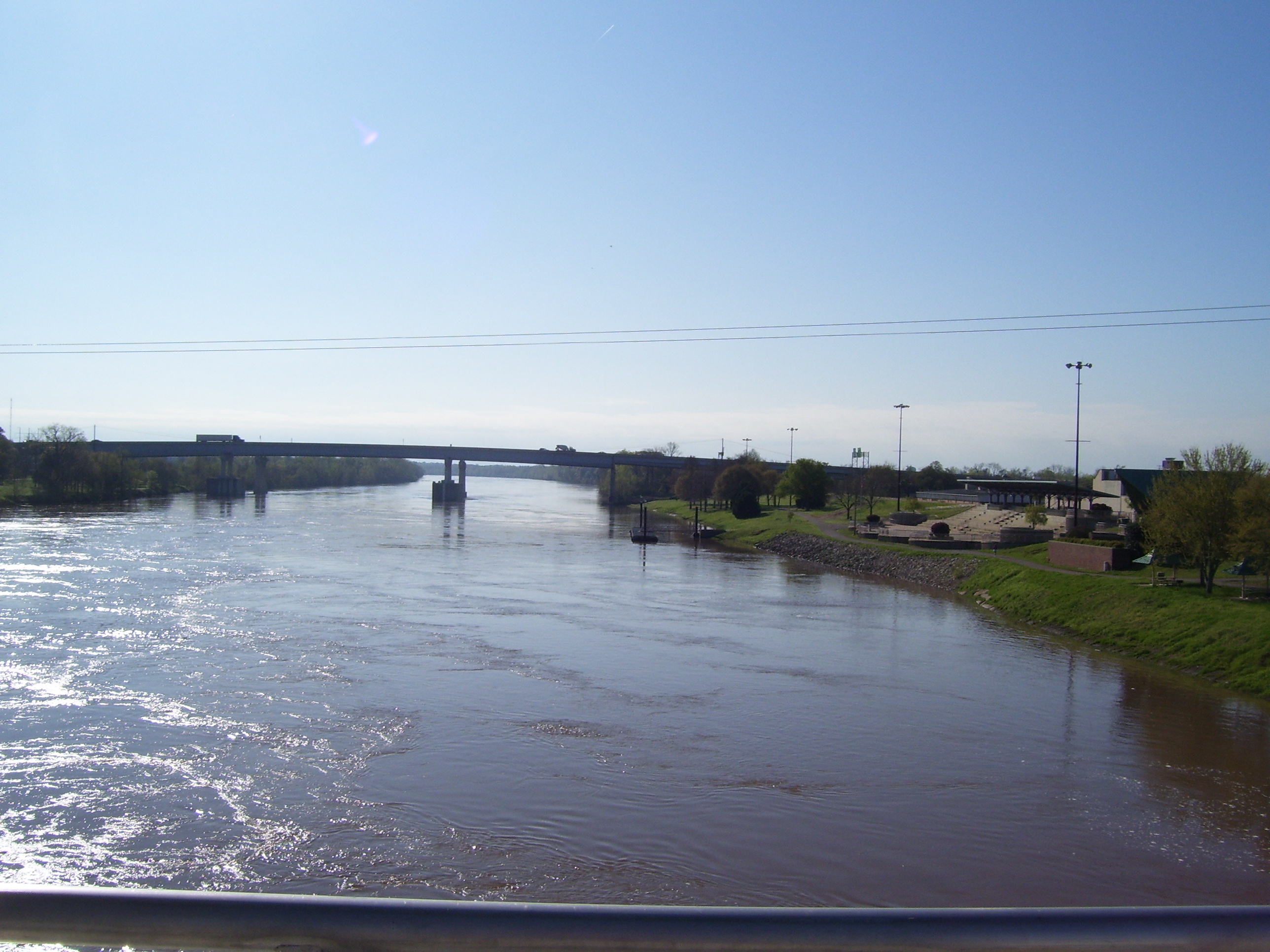 This particular bridge happened to be a very large drawbridge, which looks pretty cool from ground level: 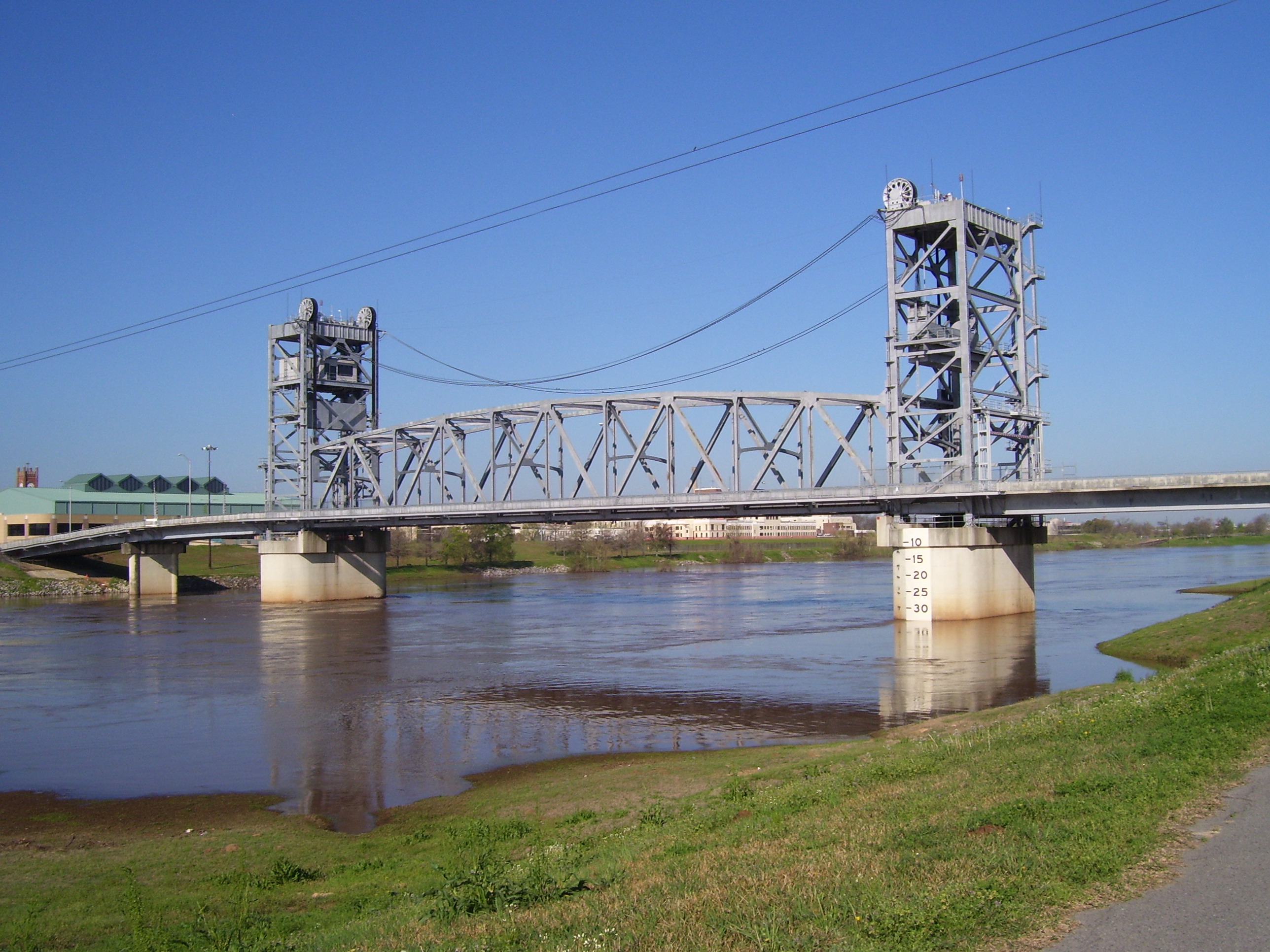 While enjoying the view, a local walked up and asked me how far I'd been riding, so the usual conversation ensued...Really? Wow, how long is that going to take? Why are you doing something like that? And so on. This particular inquisitive fellow was Mike, a self-described Cajun from a tiny town across the river from New Orleans. He's a veteran with quite a few metal objects inside assisting his skeleton in helping him walk around, but he can't ride a bike and admired the way I seemed to be making the most of my ability. We chatted for about 15 minutes before I finally had to head out, but this encounter gave me something to think about...namely, how blessed I am to be able to do something like this, when so many other people can't for one reason or another. Be thankful for what you have, everybody! A good message for today. Anyhow, here's a quick photo of Mike, who provided that little bit of inspiration to keep me moving on what turned out to be a pretty long day. 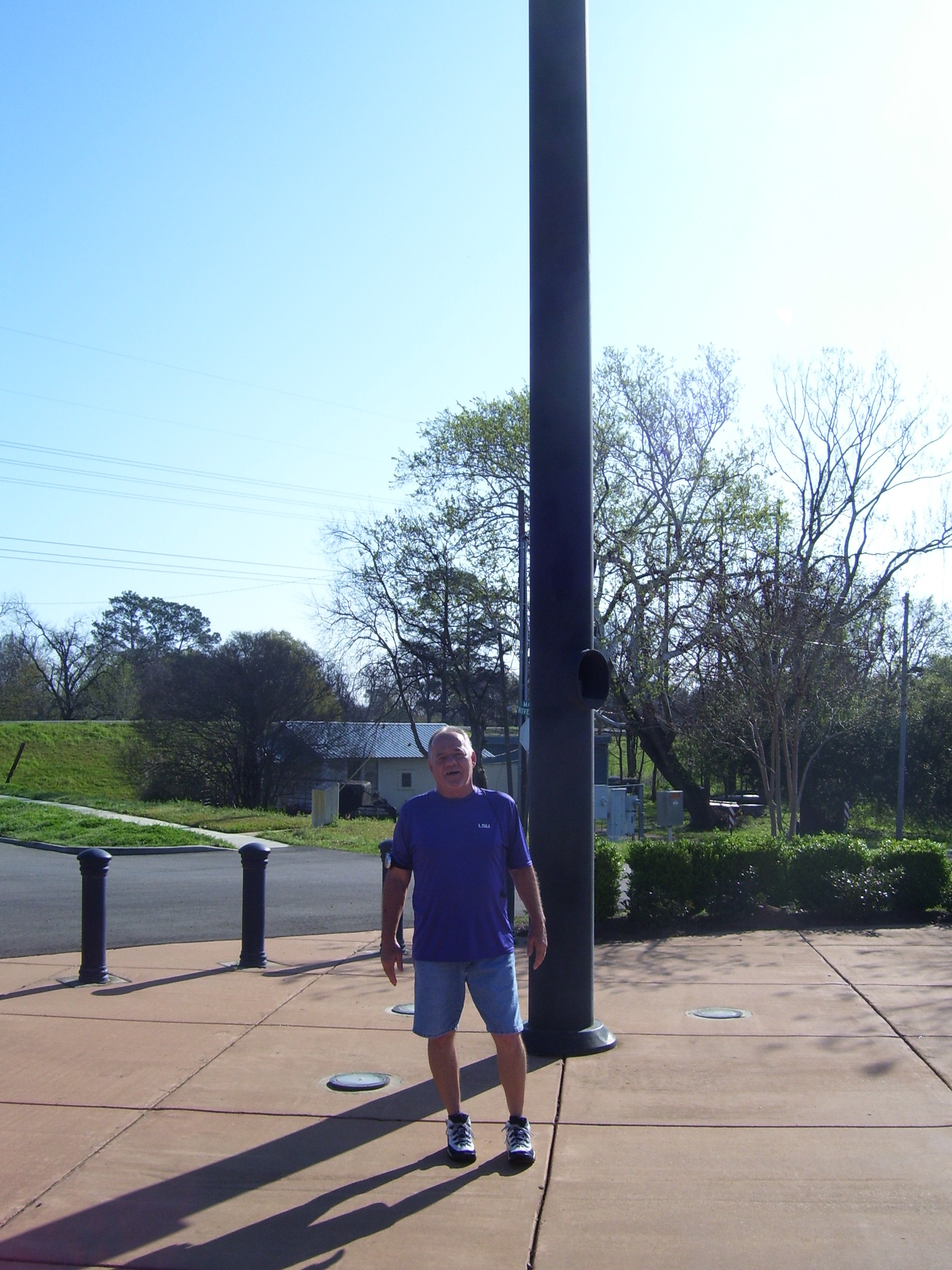 The supposed scenic route didn't work out quite like I hoped, just taking me off into forested areas on a two-lane road that looked something like this for most of the time. Not too horrible, really, since traffic was light, and the trees blocked the wind. The winds today came out of the south or southeast, and since my route wandered around quite a bit, it was a toss-up whether I'd have a tailwind, crosswind or headwind. It worked out to be about an even amount of each, the headwinds mostly waiting for the end of the day. 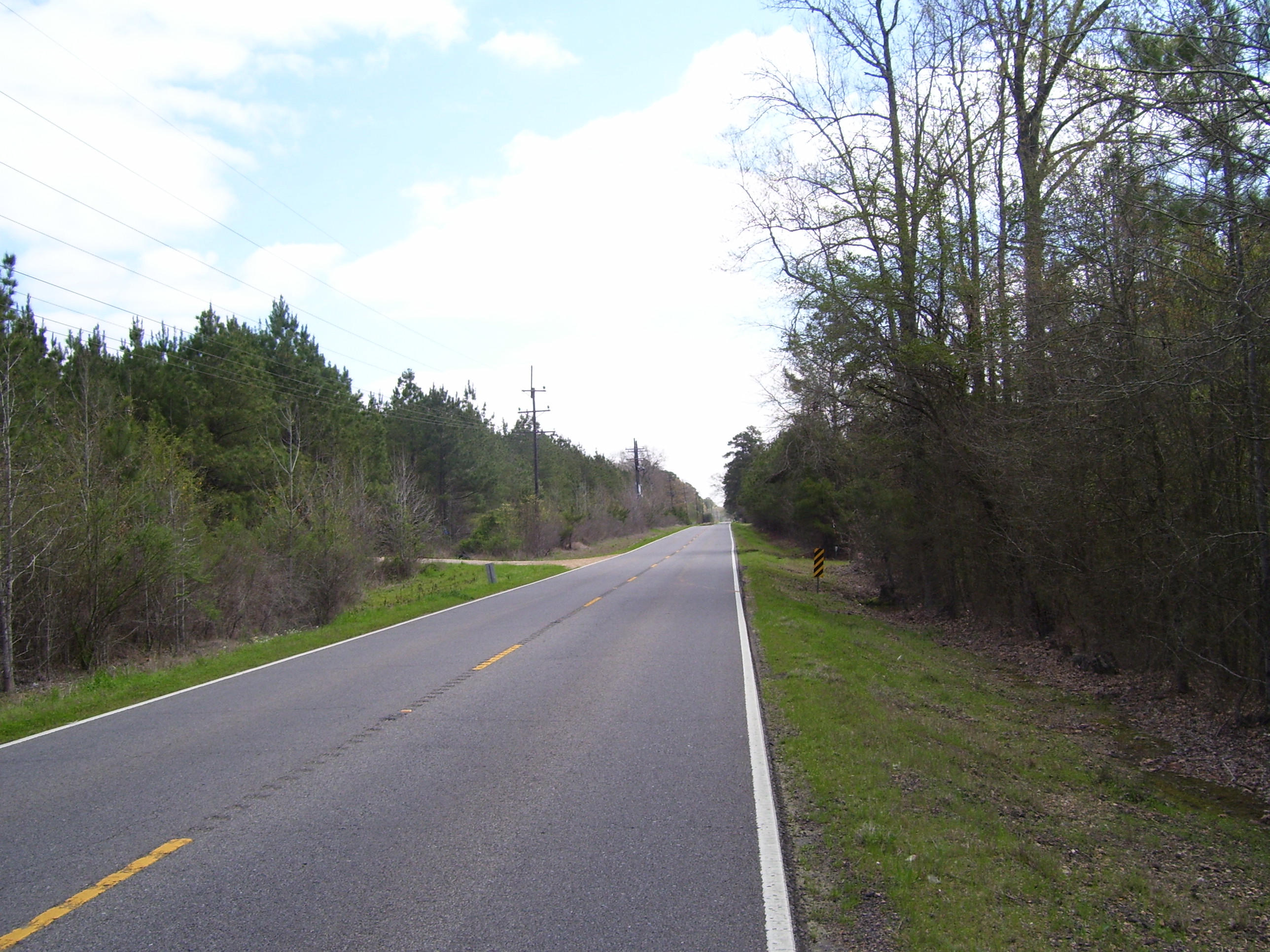 Every now and then the route took me past some lake or pond that overflowed severely, or just an outright bayou like this one. Mostly, though, I saw forests like the one in the previous picture. 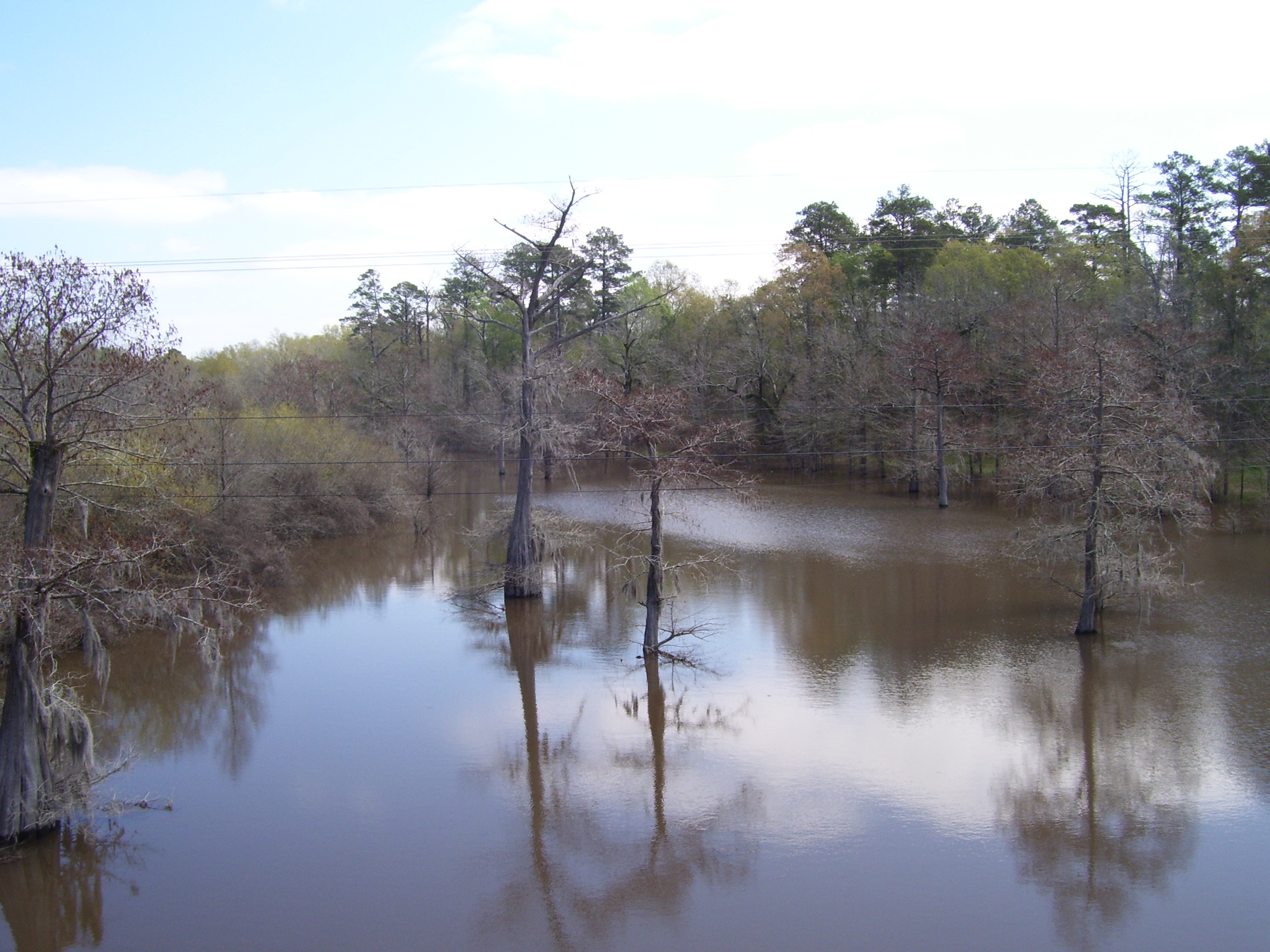 Once the route merged with US-84, I got a steady diet of this for many miles...totally flat, useless shoulder (note that I'm riding on the street and not that awful garbage to the right), and not much to see except the occasional patch of wildflowers. 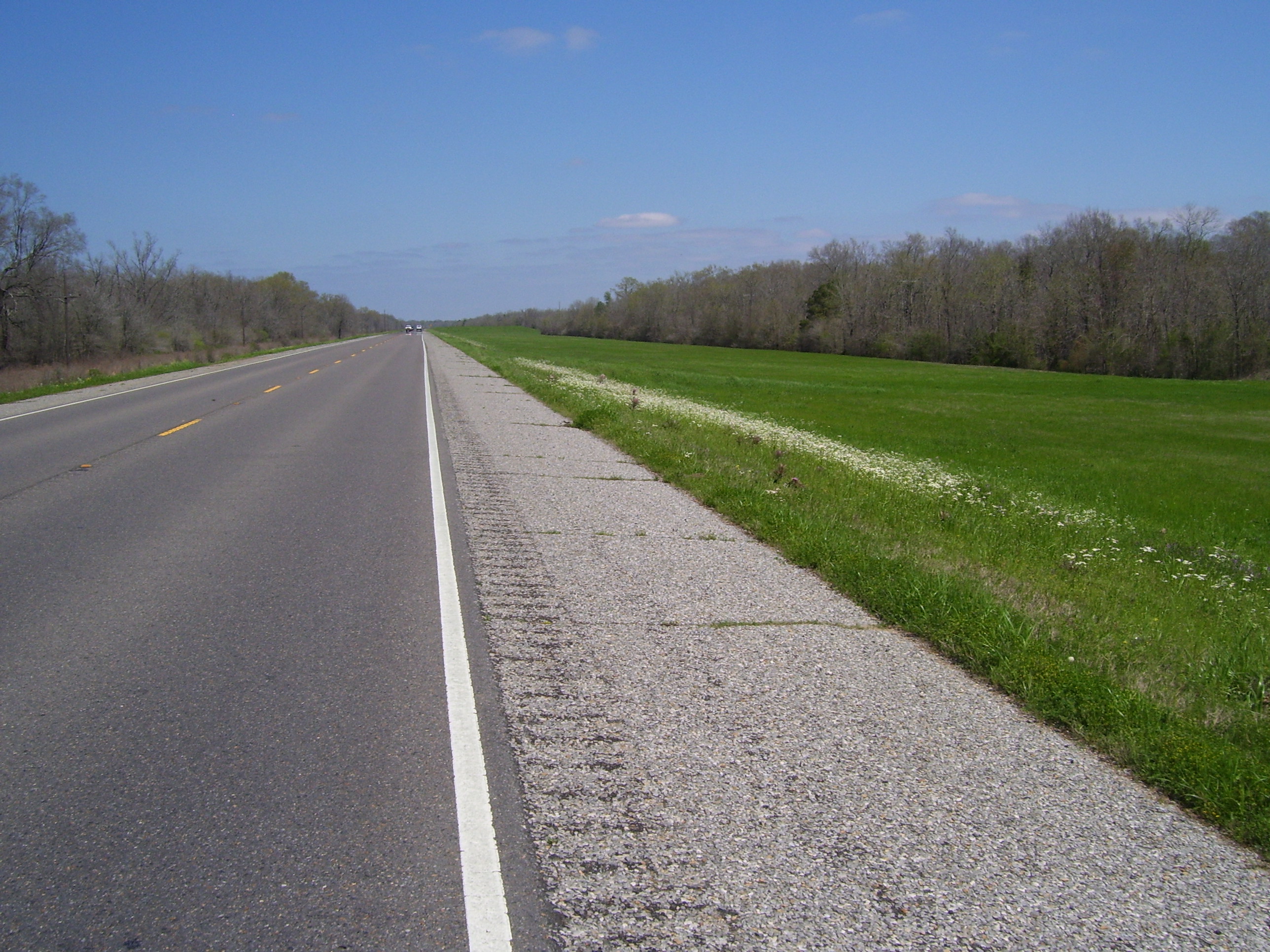 Eventually I reached Jonesville, which had a nice bridge climb for me. Riding on flat terrain for hours on end is not only boring, it actually makes things harder because my legs have to keep pedaling and never get a break (especially in crosswinds). The occasional climb actually came as a welcome break as once I got to the top, I could actually coast for a bit. Here's a view from the top of the bridge...notice that little building on the right third of the photo, completely underwater. 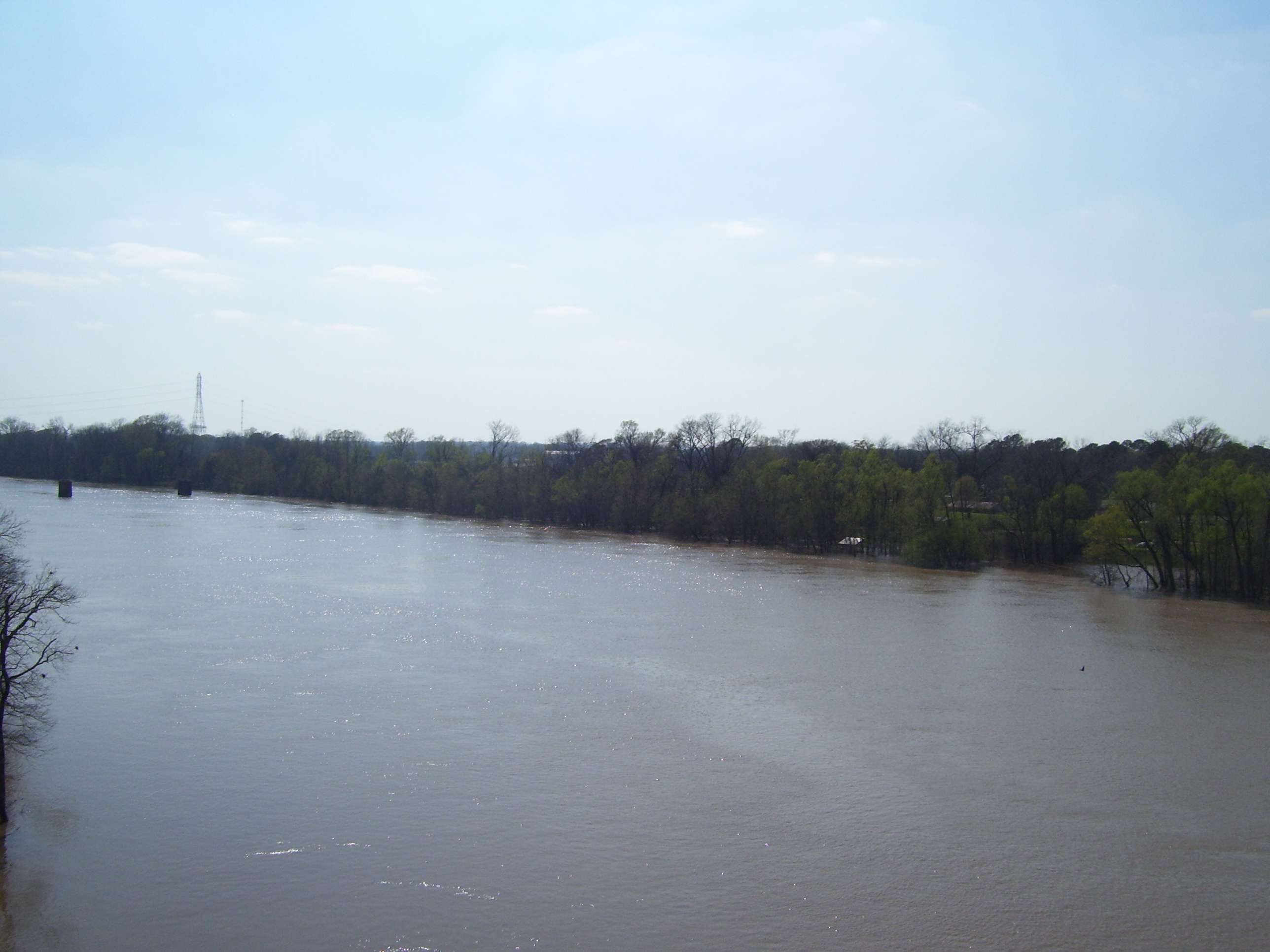 Here's today's random historical landmark picture. I thought I'd do something a bit different with today's featured site. 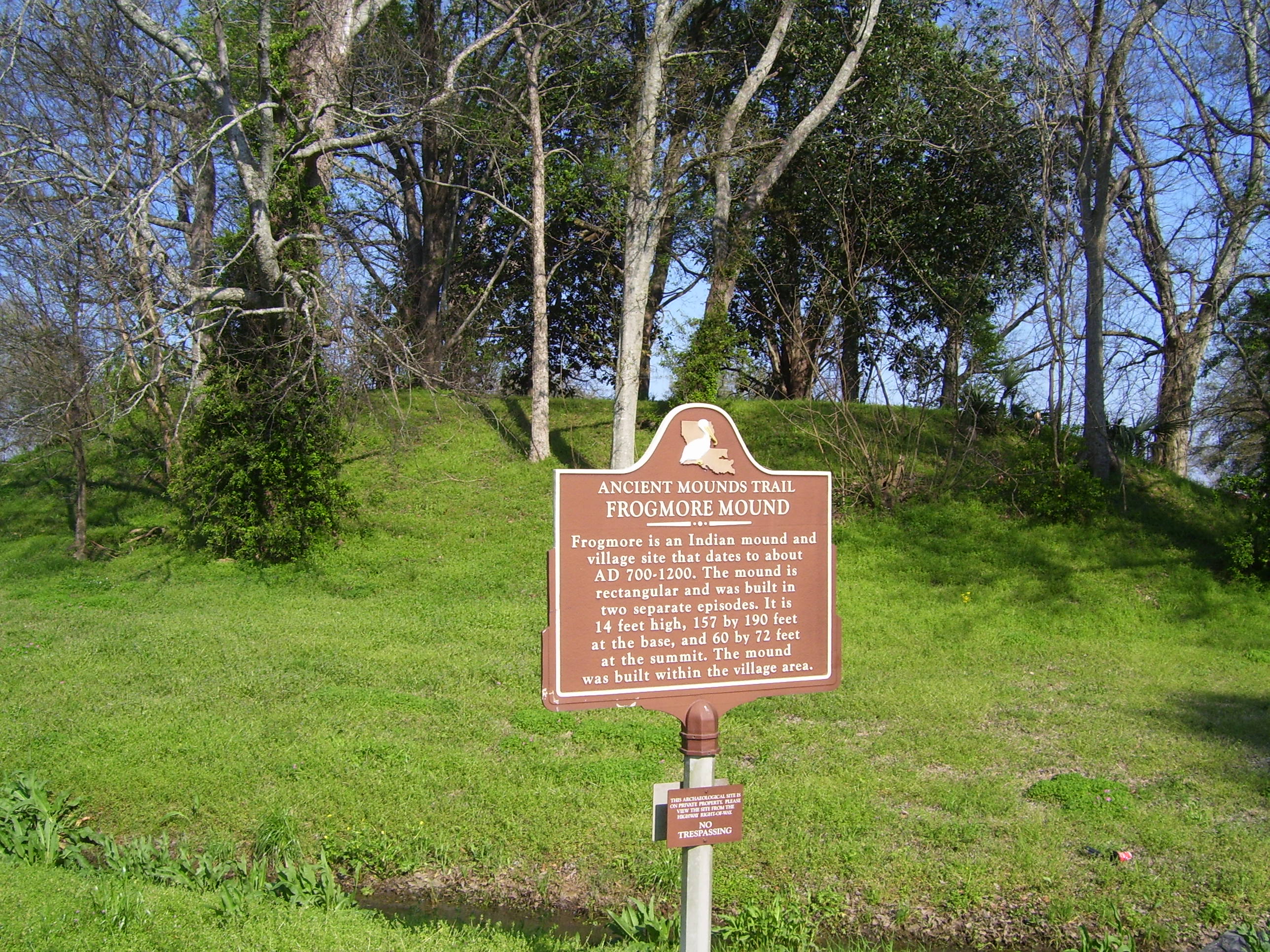 The ride eventually reached Ferriday, which had this amazing memorial park. It's hard to tell in this photo, but the line of flags in the foreground are the historic flags of Louisiana. 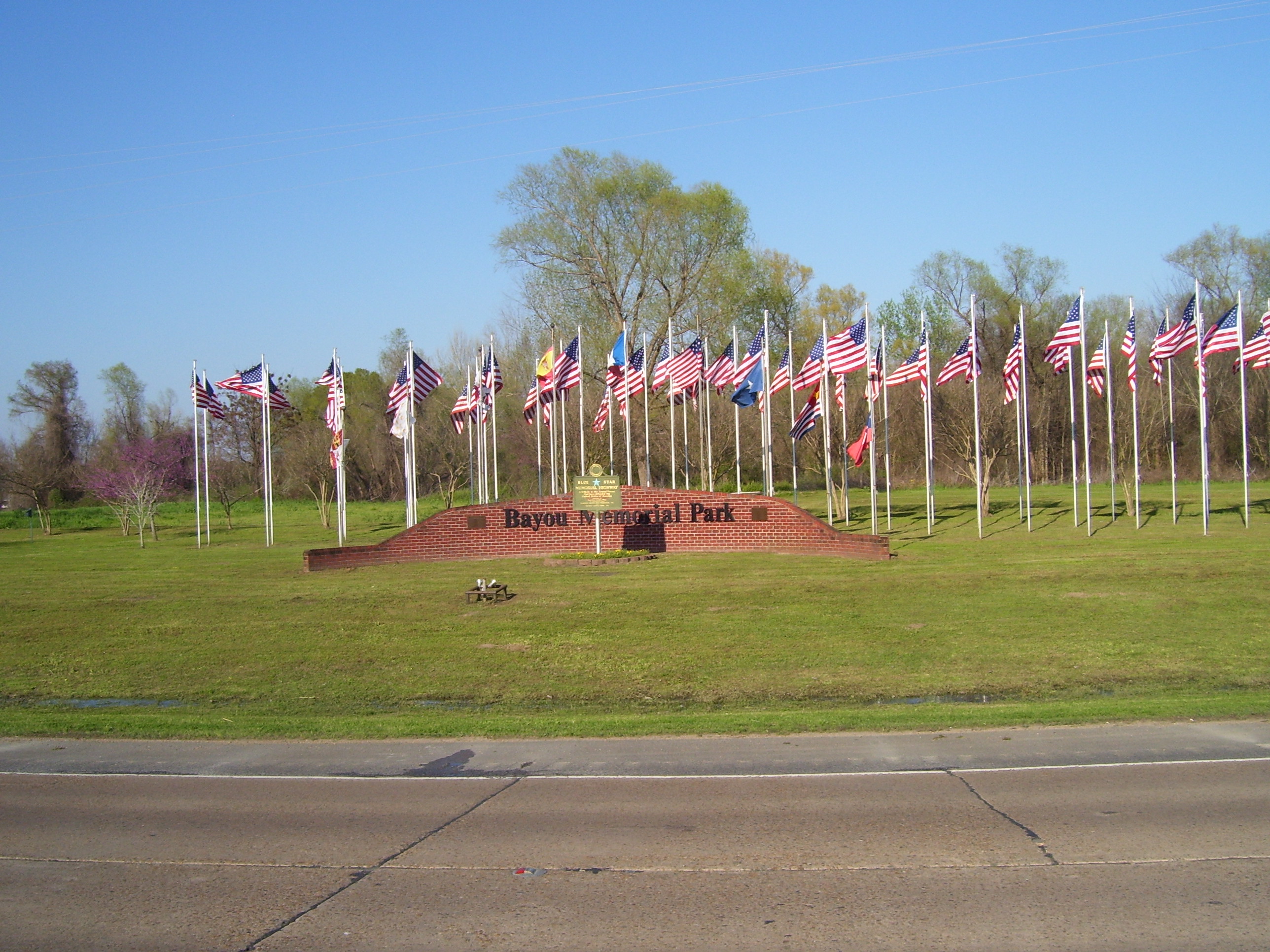 After another 10 miles or so I passed through Vidalia, the last town I'll see in Louisiana this trip, and finally came to the mighty Mississippi...which now features two bridges here, the second having been built just a few years ago. This is the reason I'm actually able to cross here on a bike. Before that, only one bridge existed and all lanes were used by motor vehicles only. Now each bridge serves a separate direction of traffic and they blocked off the right-hand side for bikes and pedestrians. The ride over was quite smooth and easy. 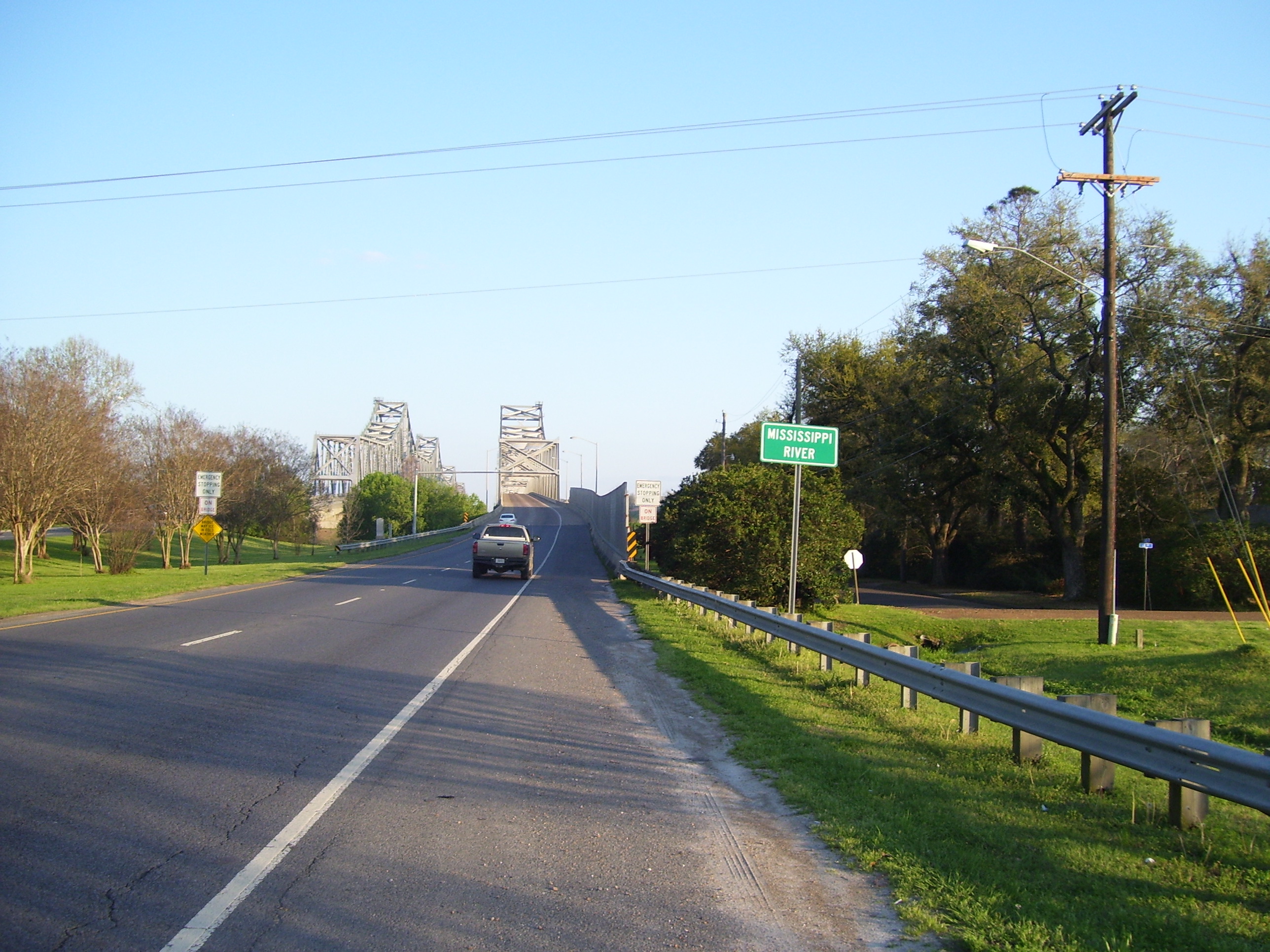 And here's the view from the top. Now that's a river! 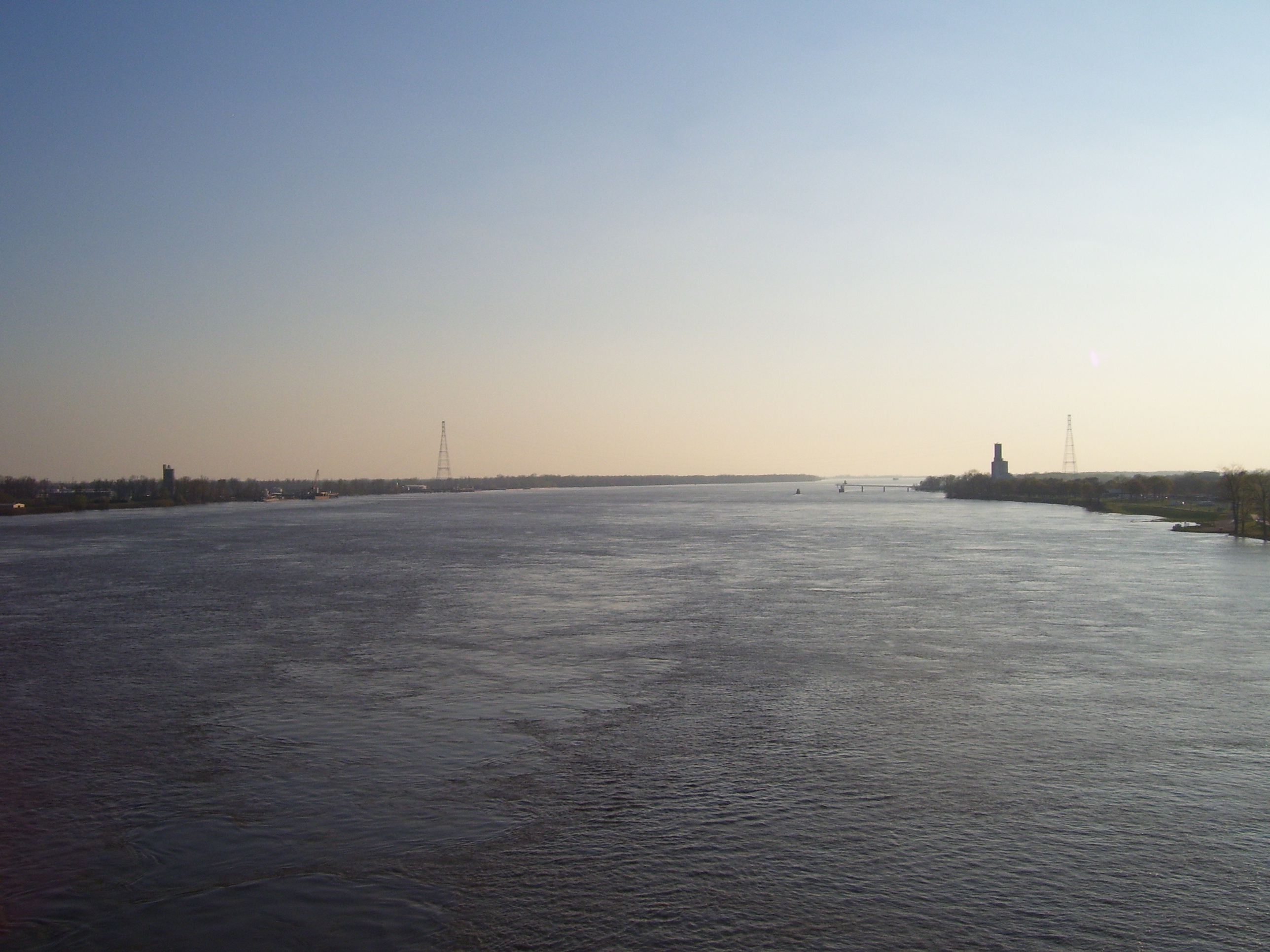 At the end I came to another new state, and one I'm pretty sure I've never bicycled in before. I actually haven't spent a lot of time in Mississippi in my life, mostly just passing through it on my way elsewhere. The next few days will be the most time I've ever stayed in this state. 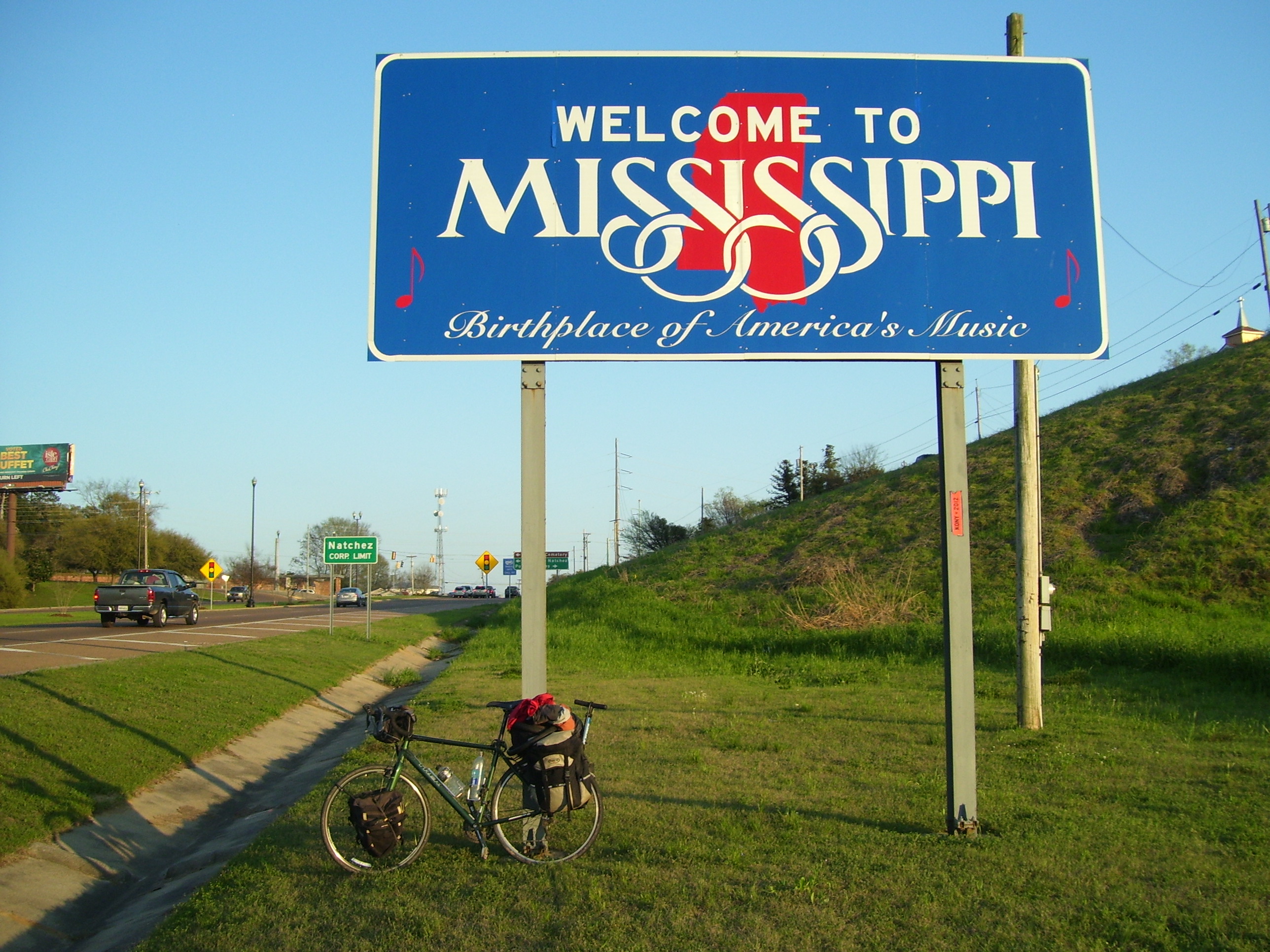 After that photo, I headed off to a Days Inn, because for once I'm in a town where there's a useful coupon from the Hotel Coupons book (readers of my east coast tour will remember those). In addition to saving me about $25 (putting the cost at $50 plus tax), this Days Inn serves free dinner on Monday through Thursday (and today's Tuesday), so I got to enjoy a spaghetti supper...which is like saving at least $10 on dinner I would've bought somewhere else. Plus they have breakfast, too, which will be a rare treat. The only downside was the internet not working in my room, but that's okay, I just wandered over to the lobby to upload today's photos.