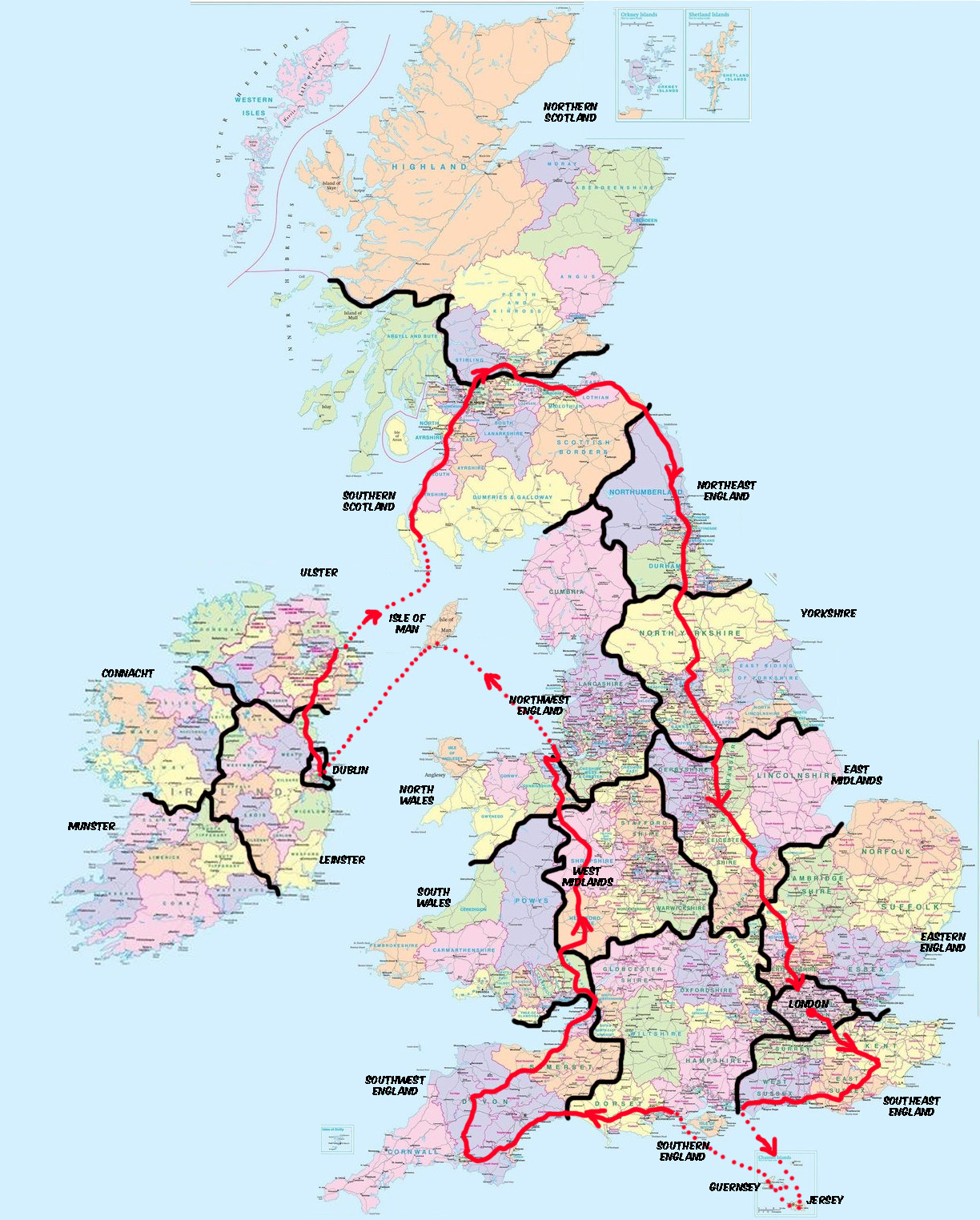 Wow, has it really been 7 years since my last major cycling trip? I really thought I would be doing these every few years, but wound up putting the whole idea off until I turned 55 in 2020...and of course we all know what came along THAT year, right? And yes, the ‘rona caught me too...I got sick enough to visit the hospital (for about four hours), and lose one day of cycling out of my daily cycling routine, but not much else. I got off easy and got natural immunity out of it so I guess that’s acceptable. In the meantime I kept on with the daily rides (13 straight years now, dating back to 2009; you can read about the “daily obsession” in the second Bikeabout preliminary logs) and spent some time trying to figure out where I would go when I got on with my next cycling trip. I’m not really sure when or how the idea of going to England came about, but somehow it just sort of coalesced as the logical place to visit for the next big tour, so that’s where I’ll be going.

On my last tour I discussed playing a game called “geocaching” along the way, searching for hidden containers placed by other cachers, to spice up the ride and help get through the longer boring parts. Since I’m still doing that, caching will be a big part of this trip, and you’ll hear quite a bit about the game, I’m sure. Part of the fun is visiting new countries and regions, so the route I’ve chosen maximizes that as much as possible. As you can see from the advance planning map to the right, England and Ireland are divided up into numerous regions, and there are also a bunch of islands that also count as different regions or countries (depending on who you ask). My route will visit as many of these as possible in this month-long trip, and also take me off on side paths to claim specific geocaches of interest.

The exact plan goes something like this:
Days 0-1 (June 9-10): Fly to London, bike around for a brief tour
Day 2: Ride to a campground for a geocaching event southeast of Royal Tunbridge Wells
Days 3-4: Ride to Portsmouth and catch the ferry to Jersey in the Channel Islands
Days 5-8: Camp for a few days in the Channel Islands (Jersey, Guernsey, Sark), then ferry to Poole
Days 9-14: Ride to Liverpool via Exeter and Wales
Days 15-16: Ferry to Isle of Man and then to Dublin
Days 17-19: Get Europe’s oldest geocache in Dublin then ride to Belfast and ferry to Scotland
Days 20-22: Ride to Edinburgh
Days 23-29: Long ride back to London via Leeds
Day 30: Pack up the bike and fly home July 8

I will have camping gear and will camp as much as possible to save money, depending on weather and how lazy I’m feeling any particular day. If I’m running short on time, I’ll skip Edinburgh and bike straight to Leeds from the ferry port, although I hope this won’t be necessary because I intend to visit all the regions on the map if I can. (Except the two westerly ones in Ireland because there’ll be no time to go all the way over there, most likely.)

May-June
Since I haven’t done a long trip like this in quite a while, I had a lot of training to do. You can’t just go out and start doing 50-100 mile a day rides without a bit of prep work, after all. The process began by increasing my daily ride length gradually...15 miles one day, then 10, then 20, back to 10 for a couple days, and so on. Partly through this my sister took a trip and I made it a priority to bike to her house every day (via a different route each time) to keep upping the miles. Then, as another milestone, I selected a geocaching event in eastern Illinois in early May and decided to ride home from that, a journey that would take three days as I rode along route 40 through Indianapolis and back to Dayton. This proved harder than expected, but I pulled it off and then took a long break to recover. After that it was back to 15-20 mile rides, broken up by a driving/cruising trip to Europe with some serious hiking to keep my legs in practice. Upon returning, I did two more long 50+ mile rides with some minor days in between and that took care of all the physical prep. 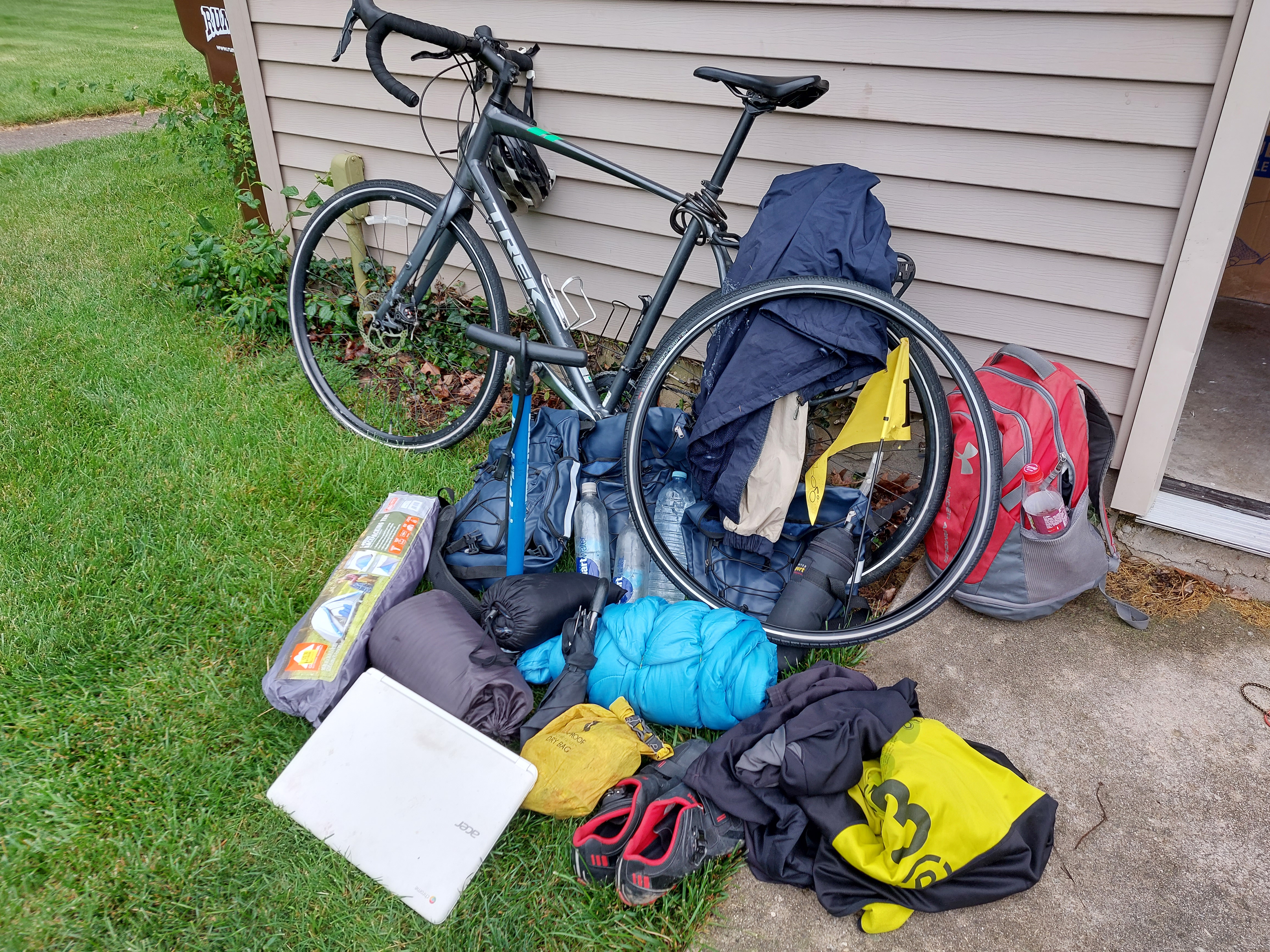 To get the bike ready I gave it a total overhaul (brakes, gears, rings, chain) and tune-up, so it rides pretty smoothly now and I feel like I can tackle the hills I’m going to encounter in various places along the route. A quick shout-out to the fine folks at the Kettering Bike Shop who got all this done for me in time and on schedule...thanks, guys! I also bought new panniers and a rear rack which you’ll see in photos later. There will be no front rack this time as I think I can get away without it, although I might get tired of carrying the backpack all the time (I expect to bungee cord it to the back occasionally).

To the right you’ll see two photos of the bike...the first shows all the gear I’m bringing, and the second shows what it looks like once all that stuff is packed up. Yes, everything in the photo fits into the bags! There is a computer, camping gear, shoes, floor pump, spare tire, water bottles, umbrella, bike tools, and a week’s worth of cycling clothes and everything goes into the two panniers and the trunk bag you see in the second picture. Some of the clothes go in the backpack which you can see is a separate item, obviously, but if it gets to be a burden I can bungee-cord it onto the back. Also, the floor pump is the thing sticking out from the back (with a coat wrapped around it). I learned on the last trip that I really need a full size air pump instead of one of those mini ones, which don’t put out enough air and also are prone to randomly breaking in the middle of your tour leaving you stranded. Not this time (hopefully)!

On the logistics front I had one major new task this time, namely figuring out where to store the bike box and suitcase I have to take along, because I won’t be shipping those across the pond and back again when the trip is over. I found a storage place near Heathrow that costs about 9 pounds a week and is big enough to hold all that stuff, so that’s what I’ll be using. The other significant challenge came in figuring out how to manage the Channel Islands ferries, because they don’t necessarily run every day and I didn’t want to be out there too terribly long. After some research I worked out a good schedule, which allows me to visit 3 of the islands (Jersey, Guernsey and Sark) and have plenty of time to explore and do some geocaching, then return to Southern England afterward. In fact, I made all these reservations (and the campsite reservations too) before I even bought my plane ticket because I had to make sure I had the timing completely worked out. (The Isle of Man, Dublin, and Scotland ferries were not planned in advance as I’m not completely sure when I will reach the terminals, whereas I’m pretty confident I can meet my initial schedule for the Channel Islands.) 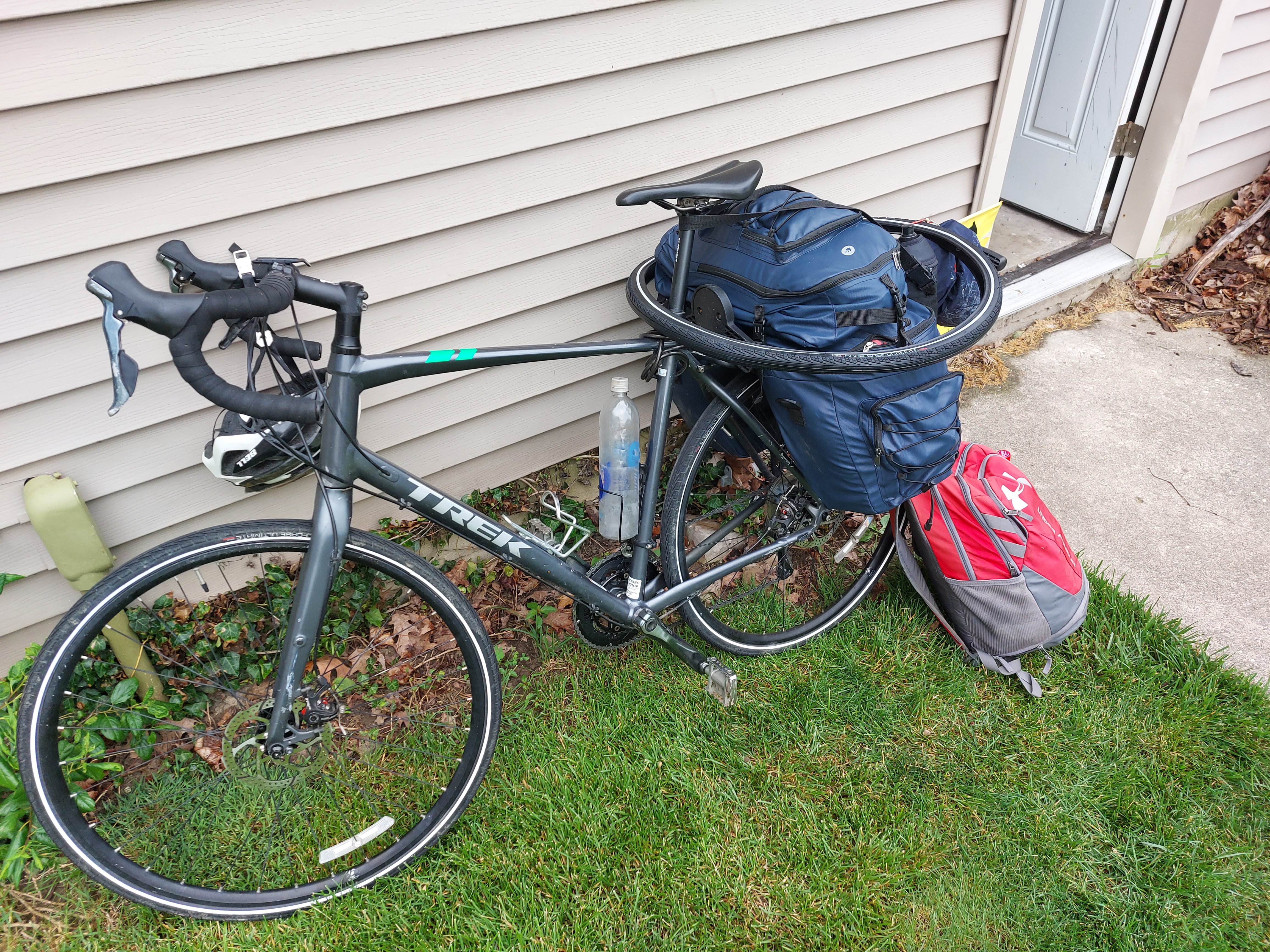 7 June
Two days to go and I’ve managed to complete nearly all the preliminary tasks, such as buy a spare tire to bring along (I’m sure I’ll go through at least one tire...or should I start saying “tyre” like it’s spelled in the UK?), get all my bills paid, collect all the stuff together I need to bring, and work on this website a bit. All that’s really left is to do a set of laundry and then disassemble/pack the bike, both of which I can’t do until tomorrow evening, so I guess I’m basically ready. I’ll post daily updates when possible and then the site will stay up afterward as an archive of the trip, as usual. Let the tour begin!

Part III: On to Scotland

Part IV: Back to London