I'm still proud of yesterday's century ride, only the second (and probably last) of this trip. Unlike the previous century way back near the beginning of the tour, I didn't take all day to pull this one off. In fact, I really wasn't sure I was going to make it at all. I raced the clock the entire afternoon and only took one break after lunch. I really hated to erase the trip meter on this one, as I do every morning, so I took a picture to remember it by. 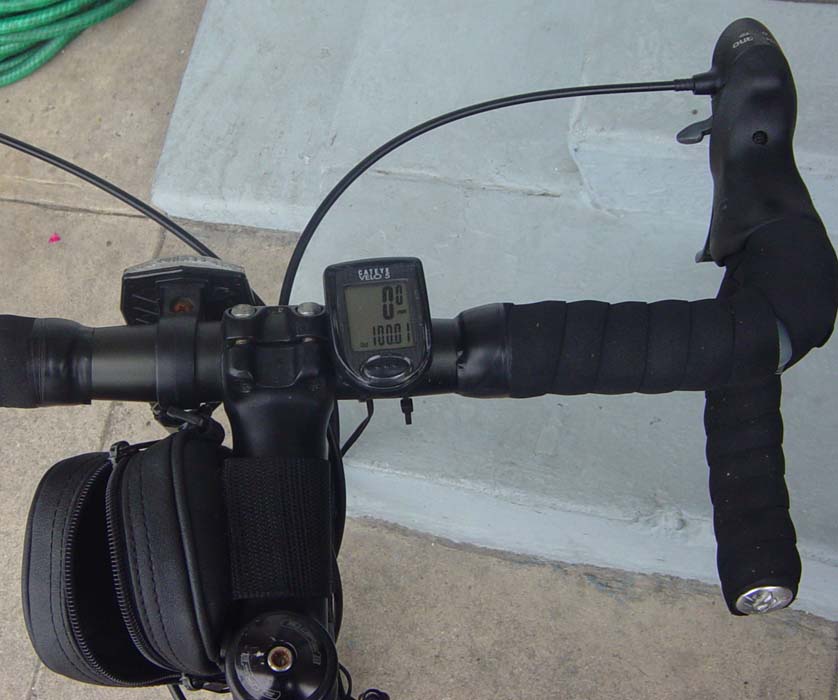 That pouch over on the lower left is where I keep the camera, by the way. It's accessible enough that occasionally, if traffic is light enough, I can take it out and click off a picture while riding.

Anyway, I set off about 11am, because I'd arranged to have lunch with a couple of friends who live in the general vicinity, and it turns out they're planning their own long bike ride sometime in the near future. They were more than happy to listen to me blather on and on about my trip, which gave me a nice ego boost. Plus they bought me lunch, which was more than I deserved. I really think Jason was really after my bike, though. I caught him in the act trying to take it. Or maybe he just wanted some water. 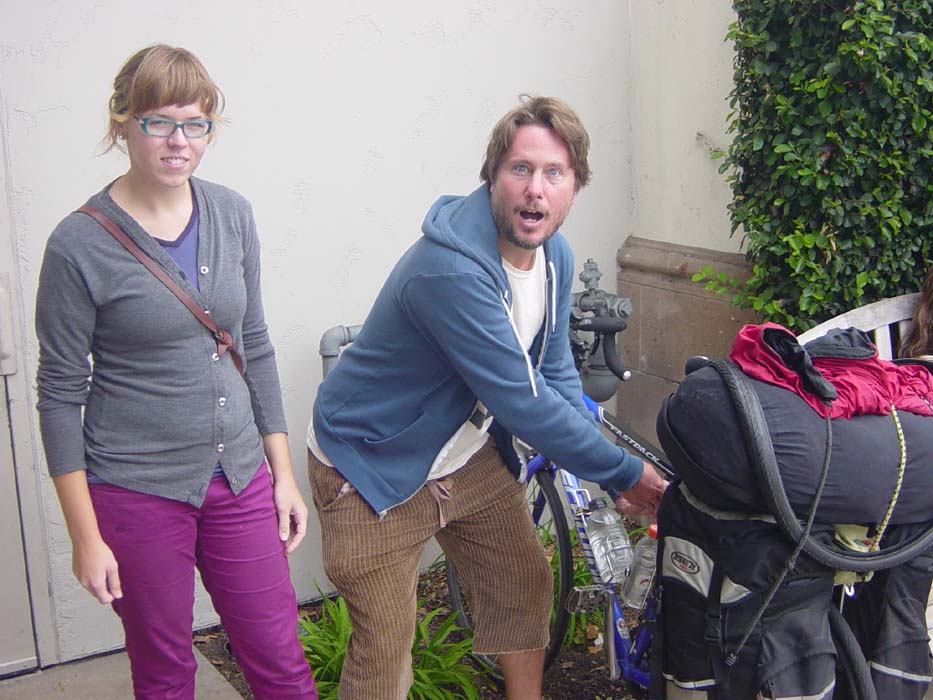 After saying my goodbyes I headed off to make my way through the crowded and seemingly endless streets of Los Angeles. I've been in LA before, many times, so I already knew what I was in for and didn't really plan on making a long ride out of it. I did, however, want to get completely through and out of the city if at all possible, mostly to set up the next day's ride, but also because I really never feel all that safe in big cities. Last night's stay in the tiny cash only hotel wasn't making me feel any better, either.

I didn't take a lot of pictures today, mostly because there wasn't a whole lot to see unless you like buildings, concrete and asphalt. LA is basically jammed with everything you can think of, sometimes pressed right up next to each other, like this set of nice home directly across from an undeveloped area below a ridge covered wth apartments. 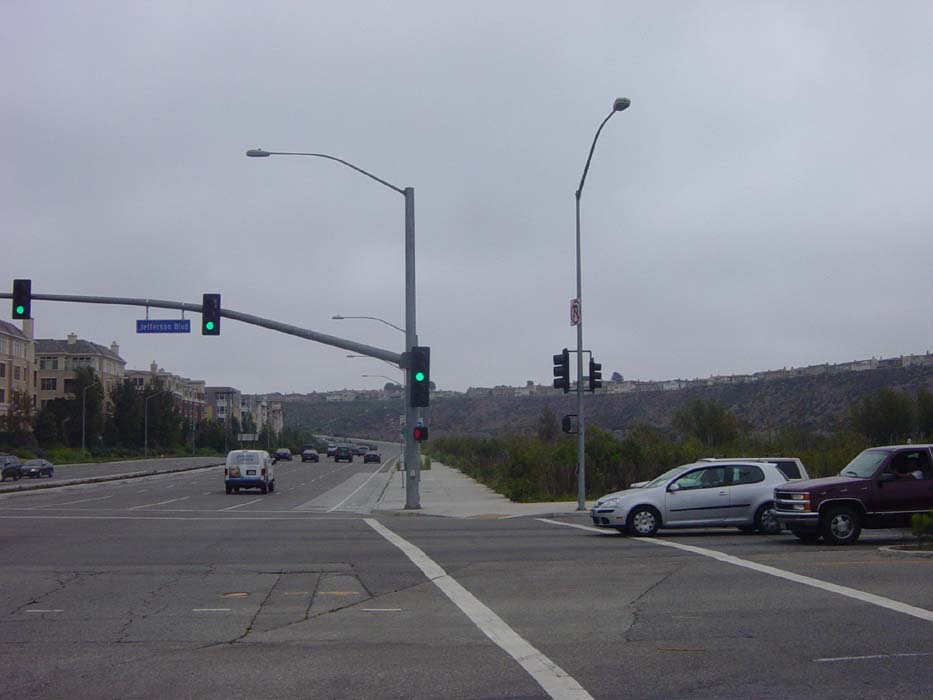 I was following Route 1 again at this point, intending to stay on it all day, until I got into the downtown area and was confronted yet again with THE SIGN. Yes, that's right, THE SIGN! At least this time I kind of agree with it, though. This tunnel goes under a set of runways at the airport, and as you can see, the right-hand lanes (in the tunnel) break off onto a freeway, which would mean that halfway through this dark passageway I'd have to jump over to the CA-1 lanes, a risky proposition indeed. This time, at least, I bow to the wisdom of THE SIGN. 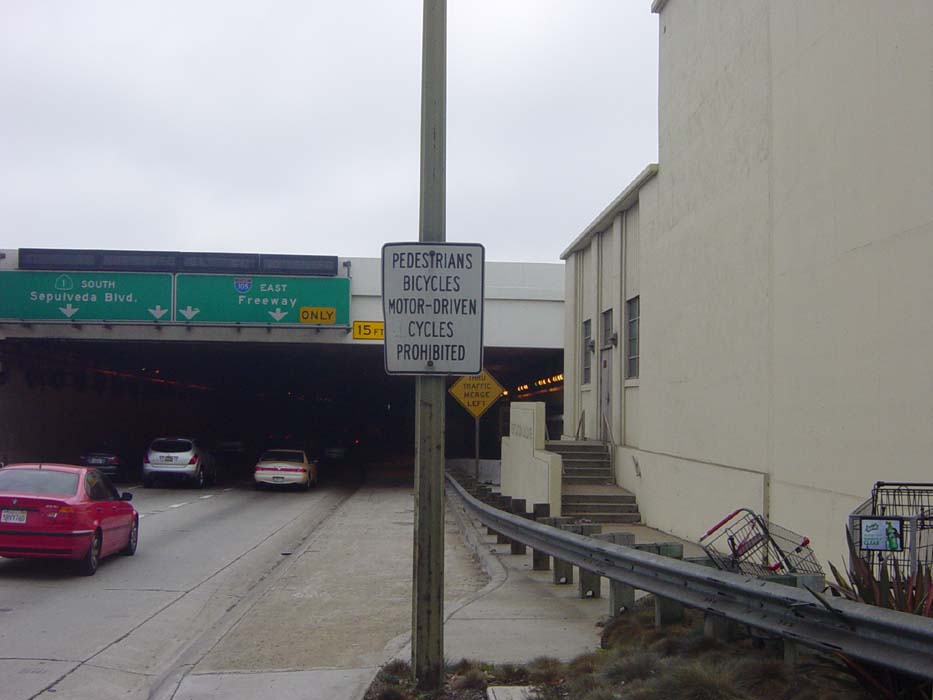 So I had to go back and cut across on Century, but this did give me a chance to take some photos of the world's busiest airport, LAX. I was actually right next to the entrance at this point, not intentionally of course, but there I was. 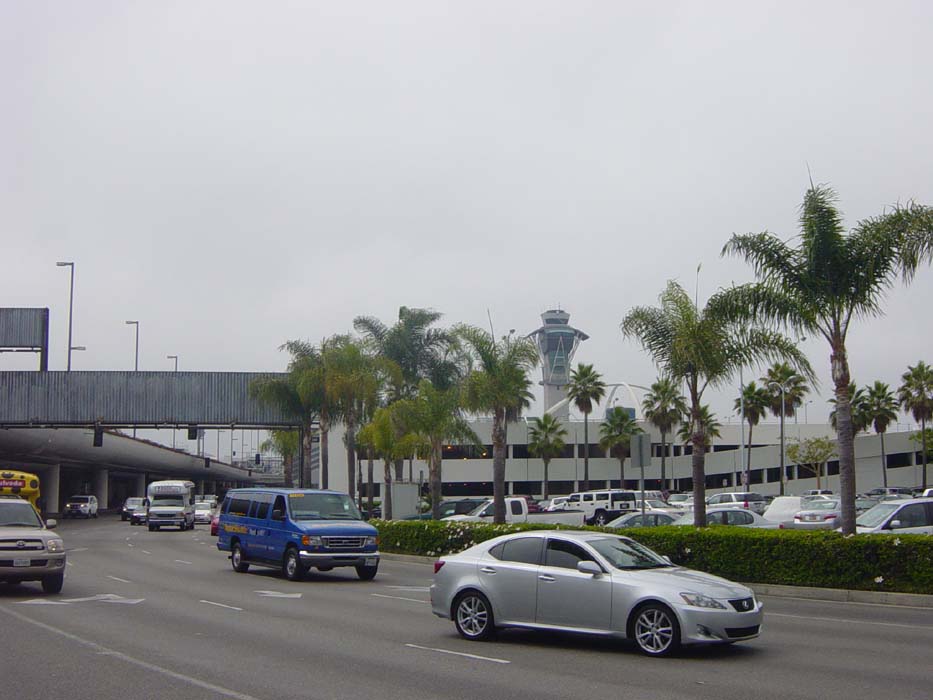 If you're in the right spot, you can get fairly close to the planes as they land. Hmm, this is pretty close, but not nearly close enough, I don't think. Let's see if I can get closer. 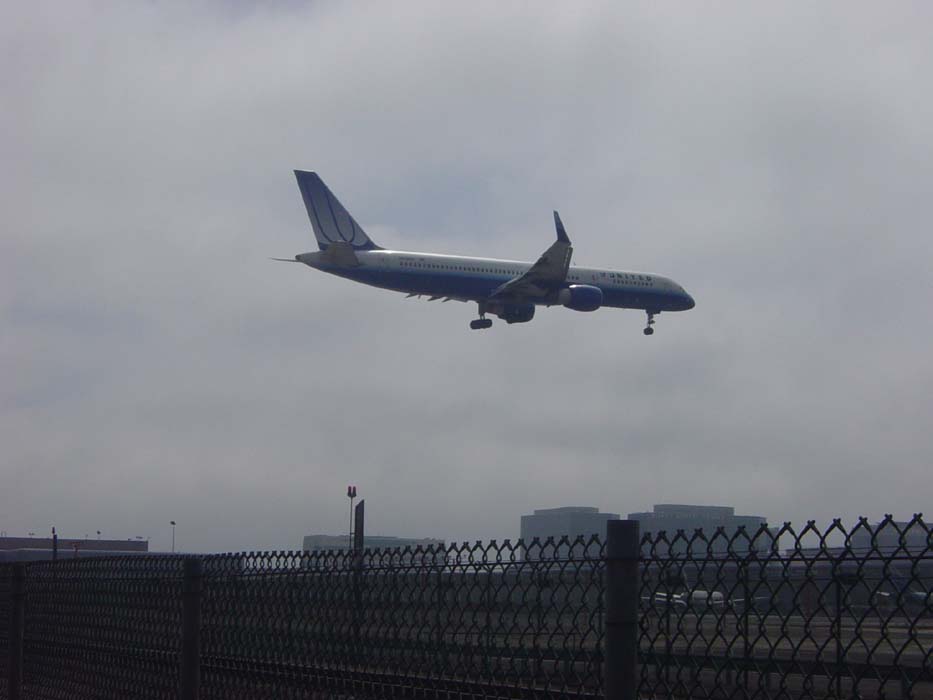 Ah yes, much better. (This isn't even maximum zoom. The plane was only a few dozen feet overhead, coming down just over the fence I was next to at the time.) 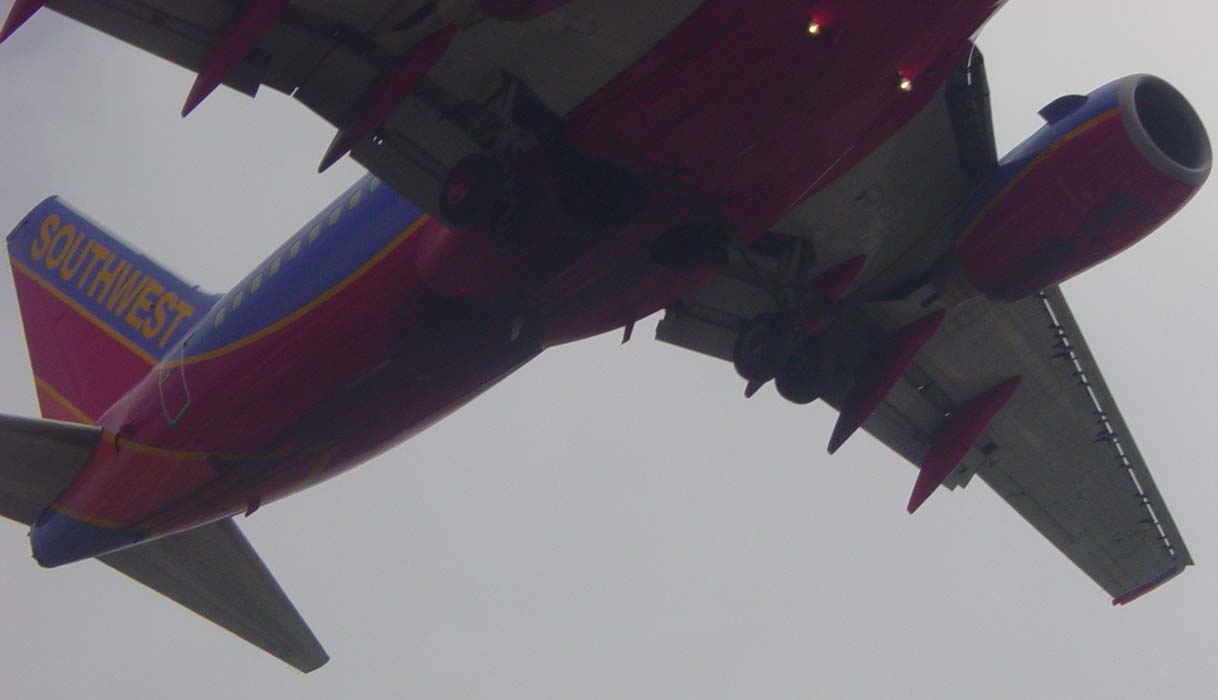 Like I said earlier, if you like lots of concrete, this is a good city to visit. I took a break here in the shade, shortly after turning onto Aviation Boulevard, which I knew would (eventually) link back up with CA-1. 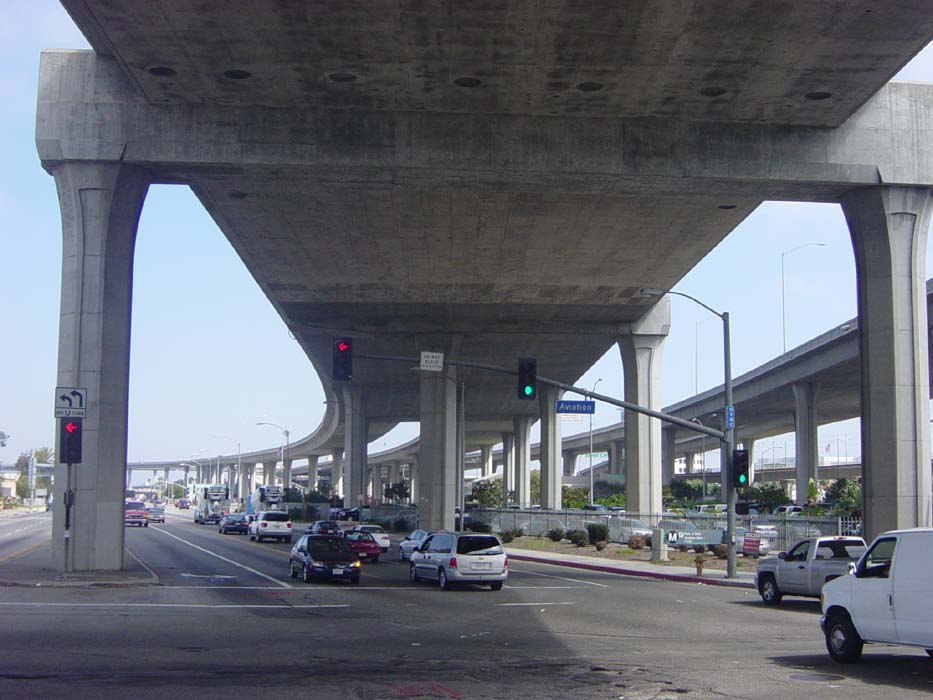 This next picture won't mean anything to most of you, but many years ago my friend Tom (the same one I mention multiple times in the first week of this trip) used to work at this very site. I remember it well because a few times when I visited, I'd accompany him to the office. It always struck me as odd that this nice looking building sat smack in the middle of Aviation Blvd, which is otherwise rather ugly (at least until you get farther south). 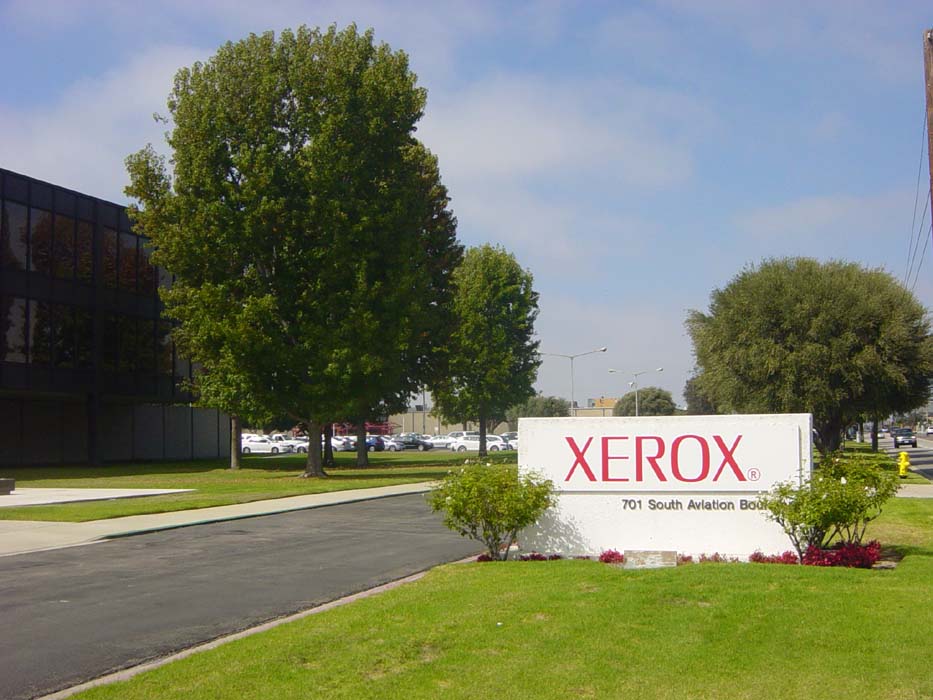 Aviation continued south almost all the way to the beach where it connected back into Route 1, now called the Pacific Coast Highway. I followed this along through a bunch of small towns like El Segundo and Manhattan Beach. This view here is typical of the sort of stuff I saw all the way along until I got to Palos Verdes (the hills up ahead). 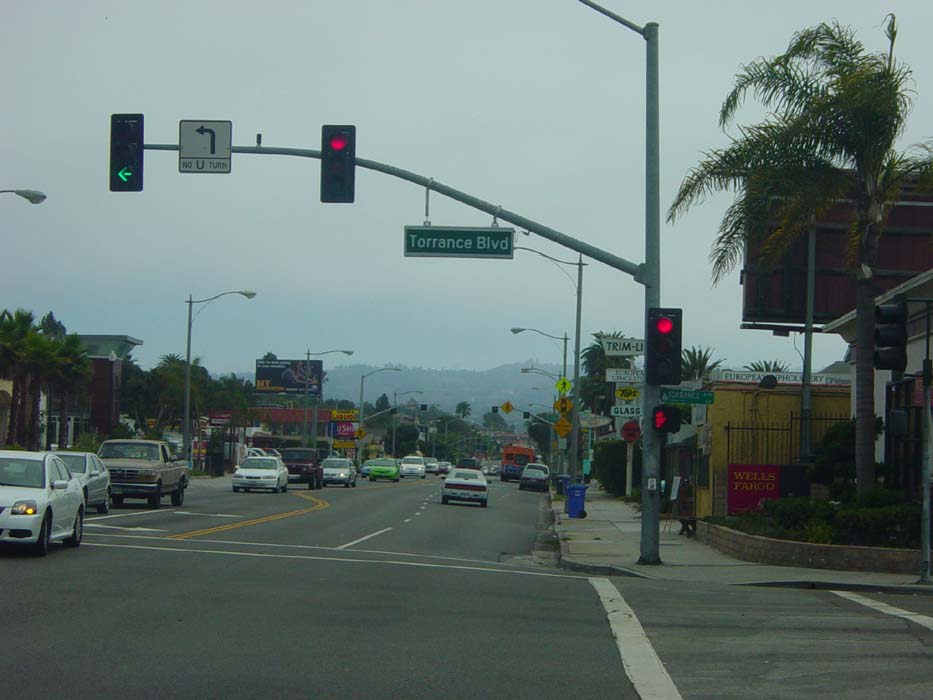 After turning east I went through some pretty miserable industrial crap (seriously, who builds refineries on the beach in the middle of a city?) before getting into Long Beach and then a number of smaller suburbs. Here's an odd building I spotted on my way through Sunset Beach (I think that's where it was). Turns out this is actually a place you can rent to stay in if you're on vacation. I hesitate to even guess at the cost. 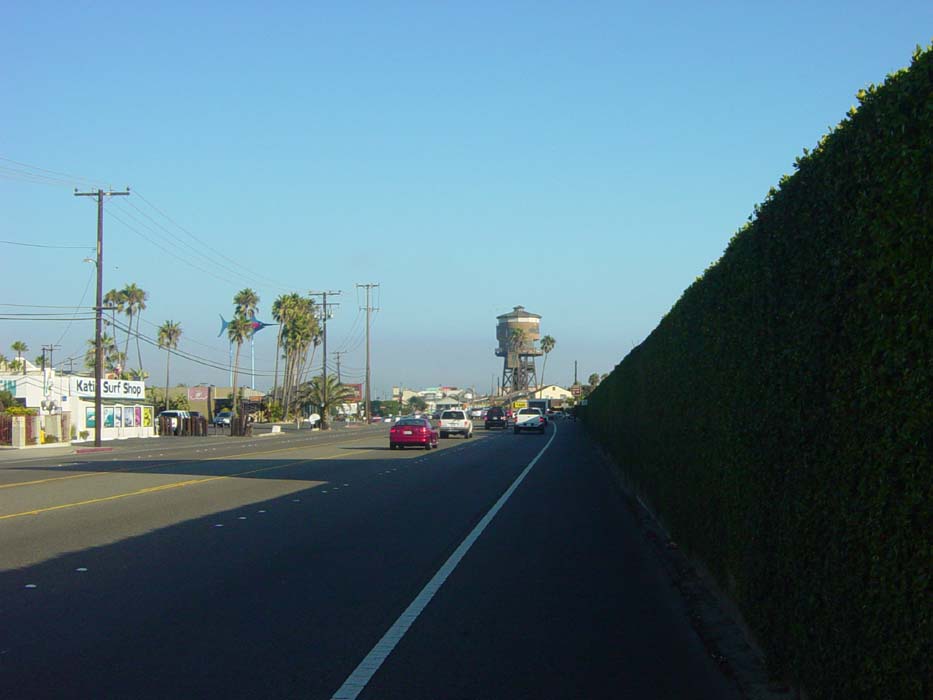 The sky looks relatively clear here but further on it became overcast again, and that's how it stayed all night and will probably be all day tomorrow. There's some kind of low pressure area floating around out here that's keeping the coast covered with clouds and the wind coming up out of the south (hence the annoying headwinds I had to deal with most of the day). The beach here, which is the start of Huntington Beach, would've looked a lot nicer in full sunlight, I'm sure. 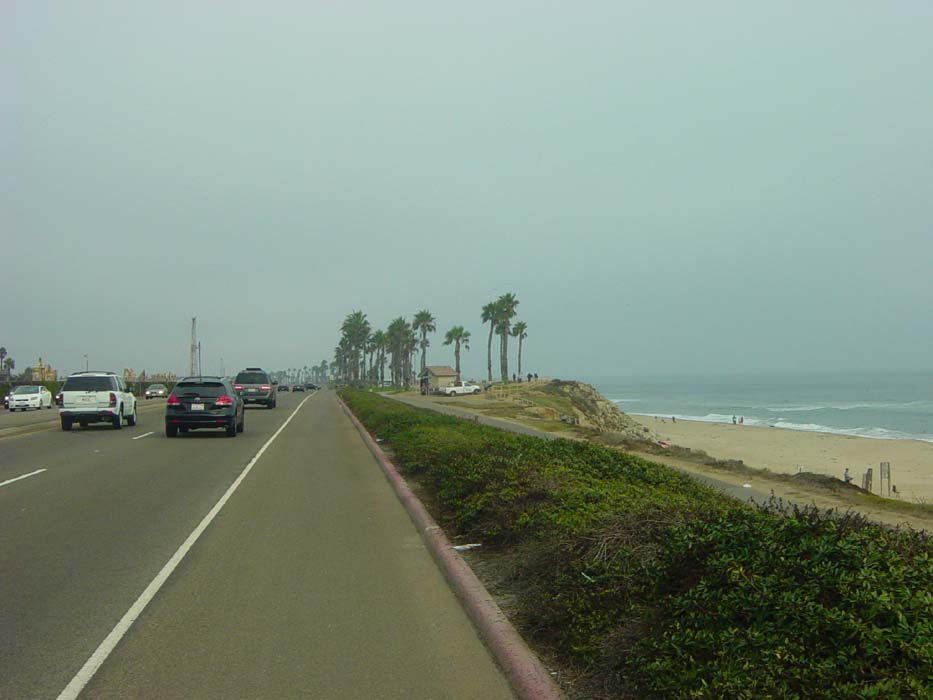 It was getting late now, not just because of my extended lunch break, but also because I spent a huge amount of time today sitting at stoplights. I was starting to get really frustrated about that on several occasions, because it seemed like I missed every other one and then had to sit there for minutes at a time. Missing a light that had nobody waiting was annoying, and so was having to stop because someone had to turn left (hasn't anyone in California ever heard of a green circle that allows left turns when it's clear?). I'm pretty sure I missed at least 25-50 lights today to the tune of 1-2 minutes apiece, easily wasting an entire hour of driving time just sitting in traffic. There was no handy bike path to get me around this stuff either, because the few beach paths were too short to really help, and usually were packed with pedestrians that limited my speed anyway.

See there, just like I said some days ago, I'm not really happy until I get to complain about something. But anyway, the point is, the day was running short so as soon as I found a decent hotel, I stopped. There was a cheaper one that had no internet and no cable TV, but I passed on that one and paid a little bit more for those few amenities (having lacked both last night). The room's pretty nice, as it turns out, and I have no regrets. Here's one last photo from the day, showing what the beach looks like here in town. Nothing but white sand and hardly anyone around, except a few surfers out trying to catch some waves before sunset. 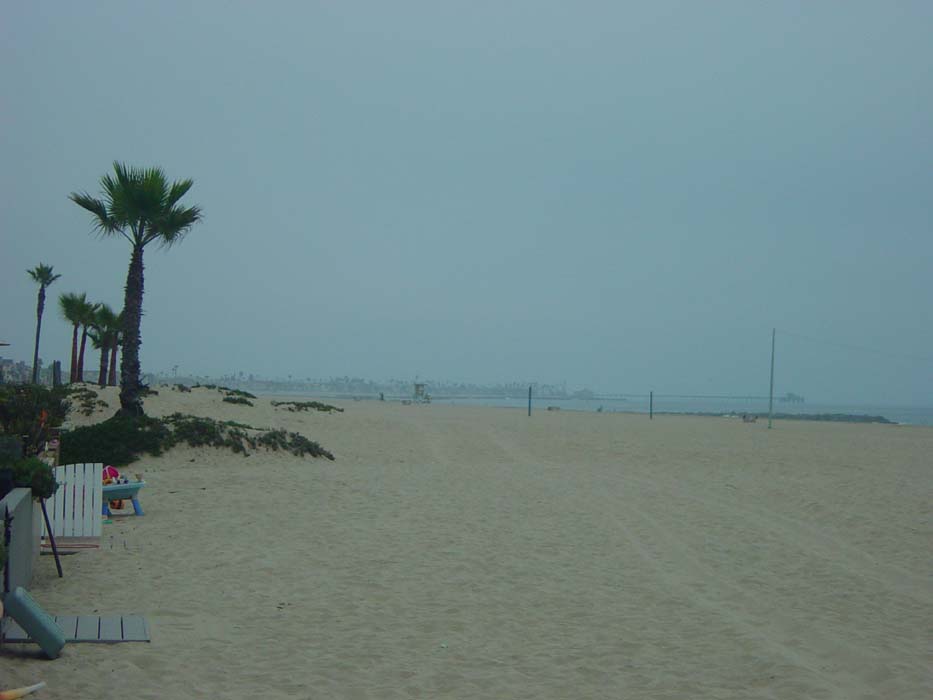 As it turns out, I'm only about 100 miles from San Diego right now, so the ride is nearly over. Tomorrow I have to get through Camp Pendleton, which takes up a big chunk of the coast, so it might take a few more miles than that to actually get to the border.