The primary goal for today was to figure out how to get around Camp Pendleton, which occupies about a 20 mile wide area of beach (and way inland) between where I was and San Diego. Interstate 5 runs through the marine base without any hindrance, but that didn't really help me because I was pretty sure THE SIGN would be there to stop me if I tried getting on the freeway. It is, however, something of a rule in California that if there's no alternative way around, you can take a bike on the freeway, sign or no sign, so I at least had that to think about. I'd also found an online guide that explained, step by step, exactly how to get through this area, but it basically came down to this: "See if the guards will let you through the gate, and if not, get on the highway, and when the police stop you explain that you couldn't go through the base. They might (emphasis mine) let you go on your way." Not exactly comforting, but it was all I had to go on, unless I wanted to spend all day going on a 60-mile loop around the outside of the base.

So with all that in mind and detailed instructions in my pocket, I headed out. The day was overcast and stayed that way all day long, except for a couple of brief moments of sun that didn't last. What did last, however, was the 10-15mph south/southeast wind that hit me in the face for almost the entire ride. The only time I had any relief was if I passed by some trees or a building or something that blocked the constant breeze, but that wasn't very often. Most of the time I just had to pedal through it. I've been pretty lucky this trip and haven't seen a lot of headwinds that stuck around like this one, so I suppose I'm entitled to one day of bad winds, but they sure did ruin an otherwise decent ride.

Anyway, I rode on through Laguna Beach and a couple other small coastal towns that looked mostly like this. The general pattern was a set of hills on the left that were covered with houses and businesses overlooking the water. Most of the hotels I saw probably cost more than where I stayed last night, so I felt a bit better about paying $80 for that room. 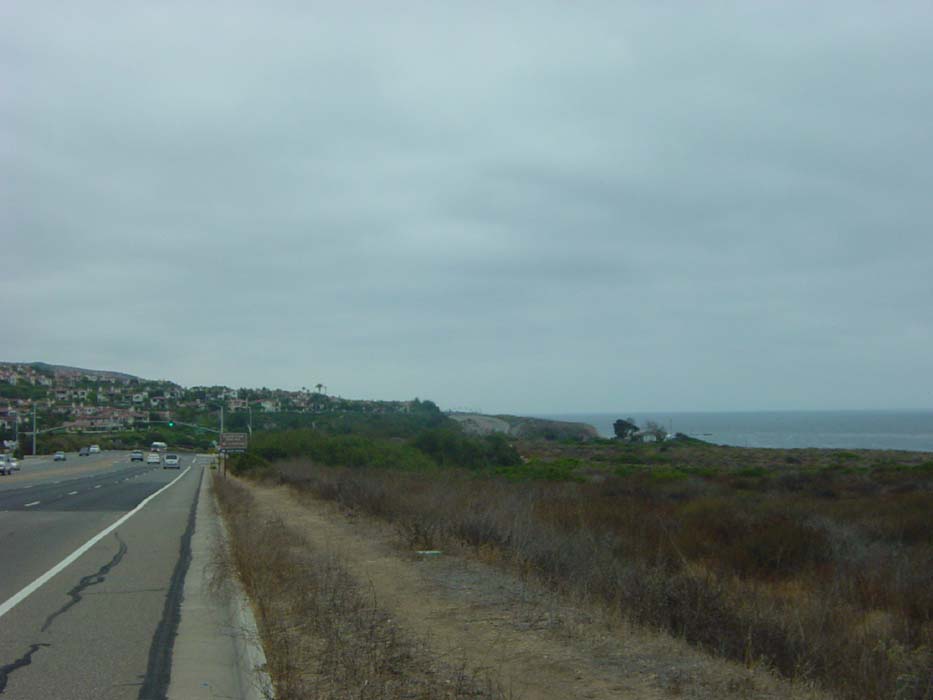 After taking this picture I took a few more shots of Laguna Beach, which was a relatively nice place (and definitely a tourist town), but unfortunately the camera got stuck on low resolution even though I'm quite sure I had the settings correct. Here's an example of what would've been a decent scenic shot that also shows the kind of hills I was dealing with on a regular basis (basically short, but fairly steep, and followed by descents that would've been enjoyable except the headwind slowed me down so much I had to pedal anyway). 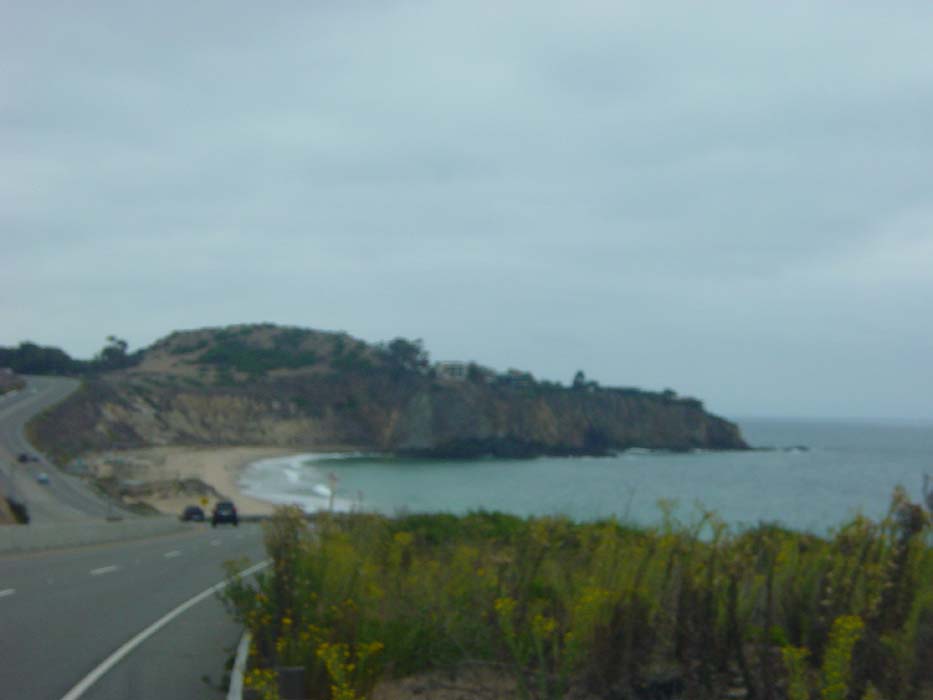 A couple of other pictures came out so bad I didn't even bother putting them on here; they're just blurs of different angles on the beach that don't show anything at all. I went along a water's edge bike path a one point that paralleled the Amtrak line and the train went by while I was riding, and that picture didn't come out either. Too bad. That's the train I might well have taken to San Francisco, had I needed to take that route out of here after the ride's over, but that's not going to be necessary. More on that later, though.

Moving on, I dealt with a bunch more hills going through Dana Point and San Clemente, before finally the Pacific Coast Highway came to an end at I-5 and I had to find the way around. The instructions I was using told me there was a section of "Old PCH" right there at the on ramp, and I did find it, though it looked more like an unused driveway than a street, and there was no label for it at all. After a mile or so of dodging cracks and potholes, I came to an exit off of I-5 that led to a little-used section of beach. There were two cars parked there and a couple of surfers and that was it. A bit further on, though, the road widened and turned into several miles of state park that seemed to stretch on and on. There was hardly anyone here, just a few scattered RVs and tents. I felt like I'd found the world's most forgotten beach park.

Just offshore there was an aircraft carrier, but again the picture is blurry. Probably some kind of top-secret camera jamming field the military doesn't want me to know about. Yeah, that's it. 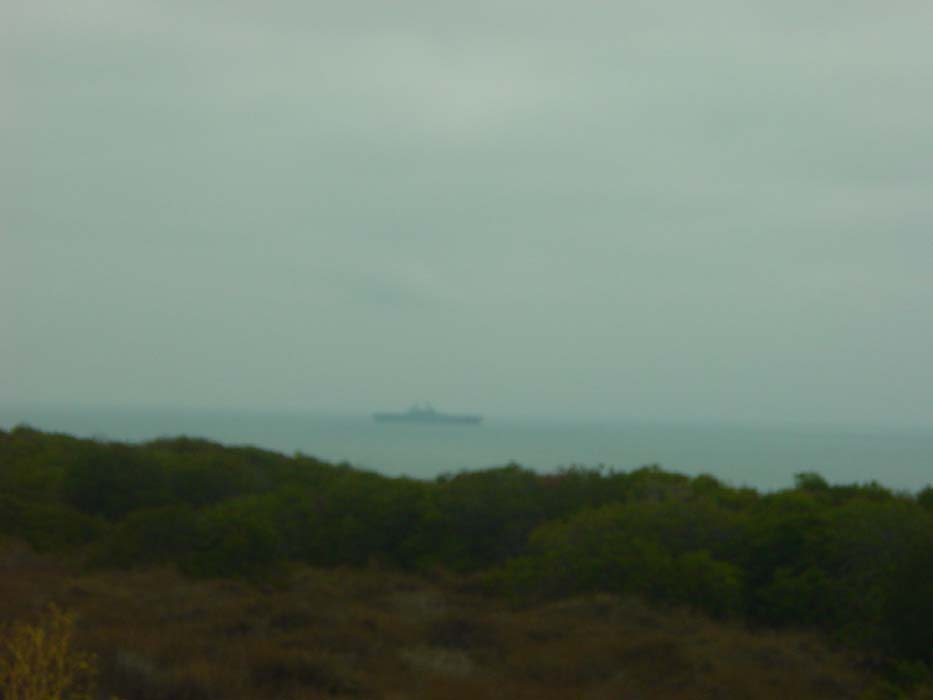 Most of the time I couldn't see the beach riding along this campground, and there were plenty of signs warning of unstable cliffs and for pedestrians to only approach the water through marked trails. Here's a shot looking through a gap in the cliffs. Again, nobody around for miles. If you wanted a secluded spot in a state park campground, this is a good choice. 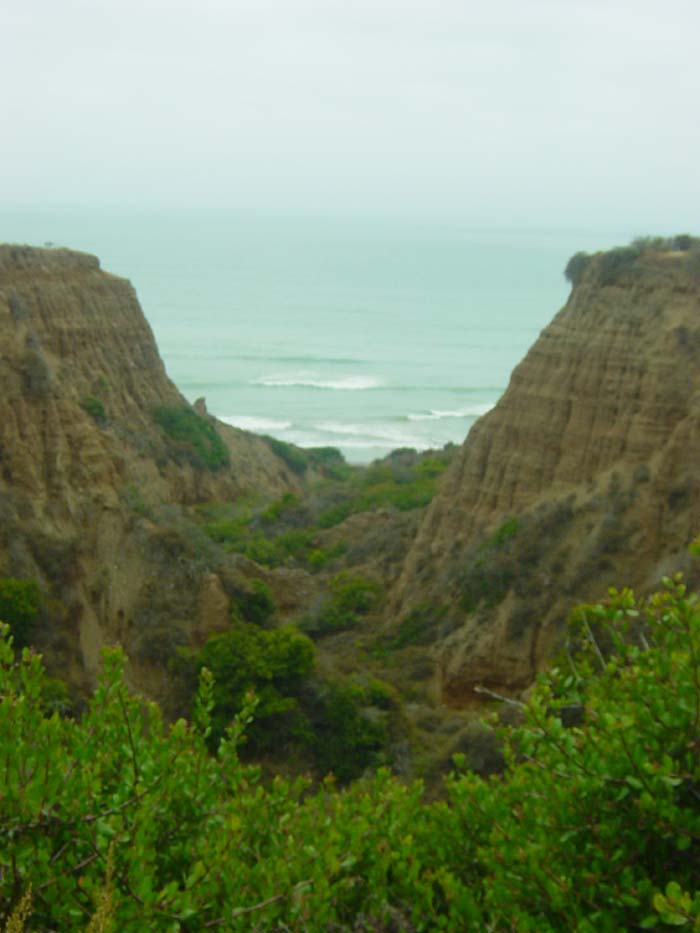 When I finally got to the end of the park, there was this fence marking the edge of Camp Pendleton. You can read the first sign for yourself. The second one, partially hidden in the bushes, says (1) you must wear a helment, (2) you can't wear headset radios and (3) you have to stay on the marked bike routes. This last one is the most important, because according to the guide I read online, if you make a wrong turn or go onto the wrong part of the base, you will be arrested or maybe even shot. (shudder)

You will notice, however, that the gate is open to the left there, and there's lines on the road for bikes, so clearly it's okay for a cyclist to make his way through this gate. I pressed on, nervously. 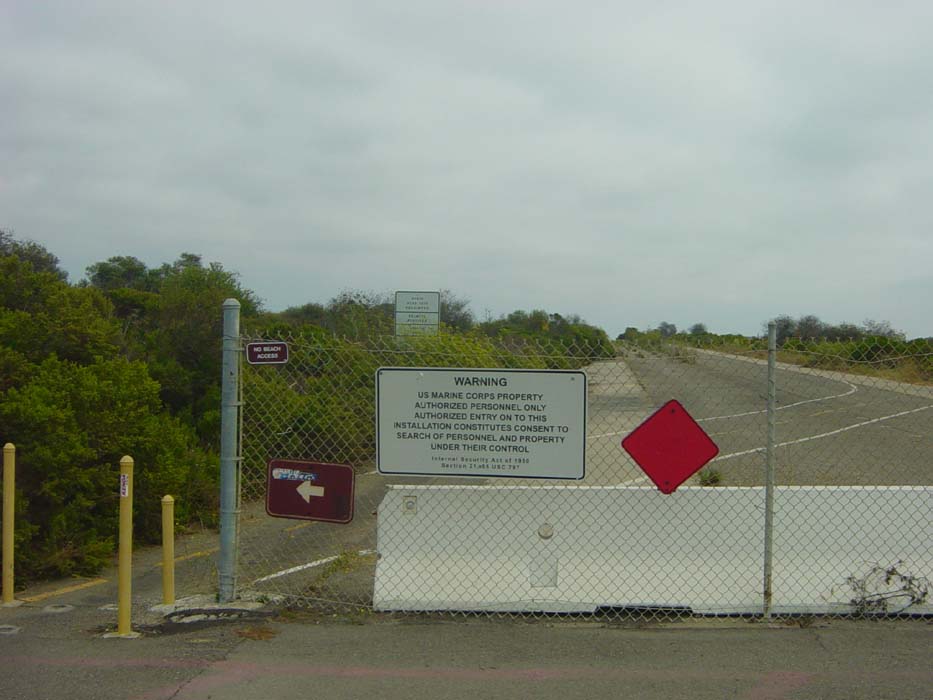 The path was indeed clearly marked all the way along. I was on a section of Old Pacific Coast Highway, and as you can see in the next photo, it wasn't doing very well. This was a pretty good opportunity to have a look at what happens to roads that aren't maintained for decades. (There's more road to the left of all that vegetation. You just can't see it, because it's almost completely overgrown.) 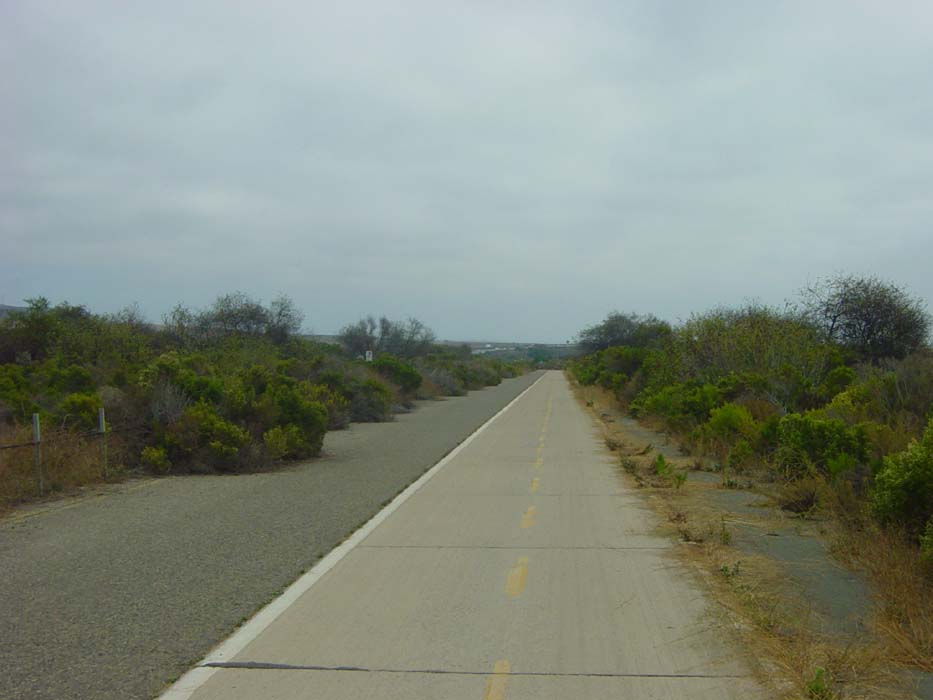 I stopped taking pictures in the Camp Pendleton area at this point because I didn't want to get arrested or shot. A short distance ahead of this photo, I came upon a military convoy loading bombs onto a flatbed truck. Nobody did anything to stop me as I rode tentatively on past. Five minutes later the entire convoy rolled up behind me on their way somewhere, so I got the hell out of their way and let them go by. Again, nobody seemed to care I was there, so I continued on.

When I reached the halfway point, there was a manned gate I couldn't go through (having no military ID) so I had no choice but to get on I-5. However, THE SIGN wasn't there to stop me so I got onto the far edge of the shoulder and hurried out of there. The shoulder was wide and clear and I didn't have any problems, plus there was a handy rest area in the middle of the 8-mile section of freeway I was using, so I got to refill my water and use the restroom. Then I moved along towards Carlsbad and managed to get this picture just before leaving the highway. Like I said, it wasn't all that bad on I-5, except it was excessively noisy. 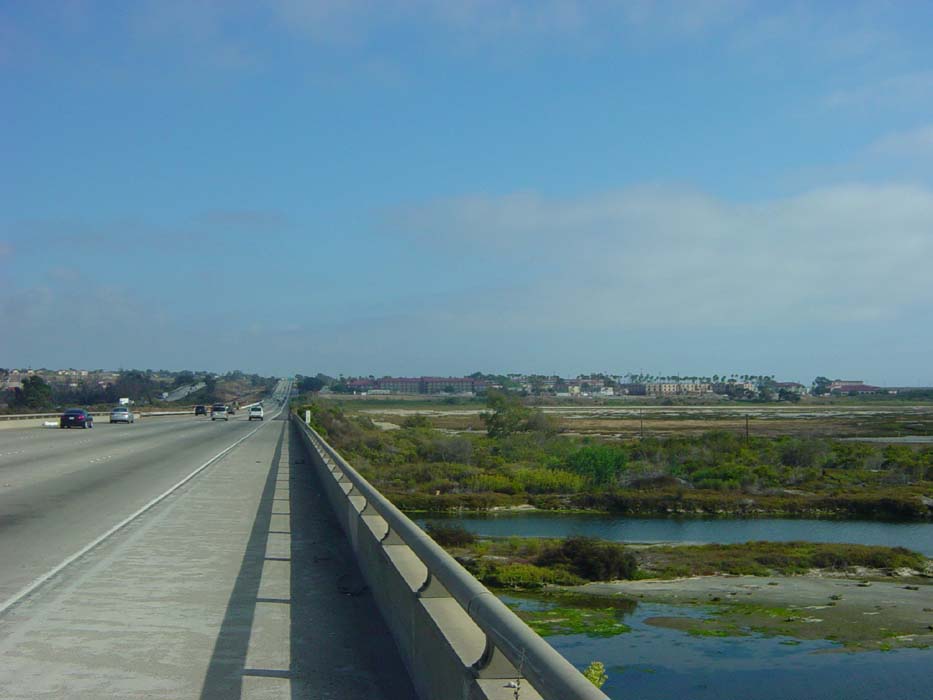 Also, that happened to be one of the few moments the sun actually came out. Most of the day looked like the next photo. This shot was taken after I'd decided to not stop in Carlsbad (it was only 4pm and I'd gone about 50 miles) but head on towards Del Mar and a few other small towns where there were sure to be hotels. I think this town is Solana Beach, but I could be wrong. Again notice the short but annoying hill I have to climb, which was typical of the day's ride. Also note the jogger coming towards me. Joggers, walkers and other bicyclists were everywhere along this coast (although I didn't see any on I-5). 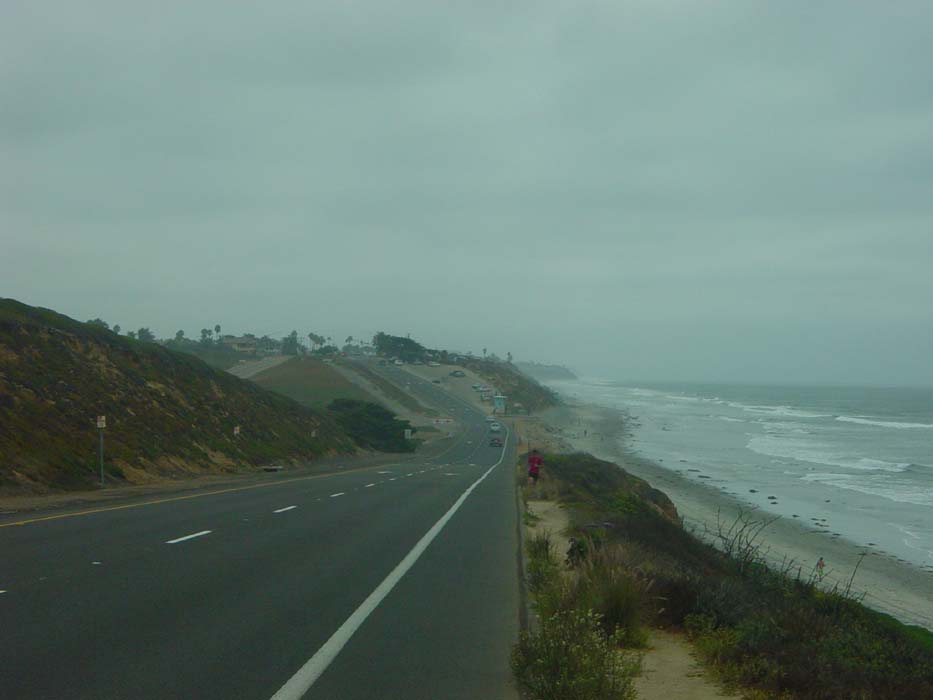 Here's another beach town, I believe Del Mar, which looks almost the same as the previous photo but was actually several miles further down the road. Some of the cars approaching me have lights on, because it's getting late in the day at this point. I was really expecting to find some hotels along here somewhere, but there just weren't any. 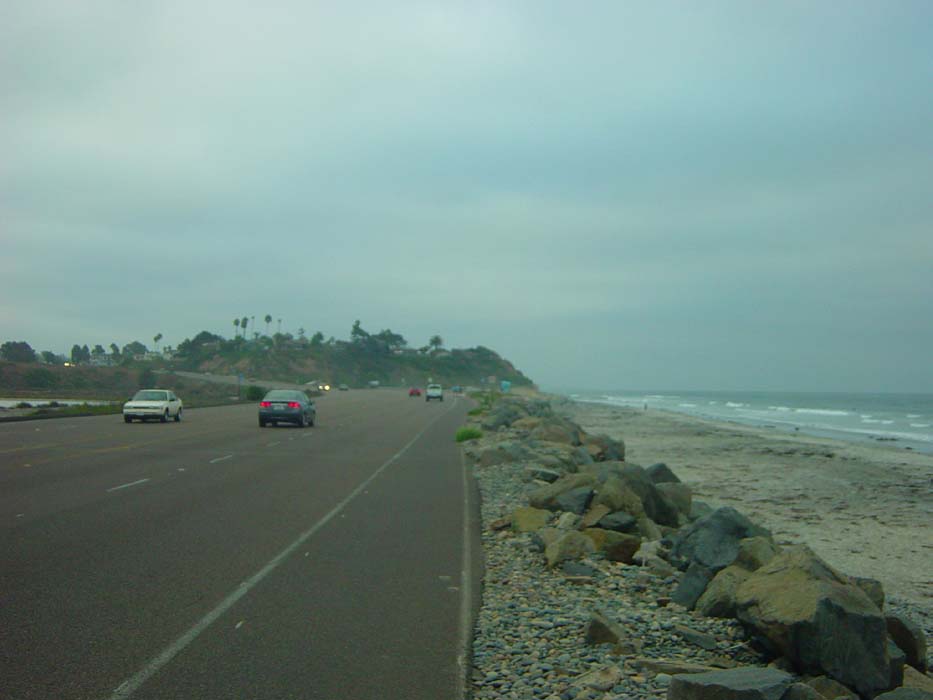 Now it's getting really late. The sun's hitting the horizon, most of the cars have lights on and I'm getting worried because I passed all the way through Del Mar without finding anyplace to stay. Worse, the road curves away from the beach and heads up into those hills there, an area called Torrey Pines. This hill proved to be almost 2 miles long and very steep, the worst hill I've seen since just before Santa Barbara. By the time I got to the top, and began meandering along through the University of California at San Diego campus, it was completely dark, and still no hotels anywhere, except a Radisson and Hyatt that were way out of my price range. 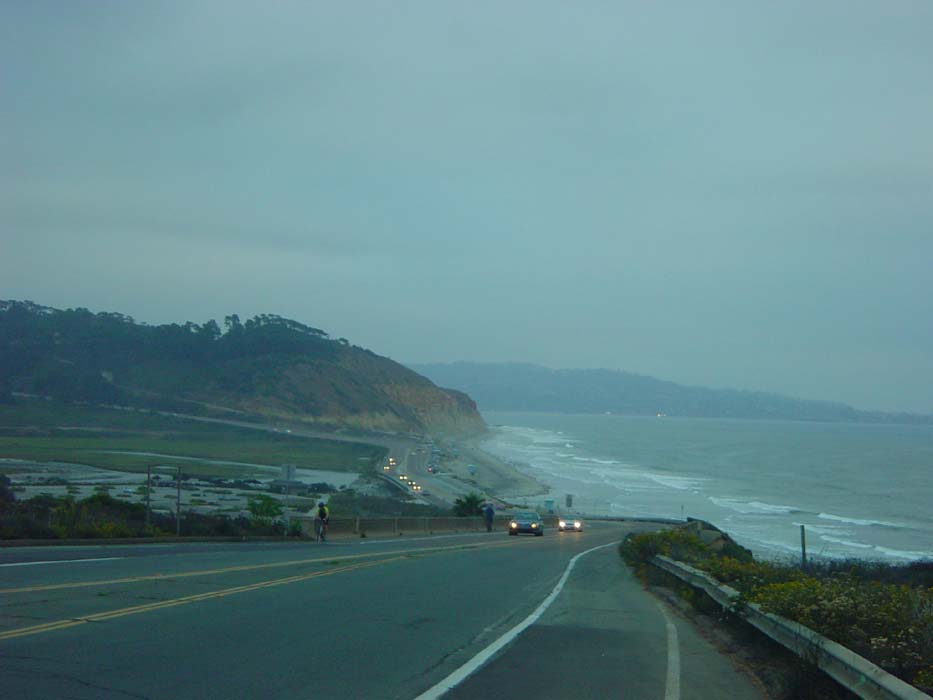 So I did what I usually do in this situation, I called Phil and got him to give me directions to the nearest reasonable hotel, which was about 5 miles away. That was 5 miles of difficult climbing in the dark (I had lights on the bike, of course, but they don't really illuminate everything). I found out later the reason I didn't find any hotels was because I should've taken a turn at one point that would've run me into a whole pile of them. I somehow managed to go the only possible way into this section of town that just happened to avoid all the places to stay.

On the good side, though, the extra long ride put me into the actual suburbs of San Diego, so now I can finish the ride tomorrow with a run through the city and down to the border. Then I stay a couple of days in the local area before flying home on Friday. As for shipping the bike, it turns out REI will pack and ship your bike for a fee of $60, which is fine as far as I'm concerned, because by the time I shipped the bike case down here from Seattle, and stayed until Monday waiting for it to show up, I'd spend an awful lot more than that. Plus I managed to get a great deal on a one-way flight because at some point overnight somebody cancelled a seat and I was able to pick up the spot. So all my logistical issues are solved; all I have to do is take care of business tomorrow, and then it's time to take it easy.