This shaped up to be a pretty nice day...hardly any clouds (until after I'd stopped for the day, when a thunderstorm threatened to roll in) and the usual heat, but I think I'm getting used to that now, because I can go longer without breaks and bounce back quicker after each one. Of course, this is still all happening with a tailwind or (worst case) crosswinds, not headwinds, and few hills to speak of except for the occasional bridge...but I welcome those anyway for the views, and the gust of cool breeze at the top. Not to mention the occasional hawk....more on that later.

I think I've settled my body into the usual "touring" routine now, too. Except for the annoying minor nasal infection (and now an occasional cough), I'm feeling pretty good. I no longer feel the need to eat anything until the ride's over, either. I know that sounds weird, but it's the same thing every time...I feel nauseous and out of energy for the first week or so until finally I stop eating breakfast (or lunch, for that matter) and just ride on. Last night, I had 5 pieces of a large Domino's pizza (saving the rest for later) and then got up today, left at 10, rode until about 5:30pm, and never really felt like eating anything. It sounds unhealthy and you'd think I'd bonk (i.e., run short of energy and collapse), but nope. I didn't even have any Gatorade today, either...just some fruit punch at Wendy's around 2 o'clock. That's it. So yeah, it sounds ridiculous, but it works for me, I guess...and don't worry, I still carry cookies and a couple other snacks in case the fingers start getting numb.

Today I spent no time at all on US-1, heading immediately out to A1A to ride along the beach...which spent most of the day about 50 yards to my right, on the other side of buildings or vegetation. Sort of like this picture here. At least I had a really nice bike lane, though. I wish we had those back home.

If I wanted to see a beach, I basically had to stop and go out on one of the walkways to a public area. These tended to be more and more frequent as I got farther and farther away from the larger towns. This picture below is looking back at the Vero Beach area. As you can see, there are some homes (I asked a couple people what it cost to live in a place like this, but nobody seems to know) but not too many people.

The rest of the morning followed A1A in between the ocean on my right and the intercoastal waterway to the left. Occasionally I'd get glances of one or the other, like this glimpse to my left, but mostly I looked at roads and bushes.

About noon I came to a small state park that had its own little museum, which looked like a nice spot to take an hour or so break. It turns out this section of beach is known as the "Treasure Coast" because one of the Spanish treasure fleets sank here during a hurricane, and as a result the place is littered with shipwrecks. The survivors gathered together and made camp right on this spot and were eventually rescued by ships from St. Augustine. The governor there sent recovery teams, but other national powers declared open season on the wrecks, and pirates showed up to get involved, too. (This event is actually what eventually led to the rise of buccaneers in the Caribbean.)

The museum's displays and video presentation explained all of this, as well as how modern-day treasure hunters eventually started combing the area looking for gold, silver, jewels, and other artifacts from the 1700s. There's apparently a huge cache of priceless jewelery still out there somewhere, originally intended as the dowry for the Queen of Spain, but nobody's found that yet. Fascinating stuff, and well worth the $2 entry fee into the museum to learn about it (and get me out of the sun for an hour). Anyway, here's a picture of the entrance (click on the pic for a full-size version so you can actually read the sign).

This is a look at the interior, where they had all kinds of displays and relics (mostly replicas, probably to keep the thieves away) as well as plenty of other historical stuff, like the diorama on the left, which showed what it looked like in the survivor's camp. Remember, back then Florida hadn't been settled, so there weren't any handy roads or settlements, except for St. Augustine hundreds of miles to the north. I can't even imagine what the mosquitoes would've been like... 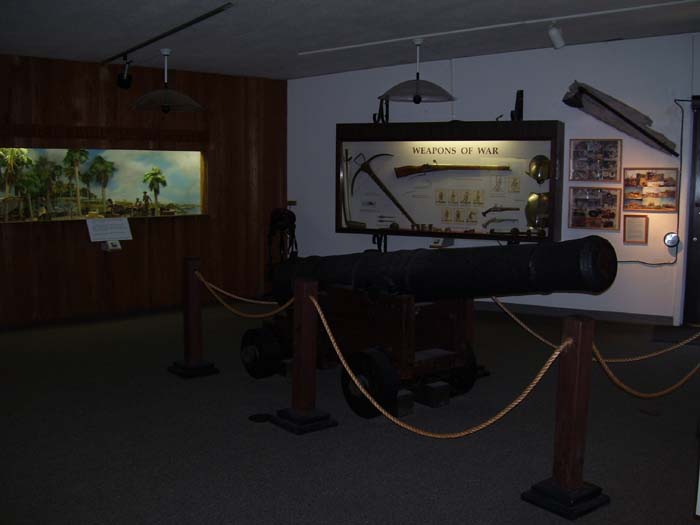 Out the back of the museum they had a short walking deck (with plenty of information on local plant life) that emerged at the beach, shown below. This looks pretty much like the last beach, except it's deserted. This whole section is private land.

After that I rode on and soon came to a bridge, which is where I had my most surprising wildlife encounter of the trip so far. Sitting on top of a short pole along the edge of the bridge sat a hawk, looking down into the water below for something to go after. I rode right up to the bird, thinking it would fly away, but it showed no fear of me at all. I stopped about 10 feet away from it and took this picture while it watched me warily. Yes, it's really this close. I had time to snap off this one photo, and before I could even contemplate anything else, the hawk flew away. Pretty amazing encounter, really.

Speaking of that bridge, anyway, here's a look out at the water from up top. Not much to see here, except the way the water changes shades is pretty cool. 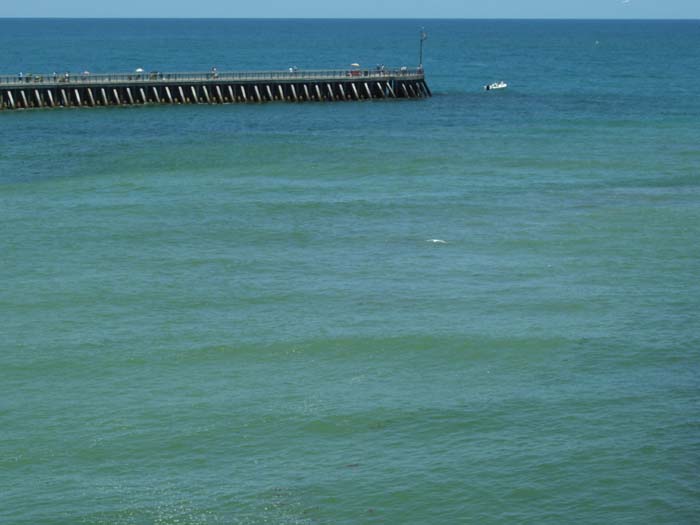 That's the last time I'd see water for a while, because down the bridge, it was off into the trees again. 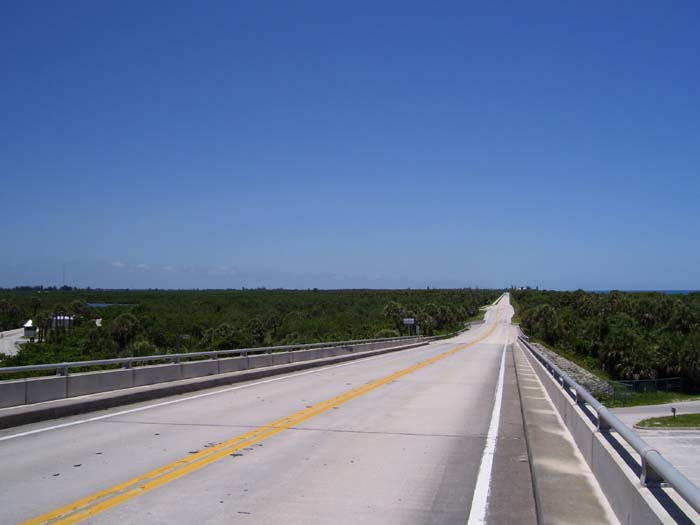 A couple of hours later (after the Wendy's break), I stopped at another small beach park and actually used the restroom (that's another funny thing about me touring, I rarely if ever need to use the facilities once I get going...you'd think I'd get dehydrated, but nope). Just to show how much the beach has changed since I started the day, here's another picture. I know it looks like the last two beach shots, but really, this is 40 miles down the road from the first one. 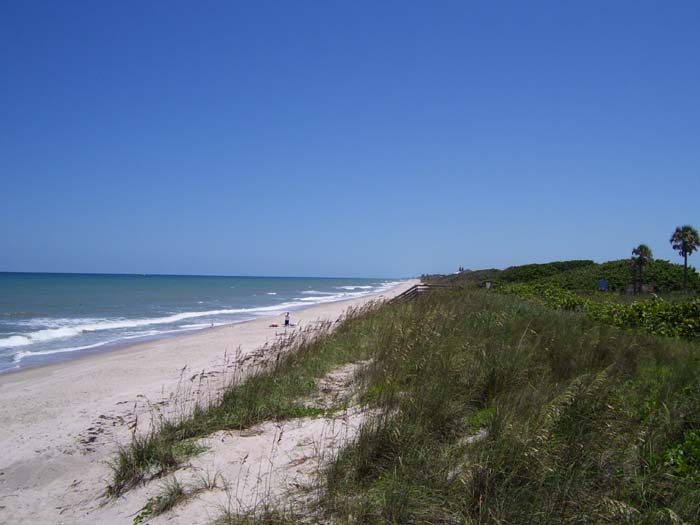 Looking the other direction, towards Cocoa Beach, barely visible as a couple of bumps on the horizon (about 15 miles away). Again, there's hardly anyone here. Seriously, if you're driving along the Florida coast looking for a beach (or if you're visiting Orlando and want to head off for a few hours), don't just pull off at some major town and get caught up in the crowds. Get on A1A and drive a few miles out of town. There's plenty of virtually deserted spots you can pick from. 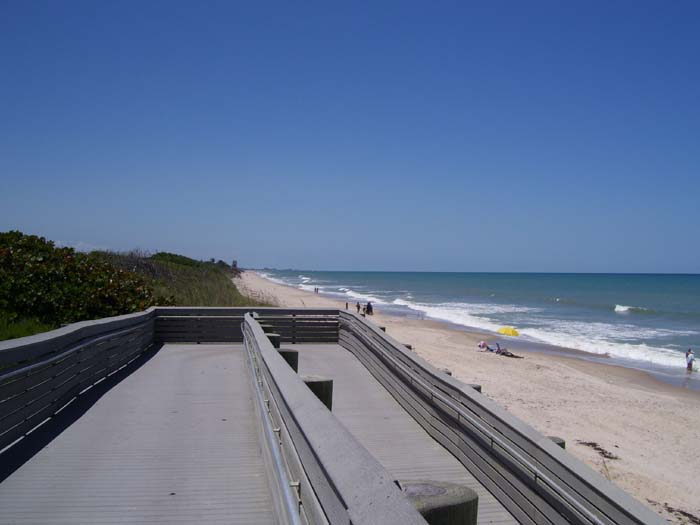 I've been seeing this sign a lot along the coast, so I thought I'd share it (click the picture for a close-up). They take care of their wildlife here in this state, that's for sure. 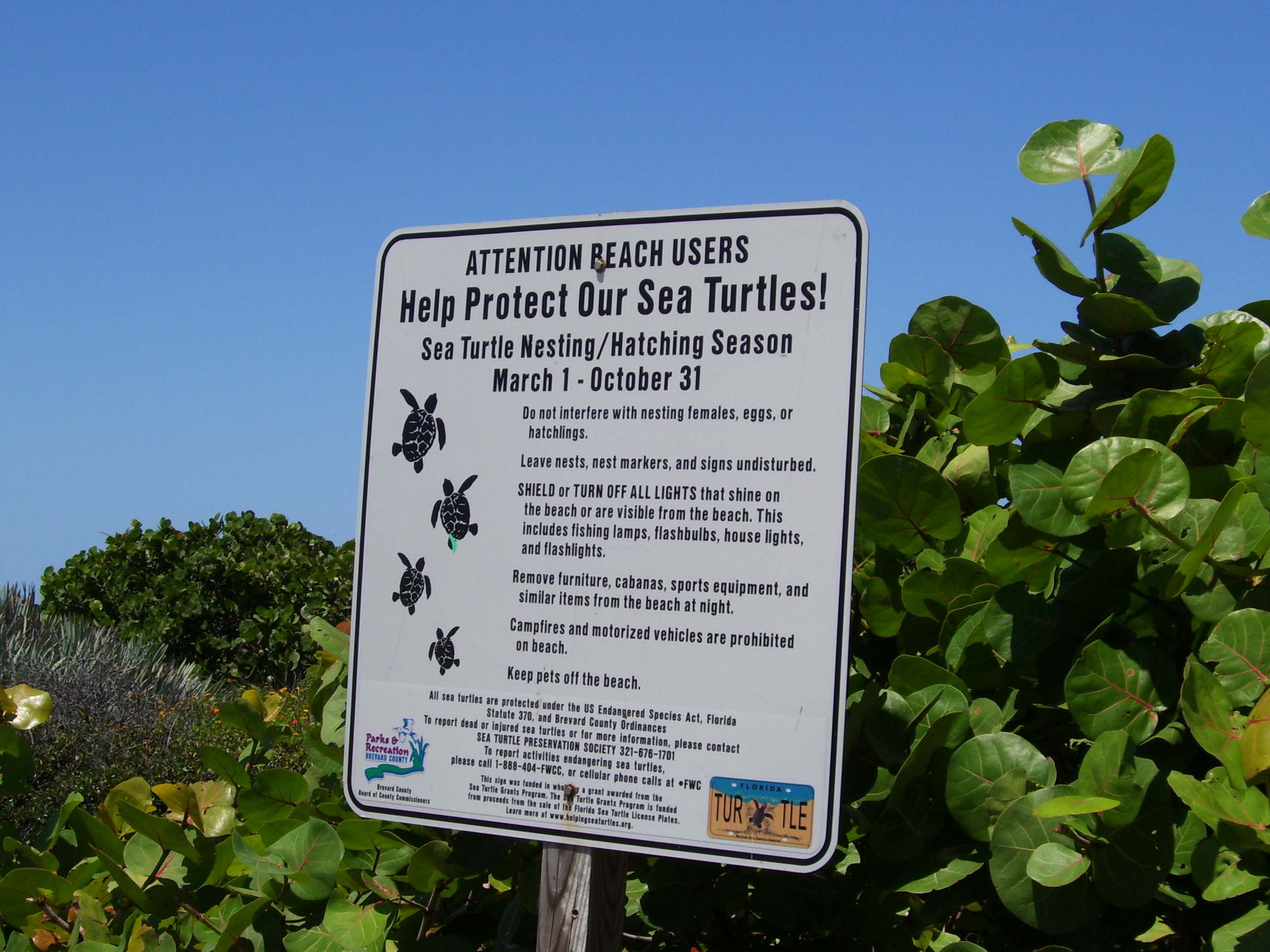 After this stop, I undertook my longest ride without a break so far this trip...a whole 15 miles! It doesn't seem like much, but especially coming at the end of the day, it's an indication things are really getting better. I finished off the day at Cocoa Beach, shown below, where as you can see it's a whole lot more crowded. 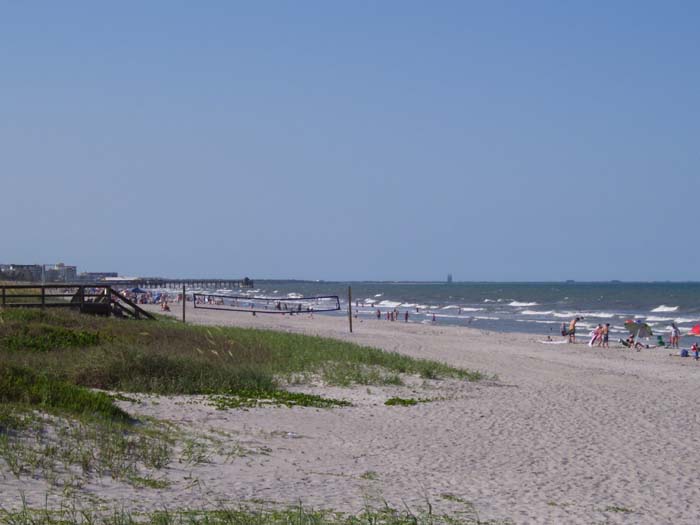 Then it was off to the motel, some pasta for dinner, and some scouting out tomorrow's route, then bedtime. That's the end of my first full week of touring, too. In 3 or 4 more days, I might even get out of Florida.