Got a suggestion, tip, or question? Send me an email!

Since concluding my trip down the west coast (see link above), I've been thinking about trying the opposite coast as well, traveling from Florida to Maine, and possibly all the way to the Canadian border. The problem is one of timing--you have to start an east coast tour early in the year, because otherwise it gets too hot and humid in Florida and the Carolinas, and if you wait too late in the year, it's hurricane season. I couldn't make the arrangements last year and did a weeklong trip to Germany instead. However, as it turns out, Ohio had an extremely mild winter this year, so I managed to ride every day without having to resort to an indoor trainer...so the timing seemed right to get an early start. I wound up waiting until the first week of June anyway (which might turn out to be too late...I'll find out once I start riding through Florida, I suppose), but at least it's not summer, right? 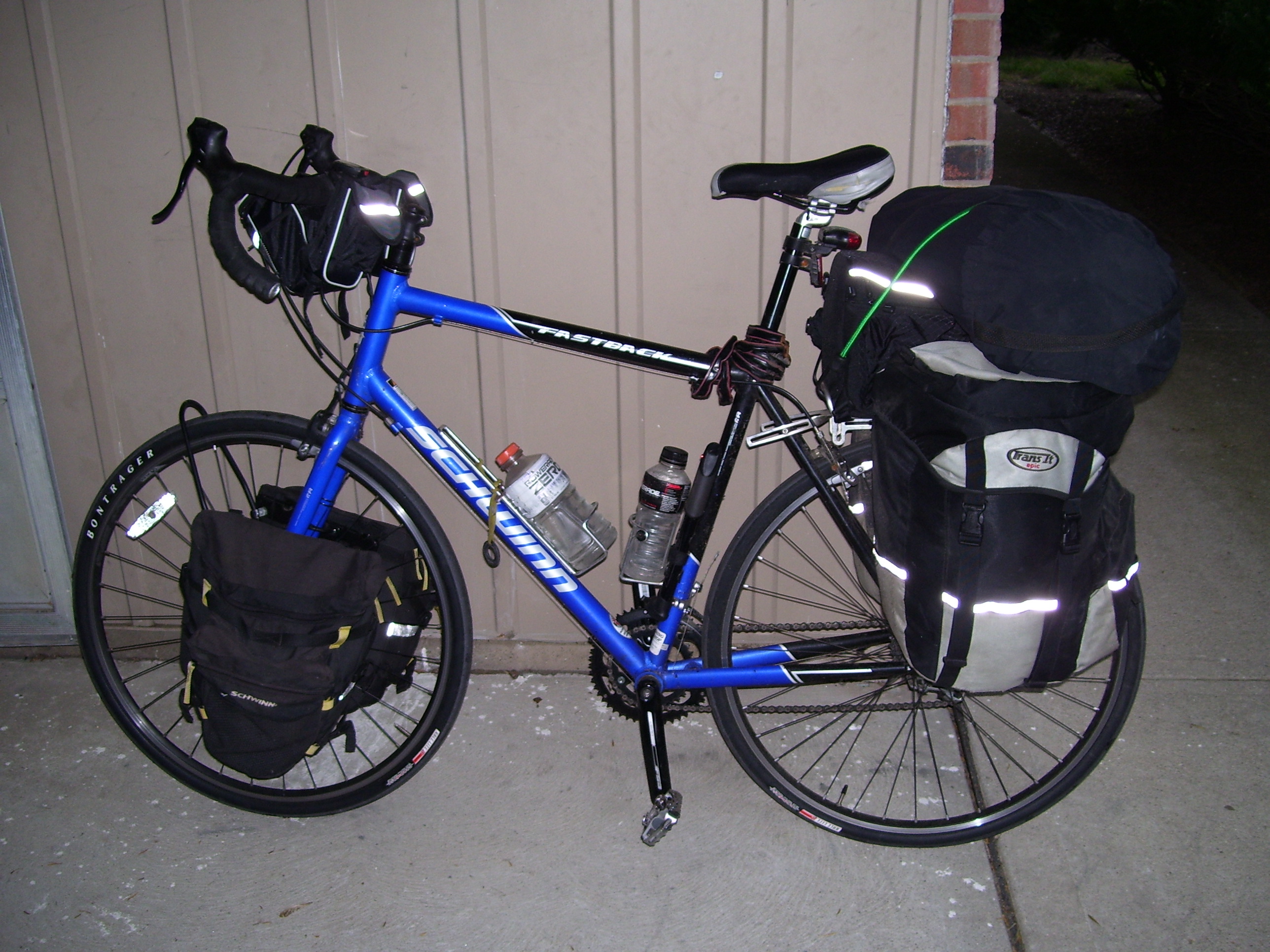 28 May
Planning for this ride actually started a couple of months ago. I've been riding this same bike for about 8 years now and for well over 20,000 miles, so some things needed fixing. Over the preceding weeks, and at various intervals, I wound up replacing the rear wheel, chain, cranks, and freewheel, plus a few other minor repairs. Also upgraded were the cyclocomputer, rear trunk bag, lights, tires, and backpack, and I've also added a front rack and panniers, a cycling GPS (see below), a frame pump, and a handlebar bag. Otherwise, it's basically the same bike that went on the west coast tour (including the rear bags and camping gear). You might recall I didn't use a front cargo rack during that trip, and while it worked, I went through 2 rear tires (including a near-disastrous blowout in the middle of nowhere), so this time I'm trying a little more balance. Click on the picture to the right for a close-up look at the fully-loaded touring bike with all these new features.

In addition to the upgrades, I had to actually get physically ready for the trip. I've made a habit of riding 10 miles a day every day (June 3 is my 3-year anniversary, actually) but that's not quite enough to prep the body for 50+ miles a day with all the gear I'll be carrying. So for the last month or so, I've steadily been adding miles and weight to the bike. Yesterday, I actually loaded everything up including all the camping gear, and did a 34-mile ride in 95-degree heat without any problems...so I might just be good to go.

As usual, there's also the logistics issues of actually getting the bike to the starting point, which will be Key West. Getting the bike there might've been a problem, because large jets don't fly into that airport, but as it turns out, you can ship parcels directly from one UPS store to another and they only charge a very small "receiving fee" at the other end. Then you just show up after you arrive and pick up your packages. They even advertise it on the UPS store website as a service for people traveling with a lot of luggage, because it'll actually be cheaper (sometimes a lot cheaper) to ship your luggage instead of paying outrageous airline fees for them. Of course, the obvious disadvantage is you have to ship the bags way early, but since you probably paid for a non-refundable plane flight, that's hardly an issue.

For me, though, that means I have to ship my bike a week ahead of time, and a separate box with all the camping stuff, bags, and other supplies. Shipping the bike costs about $100 compared to about $150 to take it on the airplane (most airlines charge $75 for a bike and another $75 for the oversized bag, or something similar, which is more than the damn ticket!) and shipping the gear will be about $50, the same as the price to check a bag. (Edit: It actually cost more, because I wound up shipping 2 boxes.) As a bonus, though, I get to fly with only carry-ons, so if I get rerouted or delayed, it's no big deal. (The UPS store will hold the shipment for me and I don't have to worry about it not showing up with the airline luggage, too.) Plus, since I'll pick up the bike at the UPS store, I can put it together right there and ship the case right back from the same location.

29 May
Shipping Day arrived. As it turned out, it cost over $200 to get everything out via UPS Ground, but we're talking about over 100 pounds of stuff here. I suppose I could've taken it on the airplane anyway, probably for only a little bit more, but this assumes they'll take that much, or that they can fit it onto a plane landing at Key West. The airport there is notoriously small, so if I'd tried that, I very well might've wound up sitting around waiting for delayed luggage. Best to just ship it and be sure it gets there...I even insured it all, just to be safe.

30 May
Another thing I did differently this time was buy myself a handheld GPS (a Garmin eTrex 20, if you must know), and that arrived with today's mail. This nifty device can be loaded with all kinds of different road or topo maps, and can guide me along turn-by-turn, which should be a great help in some of the bigger cities I'll be visiting. Also, it keeps track of where I've been, so I can get an exact log of each daily trip (no more relying on Google Maps). Oh, and as a bonus, I can load it up with geocache locations and go hunting, which should spice up my daily bike rides when I get home.

I doubt I'll do much geocaching on the tour, but I gave it a try today, and found a cache about 6 miles from my house. That turned what would've been an ordinary biking day into a mini-adventure. I'll definitely be trying this more.

1 June
The shipment actually arrived in Key West early, on Friday. The UPS store even called me to let me know everything arrived safely. So now I can head off on my flight Tuesday morning without any worries about that. 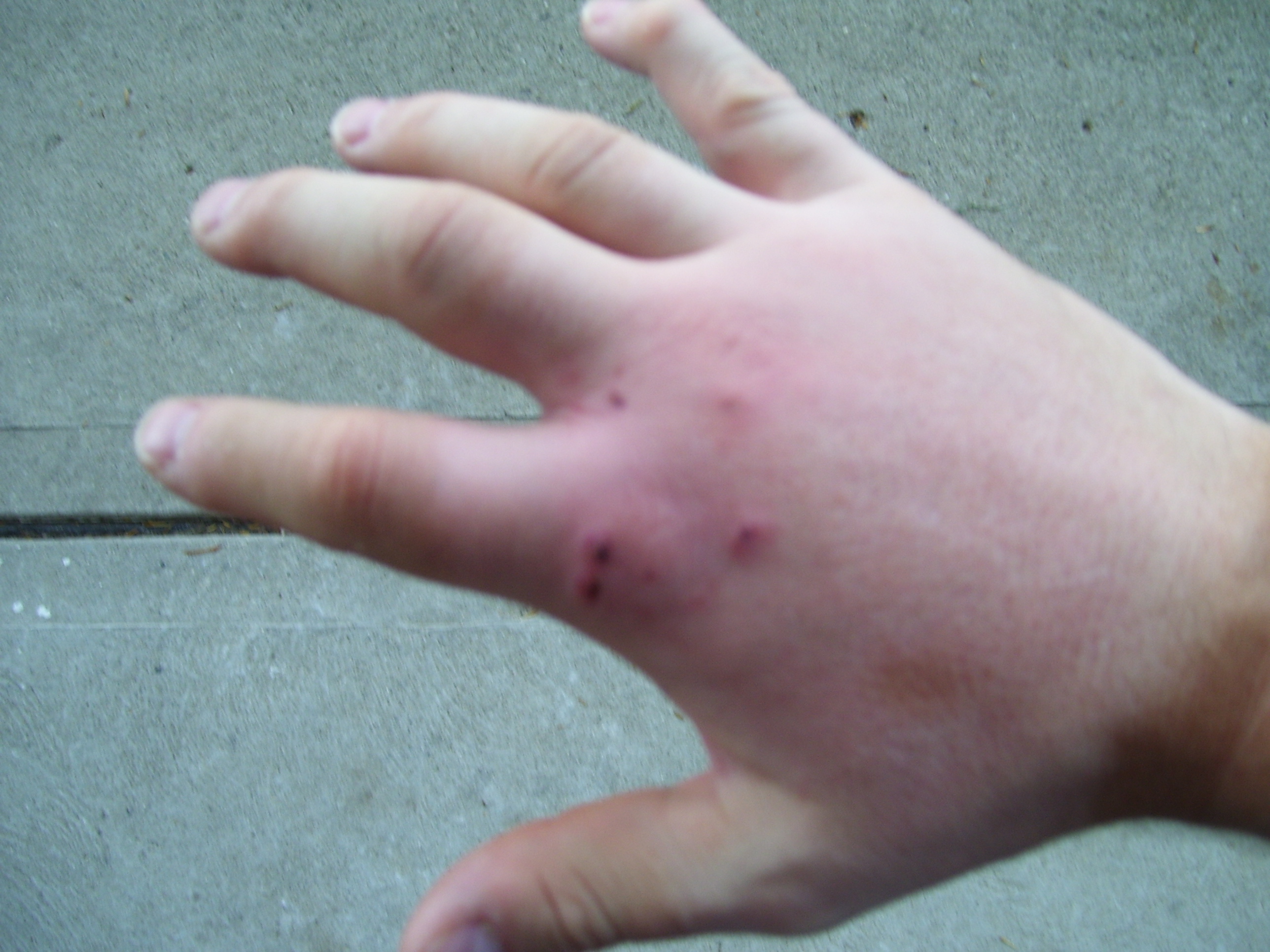 Of course at this point I started wondering what was going to go wrong, and tonight I got my answer...my sister's cat bit me pretty severely (I guess I scratched him in the wrong spot) and I wound up having to go to the hospital for a tetanus shot and some antibiotics. Good thing it's an indoor cat, or I might've had to worry about rabies, too. Anyway, here's a pic of what my poor hand looks like a day later...apparently nearly all cat bites get infected, and this one was no different. Riding is painful and it's hard to grip anything, so I'm wondering how I'm going to put my bike together in Key West, but hopefully the swelling will go down by then.

2 June
Got up real early today to attend my nephew's graduation (the real reason I didn't start this trip 2 or 3 weeks ago). This completely screwed up my sleep schedule, but I'll get caught up later tonight. The hand doesn't feel much better, but at least it's not oozing or getting gangrene or anything, right?

3 June
The hand does feel slightly better. The swelling went down a bit and I can flex the fingers better. The angry red circle (see the picture) is still there, but has faded slightly. Hopefully it'll be even better tomorrow so I can get done with all the last-minute items on my checklist.

Also, today's bike ride marked my third consecutive year of biking 10 miles a day (or, during winter weather, an hour on the trainer) every single day, whenever possible. That's over 1,000 days of daily bike rides!

4 June
This was the day right before any vacation where you basically spend every waking moment trying to think of things you need to remember to bring, and then trying not to forget them. I had a list I'd been keeping for over a week. Some of these items were tasks, like take out the trash (you'll be amazed how bad a trash can will smell if you leave it for 6 weeks), take care of any last-minute work, do the dishes, have dinner with the family, take the cat to a friend's house for cat-sitting duty...that sort of thing. Not surprisingly, these little minor tasks basically took all day. In fact, they took so much time that I never did quite get around to going to bed...

5 June
...which was okay because my flight departed at 5:20 am, meaning I would've had to be waking up at 3:15-3:30 am anyway. Right about 3 am, I finished the last of the "optional" pre-trip tasks, took a quick shower, and spent the next half hour or so trying to remember anything I might've forgotten. There were some items that wound up not going on the plane, like toothpaste, ointment, and laundry soap, all of which could've held me up in security. I wasn't too worried about Dayton security, or my first stop in Charleston (SC), but in Tampa, I actually changed airlines, which means another trip through the Line of Doom...and with only a 50-minute window to make my flight. As it turned out, I made it to the gate with about 3 minutes to spare. Security at Concourse C in Tampa was SLOW!

But in the end, I got to my destination on schedule, and the adventure began. Click on the links below for daily logs!

Part 2: Georgia and the Carolinas

Back to Main Bikeabout Page