Huntington Beach to Redlands
Miles: 92
Terrain: Flat or slightly uphill the first half, lots of little climbs the rest of the way
Weather: Sunny with light southerly winds turning west as I moved inland

Last night I plotted out my route for today, and reserved a hotel just in case, since I'd been told the one I got last night was sold out when I arrived. To avoid any chance of that happening again, I made sure I had one picked out. Unfortunately Redlands is a fairly wide town and the hotel is on the far side. Plus I took a couple of unexpected detours that jacked up my mileage quite a bit. 92 miles is more than any day the entire last tour I took, and this is just the first day! Most every part of me is sore, so I'm going to sleep a long time tonight.

The ride started out with a detour of what I thought was only a couple of miles but wound up being 10, just to get one particularly special geocache (a webcam cache, if you're curious). There are less than 100 of these in the world since new ones are no longer allowed and ones that get deactivated are gone forever. Any time I get near one, I always try to go get it. They're easy...you just take a picture of yourself with the webcam, and that's it. Why they're no longer allowed, I have no idea. Anyway, that ate up about an hour, but I got started at 8:30am so I thought it wouldn't matter much in the end.

Most of the rest of the ride was on the Santa Ana River Trail (SART), a bike path that follows the river about 26 miles, then disappears, and starts up again a bit further on. The first part of this was pretty easy. I had a tailwind, which was great, and while it was going gradually uphill along with the river, that didn't bother me too much. Once I left the path, though, it started getting hilly. Nothing too horrible, but there were lots of them and I'm afraid I'm just not ready for that. After about 65 miles my breath started getting short (haven't had that happen in a while, but it's a familiar enough thing to not really worry about, other than I just can't overstress on the climbs). After 75 miles I started getting cramps in my right leg. A long water break took care of that, but not the physical exhaustion. The last 10 miles were the worst, as I could only plod along in the dark (the sun having long since set by this point...stupid short days in winter) and stopped several times to get caches I didn't really need, just to give myself a rest.

At long last, though, I reached the hotel and had a shower at about 8:30 (right around 12 hours after I started this morning) and that's when I started getting hungry. Fortunately there was an Old Spaghetti Factory just two doors down, so I walked over there and had a giant spaghetti feast. Just what I needed, some carb-loading! We'll see if that helps at all tomorrow because right now I don't feel like I could pedal much at all. I won't be reserving a room for tomorrow yet...there are plenty of hotels between here and Indio, so I'll just ride and see how far I think I can make it. Getting all the way would be ideal, but I doubt that'll happen.

Anyway...pictures! Of course with this being the actual first day of the real ride and not just a warm-up exercise, I had to make it official by going out into or over the water. Since the beach was so wide and pushing the bike through it such a pain, I just went out onto a pier, which put me right into the Pacific. This pier in Huntington Beach fit the bill quite nicely. As you can see from the second photo, the bike is indeed over the ocean. 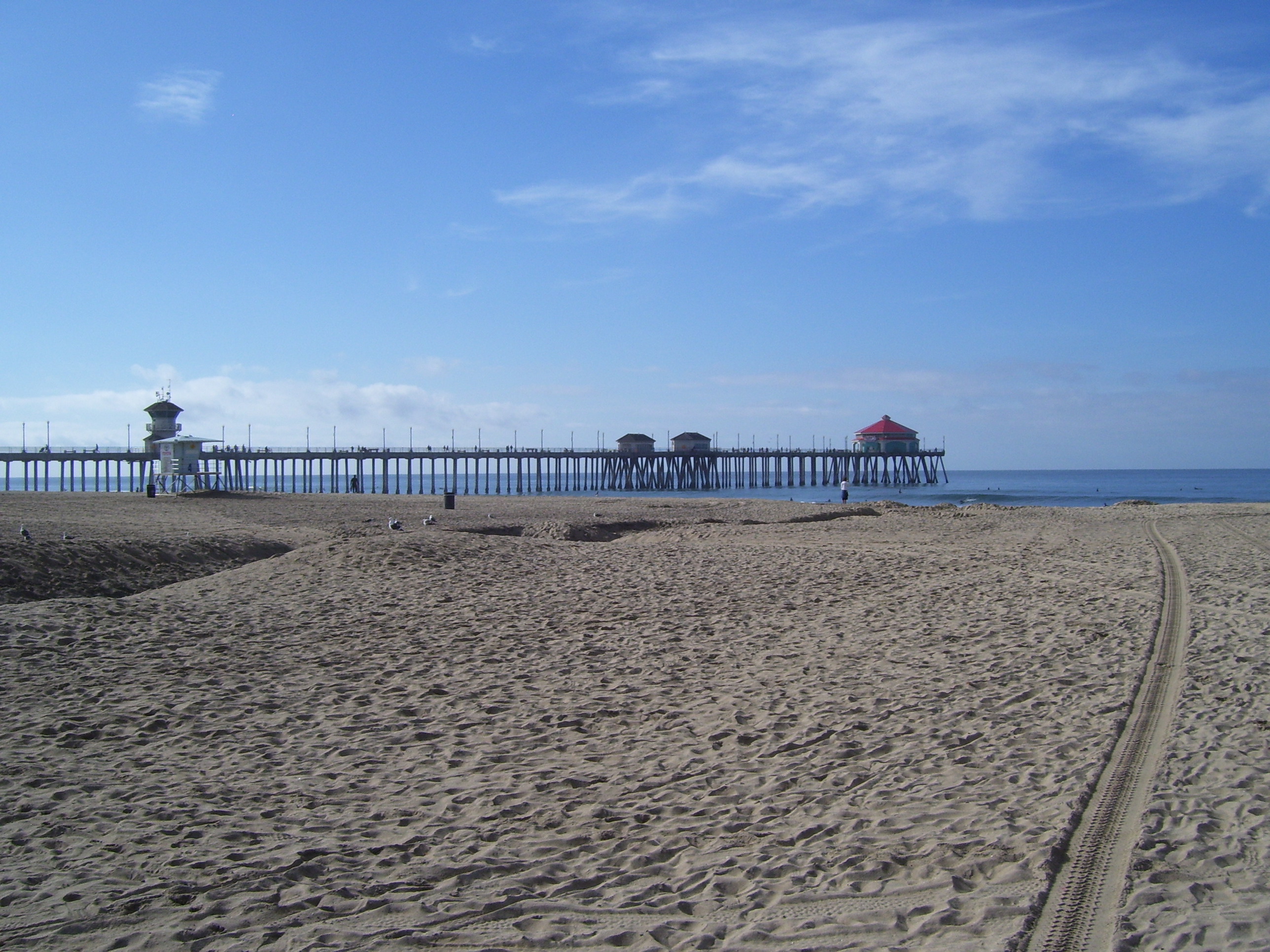 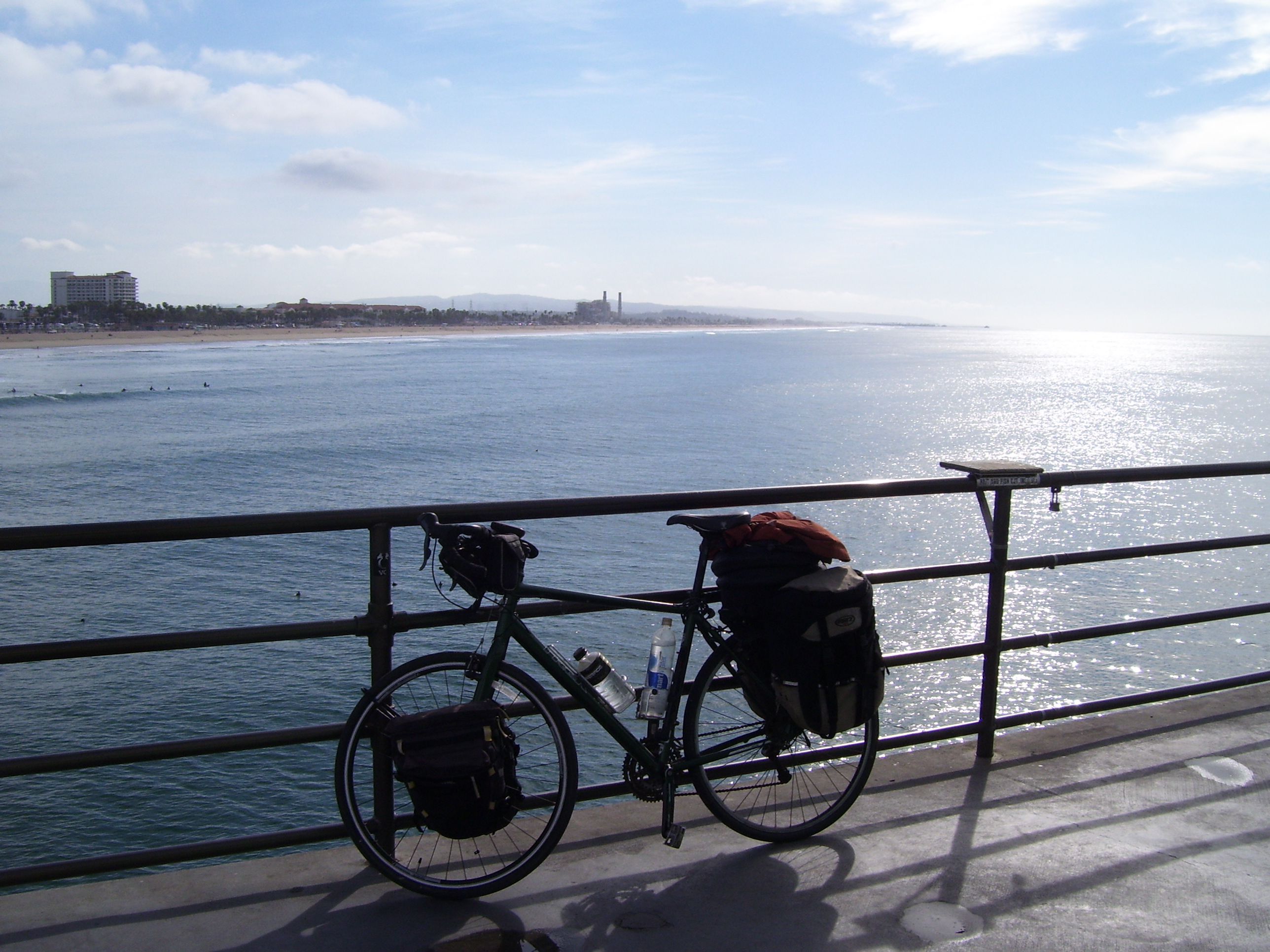 Doesn't look all that loaded down, but man is it heavy. I hope I don't ever have to carry it up any stairs. Anyway, here's a view of the beach from close by. 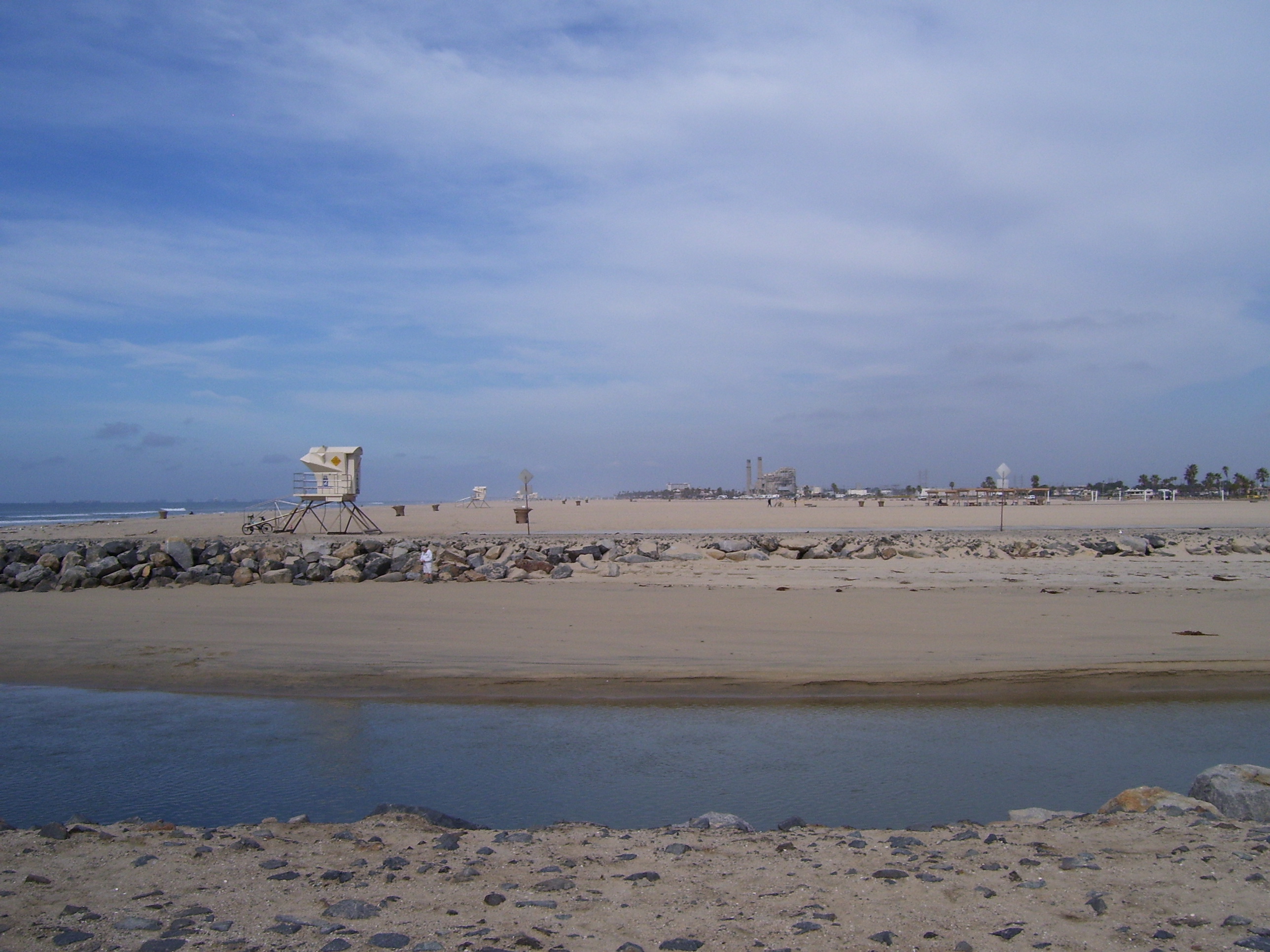 From here I rode down to Balboa Penninsula to do that webcam cache I was talking about earlier. There's a neat little ferry that runs from the end of the penninusla back over to the main road. The webcam is right here, but I took a shot of the area using my camera too. The ferries run every couple of minutes and only hold about 3 cars, but then they don't really go very far...just to the other side of the bay here. 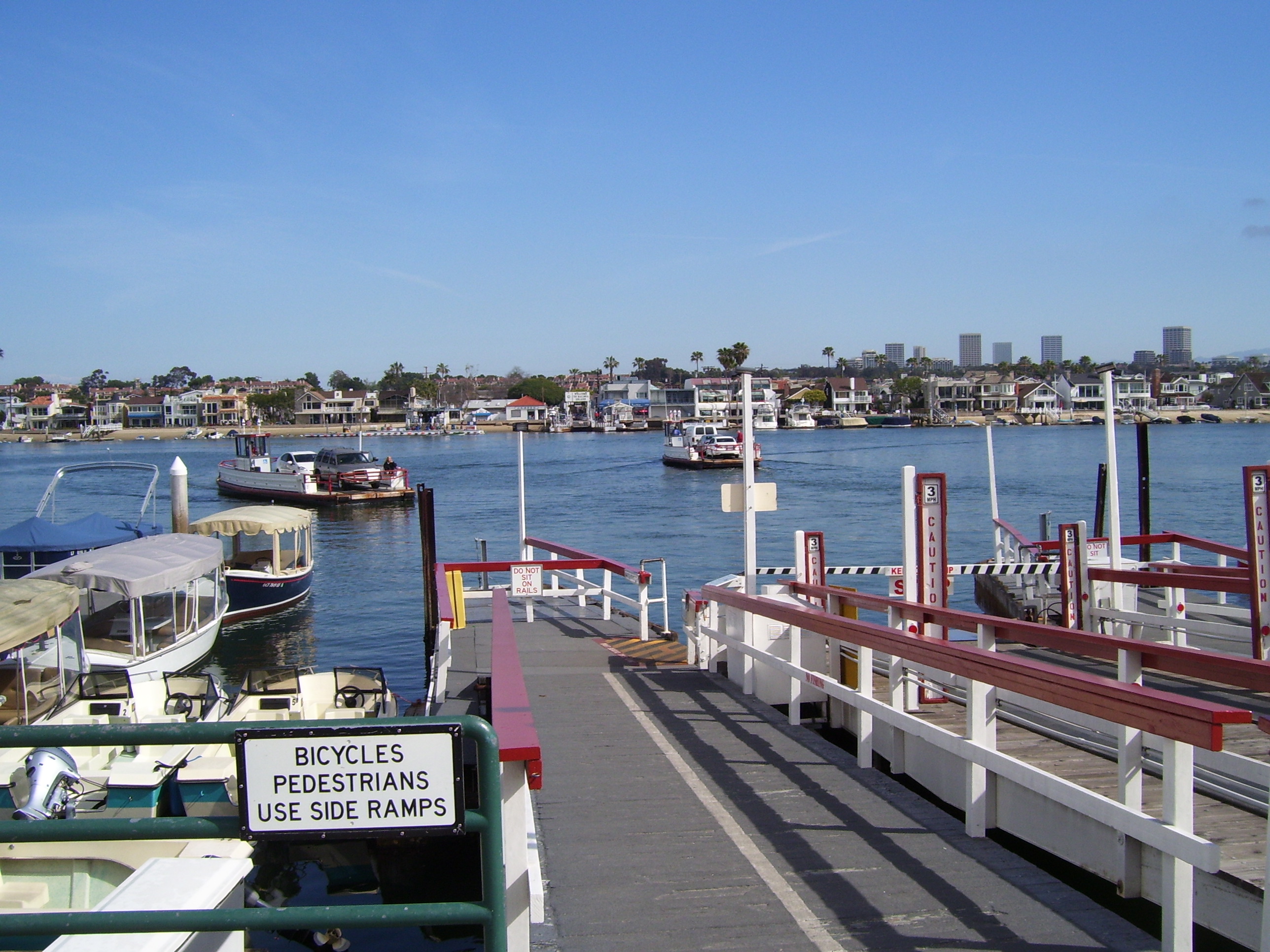 On my way back to the start of the Santa Ana River Trail, I ran into these two, Henry (left) and PJ, who were riding a whole lot faster but were kind enough to talk to me anyway. This is one of the great things about riding along with a huge amount of gear...people notice and ask you where you're going, and before you know it an actual conversation happens! Anyway, they were at first confused by why I left LA and came here first before going east, but after some discussion they agreed it was probably the best choice because the SART is a great path to ride on (and they were right), but also because going this way meant I didn't have to ride through the heart of LA. Anyhow, Henry and PJ posed for this photo and then took a picture of me with the start of the SART right behind me. Thanks and nice to meet you guys! 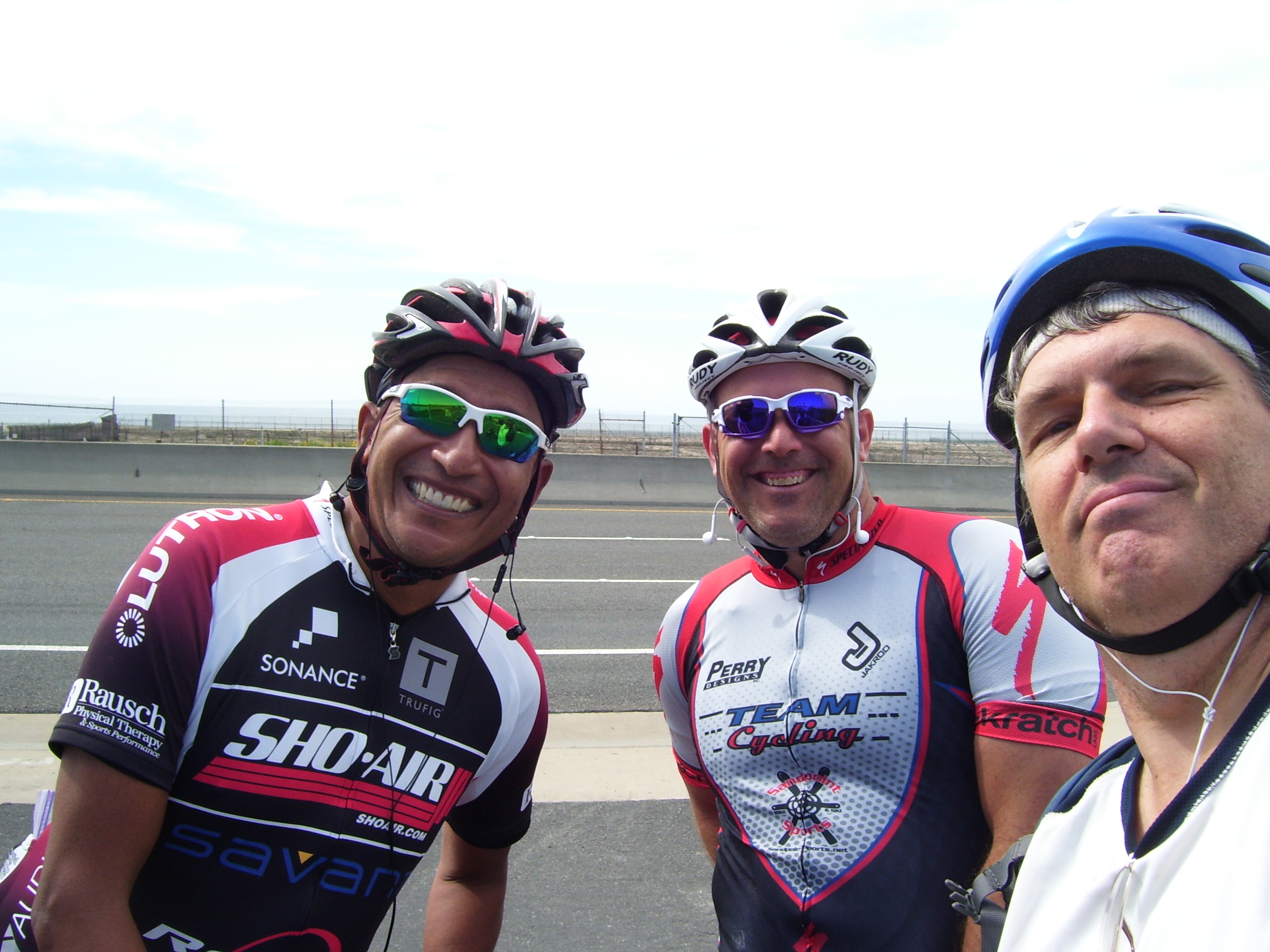 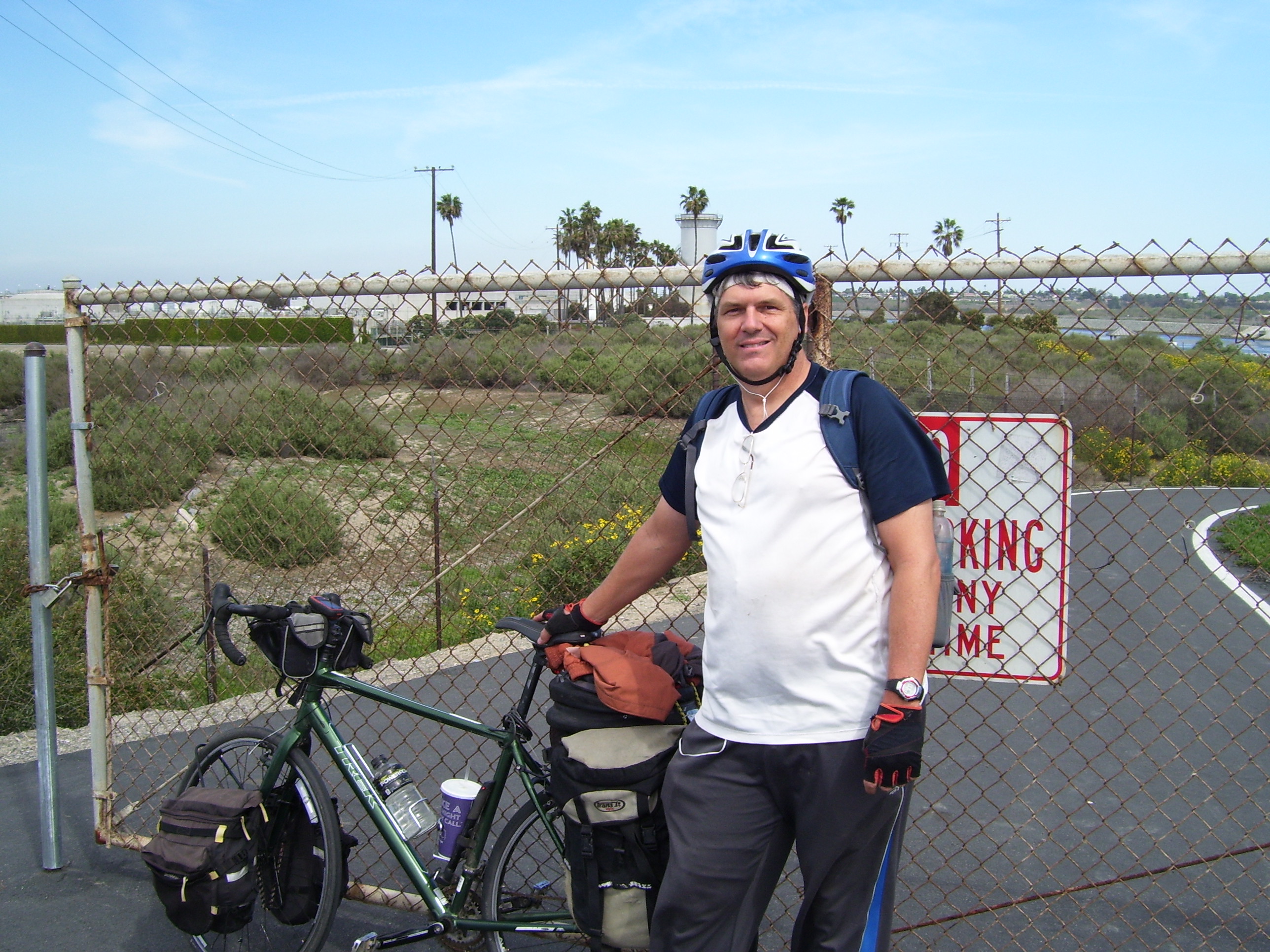 Here are a couple of views of the aforementioned SART. Very nice wide bike path, very smooth, with lots of cyclists early but the further I got from the beach, the fewer I saw. Notice how in this first picture the river is pretty wide, but later on it's just a trickle. 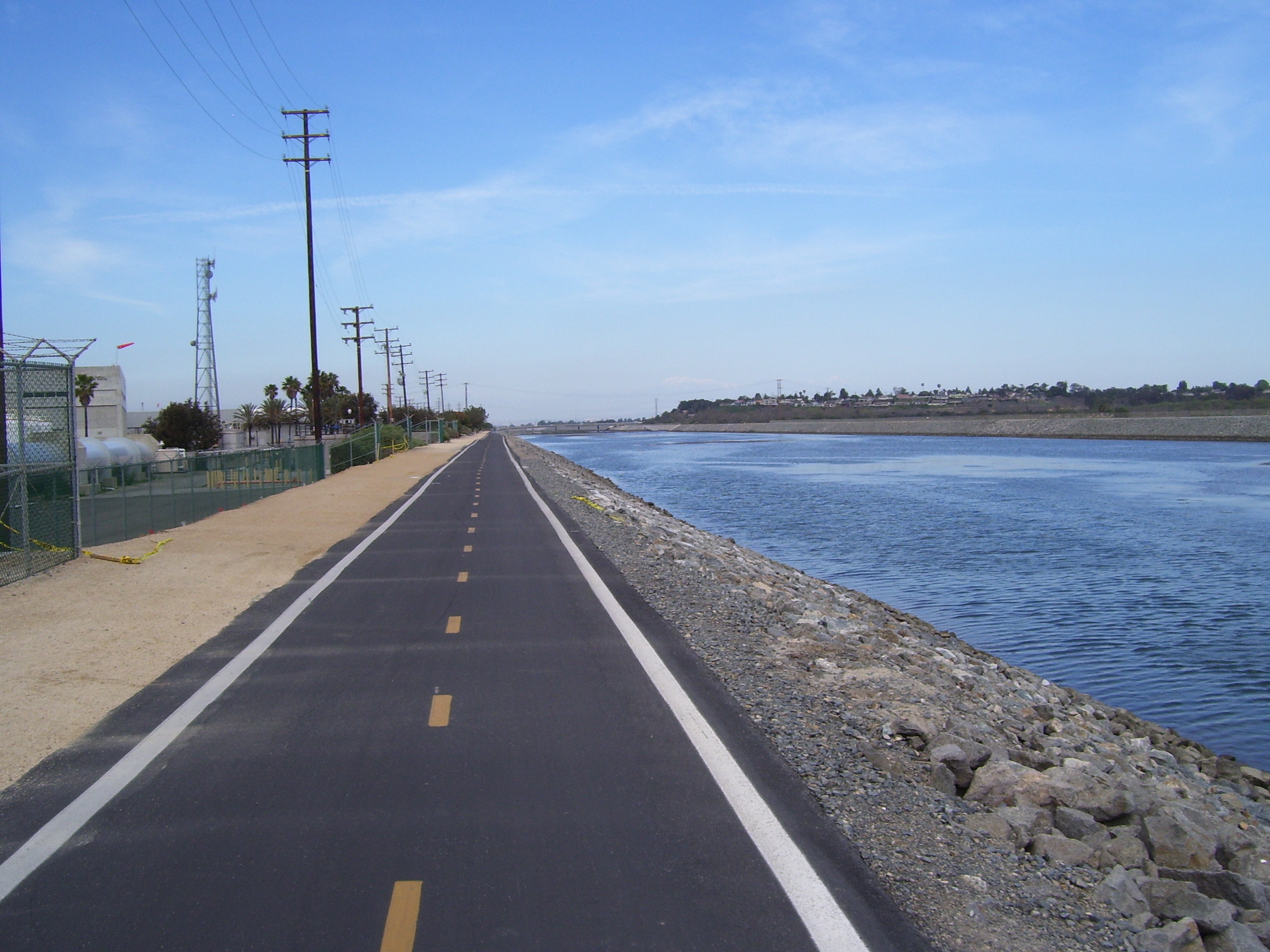 Further on than that, they actually built a golf course down in there. Yes, this is in the middle of that formerly barren looking stretch of waterway surrounded by concrete. The golf course goes on for quite a while since you can only fit a couple of holes at a time in that narrow area. 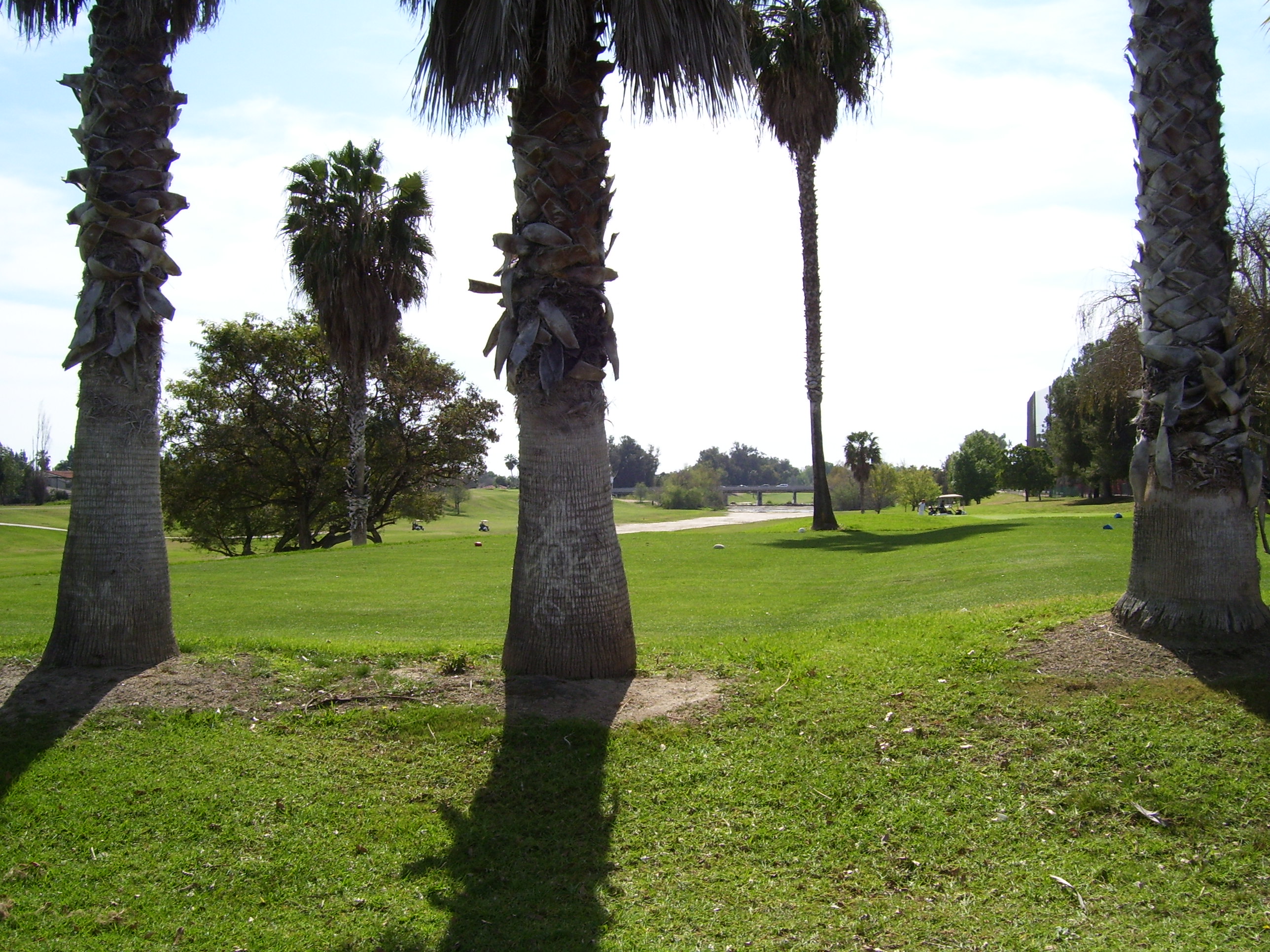 And just as quickly it's back to barren again. 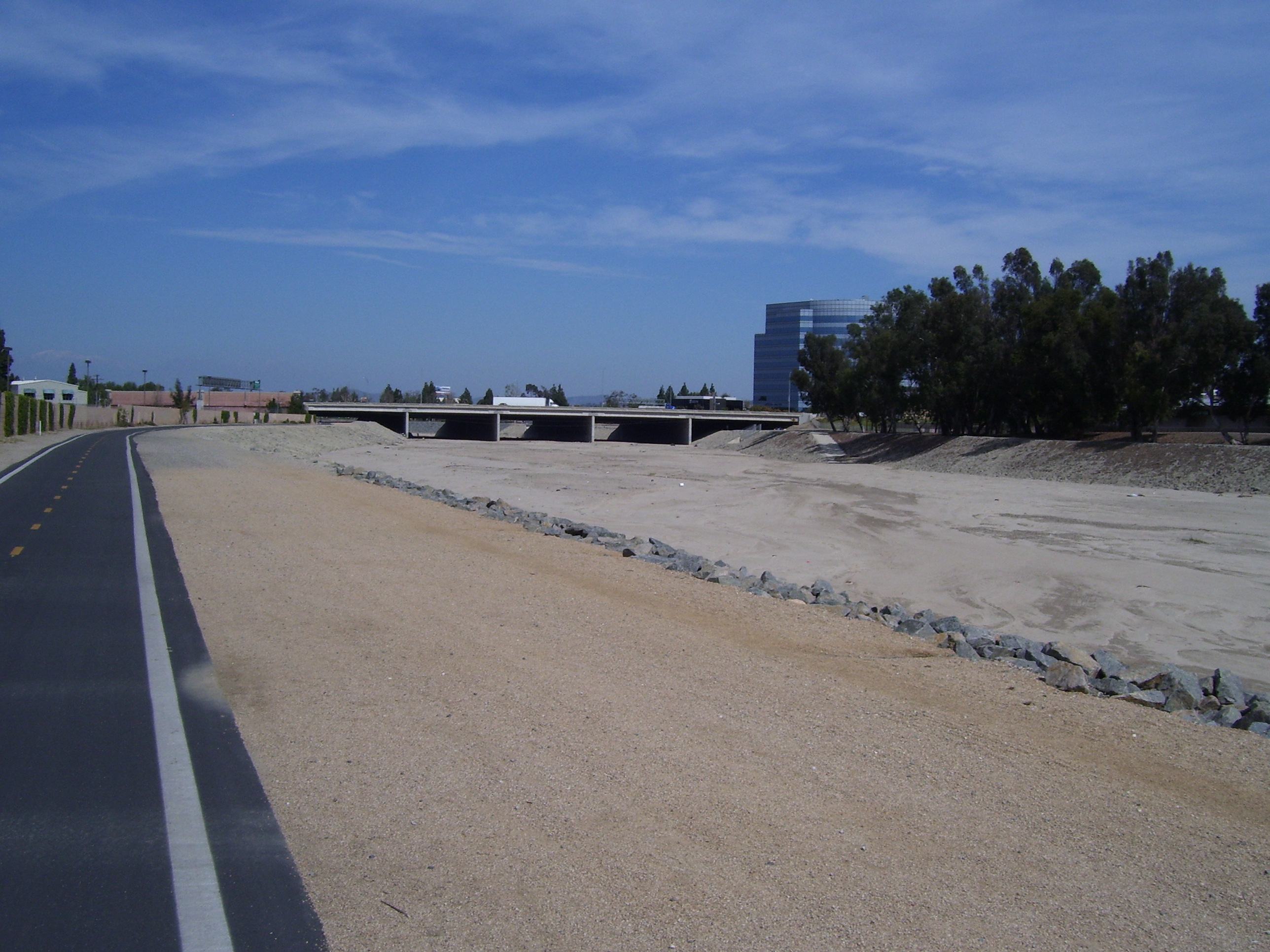 A bit further on I passed right by this sports stadium.

The terrain around the river started getting hillier, and the river filled out again...but my time here was almost over and soon it was back to city streets and all those damn lights. 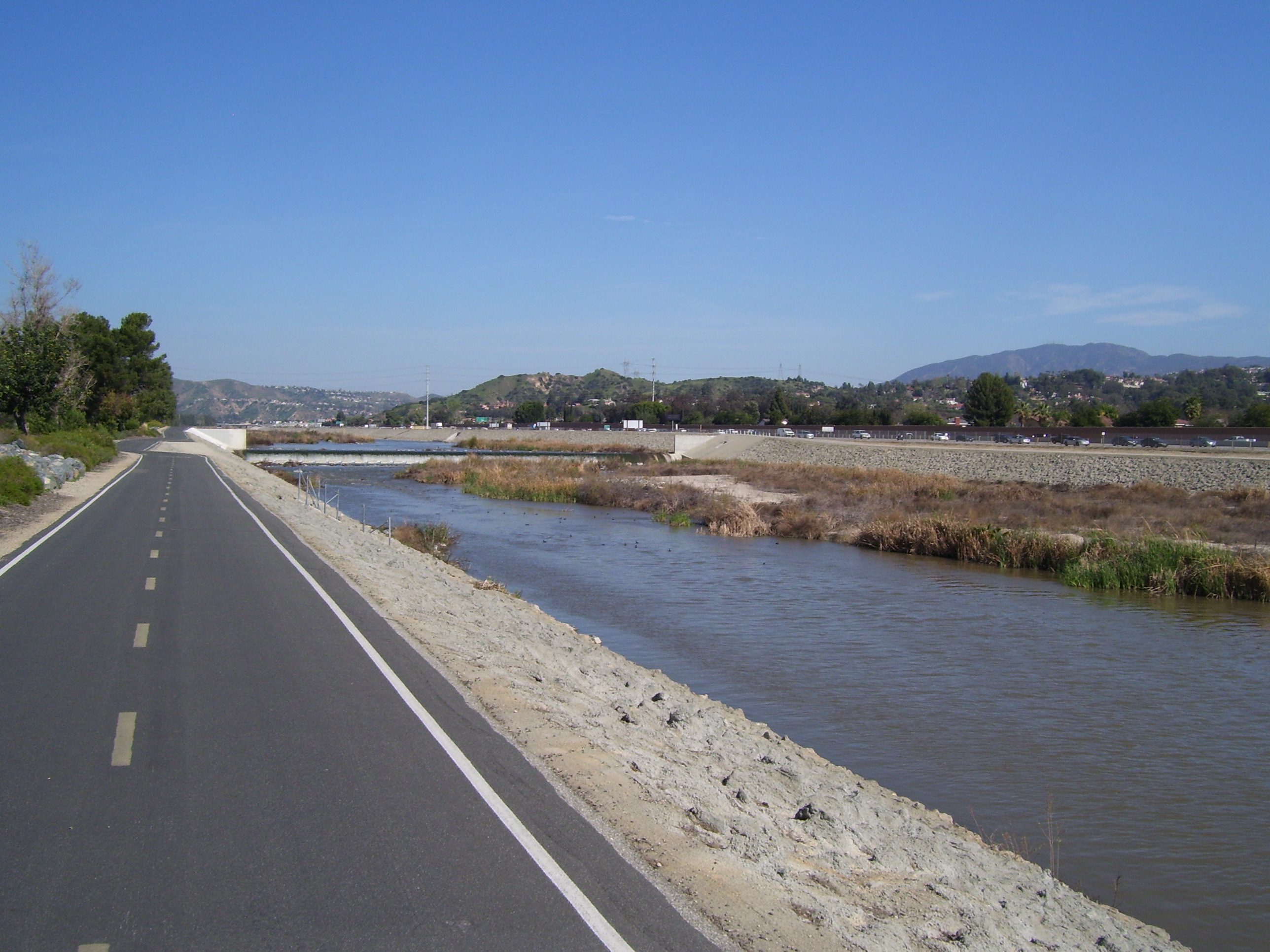 The hills got serious now. Here are a few random photos of views I passed by. Quite beautiful terrain and they managed to build things on some of it, too. A couple of these photos were taken while I was still on the trails, others after I left. 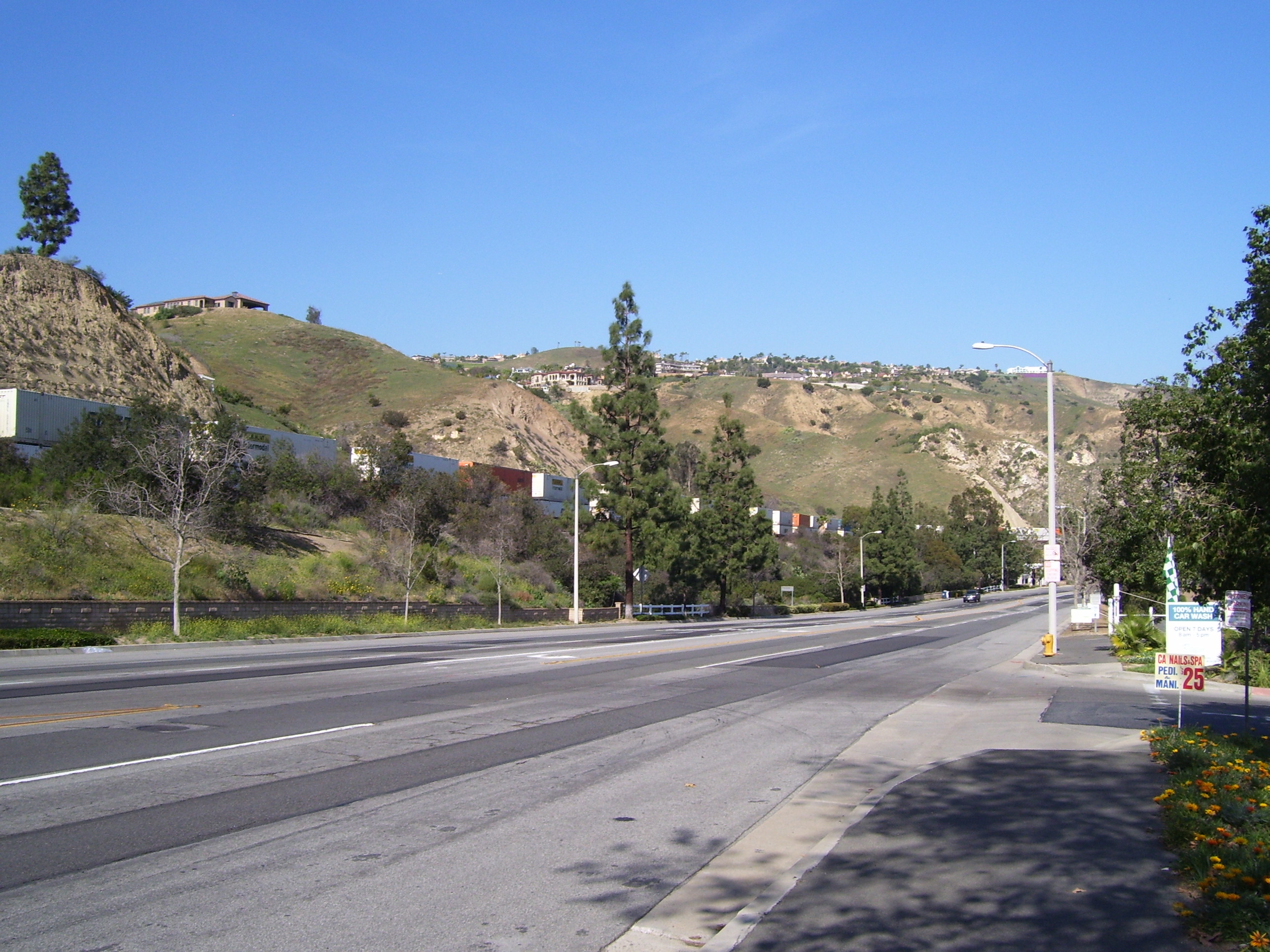 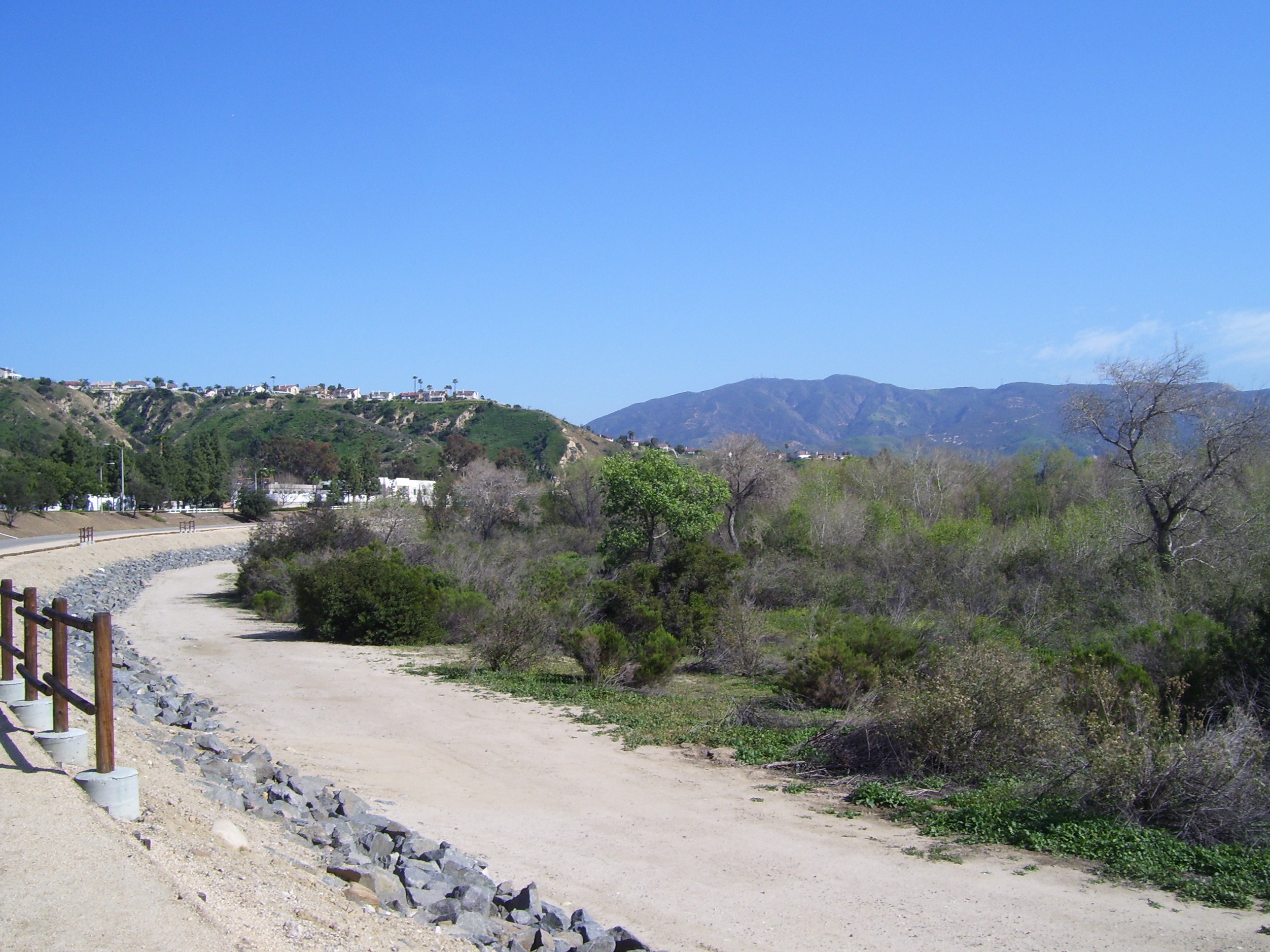 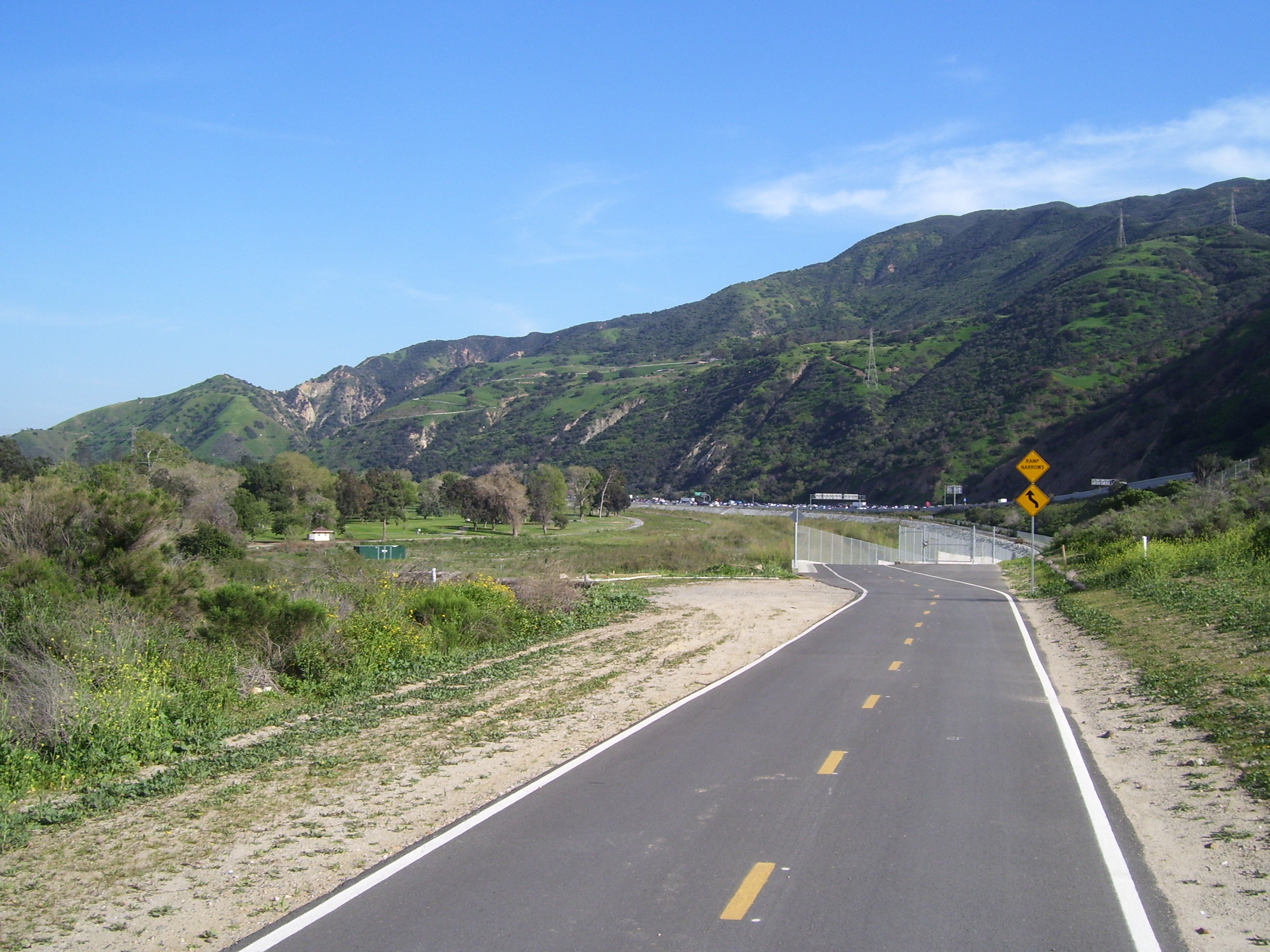 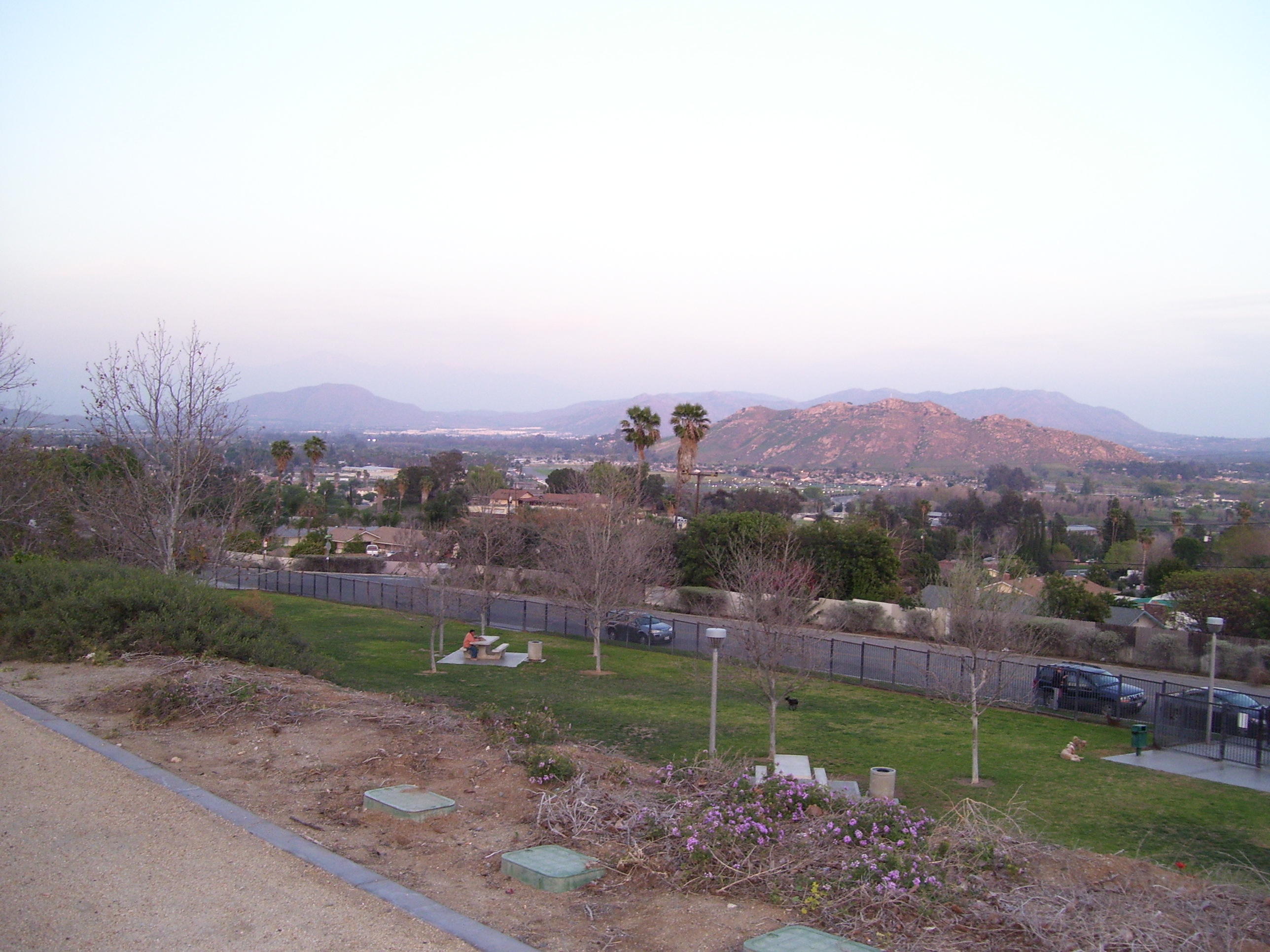 Somewhere in the middle of all that I enjoyed another diversion as the bike path suddenly turned into gravel and then into a dirt track heading straight into these iconic orange bushes. Seems I should've gone a different way as this was surely private property and the supposed trail on the GPS wasn't really there. I went back and found I'd missed a very tiny sign telling me to turn and cross over the river to pick up the real path on that side. Ah well, apparently even with a GPS you can still get lost. 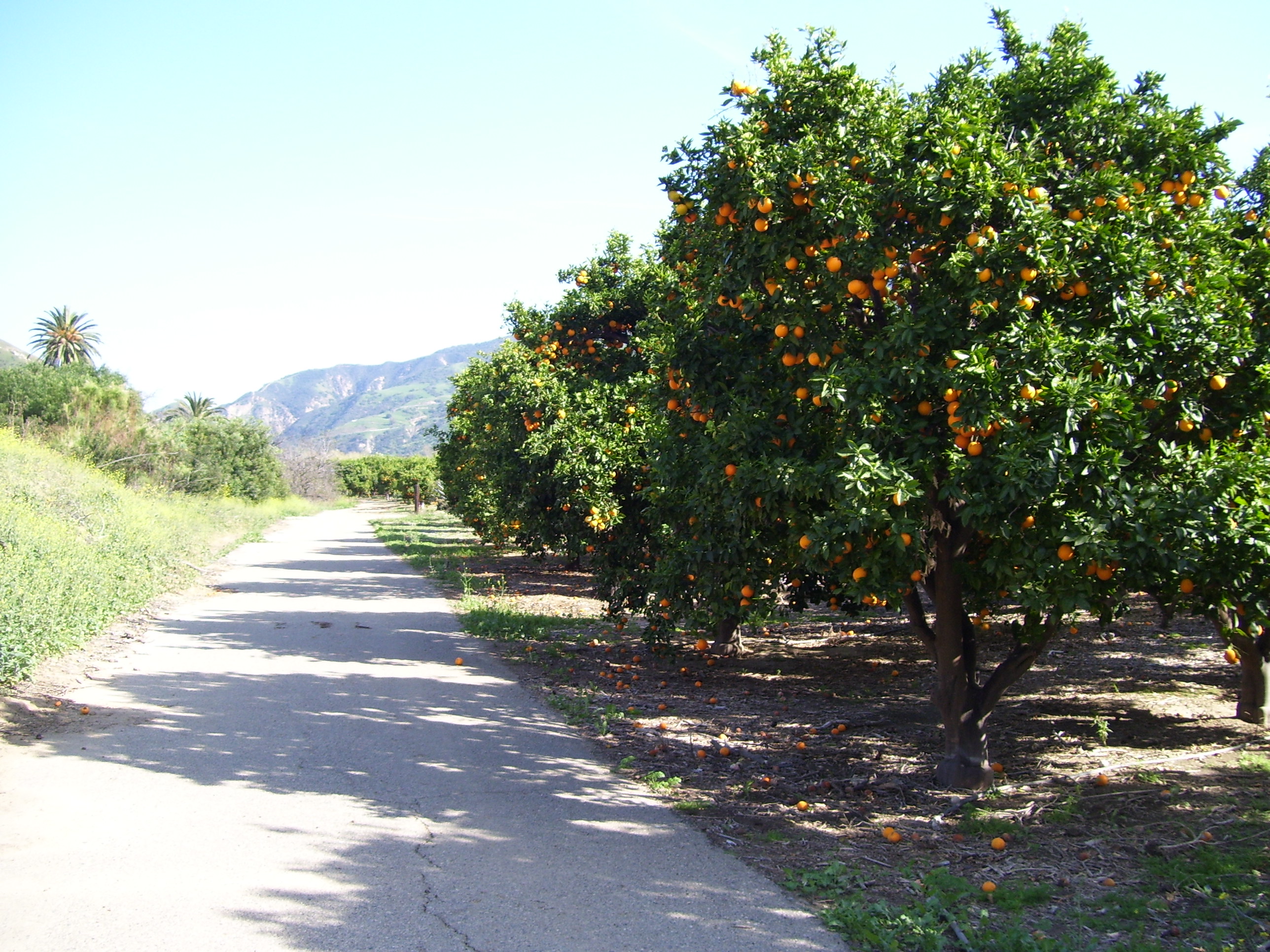 Although I was tempted, I didn't actually take any of the oranges. I did enjoy the view up ahead of that lovely mountain before turning around and heading back the way I came, about 3 miles each way. Side trips...that's how you turn a 75 mile ride into 92 miles. I just hope my legs recover by tomorrow!