Redlands to Indio
Miles: 77
Terrain: Tough climbing for the first 25 miles or so, then 30 miles of descent, followed by level ground
Weather: Chilly and overcast early, sunny and warm later

This is the first tour I've done where I've had the ability to scope out the elevation gains before heading off the next day (other than a vague idea that it might be lots of climbing, or whatever) and that really helps. Today, for example, I knew I had to climb from about 1200 feet to about 2700 during the first part of the day, and then I'd be going downhill to Palm Springs at about 900 feet...a net loss, but I'd have to earn it with some uphill battling. Thus when I got started slogging my way up, I knew for sure I'd only be doing it for a few hours and then the ride would get much easier. That means a lot for morale, especially when you're stopping for your 4th or 5th rest and haven't even gone 15 miles yet. There were several long (1.5-2 mile) climbs that were pretty steep, too, although mostly it was just a constant uphill grade that kept me under 10mph for the entire morning and beyond.

Then I finally topped one last hill and the descending started, all the way into the town of Banning, where it leveled off for a bit but the winds picked up from behind me, so I had little trouble until reaching the end of town at the last I-10 freeway entrance. This is where I ran into a route problem, where the GPS tried to send me onto the highway (despite being in bicycle mode, and the freeway clearly marked as biked prohibited) and Google Maps said I had to go cut through a reservation that had restricted access. While I scratched my head over that one and contemplated trying a little dirt path that followed the freeway on the other side of the fence, another cyclist passed by heading straight for the freeway, and I managed to yell "Can you get through that way?" just before he got out of hearing range. He stopped and filled me in on the super secret entrance onto a barely-used frontage road up ahead, only reachable by taking the highway onramp almost to the actual freeway but cutting off at just the last moment. In fact, he explained this was the ONLY way through here going east on a bike. Turns out he was going to Palm Springs (which is on my way to Indio) so we rode together for the next 30 miles of breakneck descents.

The little frontage road was full of cracks and ruts and rocks, but with the downhill and tailwind (getting stronger by the minute) pushing me along, I got moving too fast and one of my front panniers came loose, tangling its strings and the bungee cord I used to hold it on, all somehow wrapped around the hub so it looked like the Gordian knot. Even after cutting the support strands loose, it still refused to budge until we forced the wheel off and got it untangled that way. Extra bonus, one of my spokes got bent, but I just adjusted the brakes and rode with it like that until I could dig out my spoke wrench later on. (Edit: Never did find that tool, and had to fix it with a crescent wrench.) Actually, it's amazing the cords didn't do more damage...those bungee hooks could very easily have ripped out half my spokes and left my trip basically ruined.

So with that in mind I rode more carefully until we got to smoother roads, then let loose and got the bike up to over 30mph a few times, which is uncomfortably fast on something as overloaded as mine, but it was worth it for brief periods. I enjoyed the chance to have some company, too, and he warned me about some places with tricky crosswinds which really set the bike to rocking. Once past those we cruised into Palm Springs and took a break while I figured out the next stage of my route, and then it was off again. A few hours later, well after dark, I reached my destination, found a hotel (cheaper than any of the online rates, too) and had some pizza.

Now for some photos from the day's travels. Most of them are just random shots of terrain I was passing by, but there are a few others worth commenting on. Most of the time I was in urban type areas today but even so, there was a lot of beauty to be seen past all the wires and lights and poles everywhere. 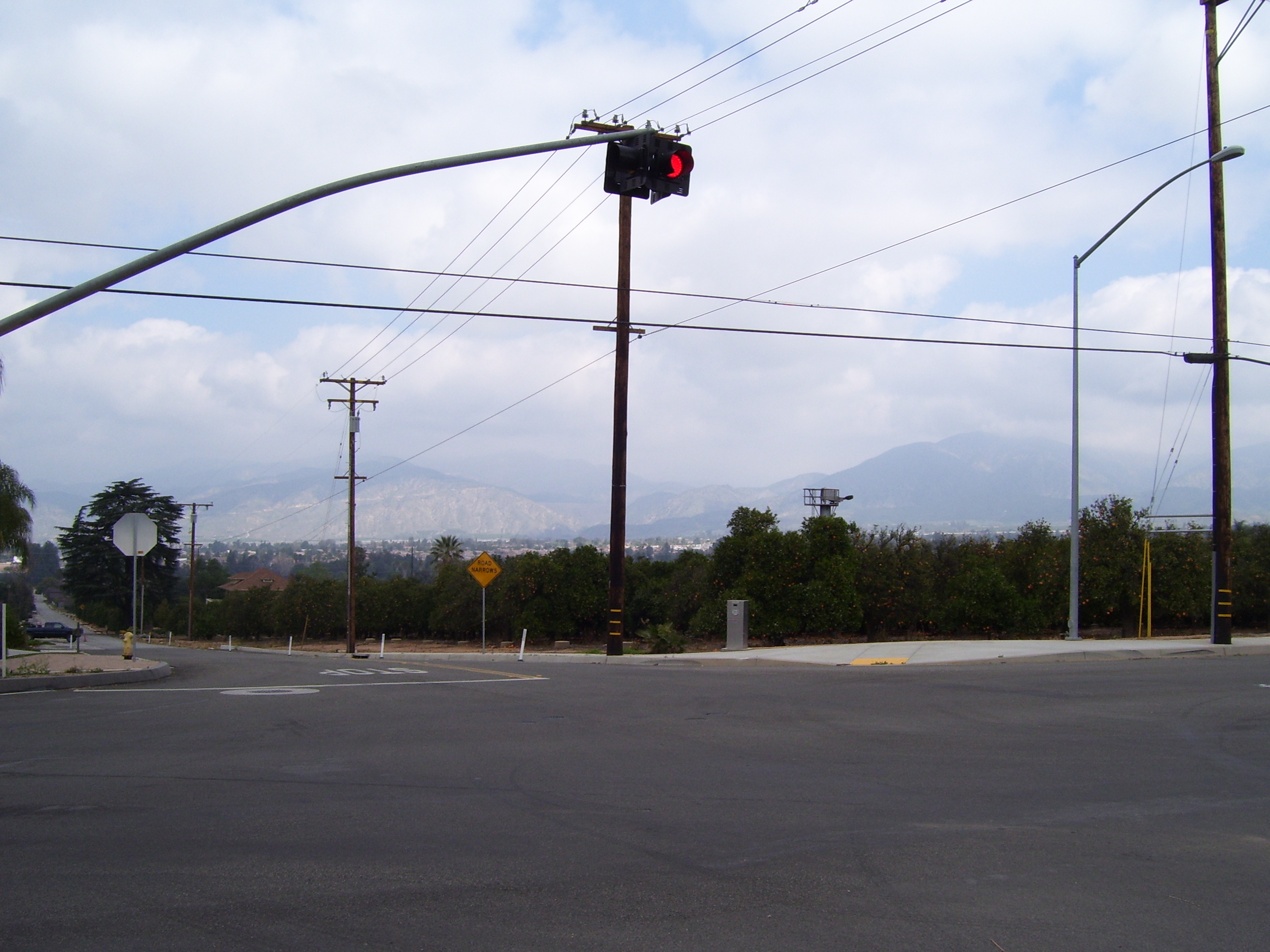 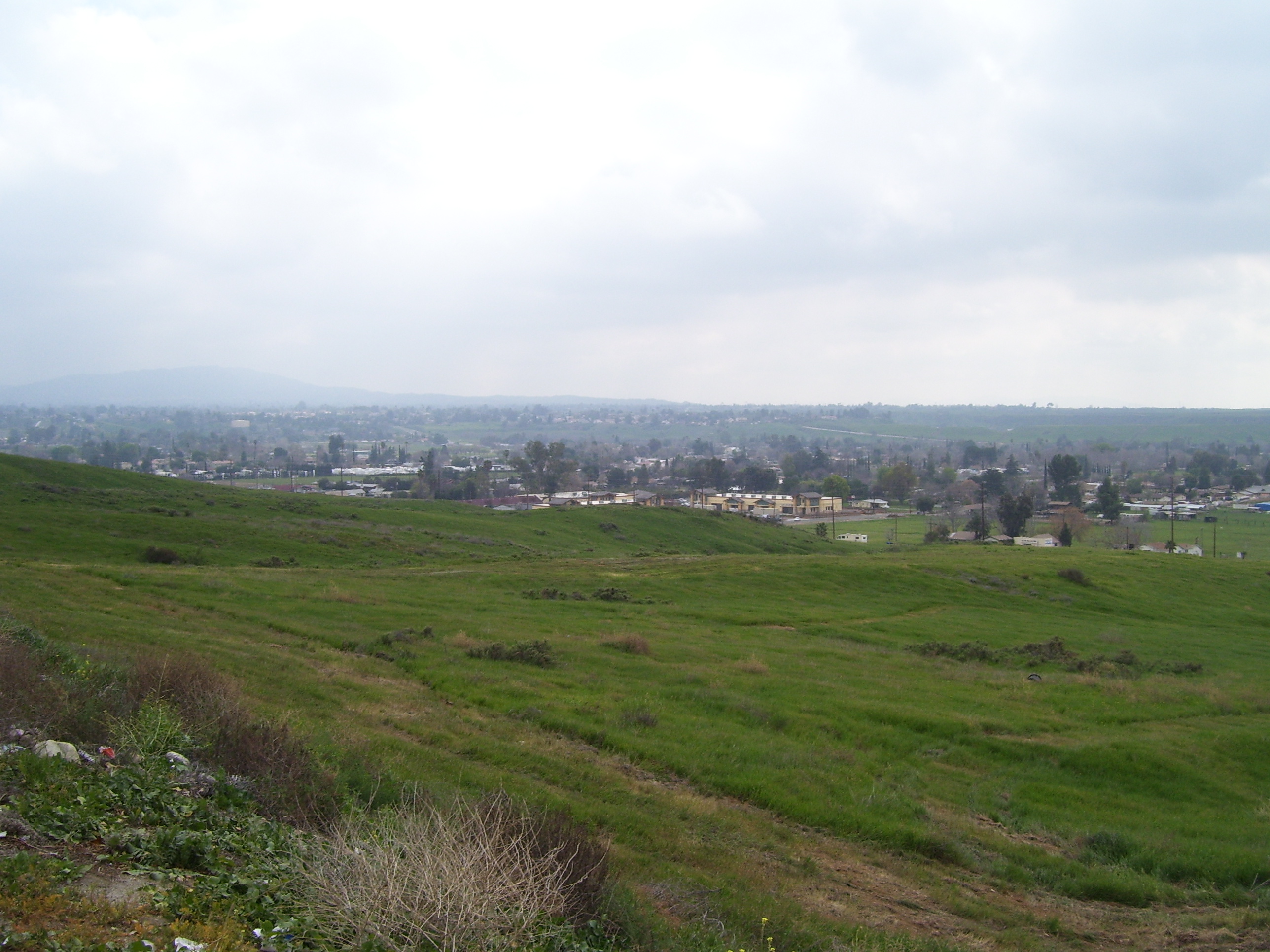 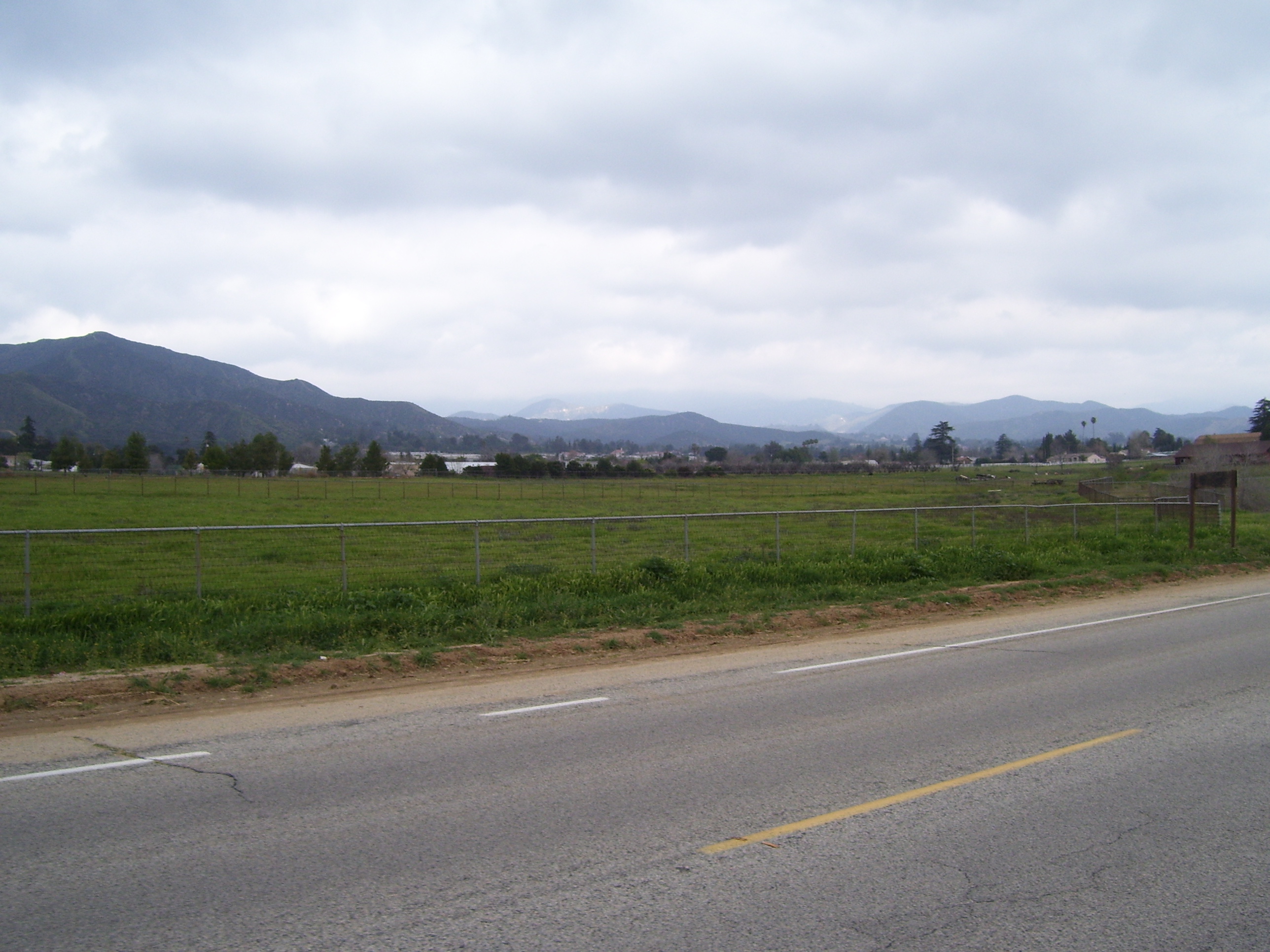 For the second day in row I met a fellow cyclist, this time Greg Barker from right here in Banning. He was on his way to Palm Springs and we rode along together for a while. Great guy and I'm glad he was there to show me the secret hidden passage through the fence onto the side road, even if that road did try very hard to destroy my front left pannier. 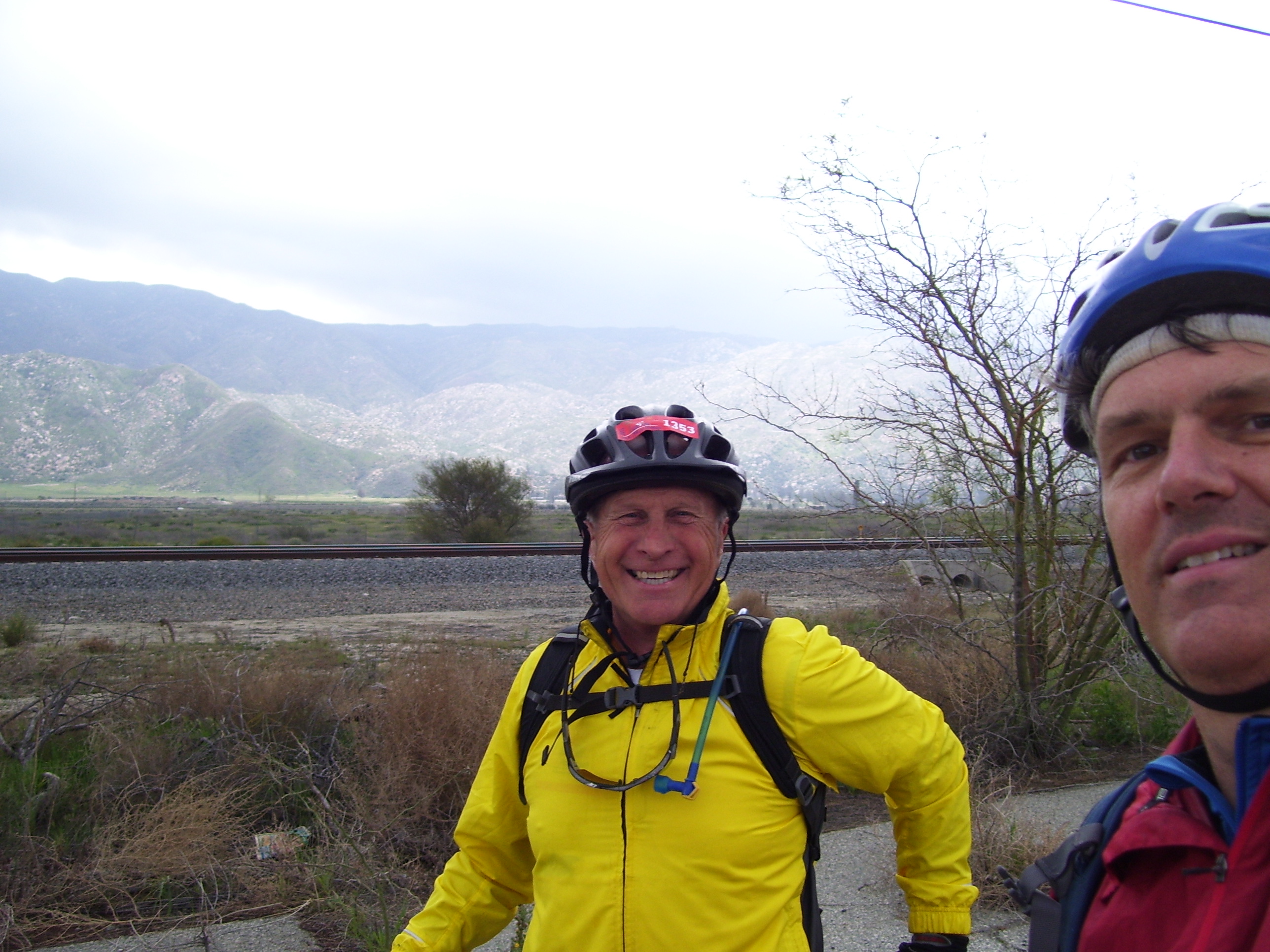 This is some of the scenery we rode by...amazing mountains, plus some windmills, and much of it along this terrible road you can get a glimpse of at the bottom of a couple of these photos. It used to be one of the main roads through here, apparently, but when they put in the highway in the 60s it fell into disrepair and now is only used by the occasional railroad service truck. 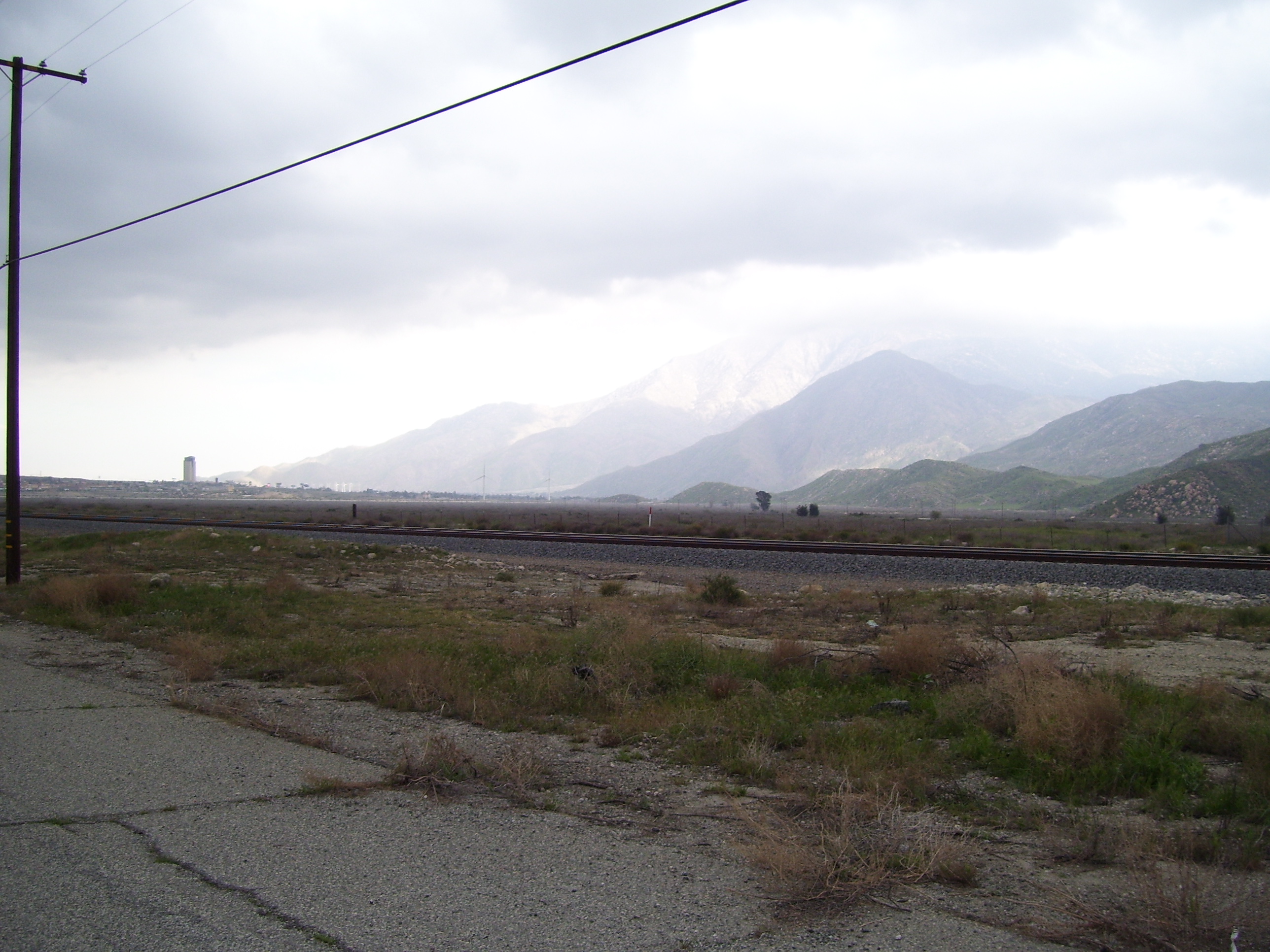 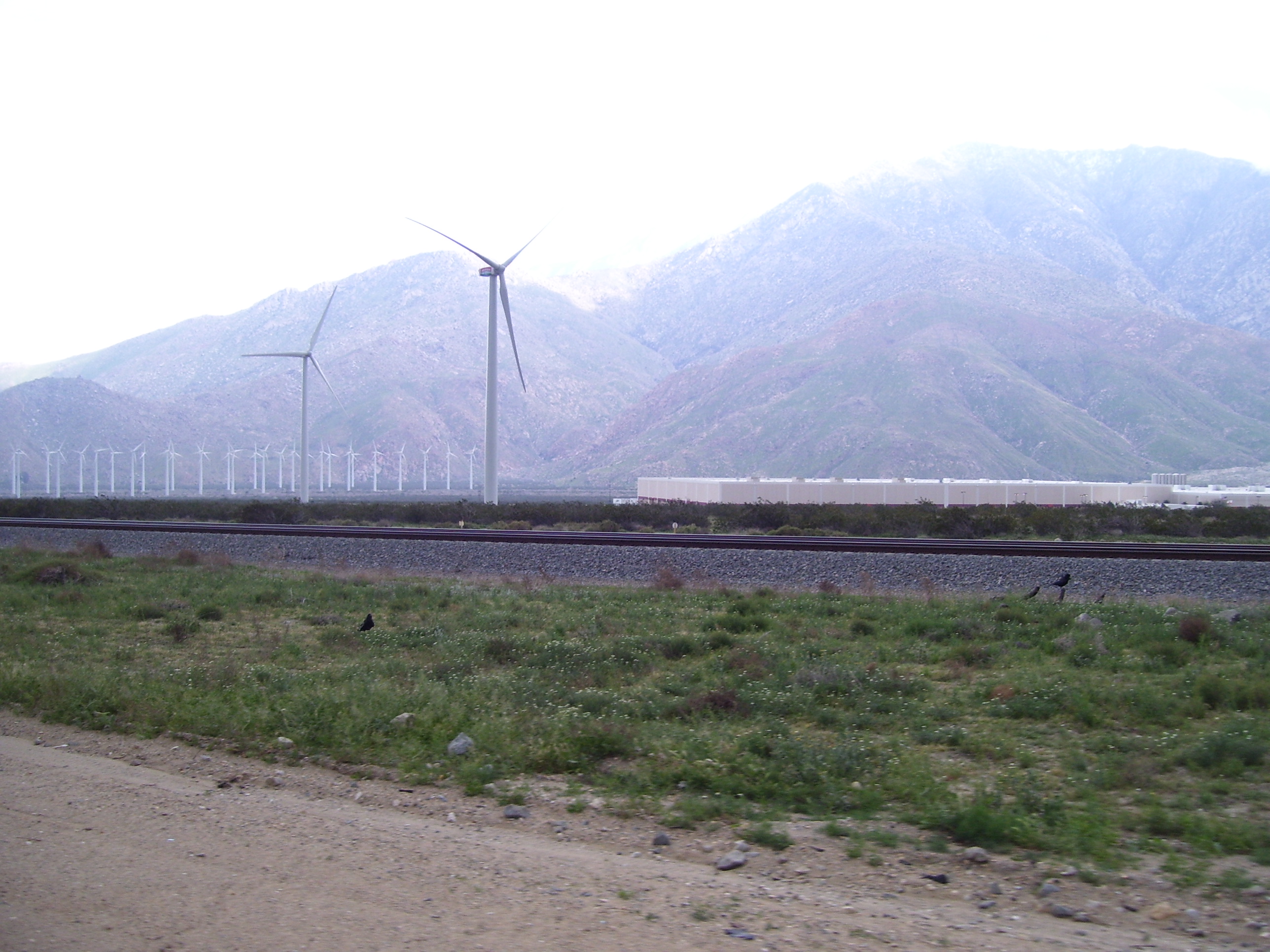 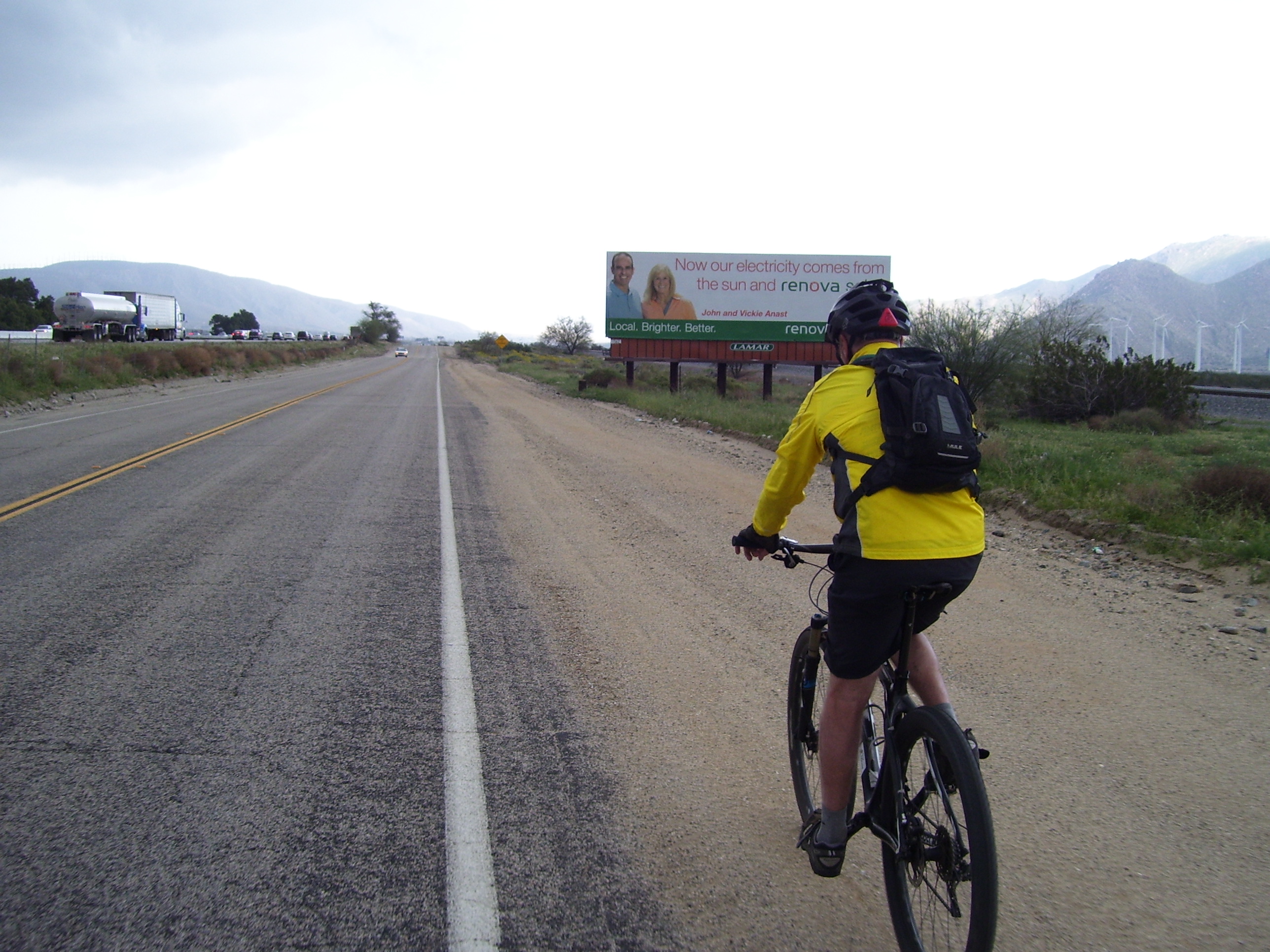 Sure is nice to have someone to talk to for a bit, especially after the MP3 player runs out of juice for the day. In any case, we rode to Palm Springs where I said farewell and moved on, turning back to take this next photo on my way out of town. I even managed to get some lens flares in...JJ Abrams would be so proud. 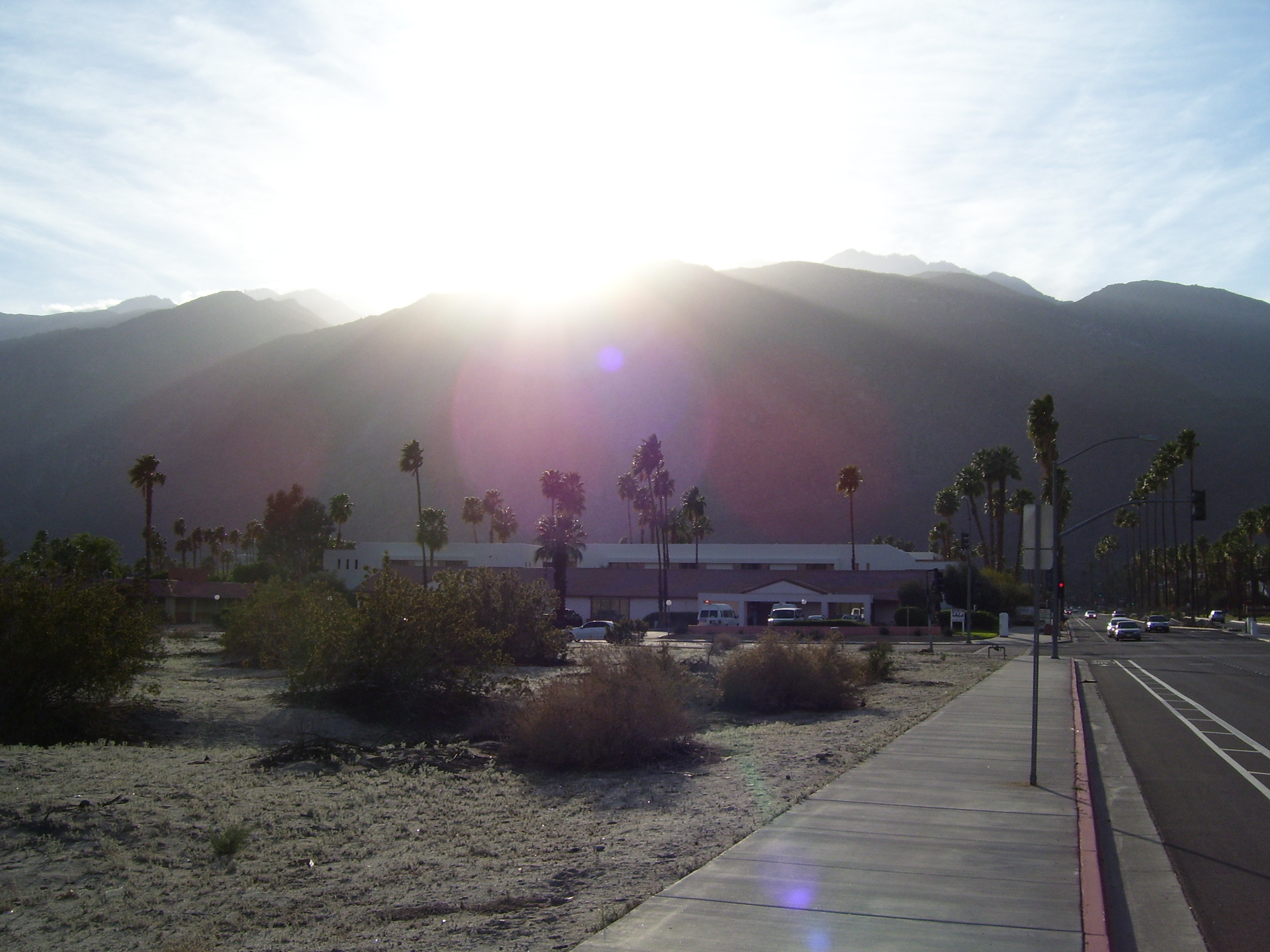 After that there was nothing but desert for a while... 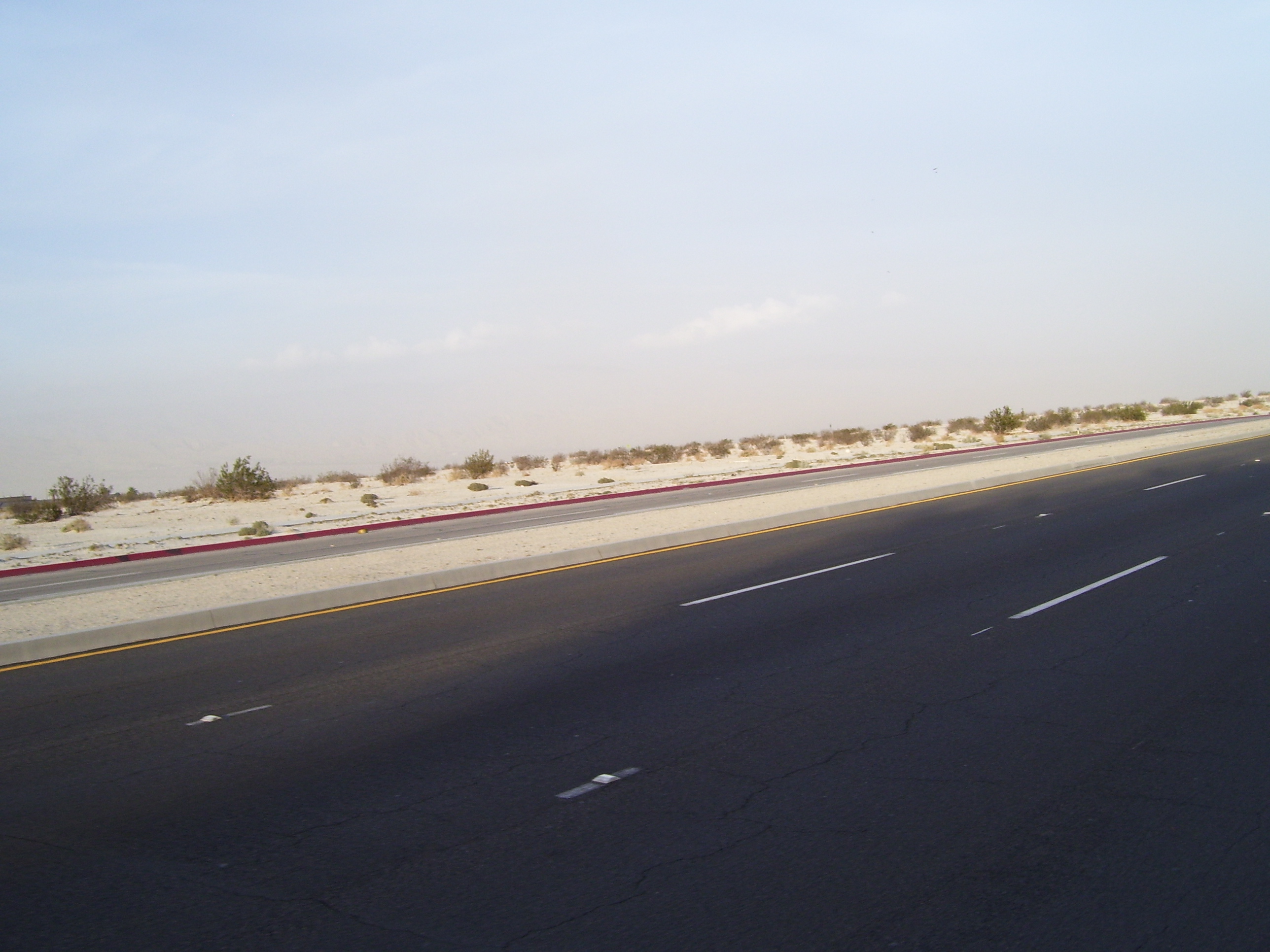 Another view of the sunset once I got much further out...I tried outracing it, but couldn't quite go fast enough. 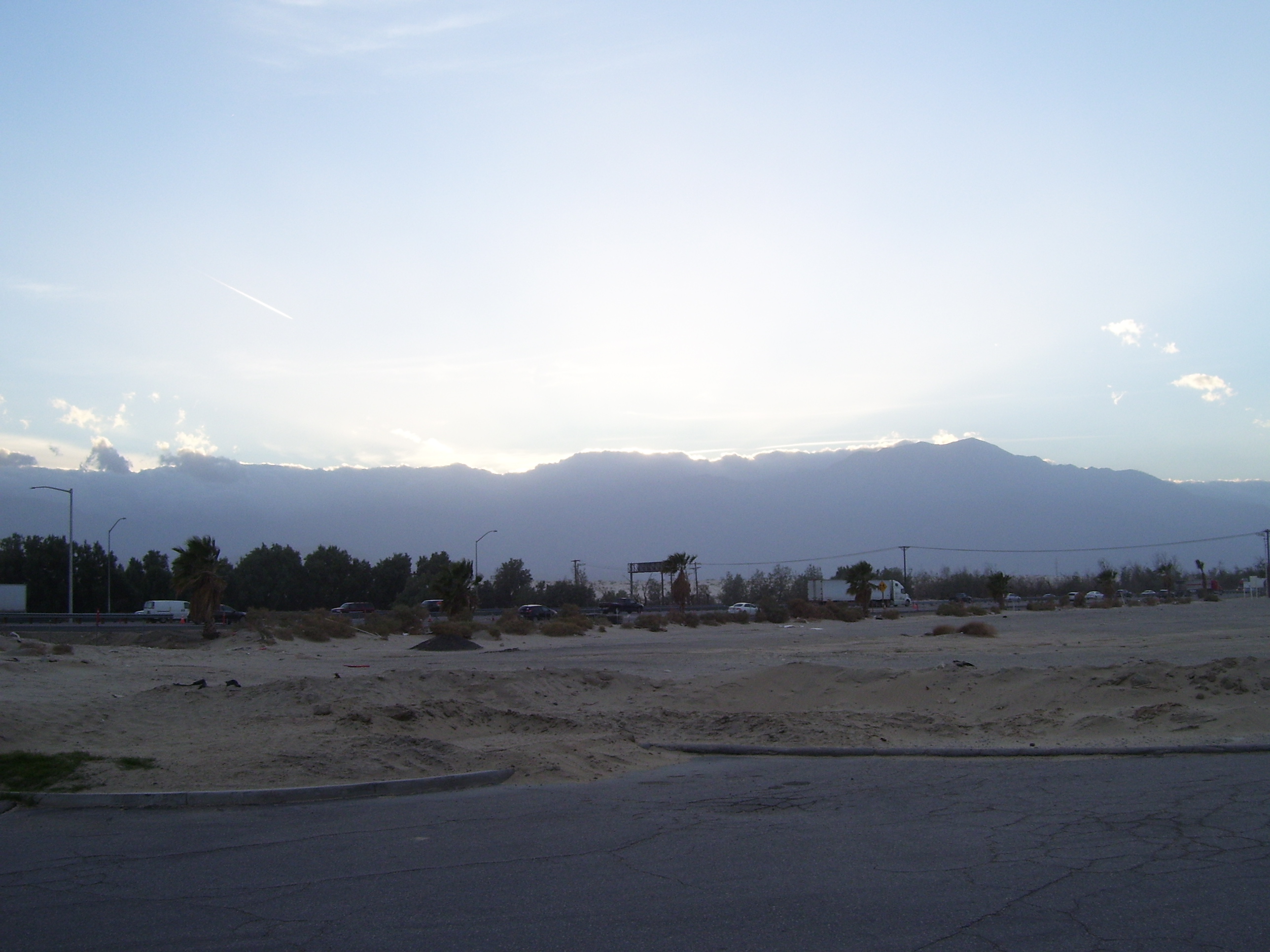 And here's a view of the last light of day on the mountains in the distance. Plus lots and lots of sand. I guess I should get used to that as I'll be seeing quite a bit more of it for a while. 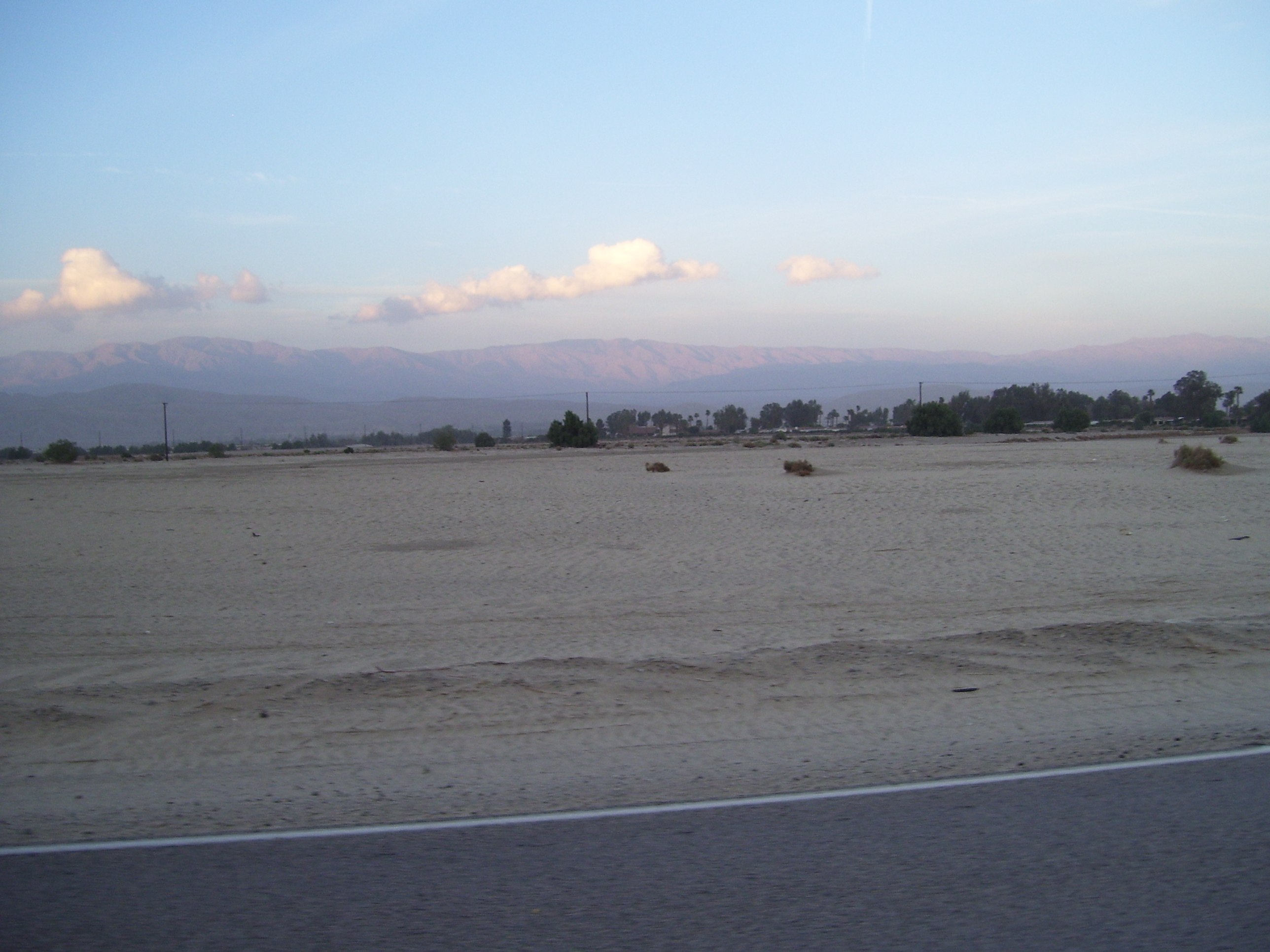 Tomorrow promises to be interesting as the nearest hotel is over 100 miles away and I'll have to ride on I-10 most of the day to get there. Plus the day begins with climbing similar to today's start. If I have a tailwind, though, it shouldn't be as bad. I hope.