You might notice the disparity in the mileage mentioned above compared to the amount on the map, which says 78 miles. There's a good reason for that and I'll get to it soon enough.

The day started out rainy again, and I really didn't want to get out of bed since it was pretty cold as well, but around 9am the rain basically stopped so I got myself moving. The mobile home's one disadvantage was a lack of heat, since apparently it was out of propane, according to the owner when I mentioned it the next day. Still a good deal, though. I had some work to do on the bike seeing as one of the brakes was out of alignment again, so I got that fixed quickly and headed out right around 10. After picking off a couple of easy geocaches on the way out of town, I soon hit the highway onramp and the climbing started.

This was another long one, right around 10 miles but only about 1200 feet of gain, so the slope wasn't too bad. I didn't have to use the lowest gear this time. Still, it was slow going, with breaks at every mile marker, so I didn't hit the top until around noon. Then it was a bit of smooth sailing and I found lunch at the next exit, right around the 24 mile point, and everything was looking good. Then I got another flat, on the rear tire again, and this one left me with only 2 spare tubes. At this point I'm getting a little worried that I might run out of them and wind up stranded, but I had to hope that wouldn't happen before I could make it to the next bike shop on the outskirts of Phoenix.

Pressing on, I reached a rest area, where a nice lady boosted my spirits by admiring my efforts in trying to cross the country (she had just passed me and wondered if that's what I was doing). After that I rode about 12 miles without stopping, but the crosswinds were kind of annoying so I couldn't really cruise along much...it was mostly just constant pedaling without much in the way of rest. Another break at the 50 mile point and it was still just after 5, so I knew I'd be getting to my hotel after dark but not too late, I hoped.

Then, of course, disaster struck. I got another flat, this time in the front wheel, right at an exit, so I was able to pull off and move away from traffic for a change. Unfortunately, when I went to put some air in it to try to identify the location of the puncture (so I could remove the road debris that caused it), my air pump broke. I tried any of several ways to fix it including the tried and true duct tape method, but nothing worked...the seal had broken and stripped the threads, so nothing would hold it in place enough to stand up to the rigors of pumping air into the tube.

That was it, my day was basically done and there I was 25 miles from the nearest town, with no solution available except to try to catch a ride from someone going past. You might recall that a similar thing happened to me back on the west coast ride, and with very satisfactory results, so I tried it again. Of course while I was walking the bike down the ramp to get into position, it started raining, and I realized a thunderstorm had snuck up on me...fortunately with a handy overpass close by. I headed on down there and stood under some cover for a while, until the winds got so strong they blew the rain right into my face, at which point I took cover against the wall. Once the rain passed, I got out onto the shoulder, flipped the bike upside-down to signify it was broken, and tried some "hitching." An hour later the sun set, so I took out my flashlight and set it to blinking mode, and held it in the other hand so drivers could see me from farther away. That seemed to do the trick as no more than 10 minutes later someone stopped to help. John and Morgan, on their way to Phoenix in a pickup truck, pulled over and showed some kindness to a stranger...much appreciated! They drove me on to the hotel (where I had a non-refundable reservation) and left me there, no taking any money or anything for helping...it's nice to know there are still people like that in this world!

When I went to check in at the hotel I was told it's a good thing I reserved a room as they sold out shortly after I called this morning, and had already turned away several other people hoping to find lodging. And this is the only hotel for the next 30 miles, too. While explaining my predicament, a couple of locals asked to have a look at the broken tire pump, and one of them figured out the problem and got some super-strong sealant glue (he was one of the maintenance guys at the hotel, that's why he had that stuff handy). I'm hopeful that tomorrow morning I can use the pump again, but if not, that leaves me basically stranded because the only businesses here, other than the hotel, are a couple of truck stops, and I doubt they will have a bicycle pump. I might be able to use one of their car air stations, maybe...depending on whether the adapter I have will allow that to work with a Presta valve. But even if I do, I'll have no way to put air in the tire if I get another flat between here and the next bike shop. If I get a flat five miles down the road, that's a long walk...or another session standing by the side of the road with my thumb out, hoping for help. I guess we'll see tomorrow.

As for photos, not too many today. Most of what I rode through was very much like yesterday, and just the same sort of thing: desert, with mountains on either side, and lots of freeway with cars and trucks whizzing by. Sort of like this: 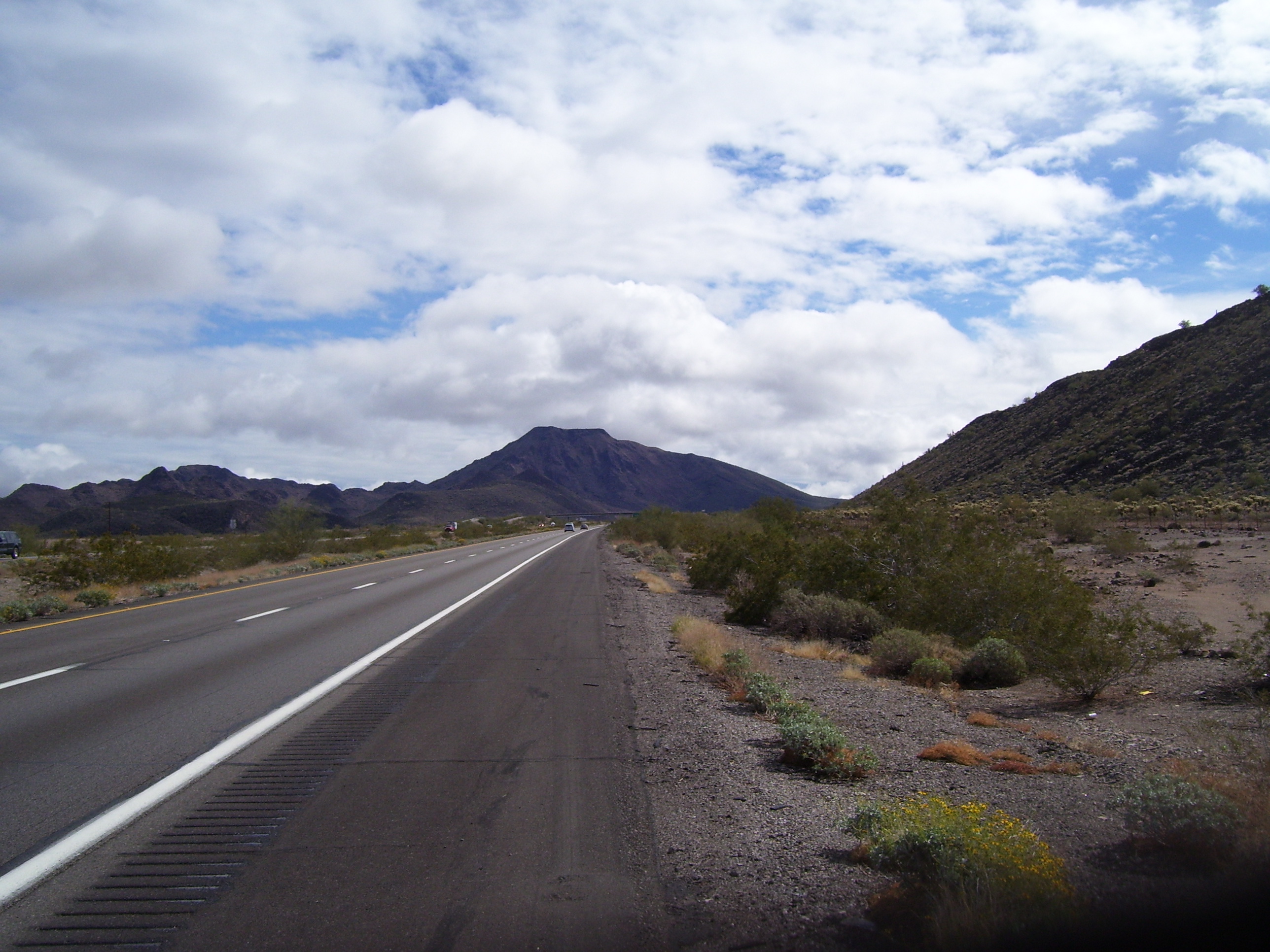 Here's another view with an extra bonus, one of the stupider signs I've ever seen...use shoulder only? Like you really needed to tell me that? Although I must admit, the shoulders got pretty bad in a couple of areas and I was really tempted to go over there and ride on the edge for a bit. Amazingly, I never got any flats as a result of the more broken sections of pavement. They always seem to happen in smooth, pleasant areas. 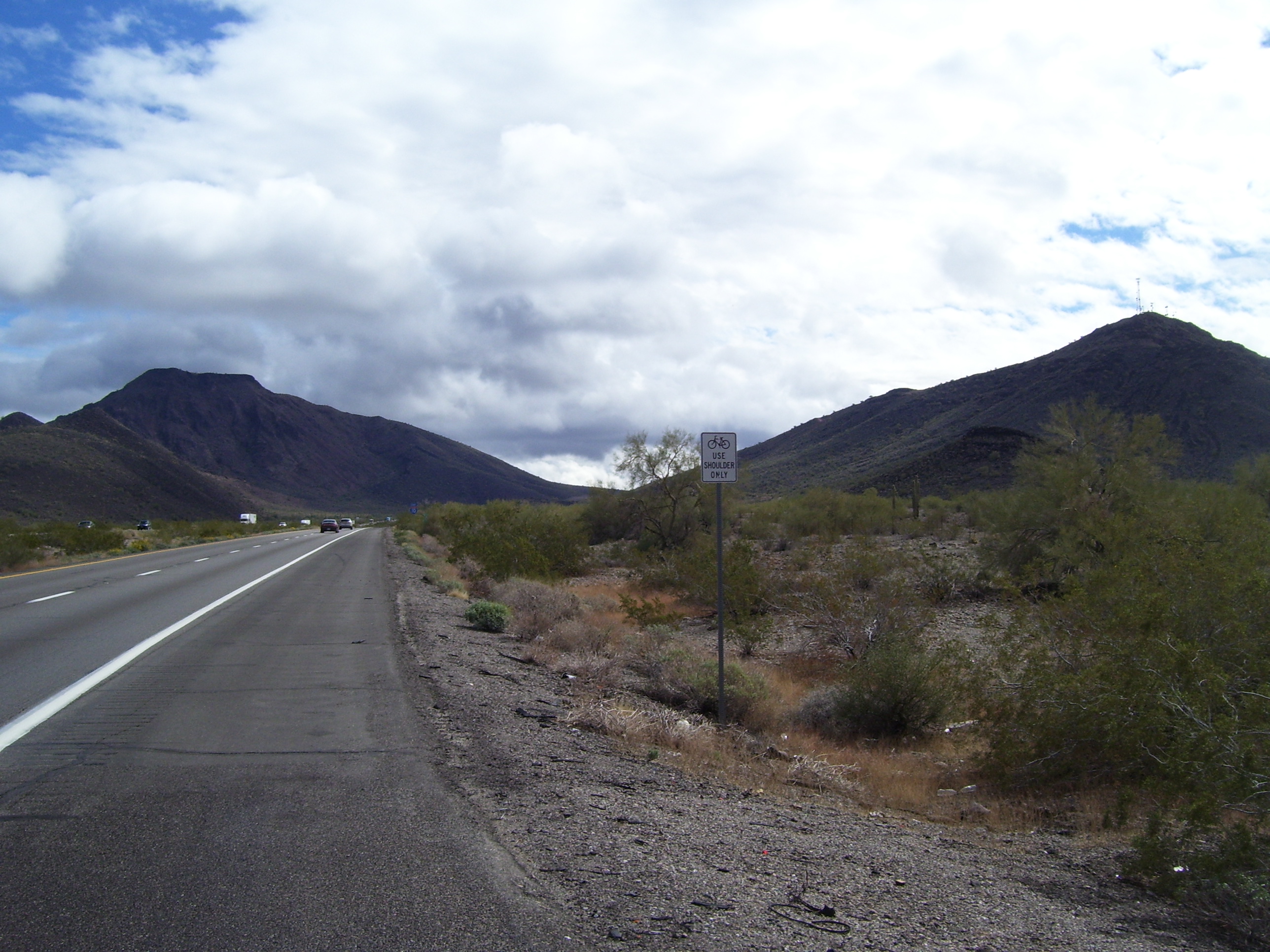 This is one of those classic Arizona images, with a mesa and desert and lots of tall cacti. This is what I got to look at most of the day, when my eyes weren't glued to the pavement so I could dodge the next rock or piece of debris that came along. 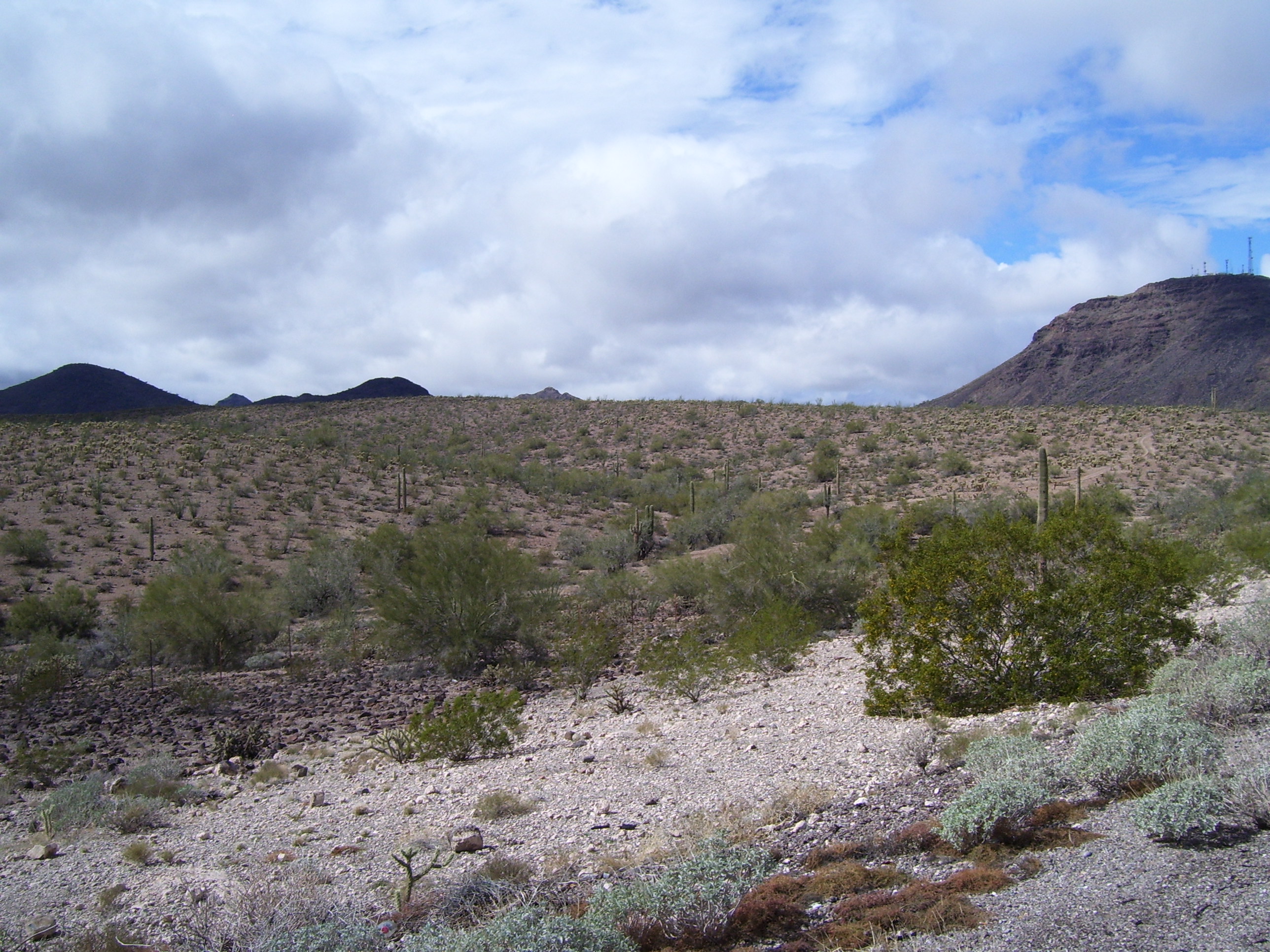 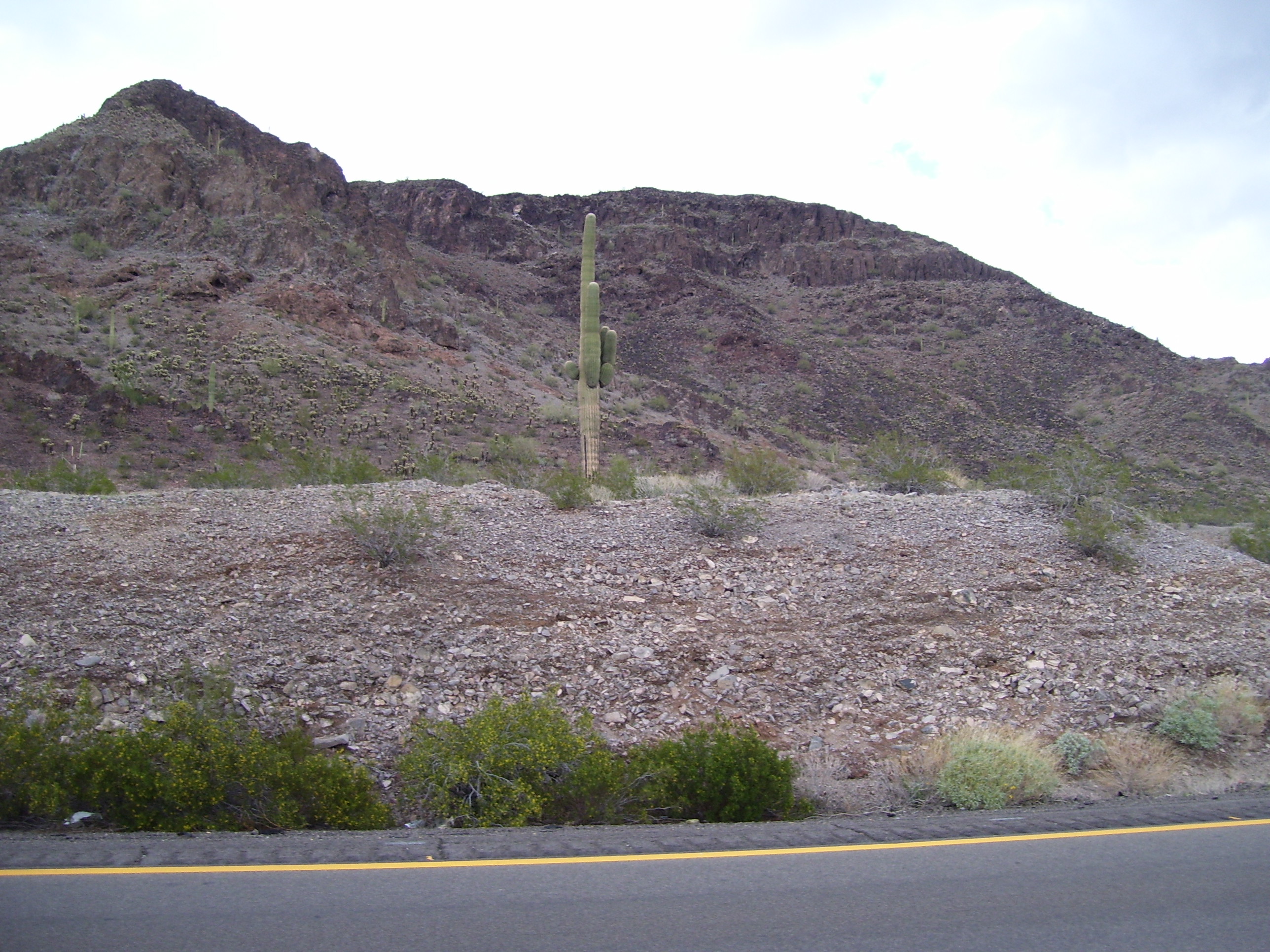 This is a view from the top of one of the overpasses where I took a break. I just had to come up here and enjoy this view (and also get the cache on the other side of the road...one of only five I found today). This picture shows the view looking back the way I came, actually. 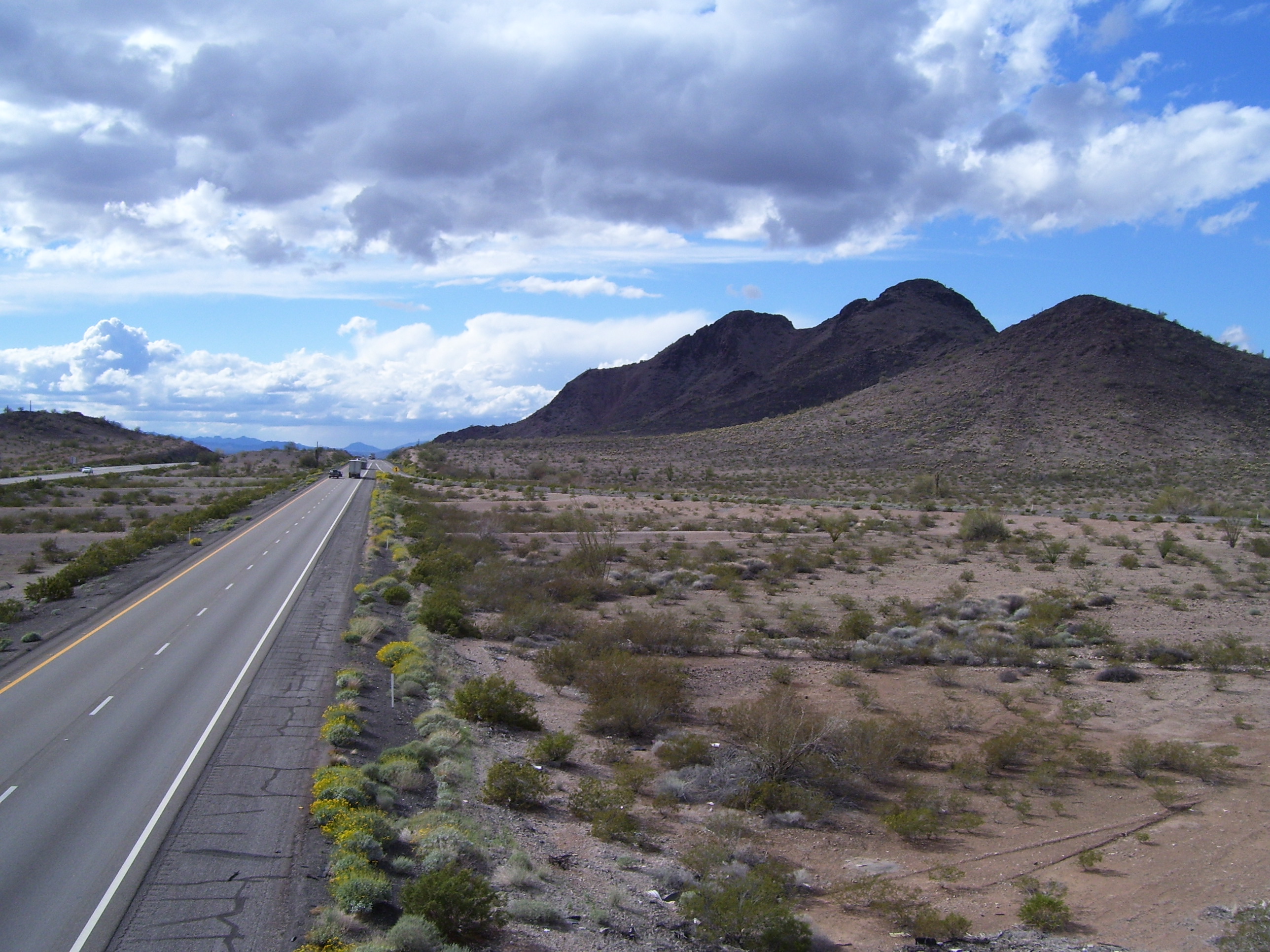 These mountains were pretty cool-looking, especially with the setting sun off to the right, but unfortunately they're a bit far away to really make a good photo. You can right click, view the image and zoom in if you want a close-up. 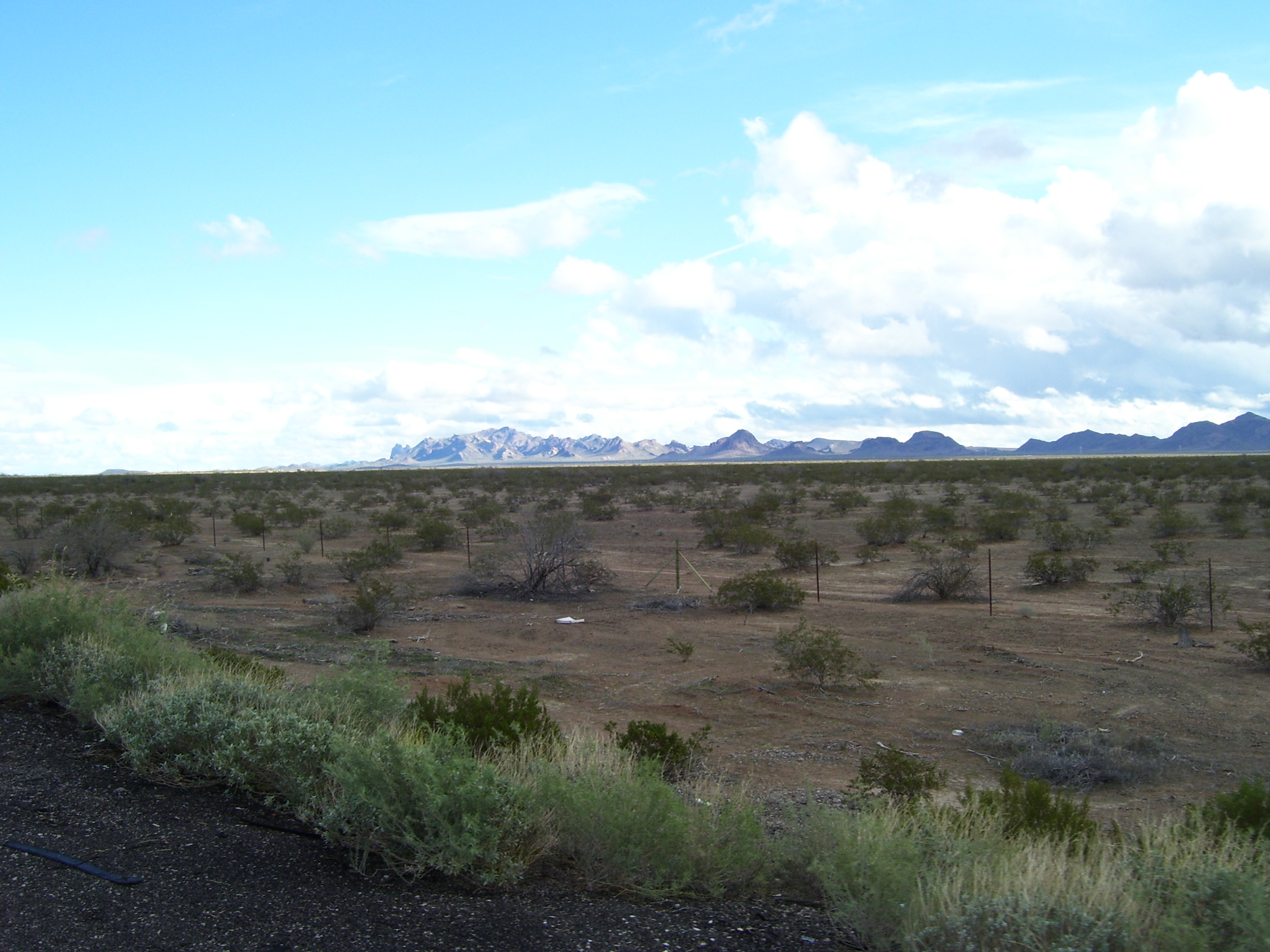 And that was it for road photos, because shortly after this the ride-ending flat happened and I spent the rest of the time getting wet in a thunderstorm, and thumbing a ride from these two guys. John and Morgan of Yucca Valley, California, you're awesome! There should be more people like you. 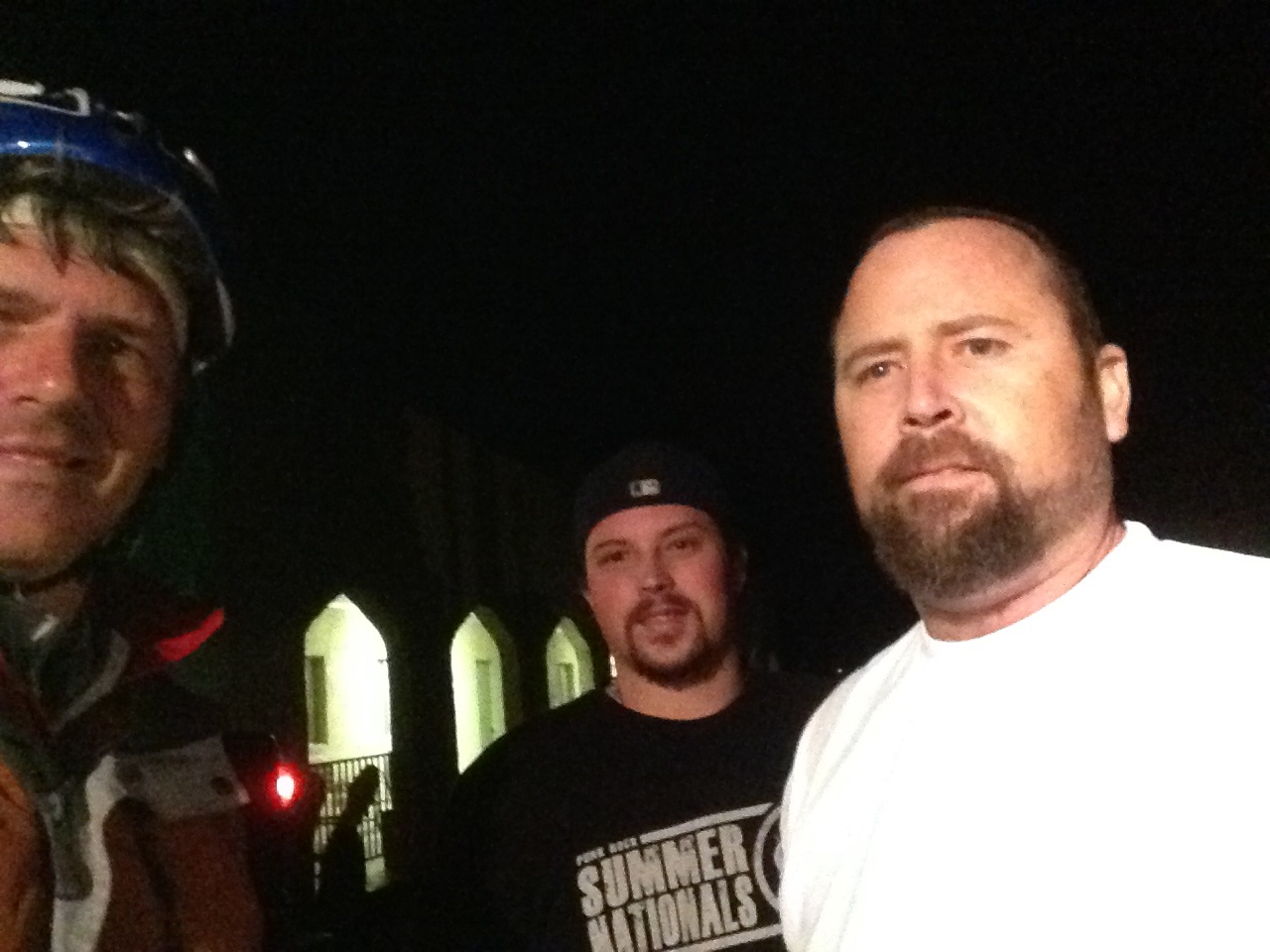 So with all that done, now I have to get to sleep worried about what's going to happen tomorrow with the pump and whether or not I'll make it to a bike shop before closing time. Assuming I get on the road at all, you can bet I'll be counting down each and every mile, begging for no more flats.