Claude to Childress
Miles: 102
Terrain: Mostly one long, slow descent with a couple of hills thrown in there to keep things interesting
Weather: Warm and sunny, light tailwinds at the start, light crosswinds and headwinds in the middle, and dead calm at the end

When I got out of the room this morning at about 9:30am, I expected to only go as far as the town of Memphis (yes there's one of those in Texas, too), about 60 miles away or so. The winds were supposed to come out of the WSW for the early part of the day and gradually move around until they were coming directly out of the south, which would mean I'd be facing strong headwinds yet again, for the third day in a row. However, I didn't make a hotel reservation or anything because I figured I might feel well enough to push another 30 miles, or maybe the winds wouldn't be so bad. Good call, because they weren't. I did get some headwinds on the way to Memphis, but they gradually slowed and stopped until the last couple of hours it felt like no wind at all. In fact I passed more than one flagpole with flags just hanging straight down, which is pretty much a first for this trip.

Once I got moving, the new chain skipped around on me quite a bit, which it hadn't done yesterday, so I stopped and put some lubricant on it and inspected the links. One link in particular was very sticky (probably the one the bike repair guy had to remove so he could install the chain). I twisted and flexed that one a bit and added some extra lube, making sure to work it in by bending the link as much as I could in all directions. This bought me about 45 minutes before the chain started jumping again. After repeating the process I had to wonder if I'd be putting up with this same annoying procedure all day long, but actually that second effort seemed to take care of it, as I never had any more problems after that. Maybe it was just cold in the morning? Who knows? It got steadily warmer all day until I got down to short sleeves for the first time in quite a while...into the mid-70s for the first time since California, I think.

The only other bike issue was a single flat right after I visited a rest area, and I was able to roll back to the place and use one of their picnic tables to have a seat and patch the tube. It's rare to actually be able to sit down comfortably to work on a tire like that. Usually I'm in gravel or leaning against a guardrail or signpost or something. The flat was caused by yet another tiny metal wire, almost certainly from a steel-belted truck tire that came apart somewhere on the side of the road. Texas SR 287 is not quite a highway but sure gets a lot of truck traffic, as I mentioned yesterday, so that's not too surprising, I guess. Anyway, I haven't had a flat for a couple of days so I guess I was due for one.

Here's a look at what the terrain looked like early in the day. Classic Texas open land, with some cattle hanging around the windmill, and not much else going on. Perfect weather today, too. 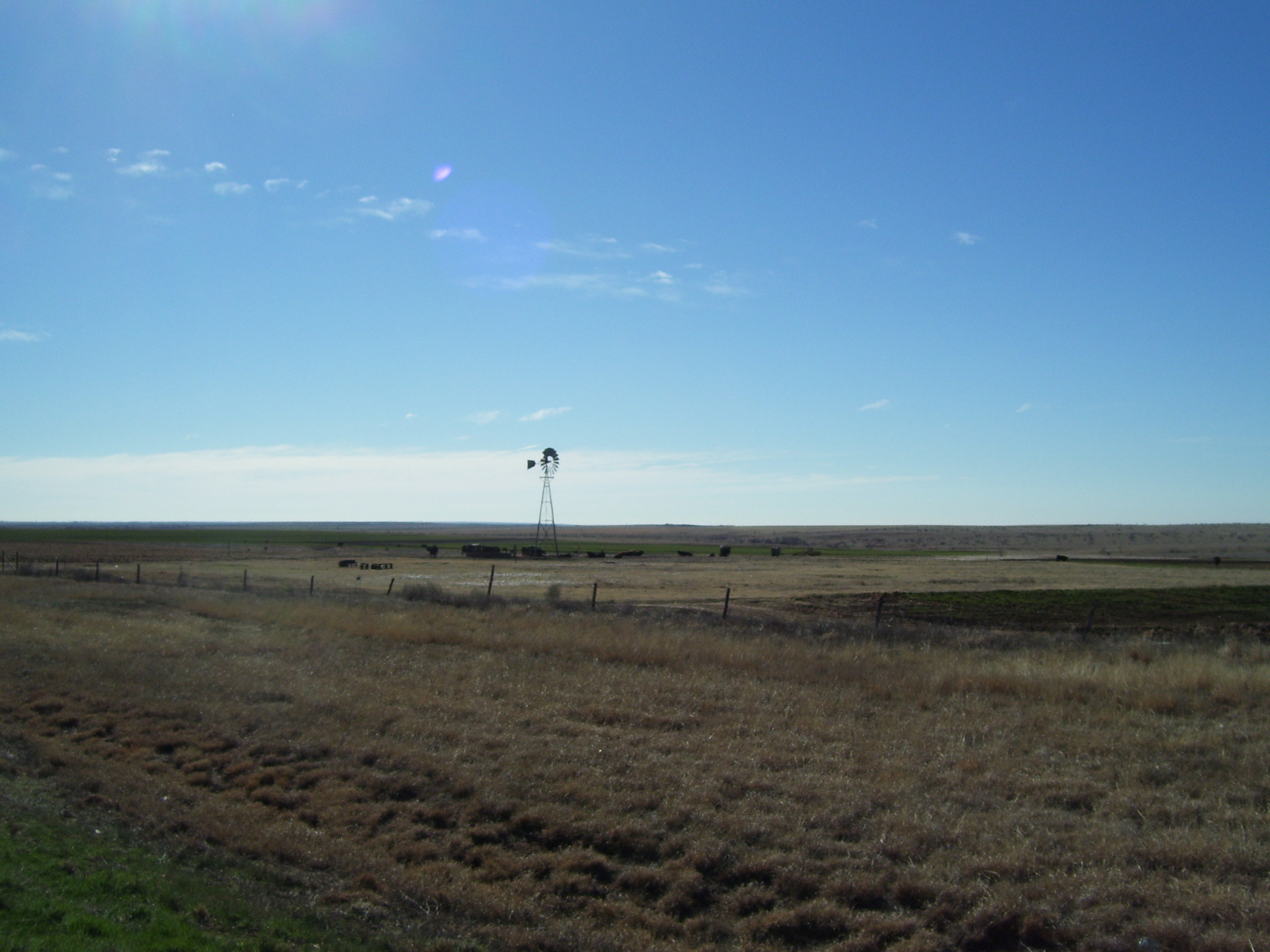 My first rest stop was in Clarendon, which would've been the "miracle tailwind" destination for yesterday. Here's a shot of their beautiful (and recently restored) county courthouse. 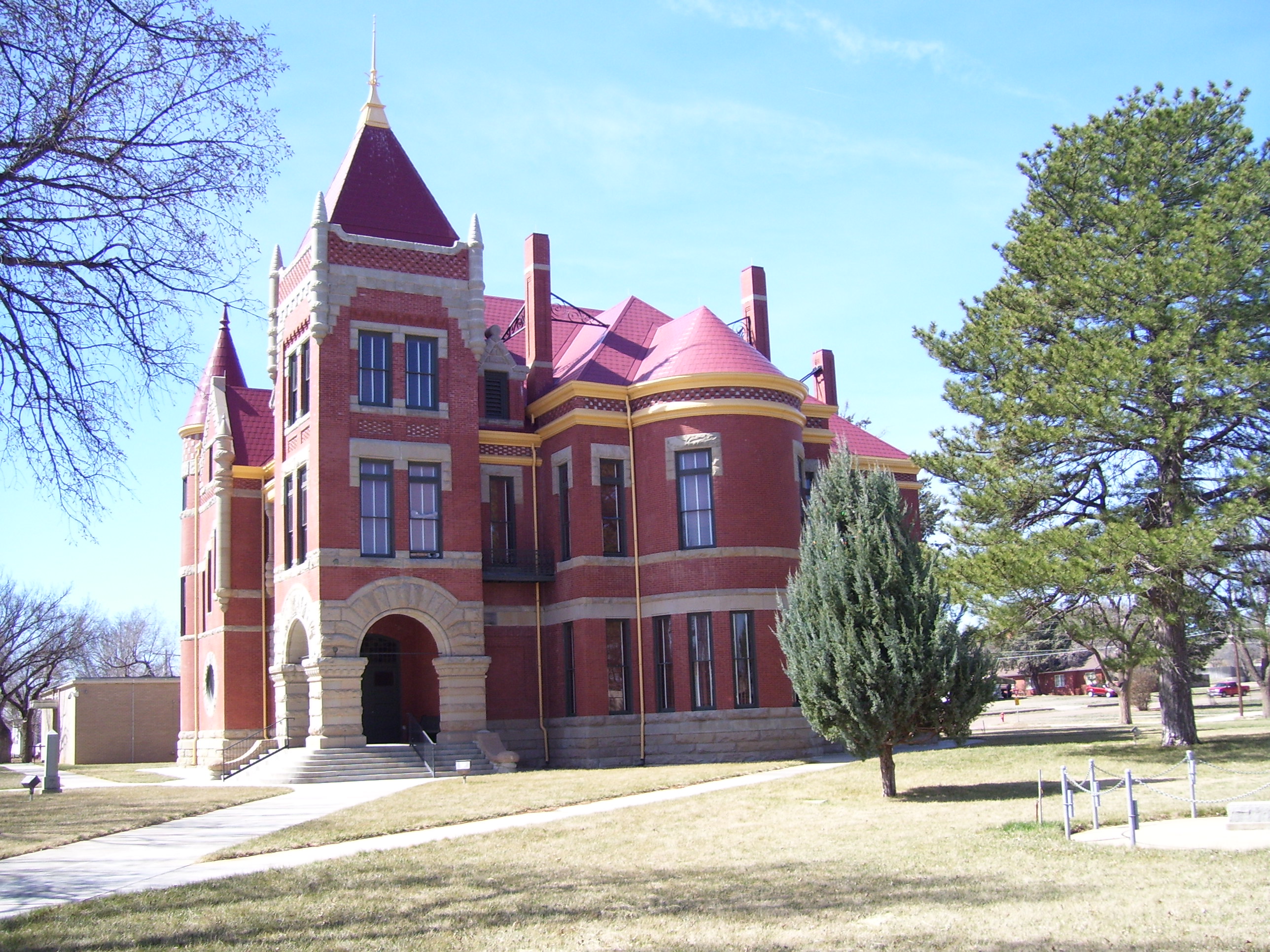 Here's that rest area I mentioned earlier. Using a rest area in Texas comes with its own unique dangers! 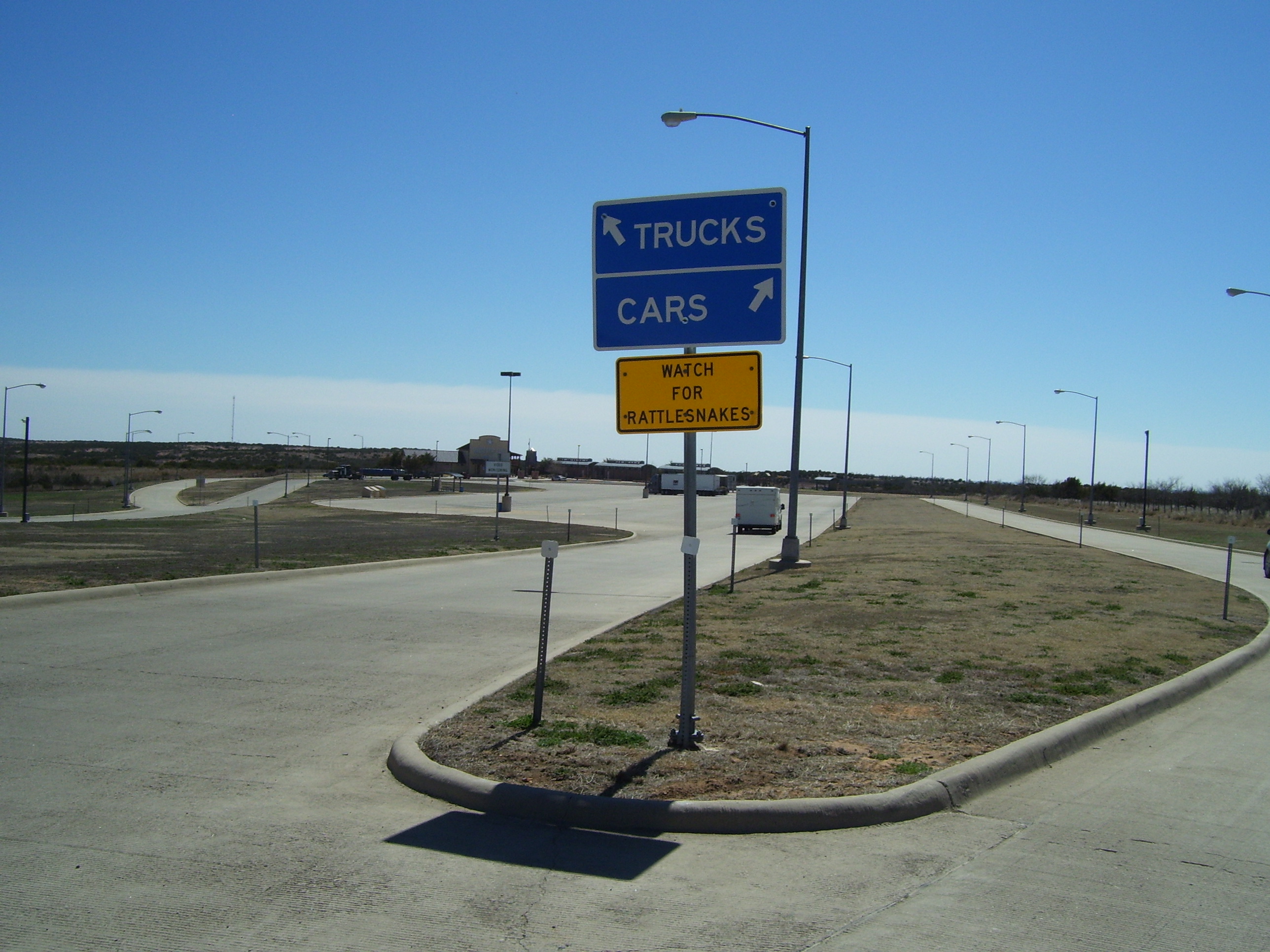 I actually walked around for a couple minutes looking for snakes to take a picture, but never saw any. (Rattlesnakes are hard to miss.) After fixing the flat, I rode on to the town of Memphis, my planned stopping point, but it was only 3:30 and Childress was only about 28 more miles. I decided to go on. On the way through town I came upon this unique shop...ever wonder where those silhouette things come from? Now you know. 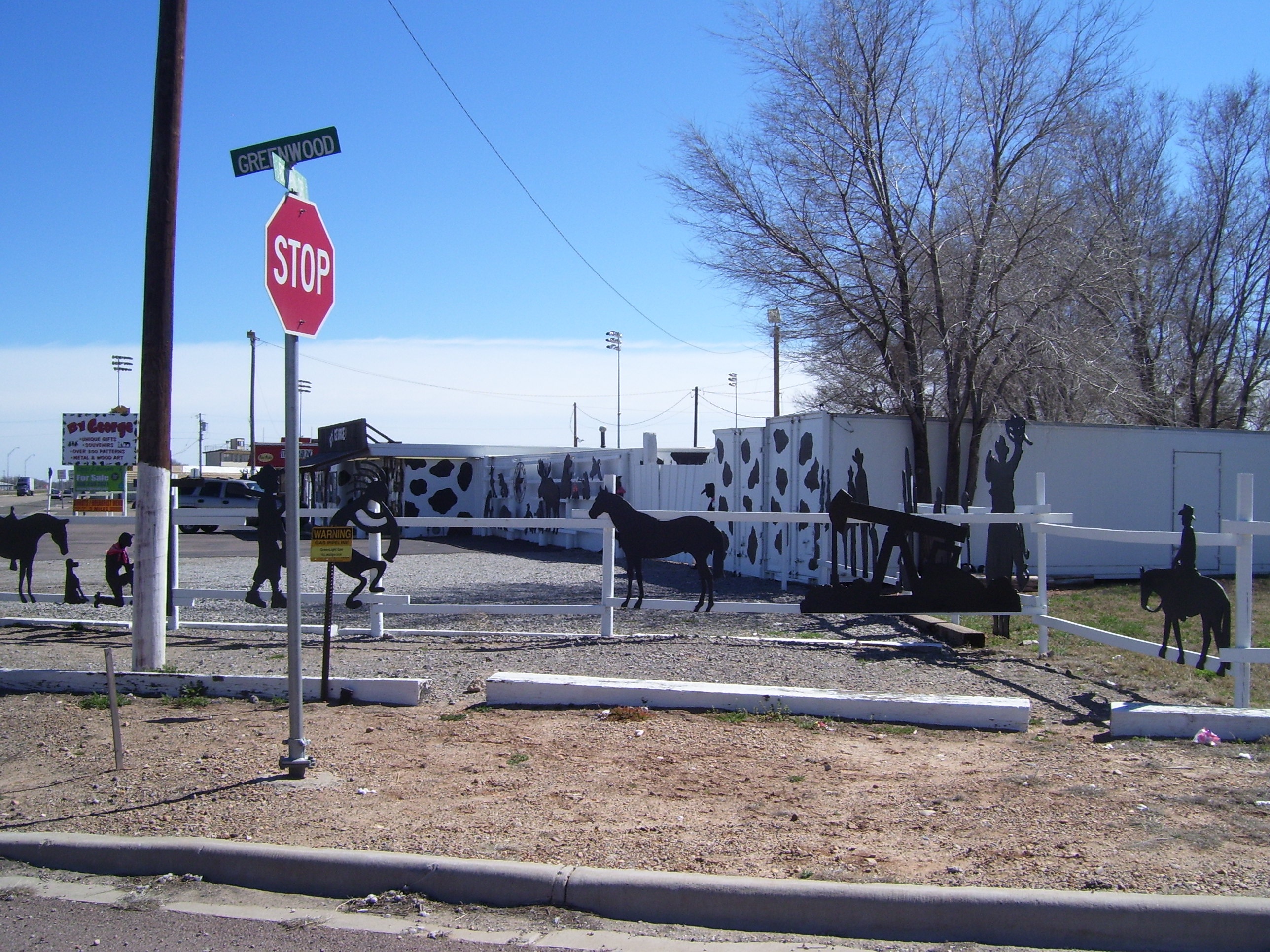 Shortly after this, the open land I showed you earlier started turning into farms, most of which had just been plowed. What crop, though? This wasn't hard to figure out... 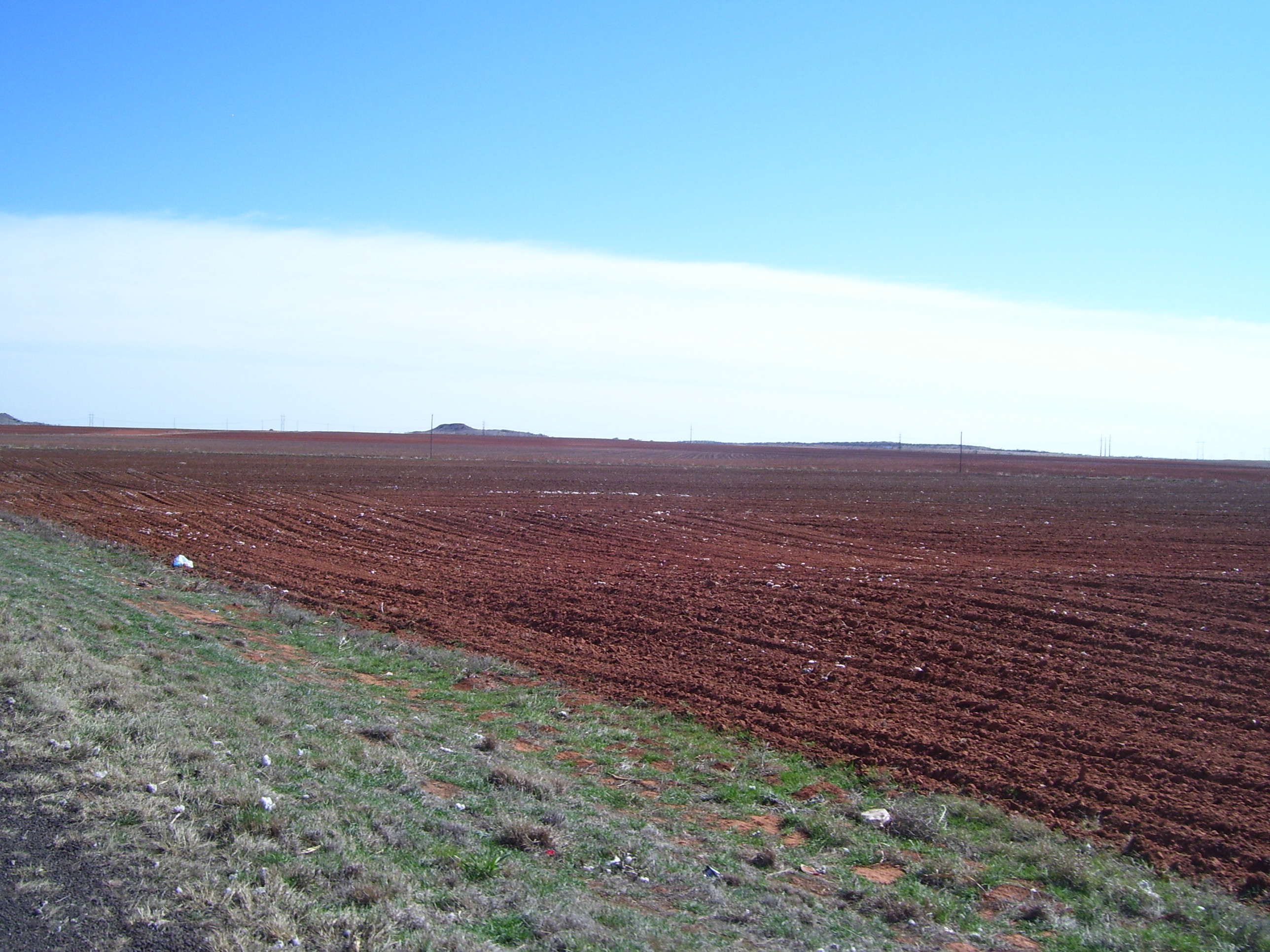 The answer was clearly visible all along the side of the road pretty much everywhere I went for the rest of the day. Cotton! 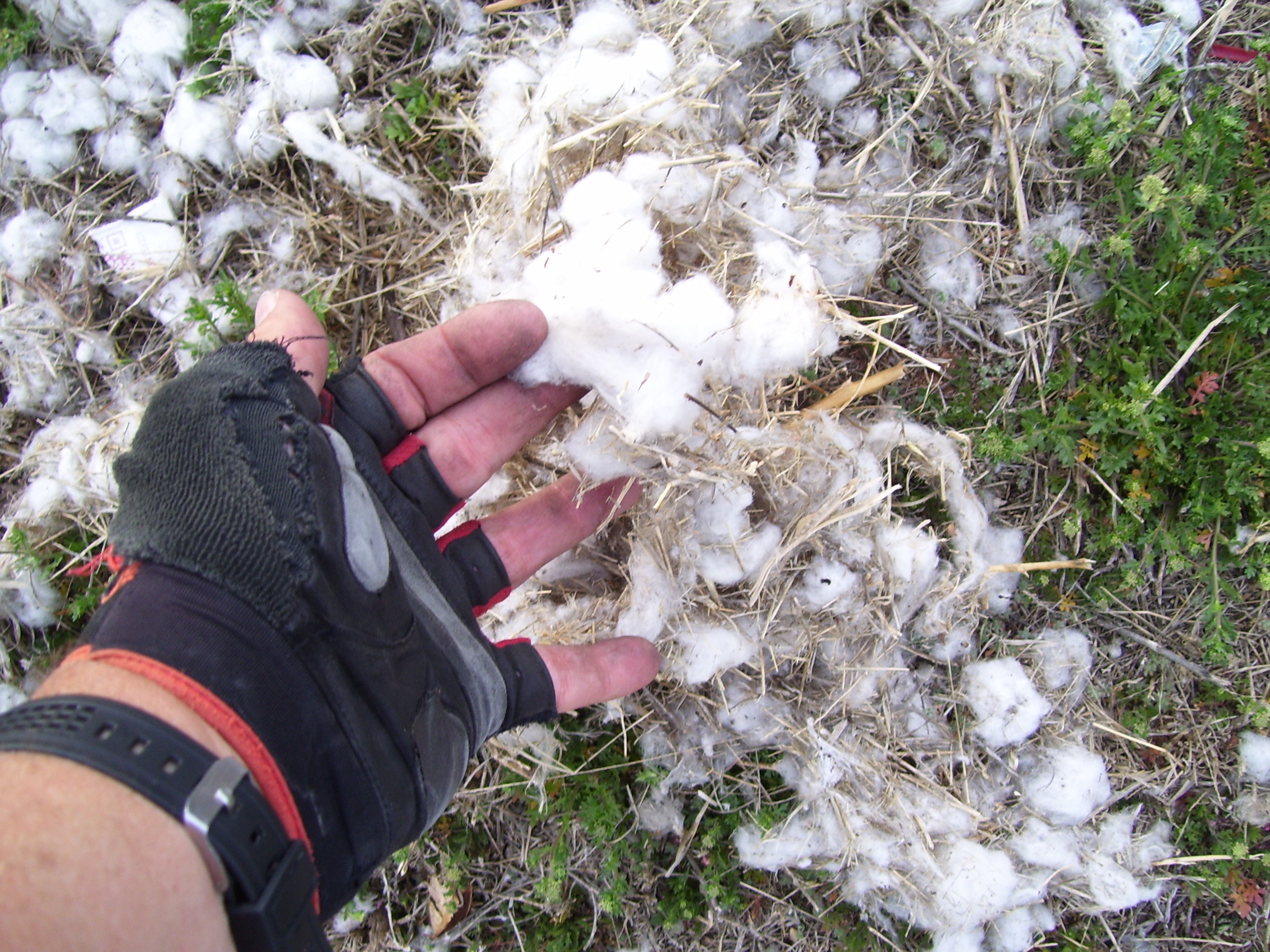 A bit later on I came to this unique hill sticking up out of the otherwise flat landscape. An extinct volcano, perhaps? Nah, it was only about 100 feet high, maybe. It's a lot closer than it looks. 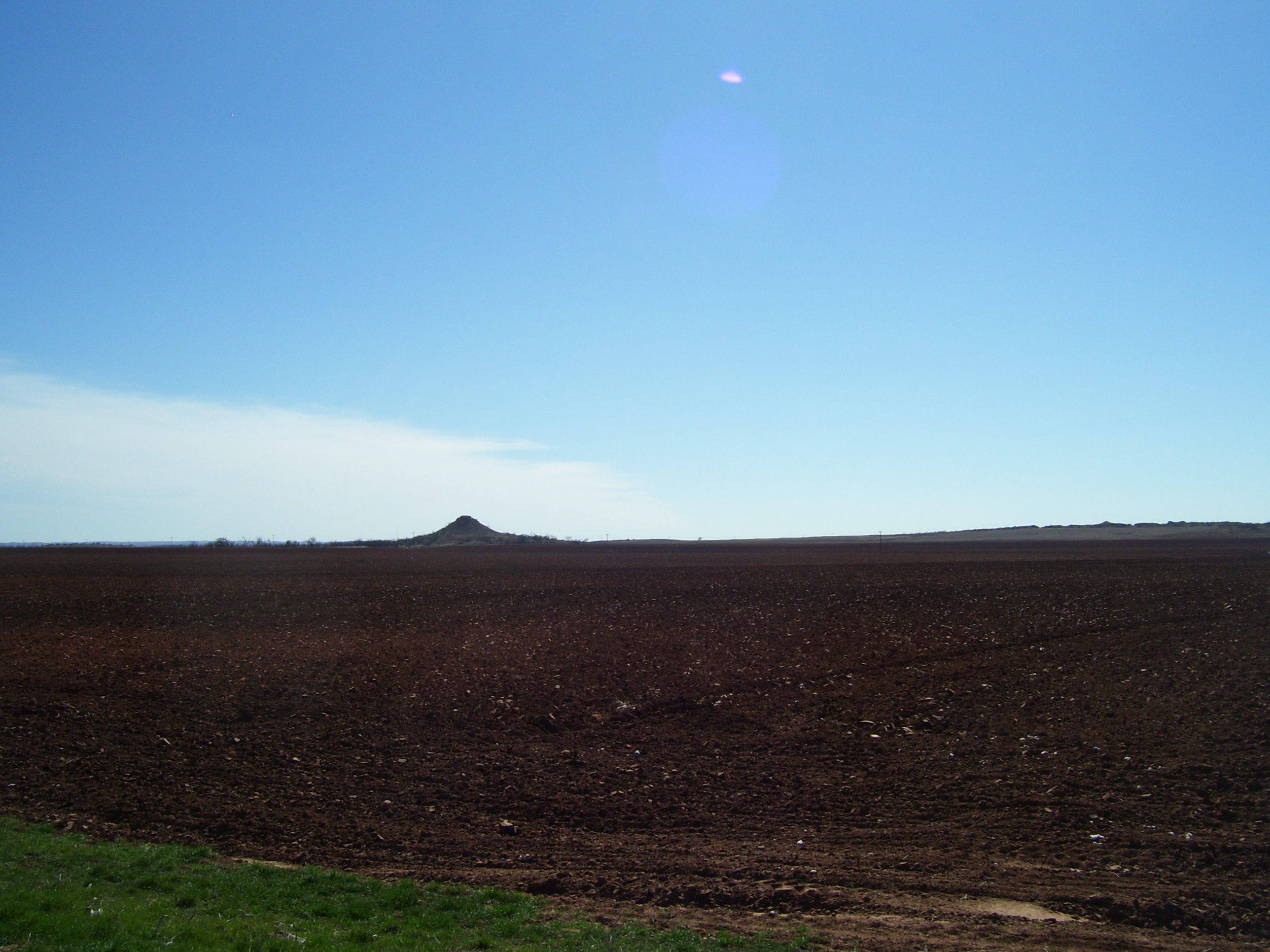 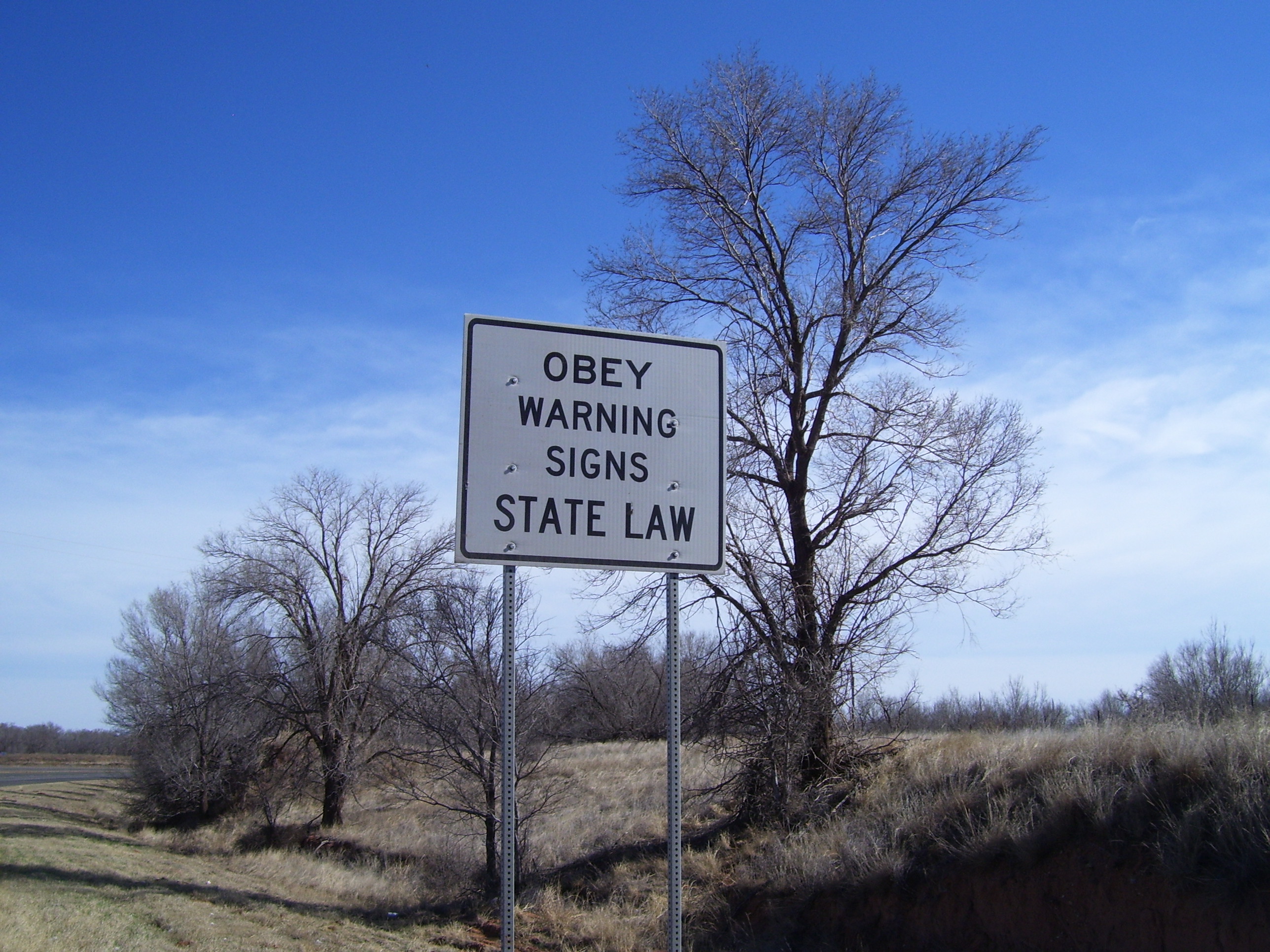 About midway between Memphis and Childress I rode over the Red River, which as I'm sure you're all aware (ha), partially forms the border between Oklahoma and Texas. This particular piece of it is west of that border, but it turns out I'm only a few miles from Oklahoma. In fact, if I really wanted to, I could pop over there tomorrow with about a 10-mile side trip. I'm not going to, but I could, that's all I'm saying. Anyway...as you can see there's not a whole lot of river to be had at the moment, although it's not hard to figure out where it got its name. Looks like a fun place to bring an ATV. 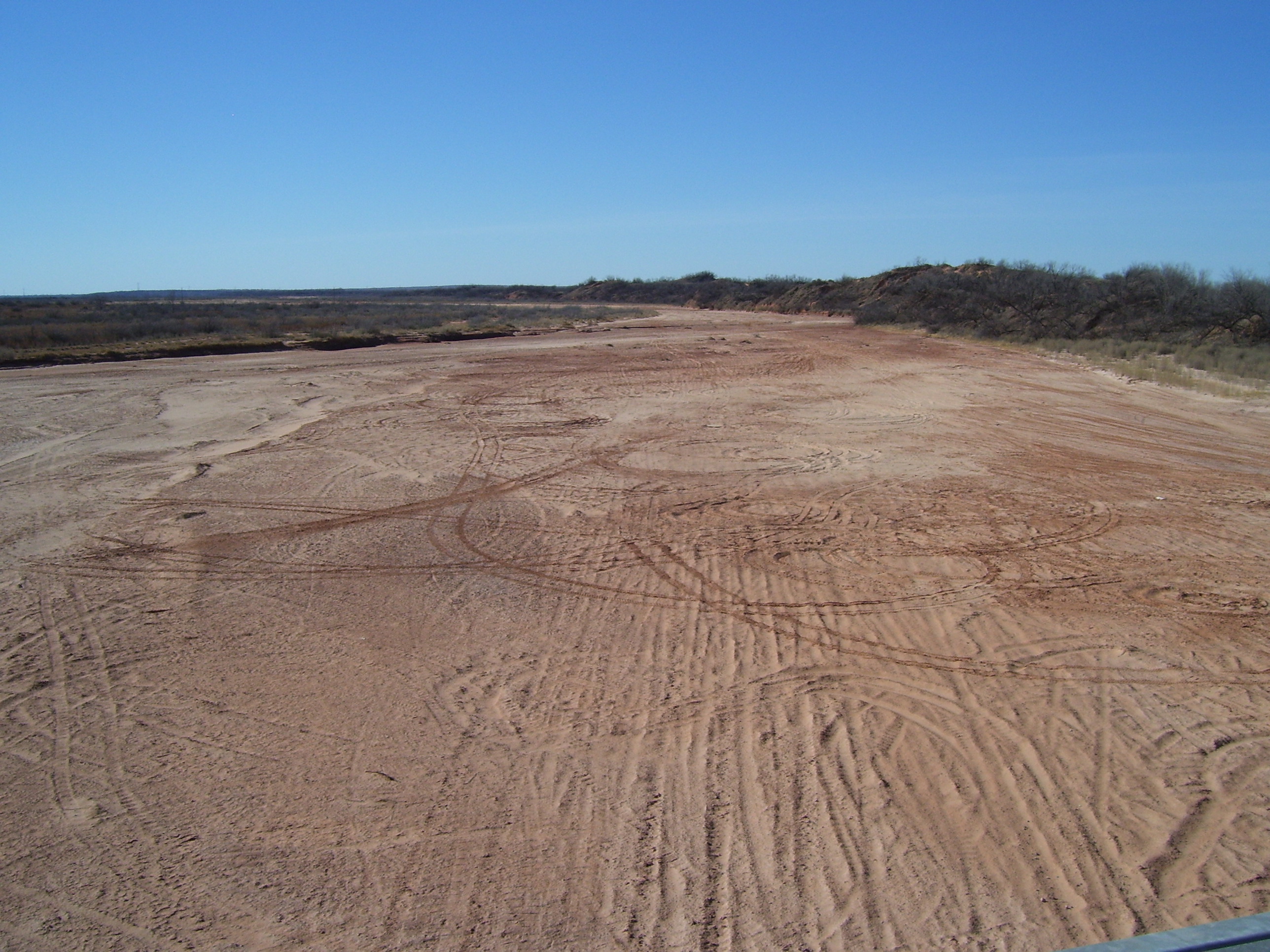 Oh and just in case you think the Texas panhandle is all flat, here's a hill. Look, right there! A hill! Seriously. It goes up and everything. 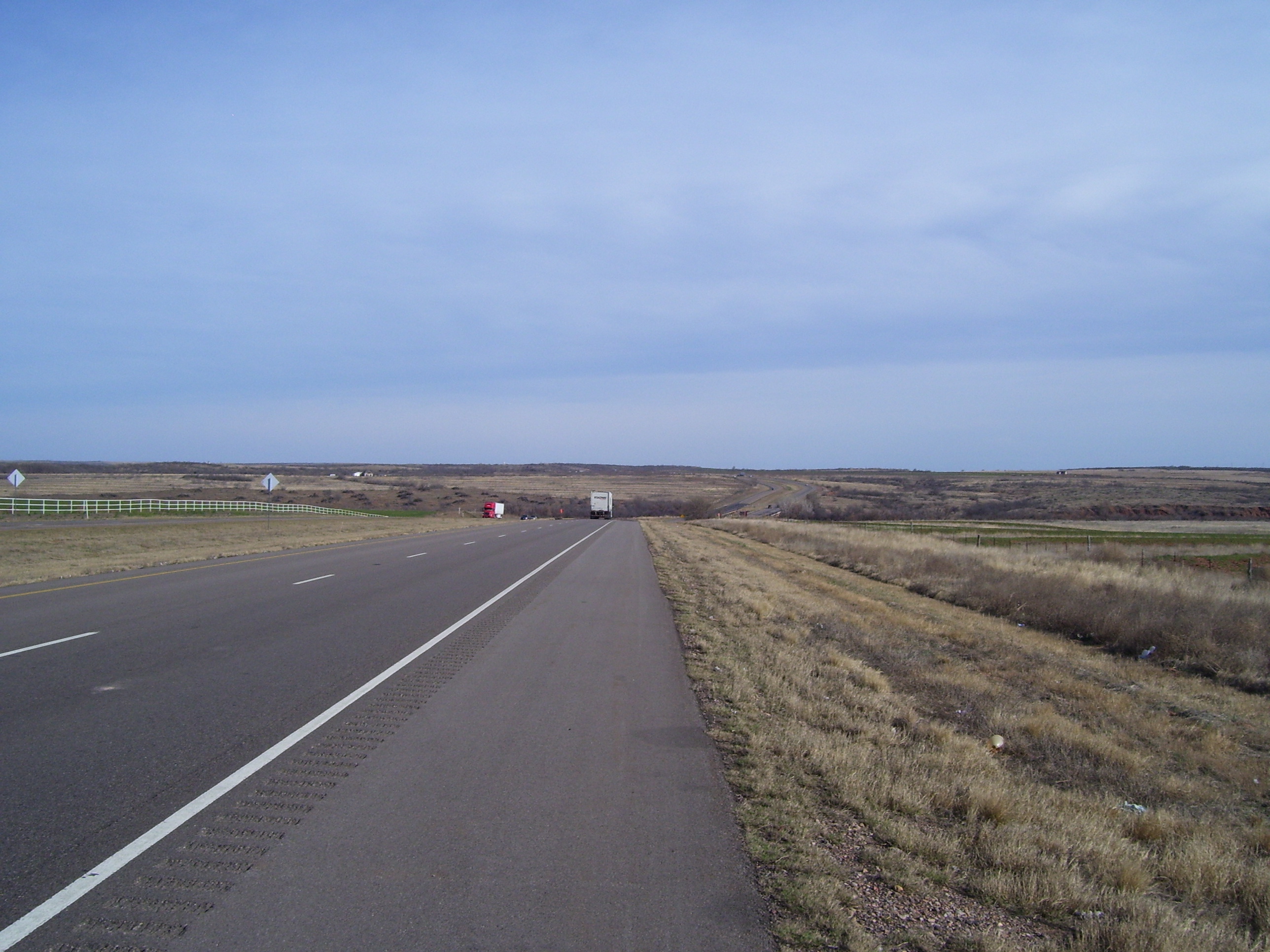 Sometime around 6:30 I reached Childress after having biked about 94 miles (I did take a couple of quick side trips earlier, so the numbers don't quite match what the map shows). That means even with those delays as well as the flat, I still got all that way in only about 9 hours, without even much of a tailwind. Not bad at all. The extra time allowed me to ride around Childress a bit, snap this photo, pick up a few caches, find the cheapest possible room ($40) and figure out where to get dinner (a "Golden Chick" fried chicken place). 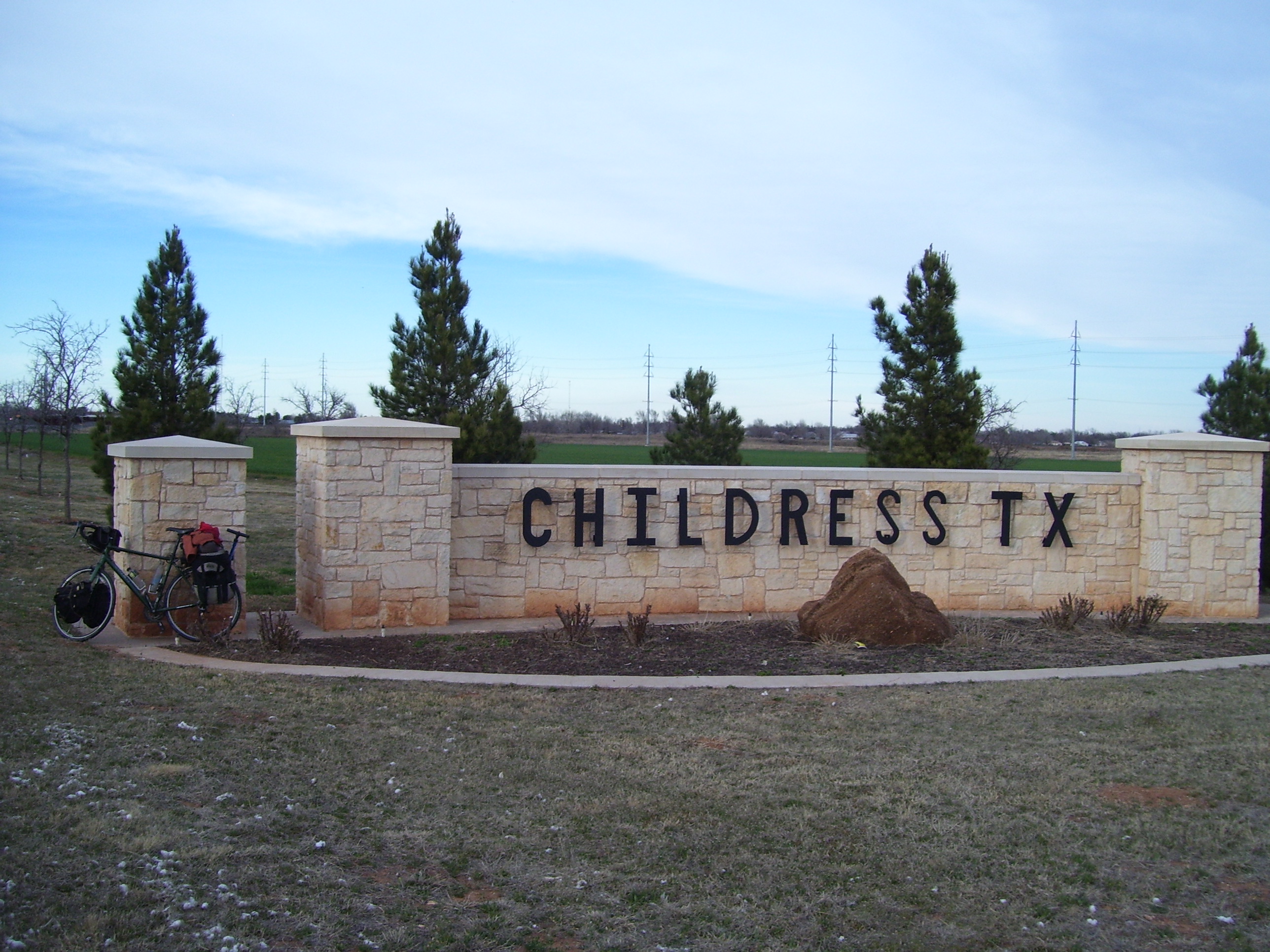 Oh and I also visited the downtown area. Not exactly a hopping place on a Sunday night, is it? 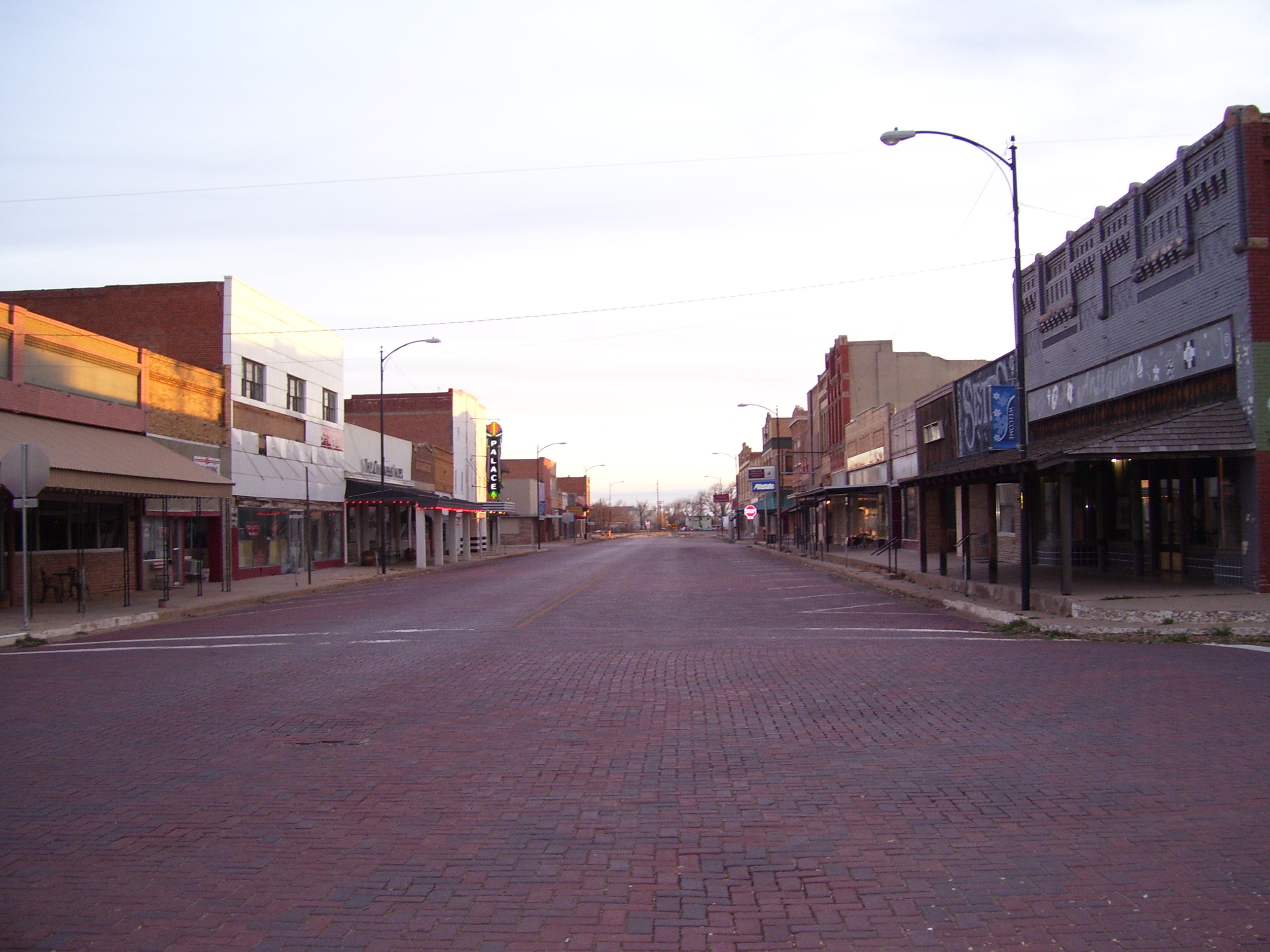 The main drag through town was a lot busier, I assure you. Anyway, I got back to the hotel by sundown, enjoyed a bucket full of chicken, and checked out the route for tomorrow. The winds will decide how far I go, but the town of Vernon is the short option. I should hit the halfway point for the bikeabout sometime in the afternoon!