Vernon to Bowie
Miles: 100
Terrain: Minor ups and downs
Weather: Warm and sunny, nasty crosswinds and headwinds for the first 70 miles, then tailwinds to finish things off

Yep, another century, my fifth one this trip...this one fully earned, with no extra padding added at the end. There was a small amount of touring going on midway through in Wichita Falls, though. Also, the mapping thing would not let me select route 287 as a legal bike route (even though it was) so there's this series of jogging turns shown north of the highway on the way into town...just ignore that stuff, I rode right down the highway without any trouble.

The weather forecast showed 20mph north winds changing to northeast by midmorning, and this turned out to be correct. As I rode mostly east that meant I had severe crosswinds or headwinds (depending on just how easterly the road went) all the way to Henrietta, about 70 miles from my starting point. After that the road bent southeast enough that I got tailwinds for the first time in a while, making the last couple of hours much better (although that was the part of the ride that went mostly uphill). I still made it by dark, though.

One thing about crosswinds coming from the north while you're going east...they come across traffic, which means every time a truck zooms by at 65+ mph, it delivers a vicious wind slap that tries to knock you off the road, or worse, creates a kind of mini-vacuum that tries to yank you towards traffic. Every truck or bus or trailer that went by had its own different effect and when there were two or three of them going by within seconds of each other (or simultaneously if they were in alternate lanes) things could get really challenging. I found myself carefully listening for the sound of truck engines, and making sure I had a firm grip on the handlebars when one went by. At least the road had a nice wide shoulder much of the time, sort of like this: 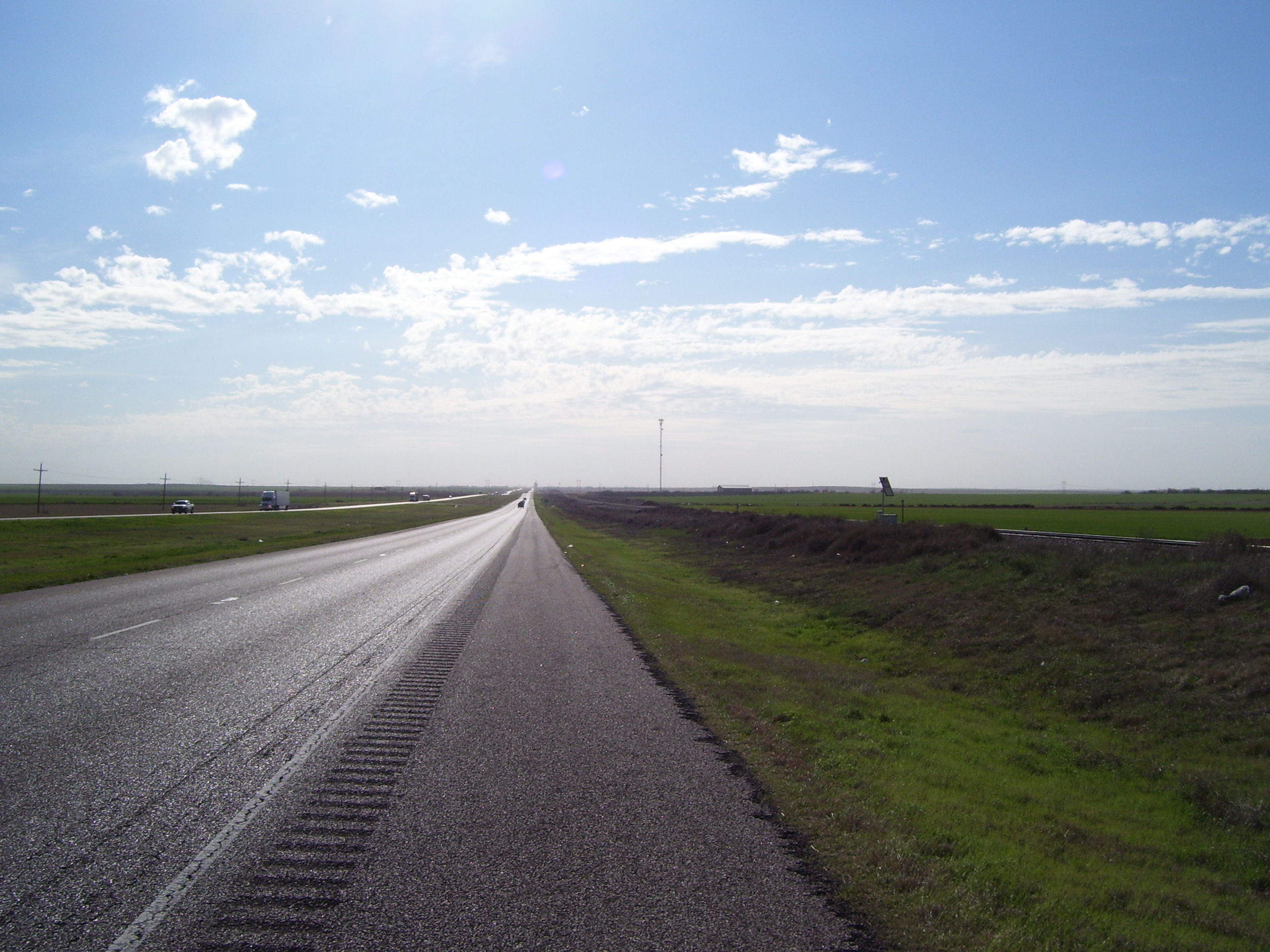 Not a lot to see early in the day, actually. I spent most of the time hanging on for dear life and waiting for the road to bend a little bit more southward so the winds would lessen up just a bit. Upon reaching Electra, I exited the highway and took the business route through town, just to get away from the constant truck slaps. Electra, by the way, is chock full of these pumping stations (this photo doesn't give a really good idea of how many there were...but when I took this picture, I could look all around in every direction and see these things everywhere, slowly cranking away). 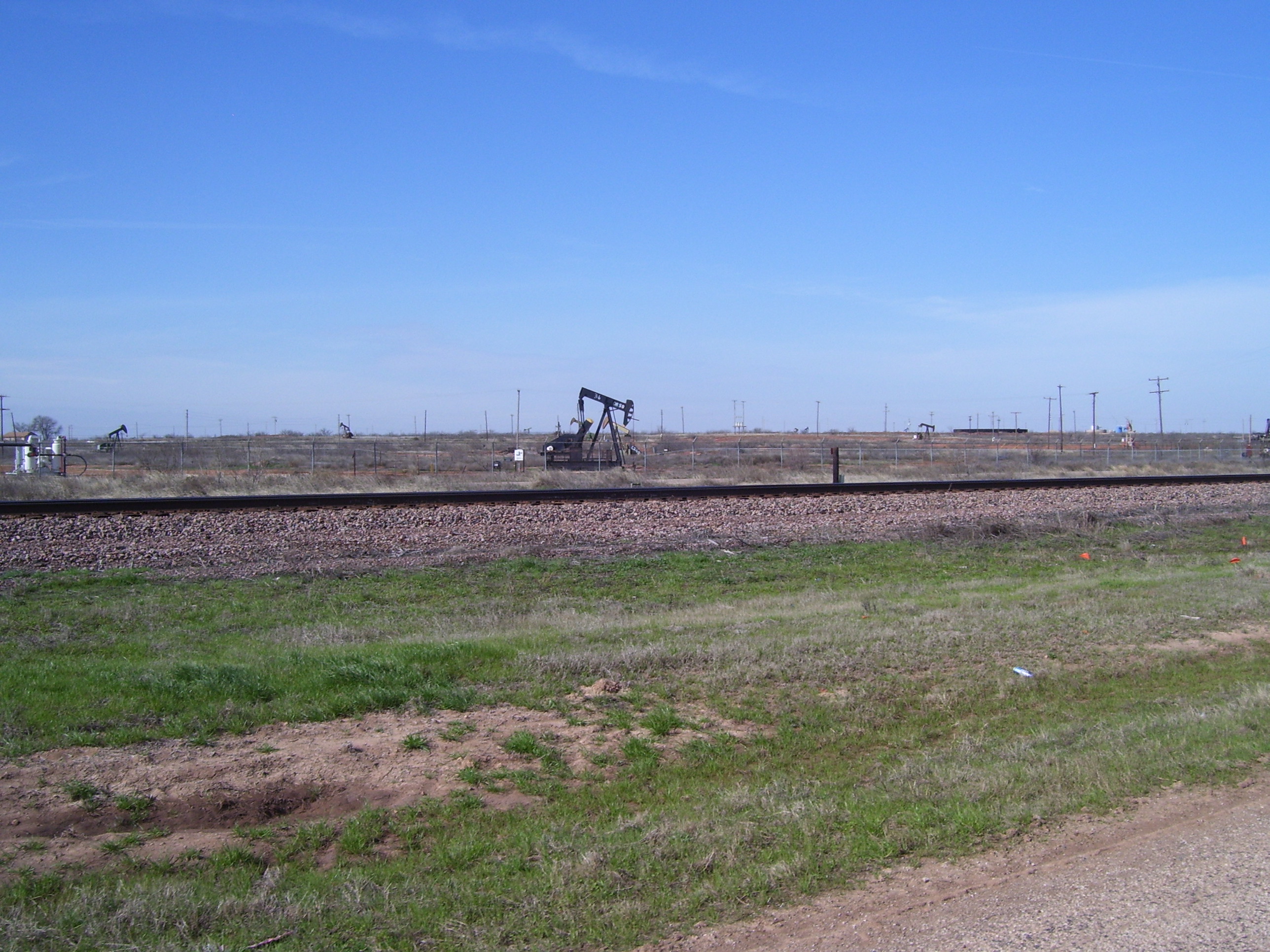 Also, apparently, in Electra it's perfectly normal to drive on the railroad tracks. Maybe it helps deal with congestion on the roads? 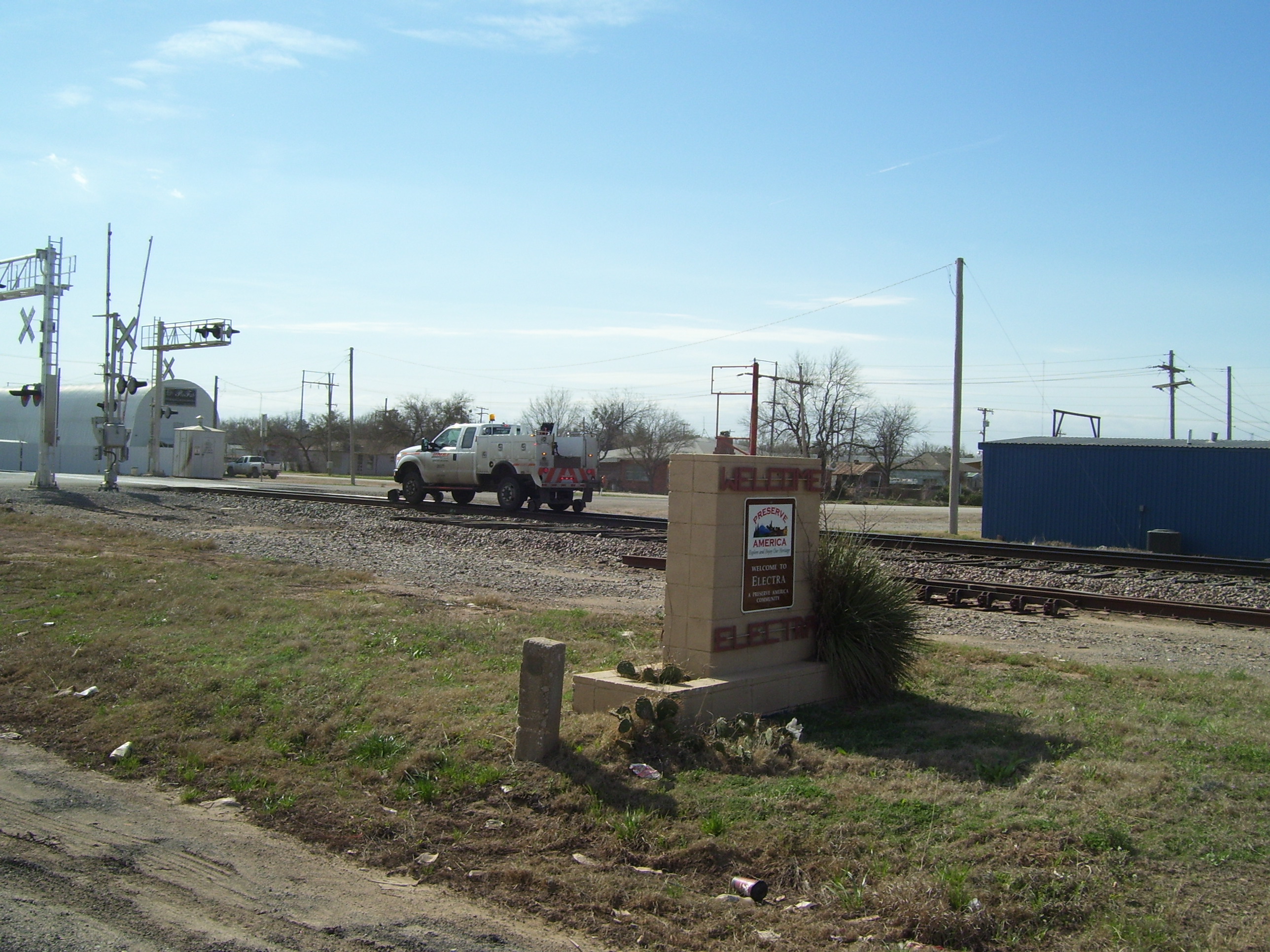 As it turns out, the oil pumping station thingies are known as "pump jacks." Electra is considered the pump jack capitol of the world, apparently, as it has more of them per capita than any other town. They even have them in their city park (along with some old fashioned equipment on display). 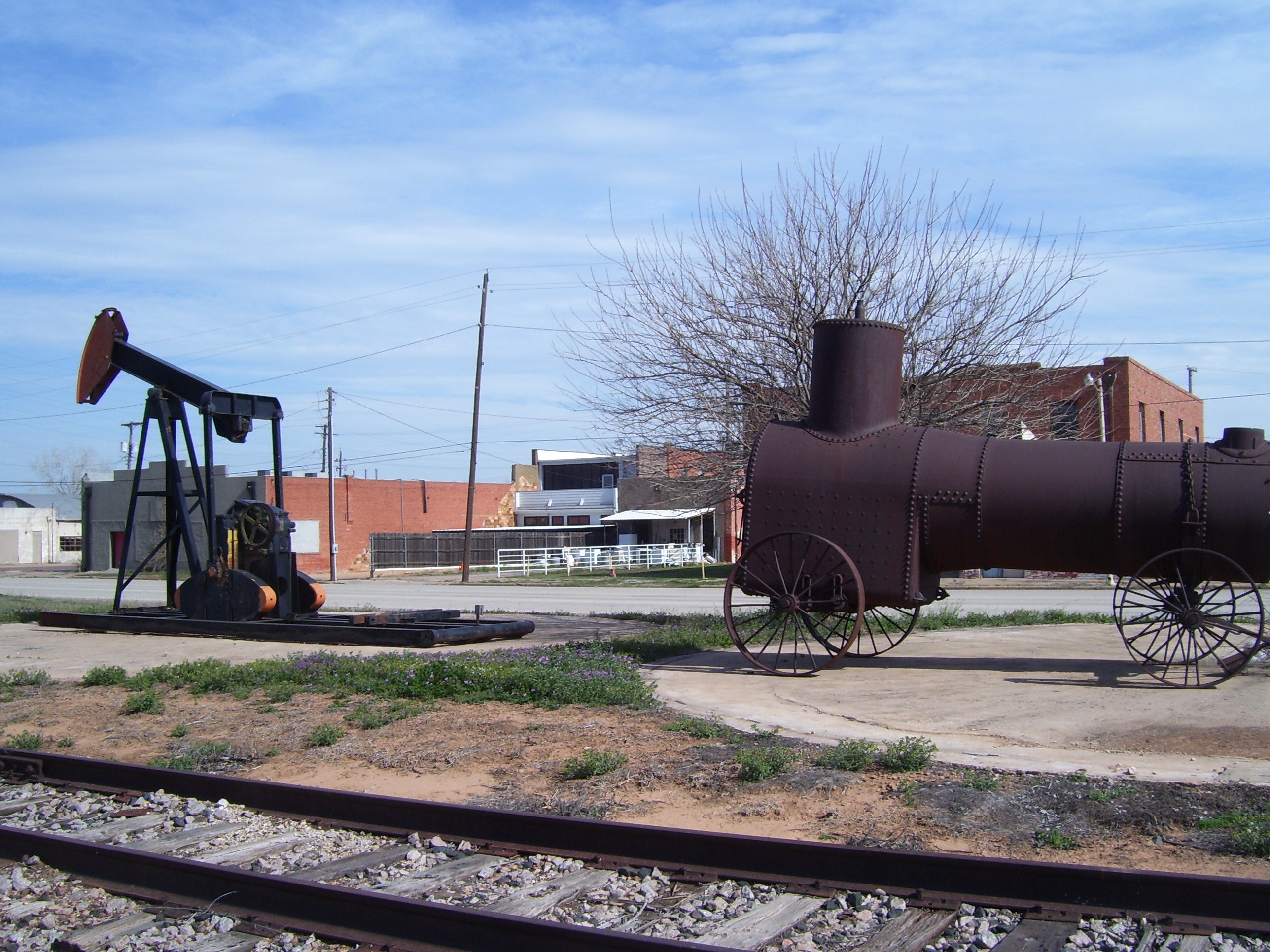 Random Wildlife Encounter...on the way out of Electra I spotted this little guy, probably trying to figure out if he should try crossing the road. Not a good idea, dude....trust me. 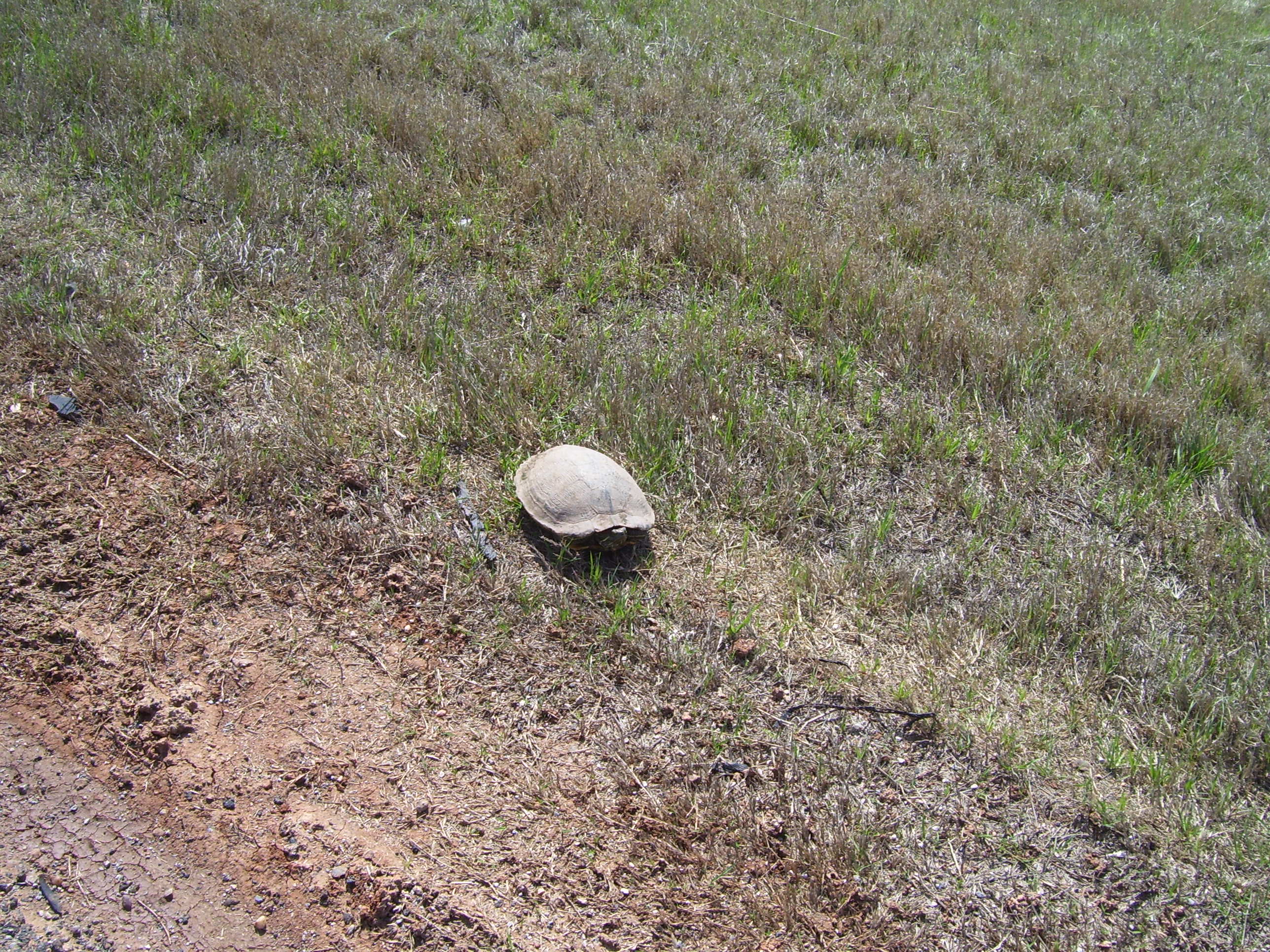 The halfway point of my ride today would be Wichita Falls, the largest town I'd seen since Amarillo, and as I approached I spotted an actual lake! There hasn't been a lot of water to be seen so far on this ride, but now, things are gradually getting less and less arid. There's actual grass and flowers by the side of the road, for example, and less cacti (though I do still see them). The snarly mesquite trees are starting to get replaced by pines and other tall kinds, too. Here's a shot of a nice park where I took a break on my way into town. 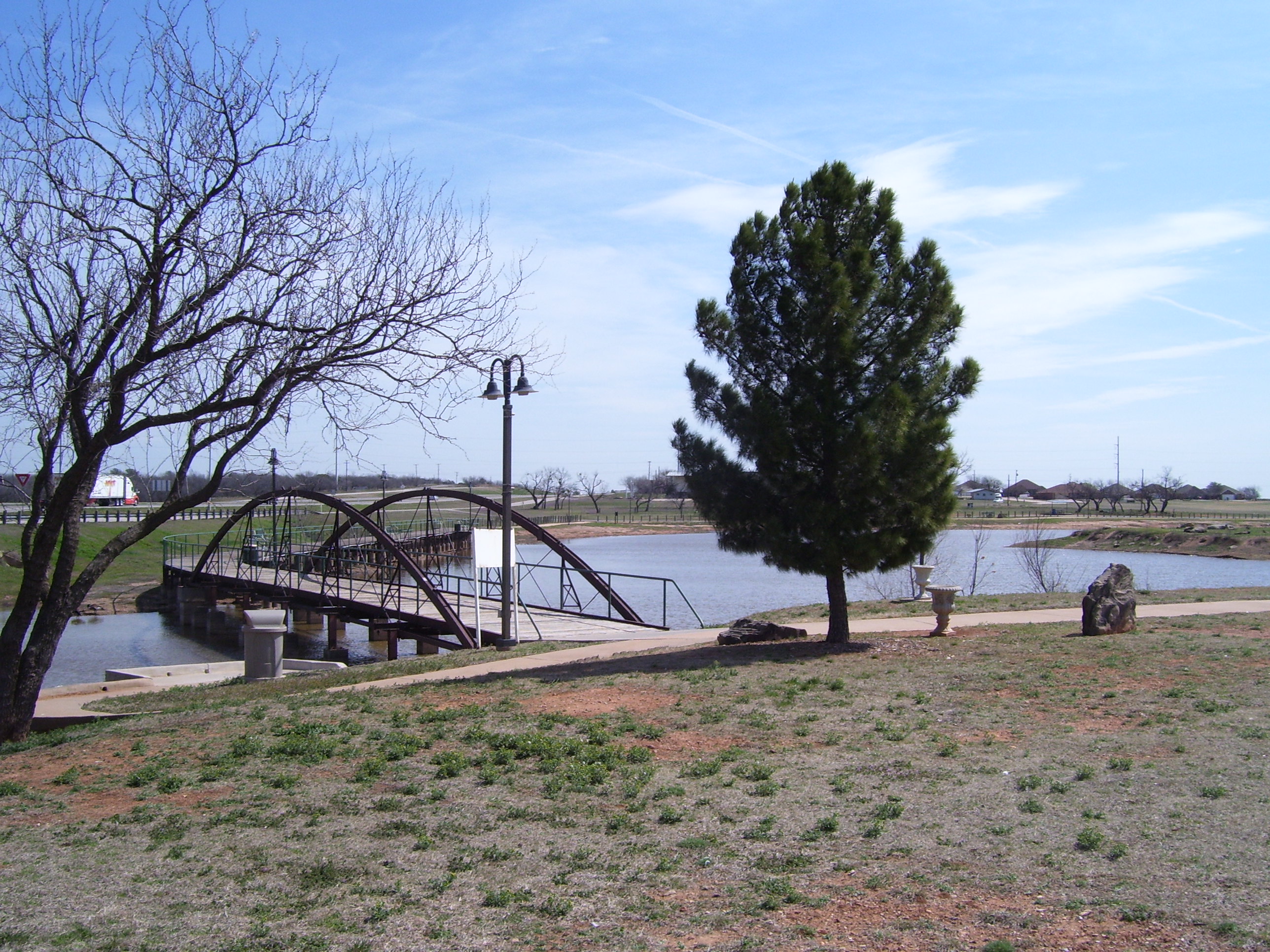 Within the city limits I noticed this odd restriction...what's with the prohibition on cell phone use? Does that have to do with the school or does this particular area just hate cell phones? 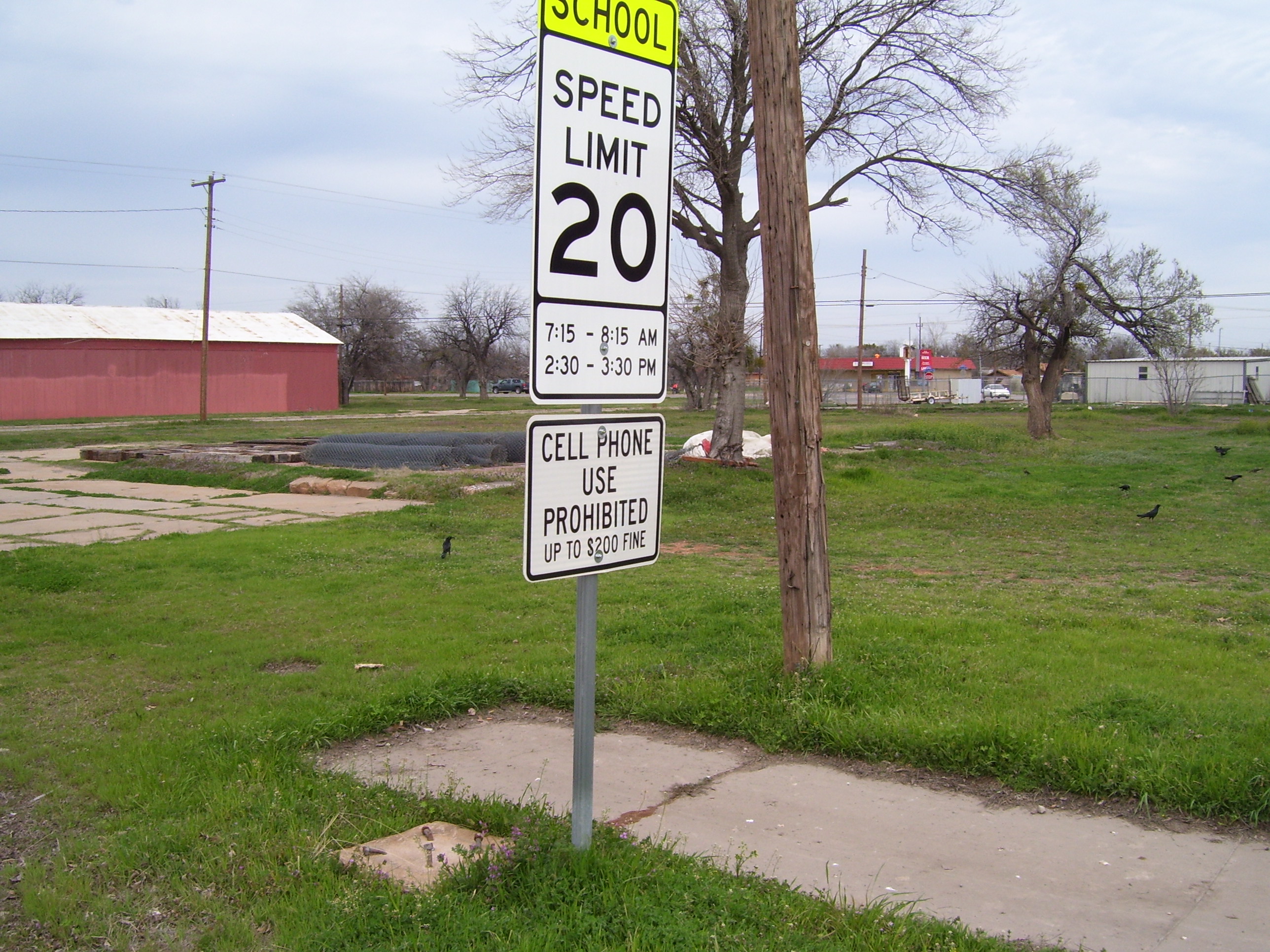 More open water...I crossed a river that actually had water in it! Most of the rivers I've seen have been either dry or just filled with little puddles and lots of mud. 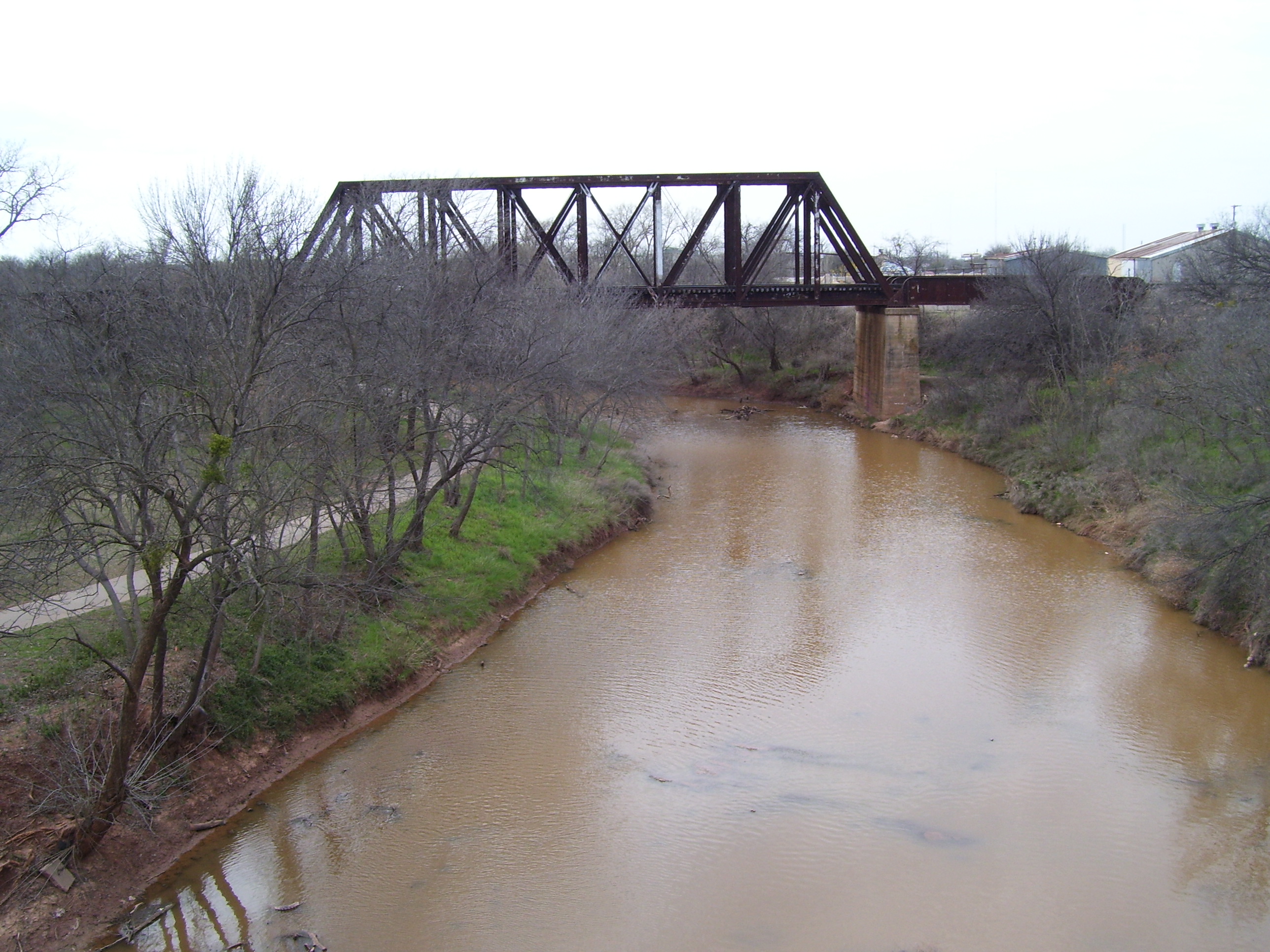 This interesting historical building is known as the "world's littlest skyscraper." As the legend goes, apparently during the oil boom, people were trying to get in on every kind of craze, one of which was tall buildings. A company offered to build Wichita Falls a true skyscraper, but after construction got started they skipped town with all the money, and it turns out the plans were in inches, not feet. Thus you have this out-of-place structure right here in the middle of town: 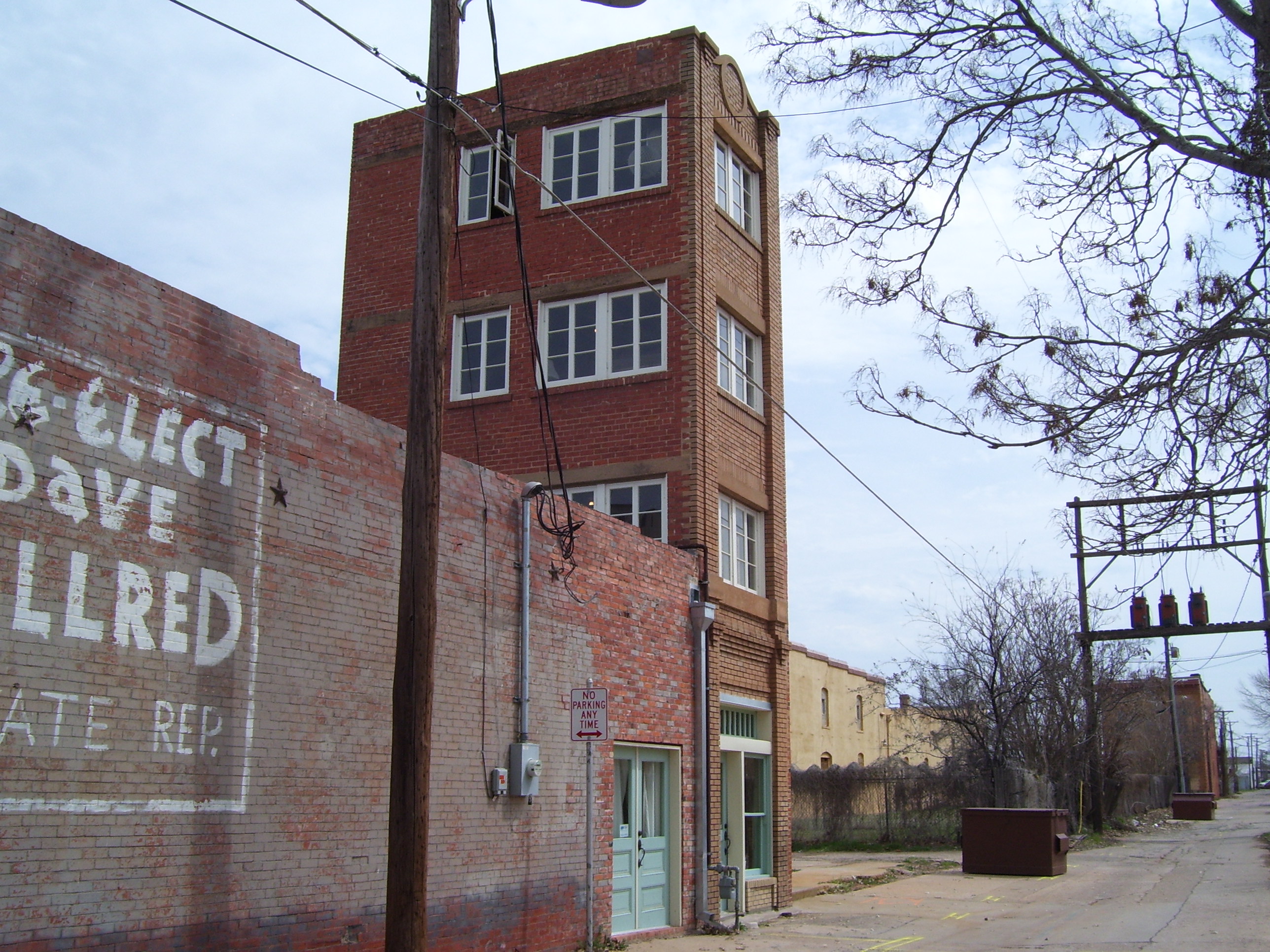 It's probably just a legend, but who knows? Anyway, moving on...at the far end of Wichita Falls I had a decision to make: stop for the day, or continue on to Henrietta and perhaps further. There were plenty of hotels nearby but it was only 3pm and I felt all right, so I went on. Texas has built a lot of these little "picnic areas" along major roads, which are great for breaks, and I stopped at this one to rest before moving on. The crosswinds were still pretty bad at this point so I figured the next 20 miles would be pretty tough, which they were. 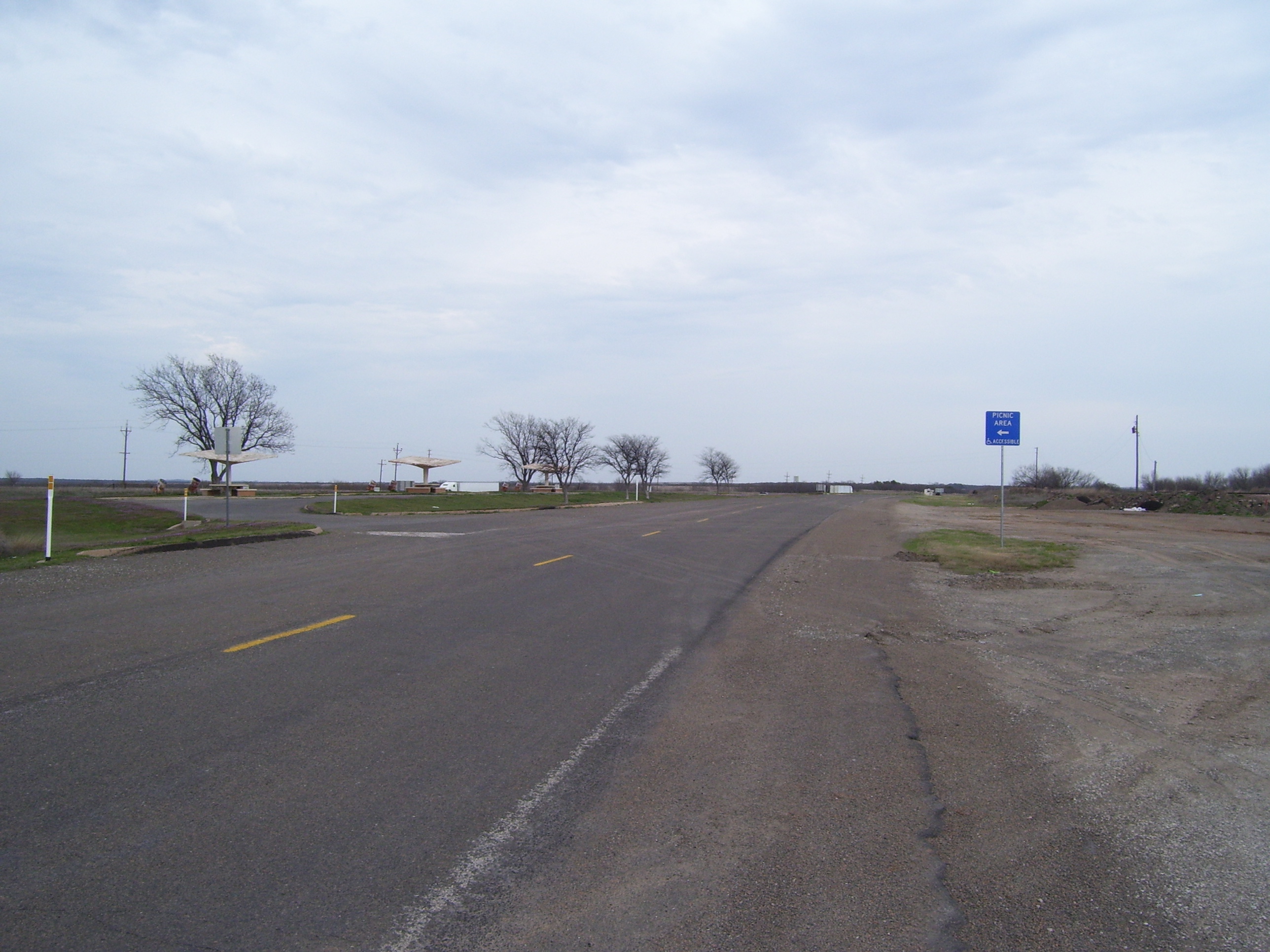 Shortly after leaving the rest area I heard a loud pop from the front of my bike and quickly slammed on the brakes. Fearing the worst, I inspected the tire, but found no damage and it was still holding air. Neither of the panniers were broken, either. Then I tried spinning the wheel and it instantly hit the brake pad, which told me at once what had happened: a broken spoke.

Broken spokes happen occasionally, especially when hauling lots of gear like I do. In fact, I've been lucky to not have one so far after about 1,500 miles of riding. Readers of my previous bikeabout logs will remember I usually get several per tour. Fortunately, this one was on the front wheel (much easier to fix since I don't have to worry about the freewheel getting in the way) and I did have a spare, so I endured the 30-minute delay and replaced it. Most of the time was spent trueing up the wheel (i.e. tightening the spoke to just the right point where the wheel is round or "true," meaning it doesn't wobble and hit the brake pads while it spins). Of course now I have to find a bike shop and get a couple more spare spokes...and of course I just left a major city, too. Oh, well, at least a broken spoke is something you can ride on for a little while, if you must (but you'll have to disengage the brakes, which can be bad if you have any steep descents coming).

Anyway, here's a photo of the broken spoke (on the right) next to a good spoke (left). The spoke I replaced is already on the wheel in the background...it's the silver spoke, as opposed to the nearby black ones. I suspect the one that broke might be one of those that got hit by the front pannier's bungee cord early in the ride...it's in the same spot, which I remember because I had to tighten a couple of the spokes right next to that reflector. Anyway, it's fixed now, I just hope it holds up. 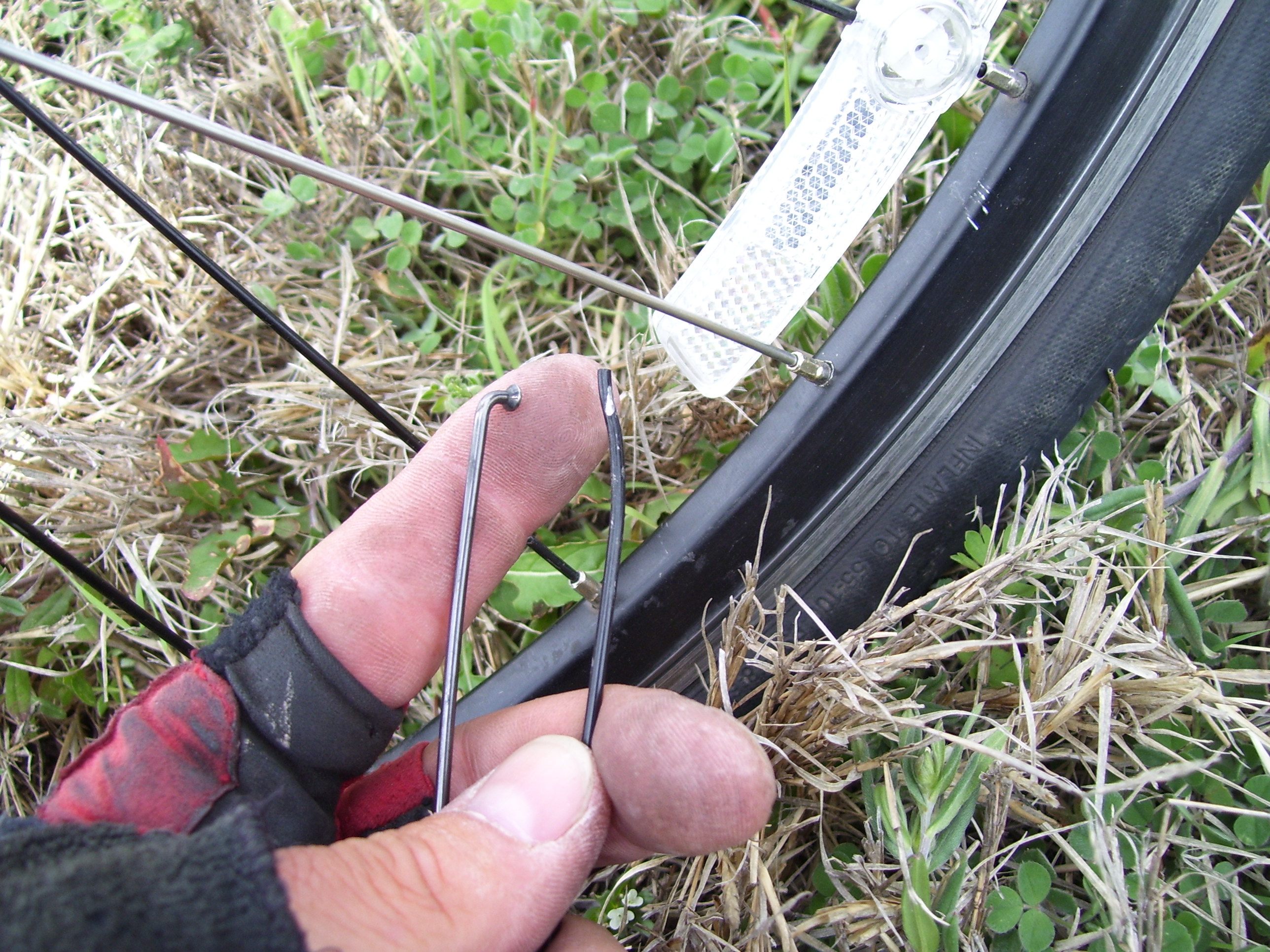 Moving on, I soon approached Henrietta, a small town with very little choice in lodging. In fact, they had some really odd places to stay, as evidenced by this sign here: 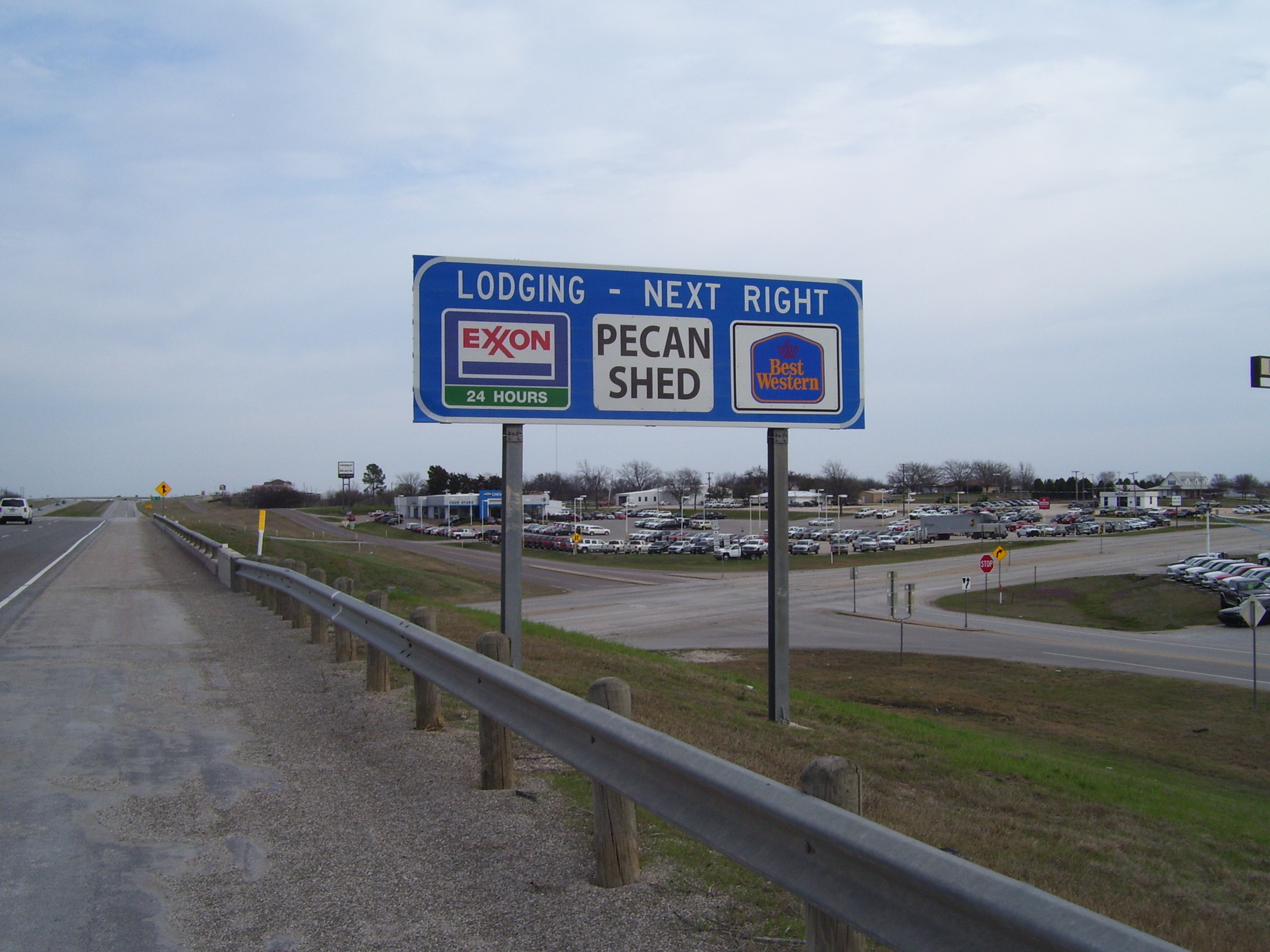 The Best Western wanted $100/night (after tax), the Pecan Shed was full and the Exxon didn't have wi-fi, so I kept going. (haha) Well, one of those things is true, anyway. Obviously they decided to share the amenities sign but never updated the title. Regardless of that, it was about 5:15 when I got here, and I didn't feel like paying $100 for a hotel, plus I had actual tailwinds to look forward to...so I kept on going. Good choice, as I made it almost 30 miles in about 2 hours despite most of it being slightly uphill.

I did stop at another rest area along the way and got treated to some nice wildflowers: 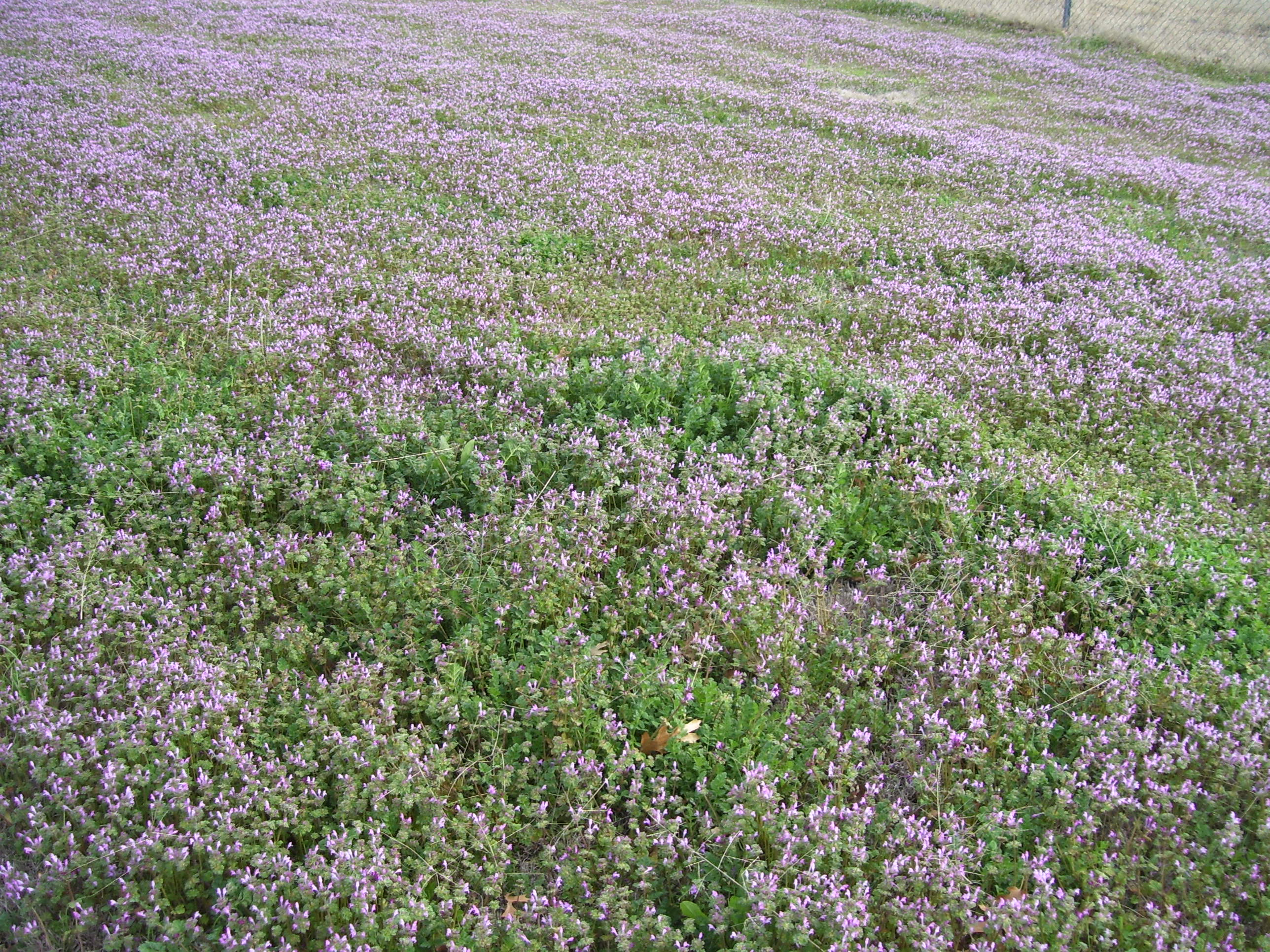 A few spectators showed up to cheer me on... 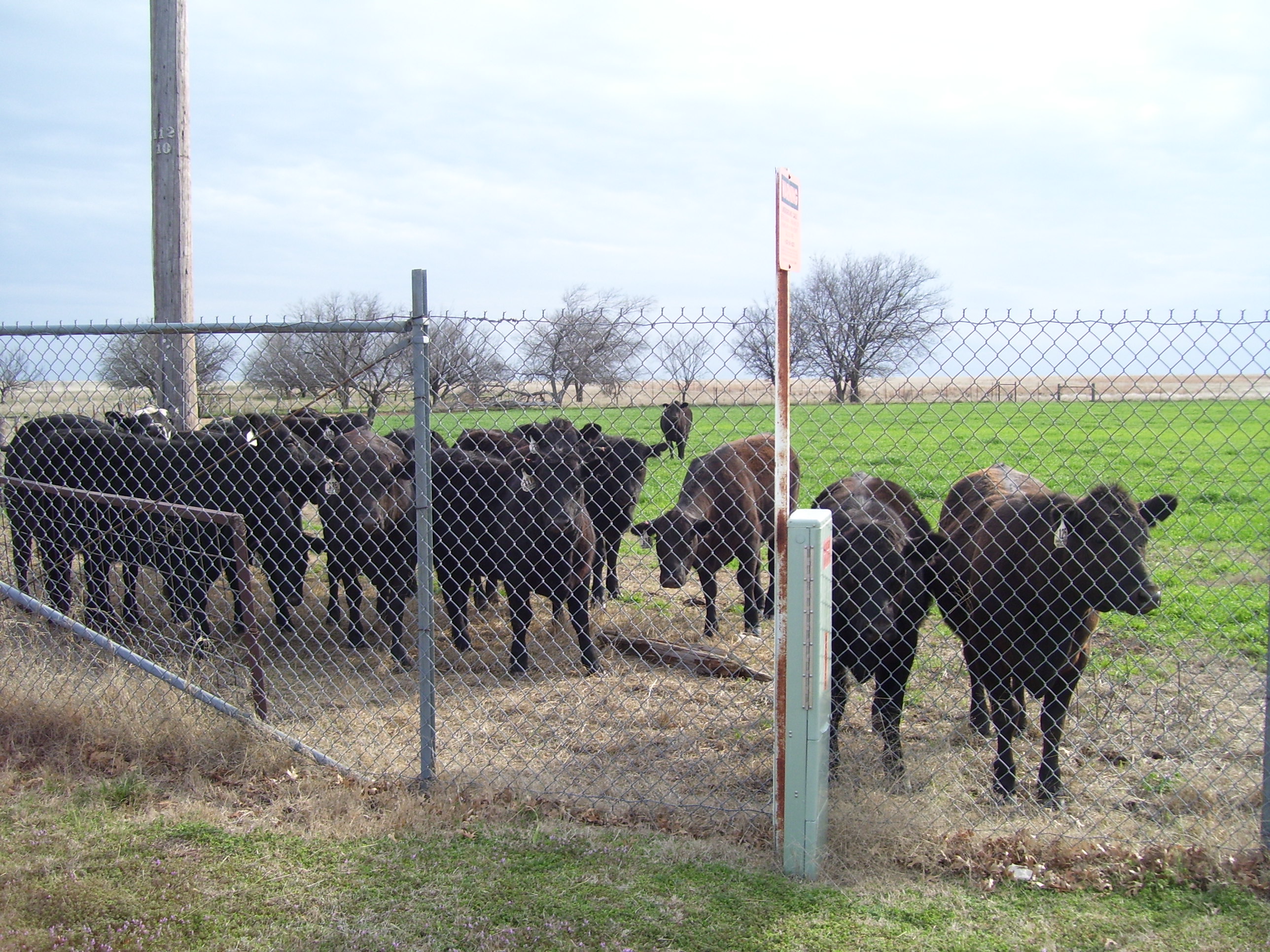 Finally I reached Bowie right around 7:30, with just enough light left to find a hotel ($45) and dinner (fried catfish tonight, yum). Tomorrow it's likely to rain in the morning, so I'll probably get a slow start, but the plan is to ride along the northern fringes of the Dallas/Ft. Worth area. Winds are likely to be light and won't affect much, in theory at least.