I thought about doing a totally off the wall April Fools Day post today...either a simple one saying that I quit (with only a few days left to go), or a really elaborate post about how I got this super south wind and decided to just forget about Charleston and ride straight home to Ohio. Then I realized that might be funny today, but anyone reading this blog weeks or months later just won't get it. So I guess I'll just do a standard page with no April Fools pranks. None at all. Seriously, I mean it!

What got me started thinking about the riding straight home to Ohio joke was this sign, which I saw this morning as I left my hotel. This is the entrance to I-75, which runs right through Dayton (over 500 miles north of here). If I had a car, I could be there in a day without ever leaving this highway. But no, the east coast calls, and I must continue on...not much further now. The faint northwest winds helped me out a little bit, but mostly didn't do much (except when I went north, when it felt like they were a lot stronger). Again, much like yesterday, I'm just glad they weren't headwinds. Oh, and the clouds there were gone within an hour or so, giving me clear skies most of the day. 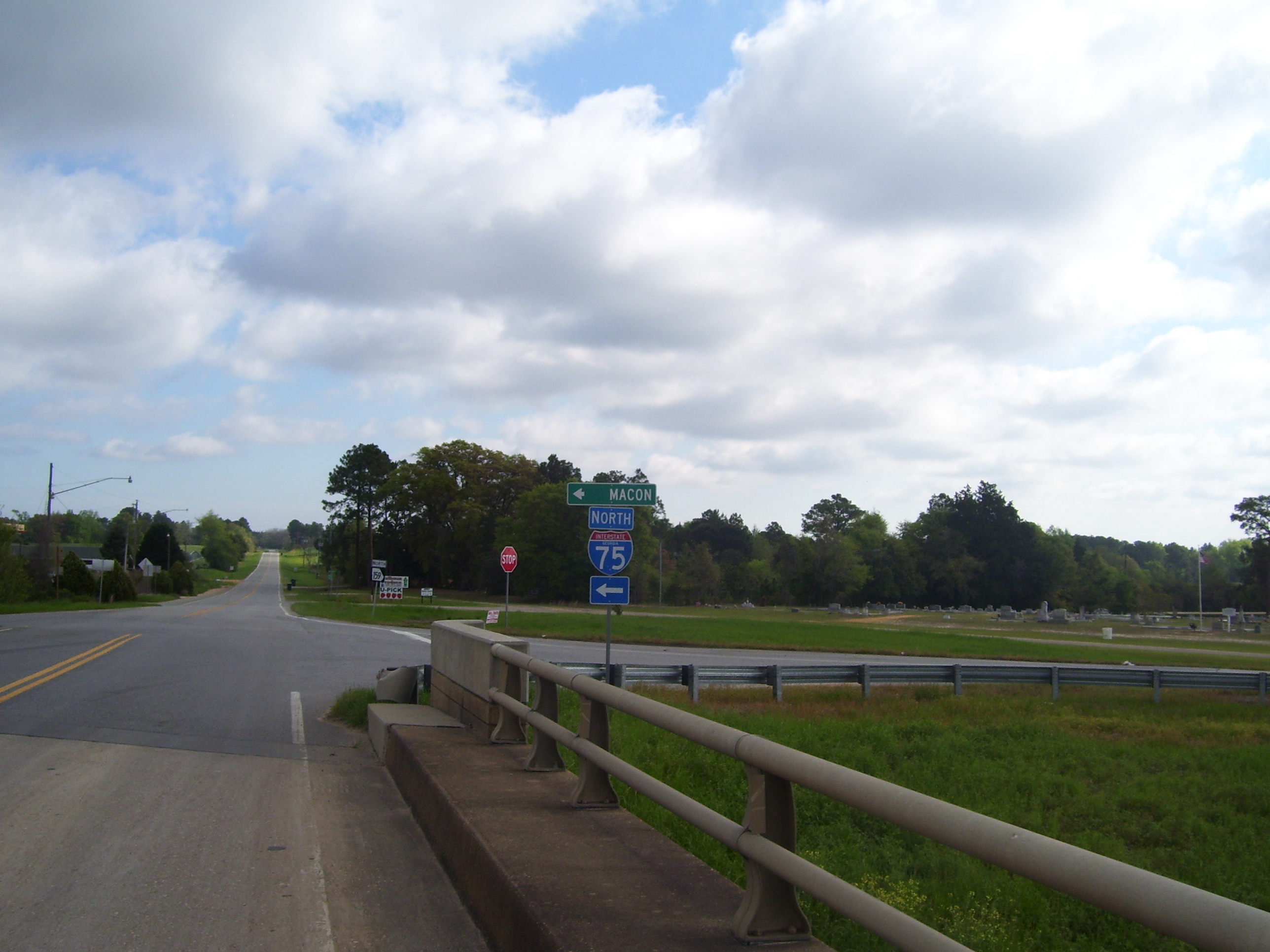 I stayed away from major roads, sticking to Georgia byways today, which had the typical lack of shoulder, but also a noticeable lack of traffic. Here's a typical image of what things looked like...mostly just trees, some open areas and farms. Every now and then there'd be a patch of marsh or swamp, but not too much. 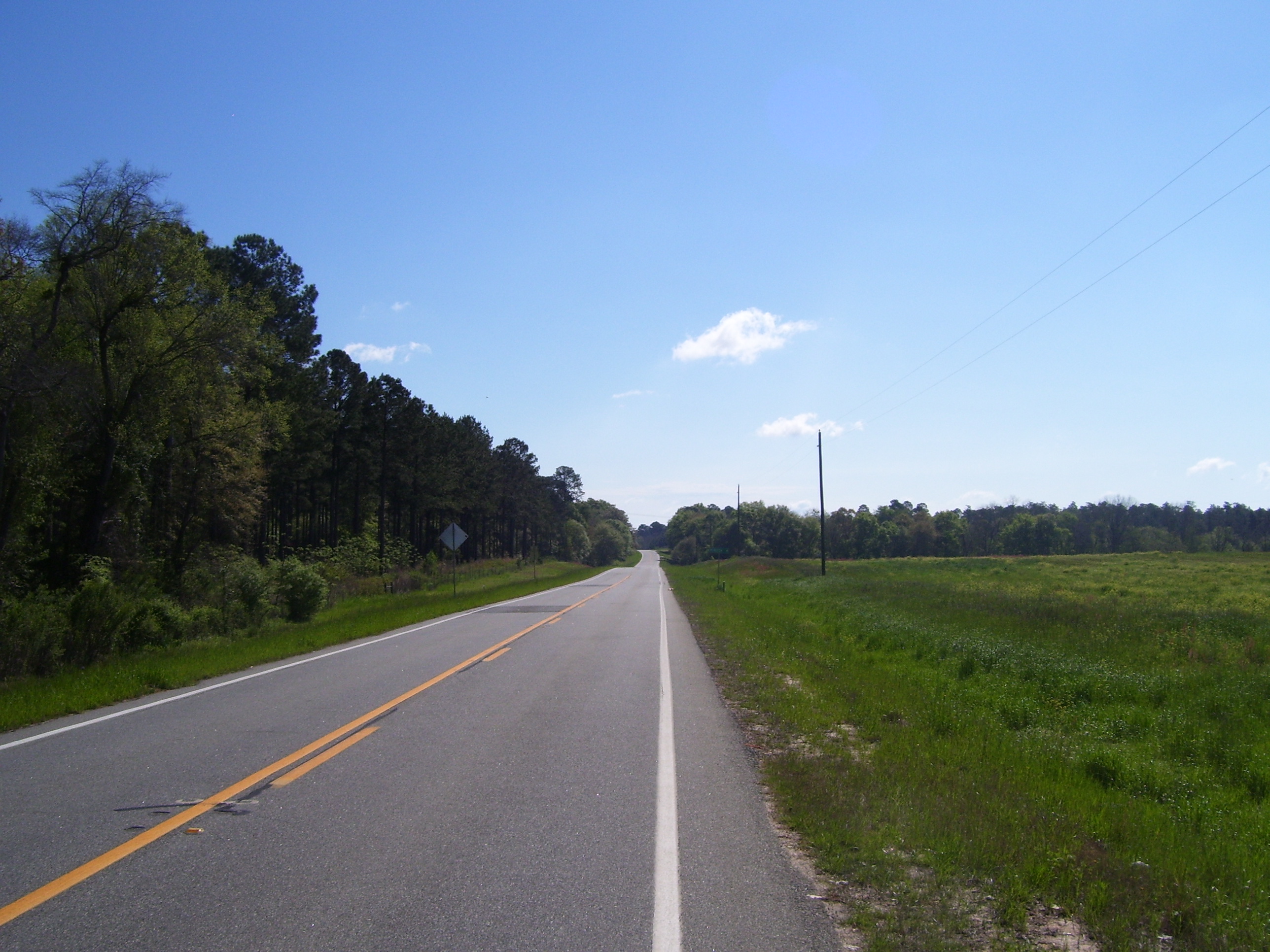 Here are a couple of shots of random terrain. The first is a lake surrounded by trees that look suspiciously regularly spaced, and therefore are going to be harvested one of these days. I did see the occasional logging truck, so this must go on from time to time in this area. 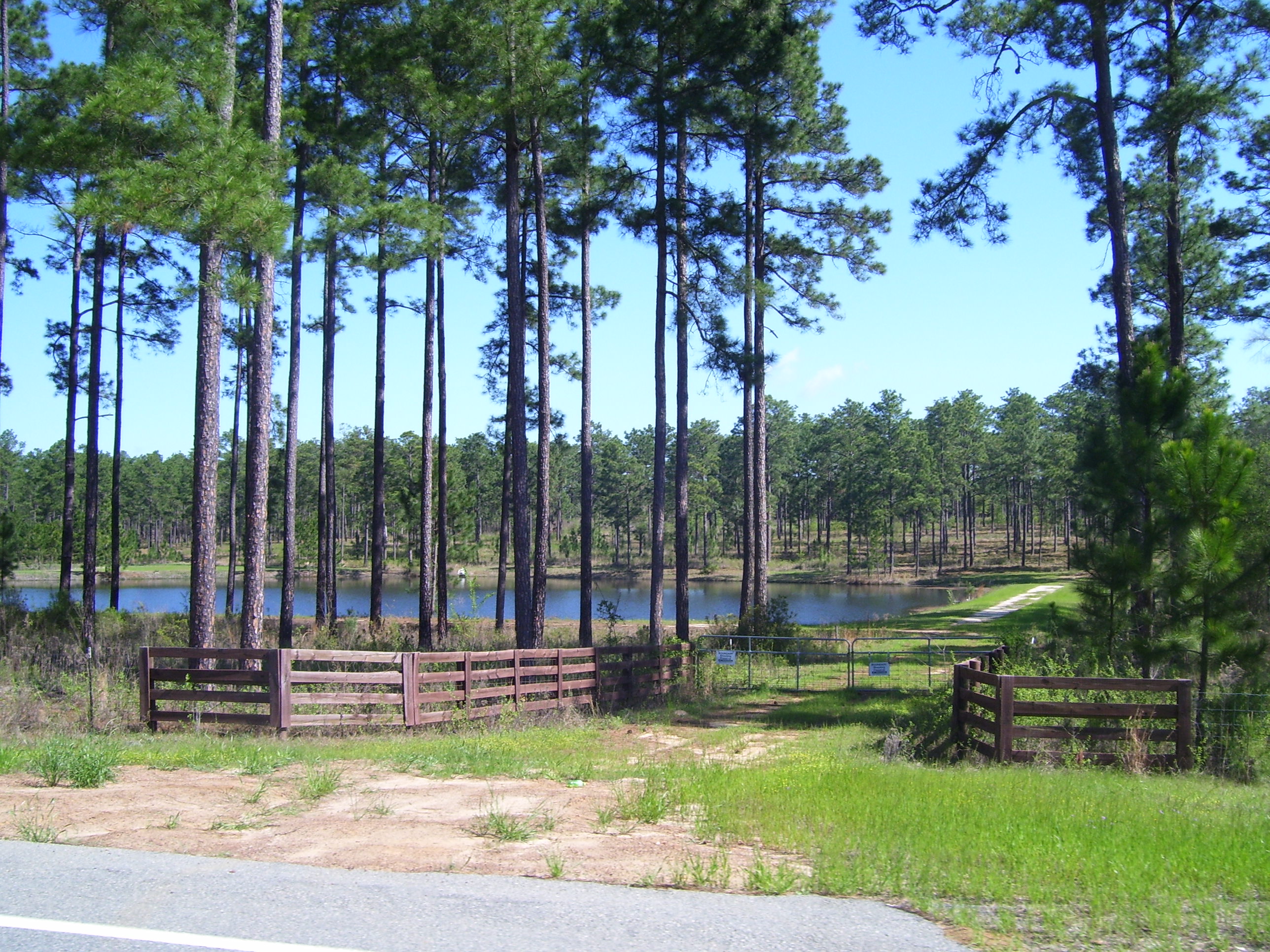 One of the many farms I passed today. Too early to tell what crops are growing in most places, but I suspect a lot of them are peanuts. 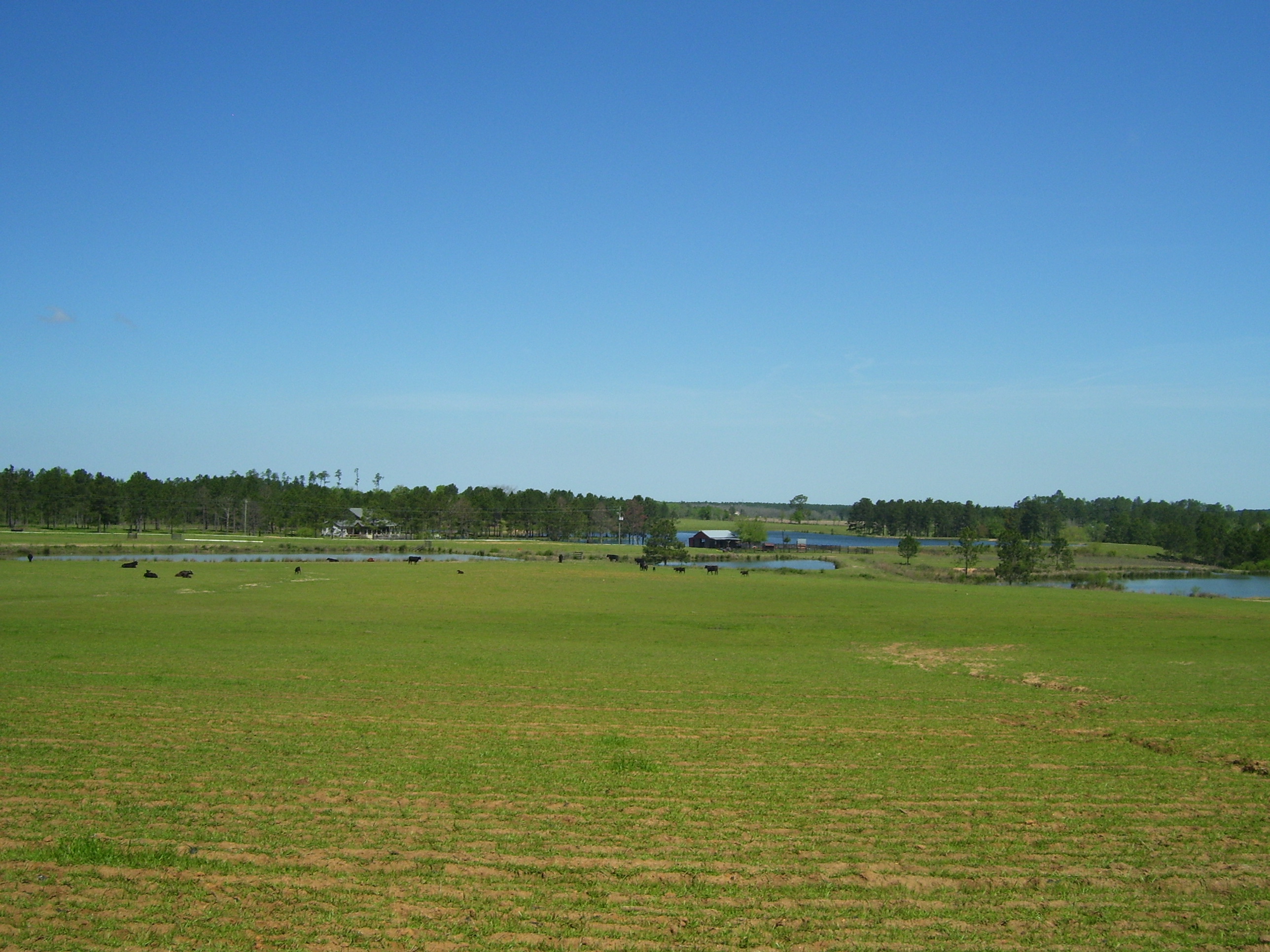 Today's random historical marker comes from in front of the Wilcox County courthouse, in the town of Abbeville. 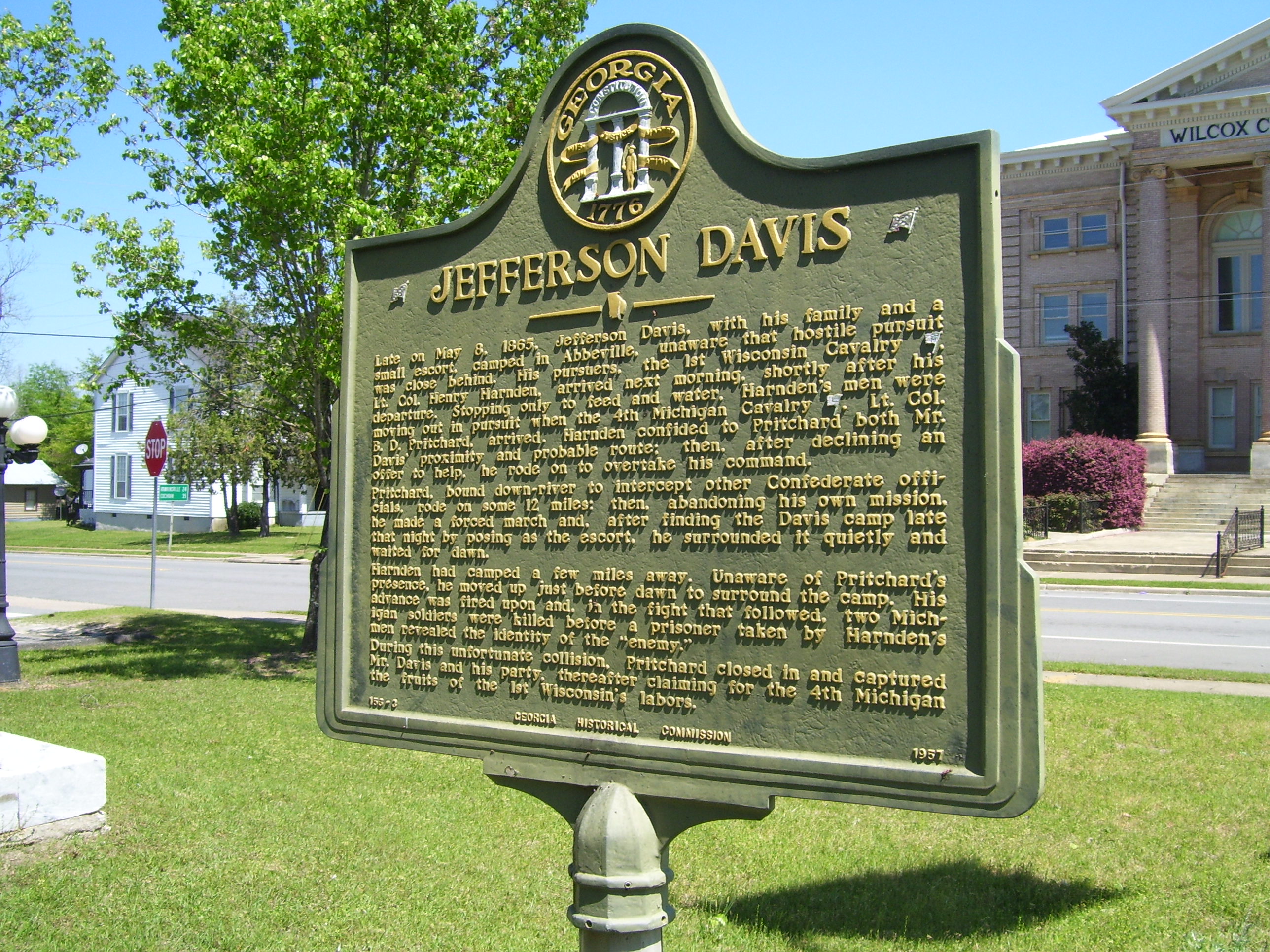 Speaking of that courthouse...here it is... 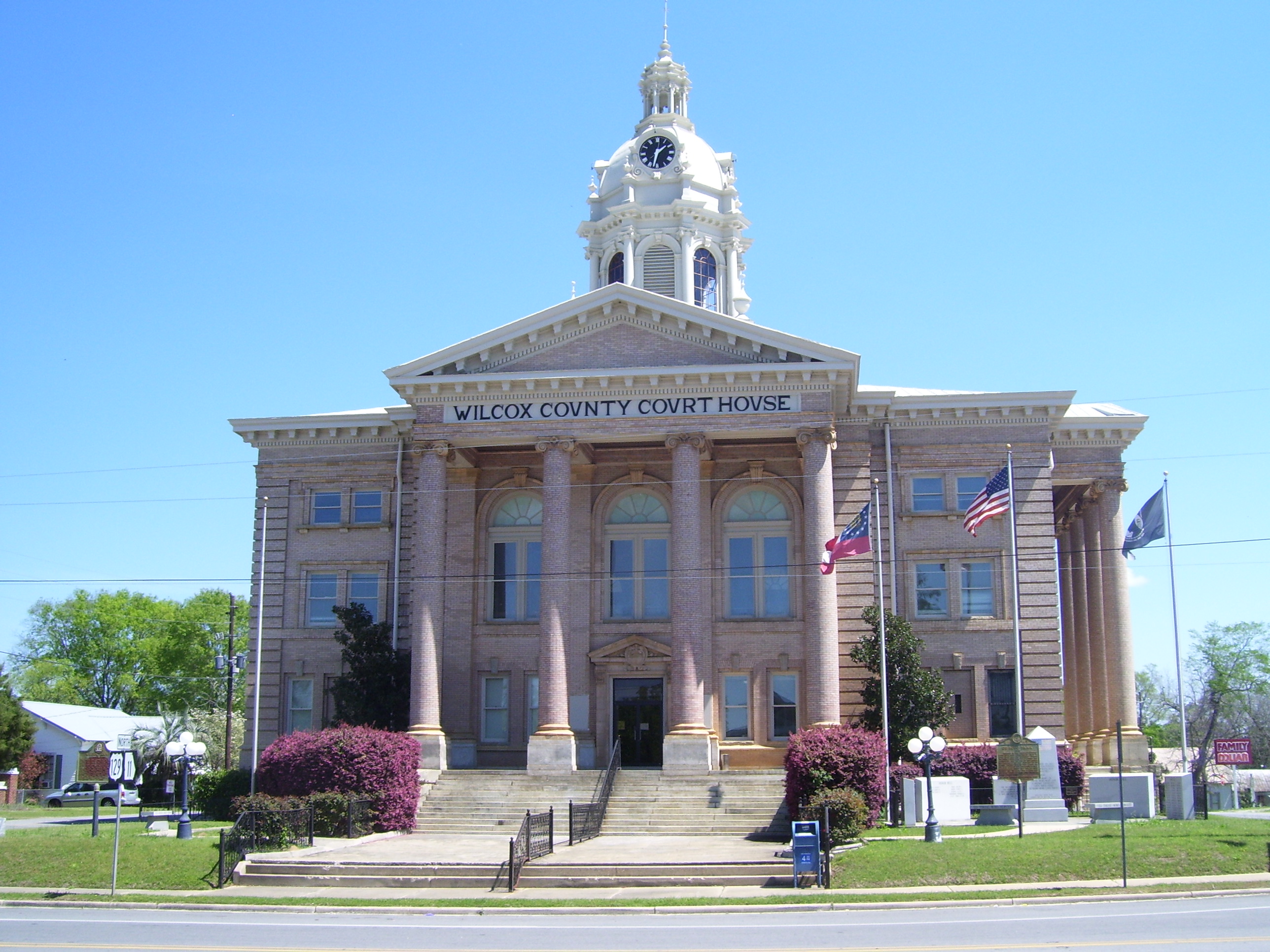 I found a Subway in town and had some lunch, then moved on, making pretty good time thanks to the lack of any winds impeding my progress. The town of McRae was my first stopping option, at about 65 miles out, but it was only 4pm (with sunset at 8) and Mt Vernon was only 20 miles farther. That still left me plenty of light to make a side trip to the Little Okmulgee State Park, located along the lake of the same name. Here's a view of said lake: 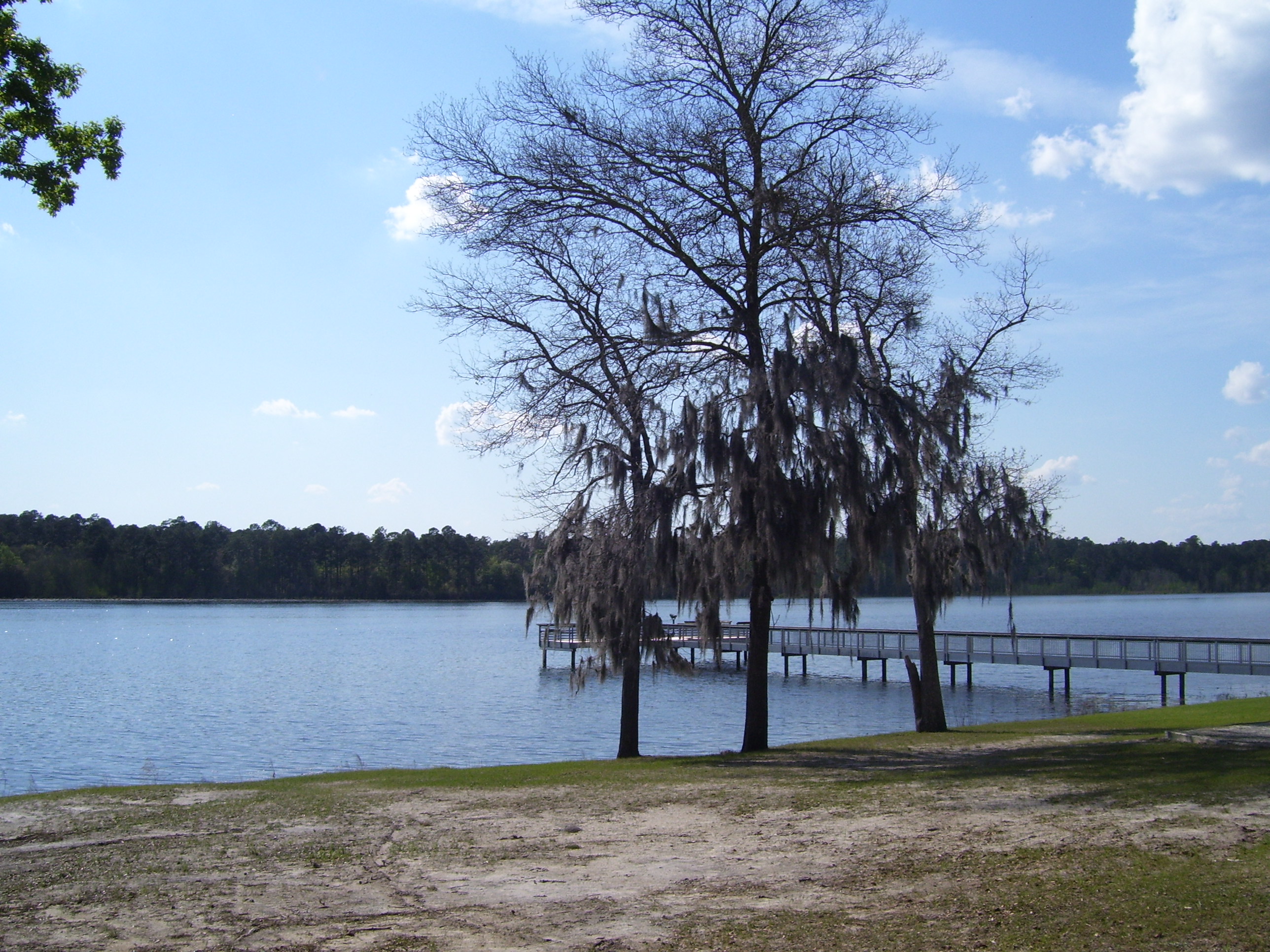 The park had tons of camping (and lots of RVs) plus a few people out on the water in boats, but otherwise it wasn't terribly crowded. Of course I was here for a couple of geocaches, in addition to the scenery. A nearby nature trail had a few more caches, but I figured it would be closed to bikes, so I didn't intend to do that part. However, much to my surprise, bicycles were actually allowed (they just had to go slow and yield to hikers). Since the path surface was either gravel or sand, I didn't intend to go very fast anyway, so I didn't mind that. Plus I still had that hour of extra light, so on I went. Here's a sample of the path...not too bad, really. 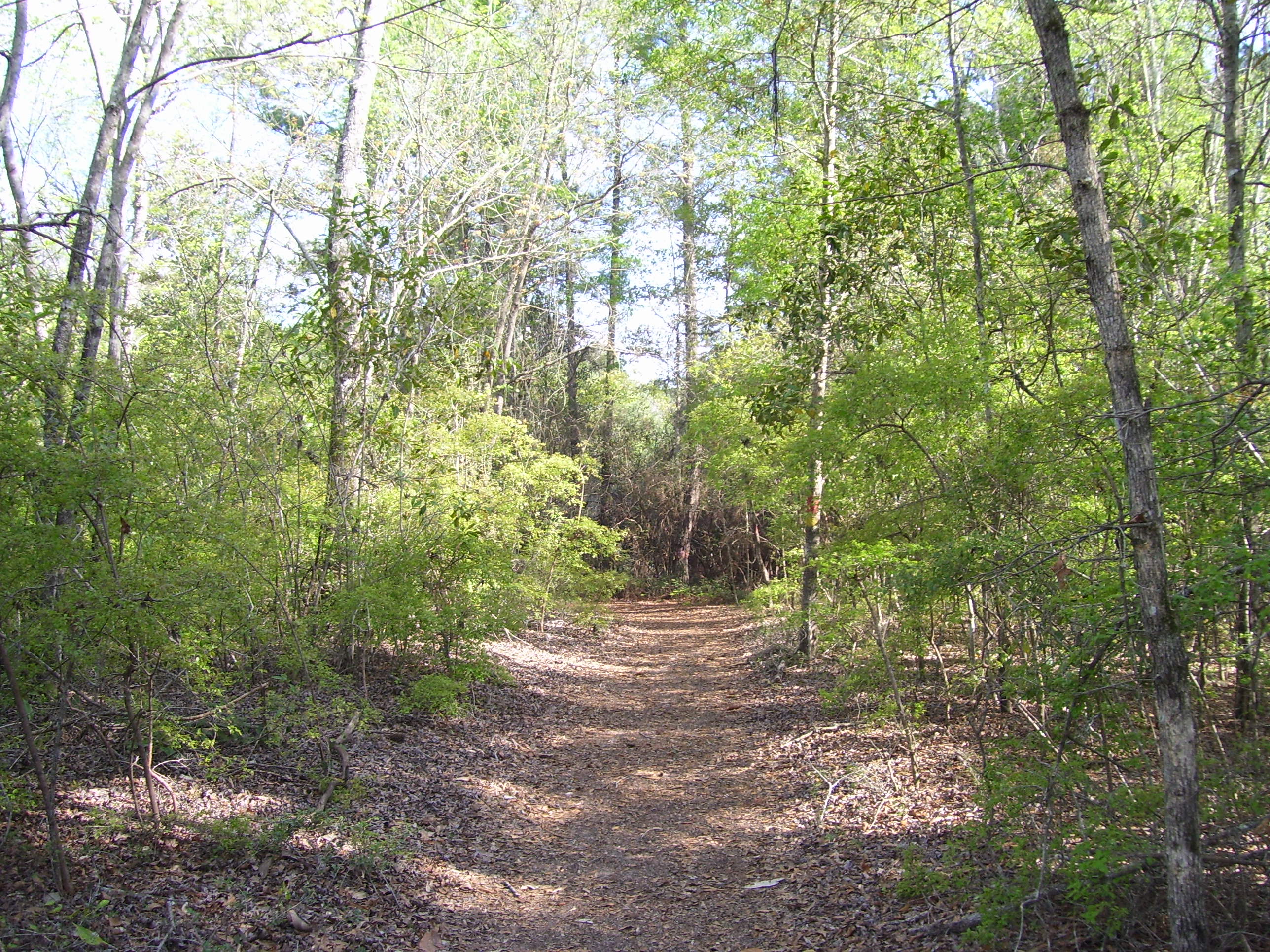 Here's a nice view of the lake from one of the many benches placed along the trail. It's early enough in the year that the mosquitoes aren't out yet, either. I didn't get a single bite. I suspect later on you'd definitely want to bring bug spray back in here. 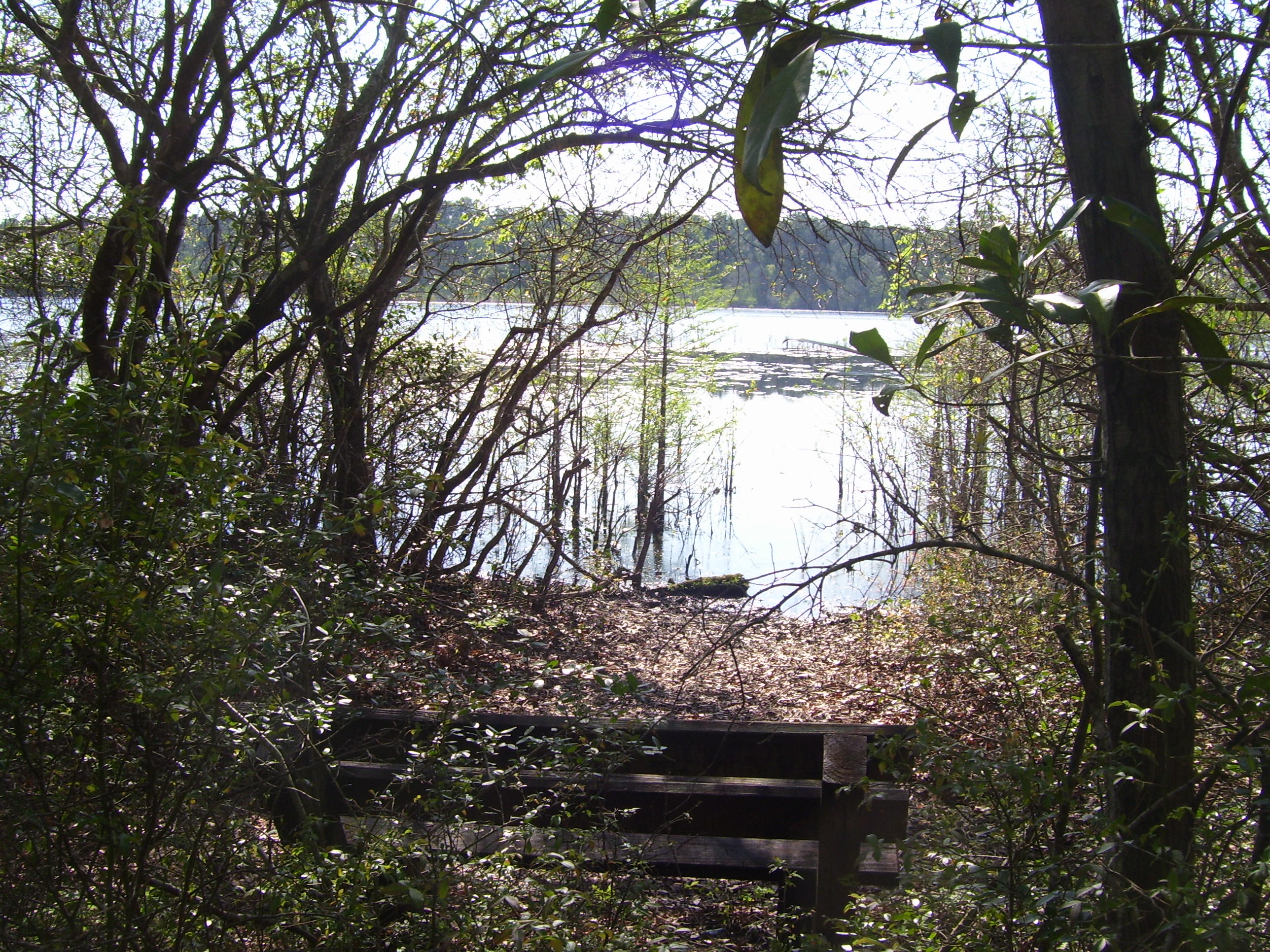 The path wound through some swampy areas, but never low enough that I got my feet wet. 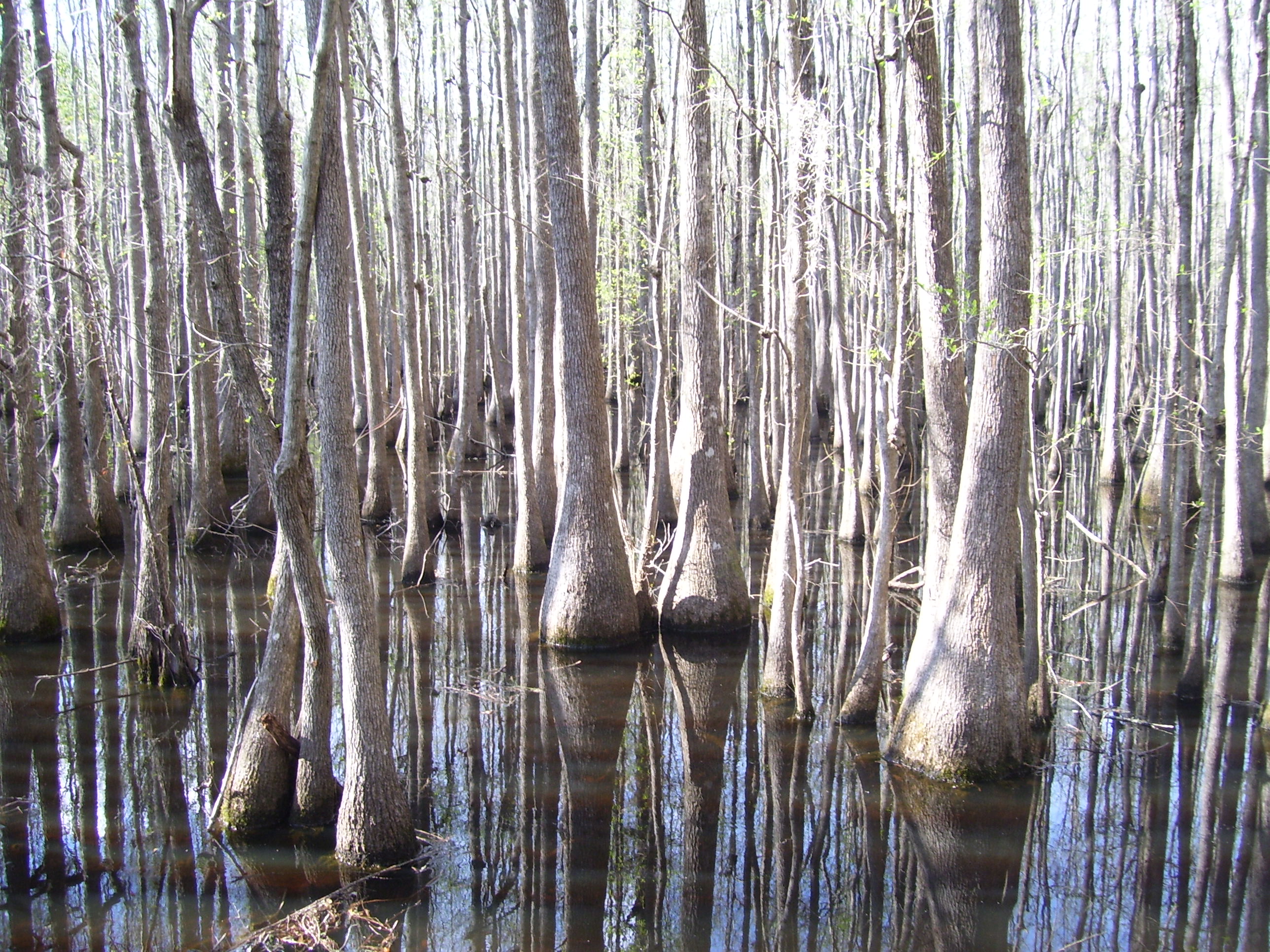 This particular section had a raised boardwalk you could walk out on to view birds and other wildlife. The water below teemed with fish, although I didn't see any turtles or anything else interesting. I did notice a sign warning about alligators, but never saw any of those, either. 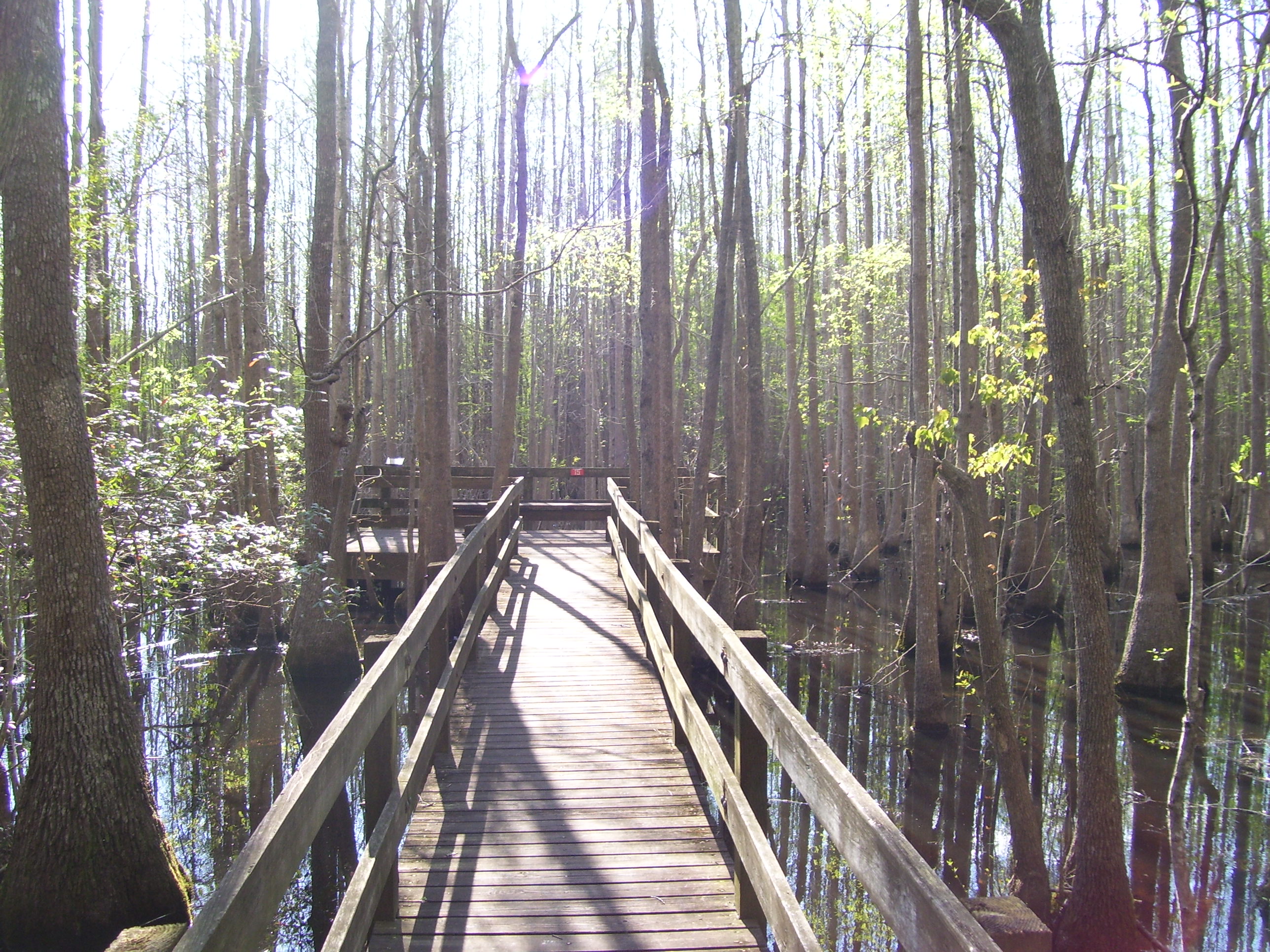 Another classic Georgia sight. Hmm...that sun's starting to get a little low...I should probably head back out to the road. 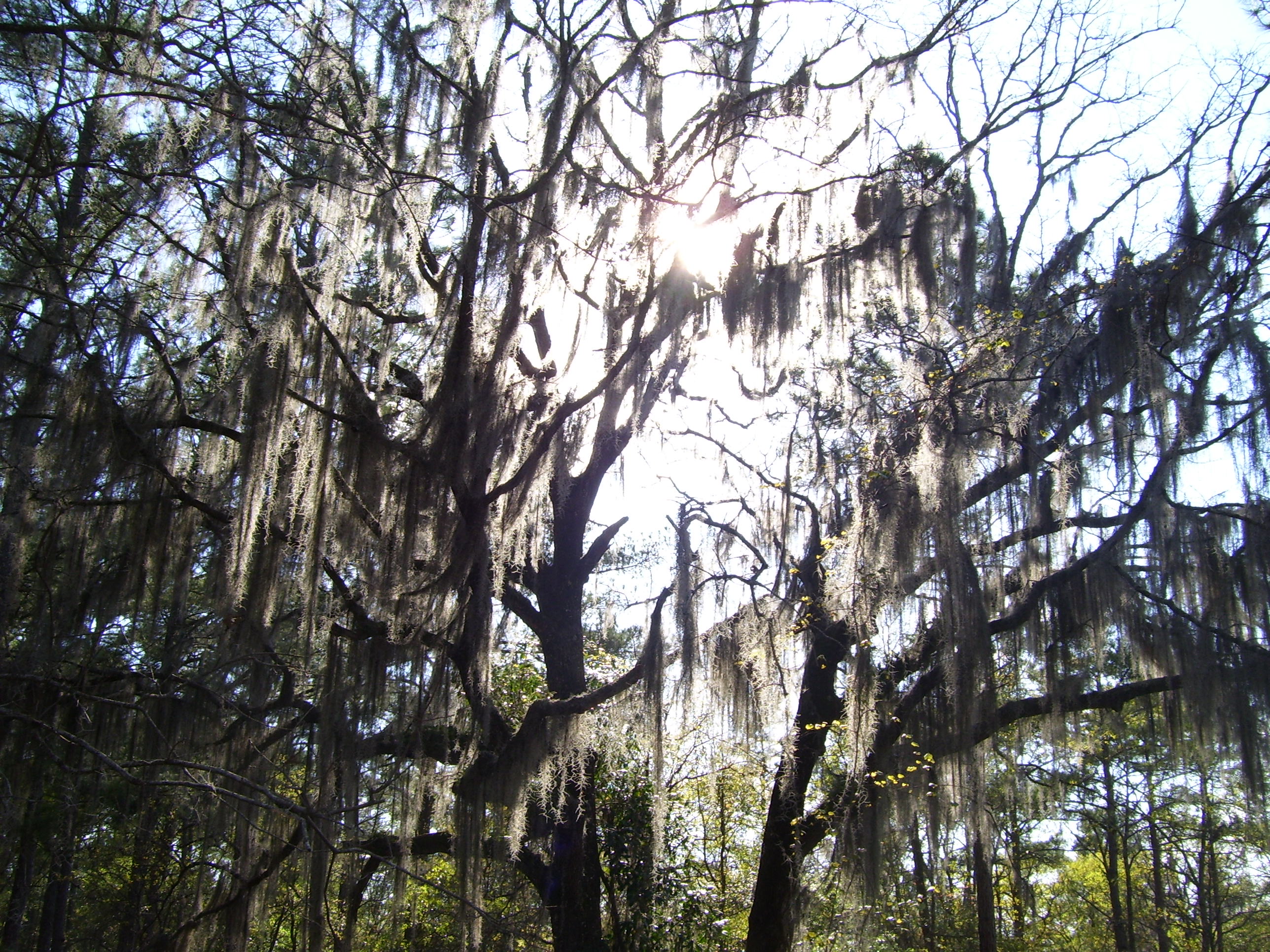 Once out of the park the road to Mt Vernon was fairly easy. The winds were shut off for the night, so I just cruised along at an easy pace, not minding the occasional hill to get me up out of the saddle, and then some coasting afterward. In fact I didn't even stop the bike for the last 22 miles of the day. I did snap one more photo of a river I crossed over just a couple miles from town, with the sun setting almost directly behind me. 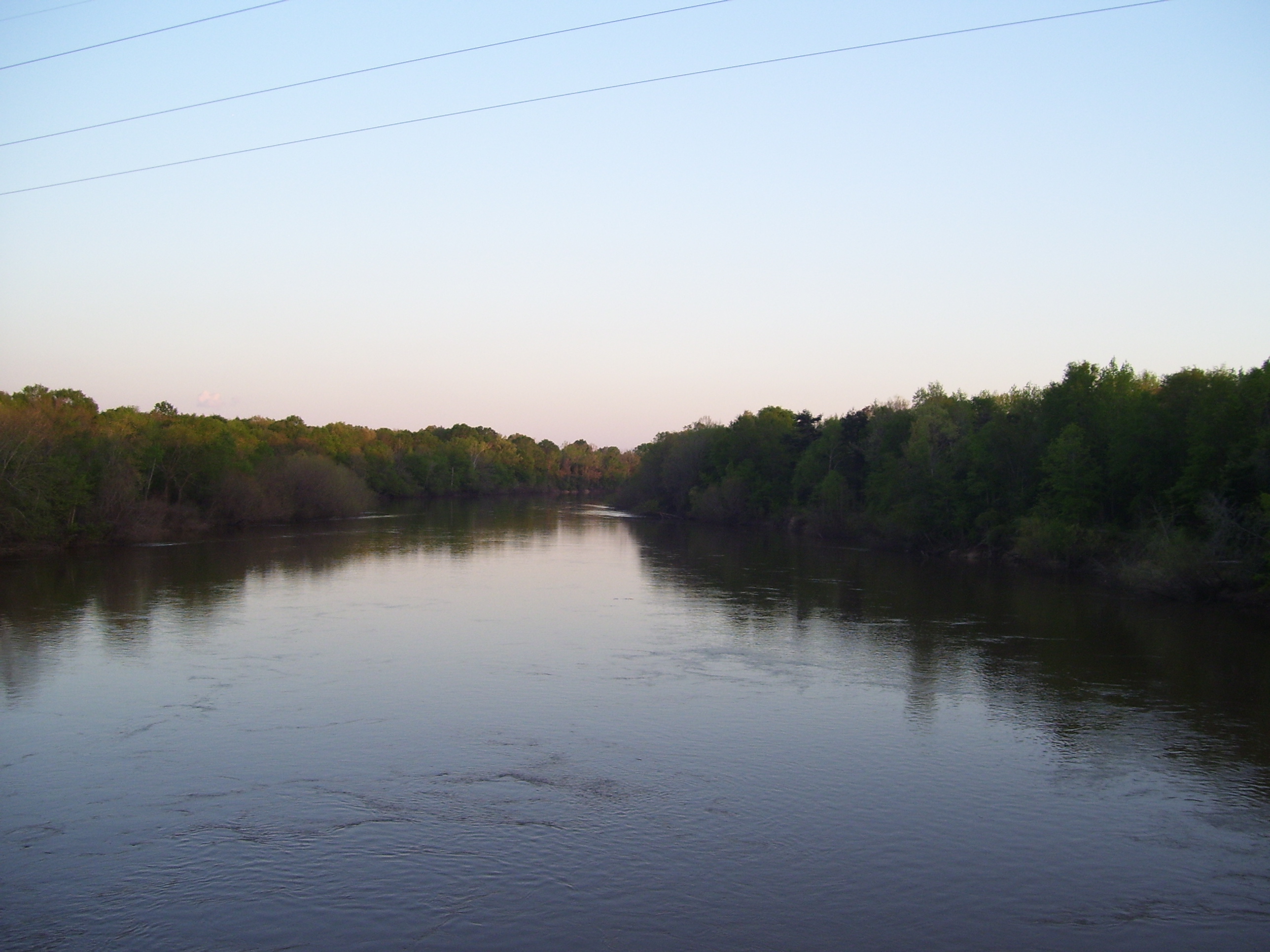 Mt Vernon has only one hotel, and I hadn't made a reservation and didn't know the prices, so when I arrived I had no idea what would happen. If the price had been too high or they had no rooms, I could've continued on to Vidalia, another 12 miles ahead, but it would've been almost completely in the dark. I could've done it, at least physically (I'm not all that tired, really), and in fact the cooler evening air might've been pretty refreshing, but I'd like to avoid riding after sunset if I can. As it turns out, the price was only $42 and they had a Chinese place and a dollar store right across the street. Perfect.

And so ends my fifth straight week of riding!