Three days to go, now...with that in mind the focus has shifted from daily ride options to more fixed ending points. Looking ahead to tomorrow night, there's really only one good choice for stopping prior to the final run to Charleston, and that hotel is about 70 miles away from the finish. So that means there's really no reason to rush things today or try to do another century or anything like that. Instead, the best choice is to just do 65-70 miles each of the next 3 days and not try to overdo it at the eleventh hour. I suppose if I had miracle tailwinds I could've gone for a double century and finished in two days, but the weather forecast showed more east winds today (sigh) so that's just not happening. With any luck I might get a tailwind tomorrow, but we'll worry about that when it happens. Instead, I had to face the grim reality of more headwinds today as well as a chance of thunderstorms throughout the afternoon (another reason to not try pushing the miles).

Once again the fortune cookie from last night's meal gave me a bit of encouragement: 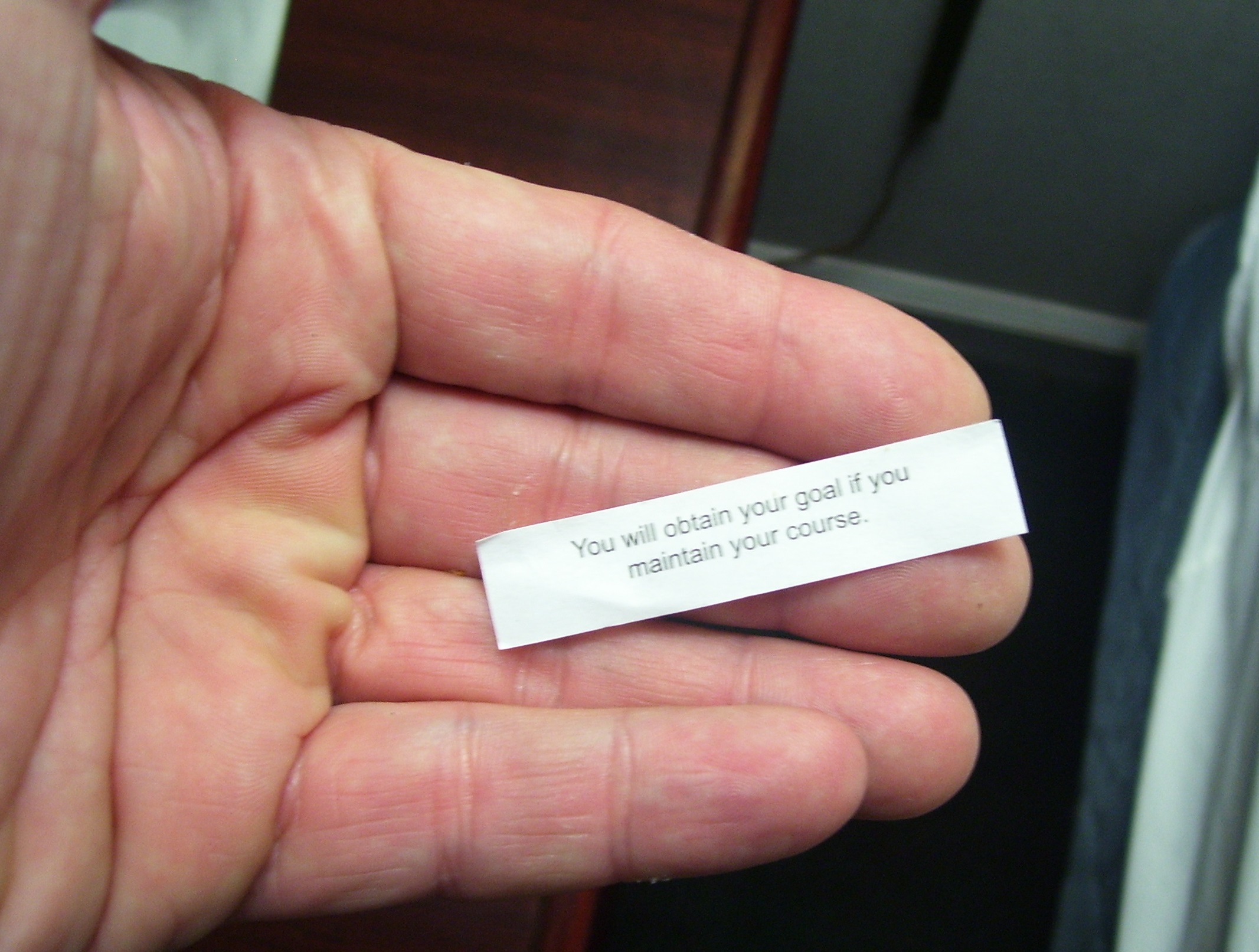 I set off just before 10am (I still haven't adapted to Eastern Time) and got a steady diet of hills like this one for the first couple of hours. The sky stayed cloudy like that most of the day and the winds came out of the southeast. Despite the trees to my right, the wind persisted most of the time, slowing me down and making the trip much less fun than previous days. At least there wasn't much traffic. 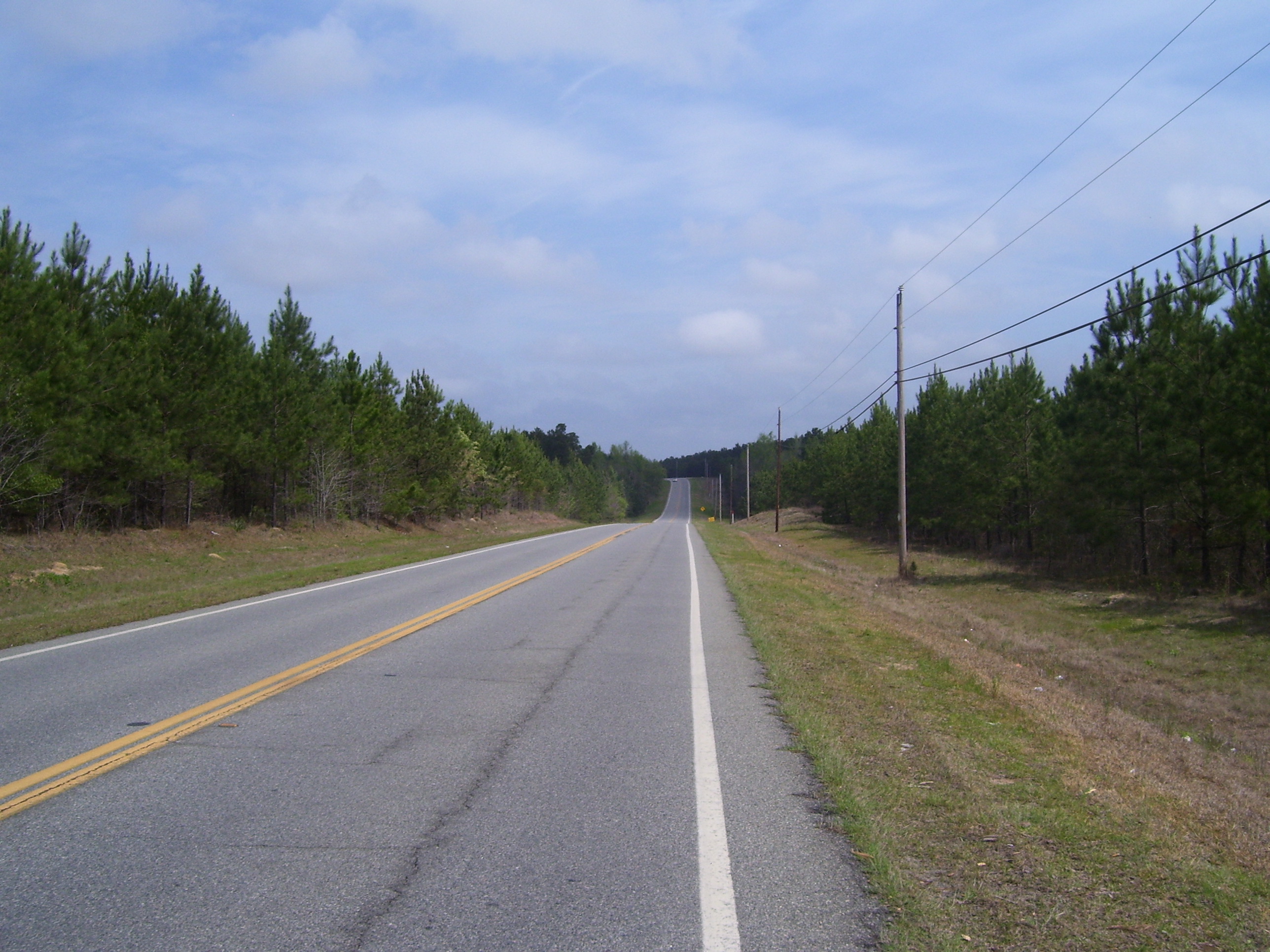 After a while I turned north, taking one of two possible routes to get to Statesboro, mostly just to enjoy an hour or so without that headwind. The road was almost deserted...here's a photo looking ahead about a mile to a steep hill way up there, and not a car to be seen. 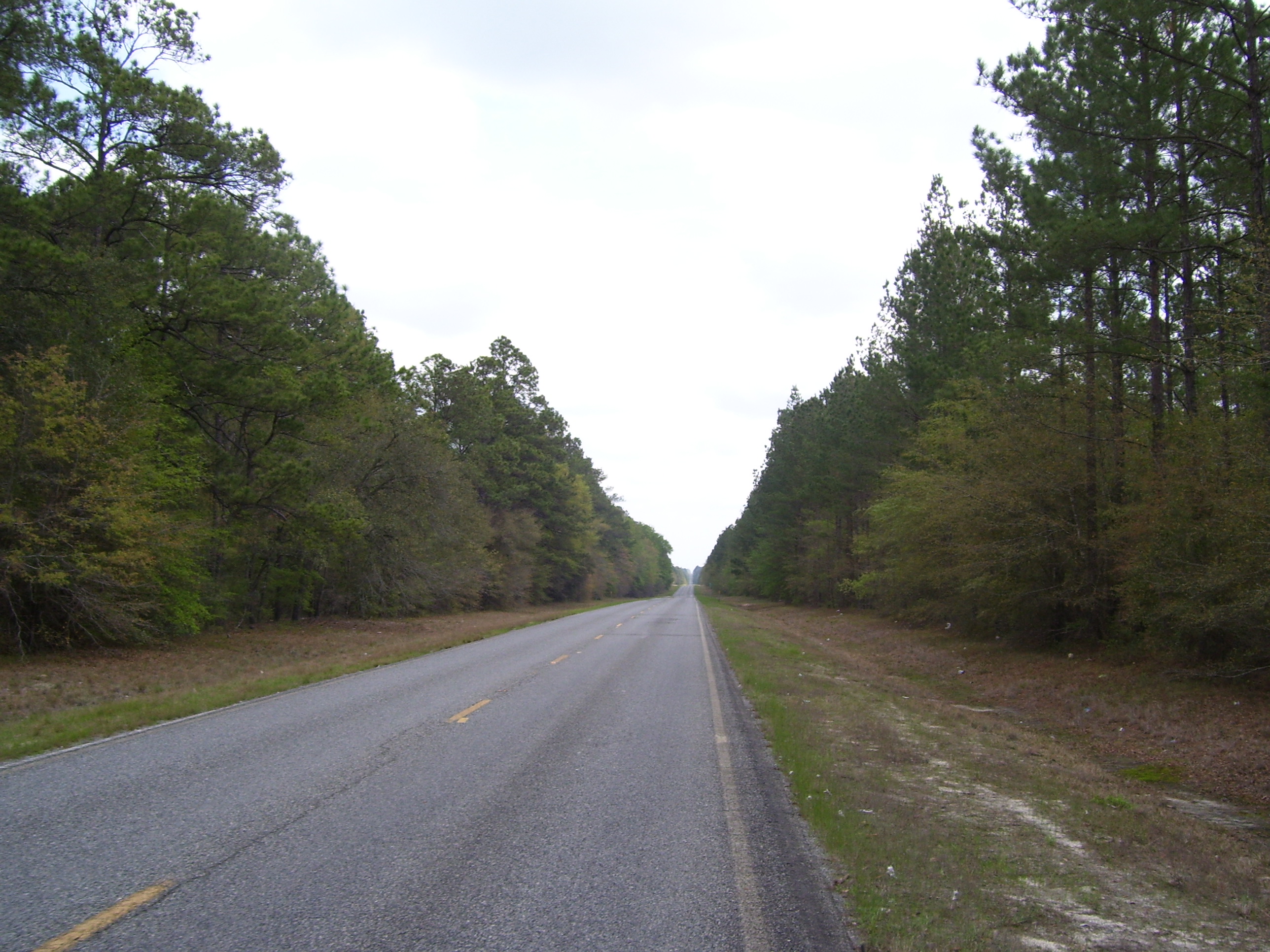 I know I post a lot of river pictures, but the roads also cross over a great many creeks and streams that rarely get a photo. Here's a random creek crossing, and in this one you can see the recent rains have caused this one to overflow its banks quite a bit. 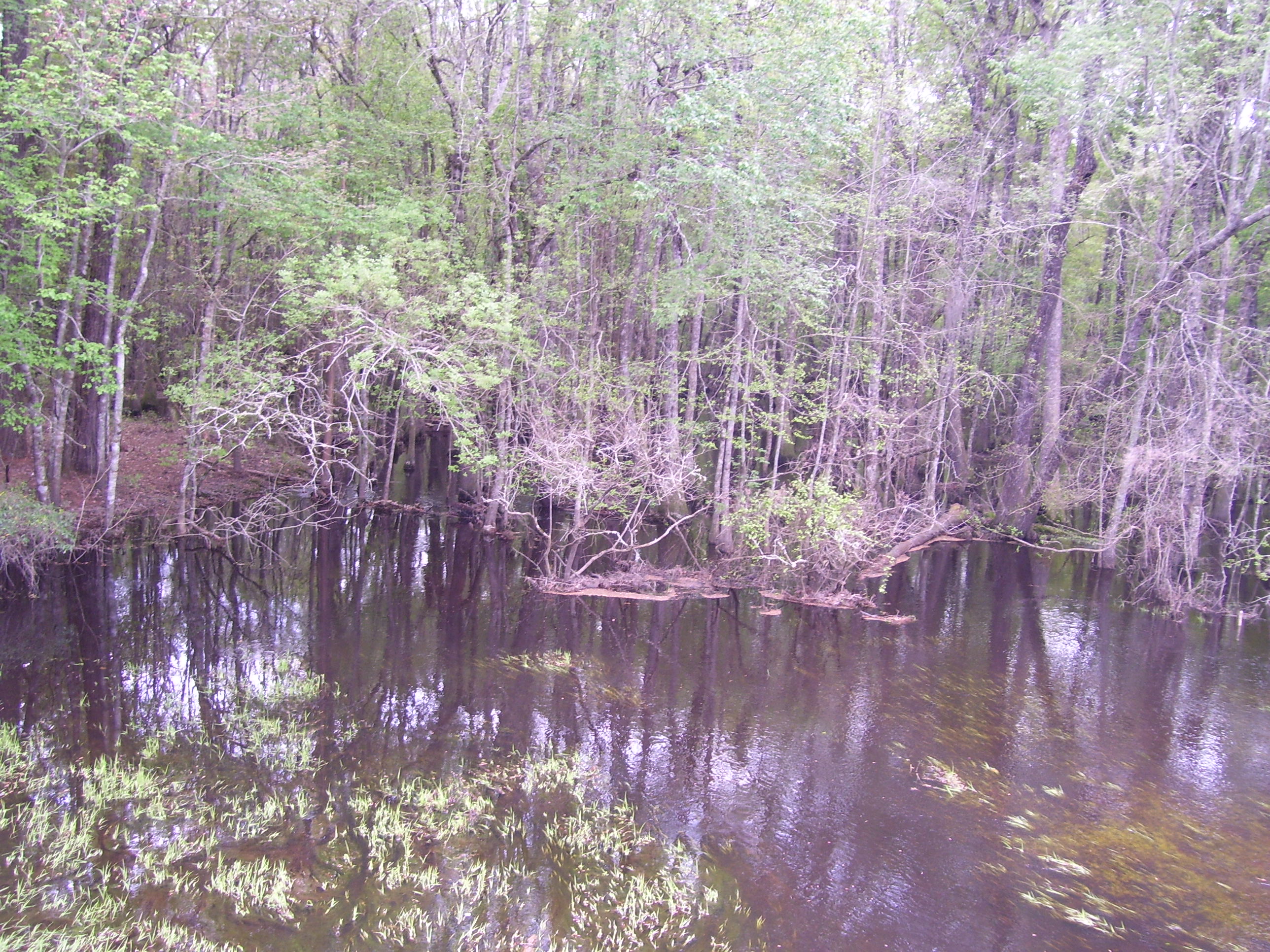 I also post a lot of pictures of nicer houses and estates I pass along the way. I got a chuckle out of this one because it looks like the trees are crowding all around it for some reason. 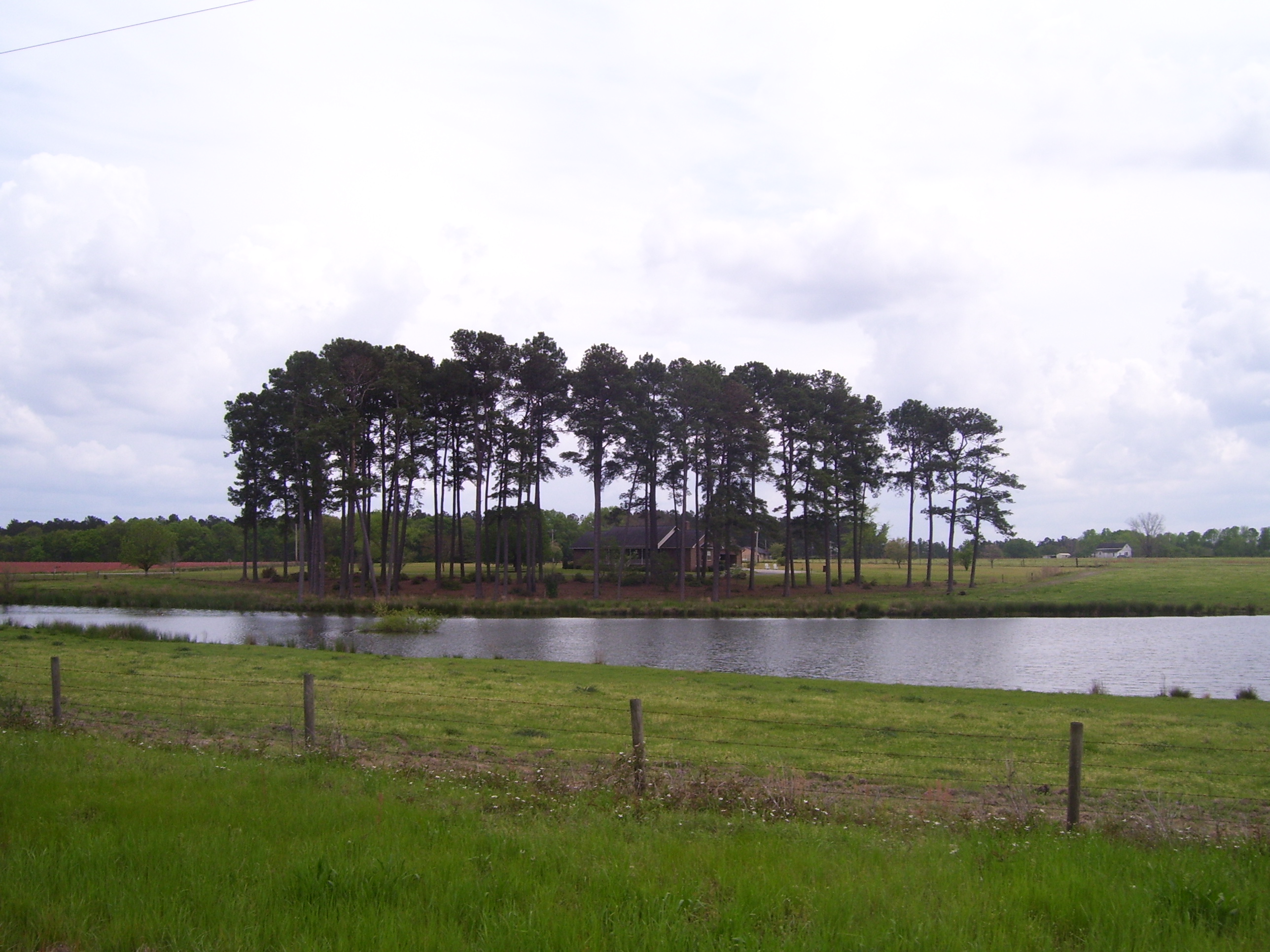 As long as I'm posting more examples of commonly seen things in my daily blog, here's yet another courthouse, and while I'm at it I might as well include today's random historical marker, too. This is in the downtown area of Metter. 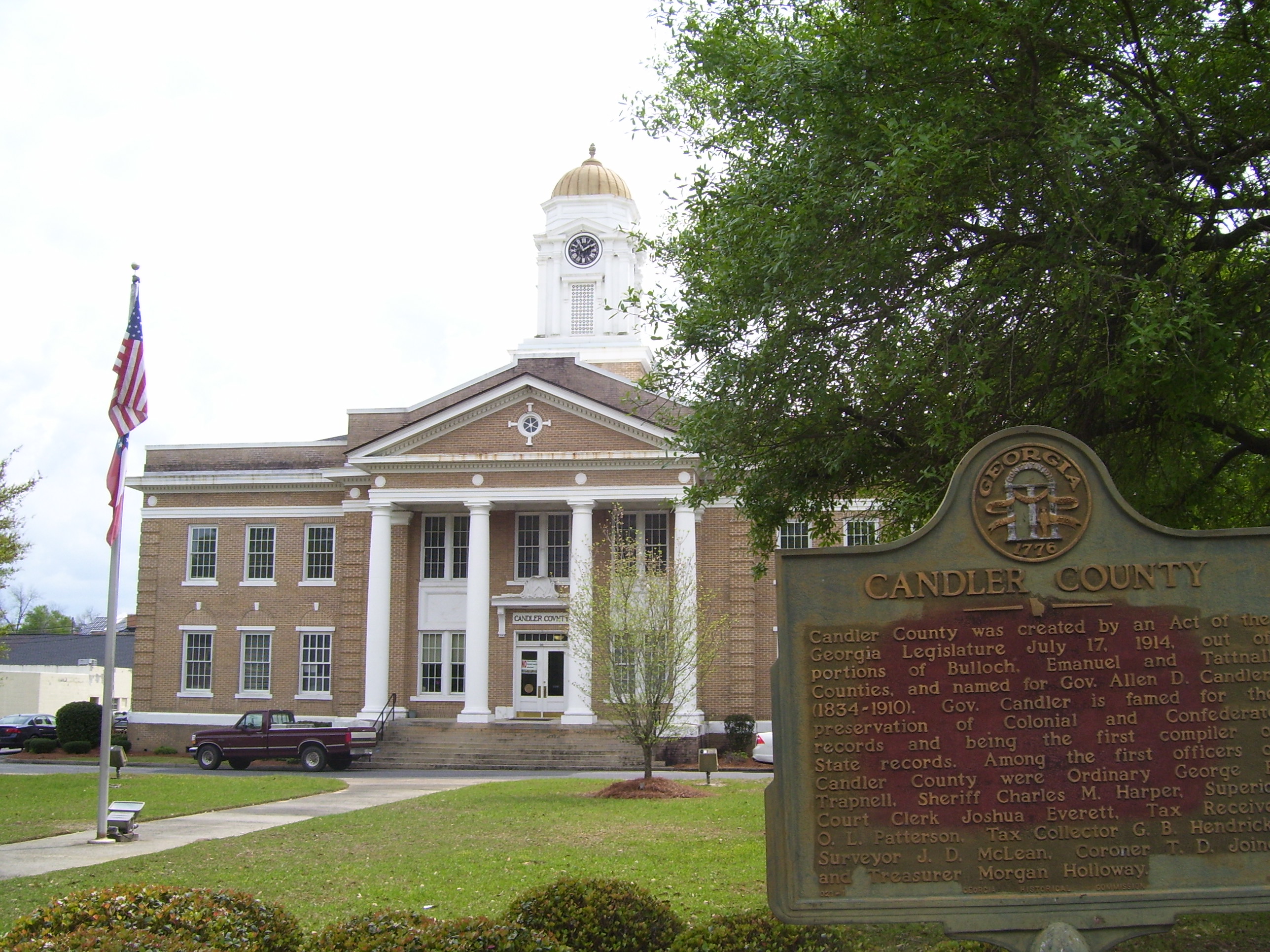 Also in Metter, near the visitor's center, I came to this picturesque lake and took a rest stop at this little park bench. Then I refilled my water and moved on for the last 20 miles or so of today's ride. 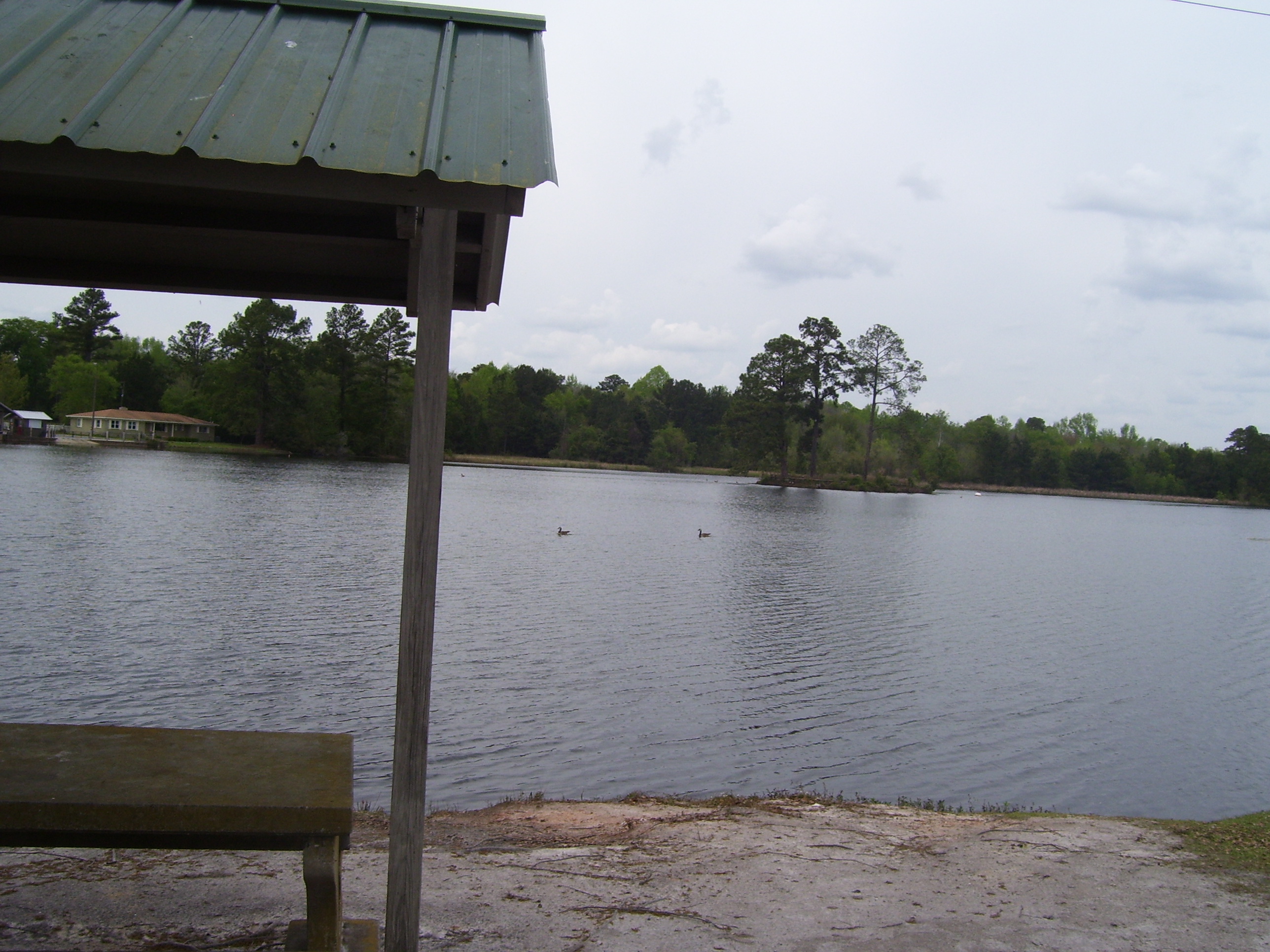 Here's another lake, but zoom in and check out the sign on the tree. Apparently they're really fanatical about that sabbath commandment around here, I guess. 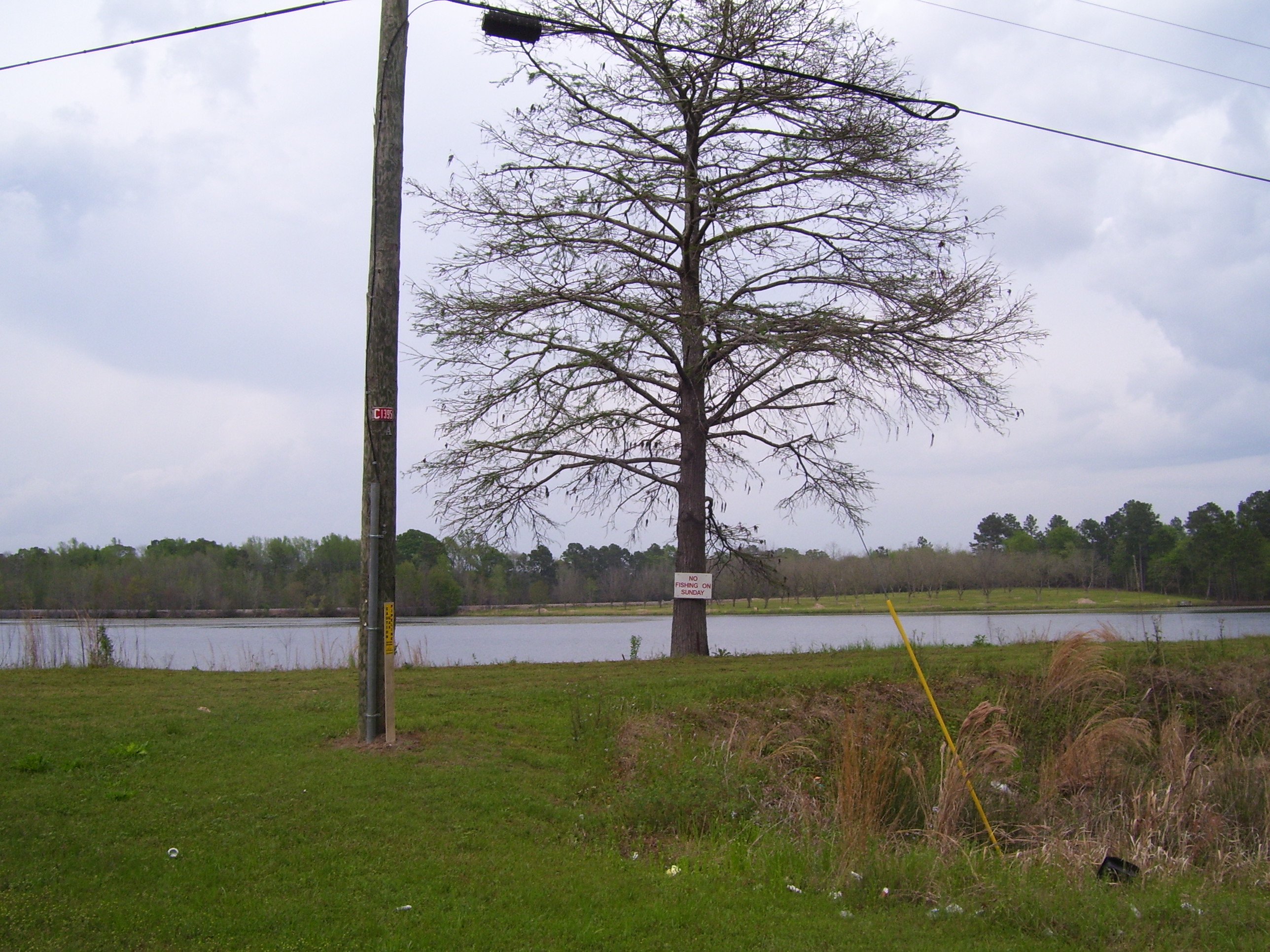 Most of the trees and marsh gave way to wide open farming as I got closer to Statesboro. Here's one of the better looking ones, with some cattle just roaming around freely, a nice lake and a few well-maintained buildings in the background. I usually try to take pictures only of the nice looking stuff, so you never get to see the run-down or overgrown places, or abandoned farms with rusting equipment and caved-in roofs. There's plenty of that, as well, I just don't bother showing it. 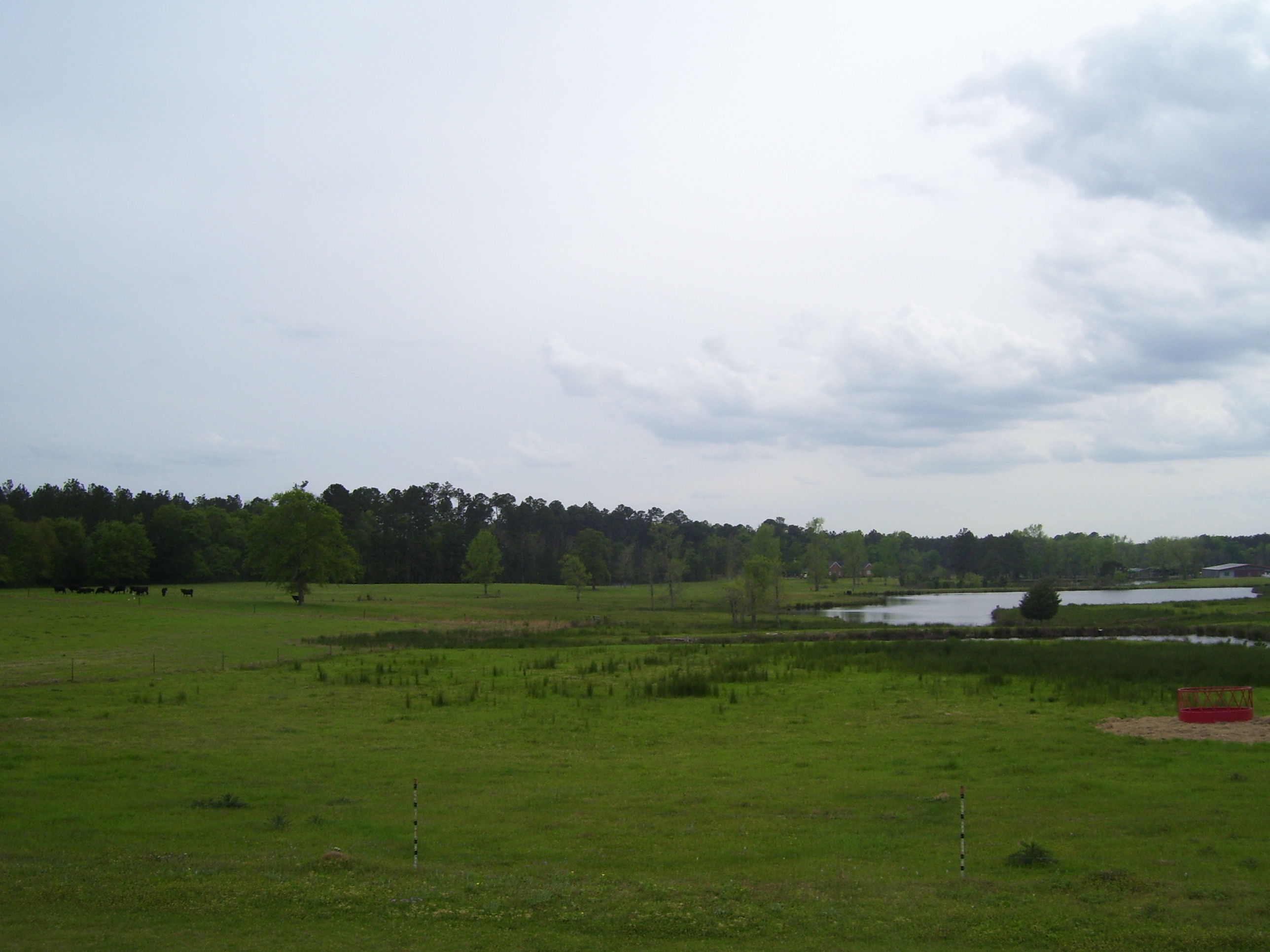 One last break as I got to the small town of Register, which had a very nice little park with a decorative railroad car (lots of towns have places like this, and railroad cars are very common...usually it's a caboose). There's usually nobody around and I can take a rest and relax for a bit after finding the cache (yep, there's one here). 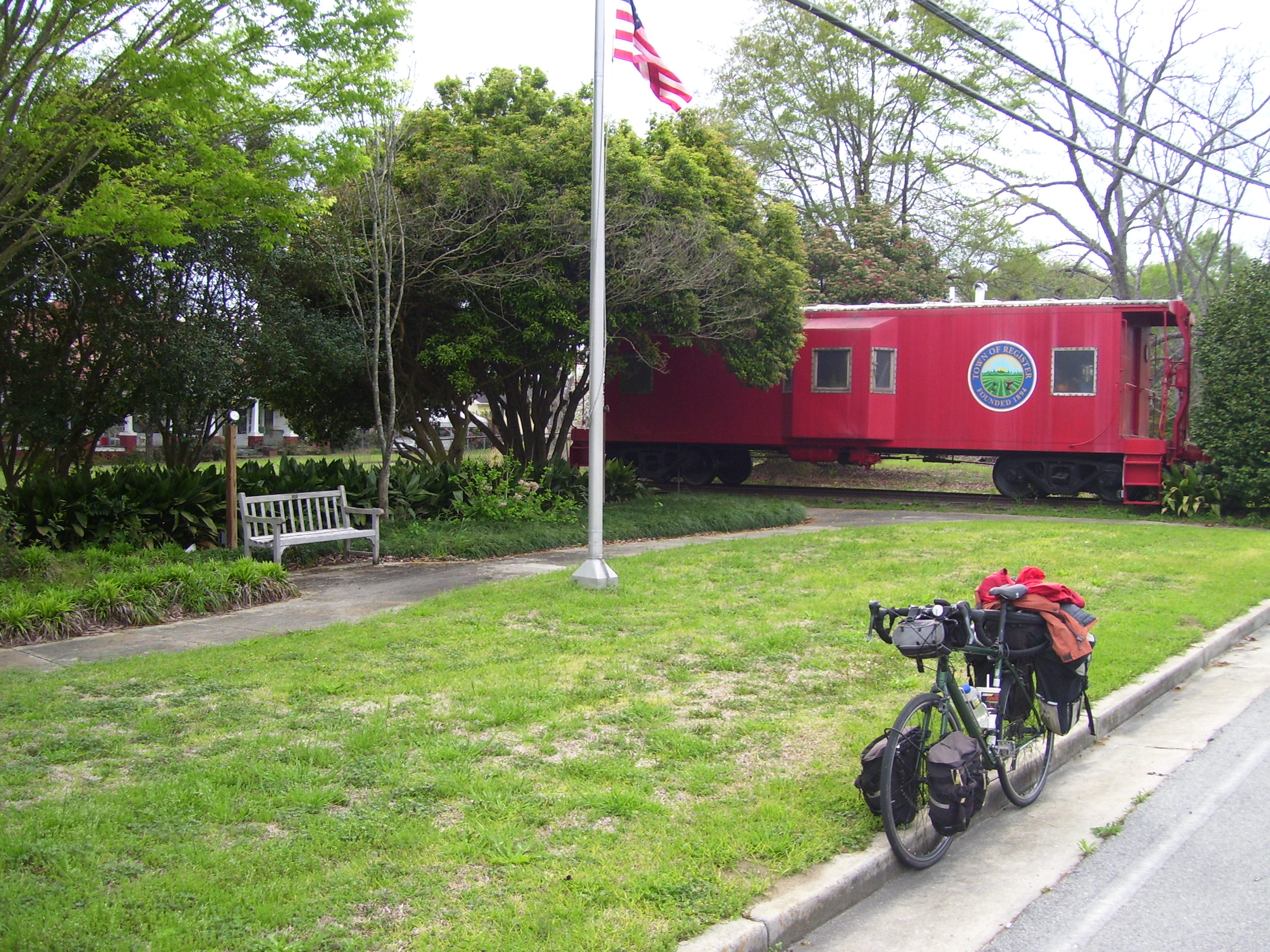 A few days ago I posted a photo of a bicycle up on a telephone pole. Here's another example, with my own bike parked underneath. I at least got an explanation for this one: the sign is advertising an adjacent antique shop. Check out the long fork on that bike...definitely an antique! 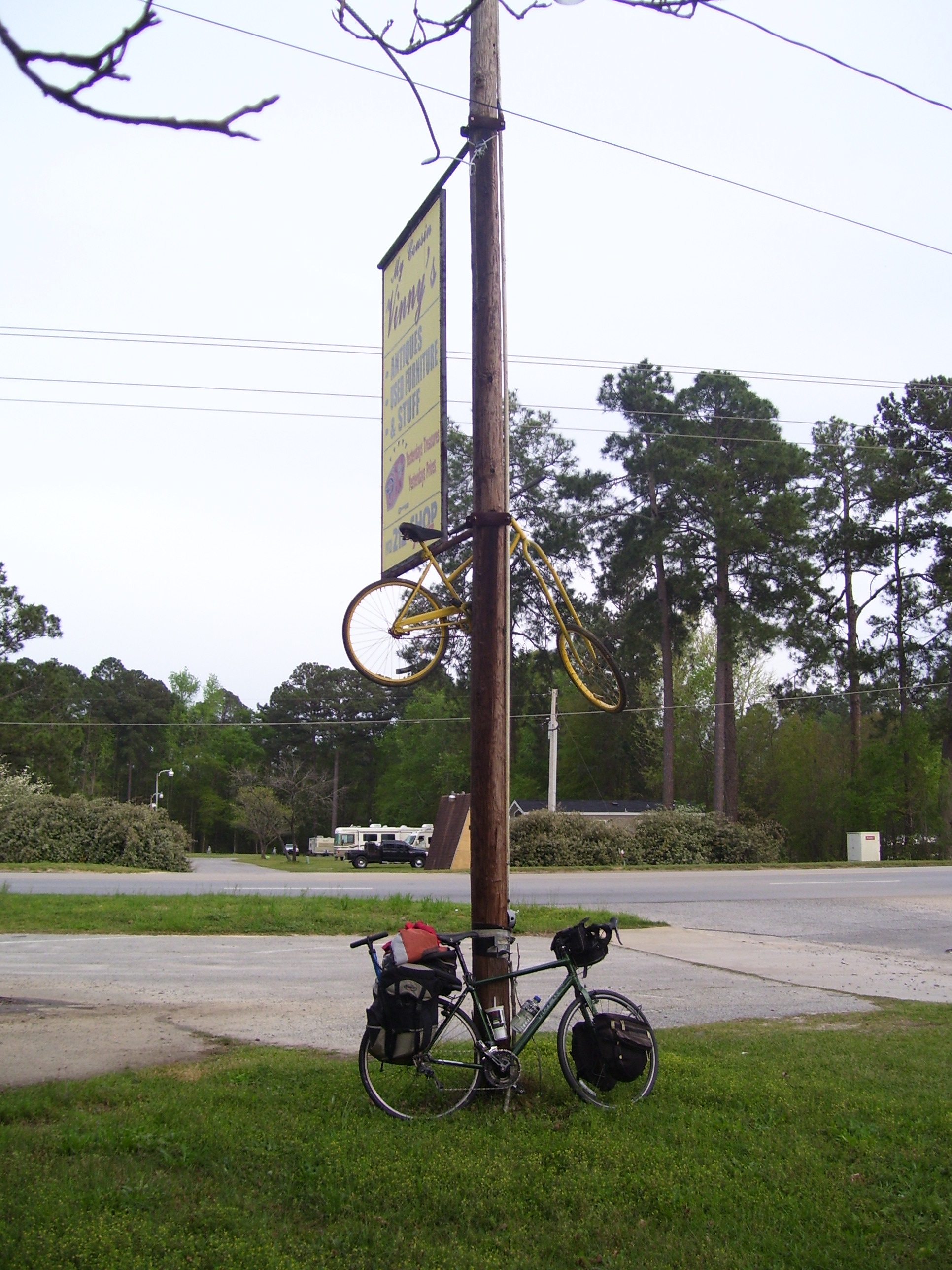 After that I just rode the next 10 miles or so right on into Statesboro and got a room at the cheapest hotel I could find, right at $30 a night plus tax. It's not the greatest room in the world, but it's the second cheapest I've found this trip. There should be only one more night in a hotel for me this trip, so I'll probably stay somewhere nicer tomorrow. Anyway, after that I rode out for a few more caches, and then stopped at Pizza Hut to order dinner. While waiting for the pizza I rode out to get a soda and happened upon one more photo-worthy place, the city hall for Statesboro: 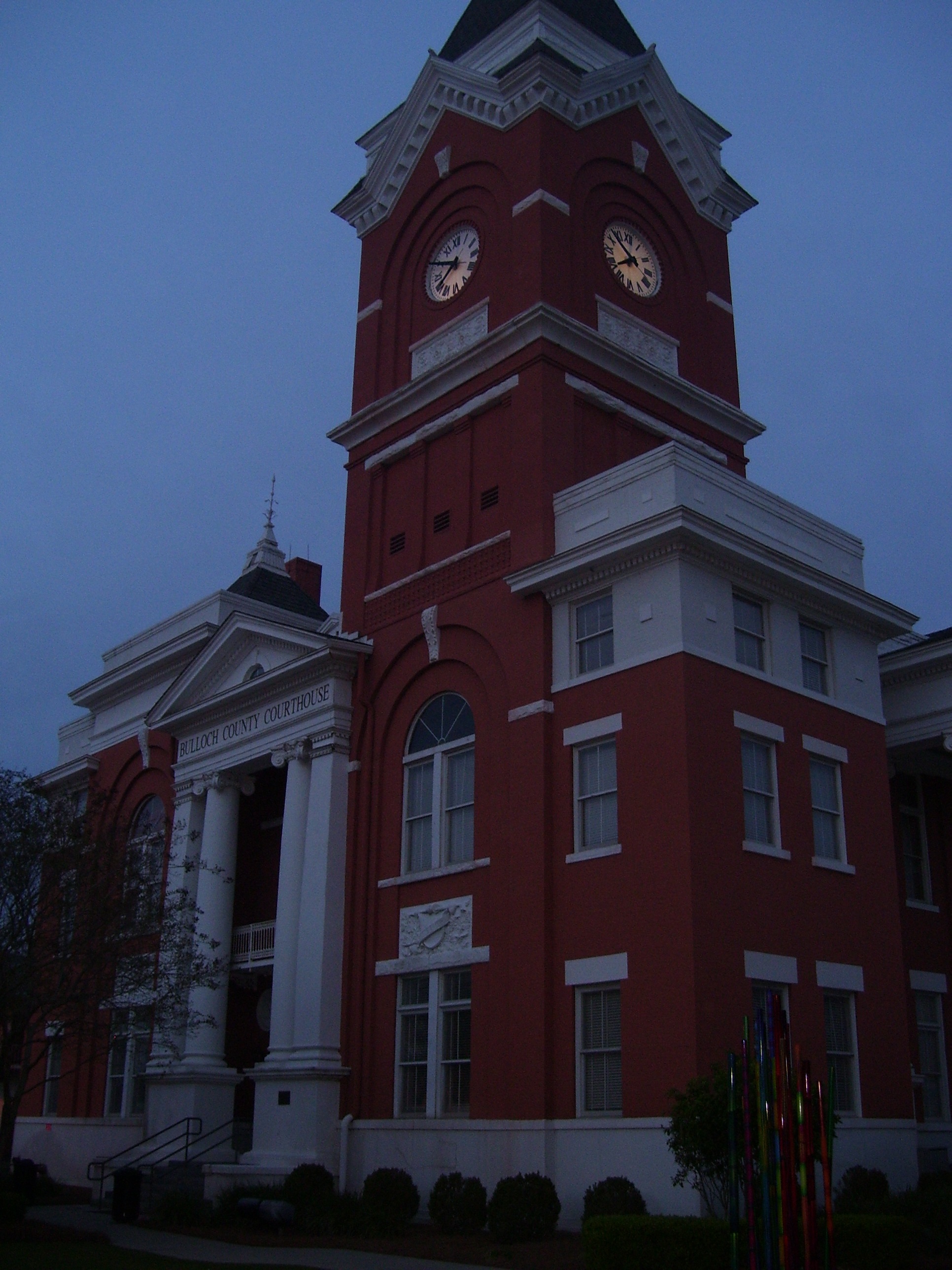 Then it was back to the room to consume my meal, grab a shower and do all my other usual late night stuff. Tomorrow I should be in South Carolina at last!