The winds and terrain maps both suggested this would be an easy day, and for the most part, it was. I certainly had no trouble with any hill climbing today, that's for sure, and only on a very few rare occasions did the wind give me any difficulties. Still, it was pretty warm and humid (mid-80s), actually the hottest day of the trip so far, which I'm not really used to. I'm certainly not complaining by any means, especially after what I had to go through a couple years ago on the east coast ride, but it was a change from how things have been so far. The level ground got boring really fast and I found myself wishing for the occasional hill just for some variety. As nice as it was to not have to fight the winds, they were too light to really push me along so I mostly just pedaled nonstop, which (as I've mentioned before) can get pretty tiring after a couple of hours.

Since I only expected to ride about 70 miles and had all day to do it, I dallied around doing a couple of time-consuming geocaches in Statesboro before moving out, and of course for my efforts I was rewarded with a flat tire...my first in probably a week. This one wasn't caused by road debris, though, but something in the tube...it might've been slightly folded or crinkled, or just wore out, I have no idea, but basically I found a split in the seam that cleary wasn't the result of foreign object damage. I figured that tube, which had several patches in it already, was done for and replaced it with a new one (the first new tube I've installed since Arizona...every other flat since then has been patched). Because of that and the extra-long caches, I didn't leave the Statesboro area until noon, quite a bit behind schedule.

However, with almost no caches to find the rest of the way, and no real sightseeing opportunities, I had nothing else to do but ride, so that's what I did. Here's the road at the start of the day...lots of trees, no shoulder, and what shoulder I did have I couldn't use because of those stupid rumble strips, which I think I've had about enough of, thank you very much. 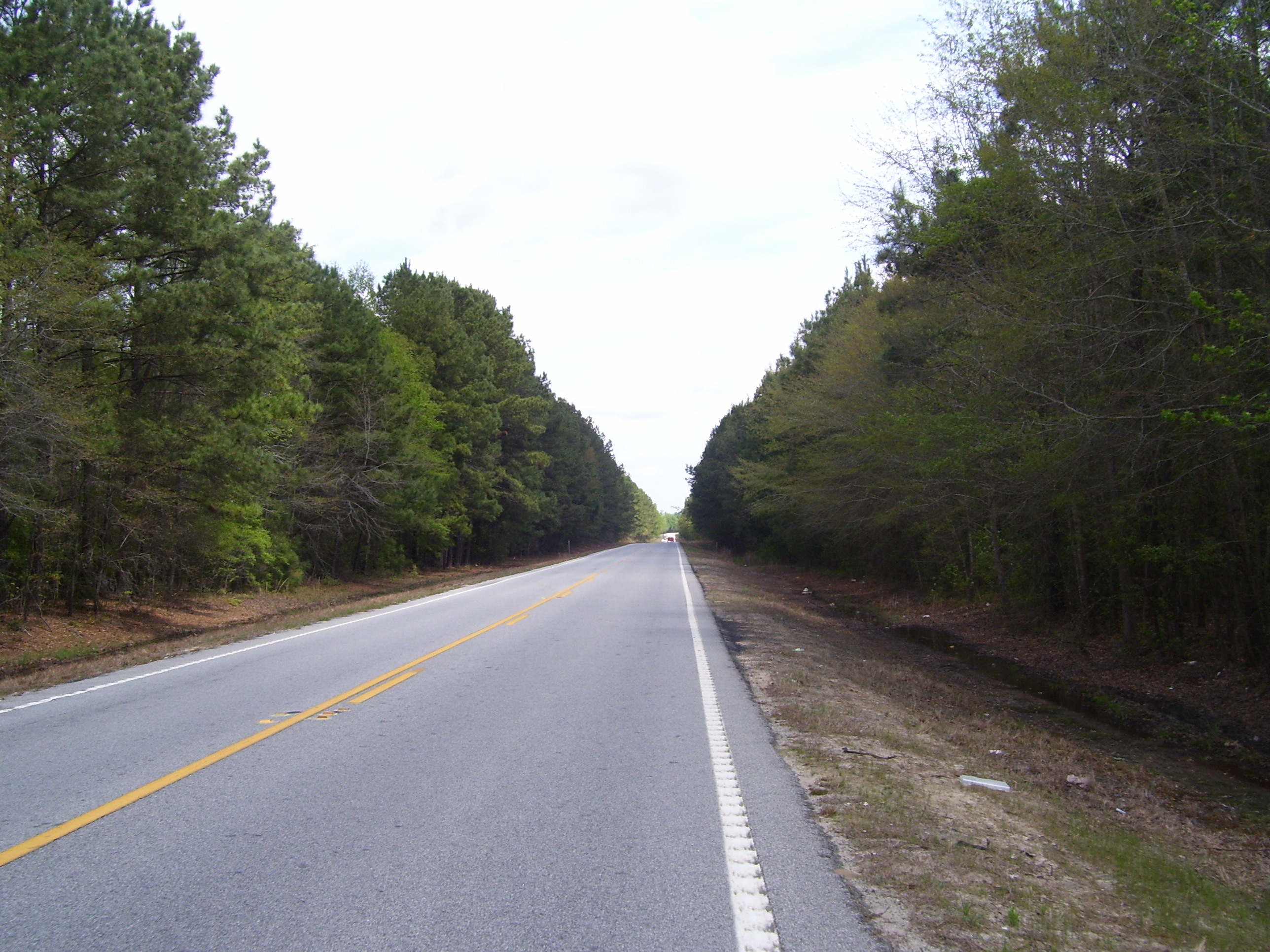 I tried to take a better shot of the trees as I passed by, simply because they look so cool like that all close together and ready to be farmed, but I guess the camera slipped slightly and it's a tad blurry. Sorry about that. 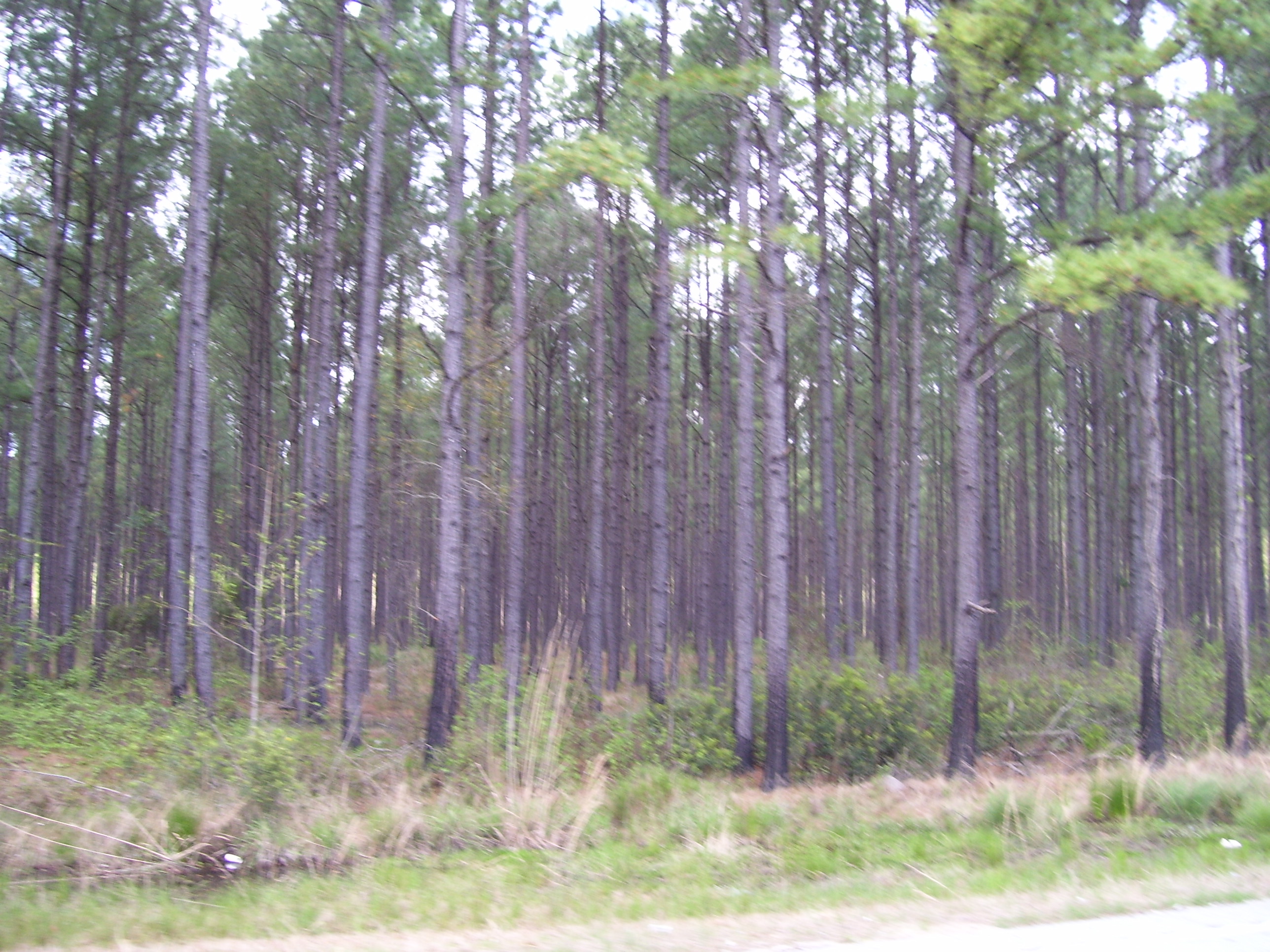 This is where I had lunch, literally the only place with food I saw the entire day until about 5pm. By the time I reached this lone oasis, it was almost 2 and I was really super hungry. At least it was cheap, and the guy that worked there said he saw cross-country cyclists come through all the time (probably because, like me, they couldn't find anyplace else to get a snack). Interesting side note: That box by the front door has live chicks in it for sale. Gotta love these country convenience stores! 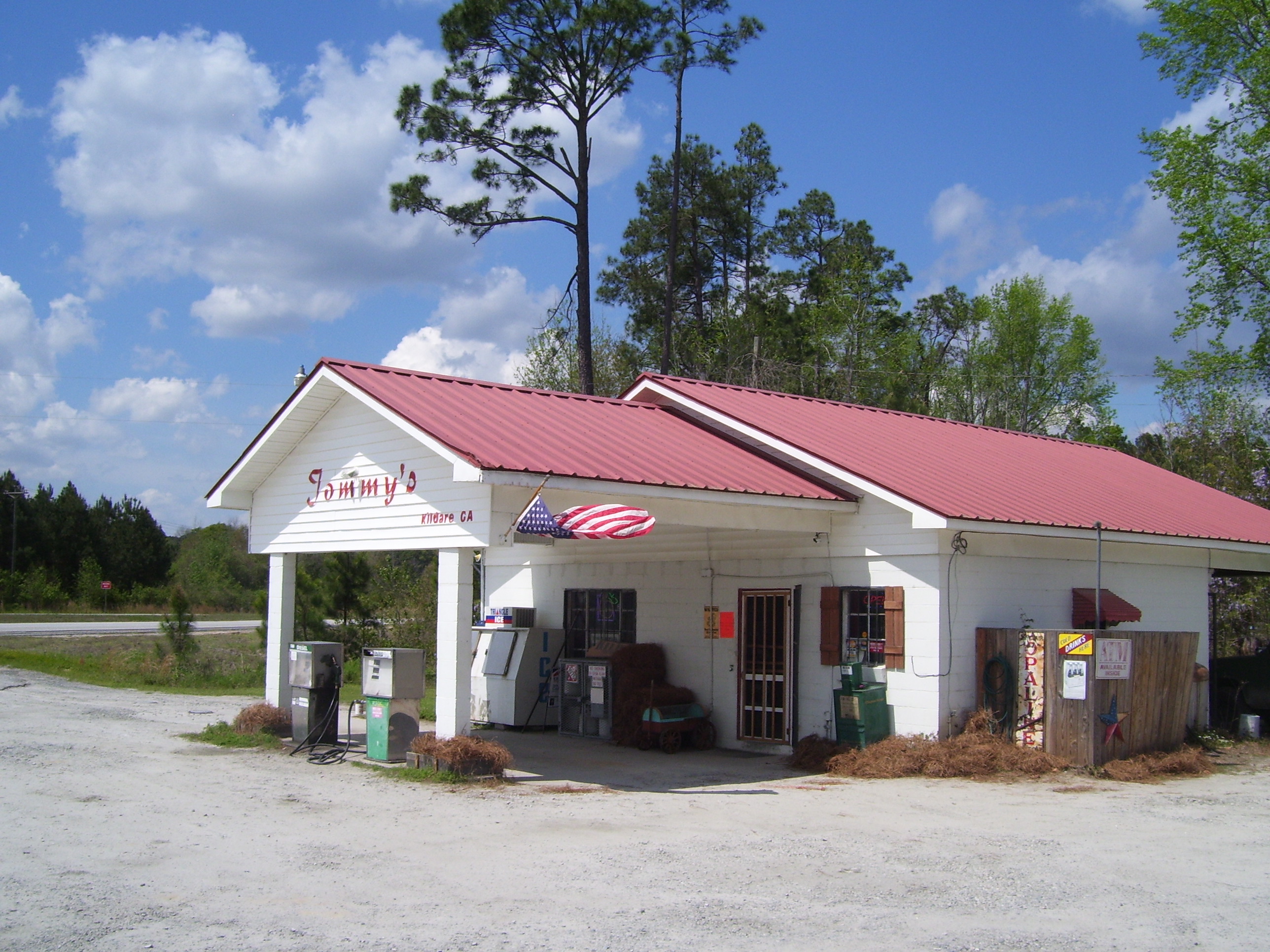 After leaving there I headed for the South Carolina border, and the road wound through some pretty scenery for my last few miles in the state of Georgia: 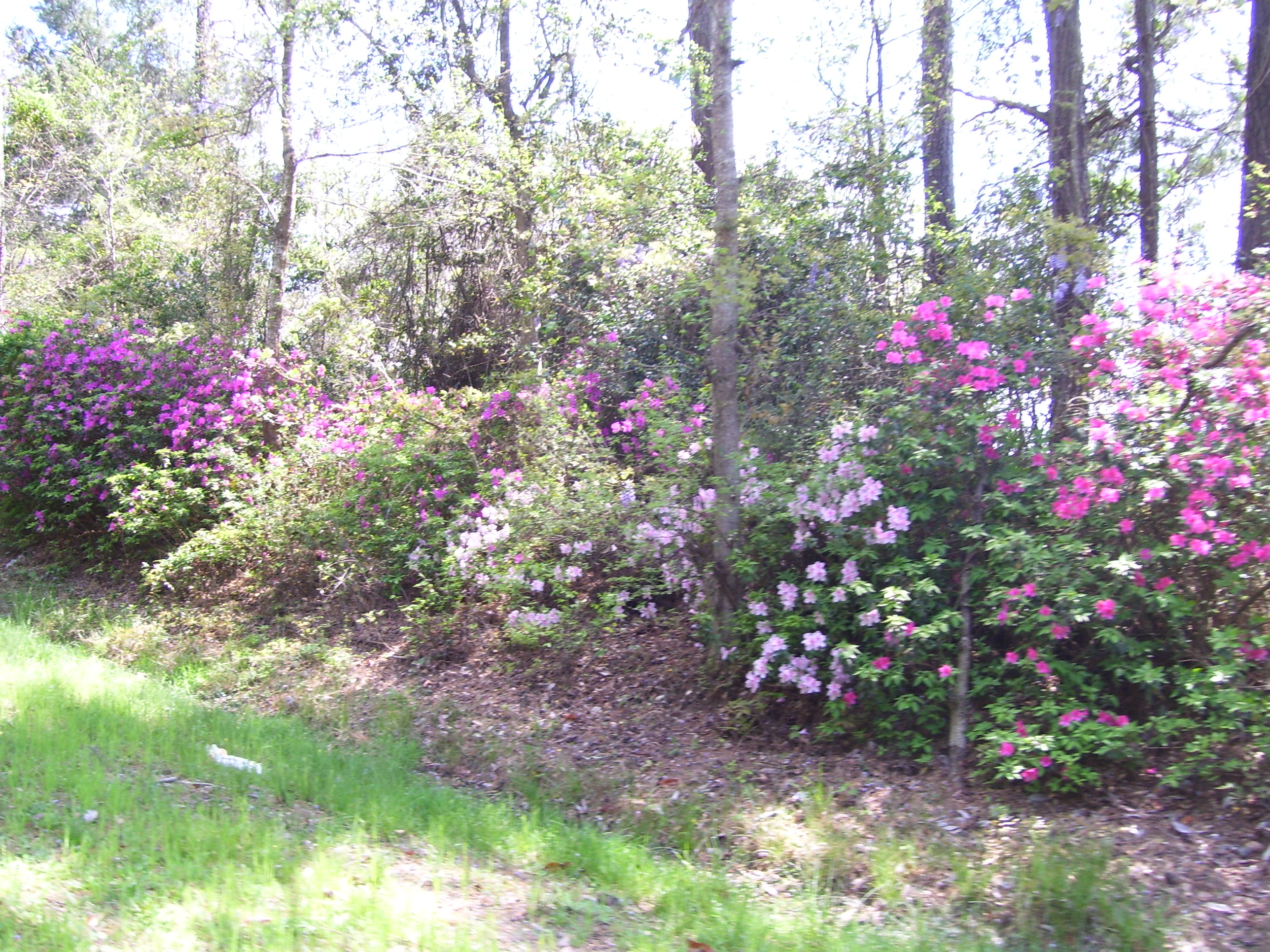 One last amazing house to look at: 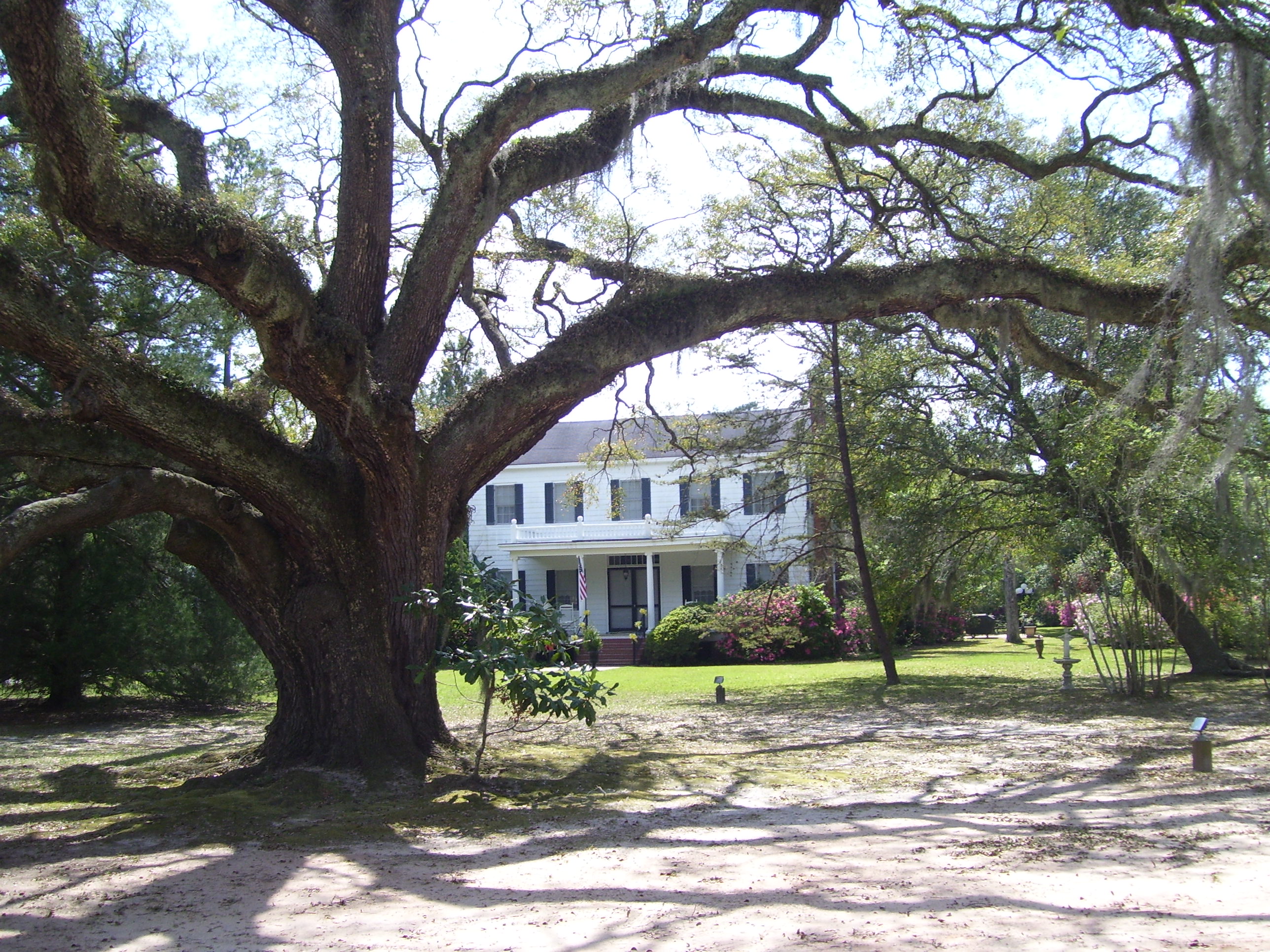 And one final random historical marker: 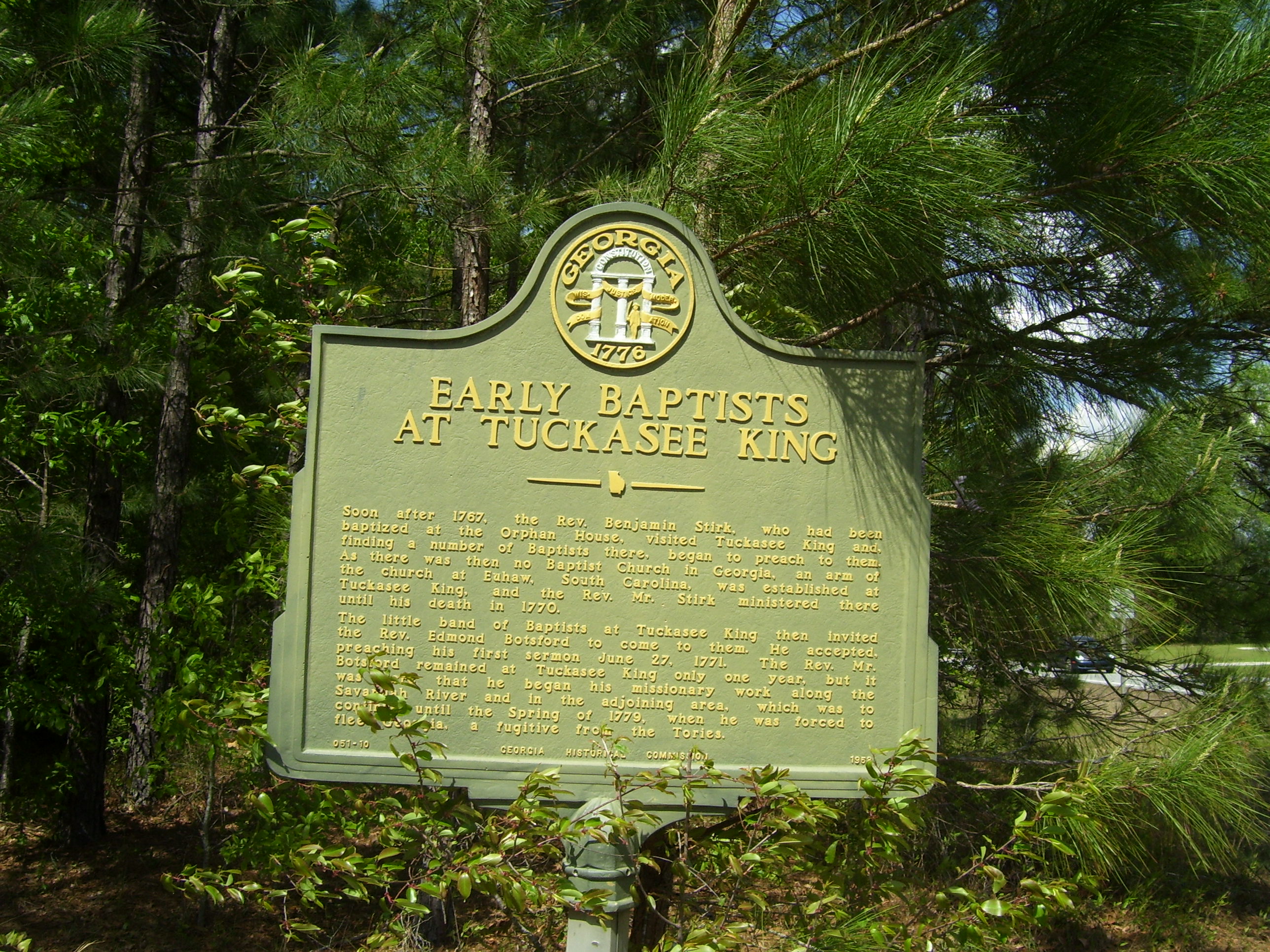 That marker was less than a mile from the Savannah River, which marks the border between Georgia and South Carolina. Sadly, there was no "Welcome" sign as I entered my next and final state for this trip, so this photo will have to do. 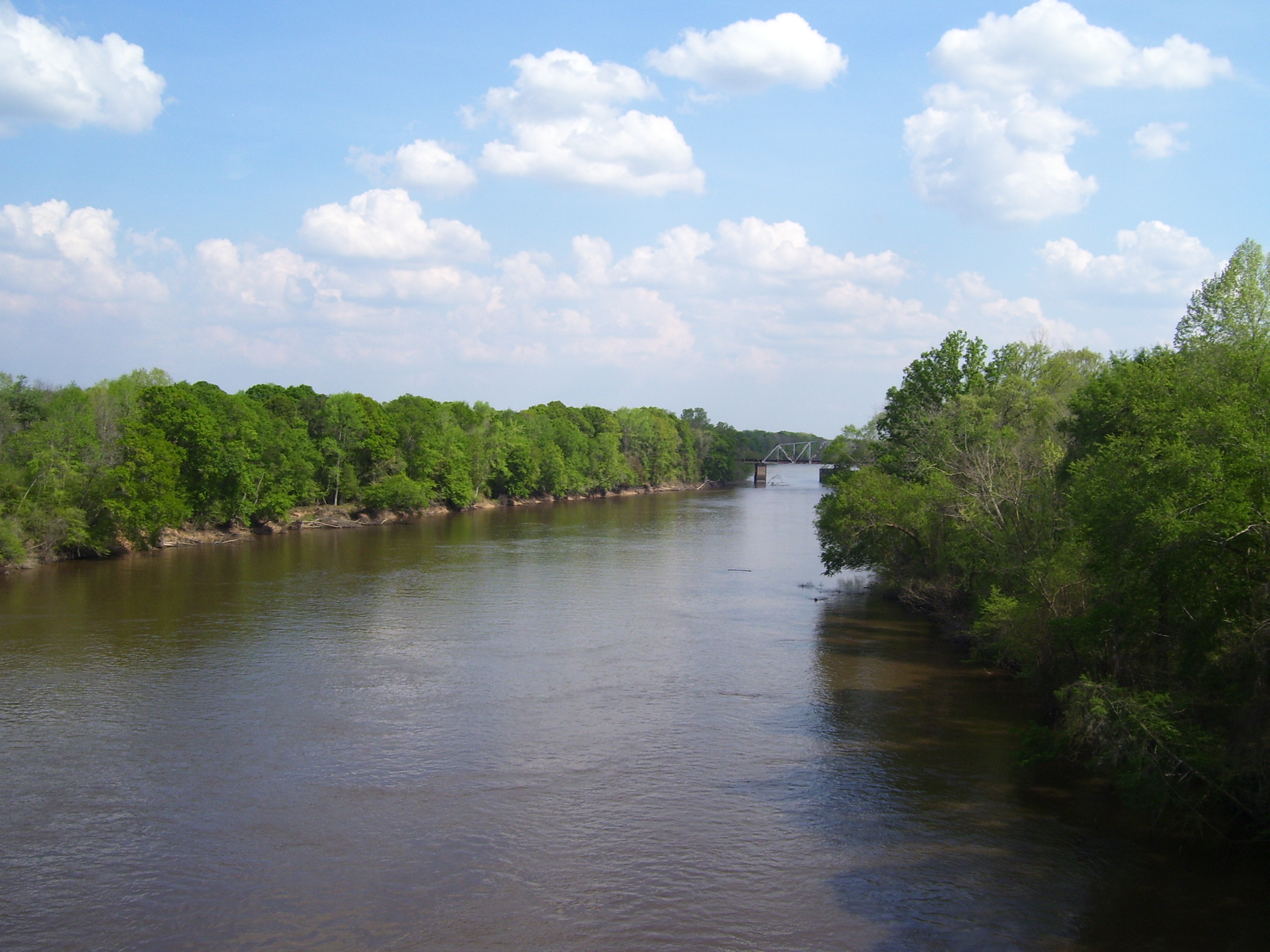 South Carolina's roads weren't in much better shape, and no rumble strips this time, but they did have little raised bumpy things to watch out for. Fortunately this lovely stretch of road had almost no traffic. 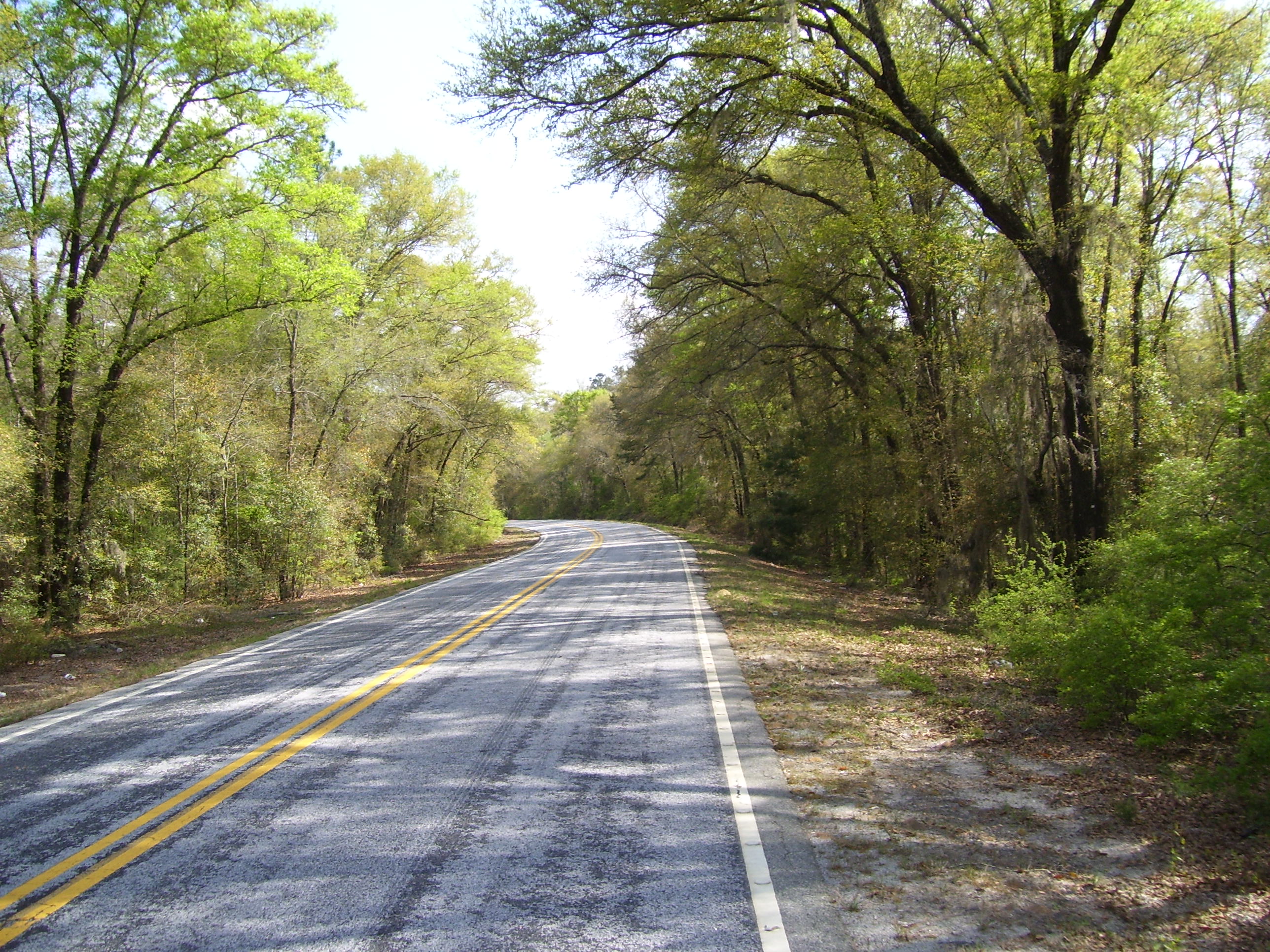 See what I mean by lovely? Added bonus, the shade made it noticeably cooler here than earlier in the day. 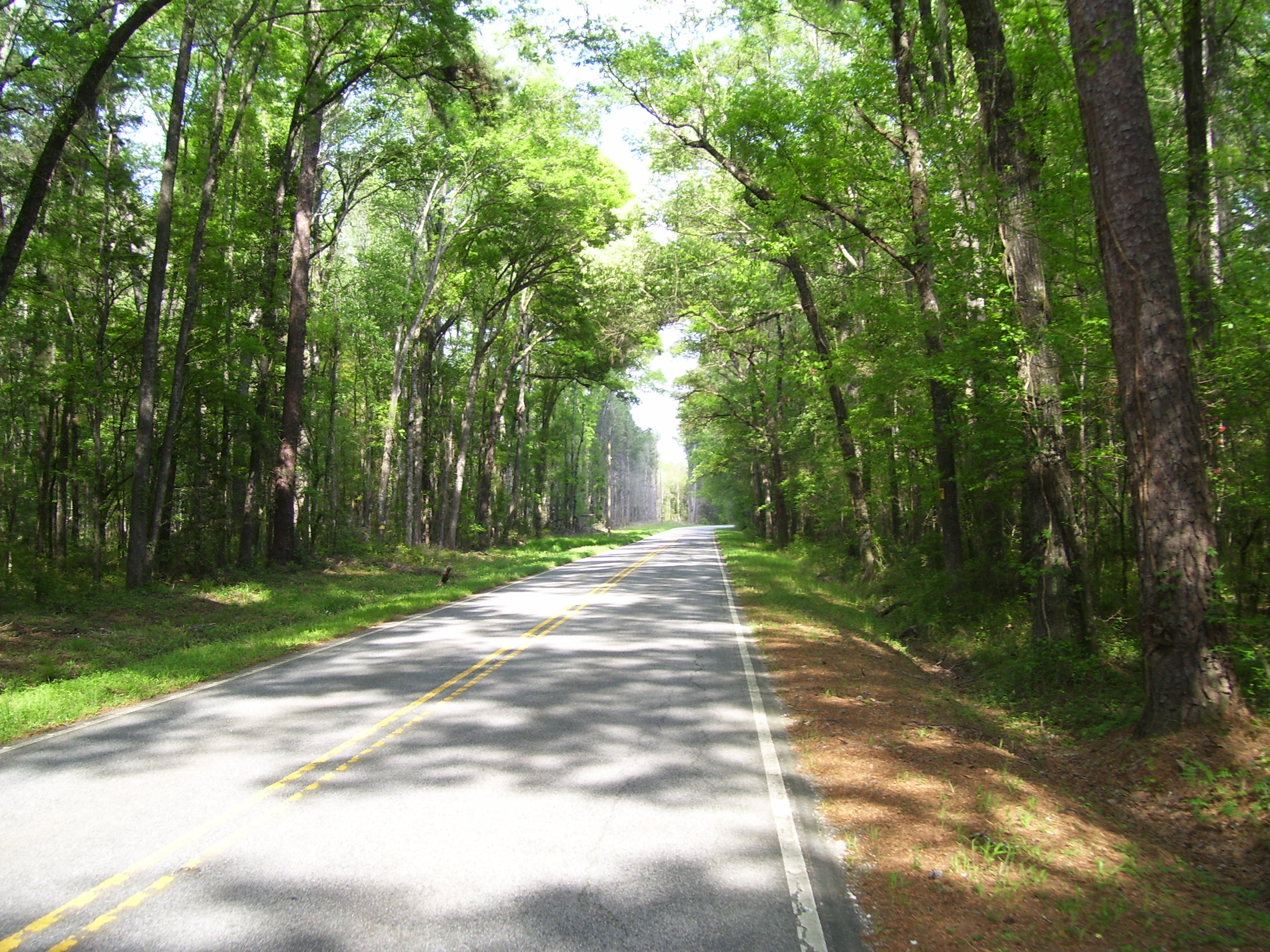 I soon arrived in Ridgeland, where I encountered this historic church: 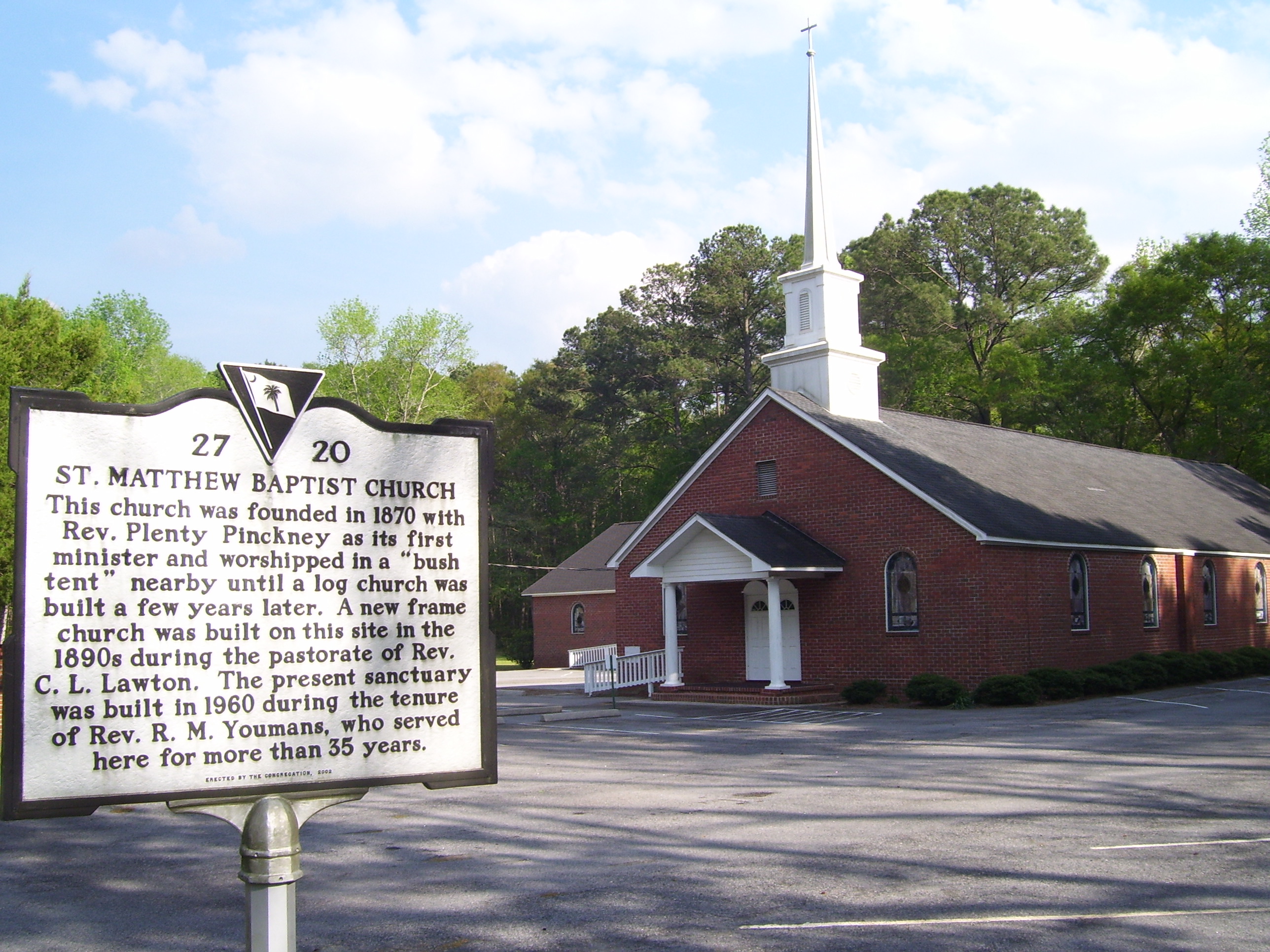 And another great southern town hall: 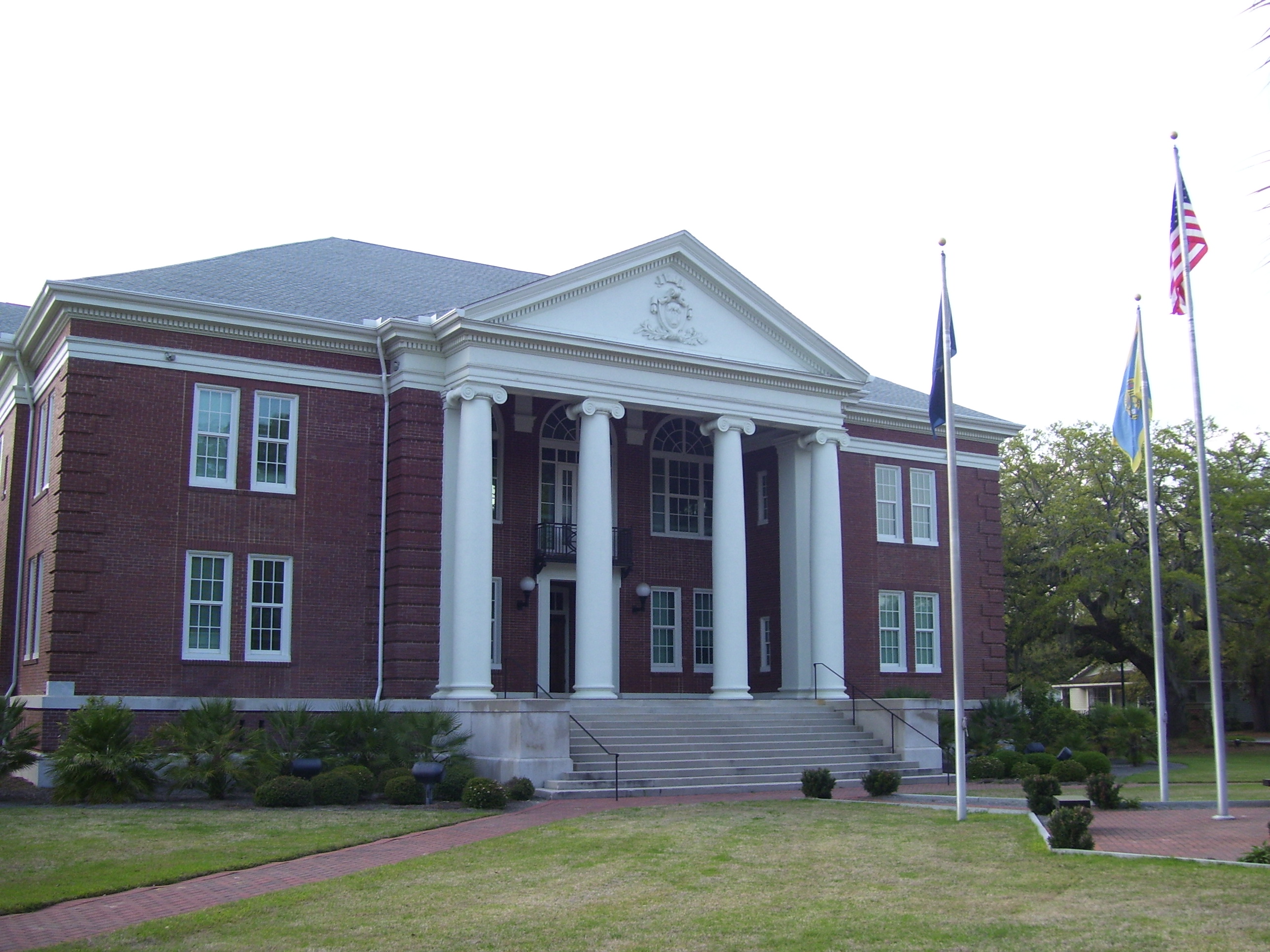 Leaving Ridgeland, I headed along a route I've used before...namely, the stretch of US-17 from Hardeeville to Charleston, where I rode during my east coast tour a couple of years ago. In fact, here's a link to the actual page where I did that particular bit of riding. Why is this important? Well, when I did it last time, I traveled along a frontage road which suddenly ended in a right turn that led me off track quite a ways. In the text I laud my (at the time brand-new) GPS for saving me from a lot of panic and backtracking, and instead showing me another way that eventually put me back into contact with US-17.

That was all well and good at the time, but today I couldn't just keep on riding to Charleston, as it was much too far away. Fortunately for me, as I followed my GPS along and started down that frontage road, I suddenly remembered that whole experience from the last tour, and stopped in my tracks. Both Google Maps and my GPS were trying to route me alongside I-95, all the way up to exit 33 where the hotels were in Point South...but I knew that wouldn't work, because I tried it once before. So I pulled out my iPad, loaded up the map and zoomed in close to see what was going on. Well, it turns out, there are actually two frontage roads, one on the left side of the highway, and the other on the right. As you travel up US-17 it continues on over to the right side, which is what I did back in 2012 that screwed me up. Instead you have to cut across before you even get near that crossing, and then take the left-hand frontage road, which goes all the way along I-95 instead of suddenly ending. Why they built the frontage roads with such a dramatic difference, I have no idea. I'm just glad I figured it out before I made the same mistake twice! It's funny how sometimes an experience like this can come in handy years later when you least expect it...I had no idea I'd be riding through that same trouble spot again, and yet here I was.

So anyway, I went back and crossed over, then rode on the left side for a while. This is what it looked like...note all that traffic over there on I-95, slowed to a crawl, and it was like that for miles. You'd think it was Friday on a Spring Break weekend, or something... 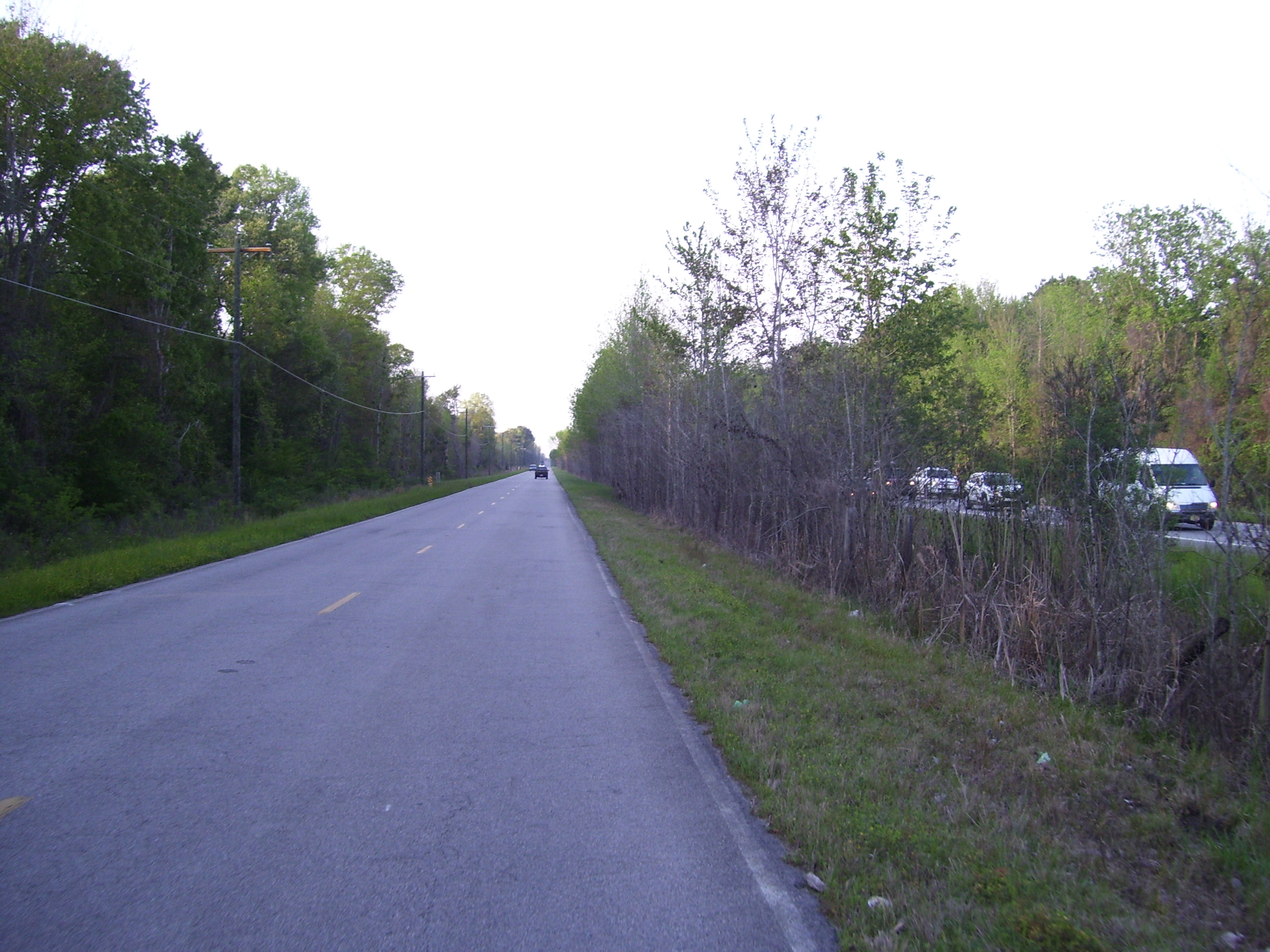 Those people would've been better off on the frontage road. Hardly any traffic here and the speed limit's 55, too.

Anyway, I continued on and the frontage road eventually took me right to the block of hotels, where I picked a Knight's Inn (the first one I've seen in weeks) for my last night in a hotel this trip, had dinner and prepped for tomorrow's final leg of the tour. My dad drove down yesterday and is staying with friends in Charleston, so when I finish tomorrow he'll be there to pick me up. It sure is a load off knowing I don't have to worry about the logistical issues of getting the bike (and myself) home from here. Of the four major tours I've done, that's only happened one time and it was something of a pain, I must admit. Just being able to put the bike in a car and drive off makes things a whole lot easier.

So that's it for the second to last day. One last thing to do...ride on in to Charleston!